This race was benefiting the SuperHero Foundation so we dressed up as Sole2Soul SUPER Sisters!!! So much fun!!!

The weather was extremely humid so it was difficult to run. But I am proud of myself that I met my goal! And the best part...Andy and the boys watched me cross the finish line!!! 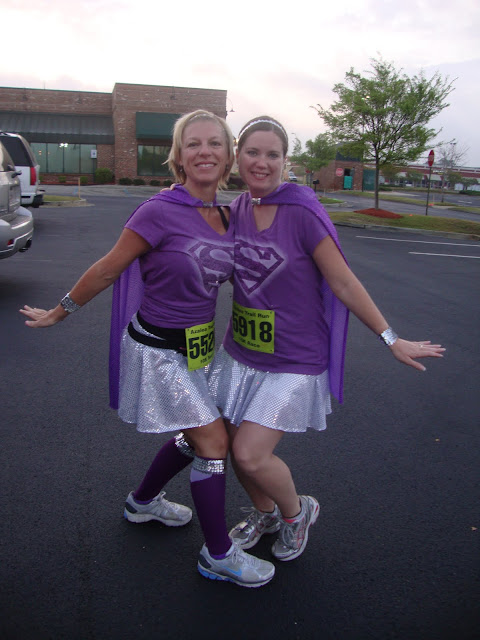 Group Shots! We had tons of Sole2Soul Sisters running this race!!! 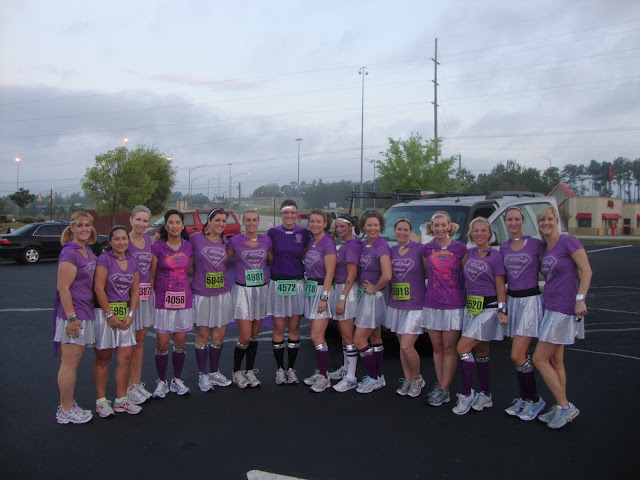 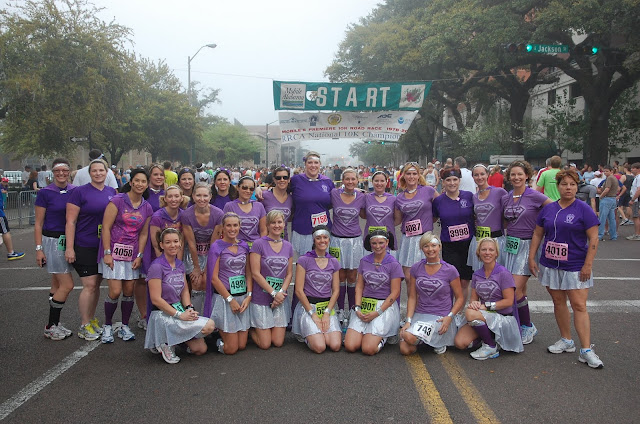 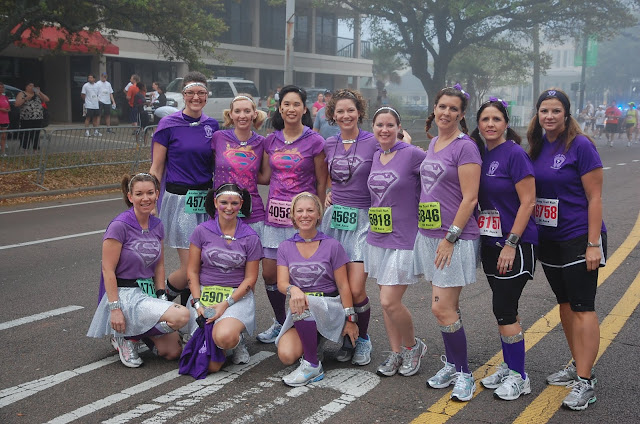 Me and my sweet family at the finish line!!! 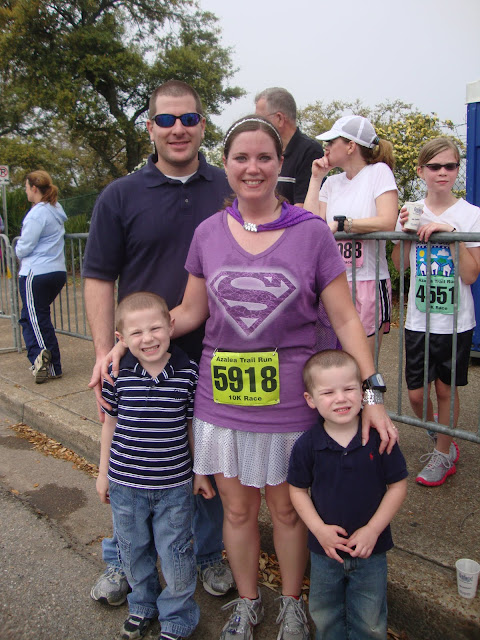 4 Miles With the Girls!

I had another awesome run this morning! It was a little windy but the wind was welcome due to the humidity making it so hot outside. We ran 4 miles in 38:39 at an average pace of 9:39! Looking forward to the Azalea Trail Run 10K on Saturday! The race benefits the Superhero Foundation so we are dressing up as the Sole2Soul SUPER Sisters!!! Gonna be soo much fun!!!

Ran a really hilly route this morning! It actually felt pretty good! Wasn't sure if I would have a good run since my legs are still pretty sore from Sunday's 12 miles but it turned out to be an awesome run and workout! Really felt those hills in my quads and glutes lol! It is the first time in a long time that I was so sweaty after the run that it felt like I had just stepped out of the shower. I ran 4 miles in 39:29 at an average pace of 9:52!!! Not too bad on hills!!! Happy Day everyone!

12 Miles Under the Supermoon!!!

Awesome run and awesome moon! It was gorgeous out there! I had a great run...the first few miles my legs were wondering what I was doing but after I found my groove I felt like I could have ran forever! Love runs like that! If only I could have these kinda runs on race day lol! I ran 12 miles in 1:58:39 at an average pace of 9:53!!! Woo hoo!!! AND...I was leader of the pack today!!! There were 13 of us running today...I am so blessed to have awesome friends to run with!

Please excuse the unmanicured toenails...but this is what I found when I took my shoes off after the run. A blister! It doesn't hurt at all...and has even gone down some since this morning. I'm going to have to face the fact that being a runner hurts the prettiness of your feet lol! 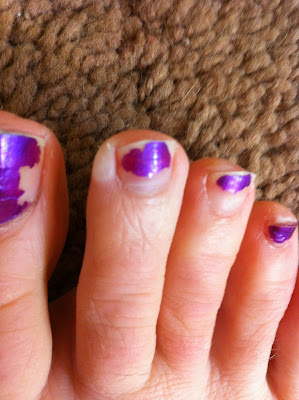 Ran 4 miles with the girls this morning! Felt great! And guess what? I was at the front of the pack today!!!! :-) We ran 4 miles in 38:42 at an average pace of 9:39!!! I have the day off today because my little one is sick with strep throat. Hope everyone enjoys St. Patrick's Day!

Got up early this morning to welcome Paige B. back to running! It's also her birthday today!!! We talked and celebrated with her a little too long so we only had time for 1 mile. I was happy with that though...my legs were sooo tired from the 10 miler I ran yesterday! And I am still trying to recover from the time change. We ran 1.14 miles in 12:07 at an average pace of 10:39. Inside joke: we all stuffed our bras and surprised Paige! Had to include the picture...it's hilarious!!! Lol! Happy Day everyone! 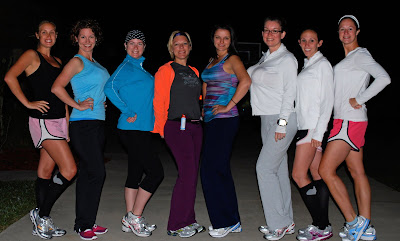 First Long Run Since Princess Half!

This was my first long run since the half. I struggled a bit with my speed but finally got in my groove. I've got another half coming up April 10th so I've got to get back into the swing of training. We had about 10 ladies running this morning! I ran 10 miles in 1:42:26 at an average pace of 10:14. I am pretty proud of that pace for a long run...but the down side is that I was in the back of the pack the last half of the run today. Usually I am in the front of the pack but everyone was going faster than me today. Oh well...I found my groove and just decided to stay there instead of trying to keep up with them. It was a great run for me! I missed seeing the sunrise this morning though...the time change made the entire run dark and foggy. Felt good to do a long run...even in the dark!

3 Miles With a Few Hill Repeats

Hill repeats....YUCK!!! But at least I did them! Got quite a scare this morning though...we were about to sprint up a hill when this pit bulldog comes running at us and growling at us in his front yard. We all stopped in the middle of the road praying he would back down. His owner finally coaxed the dog to come back inside the house. Whew! If the hill repeats didn't get my heart rate up enough, the dog sure did! So glad we were all safe! Still had a great run! We ended up running a total of 3 miles in 30:34 at an average pace of 10:11.

Felt great to run this morning! I haven't ran since last Thursday. The past two weekends have been crazy busy for me...Disney Princess Half the weekend before and Women at the Cross retreat this past weekend. I am ready for life to slow down a bit. I had a great run this morning! It was a little windy and cool but that didn't matter because I so needed to feel my feet on that pavement today! We ran 3.51 miles in 35:36 at an average pace of 10:07. Happy Mardi Gras to everyone!

Got to run with SOME of my girls this morning! Missed a few of them! We ran a different route this morning. It was hilly but the change was nice! I think my quads are going to be sore from those hills though! Soreness is good! We ran 4.16 miles in 40:42 at an average pace of 9:47! Not too bad for my first run since the half!!! Going to the Women at the Cross retreat this weekend so I won't get to run again until probably Tuesday. Gonna miss it! Especially after this great run!

Let me start by saying...this is my FAVORITE race so far!!! It was awesome!!! I am defintely going to try to run this one every year! The expo was fun but we got there late so I didn't get to shop as much as I wanted to...although that is probably a good thing lol! I attempted to go to bed at 8:00 the night before race day because I had to wake up at 3AM in order to catch the buses that took us to the race. I did NOT sleep well at all. My mother-in-law (bless her heart) was snoring like crazy and it kept me awake. And I was so excited too so I think that contributed to my no sleep too. I woke up ready to run though. I ate a bagel (instead of my normal banana) and started dressing up in my Minnie Mouse attire. Finally we made it on a bus (after waiting in line at our resort for about 15 minutes). When we got there we had to walk about 20 minutes to the start line..so that was my warm up! We had to be in our corrals by 5AM...race started at 5:45AM. I was sooo excited to be in corral A...I got to start first! They had tons of entertainment while you were waiting to start. Then the fairy godmother came up and counted off our start which was sooo cool! Not sure if they fired a gun to start or not...because I was too busy watching the fireworks! I've never had fireworks at a start line before!!! Finally I was running! And thinking that I couldn't believe I was actually running my dream race! The first 2 miles we headed down the main drag towards the Magic Kingdom. I was running at a pretty decent pace! Before we hit mile 3 we saw a pirate ship from Pirates of the Carribean and a huge hot air balloon of Spaceship Earth! So cool! I stopped and took a picture with some of the Disney men and princes! Had to take that one of course lol! Then I came upon the entrance to Magic Kingdom...I will always remember what the Disney cast members said as I ran through the entrance, "Welcome to the Magic Kingdom! Watch out for the speed bump!" Lol! That made me laugh! Miles 3-5 were basically in the parking lot. We had to run up and down the hill under the water bridge which was pretty tough. But there was a DJ on top of the bridge playing awesome music and then when you reached the top of the hill there were guys jumping on a trampoline! What an incentive to get up that hill lol! Finally we were running down Main Street towards Cinderella's castle! There were tons of spectators cheering you on as you ran down Main Street! We turned right at the castle and ran through Tomorrowland. I stopped to take a picture with Cinderella and Prince Charming and then I ran through the castle! That was sooo awesome! Tons of spectators were cheering us on as we ran out of the castle! We turned right and headed toward Frontierland. About this time, I stopped at a porta potty...good thing about being in corral A...no lines for the porta potties AND barely any lines (I think the most were 3 people in front of me) for the character picture stops. Then I headed out of Magic Kingdom towards the golf course and the Grand Floridian Resort and Spa. Miles 7-8 blurred by and then we were back on the main drag heading towards Epcot. I passed the pirate ship again (and this time stopped to take a picture) and the hot air balloon. At mile 10, I stopped and took a picture with the green army man from Toy Story! He was hilarious...he had a microphone and was shouting orders at us to run, pick up speed, etc. At around mile 11 they had a huge television screen set up so you could see yourself running by! I was starting to hit a wall around this time...and then I see some hills I have to go up. I made it though! Reached mile 12 in the Epcot parking lot. And then we were finally running through Epcot and around Spaceship Earth which was awesome! Finally I reach mile 13 and knew I was almost there! I ran through the finish line towards Mickey, Minnie, and Donald Duck! My official time was 2:27:13!!!! That is a new PR for me...which amazes me because I made all those stops for pictures!

Here's a few pics of my GORGEOUS medal!!! 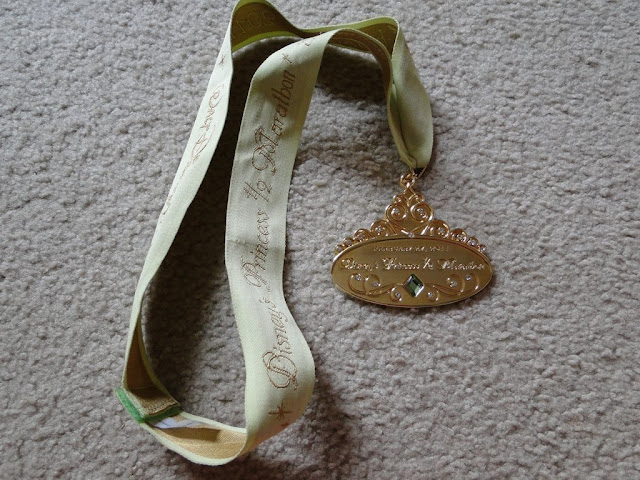 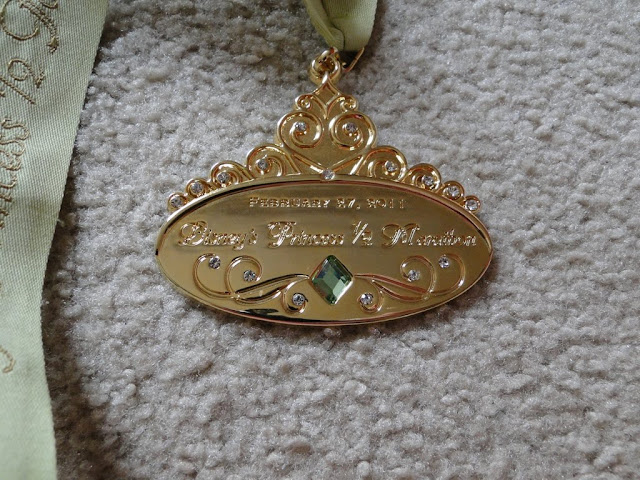 And since I took sooo many great pictures...I uploaded all of them to Walmart.com. I couldn't pick just a few to share on here so you get to see them all lol! The pics include our time at the parks too plus race day! Enjoy!

I'd like to share my Walmart Digital Photo Center photos with you. Once you have checked out my photos you can order prints and upload your own photos to share.