Sooo...of course I have to start at the beginning! And it begins with the 8 hour drive to Savannah. I caught a ride with my friends Gina and Angela. We left at 4AM because we knew we had to make it to Savannah in time to get our race packets before the expo closed. The drive was pretty uneventful...we had a great time sharing stories and just girl talk! Here's us at the Waffle House in Marianna, FL...where we stopped for a carbing up breakfast! 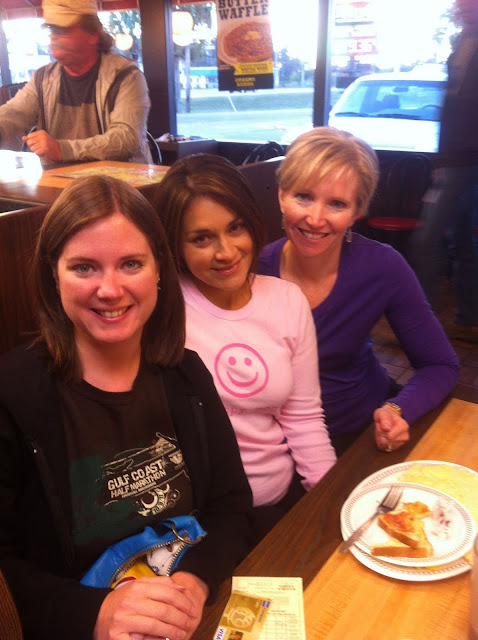 We finally made it Savannah, checked into the hotel, grabbed lunch at Marco's Pizza, and then headed to the Expo. And that's where we got stuck for about 45 minutes in traffic trying to get to the Expo. Once we finally made it inside, the fun began! We picked up our race packets and began the runner's dream shopping spree! I ended up buying two shirts and a bondi band! Here are a few pics from the AWESOME Expo!

Took a picture while we were stuck in traffic right outside the expo. Loved seeing this Rock 'n' Roll trailer! 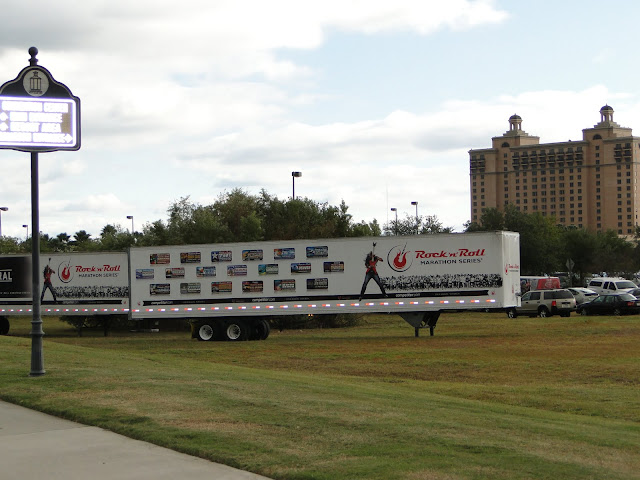 The city of Savannah was so welcoming! Everywhere we looked they had signs welcoming the runners! We felt so special!!! 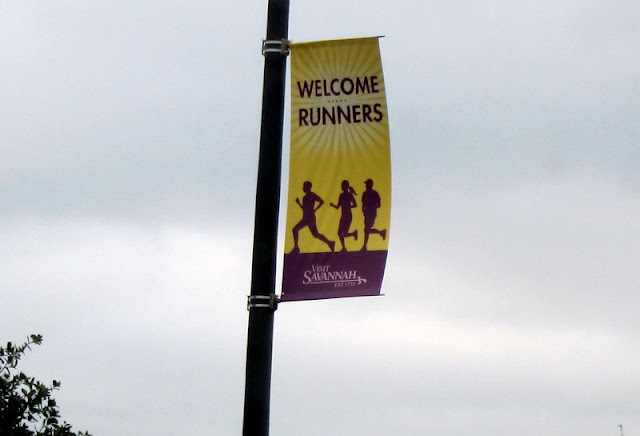 Going in to the expo: 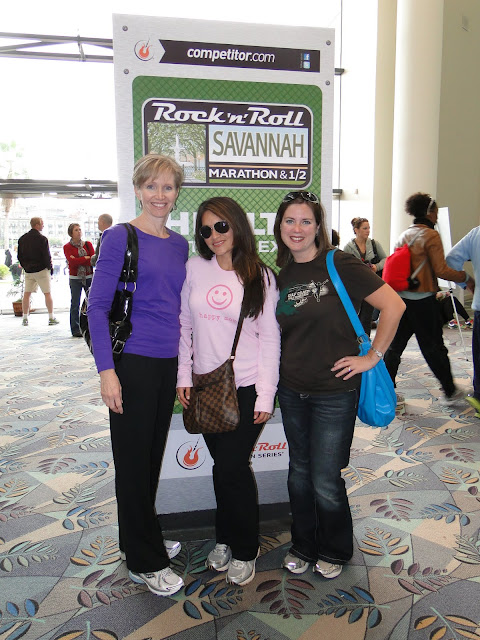 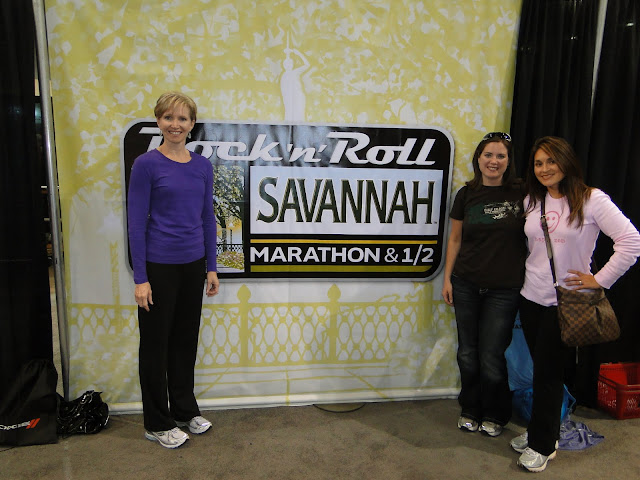 And one of the many things I like about Rock 'n' Roll Marathons...the fun picture poses!!! As you can tell, Angela and I had a lot of fun with this! Gina...not so much lol! 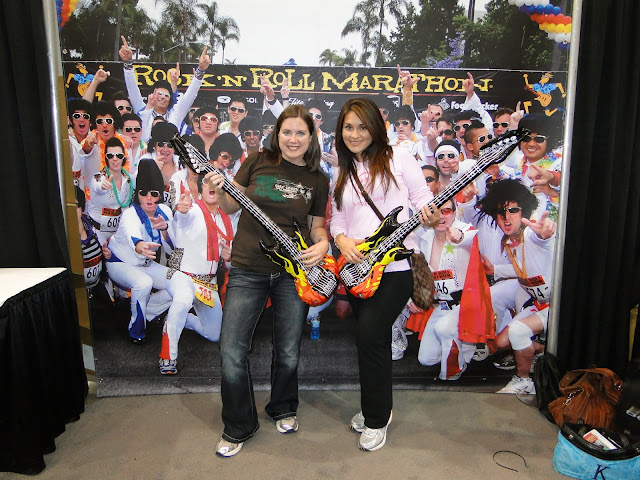 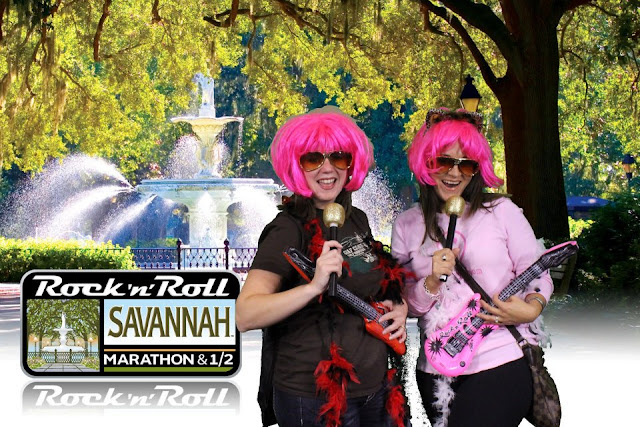 And I always like to get a picture by these runner mannequins! 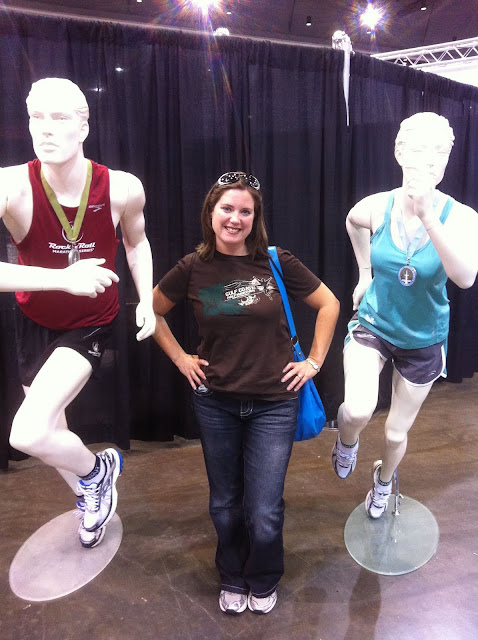 Probably the coolest thing about the expo was meeting two former contestants from The Biggest Loser, Dan and Jackie! Remember them? 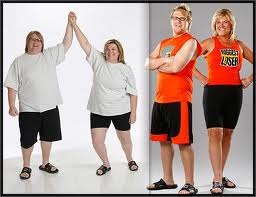 They were super nice and even though they had a line of people waiting to talk to them they talked to us for a long time! And yes...we got our picture taken with them!!! 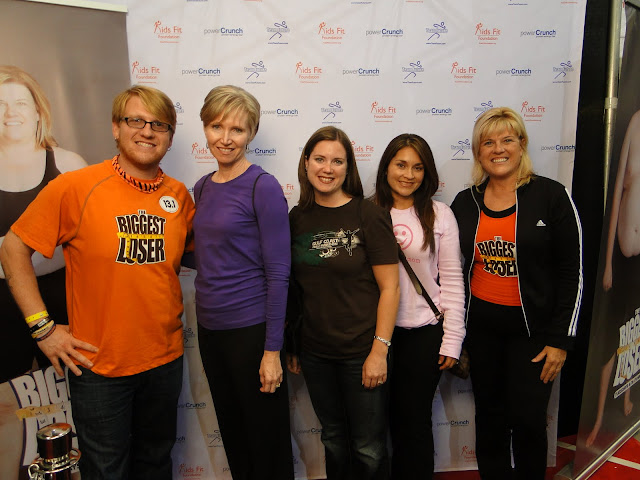 The race shirts we got were AWESOME!!! 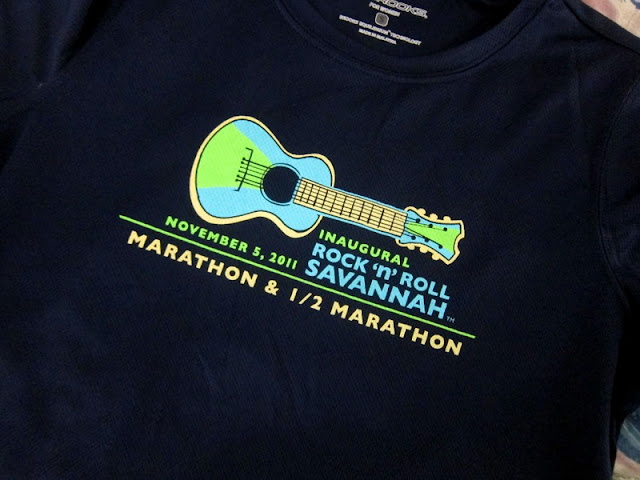 After shopping, we stepped outside the convention center and took a few photos with Savannah in the background. It is a beautiful city! 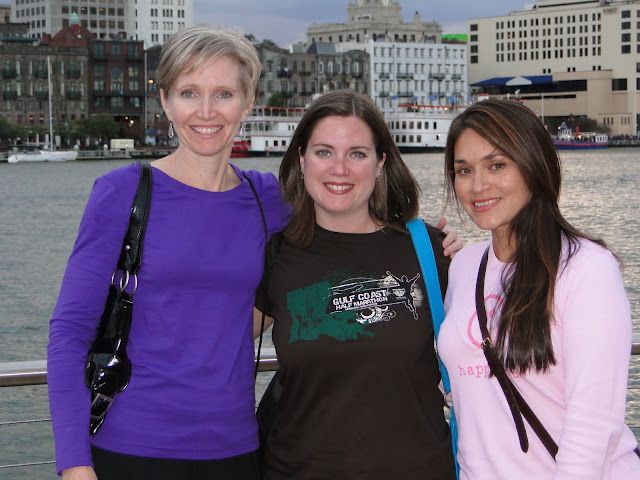 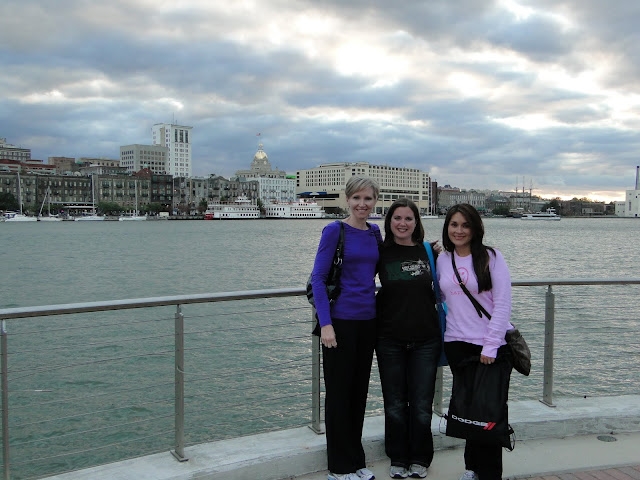 Since we lost so much time being stuck in traffic, we missed out on eating dinner with the other girls. We were supposed to go get food and meet in our hotel lobby so we could all eat together. Unfortunately we didn't make it back in time so we just grabbed Subway (my favorite) to eat in our room. And here's where Paige and I FINALLY caught up with each other! I had been missing my bestie! She rode up the day before with the other girls. So we had a mini reunion in the hotel lobby lol! After eating, we went back to our room and started getting everything ready for race day. 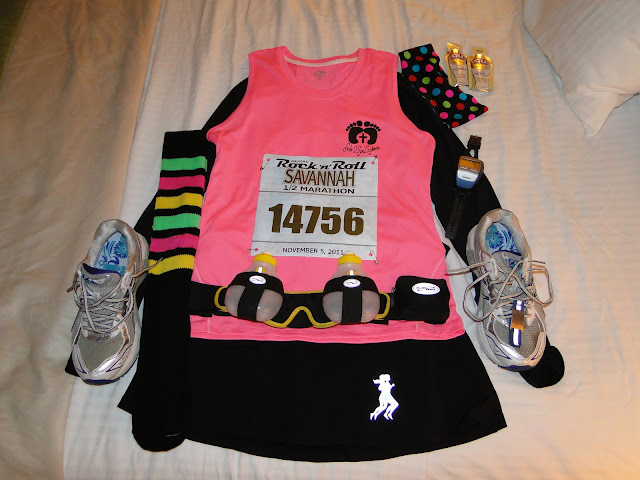 After a pretty good night of sleep (although I've come to the conclusion that I am way excited before a race...my heart was pounding and it took me a while to calm down and go to sleep) it was FINALLY Race Day!!! We got up at 4:30 AM and got ready. We were leaving the hotel at 5 AM to head to Savannah Mall where we would catch the free shuttles to the start line.

Here's Paige and me! I was so excited for her...this was her first marathon!!! 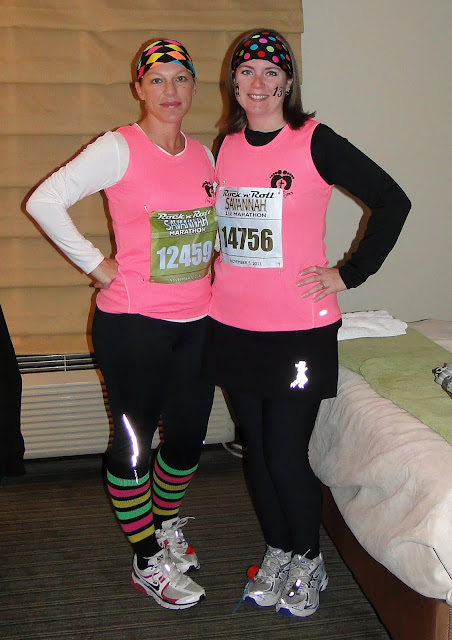 Here's a few of us in the lobby before we left! 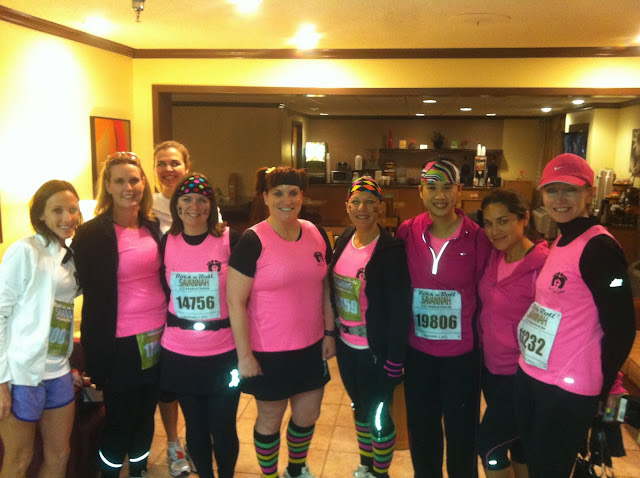 We made it to Savannah Mall and had to walk what seemed like a mile to get to the shuttles. It was FREEZING!!! The weather was so cold...we knew it would be perfect once we started running but hanging out in it was no fun! We finally got on the shuttle (which was a good old school bus from Jacksonville, FL) and a trip that should have taken around 10 minutes turned into 45 minutes! But at least we were warm. We finally made it to the start line (after walking some more) and it was hoppin'! Loud music was blaring...you could feel the energy! It pumped us up!!! Luckily, a few of our girls were staying at the Hampton Inn and our corral was right in front of it! So we were able to go to their room, use the bathroom one last time, and stay out of the cold for a bit. Finally it was race time! We shed our emergency blankets (I HIGHLY recommend these on cold race days) and waited for our corral to start moving. Finally, we were off!!! My goal was to stay with Paige until we had to split at mile 11 (this is where the half and full course split). I wanted to be with my bestie as long as I could! We were running well and reached about mile 1 and what did we see ahead of us? A bridge...which meant a hill. We couldn't believe we already had a hill to get over! But we did it! After the hill we turned a corner and saw some garbage trucks lined up on the side of the street and the workers were standing there cheering us on! It was awesome! And Paige (being the awesome girl that she is) grabbed one of the woman's hands and pulled her and said "run with us!" It was hilarious!!! I think Paige made her day!!! We saw sooo many people cheering us along the way! It was great! We DID run in the ghetto part of Savannah but those people were the ones that seemed to be cheering the loudest for us! It was so awesome! And that doesn't even count the entertainment that Rock 'n Roll had in store for us! There was a band at every mile and the race crew were awesome! At one point along the course, the race crew were gathered around another man who was dancing! They were cheering him on and us too! So much fun! It made the miles pass by so fast! Around mile 10 I saw the pacer for finishing the half in 2:30. We passed her. I told Paige I was going to try to finish right under that. We had a few more hills along the course but they didn't stop me...I was having an awesome run! Around mile 10.5 there was a hill and Paige stopped to walk and said she would catch up to me. I slowed down some but ended up not being able to find her. So I just decided to go on. I knew we were about to split at mile 11 anyway. But it saddened my heart a little because I had so much to say to Paige before we split...I wanted to tell her how much I believed in her and how proud I was of her. The course turned and I could see runners on the opposite side of the road from me. I looked for Paige and we finally spotted each other so I was able to shout a few things to her. That made me feel a little better. So then I decided to focus on the rest of the race. I was feeling awesome...so I sped up my pace. Instead of the 11:30-12 minute mile pace I was doing, I went to a 10-10:30 pace for the last 3 miles!!! I was so proud! All my halves in the past, I ALWAYS hit a wall around mile 10 or 11 and start doing walk/run intervals. Even the Gulf Coast Half in Mandeville that I did a month ago was difficult around mile 11 but the best I had ever felt. And I ran that entire half...no walking at all. Well...Savannah was even better! I was feeling great and like I could have kept going forever! I saw the finish line and sprinted the fastest I have ever sprinted to a finish line! It was AMAZING!!! And I made my last minute goal...I came in at 2:29:54!!! Just right under 2:30! I knew Paige would be proud! :-)

After crossing the finish line and getting my awesome medal, I started to look for some of the other girls. And I couldn't find them. So I decided to go ahead and get my medal engraved. And who did I run into at the end of the medal engraving line? Laura!!! I was sooo happy to see her!!! 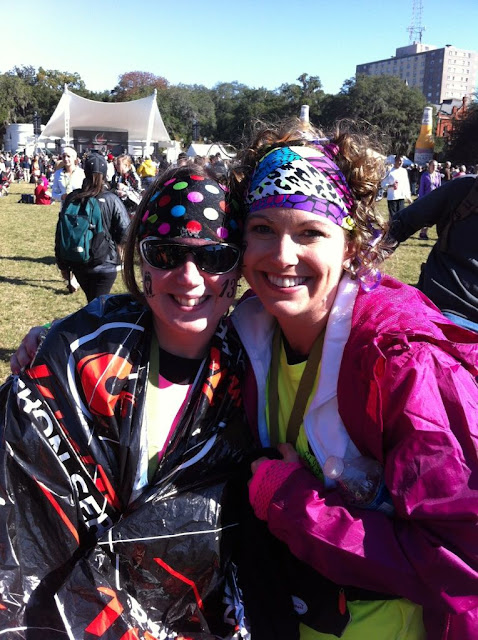 And soon after that (thanks to Laura's handy cell phone) we found Angela and Gina!!! 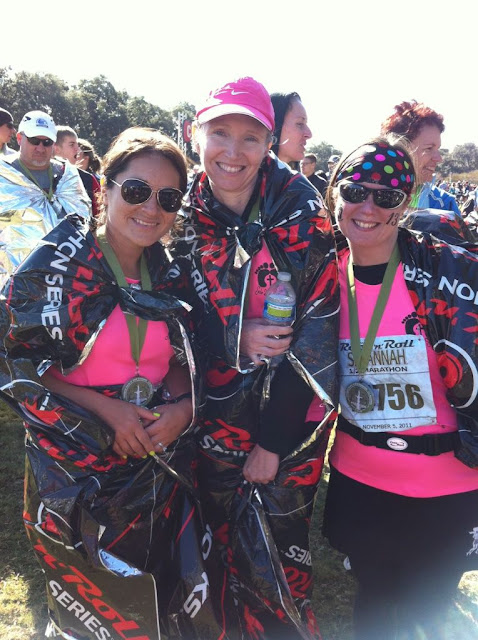 The four of us headed back to the finish line so we could watch our marathon girls come in. It was so awesome to see the runners who had finished the marathon come in. Some of them looked like they had just taken a trip to the grocery store. And then you had the ones who were limping and actually looked like they had run 26.2 miles! Luckily, all our girls looked like it had been a piece of cake! And Paige did AWESOME!!! Seeing her come across that line made my heart swell and tears come to my eyes! And the best part...she did a curtsy when she saw some of our other girls who were ahead of us and then I knew she was ok! She had a great race! And finished smiling!!! I was and am still so proud of her!!! This is Paige after running a marathon...she looks GREAT and like it was a piece of cake!!! 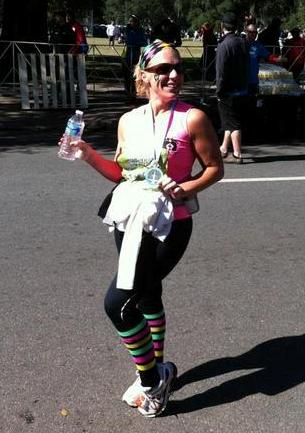 It was time to walk back to catch the shuttle. Paige kept insisting that she ran 26.2 miles and walked 13.1 to and from the shuttles lol! We were all sore but in super happy spirits! Here's me on the bus with my medal!! Thanks for the pic Paige! This girl has got to find a way to start running with my cell phone. I was lost without it lol! 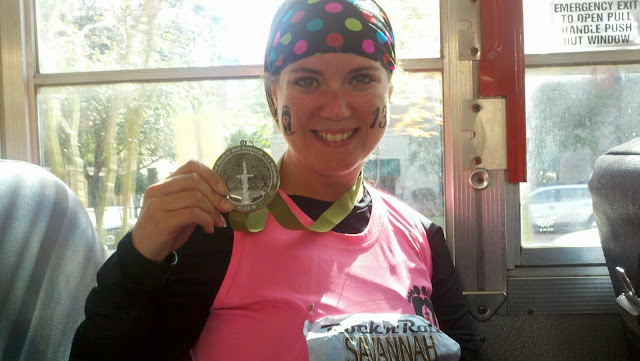 Overall, I think this was my best race as far as running goes! I felt GREAT the entire time. The only sad news is that a 58 year old man who was running the marathon collasped at mile 22 and died. According to his friends and wife, he was a super healthy eater, a great athlete, and had been training for this (his first) marathon for months. So sad! And makes me a little scared to attempt a marathon.

Ok this is now officially a book! I am going to write a separate post about our night in Savannah after the race. I am sooo glad we decided to stay in Savannah that night and not drive the 8 hour drive home after the race!!! You can read about that fun HERE. :-)