I love running local races! You still enjoy the race atmosphere but you get to sleep in your own bed! ;-) Of course I love traveling to races too! Who am I kidding? I just love to race!!!

This past weekend I ran the Senior Bowl Charity Run 10K! I've run this race 4 times! It's one that I love to run! There have been a couple of years when I missed it because I was running other races (RnR Savannah and Pensacola Half Marathon) but I love to run it when I can.

Every time I've run this race it's been pretty cold. Last year it was freezing! But not this year. It was in the high 70's with 100% humidity. And it was foggy too. So I knew that this race would be a little tougher than in the past.

I always sport my favorite football team for this race....Auburn!

I was excited that Jenny and Kirstin were running this race too! Their husbands also ran. (If you remember my hubby was at home sick with an upper respiratory infection).

Race morning we started out by taking a few pictures in front of the start line. 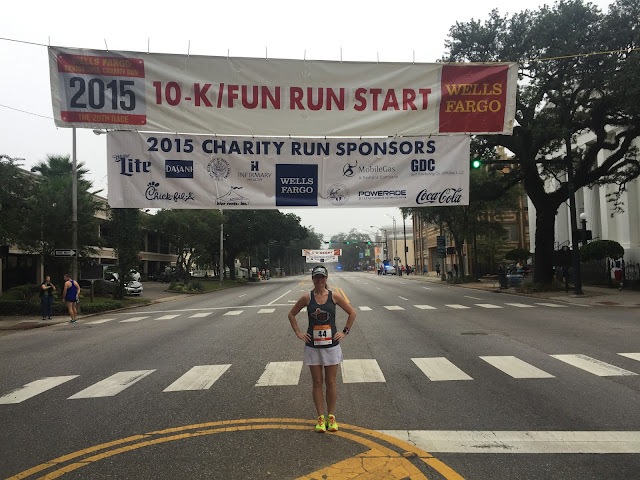 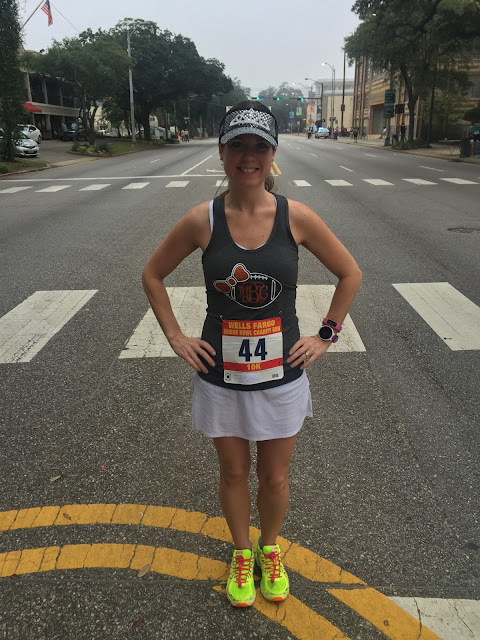 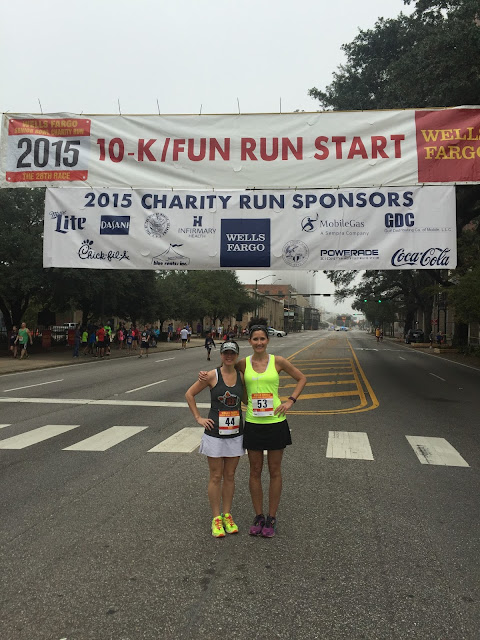 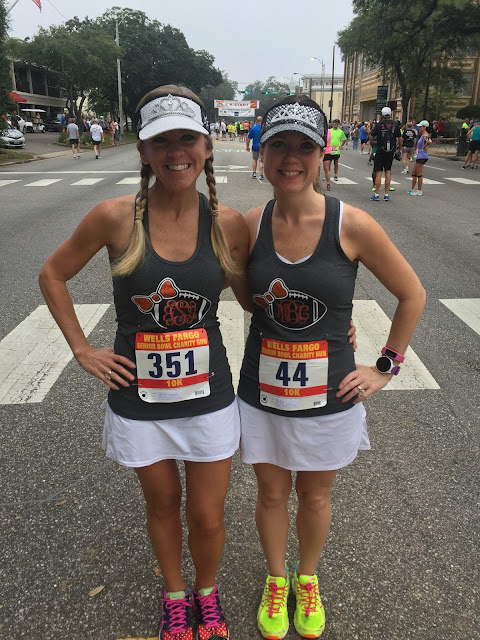 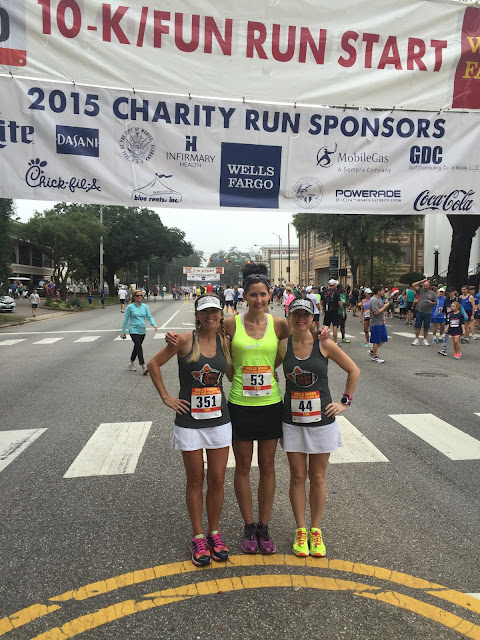 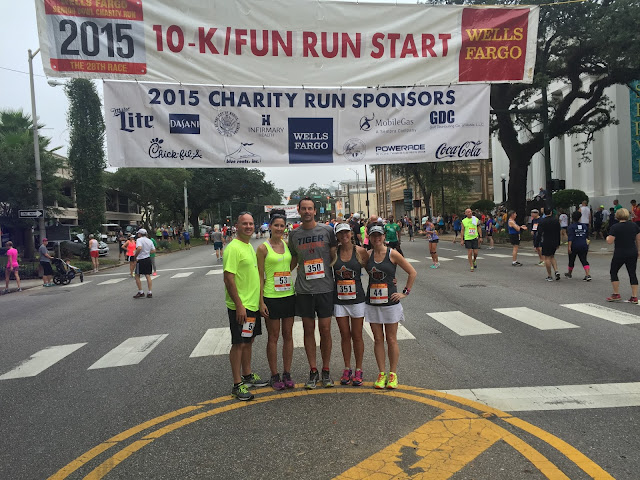 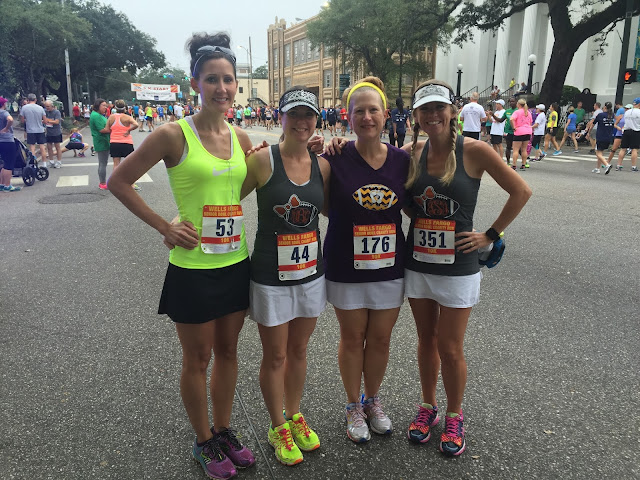 After a gorgeous singing of the National Anthem by one of my friend's 10 year old daughter, it was time to line up at the start line. This race isn't chipped timed so Jenny and I decided to get pretty close to the front without getting run over. They played music to get us all pumped up! I will admit that I was dancing and having a blast and the race hadn't even started yet lol!

A race start selfie is a must!!! 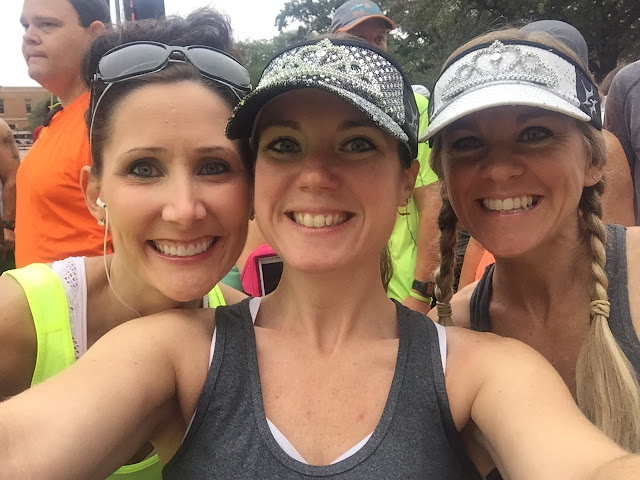 And then....we were off! Jenny and I had plans to just have fun for this one. We weren't planning on a PR especially since the weather wasn't very cooperative. But being the competitive runners that we are....we both were running pretty fast. In fact...we started out faster than we should have. The first mile flew by. And then we headed into one of the neighborhoods. I love looking at all the houses. But the roads here are not in great shape. We had to really watch where we were stepping. I almost twisted my ankle a few times.

Finally we were out of the neighborhood and turned onto Dauphin Street where we would run until we reached the finish line. I'm not gonna lie. This run was tough. My legs felt great but I was having a hard time breathing. The heat and humidity were making it really difficult.

Looking at my Garmin I knew I wouldn't PR. But there was a chance for Jenny to PR. We were almost at the finish line and I wanted to yell at her to "Go!" but I couldn't! I couldn't get my breath enough to talk! Luckily she went took off and went for it! I was a few paces behind her and then out of the corner of my eye I saw someone creeping up on me. We will call him "Red Shirt" since he was wearing a red shirt. I thought to myself, "Oh no! You are NOT getting between me and my Jennyfren!" And I sprinted the hardest I think I've ever sprinted!

Thanks to Jenny's husband Eric for these pictures! You can see Red Shirt trying to pass me...and me determined not to let him! 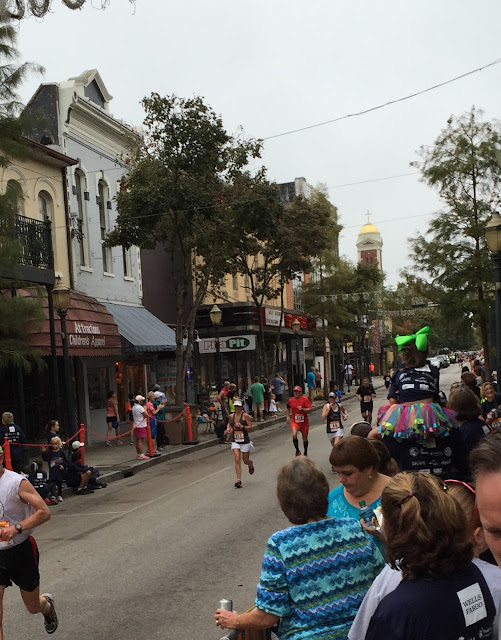 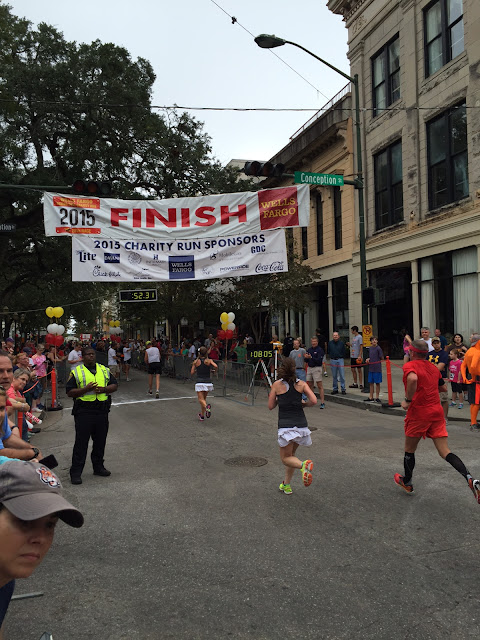 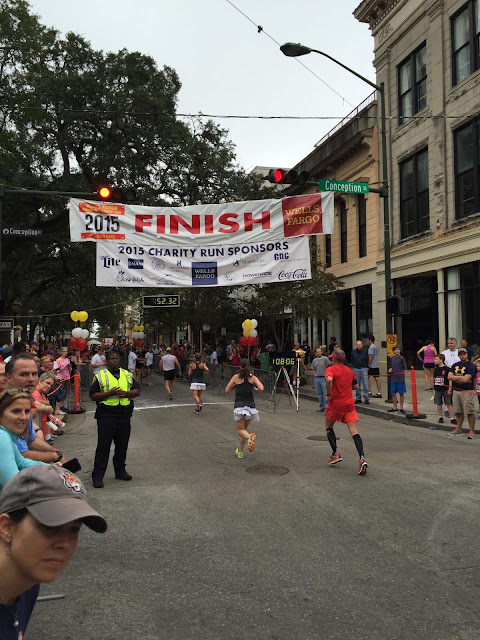 But sprinting at the end in that heat and humidity was rough! It took me a while to catch my breath. I was about one minute shy of my 10K PR. Not too bad in such weather conditions! I found out later that my official time was 52:34! 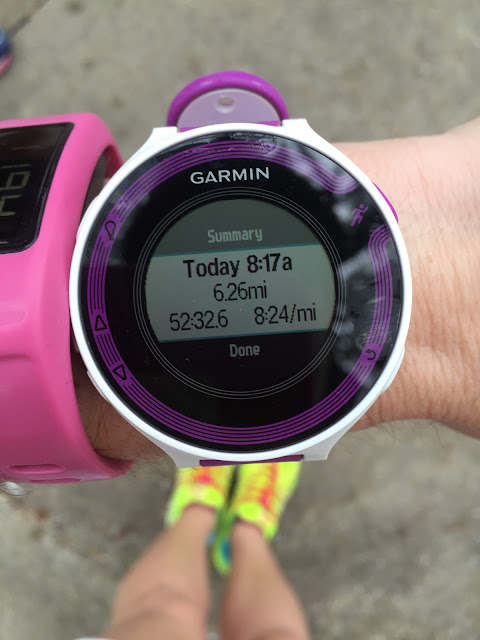 Once we caught our breath Jenny and I celebrated our run! 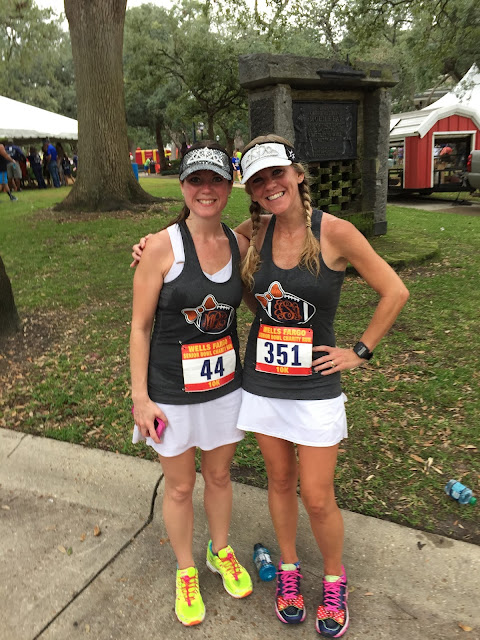 I just happened to look up and guess who I saw? My cousin James!!! I had no idea he was running this race! He had run the 5K and placed 1st in his age group!!!! 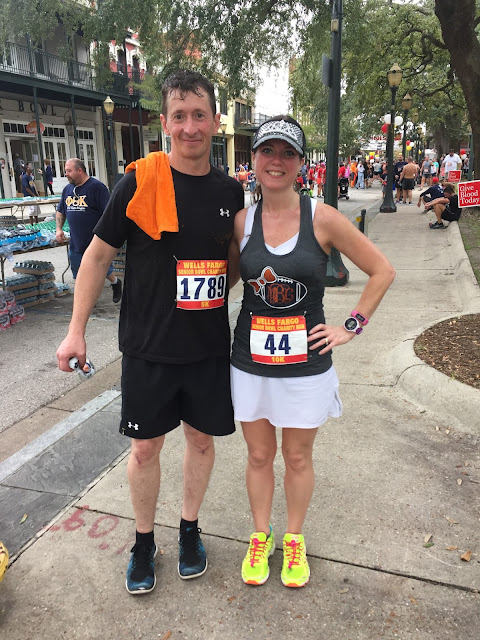 While we were waiting on the official results for the 10K we chased down the Chick Fil A Cow AND the man with boxes and boxes of pumpkin shaped Reese's peanut butter cups!!! 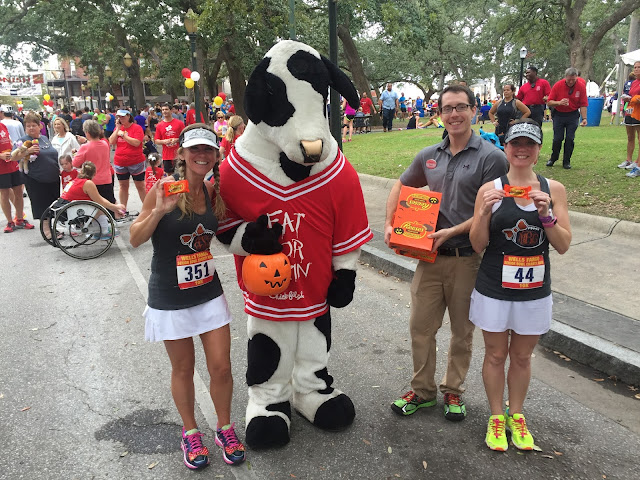 But my happiness subsided a bit when I discovered that one of those Reese's was 170 calories! Wow! I gave it away instead. It wasn't worth it. I wanted to eat real food with all those calories I had just burned running!

Jenny and I had a few more photo opps! I love the candid ones of us where we are asking each other....how do you want to pose? Funny or normal? Lol! 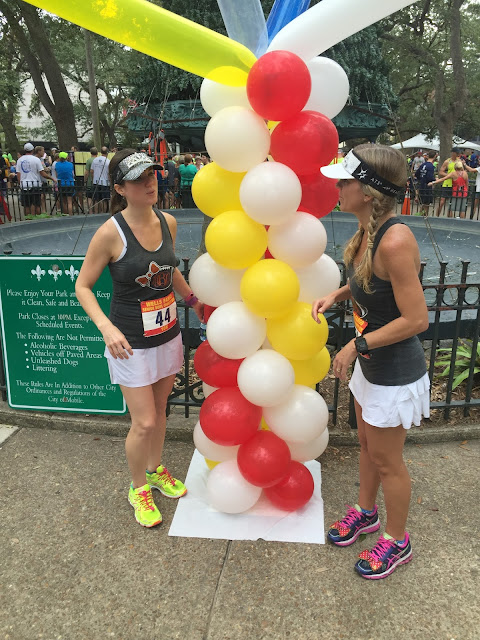 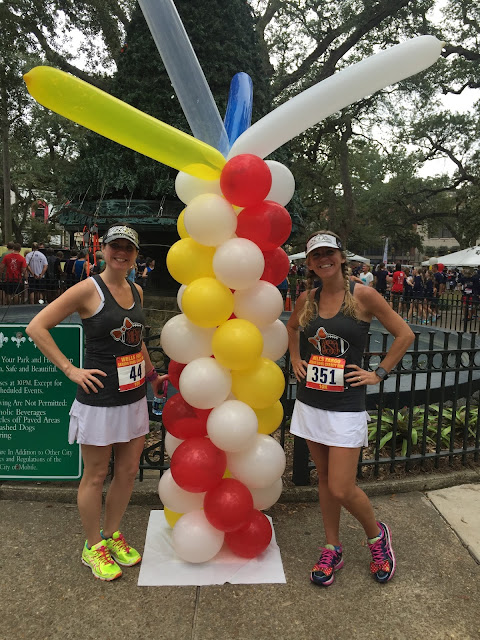 Finally the 10K results were posted! And I had placed 2nd in my age group!!!!! I was shocked!!! This was a fairly big race and I couldn't believe I had placed!!!!

We waited for awards of course! And I got to cheer for James as he got his 1st place award! 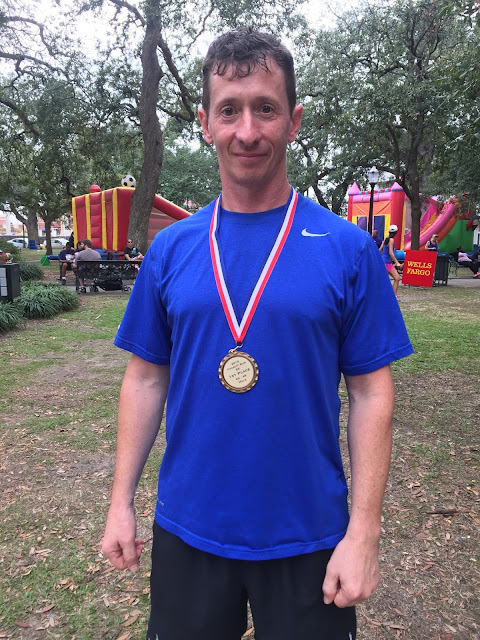 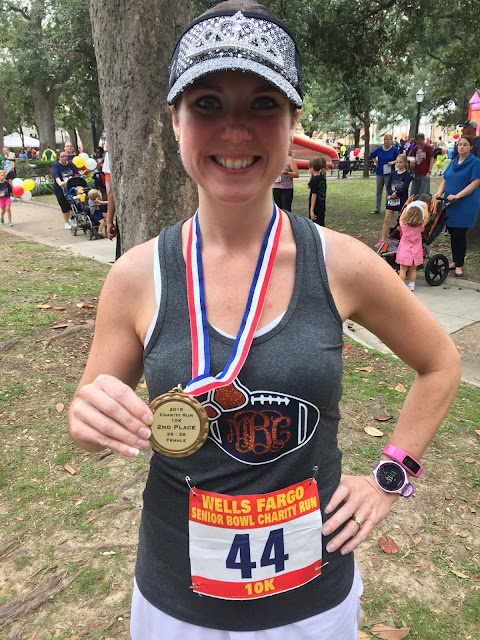 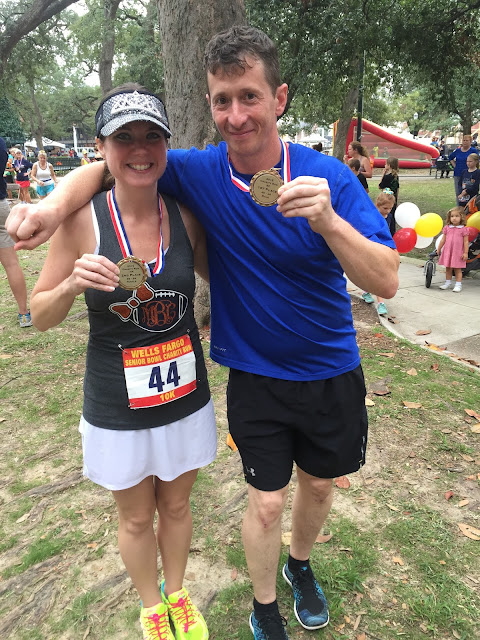 It was a tough race but so much fun! And I'm so glad I got to see my cousin at the end! I loved sharing our wins together!

As always...it was a blast running with Jenny!!! I can't wait to race together again...which will be THIS weekend for the Battleship 12K!!!! :-)

QOTD: Have you ever run hard in tough weather conditions and surprised yourself with what your body could do?