So I've lived in this area my entire life and I've never run the Double Bridge Run. I've always wanted to but I always had something going on the same weekend that interfered.

Our plan was to run this race as a training run since we are running the Glass Slipper Challenge in Disney the next weekend. We didn't want to race it and make our legs too tired. Of course if you've been following along on this training then you know we said the same thing about the Big Beach Half Marathon a few weeks ago and we ended up running it pretty fast. We try to slow down I promise!!!

It was an early race morning for us because we had to travel about an hour away. Luckily one of our friends was staying over there and they parked their car at the finish line the day before so we would have a ride back to the start. So that meant we didn't have to drive to the finish and catch a shuttle to the start line. We just picked up our friends and drove straight to the start line! Otherwise it would have been an even earlier morning! We were very thankful!

Once we reached Pensacola the sun was rising. It was sooo gorgeous and the sign of a beautiful day (and race) to come! The temperature was in the 40's but it was super windy. Luckily the wind was in our favor and was at our back most of the race. 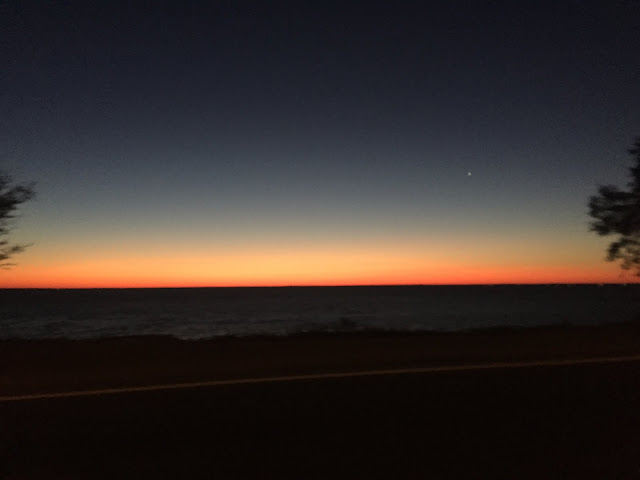 We got to the starting line with about 45 minutes to go until start time. We immediately went in search of the porta potties since we had been driving for so long. My coffee that I enjoyed on the ride over was going straight through me!

We got in line and who did we see? My friends Kirstin and Jim!!! They'd stayed on Pensacola Beach the night before so they were already in town. This race was very crowded so I was so happy we found them! 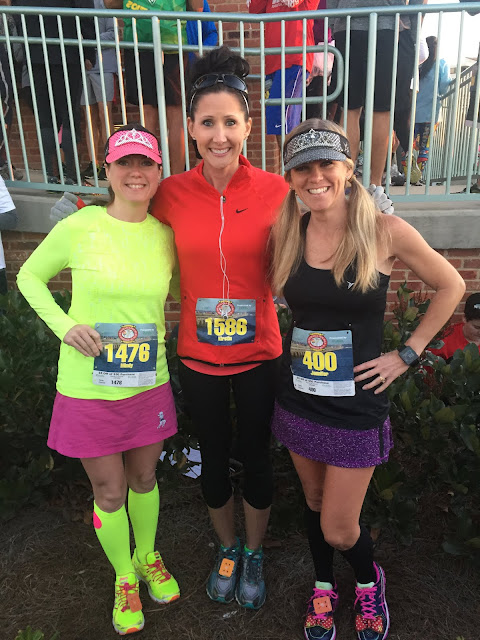 After using the bathroom we all headed towards the start line. But first...one more picture with Shannon, Jenny, Kirstin, and me! 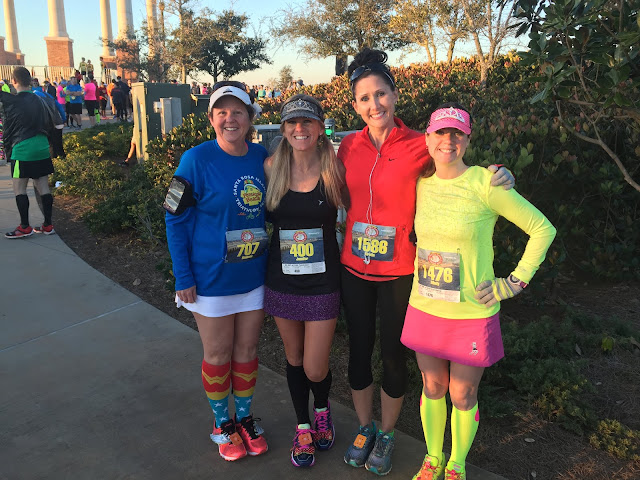 We made it to the start line and it was so crowded! We tried as best as we could to make it up as far as we could. We got to the 11 minute mile corral and we couldn't go any farther. Not cool for me and Jenny who knew we needed to be in at least the 9 minute mile corral. But we couldn't move so we had to stay where we were. The good news...we all got to start together...except for Eric who had gone back to the car for a minute and ended up being able to reach the front of the start line. 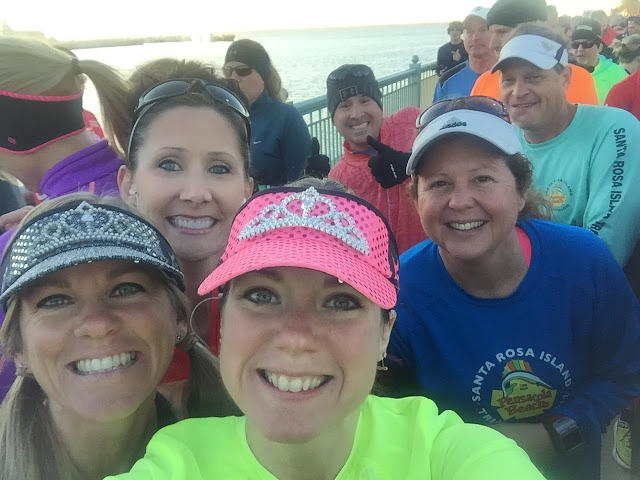 They started letting each corral go. I think they had about 30 seconds in between each corral. Finally we could see the start line! 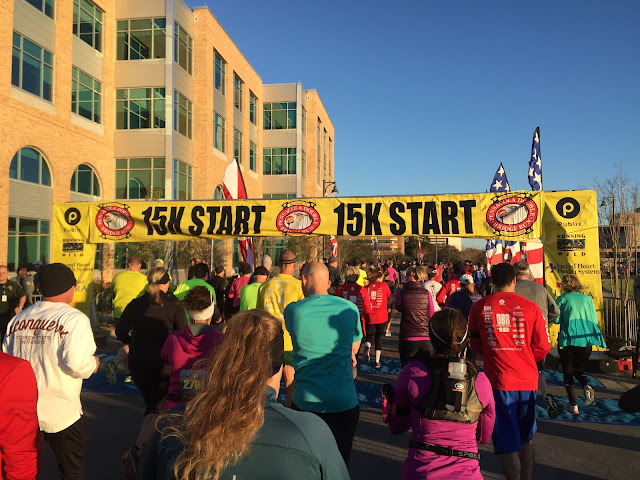 And then we were off! Jenny and I had to do a lot of weaving around other runners. This race was pretty crowded! And it stayed that way the entire race! I'm not sure if it would have been like that if we had been in the correct corral.

The first three miles we ran out of Maritime Park and in part of downtown Pensacola. Then finally around mile 3 we made it to our first bridge...which is called the Three Mile Bridge! 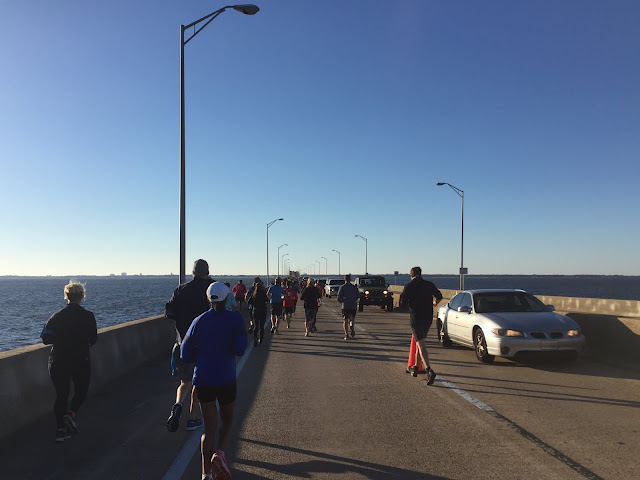 We of course ran on that bridge for the next 3 miles! It was so gorgeous running on the bridge and seeing the water below us! And at the very top we ran into my friend Tim Ard who always runs and takes pictures of the runners! He ran ahead of us real quick and turned around so he could get a picture of me and Jenny! As always it's a great picture!!! 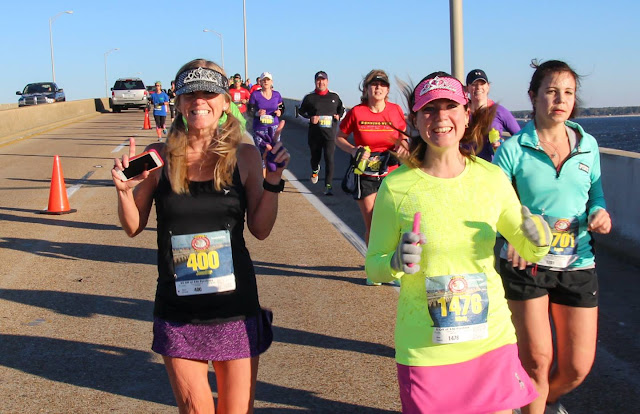 Around mile 6 we exited the bridge and were in the town of Gulf Breeze! There were several places with crowd support along here. The Chick Fil A had the cow out waving and cheering us on. This was also the place where the 5K started so there were tons of people out for that as well.

Before we knew it we were almost at mile 8 and it was time for our second bridge...the Bob Sikes bridge! This one would lead us straight to the beach! 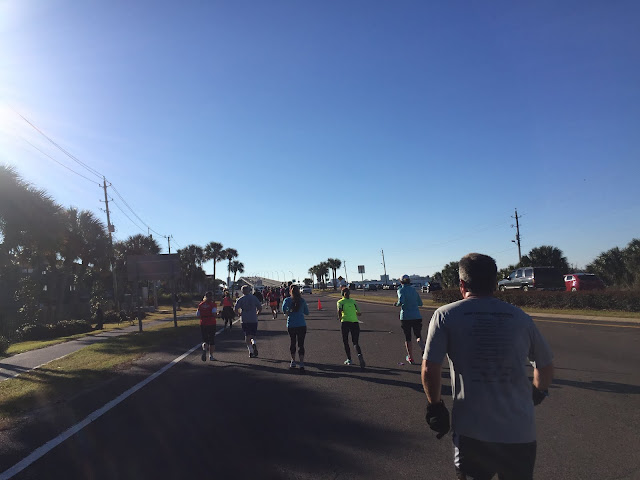 The water was so gorgeous!!! Pensacola Beach is my favorite!!! 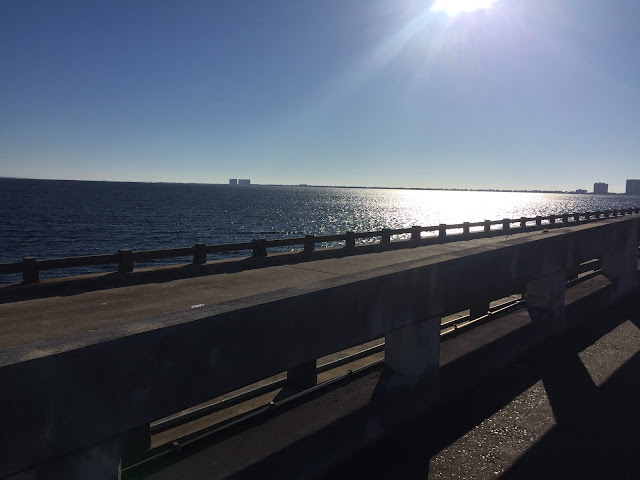 And of course we had to take a running selfie on the top of the bridge!!! 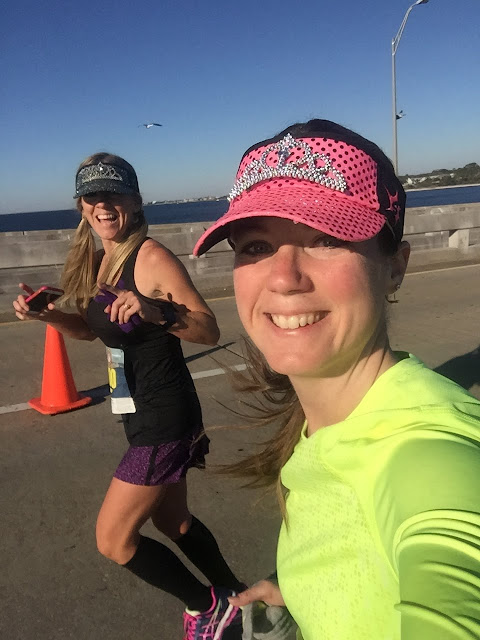 We were almost there! I jokingly asked if we needed to pay a dollar to get on the island like you do when you're in a car!

We exited the bridge and had about a half a mile to go to make it to the finish line! 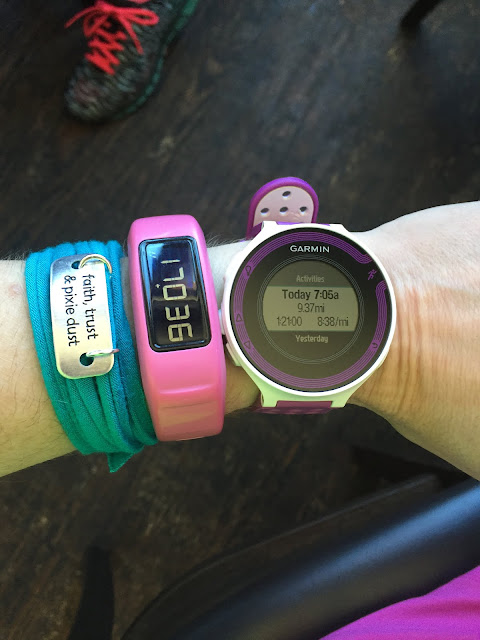 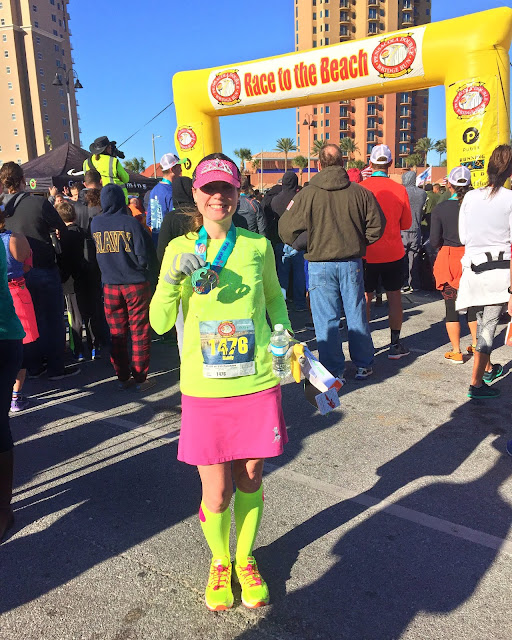 As soon as we crossed the finish line we got our medal and water. Then we headed to the tent to get our free visor or hat! On the way I ran into a friend from high school...Tommy! It was so great seeing him!!! 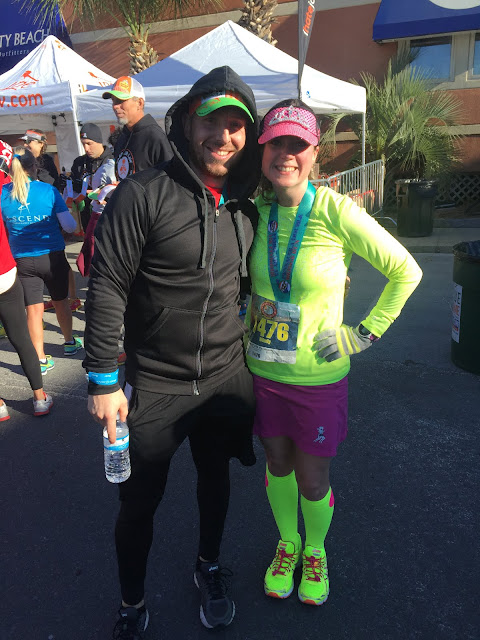 Our next priority was getting out of the wind. It was sooooo cold!!! We found the perfect spot on the boardwalk and looked up and there came Kirstin and Jim! We found them again...yay!!! So of course it was time for finisher pictures! 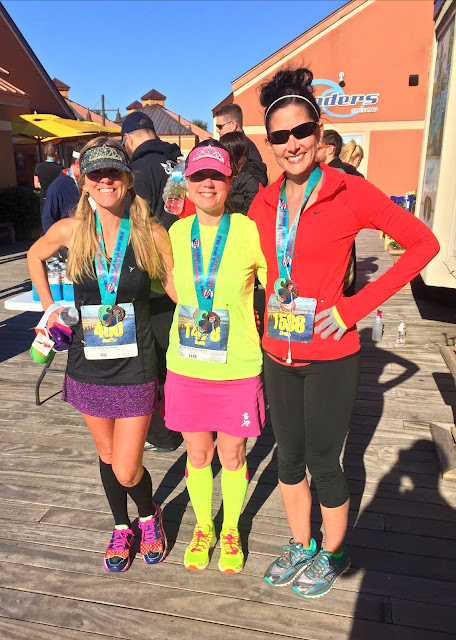 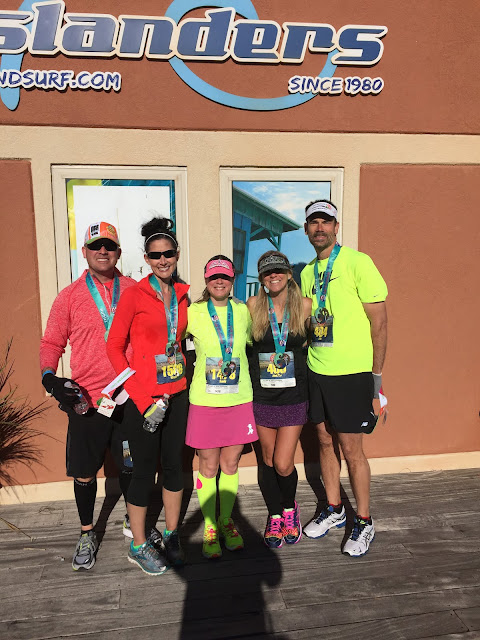 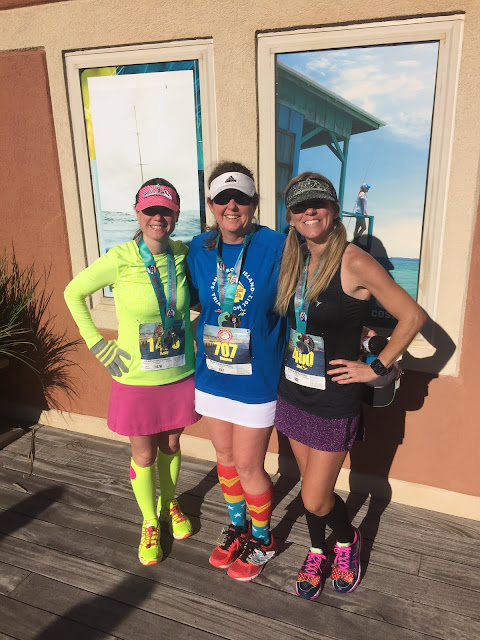 And of course Jenny and I had to get one of just the two of us together since we ran the race together! Eric took funny pics of us getting ready to take the picture lol! I love these! And the story behind it is that I was trying to get my gloves all situated lol! And hold my water and banana at the same time lol! Too funny! 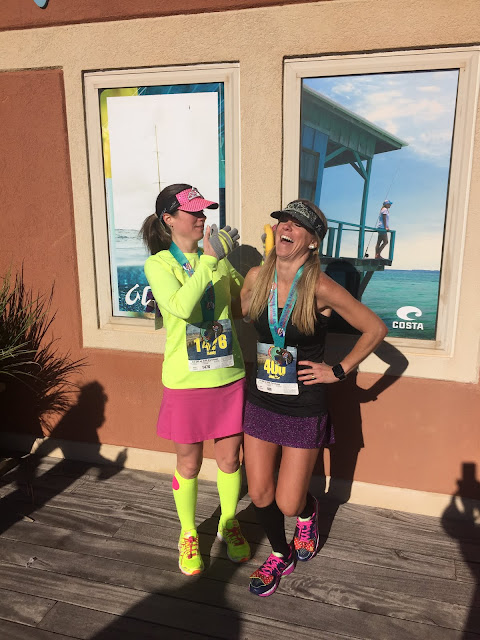 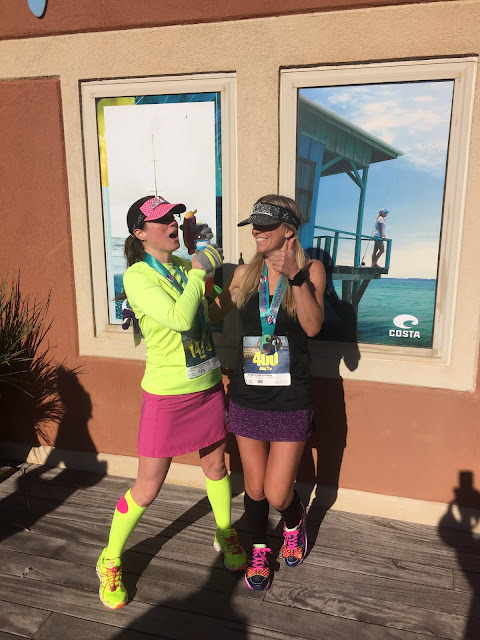 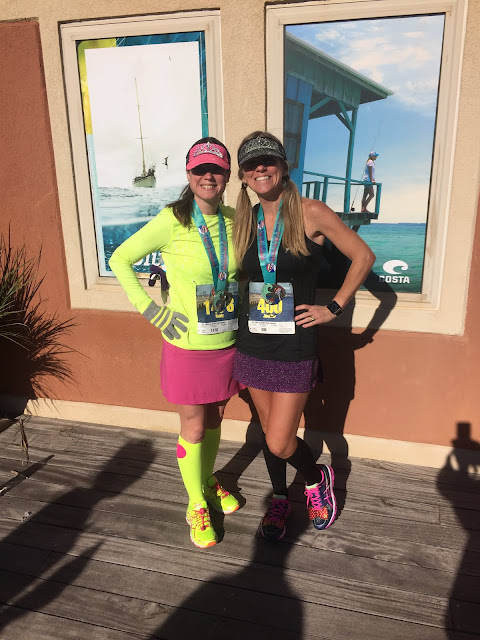 After pictures we went in search of some food! They had food for us in one of the restaurants on the boardwalk. They had already prepared boxes of red beans and rice and gumbo and a roll. It was so yummy and I was starving! Unfortunately my hunger took over and I didn't get a picture of the food. Blogger fail lol! But it was so good that Eric went back for seconds lol! So you can kind of see his food! 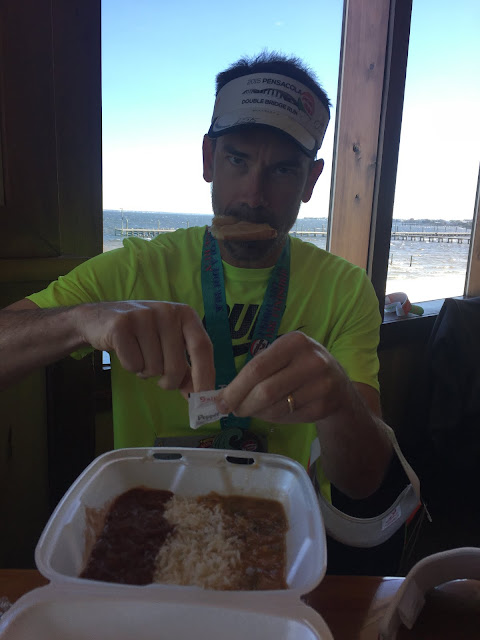 We hung out a little longer and then it was time to go! We headed home and Jenny treated me to a cup of coffee when we got there. See our cute mugs? Hers was Minnie's bottoms and mine was Minnie's head! LOL! 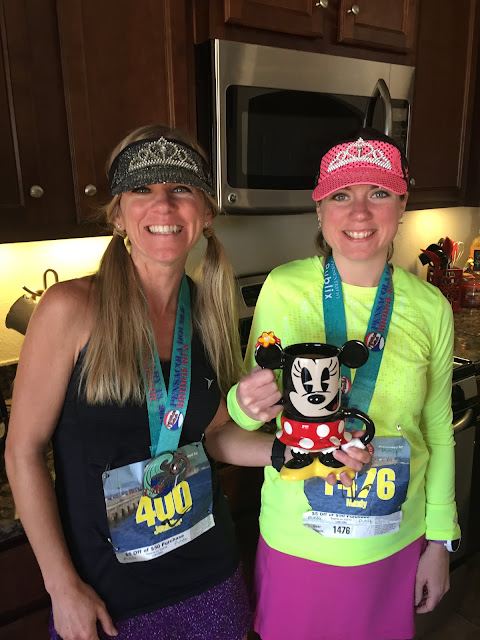 This race was so much fun! It will definitely be on my race calendar every year! The distance was perfect! Running to the beach is always a plus! And the medal and visor were awesome!!! 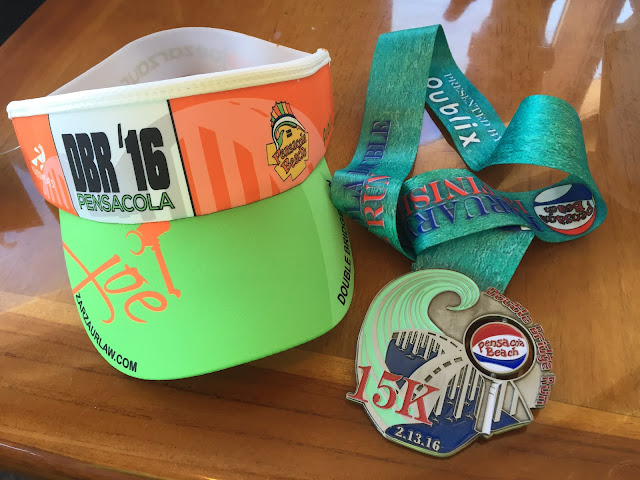 QOTD: Have you ever run a race involving bridges?