The Senior Bowl Charity Run is a race in my area that I run every year! They have a 5K, 10K, and a fun run!

Since the Senior Bowl is all about football I usually wear my favorite college football team colors to support them! And just in case you don't know...I'm an Auburn Tigers fan! ;-) 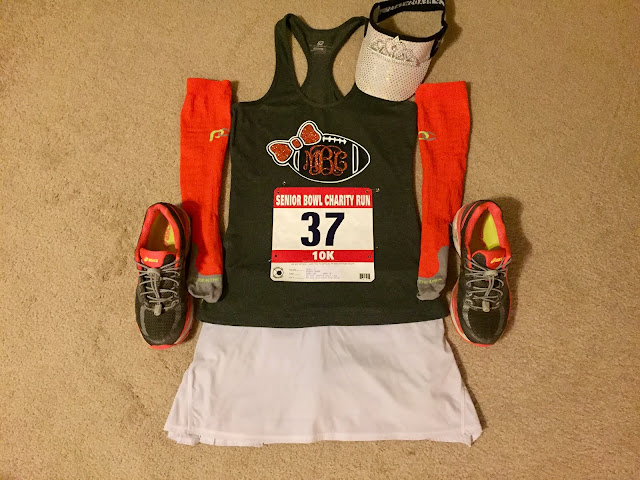 You never know what the weather will be....there are several years it was FREEZING cold and others where it was hot and super humid.  This year the weather was pretty perfect! The temps were in the low 60's at start time.

It only takes about 15 minutes to get to the start area from where I live. Donna and I rode together! We parked and then headed to the Senior Bowl office where we were meeting some of our friends. 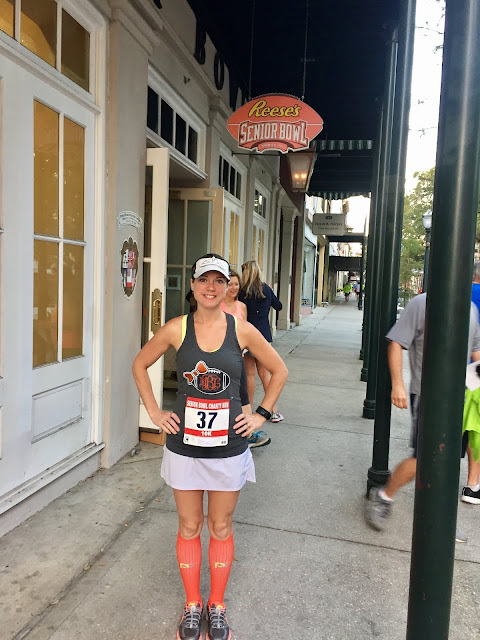 Then it was time to head to the start line area! They always fly a HUGE American flag! I love it! 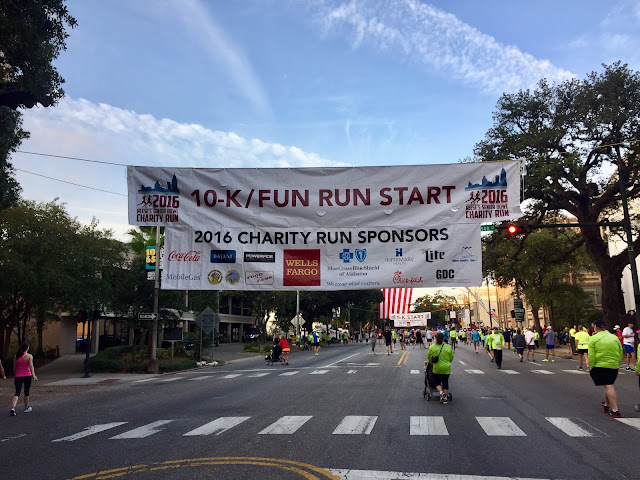 Of course we needed a few in front of the start line pictures! 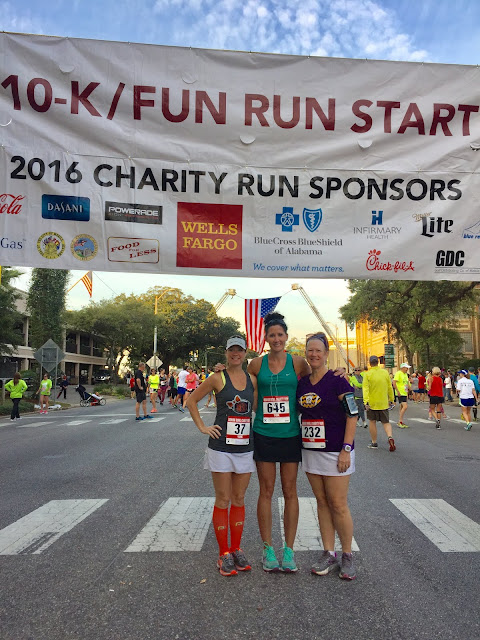 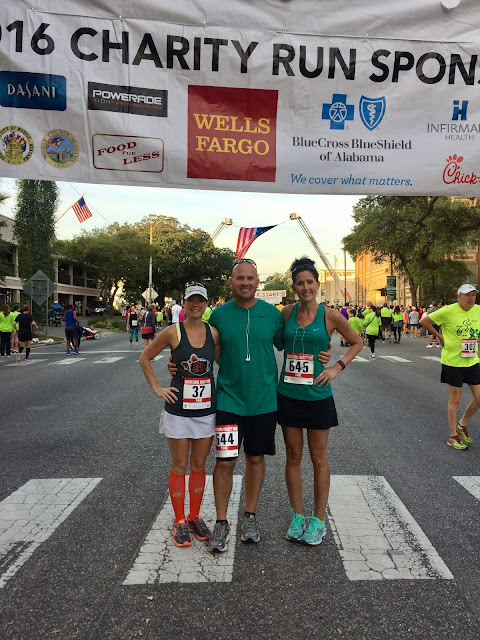 I also found my friend Paige who was there with her church group that she had been training to run a 5K! 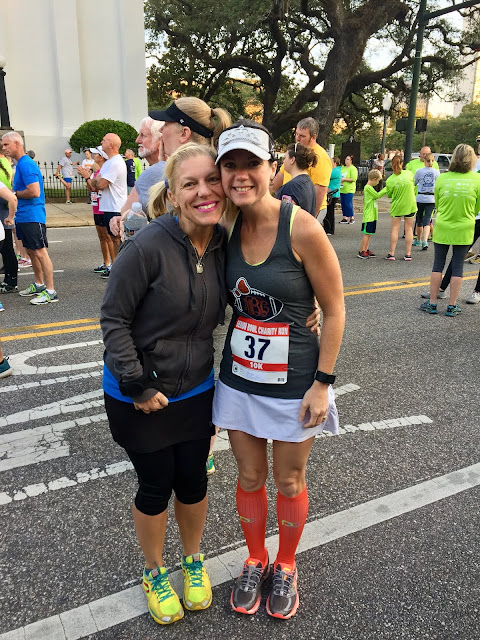 The 5K started first...and then 15 minutes later it was time for the 10K to start!

I LOVE this start line selfie with my friends Kirstin and Jim!!! 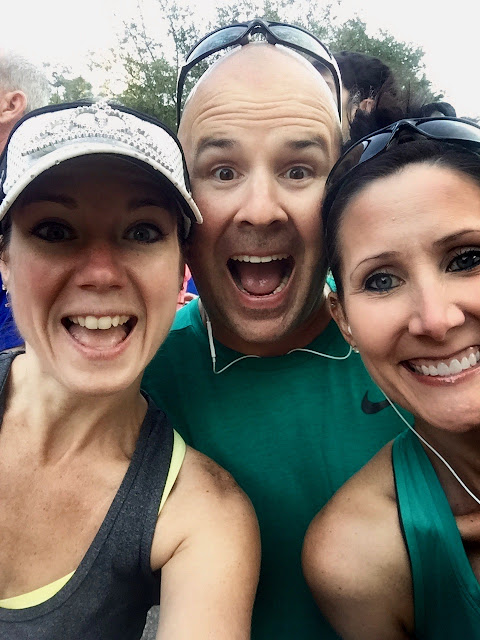 I didn't really have any goals for this race. I was just planning on running it by feel. I knew I wanted to come in under 55 minutes. But other than that I didn't have a goal.

I started out running pretty fast. I looked down at one point and saw a 7 minute pace. I knew I needed to slow down so I would have the endurance I needed to finish 6.2 miles!

This course is super flat, fast, and so pretty! There are numerous times where you are running under the canopy of trees! 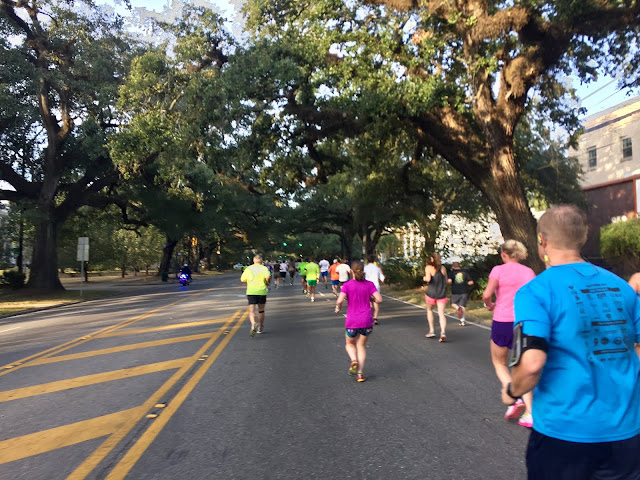 I felt amazing this entire race! I kept a pretty steady pace once I found the pace that felt good.

Around mile 4 I saw a spectator on the side of the road with a cute dog and she was wearing compression socks and a Boston Marathon shirt. I knew instantly that she was a runner. As I got closer I saw that it was Elizabeth from Running For Bling!!!

She saw it was me about the same time and shouted "Hey Mindy" to me! I said hey and since I was running and my brain barely works while I'm running I asked her why she wasn't running this race. She reminded me because she had run a marathon the weekend before! Duh! I so knew this but couldn't think of that while running lol! Anyone else have dumb brain while running??? Elizabeth ran the Marine Corp Marathon the previous weekend so she was still in recovery mode. She was super sweet and snapped these pictures of me! You can see I was talking while she took the pictures lol! It was great seeing her out on the course! 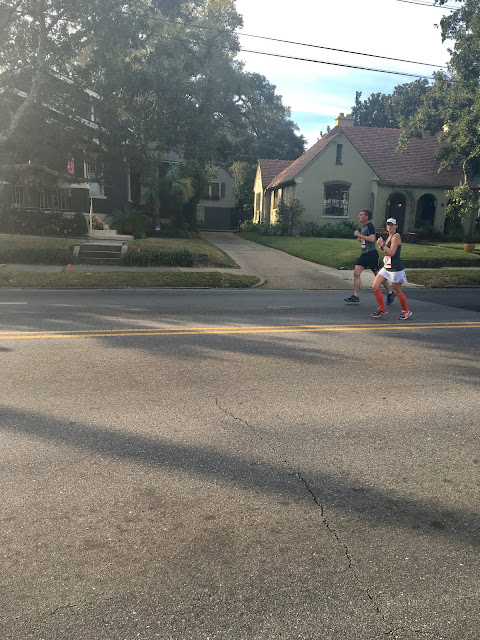 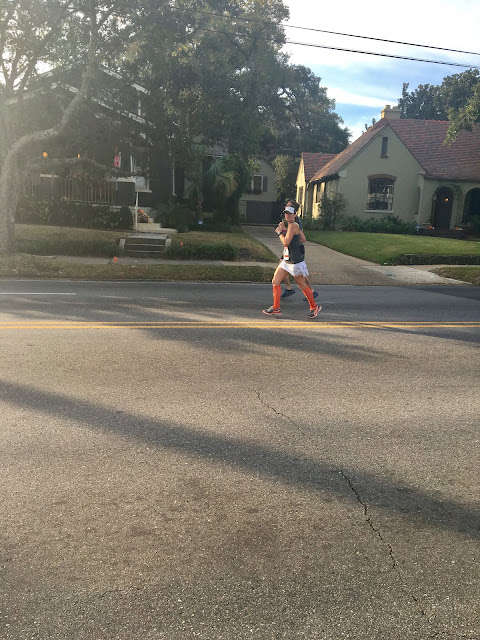 So...do you see the guy that was running right beside me? He ran beside me or slightly behind me for most of the last half of the race! It wouldn't have bothered me much if he hadn't been breathing like he was going to die! Kind of annoying!

With about a mile to go I saw Tim And (my favorite photographer) out on the course snapping away pictures! I said hey to him and he commented on my new hair cut (I had gotten it cut the day before)! He always takes great pics! (And you can see the annoying guy slowed down some...he is about two runners behind me at this point) 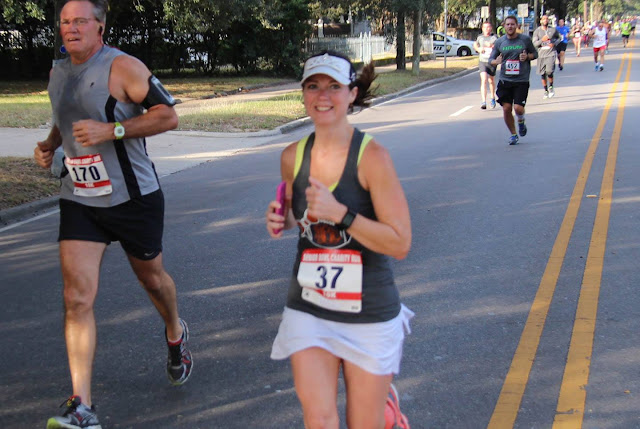 Finally we came to the point in the race where we were so close to the finish! You can see the RSA Tower in the background. 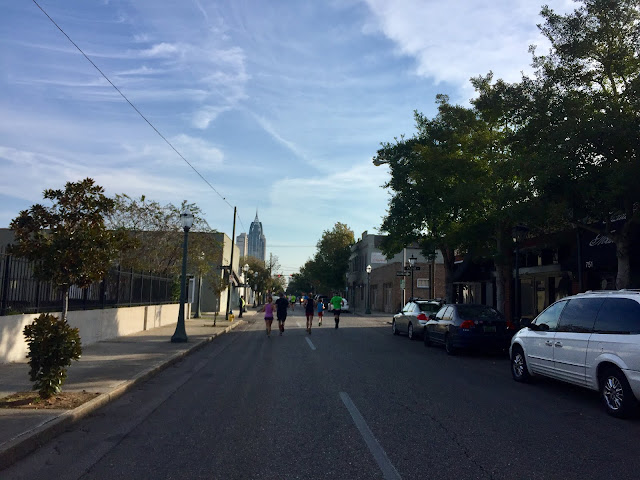 At this point there were two women in front of me that looked like they may be in my age group. I had passed one of them at one point in the race but she ended up passing me a little later. I tried my hardest to get in front of them but I just couldn't.

Finally I made it to the finish line and had energy to sprint in! 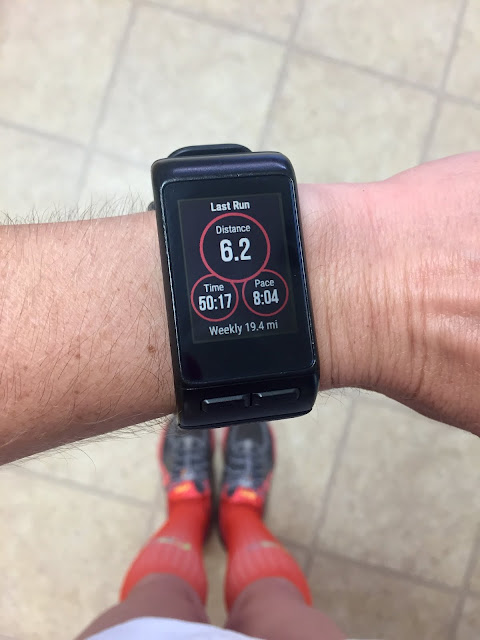 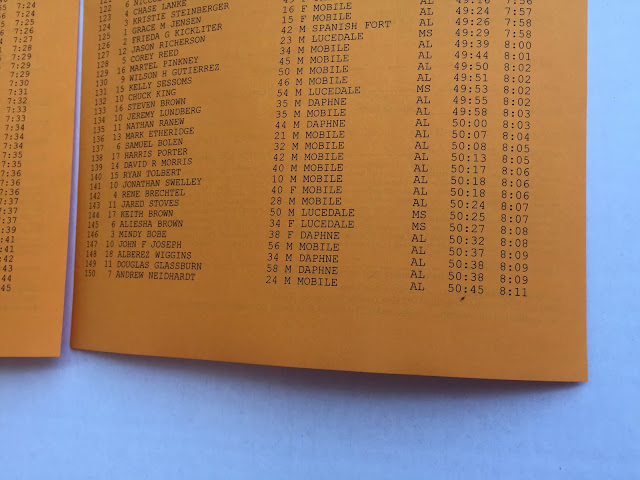 This race isn't chipped timed though. You run in to the finish and tear off the bottom of your bib to hand to the officials. So I'm not sure whether to use the official time as my PR or my actual Garmin time. Either way....it's still a PR! 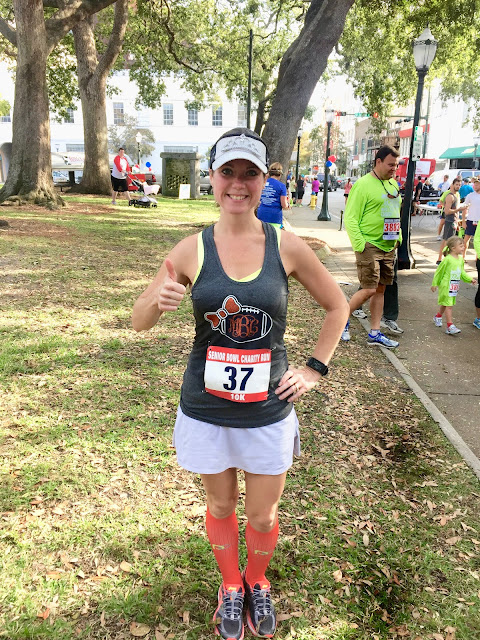 Tim saw me and Paige enjoying the finish line festival after the race and like he does best...he took a picture of us! 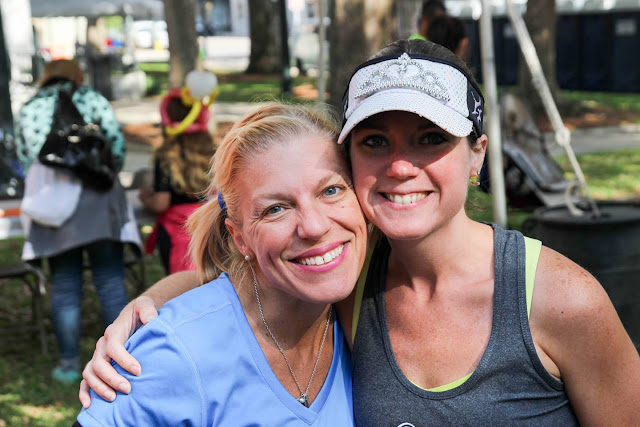 The bad news...my friend Donna fell during this race. She hit her chin pretty hard on the pavement. She was all bruised and skinned up on her chin, nose, elbow, and knee. She was ok but in some pain.

The awards ceremony had a late start of 11:30 but I didn't stay because I knew Donna needed to get home. She ended up going to Urgent Care later just to be sure she didn't have a concussion. She was fine...just bruised up.

I wanted one more picture in front of the fountain before we left! Donna took it for me. 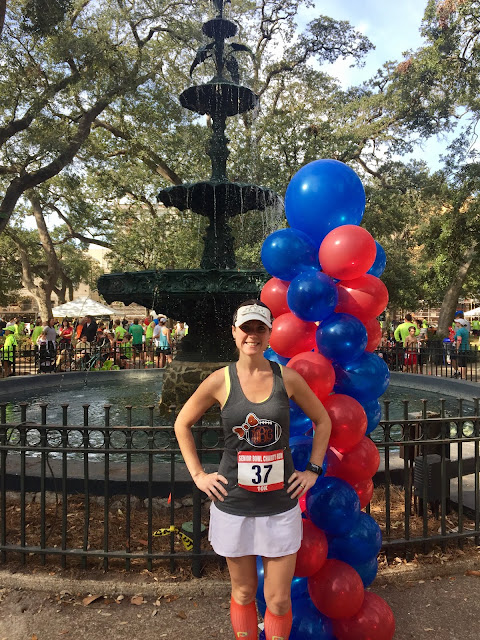 I didn't think she would want one with her injuries but she did! Good for her! 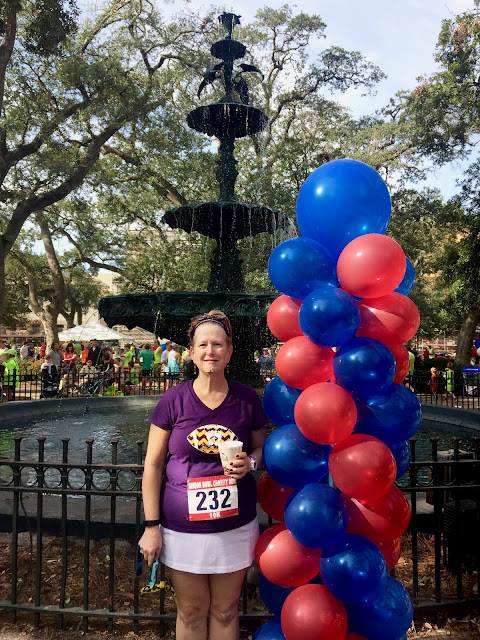 Since Donna works within walking distance of the Senior Bowl office, she picked up my age group award for me yesterday! So sweet of her! 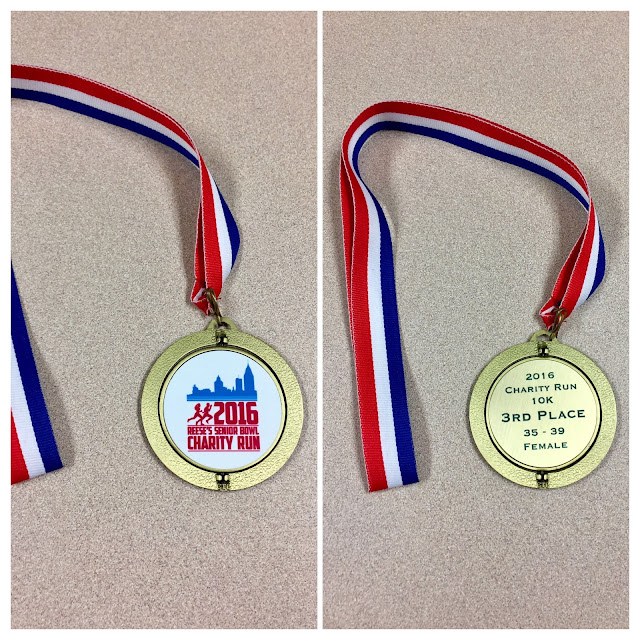 This race was a great one like it always is! I was super surprised and super proud to PR! I will be there again next sure for sure!

QOTD: When a race isn't chipped timed what do you count? Your Garmin or the race's "official" time?