Got to get back into the routine! Although I enjoyed my week of rest, I was so ready to run again! Most of the girls are going to be running the full marathon in New Orleans in February...I am only doing the half...especially since the Disney Princess half is two weeks later. Plus, I am not sure I ever want to attempt a full marathon. Right now I am content with being a half marathoner! Anyway, so everyone has to start training again...so we started it off with a 10 miler this morning! Technically, I did not have to run that far since I am only doing the half...but I can't let them have any fun without me lol! So I opted to run the whole 10 with them.

This morning was my first run since my half marathon last weekend. And boy could I tell it! I struggled the first half of the run but started feeling better the second half. Glad I pushed through it...I don't struggle often but when I do it really knocks me down! I think most of my struggle was because my body has done nothing physical since the half. And then I shock it into doing 10 miles this morning. I think I am learning that any more than 2-3 days in between my runs is not good. I get out of the groove. That could explain a little of my struggles last weekend at the half too. I had run on Tuesday and chose not to run with everyone else on Thursday because I thought my legs needed to rest. I think that was a bad decision and helped contribute to my not so good run during the half. Next time, I am going to make sure to get all those runs in the week of and see if that helps. Good thing about today...I did NOT quit...I kept running (no walking) and pushed through it to the end! I can be proud of that! The stats: 10 miles in 1:55:44...average pace of 11:33! 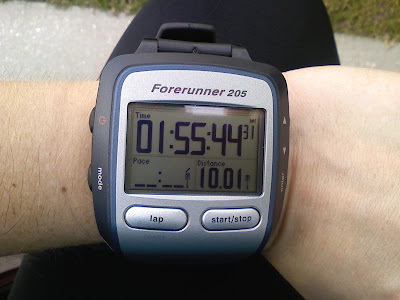 My ice bath felt heavenly this morning...I really missed not doing one last weekend after my half. And I was pretty sore too. I think the ice bath really really works in minimizing all that soreness! 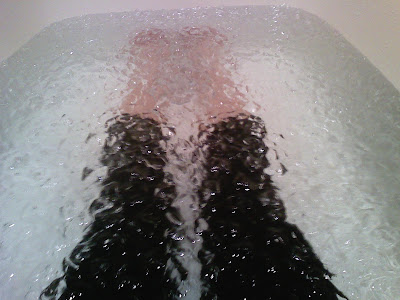 Happy Saturday to everyone!