Be sure to read all about packet pickup and the day before the race!

My alarm went off at 5:00 AM race morning. I slept the best I think I've ever slept the night before a race! Donna said she slept great too! I'm not sure if it was because there were only the 2 of us rooming together so we each had our own bed or what. We also talked about how we weren't stressed out about this race at all. So I'm sure that helped too!

Donna and I got ready in record time and made it to the lobby by 5:30. We were so excited because our hotel offered breakfast starting at 5:30! Usually the free breakfasts don't start until after we have left for the race. So I was so excited to eat a bowl of oatmeal and have a cup of coffee!!!

We left the hotel around 5:45 and were on our way to the state park where the race begins and ends. We made it in plenty of time and with minimal traffic. We had enough time to use the real bathrooms in the park and not the porta potties! Score!!!

The temperature was in the 60's and it was humid. Last year I remember it being cold and us sitting in the car for awhile before the race to stay warm. Not this year.

After using the restroom we headed to our meeting spot to take a group picture. There were about 15 Sole2Soul Sisters there! We were all wearing orange shirts with the words "Fight the Good Fight" from 1 Timothy 6:12. This shirt was in honor of our fellow Sole2Soul Sister Leah who is fighting cancer. We were all so happy and blessed to be running in Leah's honor! 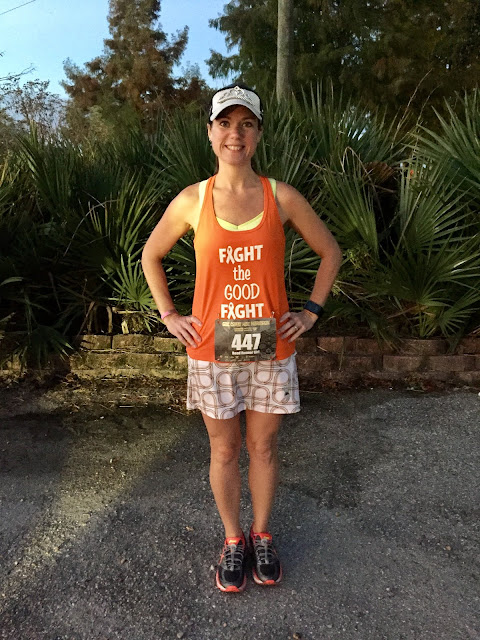 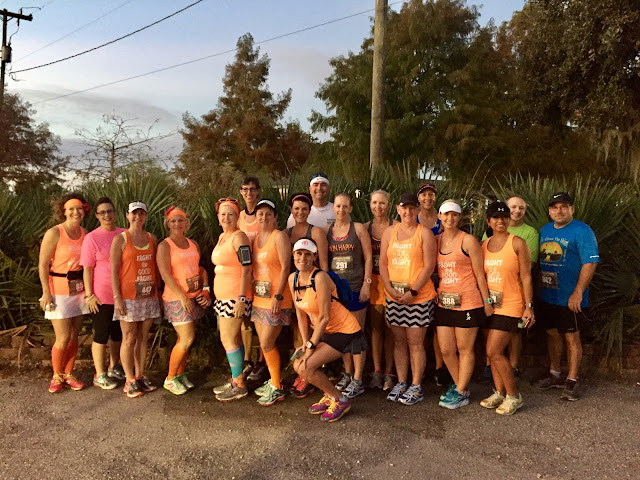 Before long it was time to line up in the chute! Everyone crowded in and I couldn't get exactly where I wanted to be. But I did find Gina, Kristi, and Beth so I stayed with them! 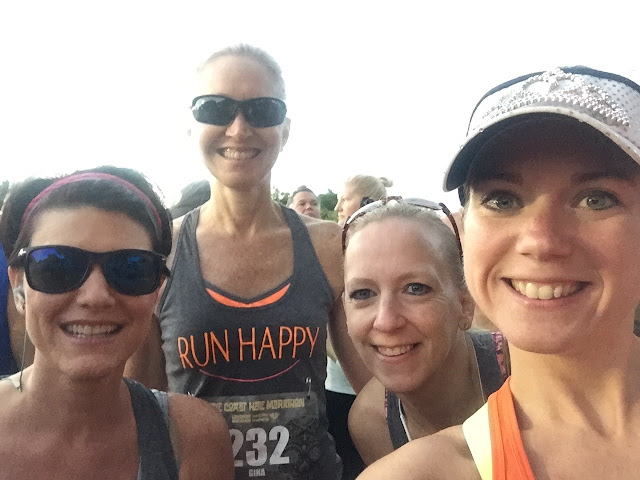 Mike, the race director, warned us the cannon would go off but I still jumped when it did! It was loud lol! Then we were off!

In my training I had been staying around an 8:45-9 minute mile. So that was pretty much my plan for the race.

I had to do a lot of weaving in and out of people the first mile since I couldn't get further up in the chute like I had wanted. But once I got out of the crowd I was able to keep a pretty steady pace.

I was feeling great from the start! My legs were great and my breathing was great! I got into a great steady pace! I did more of running the way I felt rather than paying attention to my pace. I realized that I was running faster than my training but it felt good so I just kept running that way.

This route is so pretty! You start out in the park and then you exit out of it, run down a highway, and then you enter neighborhoods with tons of beautiful houses!

I was surrounded by people most of the race. But it wasn't too crowded. 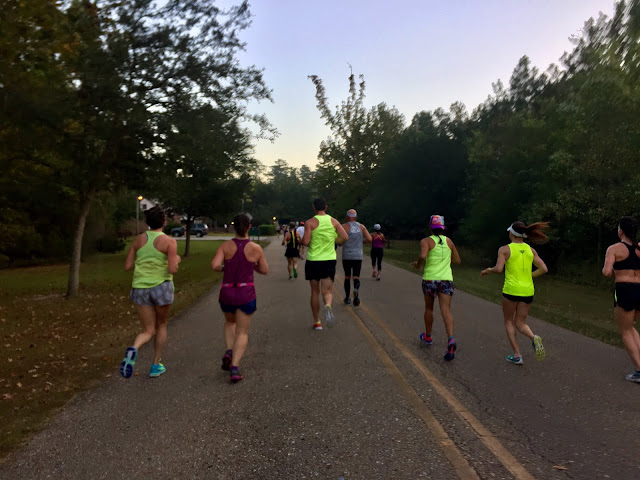 I decided to do water stops the way I had been training. That meant stopping around mile 3.5 and mile 7-8. Thankfully this race has TONS of water stops!

Every mile marker was clearly marked with signs which I love! 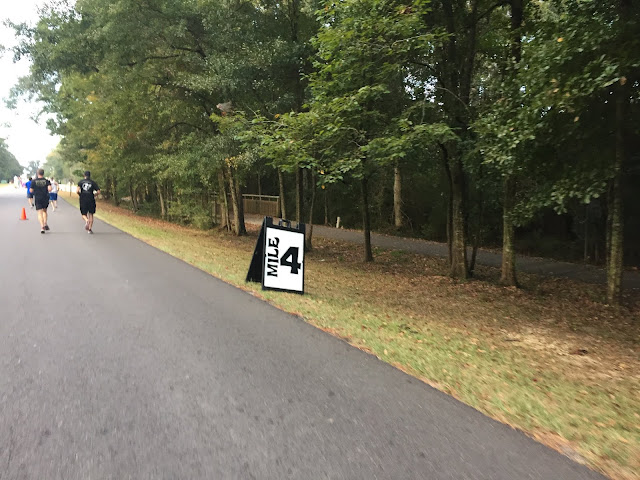 Around mile 4.5 I turned onto my favorite part of the course...running along Lake Pontchartrain! The water was beautiful and all the houses were gorgeous! 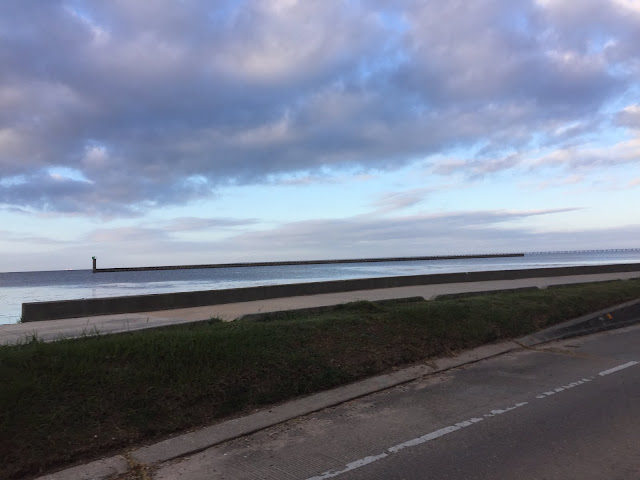 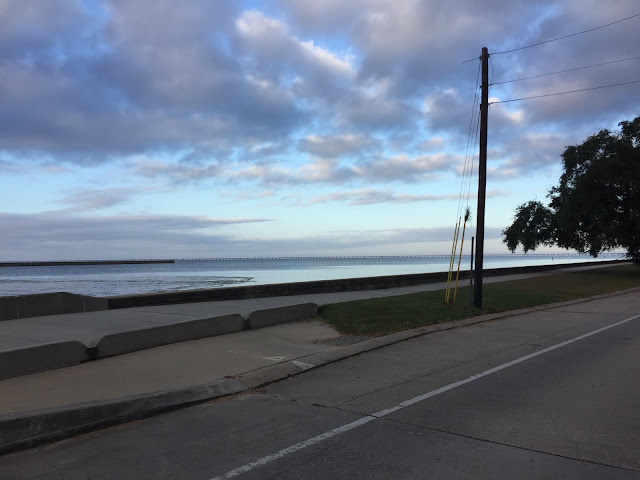 At mile 6 we made a right turn into a neighborhood. I just kept cruising along and enjoyed looking at all the houses! 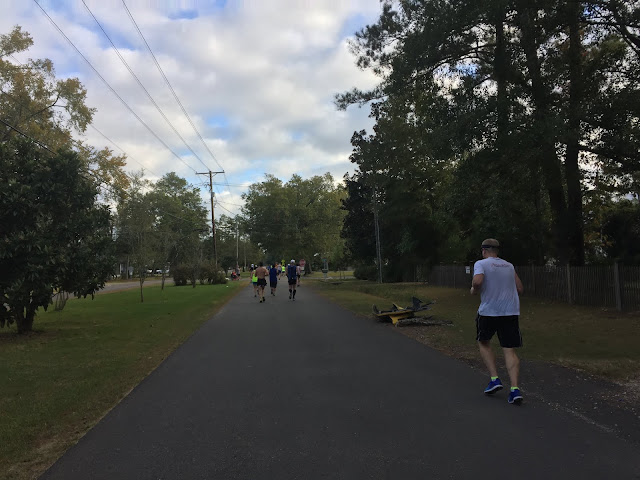 We weaved in and out of neighborhoods until around mile 9. Shortly after reaching mile 9 we turned onto the bike trail (Tammany Trace). This part of the race always seems to take forever. You are so close to being done but still have about 4 miles! 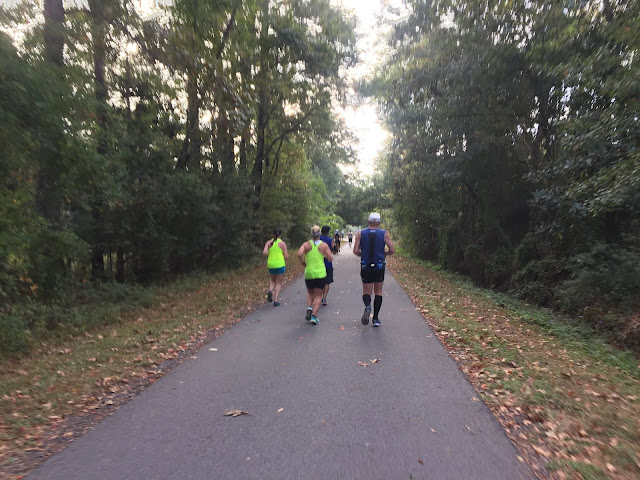 While on the trail there was a guy in front of me. I was running in his left blind spot. I was keeping a steady pace but couldn't go any faster to pass him. I finally told him I was sorry I was running right on him and he said that it was ok because I was keeping him motivated! I told him we were running the same pace and it was helping me too. We talked a little but mostly just ran near each other. We were both pretty focused.

After what seemed like forever we finally took a right hand turn off the trail and back into the park. This was around mile 11.5. Not much more to go. The guy stopped for a water stop but I kept going. Not long after reaching mile 12 he caught up to me. I said, "There you are!" He replied, "I'm back! Only one mile to go!"

He ended up running a little faster than me that last mile but he was still in my sights. Y'all! That last mile was TOUGH! I was so ready to be done! But I didn't want to slow down.

FINALLY I see this sign! And I LOVED it! That's exactly how I was feeling lol! 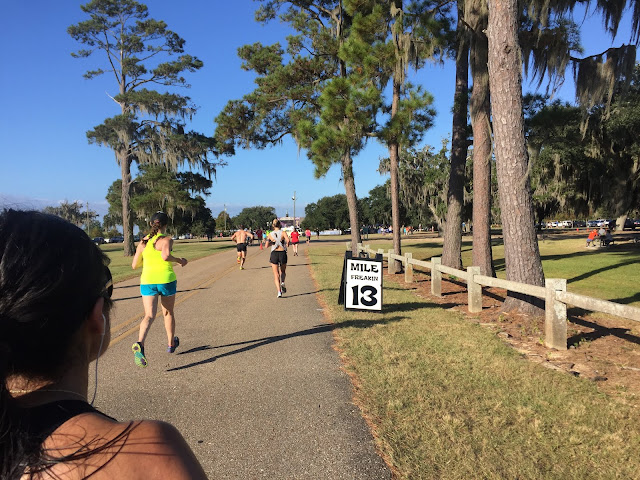 Once I saw the finish line and the time clock I started sprinting! I knew at that point that I was really close to a PR!

I ran across the line and stopped my Garmin! But I didn't even look at it right away. The guy I had been running with at the end had stopped at the end of the chute and told me great job and fist bumped me. I saw him later and we talked a bit. He was super nice! I told him thank you because he helped push me! 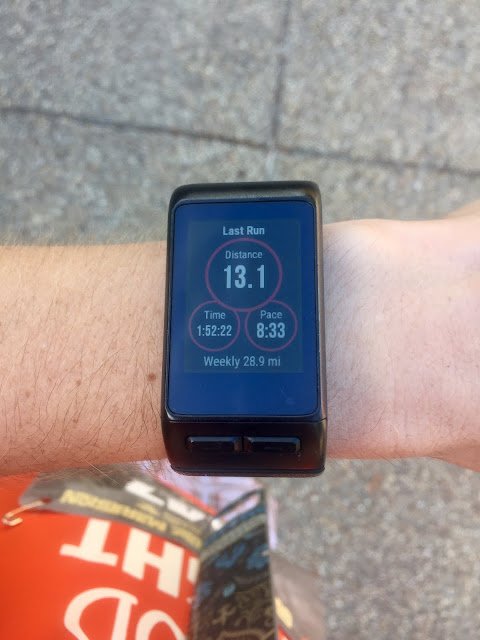 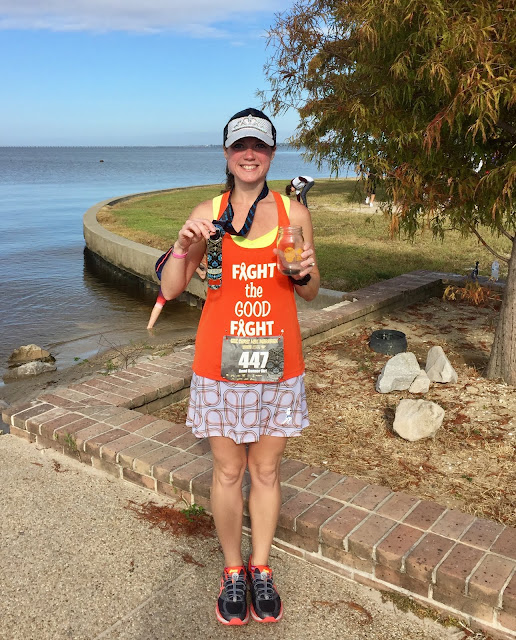 I stayed at the finish line and watched Beth, Kristi, and Gina finish. Then I went and found them.

The official race results were posted and I found out that I was 5th in my age group! Pretty sweet! 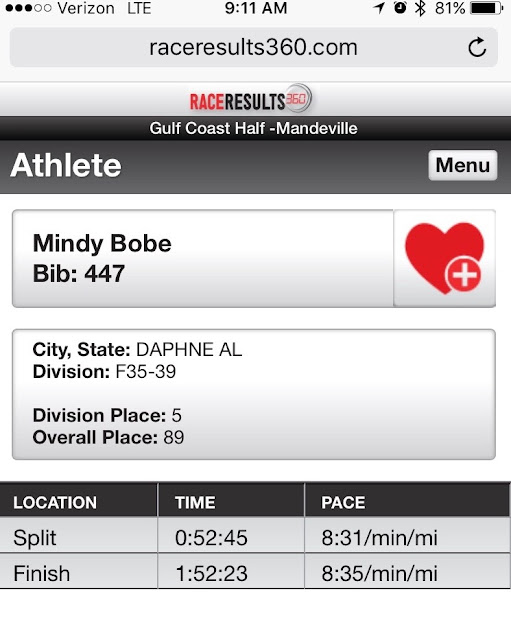 After looking at the results we went to our cars to put up the glass they had given us at the finish line. I didn't want it to get broken. I also wanted to change into my flip flops lol!

On the way back from the car I ran into Jennifer! She had a cold so it wasn't a great race for her but she did it! 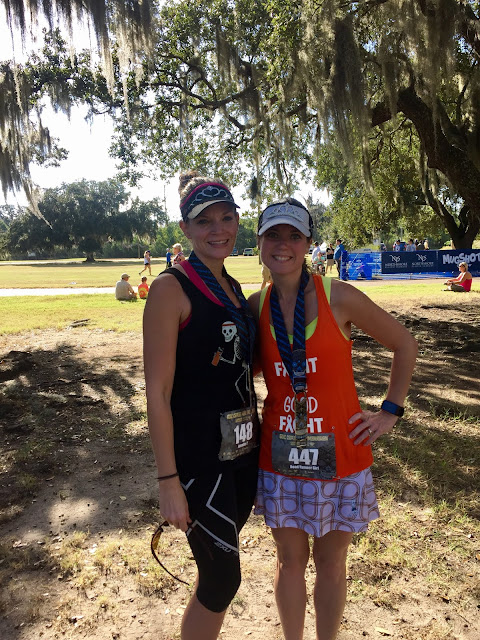 She told me that the race director, Mike, had just called my name over the speaker to come see him. He had told me earlier to not leave because he had something for me. So I found him and he blessed me so much y'all! He and his family had gone to Hawaii this summer. He told me he had had this since then and had meant to mail it but never got around to it. 3 weeks ago he was going to mail it and his wife told him to just give it to me at this race. Y'all! He bought me the Starbucks mug from Waikiki!!! I was soooooooo excited!!!! 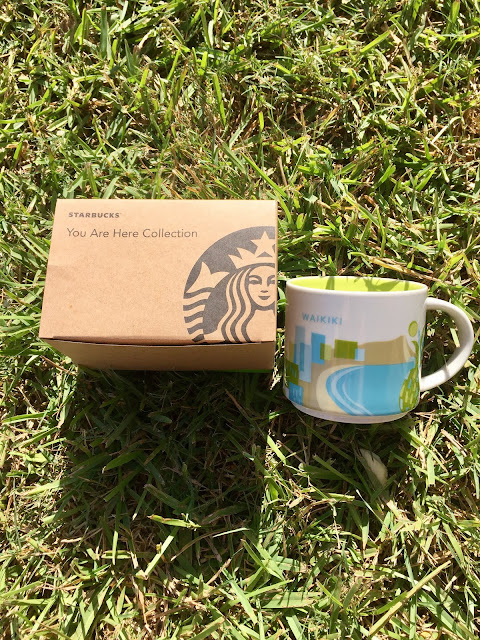 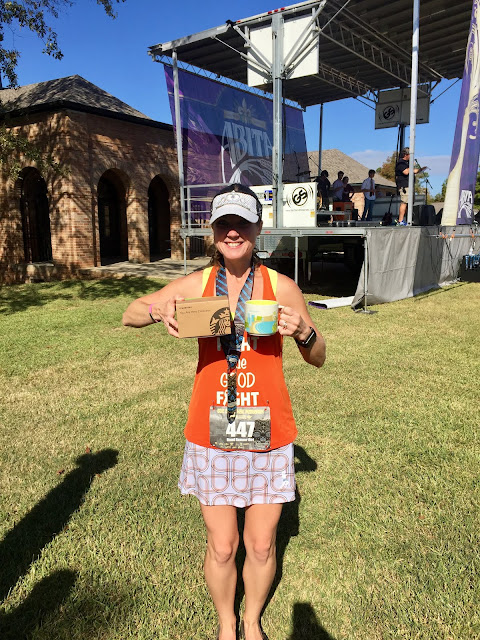 The after party was amazing like always! There was lots of yummy food! I had a bowl of jambalaya and a peanut butter smoothie sample! Yum! There was also a live band like always and they were amazing!

Once everyone finished we talked for awhile with everyone and then we headed to the car.

Donna and I got back to the hotel. We had a late check out so we were able to get showers! Yay! We dressed in our race shirts and then met Sherry, Mindy S., and Rachel at Zea's for lunch. By this time I was starving y'all!

I was so hungry that I FORGOT to take a picture of my food!!! But I had an amazing cheeseburger, grits, and french fries! So good! 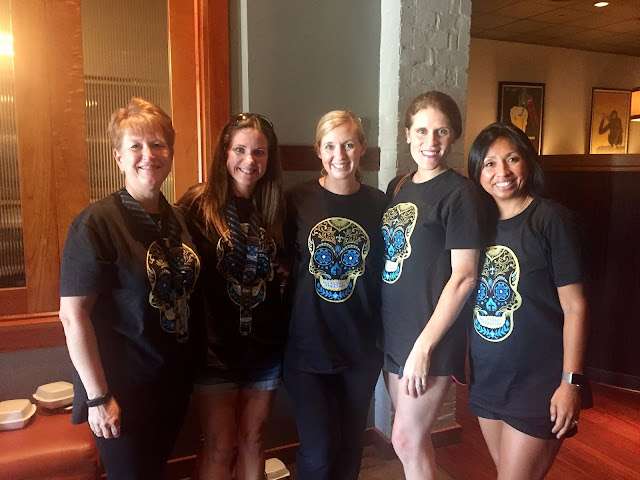 After lunch we headed next door to Starbucks for some coffee for the drive home! I had earned that Venti Coffee Frappuccino Light! 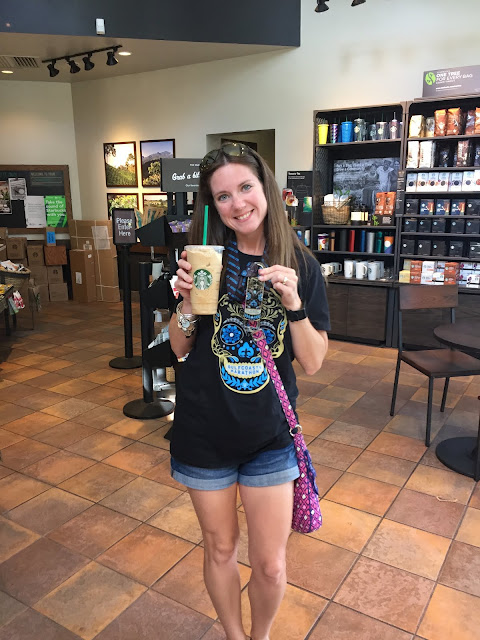 It was such a fun race weekend! I was so shocked and amazed at my PR! I seriously never thought I would beat my previous time! Hard work really pays off y'all! I am also going to say that I think the strength training helped this PR happen as well as my training!

QOTD: What is your favorite indulgence after a race?