So technically this was week 7 but since I skipped my long run the weekend we were in Disney I decided it was really week 6! ;-)

I was pretty excited because this would be my last really long run before the race. 12 miles was on the schedule!

I was also looking forward to this run because it was supposed to be cooler weather that morning!!!

But first...Friday night happened. I was on a walk with the hubby and Archie and it was really dark where we were walking. That really creeped me out. Then my hubby said, "Watch out!" The first thought that came to my mind was snake! So I screamed and did a little dance....and then saw a roach. Well...I'm scared of those too y'all! But I ended up landing weird and felt a twinge in the top of my left foot. We finished the walk and I never thought about it again....until I woke up the next morning. My foot was pretty sore. I was worried because I had 12 miles to run! I decided to at least get my run in for my run streak and to keep going if I felt like the foot was ok.

First of all...the weather was perfect! It was 57 degrees outside!

I started running and even though I could feel the soreness the foot seemed like it would be ok.

The sun was just starting to rise when I started the run. 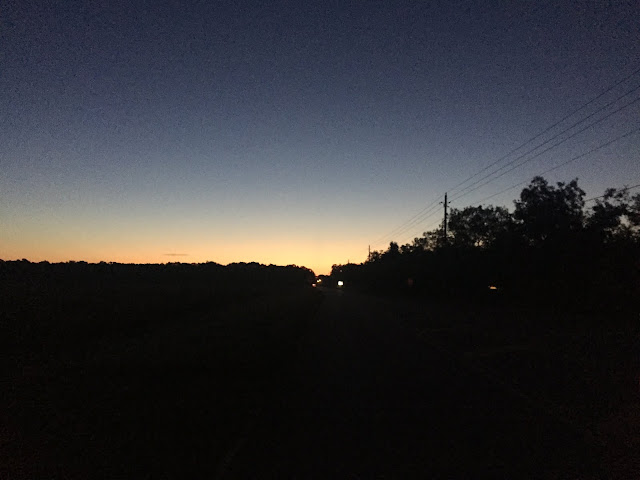 I had decided to run the same route I've been running for most of my long runs. It's perfect because I can drop water on my friend Donna's front porch and use it as a double water stop. Plus the route is pretty!

Before I knew it I was at mile 2 and in the first neighborhood on the route. 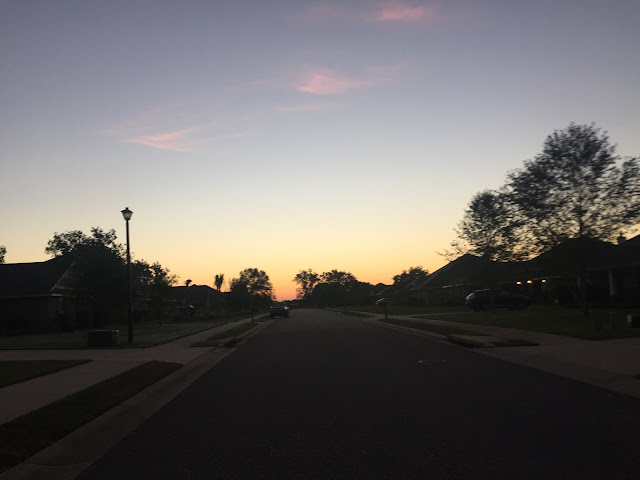 I did the loop in there then headed back out. I only had a few feet to go and then I turned into Donna's neighborhood and stopped for water (at about mile 3.25). When I got to her porch my water had been put in a cooler of ice! (Thanks so much Donna and Gary!!!) And when I opened the cooler not only was my water in there....but there was also coconut water in there! Thanks again y'all!!! I'm so blessed with such great friends!!! 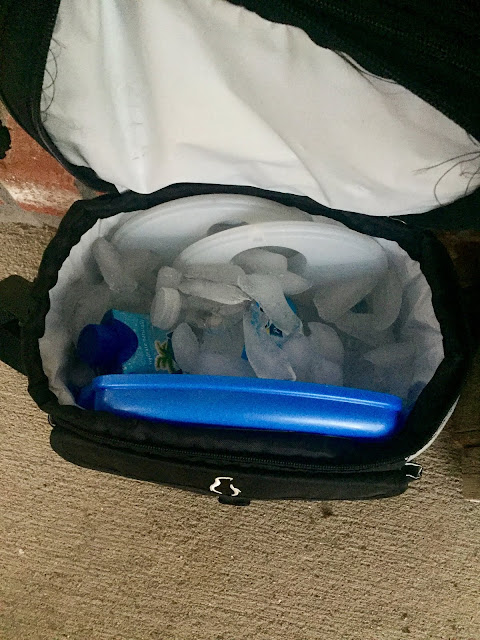 I finished my water and then headed back onto the road. I was turning the curve in the neighborhood and there was a huge German Shephard dog in one of the driveways. He saw me and started barking. He wasn't growling but definitely was defending his territory with the bark. As I got closer he started to run towards me. I slowed down and pointed at him and yelled in a firm voice, "No! Go home!" He immediately stopped. I kept running. I glanced back and he started running towards me again. But I pointed my finger at him and he stopped. Then he started sniffing the ground. Whew! He didn't come after me again.

I turned onto the road that I don't like very much because it's long and seems never ending. But I had a few miles to run on it so I tried to enjoy it! I do love the scenery on the road! There's fields and cow pastures. And the sunrise was pretty! 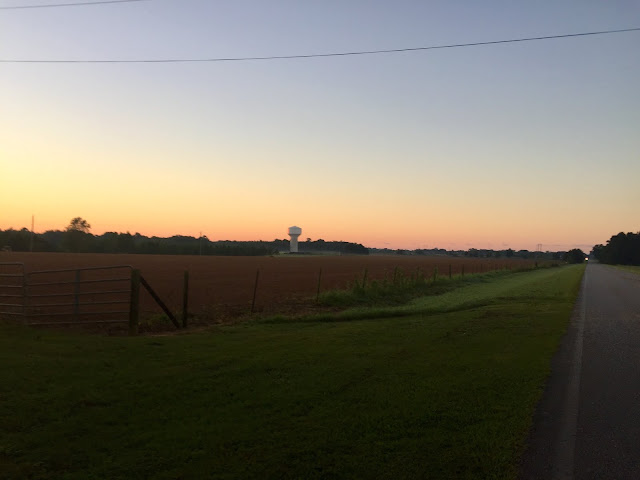 I also passed by the cutest little house that I haven't noticed before! I snapped a quick picture as I ran by! 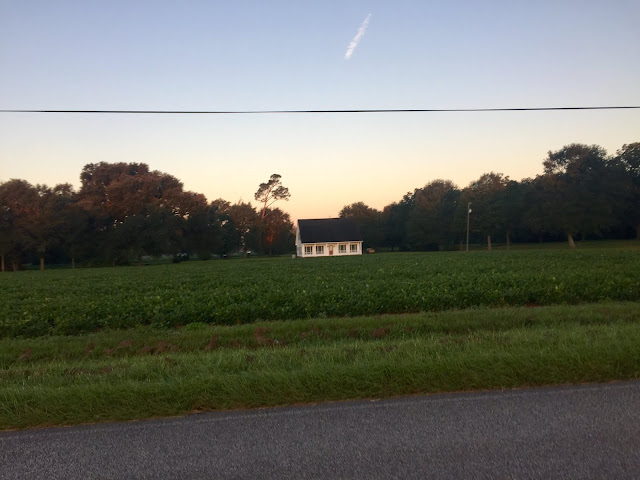 Not too much longer after that it was time to turn into another neighborhood. This was my friend Lora's neighborhood and she was doing a yard sale that morning so I had a feeling I would see her. I came close to her house and there she was with two of her kids! Her son noticed me first and waved and then got his mom. She was surprised to see me! I didn't stop though since I had miles to go! She asked me if I needed anything as I ran by and I told her I was good.

I finished the loop in the neighborhood and turned back onto the long road to head home. I was halfway done! My foot was hurting some but it was bearable and didn't seem to be getting worse. So I kept going. I was having such a great run other than the foot!

There were tons of birds in this field! I'm not sure what they were after but there were so many of them! It's hard to see them but they are there. And they were loud lol! 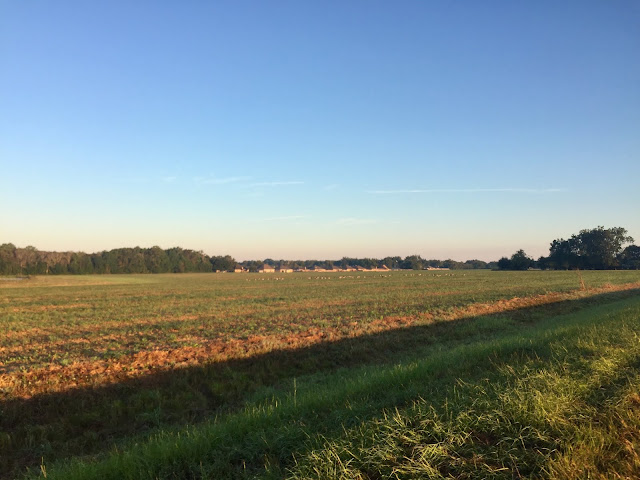 I snapped this picture while running because it really is a beautiful road to run on! 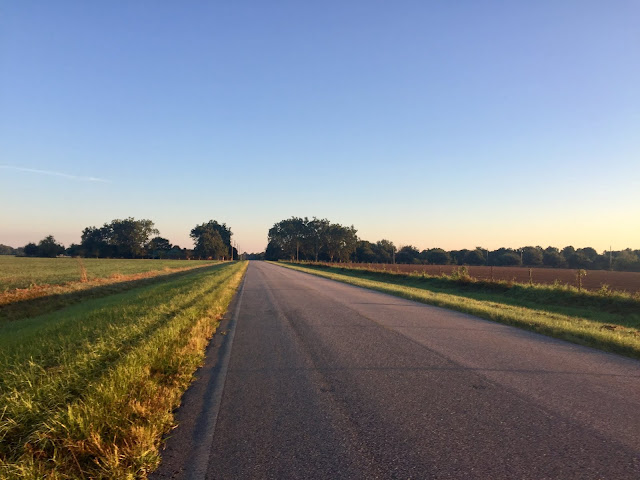 At this point I had to pee so bad! I guess the water was going through me! But there was no where to go. I knew if I could make it to mile 11 there were bathrooms there since it was in the ball park. So I kept going and tried to forget about my bladder lol!

Around mile 7.5 I took a quick running selfie! ;-) And it was a ploy to get my mind off needing to use the bathroom lol! 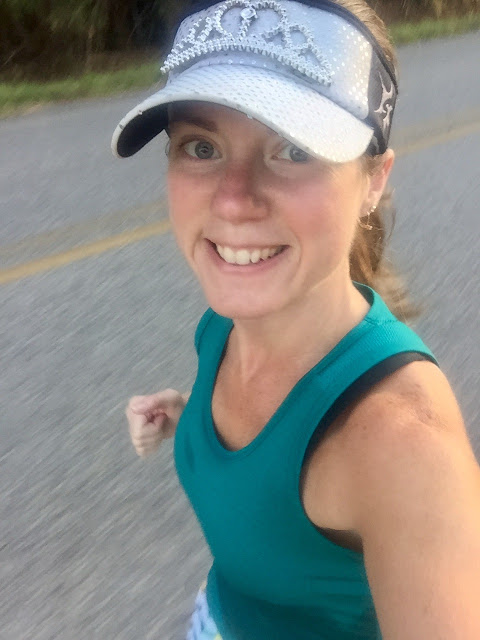 Then I headed back into Donna's neighborhood. I was praying the dog wasn't there anymore and luckily he wasn't! His owners must have brought him inside. Whew!

I stopped for my last water stop. When I got there Donna's husband Gary had refilled my water bottle (I'd only drank half of it the first time so I would have some left for this stop) AND he left a note that the door was unlocked in case I needed a bathroom break! So sweet!!! 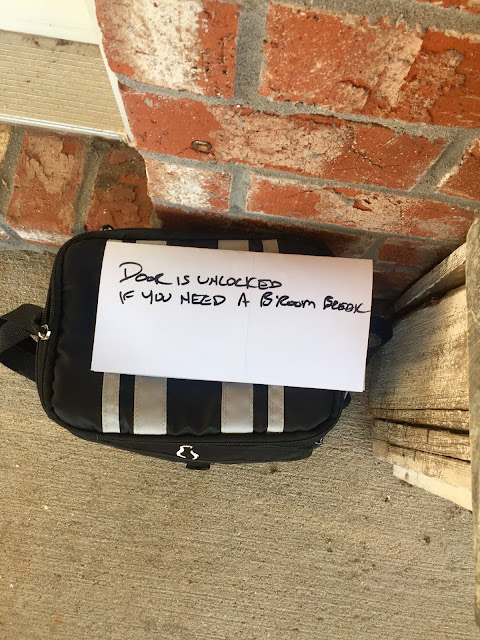 Yes I know I said I needed to use the bathroom so bad but I didn't want to go into Donna's nice and clean house dripping with sweat. I only had 3 miles (4 left in the run) before I would be at the bathrooms in the ball park. I could make it!

So I drank some water and then started my run again! But y'all! I made a mistake! I pressed the WRONG BUTTON on my Garmin and instead of continuing my run it saved it instead!!! Ugh!!!!!!

So I had to start another run. I was so mad! I really wanted to see that number 12 on my Garmin!!!!!

There was nothing I could do though so I just kept running. Now instead of the number 12 I would be looking for number 4.

I was so close to being there when I took this picture. I had about 2 miles left. 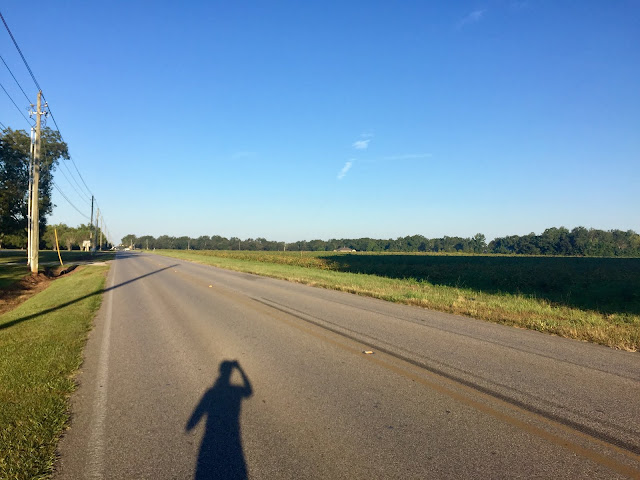 Finally I made it to the ball park...and it was super busy with lots of traffic. Apparently there was a soccer tournament and I got there around the same time as the players needed to be there. But I kept running and just paid attention to the cars that were looking for parking spots. Luckily they were going really slow so it wasn't too bad.

I got close to the bathrooms and realized I didn't really have to go anymore! What??!! So weird! So I kept running and finished my run! 12 miles was DONE!!!!! The best part....I felt GREAT the entire run (except for my foot)!!! 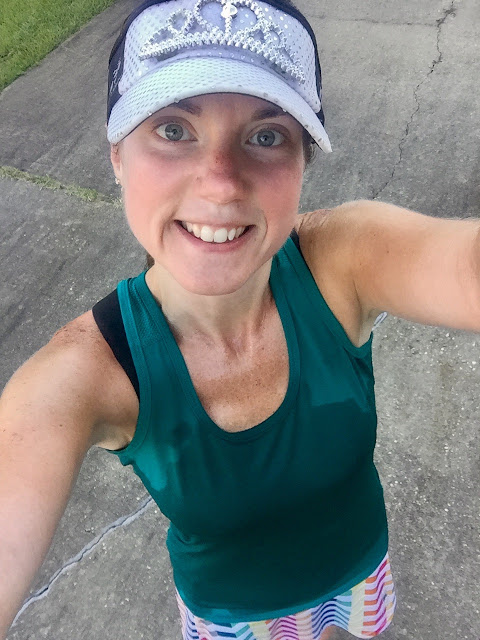 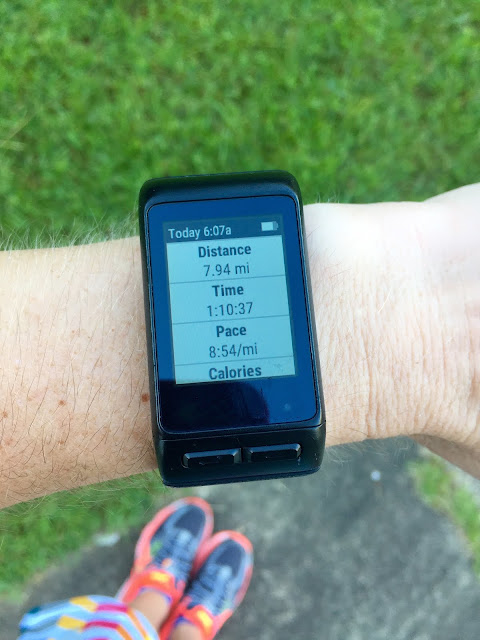 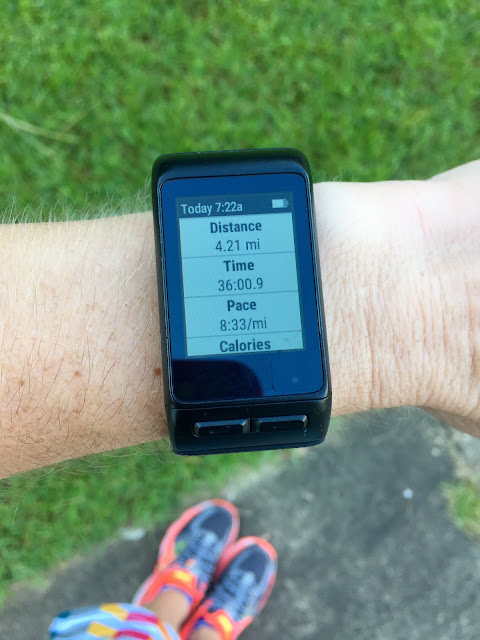 Still so mad that I didn't hit the correct button on my Garmin!

I was really happy with those stats!!!!

After my run my foot was hurting pretty bad. I was so thankful I was able to run my 12 miles. But the rest of the day my foot hurt. I iced it and took Aleve but I was really worried. I stayed off of it. It basically ruined our Saturday because I knew I needed to rest it and not go anywhere.

Thank goodness though...the next day I woke up and my foot felt so much better! It was still a little sore but nothing like it was the day before. And it didn't hurt at all during my short run that day! Praise God!!!

I was so thankful for a great last long run! Now it's taper time! I can't believe my half marathon is in less than 2 weeks!!!!

QOTD: Have you ever hurt something on your body and worried you had seriously injured yourself?