In case you missed my other Memphis posts:Day 1 and ExpoThe Memphis Race That Wasn't in MemphisSt. Jude Children's Research Hospital Tour
Day 2 and Heroes Pasta Party

Saturday morning I felt really weird when I woke up. I was supposed to be running a half marathon that day! But due to the ice storm it was canceled. So we slept in and took our time getting ready. Originally we weren't supposed to leave Memphis until the next day. We had planned on celebrating our race in Memphis that night. But because there was no race we decided to leave a day early.

When I checked the weather I was pretty grateful for my warm hotel room! Running in those temps (feels like 9 degrees!!!) was not something this Gulf Coast girl would be used to! 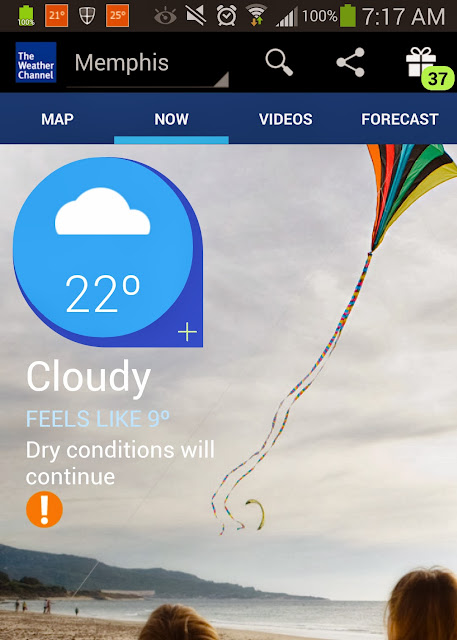 In our hotel lobby we saw several runners that had gone for a run that morning anyway. Some of them ran part of the route. I talked to a few ladies that ran 11 miles. They said the race officials made a good call in canceling the race because they came across several places where it was pure ice and they had to stop running and tip toe to get through it. They also said while they were running that a tree branch fell down right in front of them because it was so heavy with ice! Luckily they didn't get hurt. Hearing their stories made me feel even better about the cancellation. Safety first!

The event was held in The Peabody Hotel...which was convenient for us because it was right across the street from our hotel! When we arrived the volunteers were very friendly and gave us three tickets to use at the vendors of our choice. They had all kinds of food vendors there including Panera Bread, Smoothie King, McAllisters, and Moe's Southwest Grill. 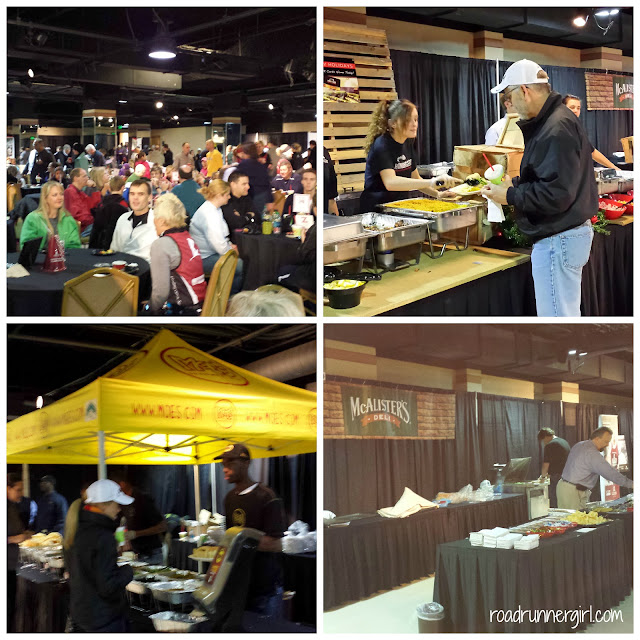 Before we ate we went to get our Finisher shirt. These were originally supposed to be for sale at the finish line. But because there wasn't a finish line...they just gave them to us instead. Wow! They had run out of my size so I had to get the next size up. It's a little big on me but I was still grateful to receive it. 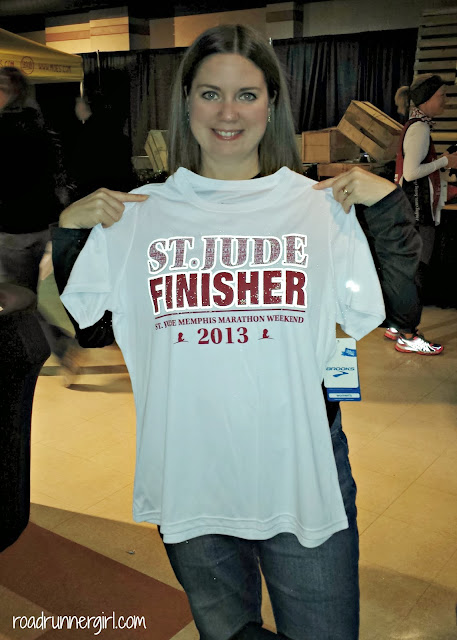 After getting our shirts we set out to find something to eat. I chose Moe's Southwest Grill. The taco salad was so yummy! 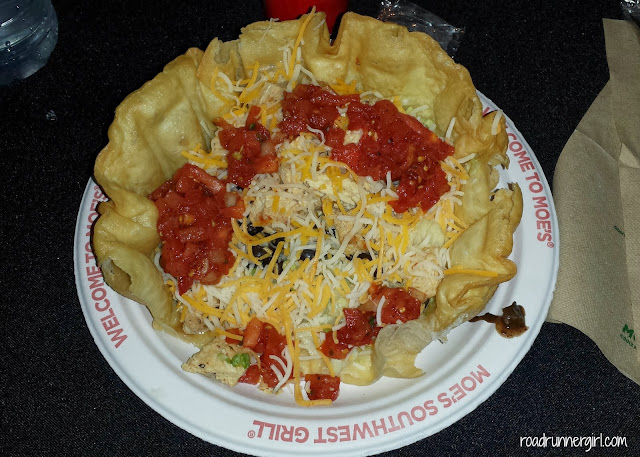 The table decorations were super cute and inspiring! 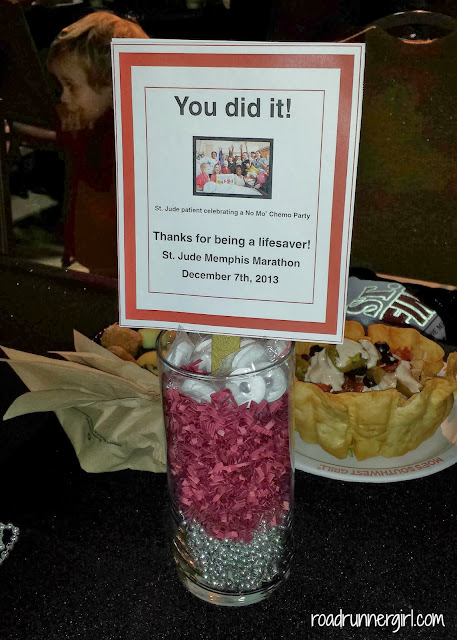 After eating my taco salad I decided not to waste my other tickets. So I got a smoothie from Smoothie King. Then I also got a sandwich from McAlisters....which I wrapped up so I could eat it in the car later for lunch.

I also ran into my friend Robbie from Run 4 It! We were hoping to see each other at this race so I was so happy when I saw her! 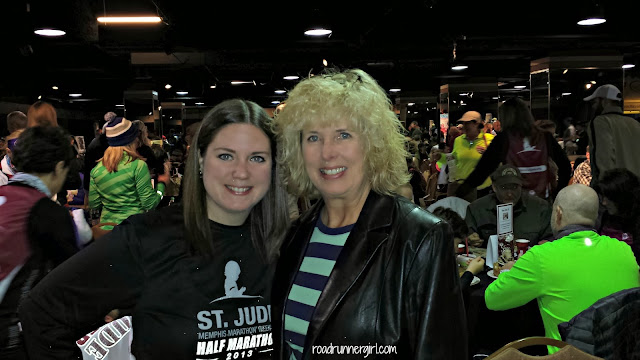 While I was talking to Robbie, the CEO of ALSAC/St. Jude, Rick Shadyac, came by our table. He thanked us for fundraising and for being there. He was such a nice man! I told him I totally understood his decision to cancel the race and thanked him for everything he does. He said it was one of the toughest decisions he's had to make. 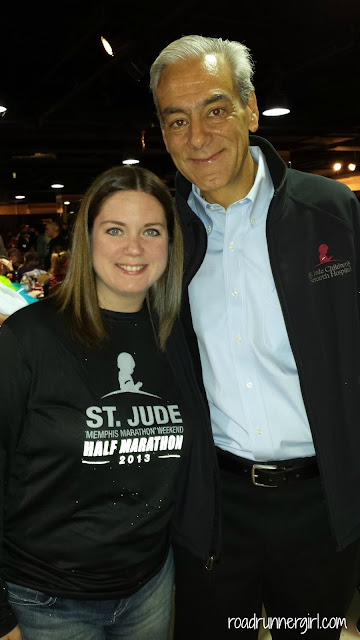 On the way out Holly, Melanie, and I stopped to take a few pictures in front of the HUGE and gorgeous Christmas tree in the Peabody Hotel! 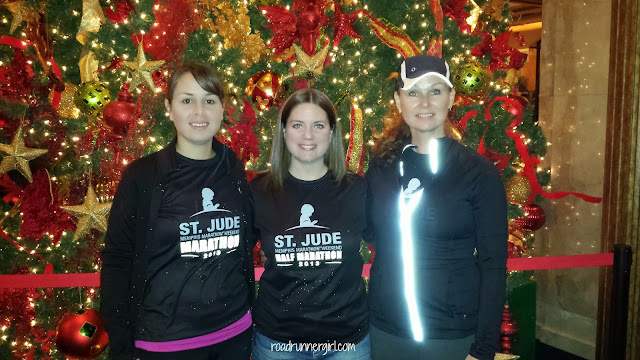 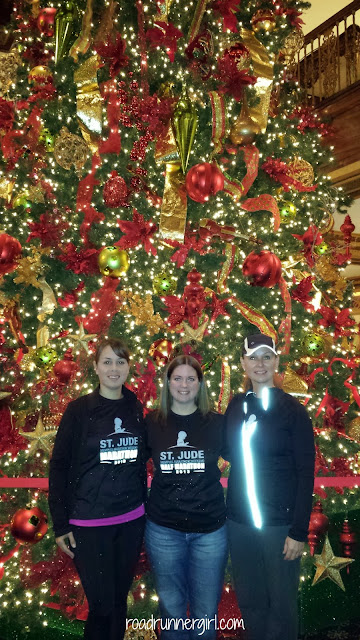 The St. Jude VIP Heroes Lounge was great! I'm glad I got to experience it! I really believe St. Jude did an amazing job trying to make it up to the runners for the cancellation. They let every Hero attend the VIP Heroes Lounge. They gave us our finisher shirts that we would have normally had to purchase. They gave us three options to choose from in regards to our race registration:

St. Jude definitely handled the cancellation well! I am so impressed with their professionalism and care for the runners! It makes me definitely want to fundraise again and run this race in the future!

QOTD: What is your favorite part of a race weekend?