After running the half we headed back to the room to get cleaned up. The shower never felt so good! I was starving so we headed to the resort cafeteria to eat. For some reason I wanted a grilled chicken sandwich and salty fries! So that's what I got and it was delicious! Then we boarded the bus and headed to Epcot!

I didn't take many pictures on this day...I guess I assumed I had tons of pictures in Epcot from the race lol! The first thing I wanted to do though was to see (MORE) characters! As a Disney Visa card holder, I headed to the cardholder character spot. And there was zero wait! :-)

You never know which characters will be there. So I was so happy to see Minnie Mouse (my favorite) and Pluto! I told Minnie all about running her race the day before! And I showed them my Donald medal...which Pluto licked lol! 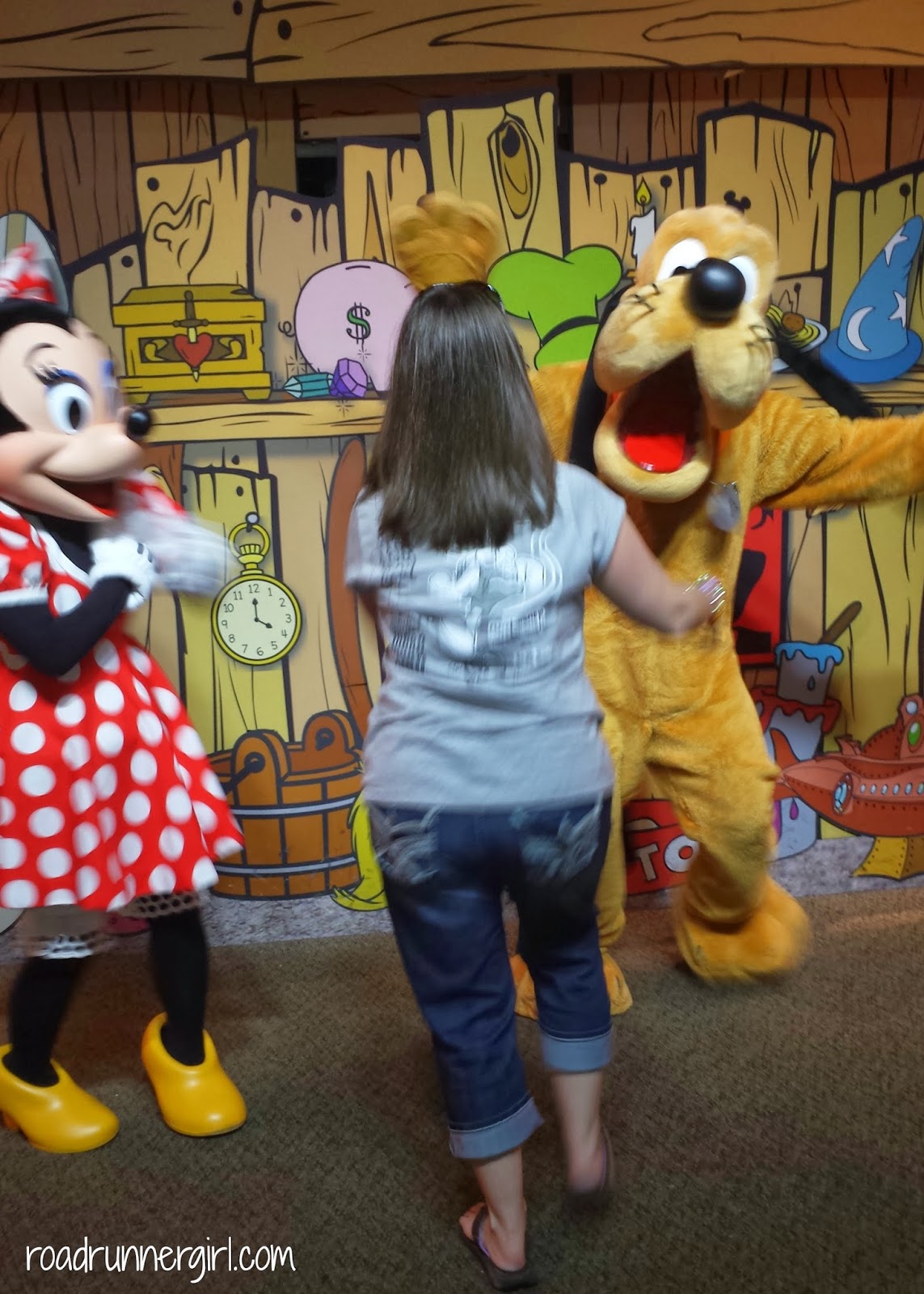 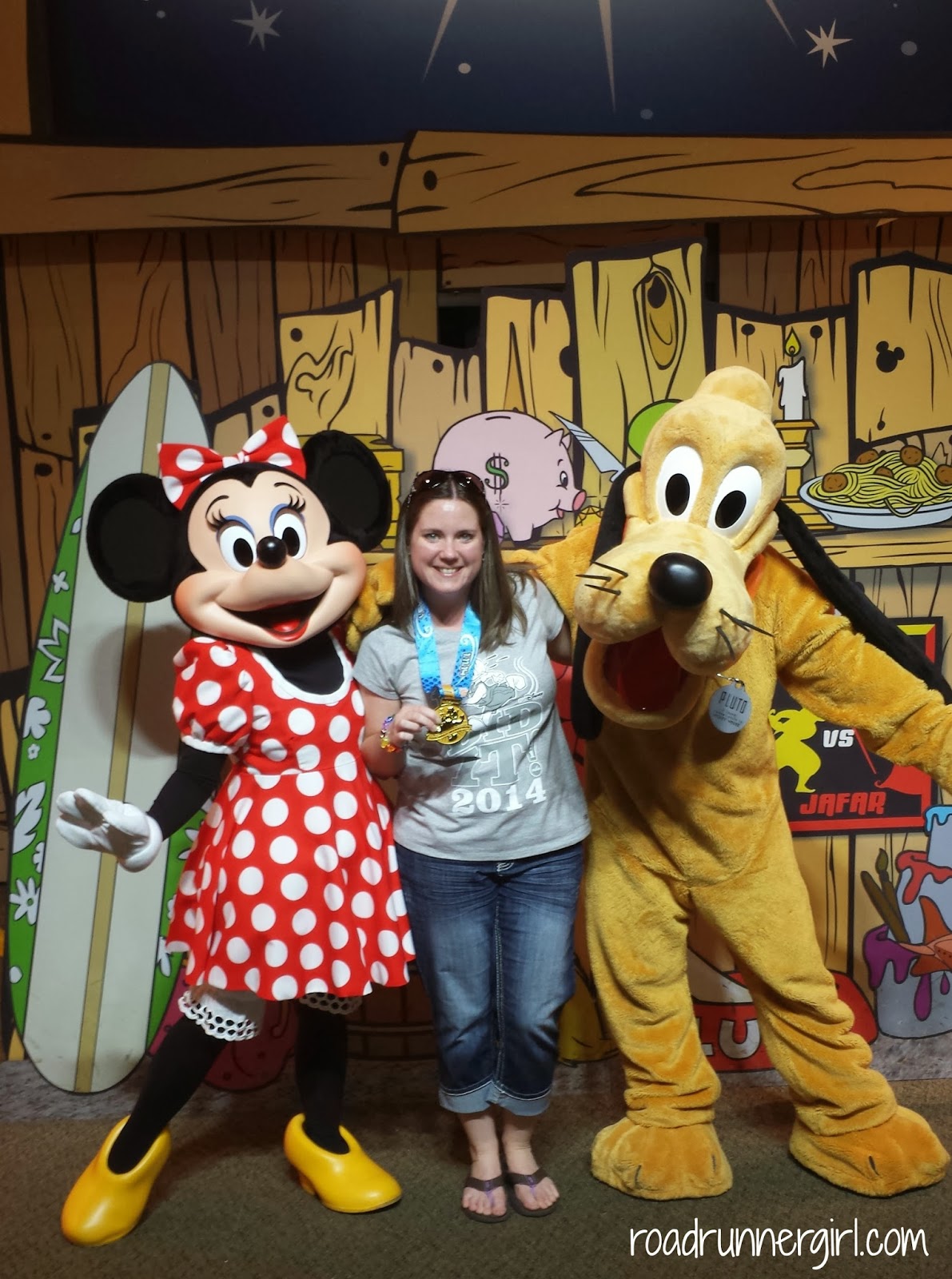 After playing with Minnie and Pluto we headed to ride some rides! We ended up getting Fast Passes (using the new Fast Pass +) for Spaceship Earth (which we really didn't need one for but it was one of our choices), Mission Space, and Soarin'! Soarin' is one of my favorites! We also rode Test Track as single riders...which meant no wait time! I was excited to ride it since it was closed this summer due to technical difficulties. And I haven't ridden it since it's been redone. It was super fun! We rode a ton more rides. There were hardly any wait times. It was heavenly!

The rest of the afternoon and evening was spent in the World Showcase! It was fun to enjoy it as an adult with no kids! And we even got to see more characters because the lines were super short! They were all pretty impressed with our medals! 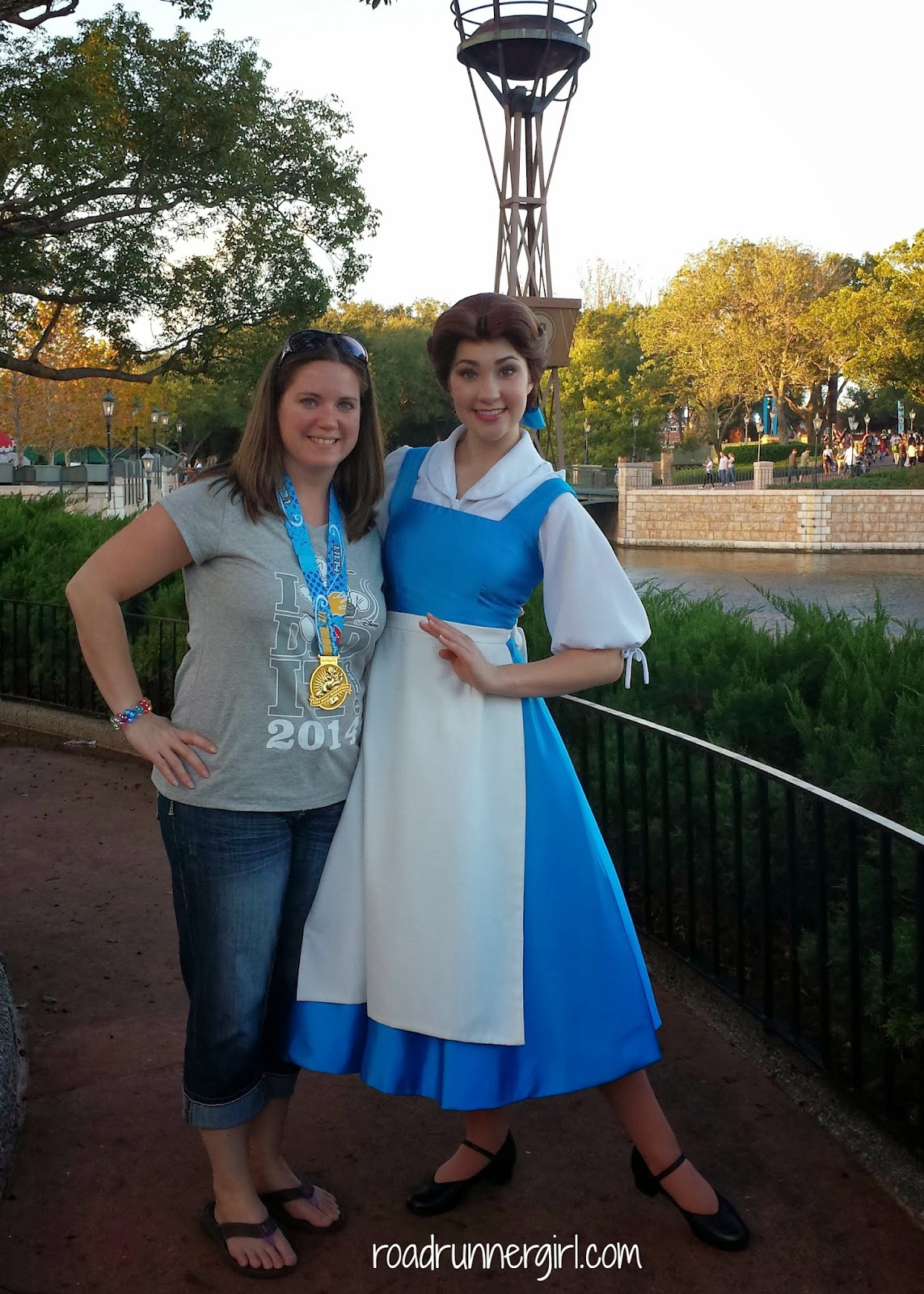 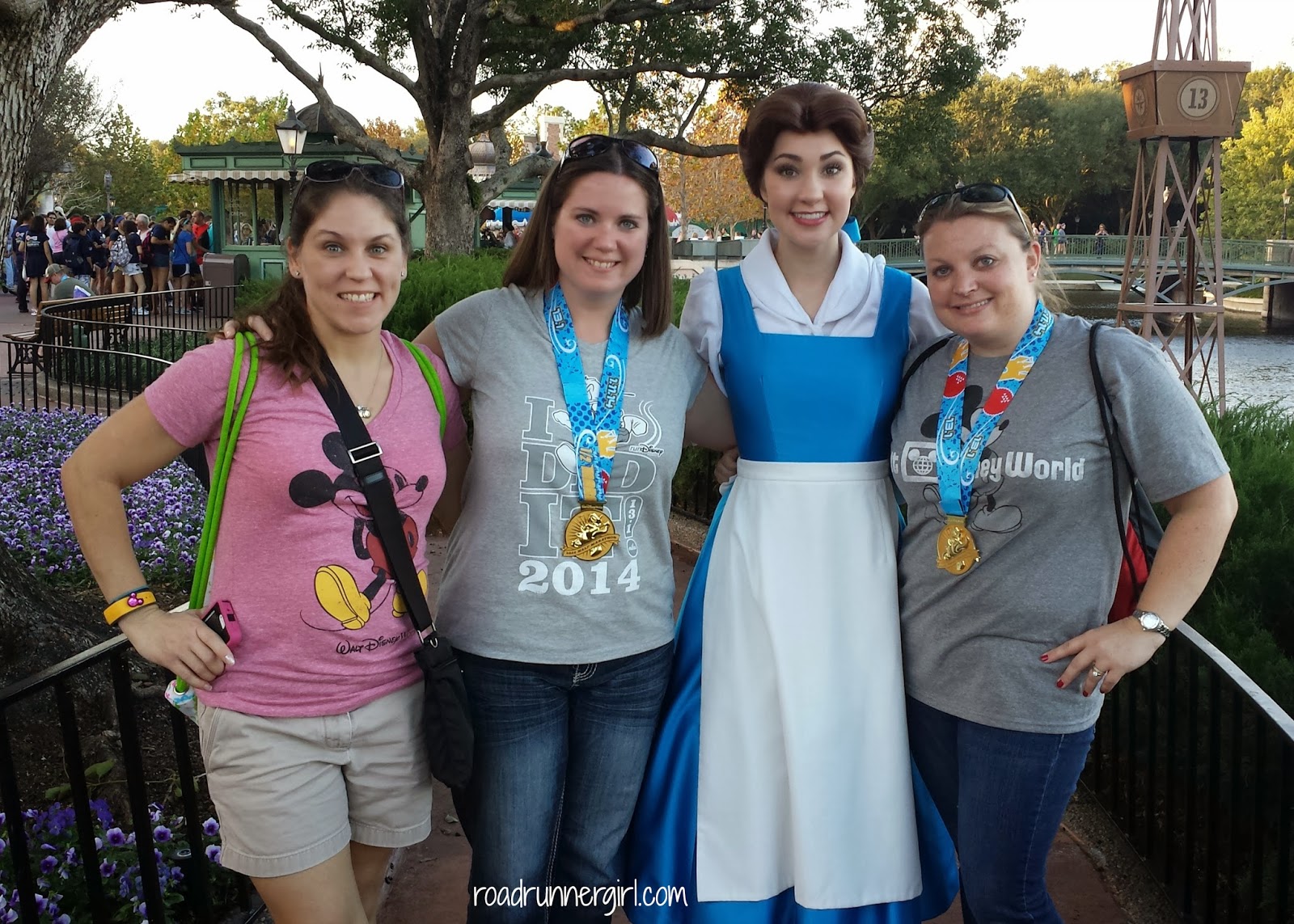 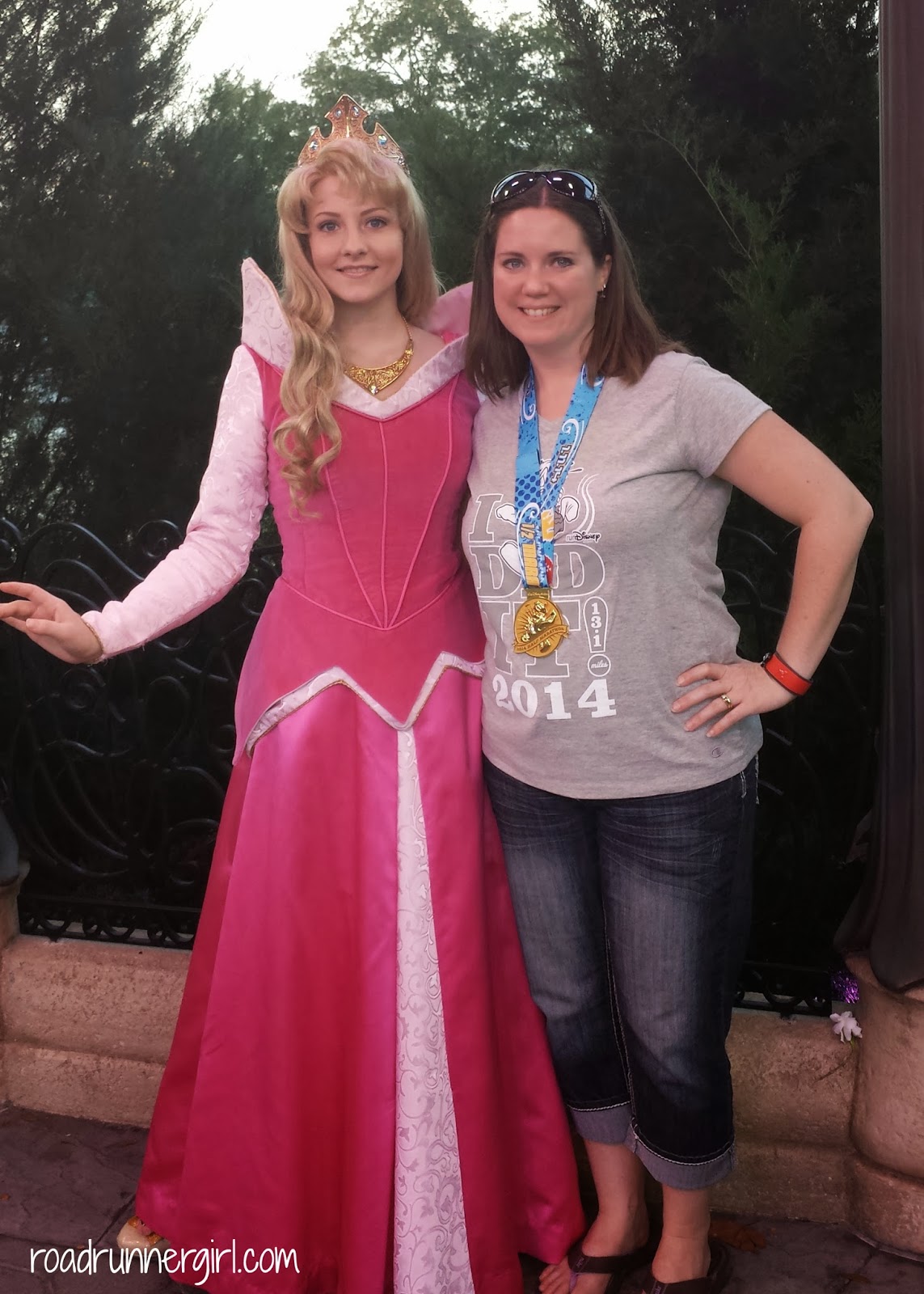 At dinner time we decided to eat Italian. We headed to Tutto Italia Ristorante. I had eaten here a long time ago and remembered it being good but boy was I in for a treat! I ordered the Ravioli di Ricotta. It had chicken, pancetta, and parmesean in it and it was the absolute BEST THING I HAVE EVER EATEN!!! And did I take a picture? NO! I could kick myself! Seriously, my mouth has watered several times since then wanting that dish! It was so good!

While we were eating it started storming outside! I'm talking wind blowing, thunder roaring, lightning flashing, heavy falling kind of rain! We had planned to stay and watch the night show...IllumiNations but we were just concerned about making it back to the buses. We had no umbrellas or ponchos. And we were all the way in the World Showcase area...the back of Epcot! The radar was showing a ton of rain coming through but we spotted a tiny break in there so we were hoping that would be our chance. And luckily...it was! We walked through Epcot (with no rain falling) while watching what we could of IllumiNations. We made it to the buses and to our resort without getting rained on! It was a Disney miracle lol!

We decided to call it a night once we got to the resort. Sandi and I were pretty tired from being awake since 3AM AND from running a half marathon!

Stay tuned for our day in the Magic Kingdom!

QOTD: Have you ever been caught in a thunderstorm in Disney World? Every time I go there it rains lol!