After brunch at 1900 Park Fare, we headed to do some shopping at Downtown Disney! We were all on the hunt for those goodies for our little people back at home. Hayden absolutely loves Legos so a stop at the Lego Store was all it took to find something for him. Sawyer started pin collecting when we were in Disney this summer so I got him a few pins to add to his collection.

Shopping was a lot easier with the Magic Band! For those that don't know about Magic Bands they are everything you need for Disney all wrapped up in a bracelet that you wear. The Magic Band is your room key, your park ticket, has your Fast Passes on it, can be used as your photopass, and can store a credit card on it. When you arrive at Disney you create your own pin number that you will use each time you purchase anything using your Magic Band. So it's secure...no one else can use your band...they have to have the pin number to use it. Magic Bands come in a gray color but you can customize them before you arrive using your My Disney Experience app or online. And you can even buy little accessories to add to your Magic Band! We added some extra bling to ours! 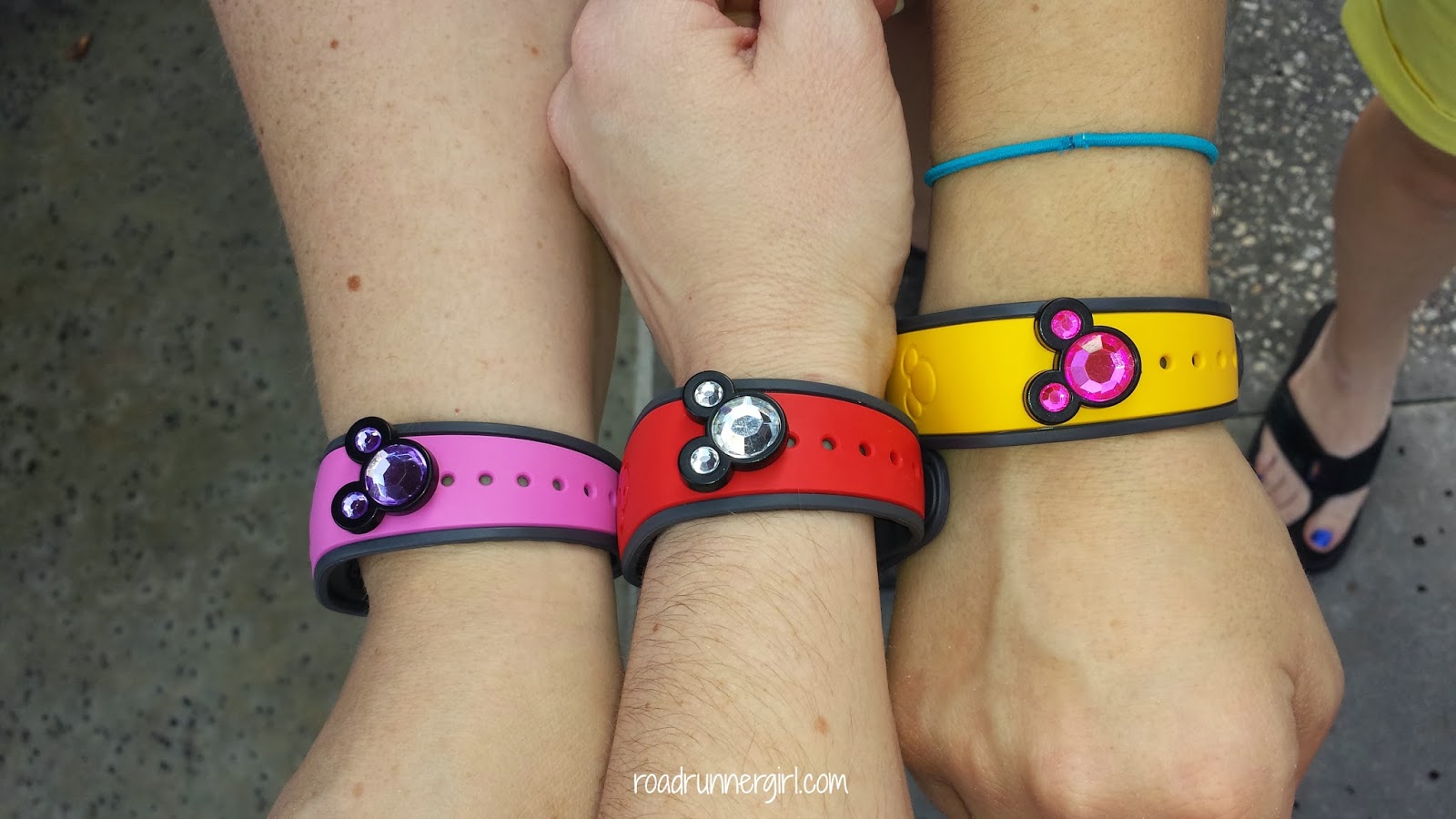 I had a few hiccups with my Magic Band though. First, my Fast Passes wouldn't show up in my app when we were at Epcot. Luckily a cast member with an iPad helped fix it to where it would work. 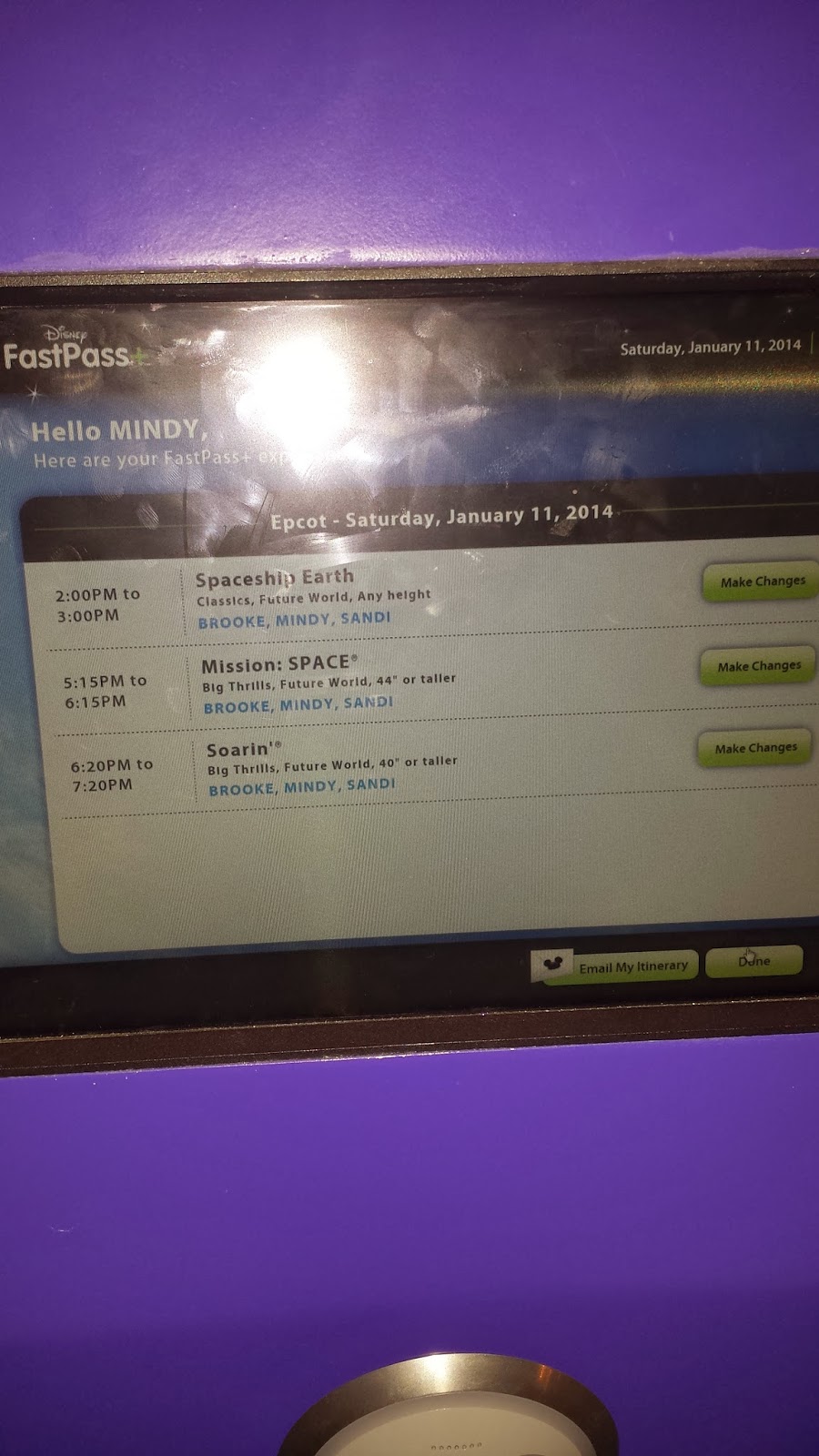 Little did I know that in fixing it that he would create other problems for me. The next day I went to pay for breakfast and my pin number no longer worked. This worried me because we were headed to The Magic Kingdom that day and I was worried about my ticket not working as well as the Fast Passes we had set up online. I went to the Concierge desk and an awesome cast member helped me fix the problem. She thought it was weird that my pin number disappeared. But she assured me that my tickets and Fast Passes were all still linked. And...she warned me to stay away from the cast members with iPads! ;-)

When we arrived at Magic Kingdom....just as I expected my Magic Band didn't work (it worked beautifully the day before in Epcot). But a cast member immediately scanned my Magic Band and found my info and said I was good! Luckily my Fast Passes worked!

So Magic Bands are AWESOME...when they work correctly! I know Disney has been testing these for a while with people staying at resorts but come February everyone will have a Magic Band if you want to go to Disney World.

Magic Bands definitely make shopping easier and more convenient! At Downtown Disney I used it to pay for all my purchases! You have to touch the Mickey to the Mickey on the kiosk and then enter your pin number. Then...bam! Your purchase is complete! This can definitely get a girl in trouble lol! 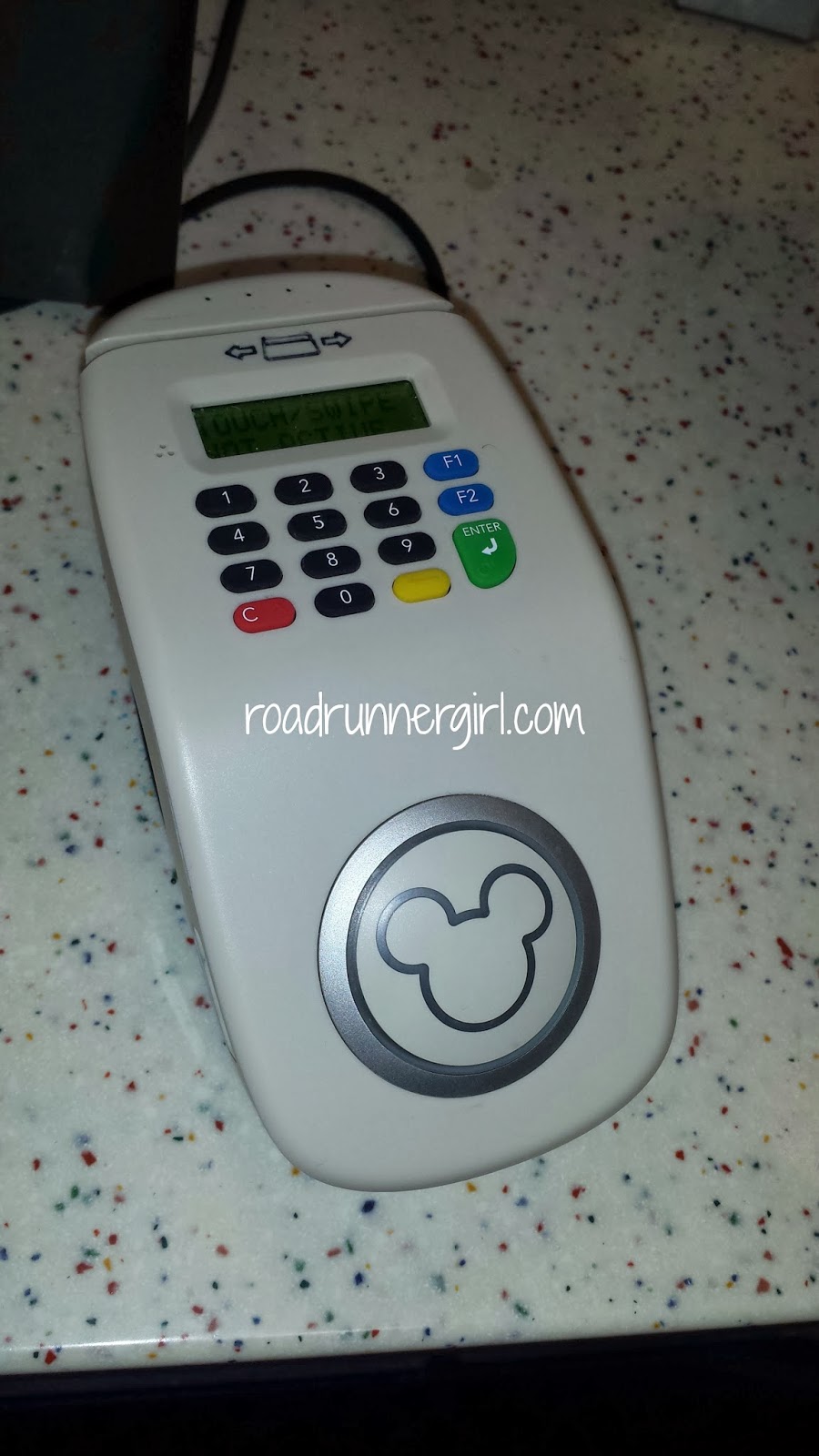 We had a blast shopping at Downtown Disney! I just love browsing all the stores! Other than getting my boys their goodies, I also picked up a Mickey topper to go on a co-worker's car antenna! I texted this picture to her because they were all so cute I couldn't pick one out for her! She chose the red, white, and blue one! 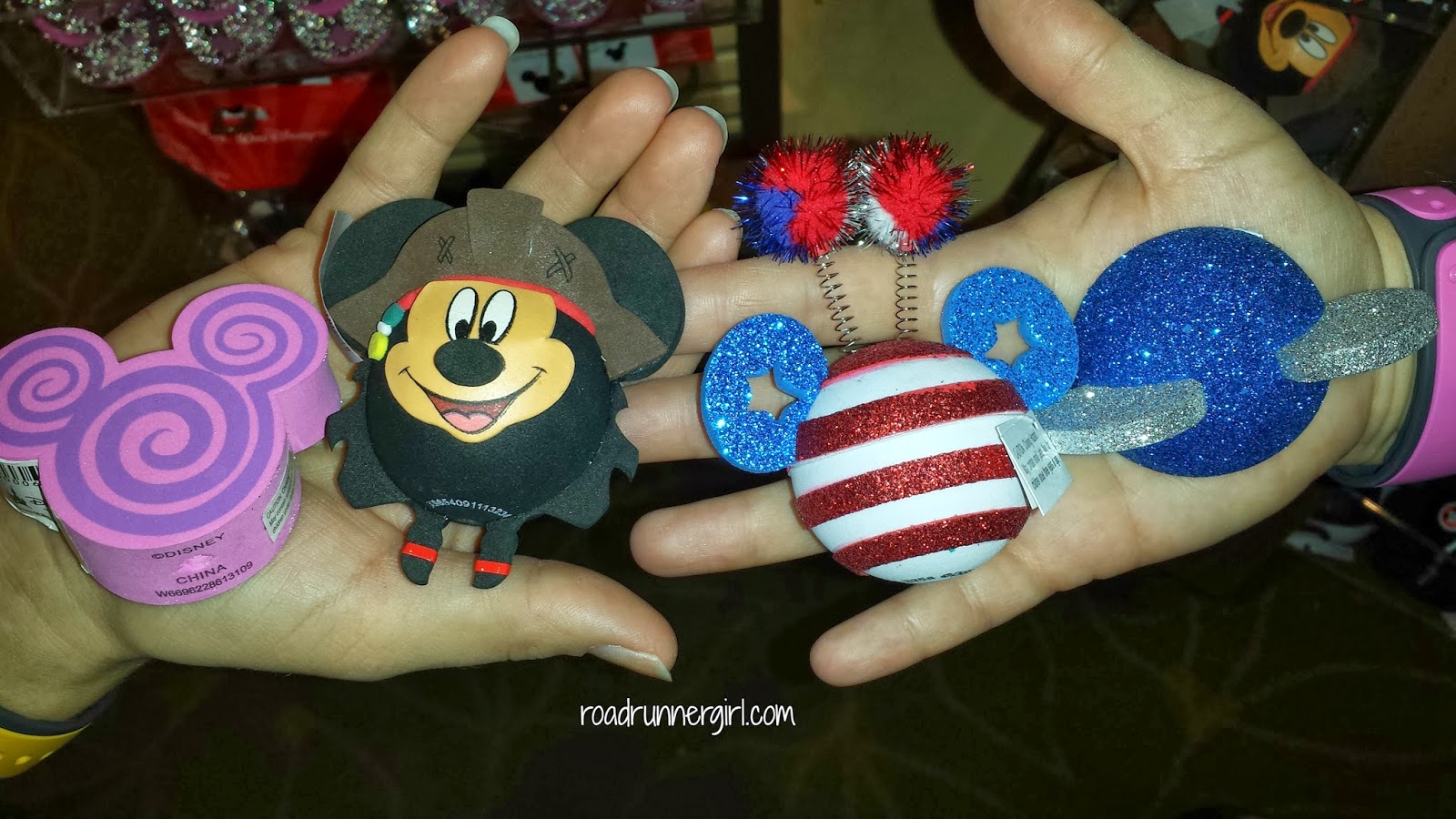 And I just LOVED these replicas of Cinderella's Castle! But check out those price tags! Yikes!!!! 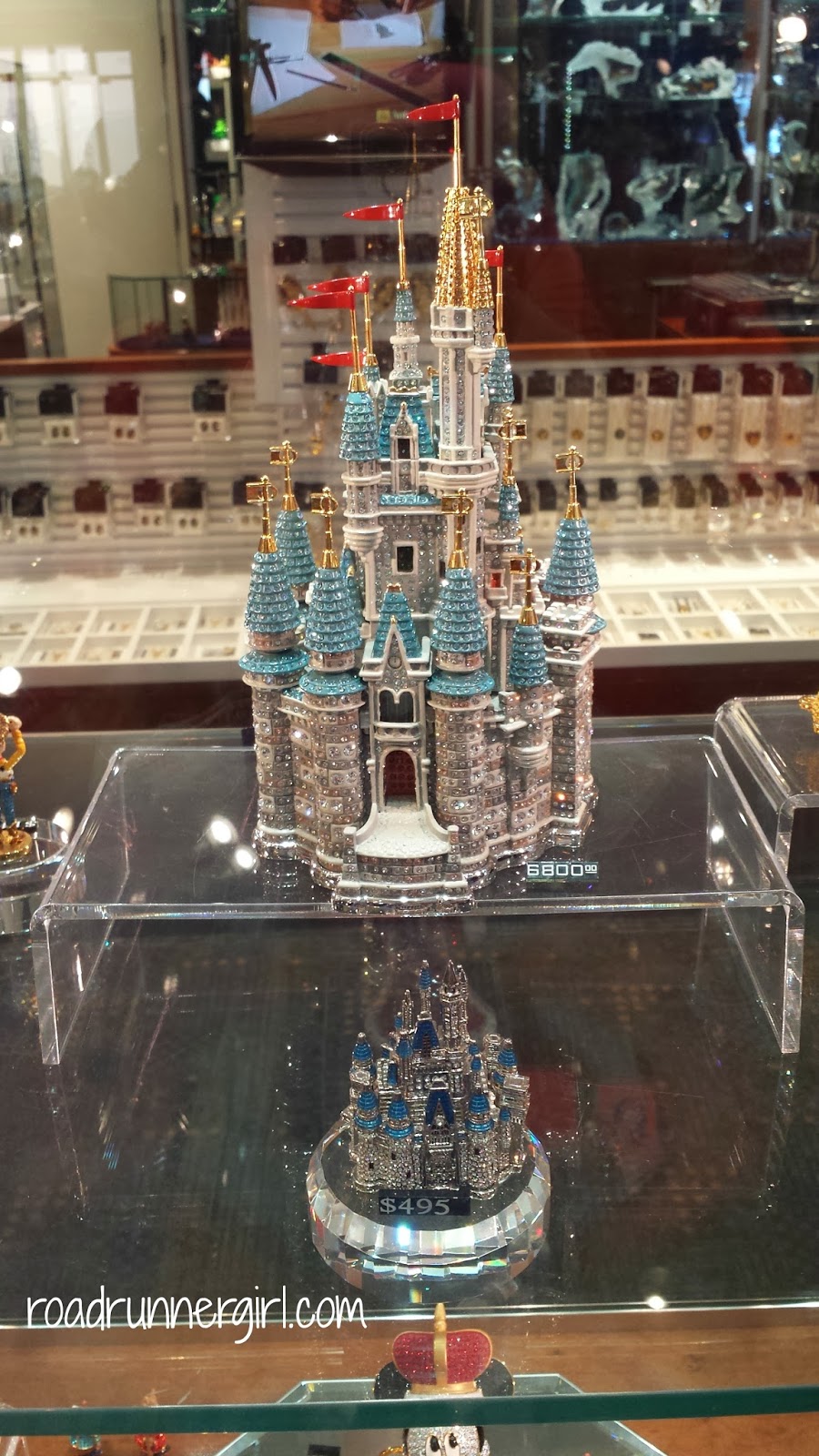 I bought a pair of Mickey Mouse sunglasses! I really wanted these when I was in Disney this summer with the family but I didn't buy them. I regretted not buying them so when I saw them this time I knew I had to have them! 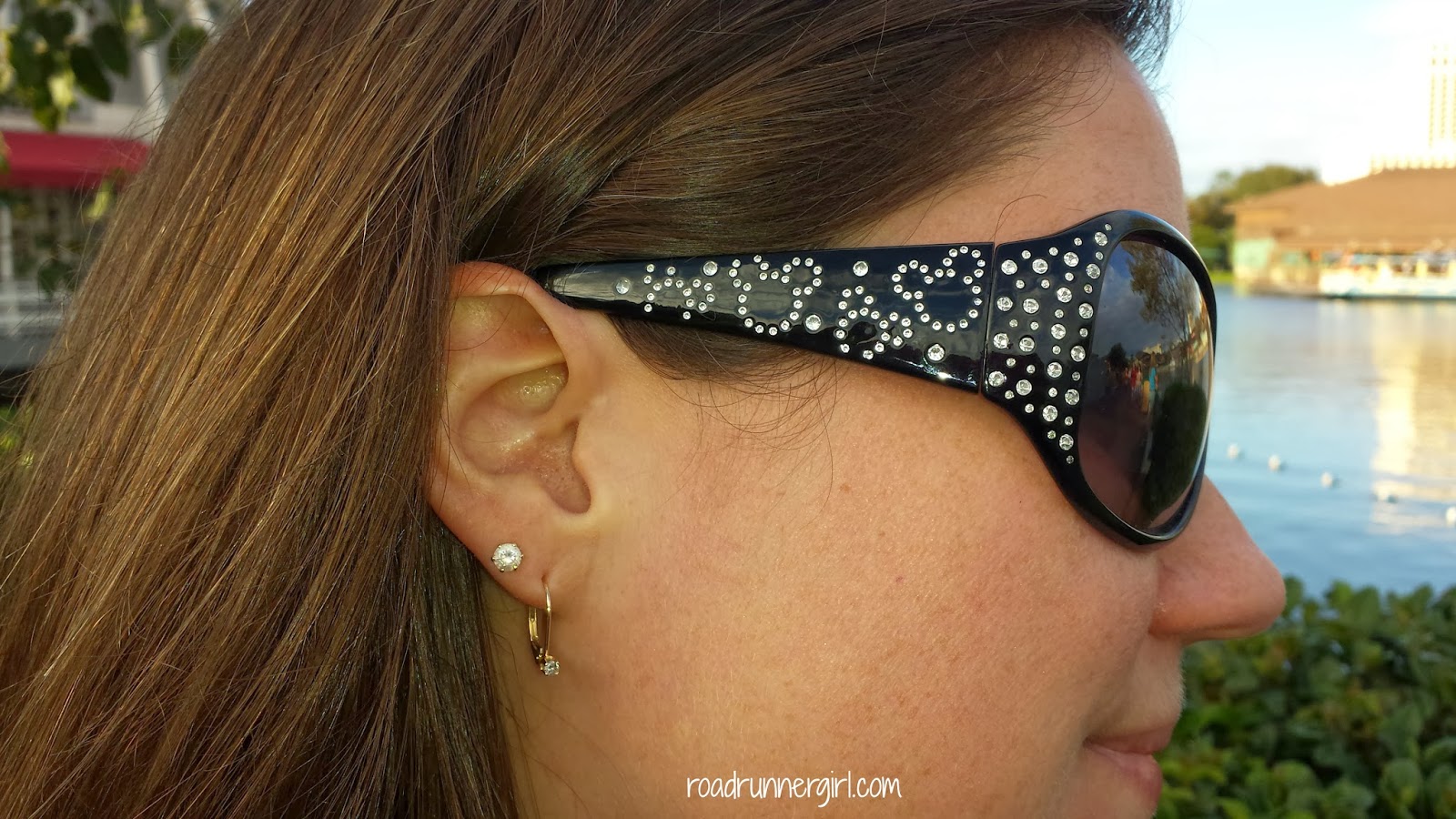 I'm also always on the search for Hidden Mickeys! I found this one on the checkout desk when I was buying my sunglasses! 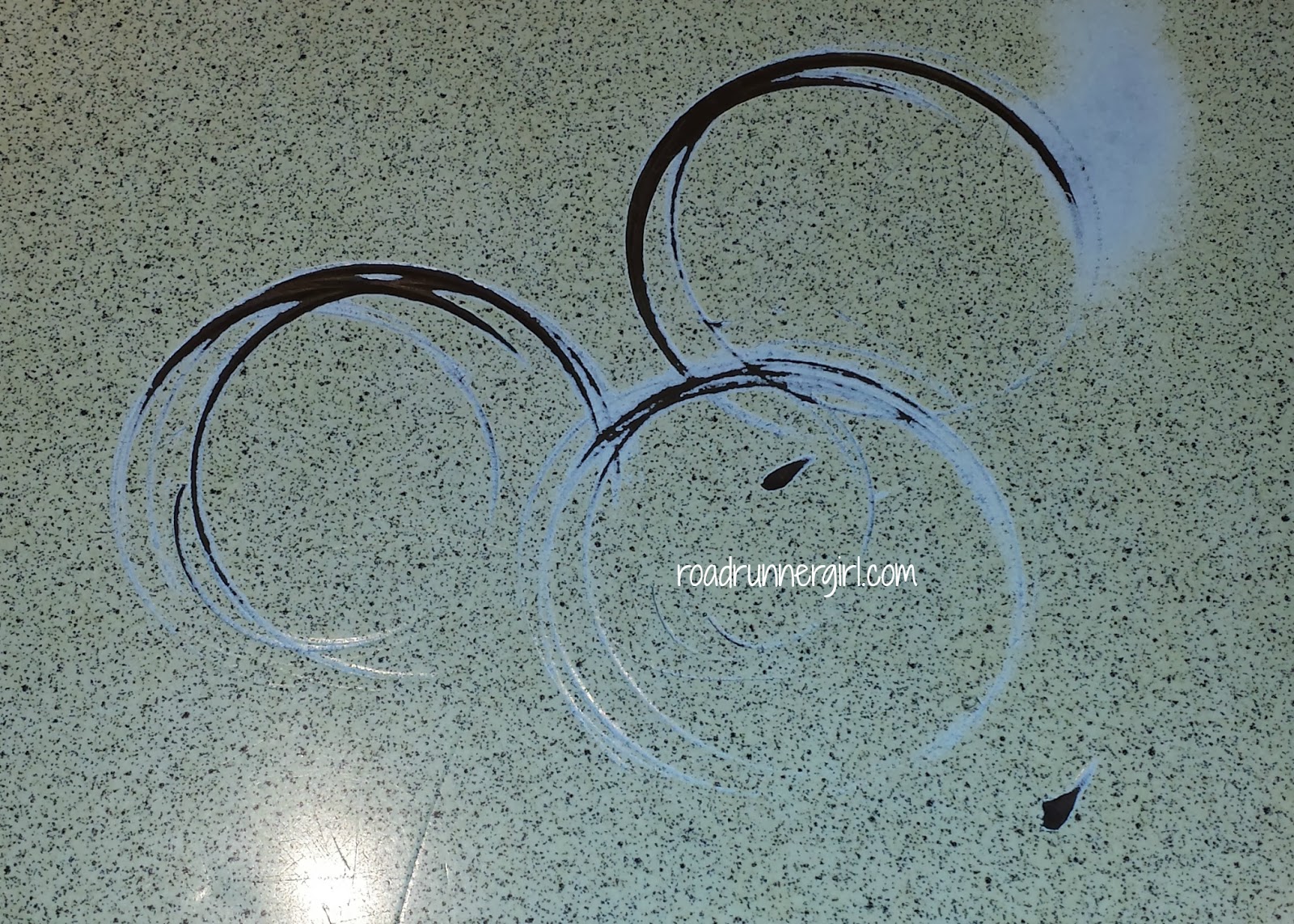 Shopping made us hungry so we headed to T-REX to eat a late lunch! I felt a little guilty eating here without my boys....they would have loved it! Every 15-20 minutes there is a meteor shower that makes the place come alive with "exposions" and rumbling! It was pretty neat! We were sat in an ice cave. It changed colors every so often! It was a great atmosphere! And the food was really yummy! 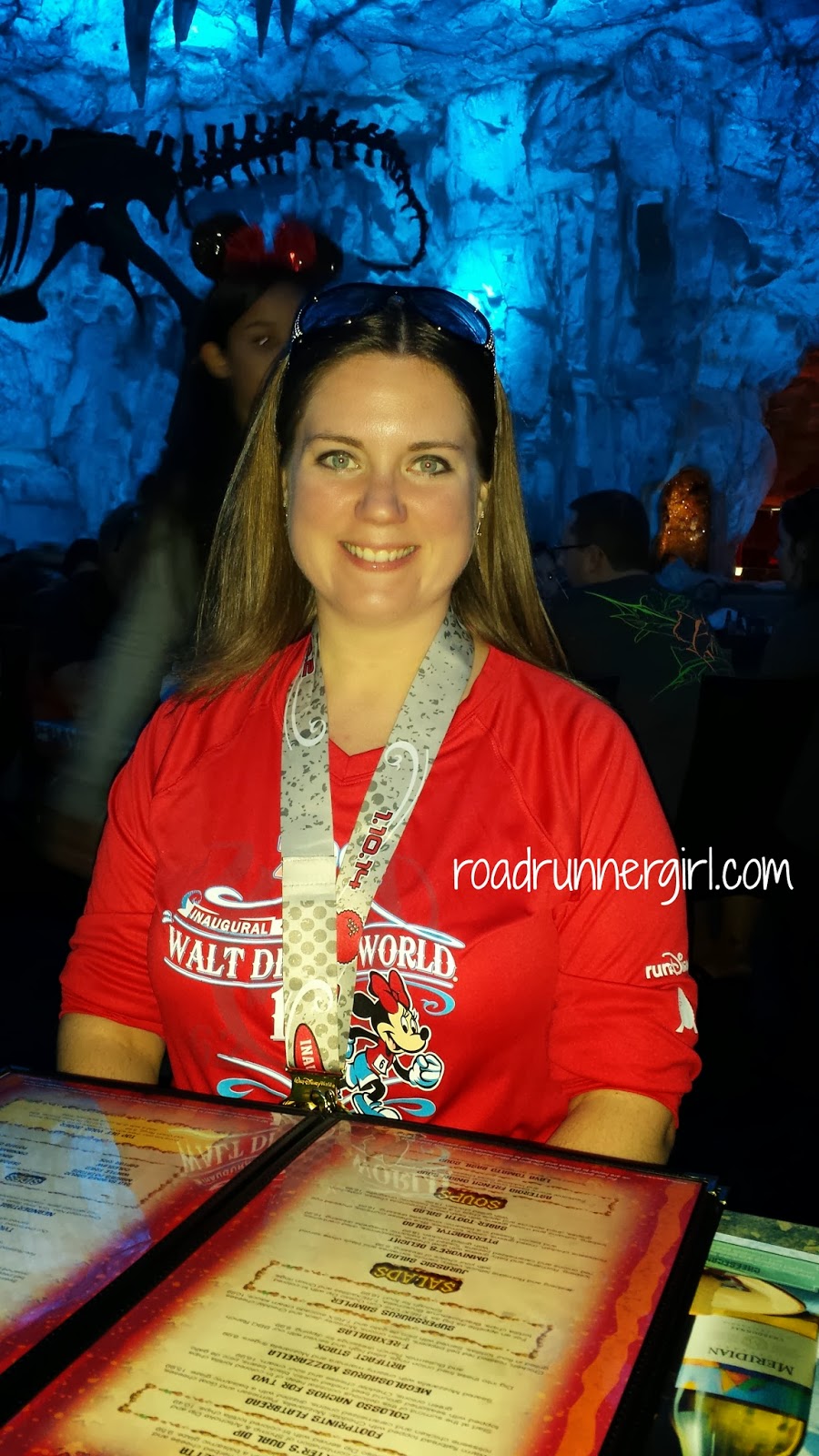 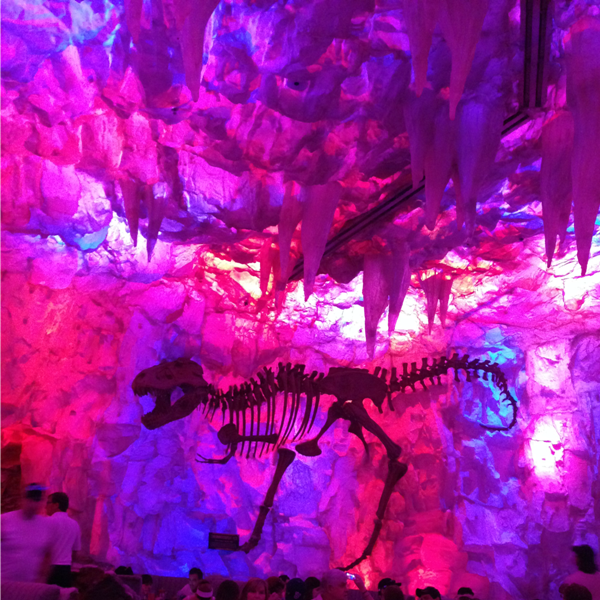 After eating we shopped a little more and then headed back to the resort. Frank from The Fat Runner and I had been texting all weekend wanting to meet up. He was staying at the resort next to mine so he walked over once we got back from Downtown Disney! It was so great getting to meet him in person! He was running the marathon on Sunday....his first! I couldn't wait to track him! He has an amazing running journey and I encourage you to follow him! You can read all about his marathon experience HERE! 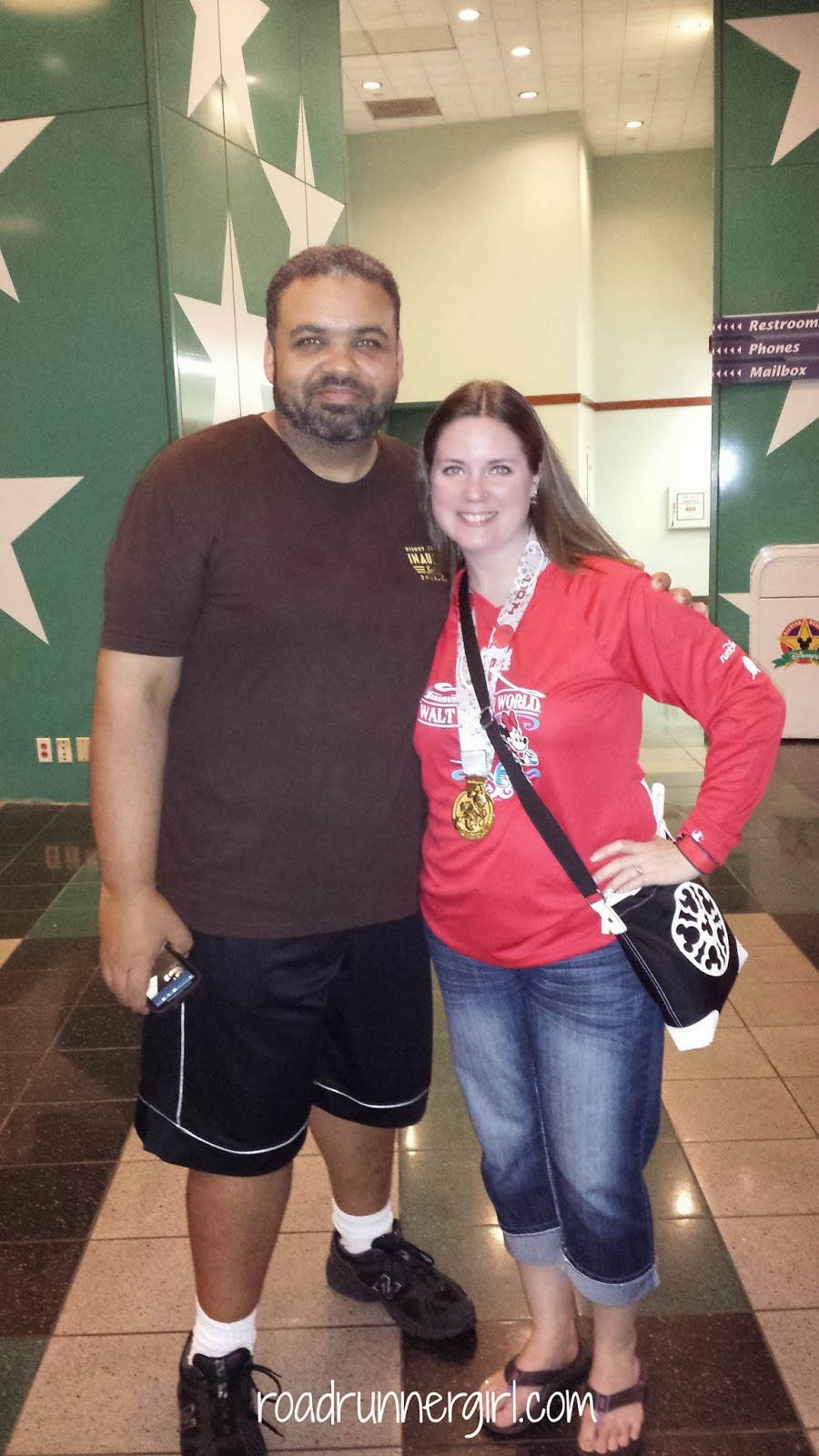 After visiting with Frank we headed to the cafeteria at the resort for some dinner. It was getting late and we had an early wake up call for the Half Marathon the next day! I had my usual pre-race dinner...pizza! Yum! 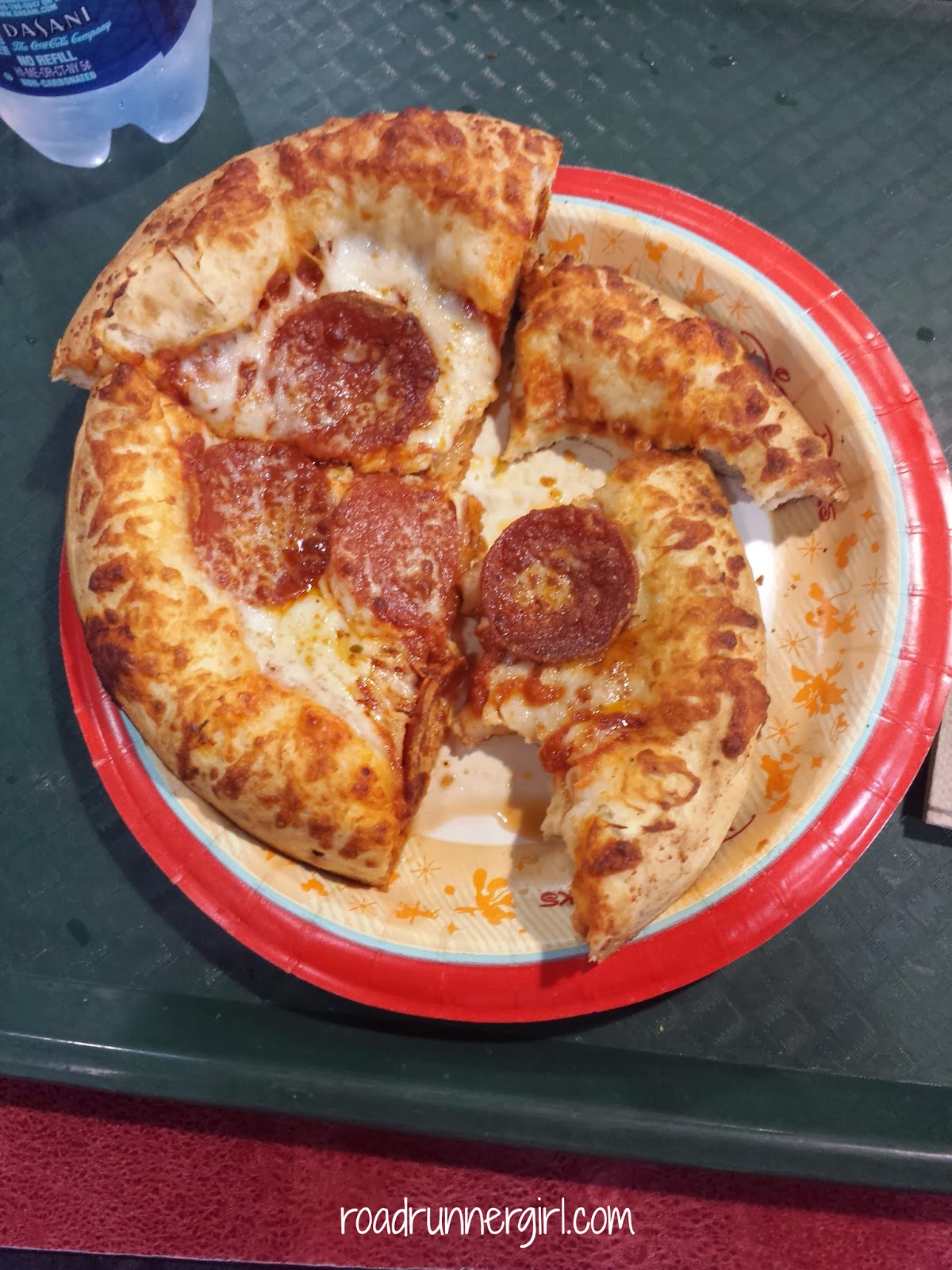 Then we headed back to our room to get things ready for the race. I was super excited about dressing up as Mike Wazowski the next day! 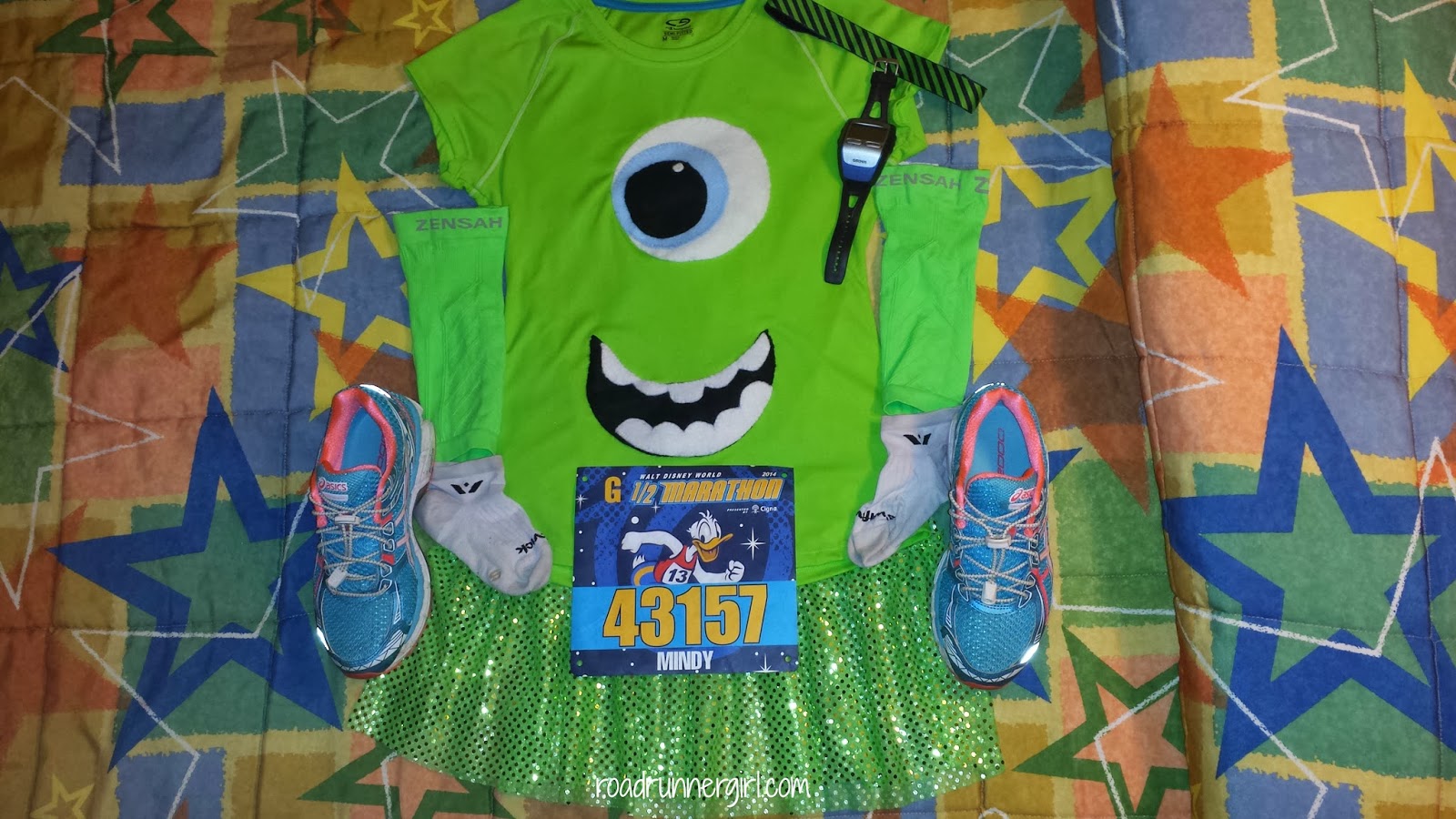 Stay tuned for my recap of the Walt Disney World Half Marathon!

QOTD: What is your favorite store or restaurant in Downtown Disney?