I know what you are thinking! A Turkey Trot in October? Seems early! Well...I run this race every year because of that fact. Because every registration buys a Thanksgiving turkey for a local family in need. So I'm ok with it being early!

This race is also one that the cub scouts participate in. So we always do it as a family! This year was no exception! 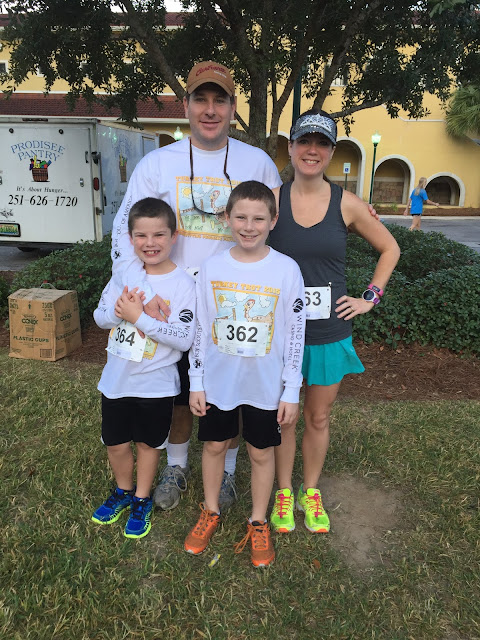 Funny story....my husband was in charge of registering all of us for the race since he is a cub scout den leader. Well...he got us all registered but our shirt sizes were a different story. Sawyer's shirt was a little snug but it worked. MY shirt however....was super big! He ordered me a size LARGE!!! Lol! I'm not sure what he was thinking! And now I can't stop picking on him about it! 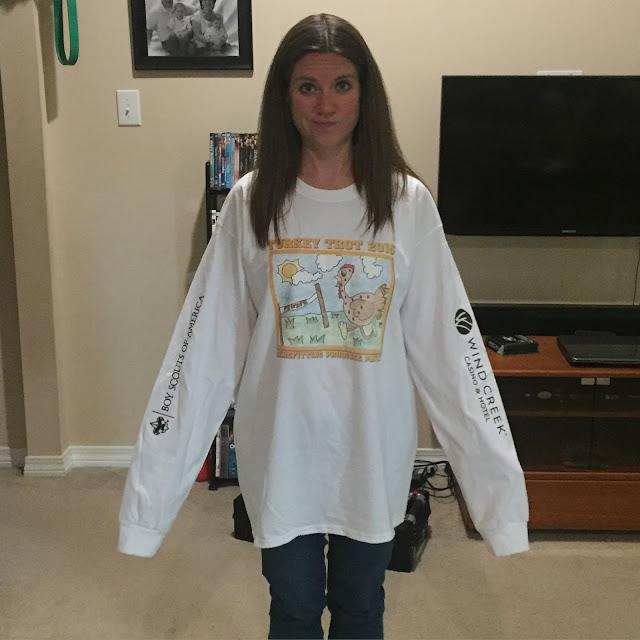 This race is always very family oriented. They had several vendors out there with games for the kids. And Piggly Wiggly even had Mr. Pig there! 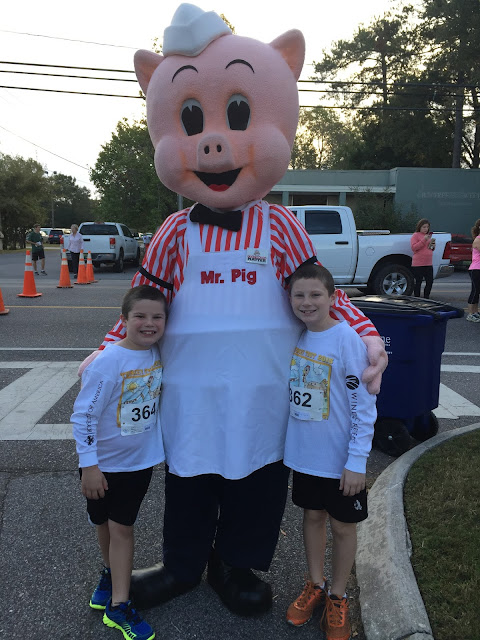 Donna rode to the race with us. My boys kept her quite entertained! We both bought the same skirt last weekend at the half marathon packet pickup so we decided to wear it to this race! Don't we look cute?!! 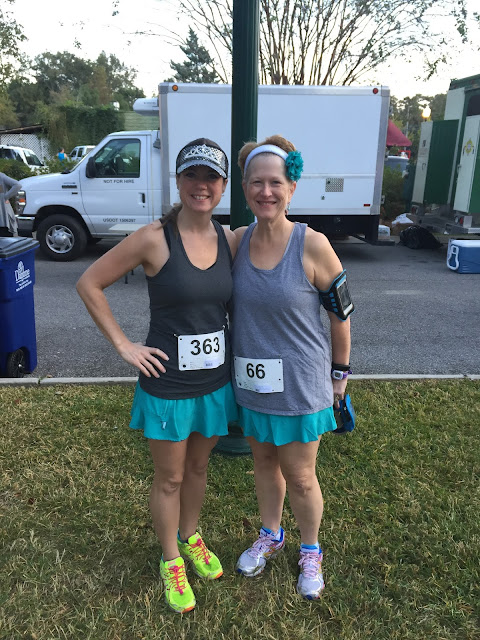 My goal for this race was to try and PR my 5K time. I also hoped I would place like I did last year. Because this race isn't bib timed I lined up as close as I could to the start line but not too close so I wouldn't get trampled. I heard two runners in front of me talking about keeping an 8 minute pace so I knew I was lined up in the correct spot.

As I was waiting for the start I realized I hadn't turned on my Garmin. It is usually super fast about finding the satellites but that morning it was having a hard time. The gun went off before my Garmin was ready. But what can you do? I started running hoping it would catch up. And I had RunKeeper going on my phone so I knew I had a backup.

I knew immediately when I started running that I was going to have a good run. My legs were feeling strong. I had that floating on air feeling. It was making me very happy! When I ran mile 1 in the 7's I was super shocked! Had I really just run that fast? And could I keep that pace for two more miles? I didn't know but I was going to try. I was in a groove so there was no slowing down.

There were several hilly parts of the course but I got through them fine. The course was different than last year but still downtown in one of my favorite areas to run.

Before I knew it I had made it halfway and to the turn around point. Headed back I saw several of my Sole2Soul Sisters and that was fun!

Mile 2 came and then it wasn't long and I could see the finish line. But since it was a straight shot there I knew it wasn't super close. I was still running fast and in the 7's. But I was getting tired. I wouldn't let myself slow down. I was too close.

Near the finish line I saw one of my favorite photographers Tim! He snapped pictures of me and said, "Fast!" 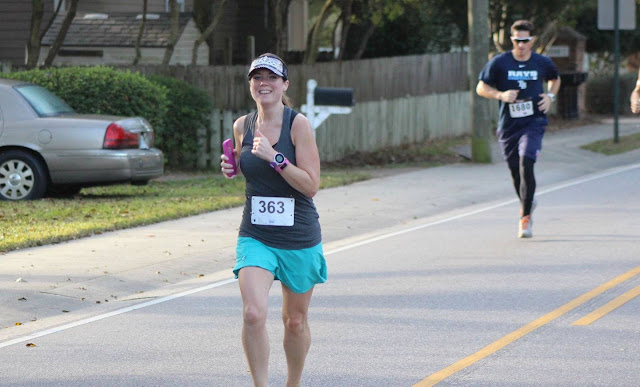 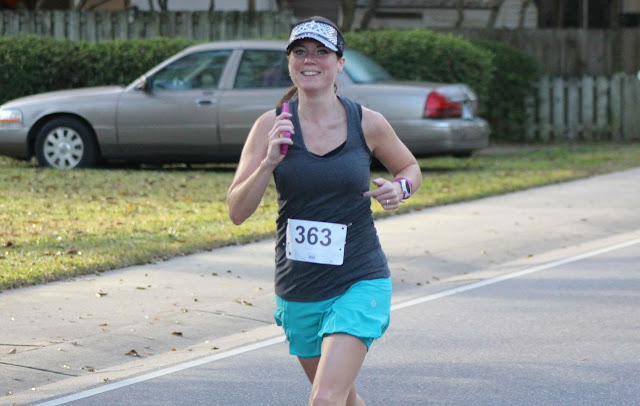 That gave me the extra push I needed! I sprinted to the finish line! Right before crossing I heard and saw Sawyer cheering for me! Love my sweet boy!!! :-)

The only issue I had was my Garmin said the mileage was 3.00. Now I'm not sure if that was because the satellites didn't come on until after I started. Or if the course was a little short. Either way...I still would have PRed regardless! 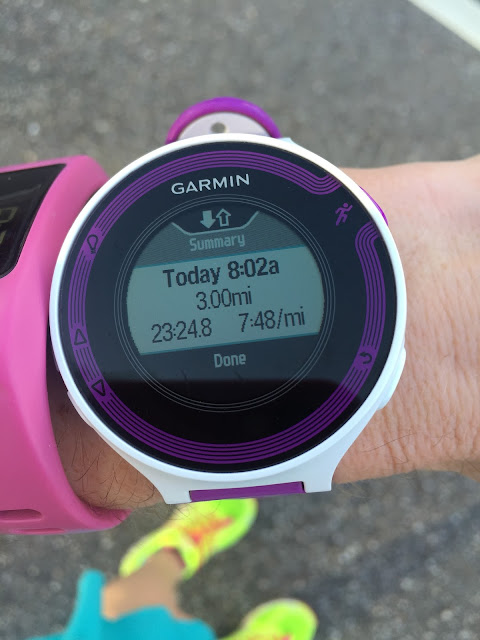 After crossing I headed toward Sawyer and also found Hayden and Andy. We walked around a bit and the boys played some games. Then we found Donna. We still had a few minutes until the fun run would start.

Another awesome picture by Tim! 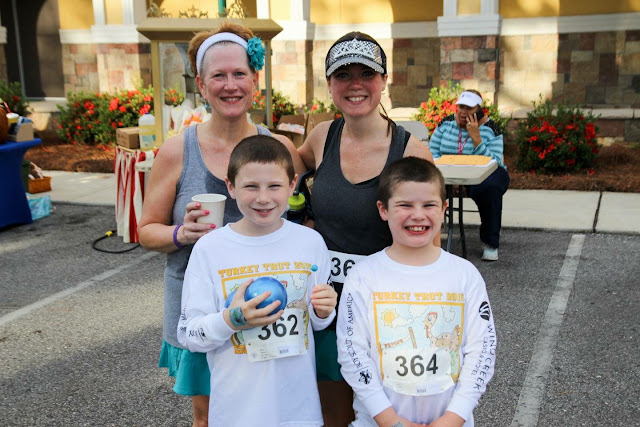 Andy was supposed to do the fun run with us. But he could barely walk. He got hit in the leg by a softball last week at his softball game and he was in pain. So he decided to not risk it. I knew Hayden wanted to run since he has been doing the running club at school. But Sawyer wanted to run and walk. Sweet Donna offered to run/walk with Sawyer so I could stay with Hayden in case he wanted to run.

We lined up to start and took off! Hayden did so awesome during the fun run! It was a mile long. We walked a few times and ran a few times. He loved it! He finished in about 14 minutes. Then we waited to see Sawyer and Donna come in. They weren't that far behind us. And as soon as Sawyer saw the finish line he took off!!!!! 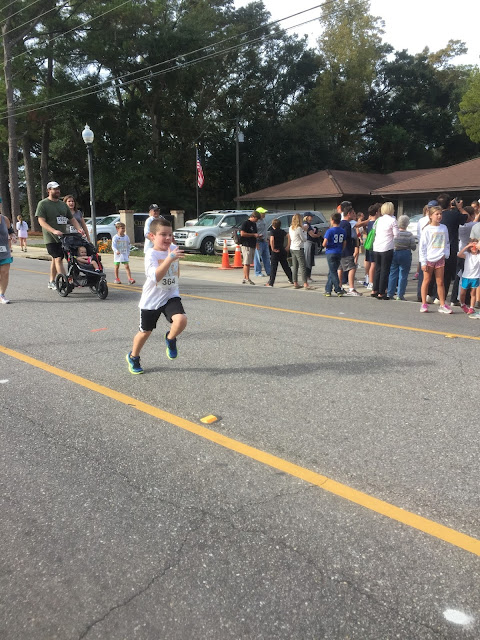 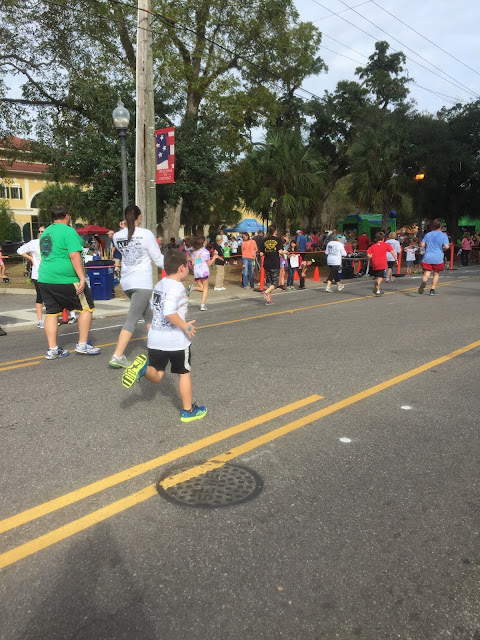 After the fun run it was time for the awards. I had no clue if I'd placed or not because I couldn't find the posted race times. So when they called my name for 2nd place in my age group I was so thrilled!!!

I received a medal and a water bottle! 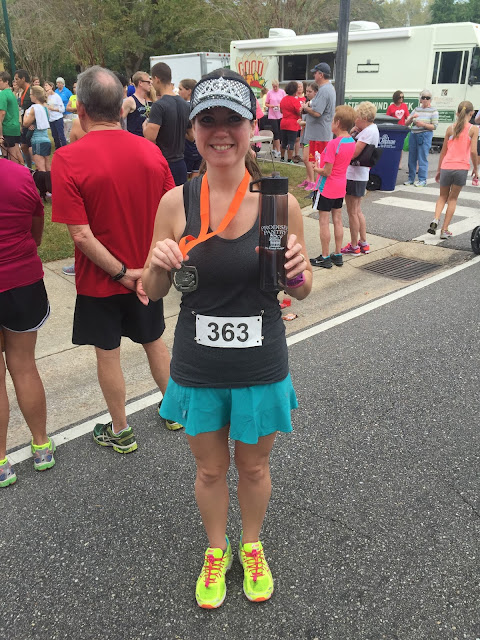 I was so happy! It was another great time at the Turkey Trot! I remember how last year at this race my calf strain had just started. I was so thankful to be running injury free this year!

Of course I'll be back to run this one again next year!!!

QOTD: Have you ever run a race where your Garmin was off? Or a course that was too short?