5 Miles With the Girls!

It's been forever since I've run with the girls! It was great seeing all of them again! It was pretty humid and foggy this morning...made it a little hard to breathe today. But I accomplished the 5 I set out to do! It wasn't my best run but it's done! The new shoes seemed better today.  I loosened the laces and that helped my tingly feet.  My left foot felt like it may start tingling but it didn't.  My right hip is, however, still hurting.  Remember when I had this pain a few weeks ago?  I continued to run and it seemed like it was getting a little better.  Then I took the two weeks off after the half.  I could barely feel any pain during those two weeks of no running.  But after Tuesday nights run, the pain began again.  I am hoping I can just run through it like last time and it will just get better.  I'm crossing my fingers because training starts again in June for a half in September and then Disney Marathon training starts after that.  So I need my body to be pain free!  Lots of rolling is going on in my house right now!!!  :-)  After this morning's run, we wrote on the walls of Paige's house that is being built...we wrote several bible verses blessing her and her house! So excited for my friend!


And here is a picture Paige took of me...and my "famous pose" as Paige called it lol! 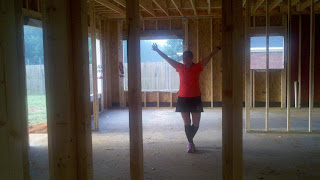