So choosing to run at 8AM in this heat was not a great idea. It was way too hot! I'm going to definitely run earlier in the mornings this summer. On the positive side, I saw a cute little bunny rabbit on my run today!  I think I scared him though with my super fastness (he he) because he hopped away pretty fast.  Wish I would have had my camera.  I also ran a new route today....with hills at the end. It was great running a new route but with the heat and then hills on top of that...it was super tough. By mile 4 I was completely spent and had to push myself mentally for the last mile. But I did it, it's done, and it was the first day of the Runner's World Run Streak where I will be running at least 1 mile every day from now until the fourth of July. I hope I can keep the streak going!


Here's proof of how hot it was this morning! 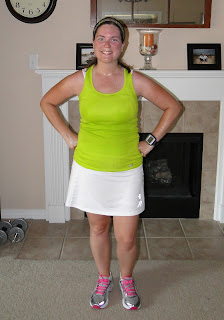 I came in from my run so sweaty that it looked like I had just gotten out of the shower!  Yuck!  I also think I got a little too hot today.  I came in exhausted and immediately grabbed a towel so I could lay down on the floor under the fan.  I usually don't get that hot...but then again in the summertime I usually run before the sun comes up.  I was just trying to sleep in today...but hey sleep is overrated right?

Happy Memorial Day everyone! I am so thankful for the men and women who sacrificed so we can have freedom!