Be sure to read my post about the expo!

I ended up sleeping really well! I wasn't nervous at all for this race. It's funny but I don't really get nervous for a half marathon anymore. I guess because I KNOW I can do it. With a full marathon there's always a little doubt on whether I can do it and it makes me pretty nervous. So when my alarm went off I was rested and ready to go!

I did my usual pre-race routine. I got dressed, stretched, went to the bathroom (hey you gotta do this before you run lol), took some pictures, and fueled. It's all about the outfit, right??!! I was super excited to wear my new shirt from Claim Your Journey! Perfect for a race in New Orleans! 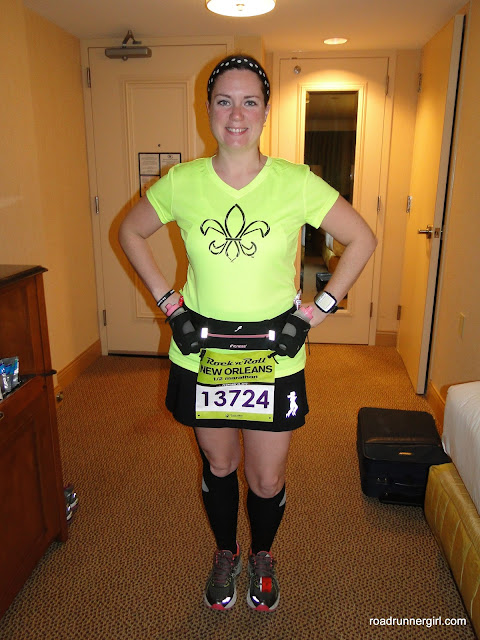 I fueled with a Designer Whey protein bar. So good! I had a banana that I planned on eating in the corral about 15 minutes before the start. 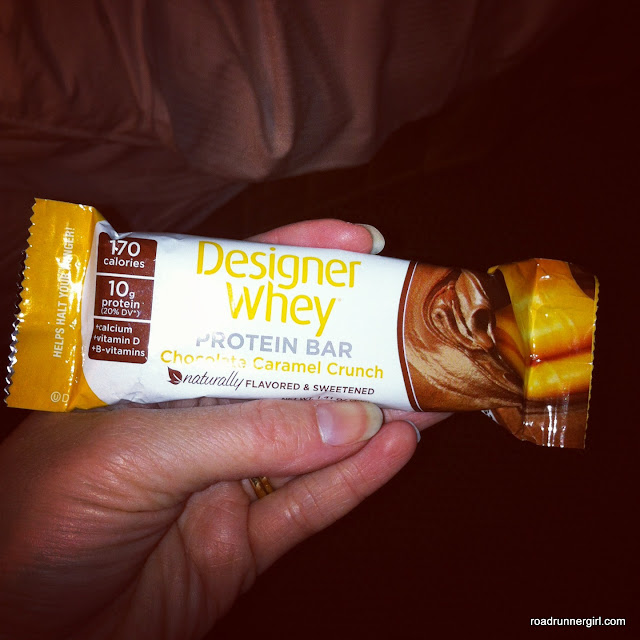 Once Jackie and I were ready we headed to the hotel lobby to meet Kimberly and Jeffrey. We took a few photos in the lobby. 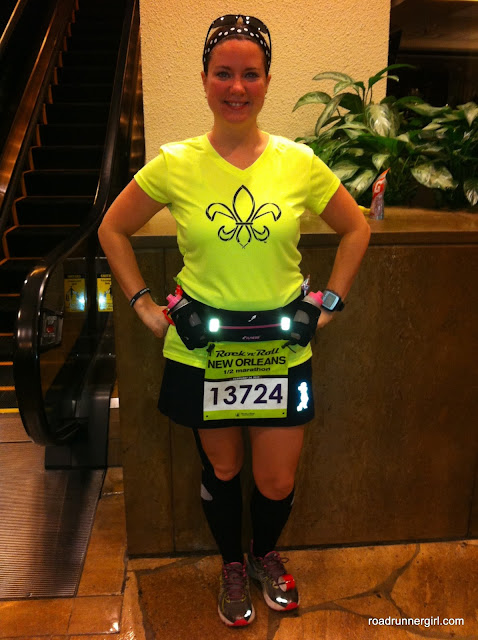 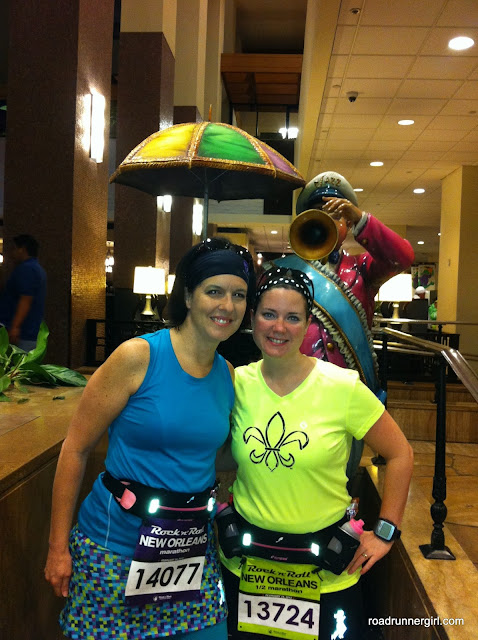 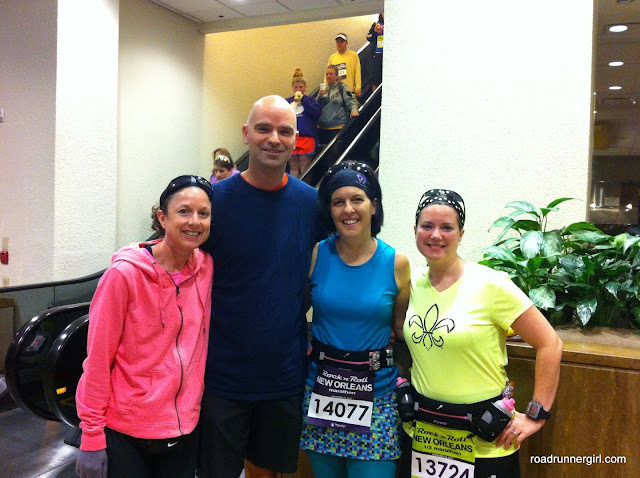 As we were waiting in the lobby trying to stay out of the wind and cold as long as possible, I happen to look to my right and saw Shannon from Flamingoz Girls Run! I first met Shannon when I ran the Woman's Half in Baton Rouge. She was running her first full marathon in New Orleans and she did awesome!!! 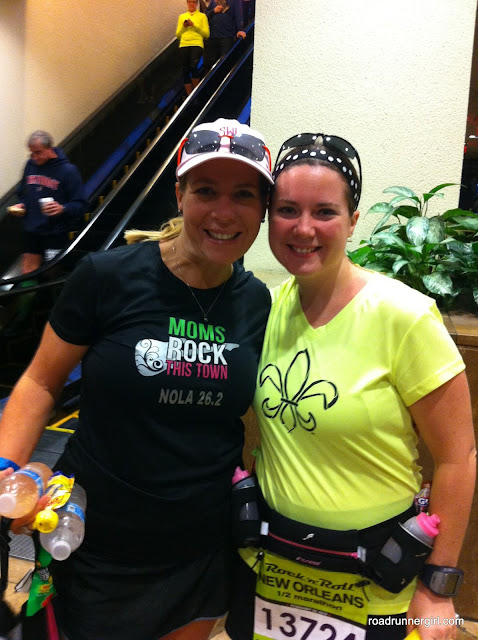 Finally it was time to head out to the corrals. We walked outside and it was so windy! The temps were in the 50's but it felt much colder with the wind. I knew it would be fine once we started running. I was just thankful that the prediction of rain earlier in the week had decreased for that morning. I ended up running under a sunny sky!

Here's Jackie, me, and Kimberly in the corral waiting to start! Can you tell we are cold?! 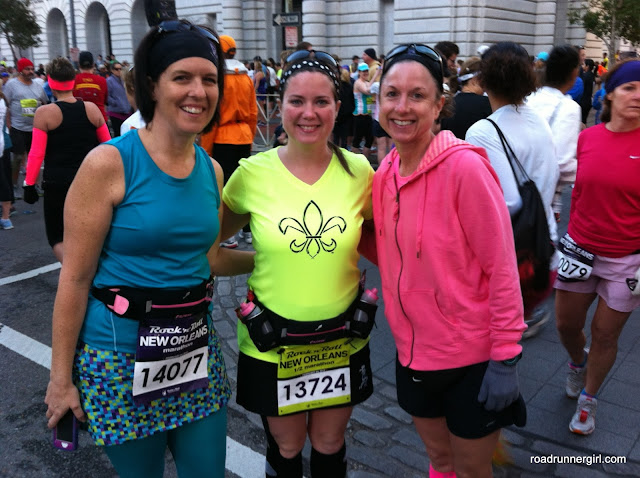 As we were standing there we happened to look down at another runner's shoes (so typical of me...I always check out every runner's shoes. Do you do that?). She had wings on her shoes!!! We asked if they made her faster and she said, "Of course!" I had to have a picture...yeah I know you are surprised lol! 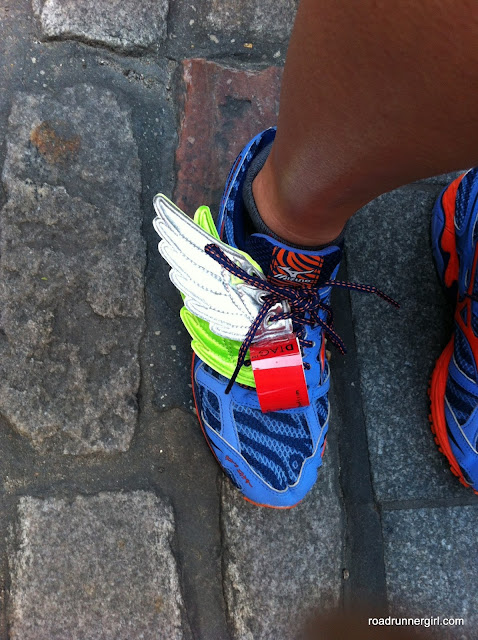 Finally we heard them countdown the first group of runners. And sing the National Anthem. It was finally time to get this party started! I was ready! I also had that feeling of not believing I was actually here again. Thoughts of last year kept rolling through my head...as this was my first full marathon last year. I was a little sad to not have Paige by my side...so I told myself I was going to run for her! She's my rock in races!

Once they get started the corrals move pretty fast! It was finally our turn! I was so excited to see that start line! 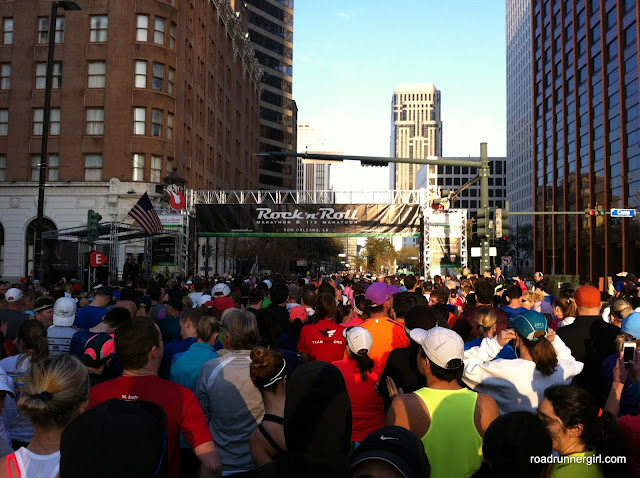 And then we were off! I knew I would get to run with Jackie and Kimberly for part of the race but they fuel and hydrate differently than me so I knew I would probably lose them at a water stop at some point. So I tried to make the most of running with someone while I had the chance. I really tried to think about my pace during this race. I didn't want to start out too fast and then lose my endurance in the end. I think I did really well with that.

The first few miles were pretty normal...I wasn't warmed up and my legs felt heavy. But running a race helps because you are excited and have the crowd to help you get through it. And around mile 2 we saw the pace car...and there came Mo Farah!!!! Yeah you know Mo...the double medal Olympic champion in London this past year! It was amazing to see him run! He looked like he was running on clouds! He was so fast! I was at mile 2 and he was already at mile 7!!! The crowd cheered loudly as he flew by us! And he ended up winning the half marathon with a time of 1:00:59...which was a course record!!! Amazing!!!

After seeing Mo I was determined to catch a glimpse of Kara Goucher and Shalane Flanagan. They were running the half too. I focused on the other side of the street trying to see them. But I never did. I actually turned my head to talk to Jackie and I think that's when I missed them. :-( It's funny because you can see how focused I was on trying to see them in my race photos!!! 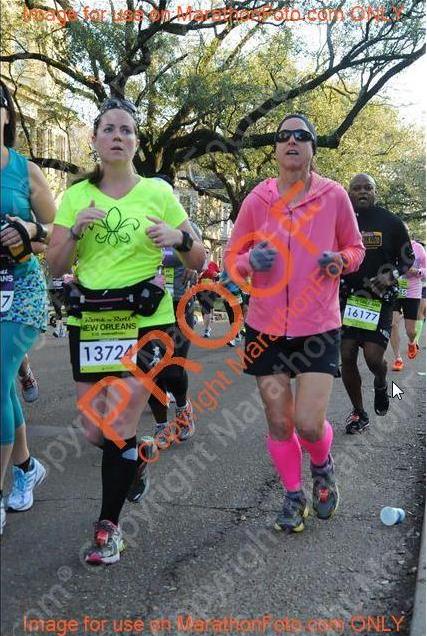 After realizing I missed them I focused on my own race. Around mile 5.5 I broke apart from Jackie and Kimberly. We hadn't stopped for water yet and my bottles were empty so I needed to refill them. I told them to go ahead and knew I would be on my own for the rest of the race.

At mile 6.5 I had to pee so bad! I usually don't have to stop to go to the bathroom in a half marathon but I just couldn't hold it any longer. I spotted some porta potties across the street with no line so I headed over there. I was in and out quick but would learn later that it had cost me.

The fun thing about Rock 'n' Roll races...the bands!!! I love hearing all the bands that play while we are running by! 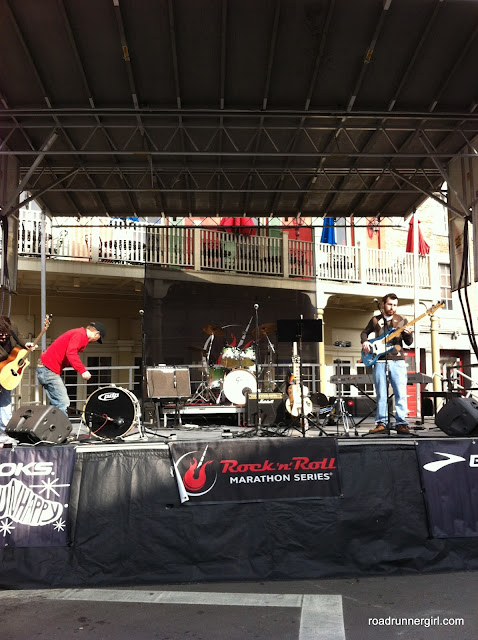 I was feeling great this race! The miles were flying by! Around mile 8.5 there was a fuel stop...I grabbed some GU just in case I needed it (which I didn't...the two Huma Gels I took were just enough) and heard someone call my name. I looked behind me and saw some of my Sole2Soul Sisters that were running the full! It was so great to see them and they were running strong! I ran with them until I saw the big Brooks inflatable guy with the guitar. I knew I had to stop and take a picture...it was tradition lol! When I stopped a spectator asked me what we were running for! I told her...and then asked her to take a picture of me! Thanks random stranger lol!!! 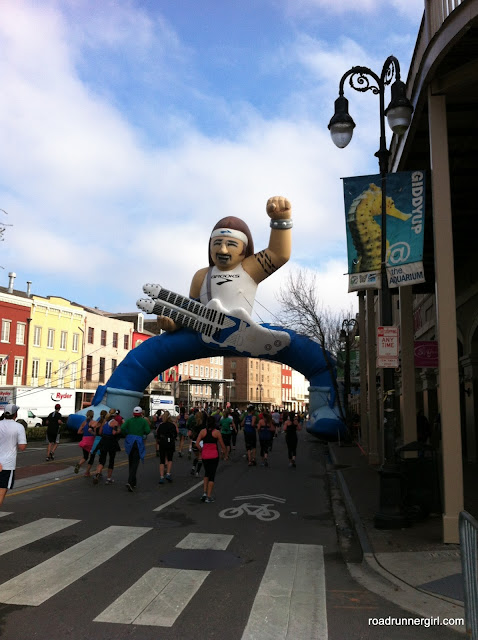 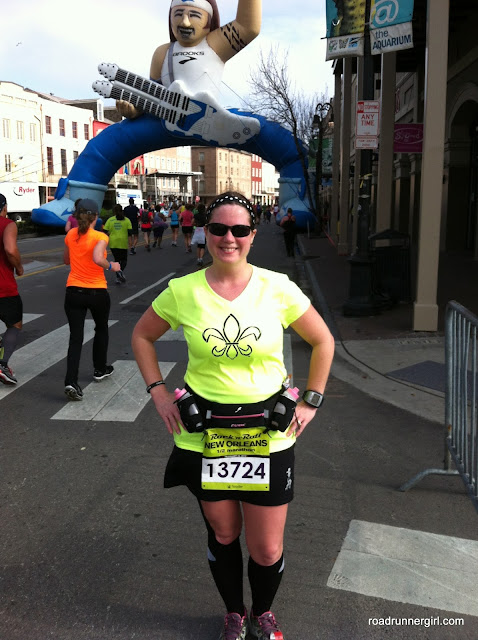 I knew after running under this guy that my favorite part of the race was coming. We got to run through the French Quarter, past Cafe Du Monde, and past Jackson Square! 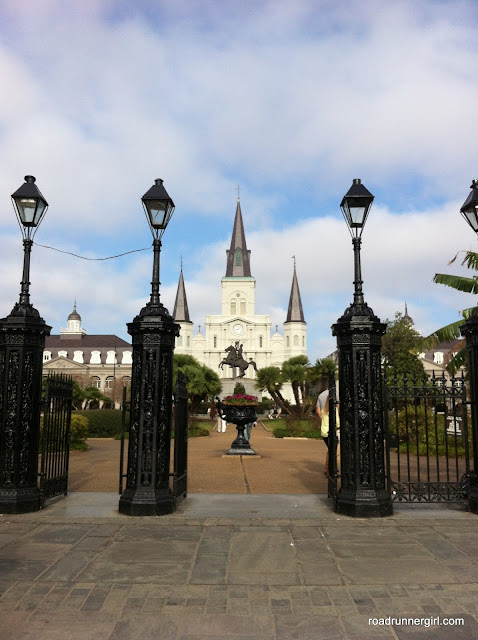 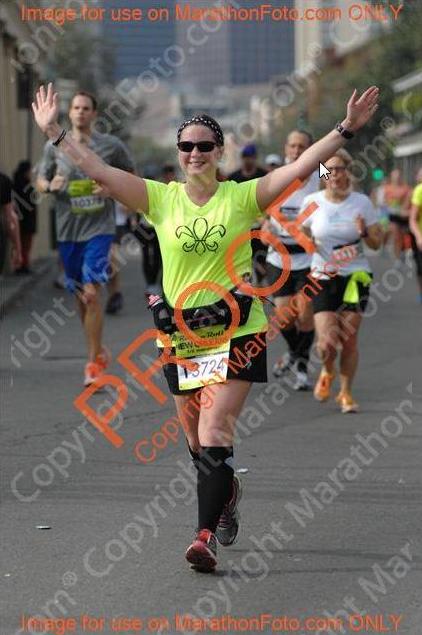 The last two miles of the race were so mental for me! My mind kept telling me to stop and walk...but I wouldn't let myself. And I am so proud I won that battle and didn't walk at all!!!!

Around mile 12.5 we reached the point where the marathon course turned left and the half course turned right. I remember this point last year. I was soooo happy to be going right this year lol!!! After we turned I knew the finish line was close! I picked up my pace and started sprinting...and I was sooo glad I still had energy to do this! 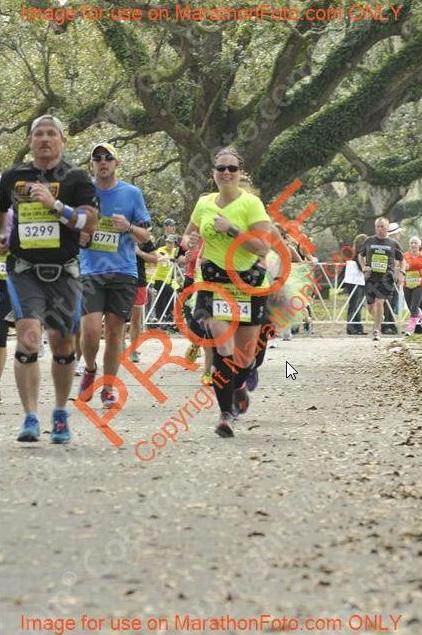 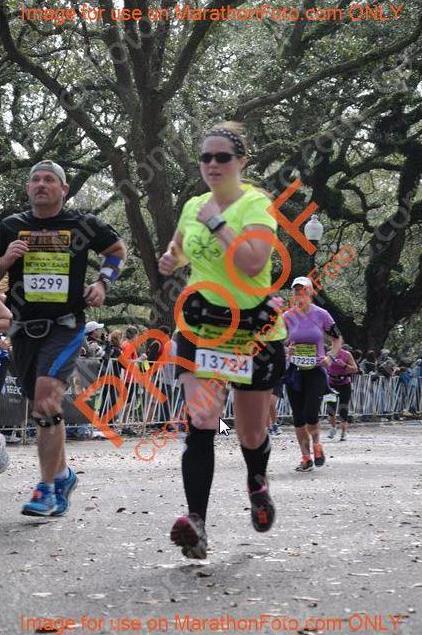 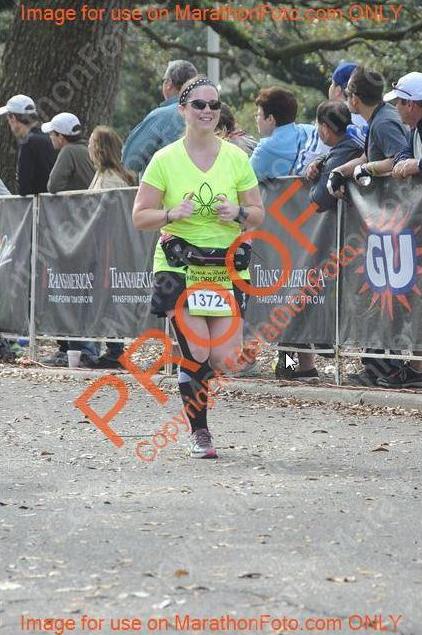 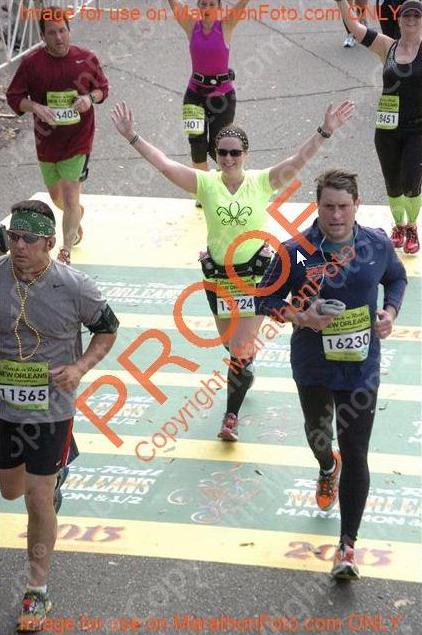 My secret goal was to come in under 2:30. But that bathroom stop didn't allow that...my official time was 2:30:31!!! If only I hadn't stopped!!! But I was still happy because I had a great race where I felt awesome the entire time! 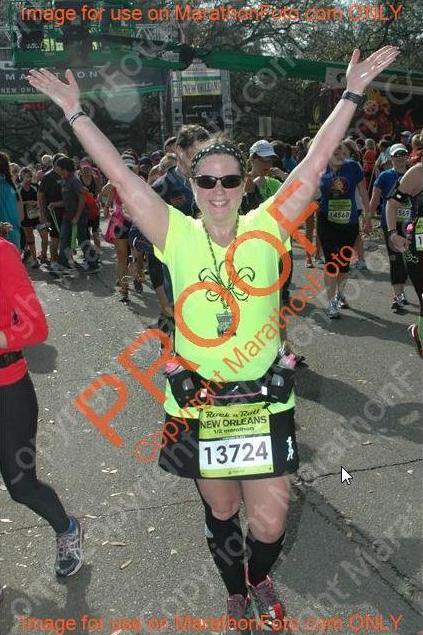 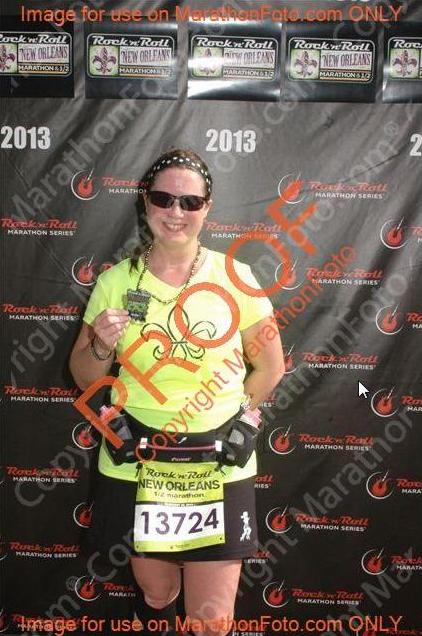 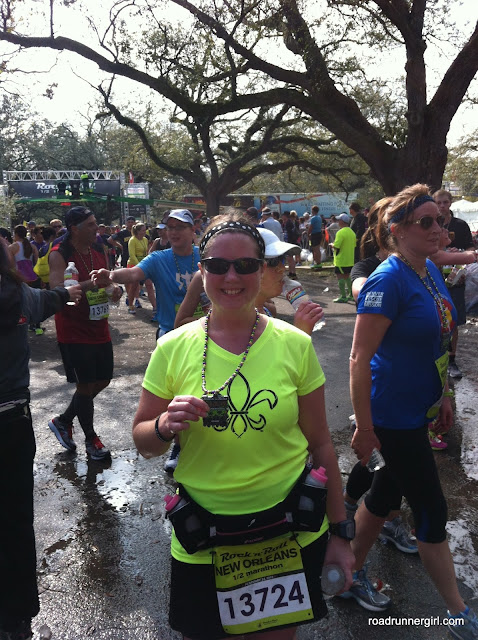 And the bling is always fun at this race! I LOVE the Mardi Gras beads instead of ribbon!!! 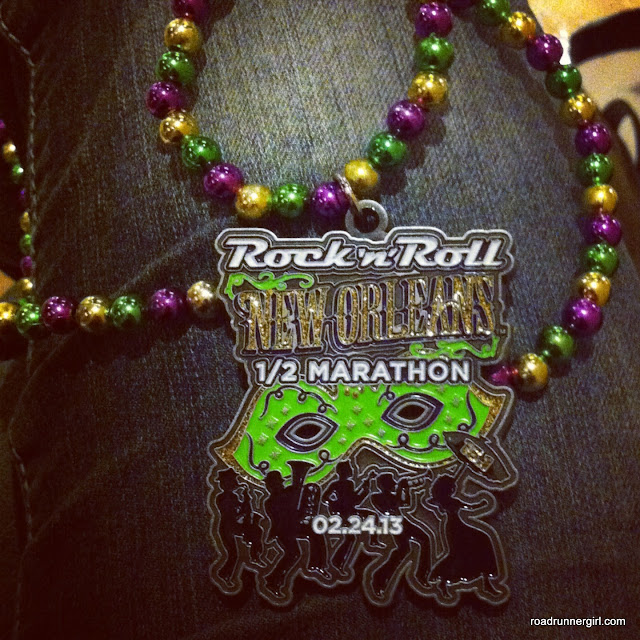 Overall this race was awesome! I still hate that Paige wasn't there to run with me but I still managed to have a great run and great time!

After the race I headed back to the hotel to shower and wait for Jackie, Kimberly, and Jeffrey to finish the marathon. Once they finished and showered we headed out for something to eat. We were all starving!!! And because I was so hungry I totally forgot to take a picture of my food!!! But I'll tell you what I had...a yummy steak, salad, and loaded baked potato!!! Sooo good after 13.1 miles!!!

What's next? Seaside Half Marathon next weekend!!!! I can't wait!!!

QOTD: Do you ever play the mental game during a race? How do you overcome it?