Well this month Jill and Jen hosted their first virtual race for 13 in 2013 called Tackle the Miles and it just happened to coincide again with 5 by the 5th! Score!!!

And then a few hours before the Super Bowl on Sunday I see this post from Pavement Runner. You made your wager on who would win...the Ravens or 49ers. If your team lost then you had to run the point difference in miles. You also had to post a picture on Instagram or Twitter with the hashtag #milesofshame. Well...I didn't really care who won the Super Bowl. But I thought this would be a fun challenge! We were going to a friend's house to watch it and they were 49ers fans. So that's the team I chose. And yes...they lost. So yesterday's run was also my 3 #milesofshame!

Triple Duty on this run!!! 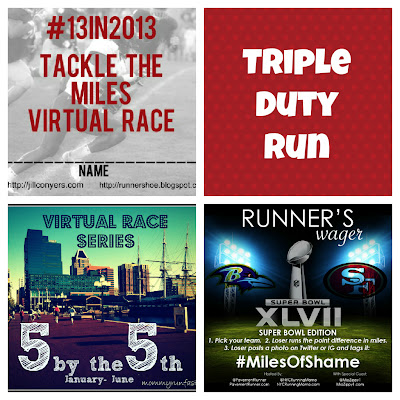 Short runs are not my favorite so I wasn't too excited about getting out there. I also decided to run spur of the moment. I normally run on Tuesdays. I'm so glad I ran Monday because Tuesday ended up being a nasty rainy day. But spur of the moment meant a solo run...yuck!

The weather was perfect running weather...it was 49 degrees when I headed out! The first mile was tough and I wanted to quit like always. But I kept going. Along came mile two...and I started feeling pretty good! My breathing was just right, the legs felt great, and I was running a little faster than normal. Around mile 2.5 I saw the funniest thing....someone's yard had been flamingoed (is that even a word?) for their birthday! I decided to snap a quick picture. I am going to participate in One Tough Mother Runner's #runnerphotos Instagram photo-a-day challenge. I just saw it on Sunday so I will be playing catch up the next few days. But it looks like fun! Want to join me? 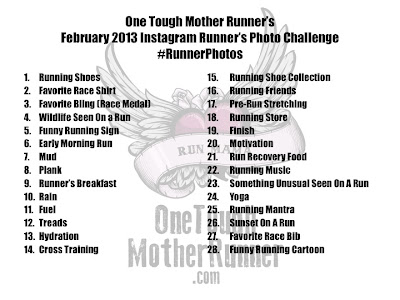 Monday's prompt was "wildlife seen on a run." So I thought the flamingos would count...right??? 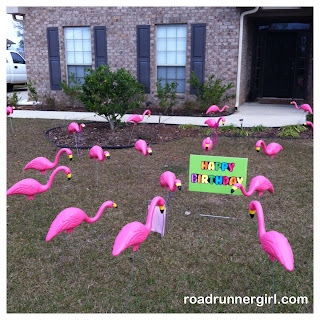 After the picture I continued the run. And finally I made it to mile 3.1! I looked down at my watch and was amazed to see that my average pace was 9:52! I haven't held that pace in awhile! Yay! So even though this was a dreaded short run...it actually turned out to be a great run! 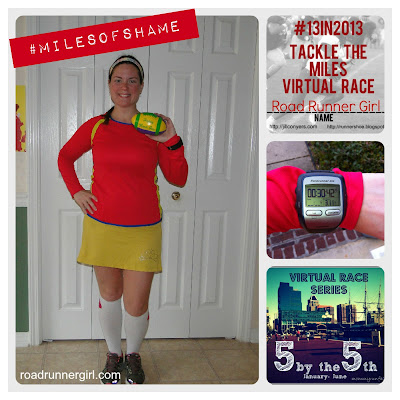 QOTD: Have you ever participated in a virtual race?