Family Camping With the Cub Scouts...Day and Night 2!

If you haven't already, make sure to read about our first night camping!

As I mentioned yesterday, I didn't sleep well that first night. But I did enjoy hearing all the night sounds. And my favorite part was waking up next to all my family! I loved seeing my boys' sleepy eyed faces when they woke up! They did some posing for the camera for me! 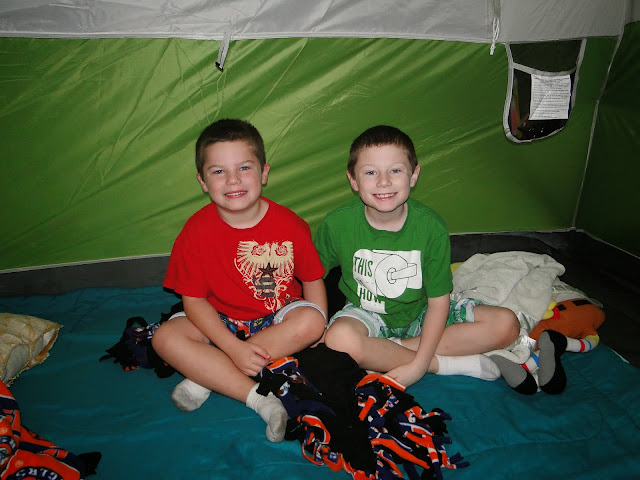 Then they wanted to pretend like they were still sleeping for the picture. Silly boys...like they would be grinning like that if they were really asleep!!! ;-) 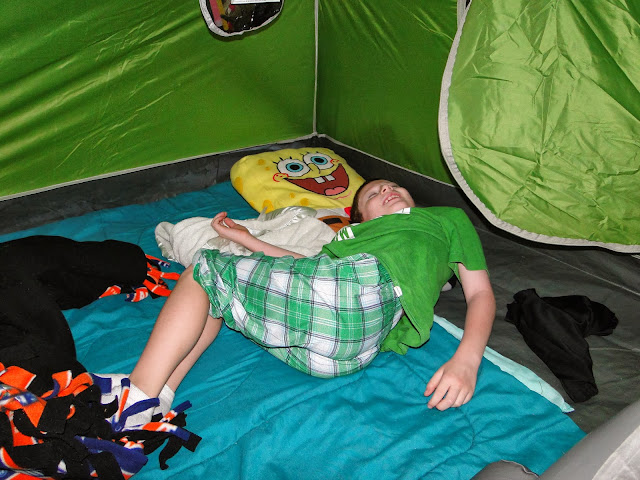 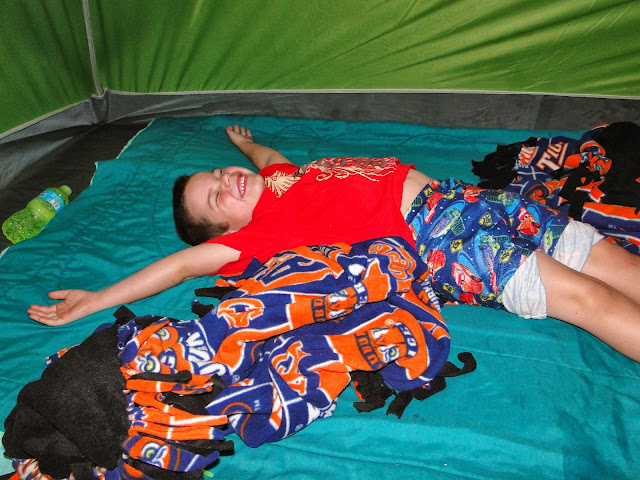 And no photo session is complete without a goofy one! 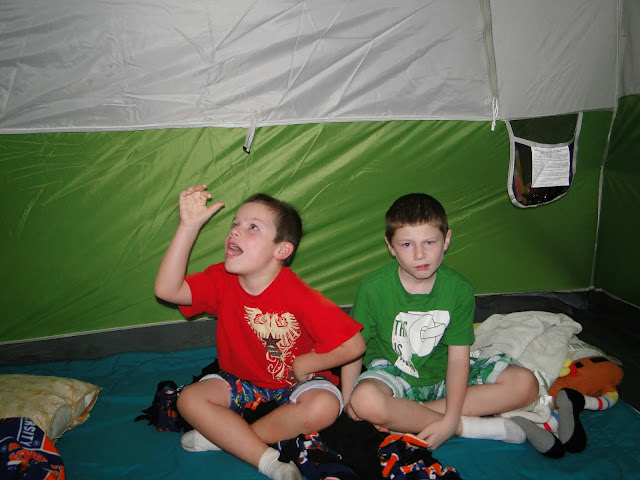 I finally got them to get dressed and step out of the tent! We heard the bell ring and that meant it was time for breakfast! Each group of cub scouts took a turn preparing and serving the meals. Luckily breakfast wasn't our turn so we didn't have to wake up super early. We enjoyed a super yummy breakfast of pancakes and sausage!

Then it was time for the Rain Gutter Regatta Boat Race! Hayden was excited to race his boat! Sawyer was nervous since it was his first time. Our pack had a little over 50 boats that raced that day! Wow! 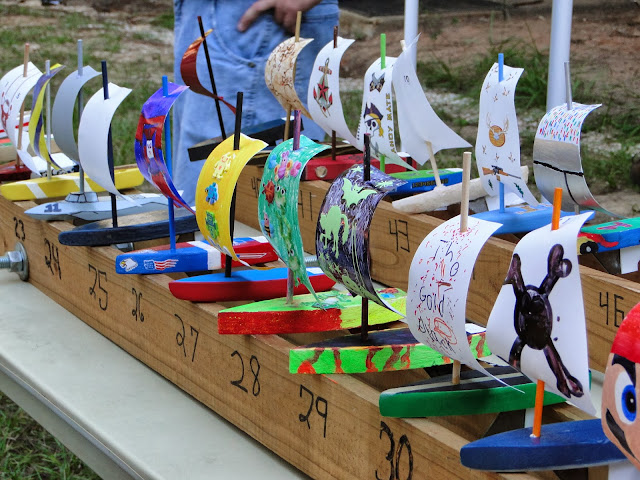 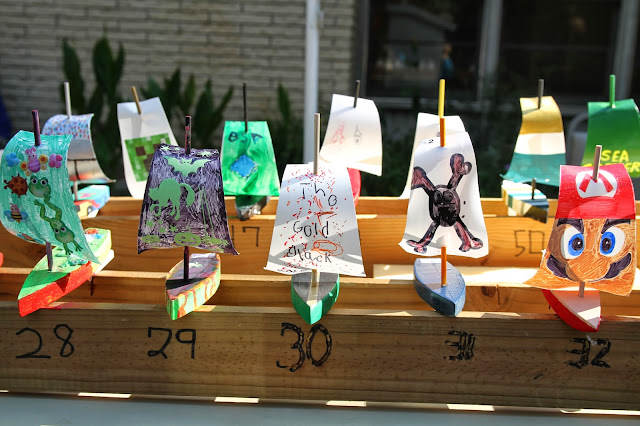 Each cub scout got to race their boat at least two times. If they won their heat then they got to race more.

Sawyer's den, the Tiger Cubs, started the race first. He was so nervous! He got up there and did great...until he saw that the other boat beat his! Then the tears started flowing! He stopped blowing on his boat and gave up. But the whole pack started cheering him on and he eventually finished his race! What a hard lesson! 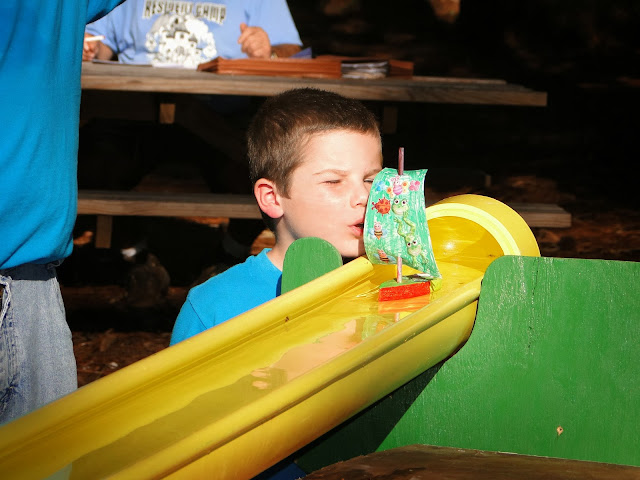 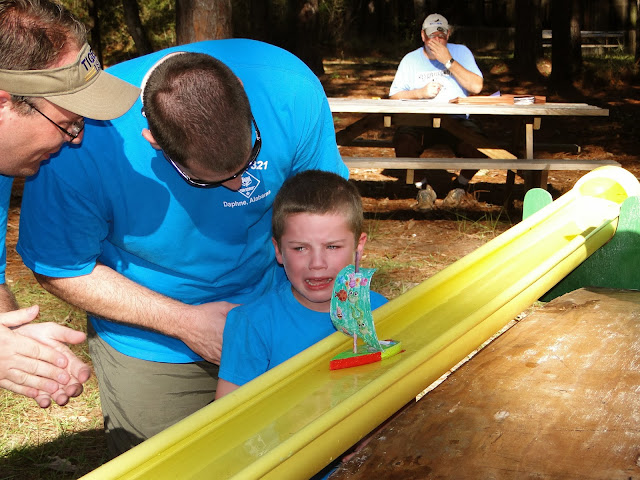 The next time Sawyer raced he did great! He didn't win but he also didn't cry! I talked to him before his second turn about how I run my races. I never win but I always finish. I was proud of him for finishing this time without tears!

Hayden did great with his turn! He didn't win any of his heats but he was ok with that. He still had a good time racing! 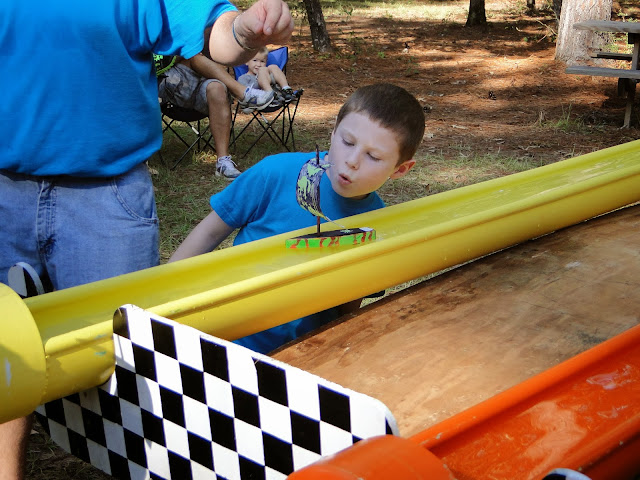 After the races was the award ceremony. There were trophies for the winners of the race. There were also ribbons for different categories for the boats. Both of my boys won a ribbon! They were sooo excited!!! 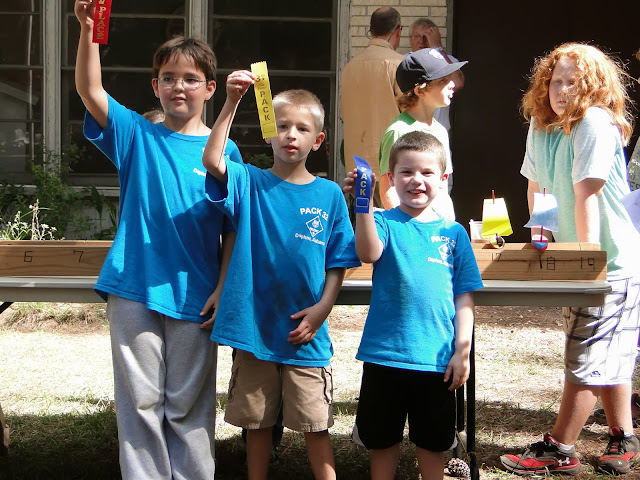 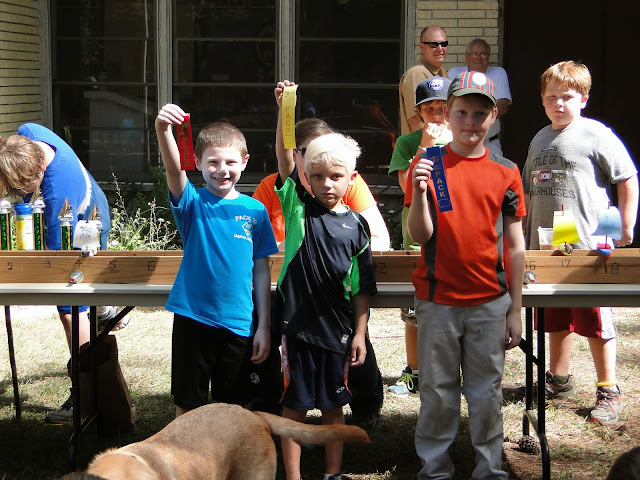 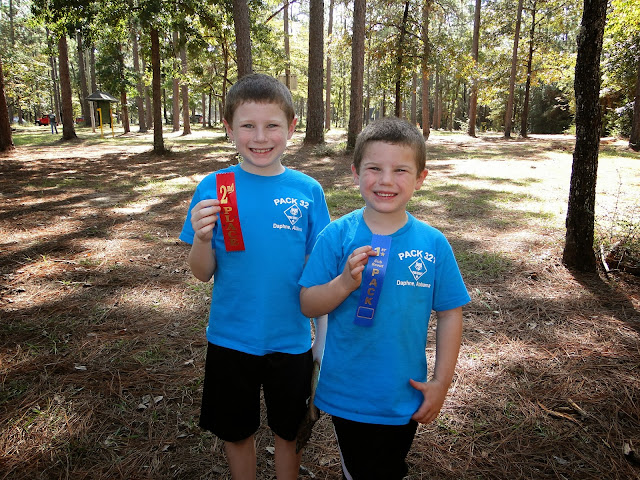 After the awards it was time for lunch. Sawyer's den had to prepare and serve. It was great to see my sweet baby up there serving lunch to everyone! And he loved doing it! 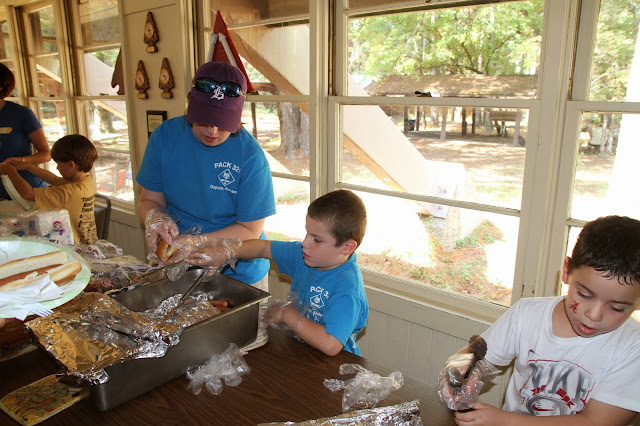 After lunch we had free time until dinner. Andy took his den (he is the Bear Cub Den Leader....Hayden's den) on a hike. Sawyer decided to go back to the campsite and play with friends. And me....well I relaxed in the sunshine! I also had a pretty bad headache so I just wanted to rest some. 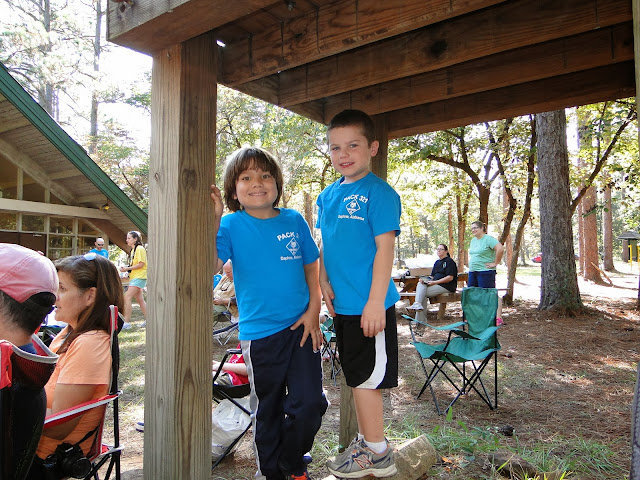 After their hike, Andy and Hayden came back to the campsite and played for awhile. They even had a friendly card game with one of the other scouts. 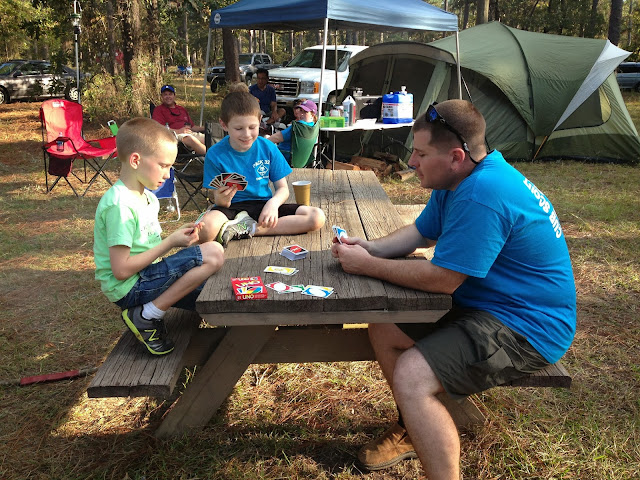 And of course I had to get in a family picture in front of the tent with our matching Scout shirts on! 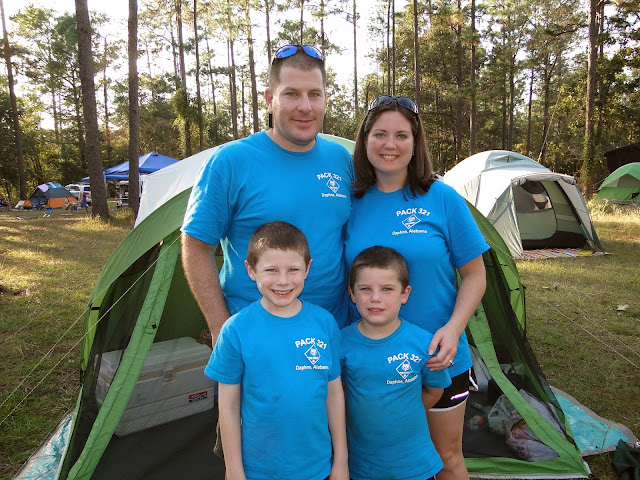 Then it was time to get the boys in their uniforms for the formal dinner. Hayden's den also prepared and served the awesome Taco dinner! 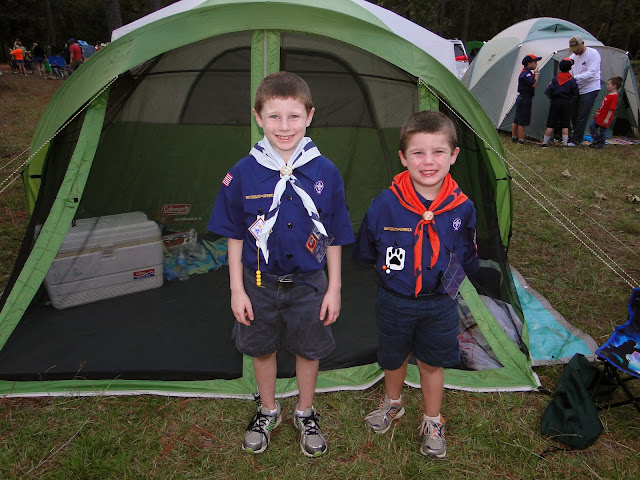 After dinner it was time for the Pack Meeting and Bonfire! Each den had to present a song, stunt, or skit. The Tiger Cubs (Sawyer's den) went first. They did a cadence that was soooo cute! They did a great job! 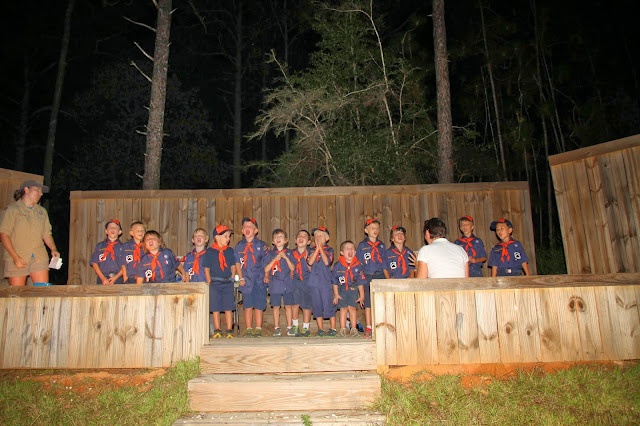 The Bear Cubs (Hayden's den) did a skit called The Invisible Bench. All the scouts were sitting on an invisible bench until the last scout said he had moved the bench over there. Then they all crashed to the ground! It was cute! 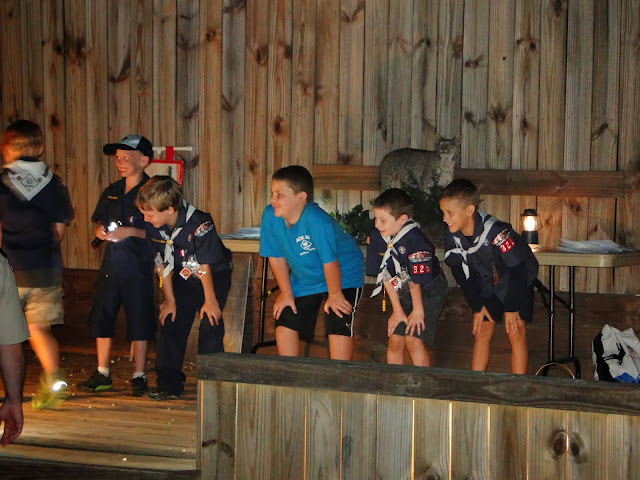 After all the dens performed and all the advancements were given out it was time for the special Bobcat Ceremony. Sawyer was earning his Bobcat Badge. He was nervous because he remembered when Hayden got his Bobcat Badge. Each scout has to become one with the Bobcat by drinking the "bobcat blood." Sawyer was super scared about this! But he drank it! :-)

The parents joined their scout on stage to present him with his Bobcat Badge. The badge had to be put on upside down. The scout is not allowed to turn the badge right side up until they do a good deed for their parents. So to make it more fun our pack has a tradition where the dad turns the scout upside down and the mom pins the badge on right side up! 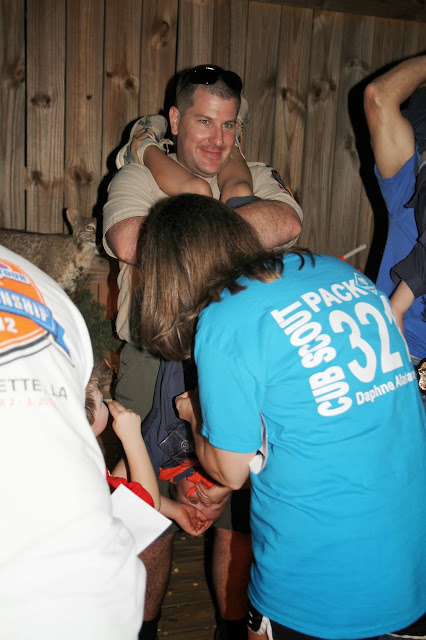 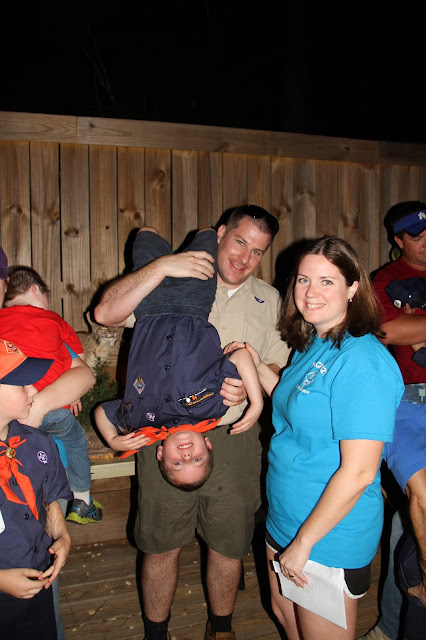 After the scouts got their Bobcat badges they were allowed to pet the Bobcat! ;-) 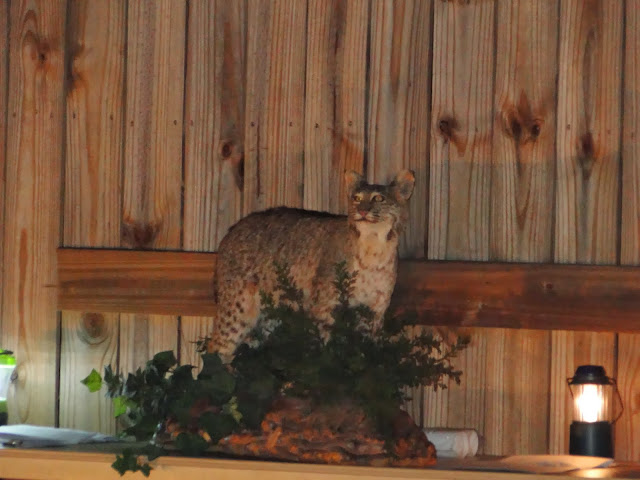 Once the ceremony was over we all headed back to the dining hall for a pack tradition...cobbler! They had cherry and pineapple cobbler, apple cobbler, and peach cobbler! Yum! Then it was back to the campsite. We enjoyed another evening of sitting around the campfire and the boys had fun running around in the dark playing! 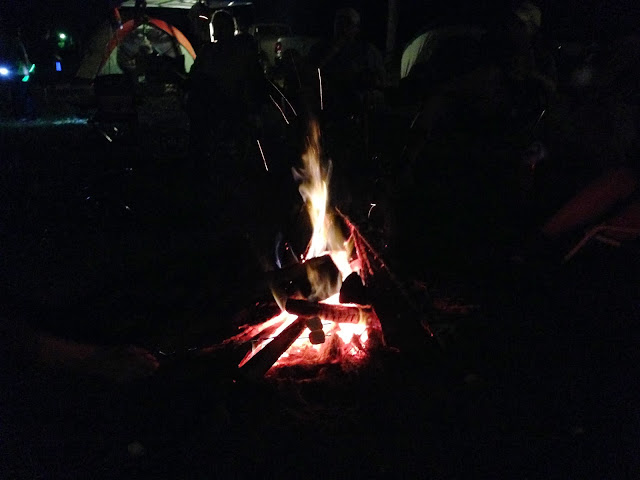 That night we all slept a whole lot better! I think we were all exhausted! We did get woken up in the middle of the night by Hayden. We heard some shuffling around and he was standing up (with his eyes closed) trying to find a way out of the tent. Then I saw him grab himself and I told him to not go pee! Andy got up with him and as Andy was putting on his shoes Hayden ran out of the tent in his underwear wearing one shoe and carrying the other! He was running as fast as he could towards the woods...and he was still asleep! Andy finally caught up to him and asked him what he was doing. Hayden told him he was going to the tent. Andy took him to the bathroom and they came back and went back to sleep. It's funny now but it was a little scary at the time. Hayden was apparently sleep walking because he doesn't remember any of it. If we hadn't woken up and he had gotten out of the tent and took off it could have been bad! So glad we heard him!

The next morning we had another yummy breakfast....breakfast burritos. Then it was time to clean up and pack up. We had a blast camping again this year and can't wait for our next camping trip!

I will say that my shower and my bed felt soooo good when we got home! ;-)

QOTD: Do you have any experience with sleep walking? Should I be concerned about Hayden?