I hope everyone is having a great weekend! We've had some cold weather this weekend and it's been fabulous!!! It really feels like fall! Of course this week the highs will be back in the 80's! Joy of living on the Gulf Coast!

It's time for another runner spotlight!!! If you are interested in being spotlighted on my blog please email me at mindy@roadrunnergirl.com! I'd love to spotlight you! I'm running pretty low on spotlights so don't hesitate to email me!!! You don't have to have a blog to be spotlighted...you just have to be a runner! ;-)

Today I am spotlighting April from My Real Food Family! She loves half marathons and has run over 50 of them!!! Keep reading to learn more about her! When and why did you start running?  I started running in 2006 when I was in my early 30s.  Although I wasn't overweight, I was starting to gain a few extra pounds and knew that I wasn't healthy.  After I walked my first 5K race, I saw the variety of people that participated and decided that I would try running so I found a Couch to 5K program and struggled through that.  After a few 5K races, I really enjoyed trying to beat my previous times.

What is your favorite race and race distance?  The half is my favorite distance.  I would try to run several each year and keep my training up.  Just before I turned 40, I decided that I wanted to complete 40 half marathons by 40.  A few days before my 40th birthday, I crossed the finish line for the 40th time.  Then I went on to run 10 more half marathons before my next birthday.  Kind of hard to deny that I love the half!  I have had so many amazing experiences in different cities at different races so it’s hard to pick one favorite.  I ran San Francisco this past June and it was really amazing to run across the Golden Gate Bridge.  Another favorite was the Texas Independence Relay, a 202 mile relay.  It was 10 women in 2 vans running across Texas with no sleep.  What’s not to love about that?!?

What is your race day routine?  My typical race day routine is to have a cup or two of coffee and a bowl of oatmeal before heading to the start line.  I don’t really have any pre-race rituals or habits.  I do always like to proclaim that my bib number is my lucky number.  That probably makes me a big dork but I like to keep my thoughts silly, light, and positive before the race.  And 18,479 might really be my lucky number!

What is your most favorite piece of running gear?  Hmmm, this is a tough question.  I love my Garmin and analyzing the split data.  I also love my Race Ready shorts because of all the pockets for fuel, keys, phone, etc.  Can friends/training partners count as running gear?  The ladies I train with each week are completely amazing and definitely my favorite thing about running.  Having an incredible group to run with makes grueling training runs fun and make the time pass quickly.  So I don’t know if that’s technically running “gear” but I wouldn't want to run without them!

Do you follow any diet or take any specific supplements that complement your running?  I only eat real, unprocessed foods.  I never eat fast food and try to make sure that the foods I consume are as close to nature as possible.  I was really amazed that healthy eating could be so delicious.  I didn't even have to give up dessert!

What do you wish you’d known when you first started running?  I wish I would have known how much my life would change because of running.  I was never athletic or into sports and never thought I would be a marathon runner.  I amazed myself with what I am capable of and carry that confidence into other areas of my life.  And if I would have known about the incredible friendships that would result, I would have started running much earlier!

What is your fondest running memory?  I have so many fond memories from running.  I have run several half marathons with my daughters, have run in several different states, seen many beautiful sights.  If I had to narrow it down to just one, I would say it was crossing the finish line of my first half marathon.  That was the moment that I realized how strong I was and that I could do anything I worked hard enough for.

What is one thing that most people do not know about you?  One thing most people don’t know about me is when I actually considered myself a runner.  I had run at least 4 half marathons, a ton of 5Ks, 10Ks, and a couple 15Ks.  I guess because I wasn't fast I didn't think I was a real runner.  I’m not an Olympic runner and will never win a race, but I am a runner just the same! 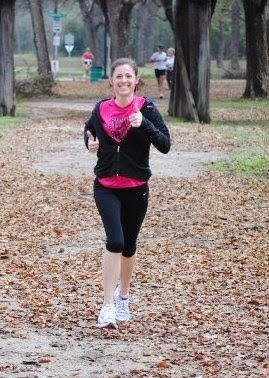 Here are all the different ways you can connect with April!

Thanks so much for sharing with us April!!!

QOTD: Do you prefer cold or hot weather?