Gulf Coast Half Marathon in Mandeville!

Make sure to read all about packet pickup and the day before the race!

We must have been ready to run because Paige and I both woke up about 2 minutes before our alarm was supposed to go off! We got ready pretty fast! I just loved our outfits! 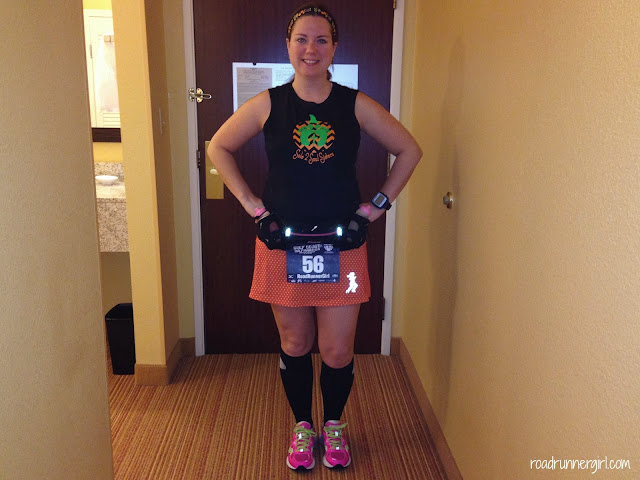 We left about an hour before race time. We had to be there a little early because the start line was in a park and they were closing the roads 45 minutes before the race. We made it there with plenty of time. It was so cold outside (52 degrees...yes that's cold to me) so Paige and I sat in the car a few minutes before we got out. Finally about 30 minutes before start time we ventured into the cold. The sun was just starting to rise. 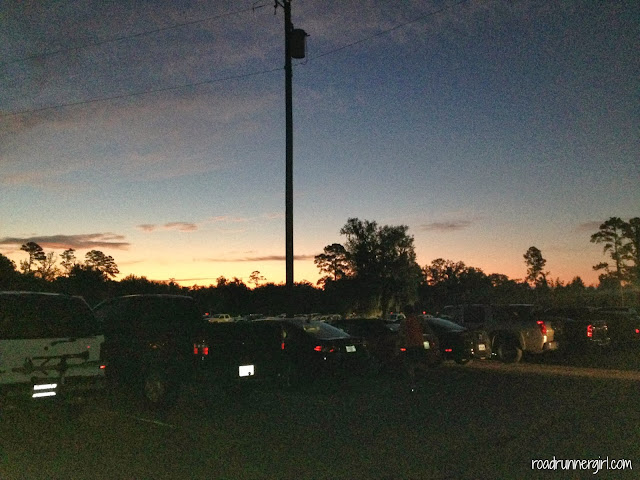 We stood in line for the bathroom for a few minutes and then we headed towards the start line. This race isn't very big so there isn't any corrals. There are just suggested areas for each pace in the starting chute. We took a few pictures first of course!

Yes...we had beach towels wrapped around us! It was cold!!! But it made for some perfect running weather! 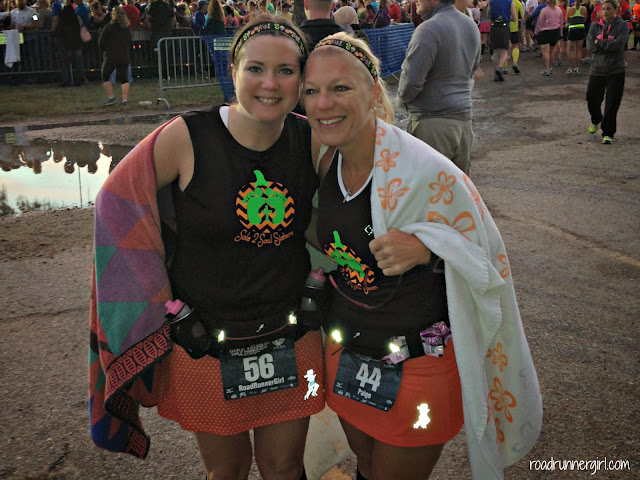 Me and Paige with our matching Spooky Halloween BAMR Bands! I LOVE BAMR Bands!!! 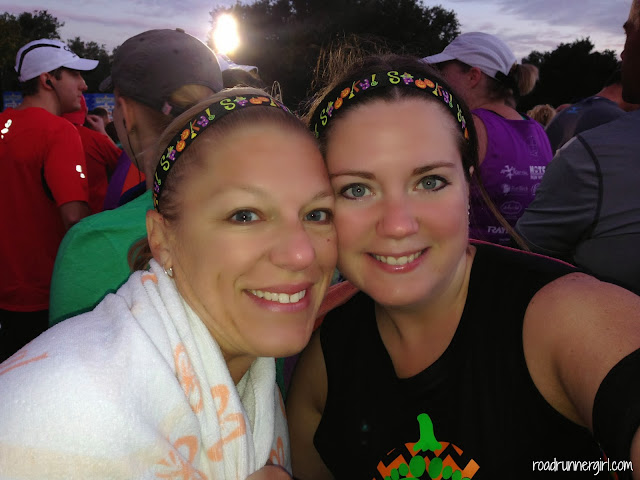 We got in the back of the starting chute. We knew with my hip issue and Paige's hip and foot issue that we were just going to take this race slow and easy. Before we knew it the gun went off and we were headed towards the start line! 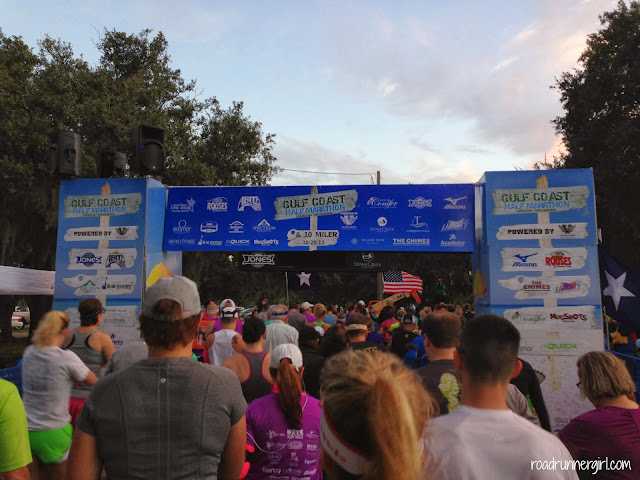 The first few miles felt great! You could feel the excitement in the air from all the runners around you! We got several comments on our outfits which we loved hearing! There's just something about running with a bunch of people...love it! 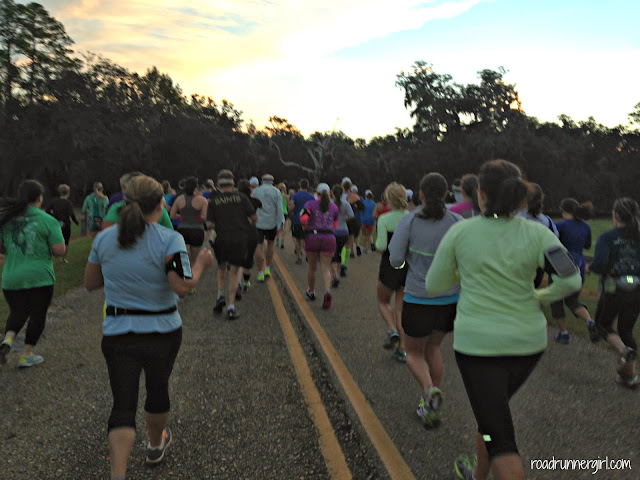 There were even a few guys running in a tutu and pulling a tire behind them! I talked to this guy and asked him why he was doing that and he just said he was training. I can't imagine! That had to have been hard! 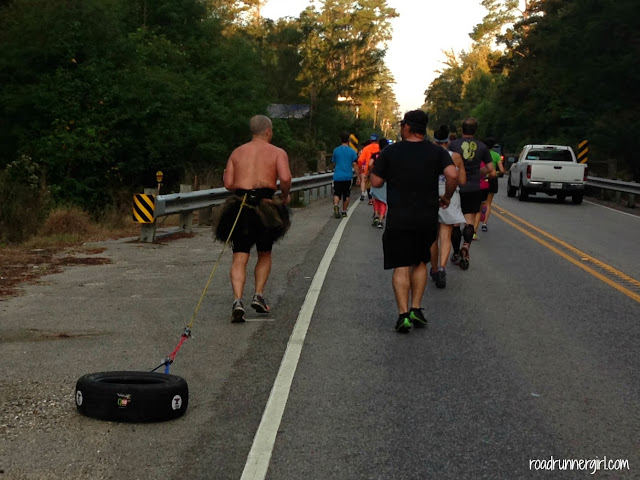 Before we knew it we had made it to mile 3! I was feeling great! I could feel the tightness in my hip but it wasn't hurting. I realized how much I had missed running! 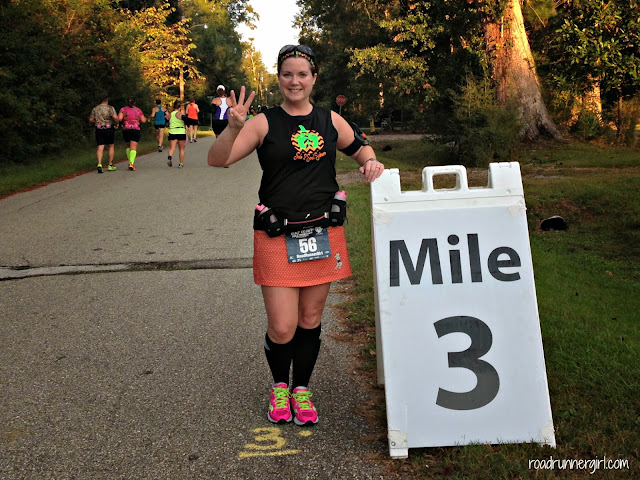 We walked through the water stations and we stopped once for Paige to use the bathroom. Then we turned onto the lakefront. I always love this part of the course. It's so nice running by the water! And the houses here are gorgeous! 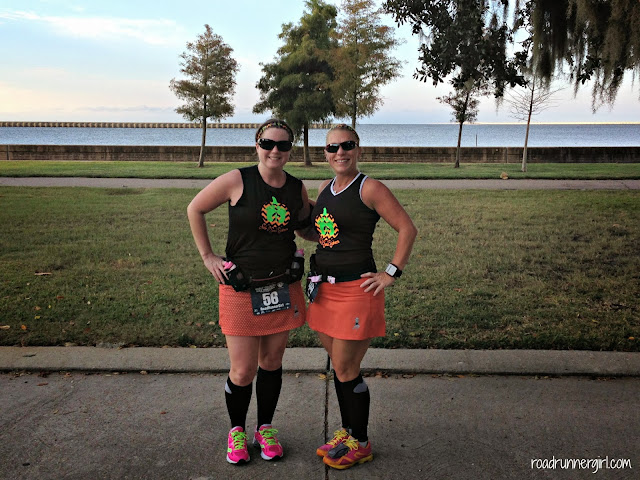 We reached the halfway point and Paige started telling me she needed to walk more. Her foot was really bothering her. But I was feeling great and just wanted to run. But I didn't want to leave Paige either. For some reason there didn't seem to be as many runners at this race this year. So there were times that it felt pretty lonely out there on the course. I didn't want to leave Paige alone. So I walked with her. But when I was walking my right knee started hurting. When we were running the knee didn't hurt. Weird!

Around mile 10 Paige told me to please go. She knows me well and knew I just wanted to take off. I finally did. And I felt great! I ran the rest of the race with zero walk breaks! I remember thinking, "This is what I was born to do!" I LOVE running!

Before I knew it I could see the finish line! I kicked it in gear and heard someone on the sidelines say my name as I crossed the finish line! I grabbed my medal and water and headed back to see who had said my name and to cheer on Paige. It was my dear friend Bart or @oldguyrunning as some of you may know him as on Instagram!!! We had talked about meeting up and getting a picture. The first time we met we didn't get a picture together. I was so happy to see him! 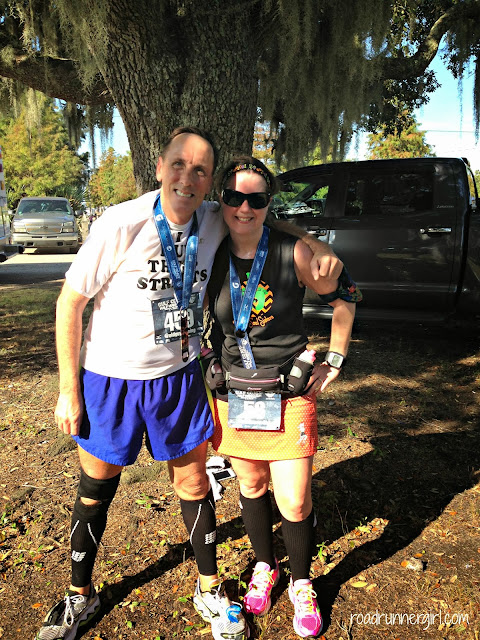 He had an amazing PR with this race! This was his third half marathon and he finished 1 hour and 3 minutes faster than his first half!!!! And in comparison to his 2nd half...he finished about 20 minutes faster! Incredible! This was his last half because he has a bucket list he is working on...3 half marathons (done), 3 full marathons, 3 50K's, and 3 100 milers! WOW! He is such an inspiration!

I had fun hanging out with him while I waited for Paige! I cheered her on as she finished and then she came around and I got to introduce her to Bart! He wanted a picture with both of us and we were happy to pose with him! 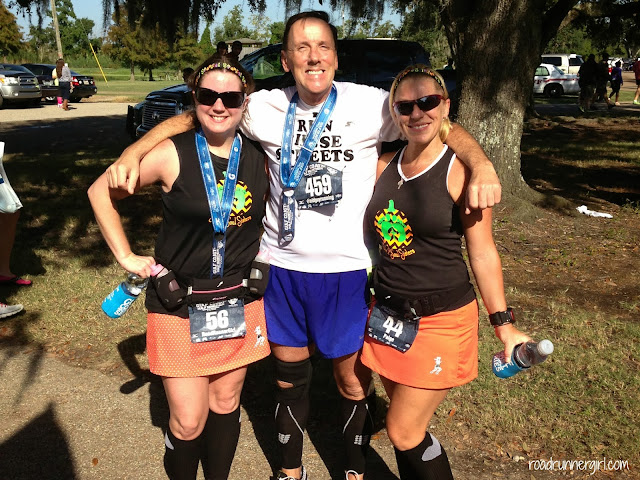 And he was kind enough to take a picture of the two of us! 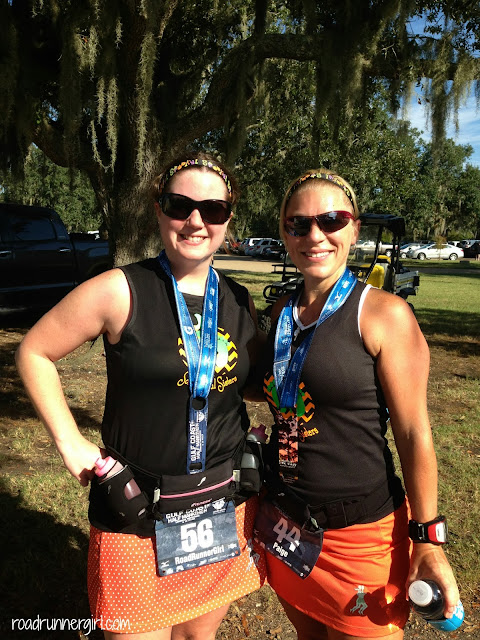 We said goodbye to Bart and headed towards the after party. They had a band playing and several vendors set up. 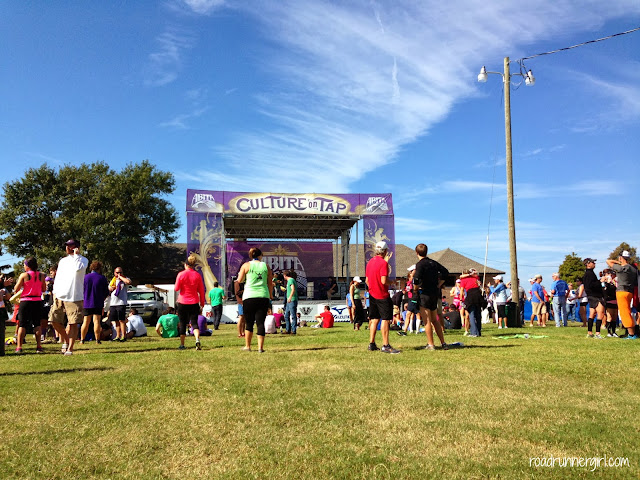 Paige and I saw that the physical therapy tent was giving out free massages and there wasn't a line so we headed that way! We both wanted to ask about our hip. I showed the PT where my hip pain was and she asked if it was deep. I told her it was and she said it was probably a tight hip flexor. She stretched me out really well in that area. Paige took a few pictures and made me act like I was in pain lol! I really wasn't...the stretching just felt really good! 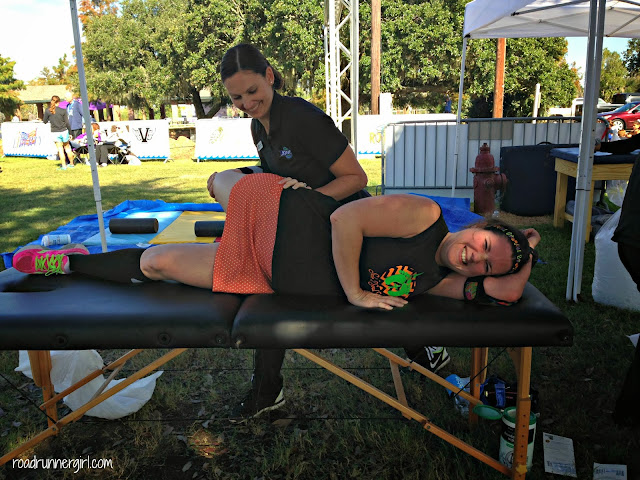 After the mini massage Paige and I took advantage of the foam rolling area. It hurt so good!!! ;-) Then we went on the search for food. There were several food vendors but the best one gave you a fourth of a hamburger. It was plain with nothing on it but it was the best burger I think I have ever had!!!

We hung out for a few minutes and then headed back to our hotel for a shower.

After we showered and dressed in our new $10 shorts we had gotten the day before and our race shirt we headed home. We decided to stop at one of the casinos and eat lunch at the buffet. It was super yummy! 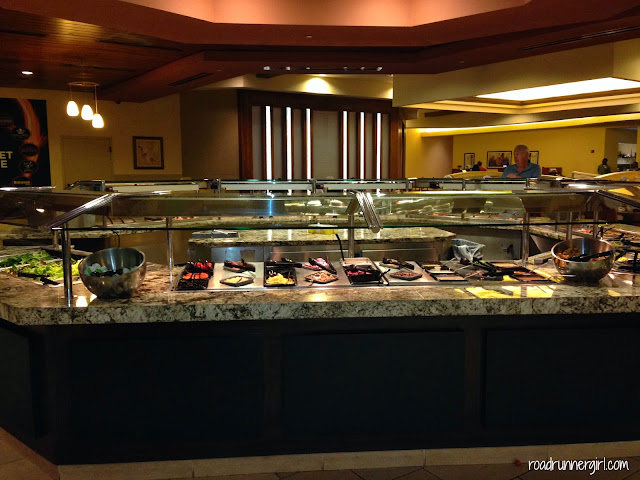 Can you tell my body was craving some protein? Look at all that meat lol! 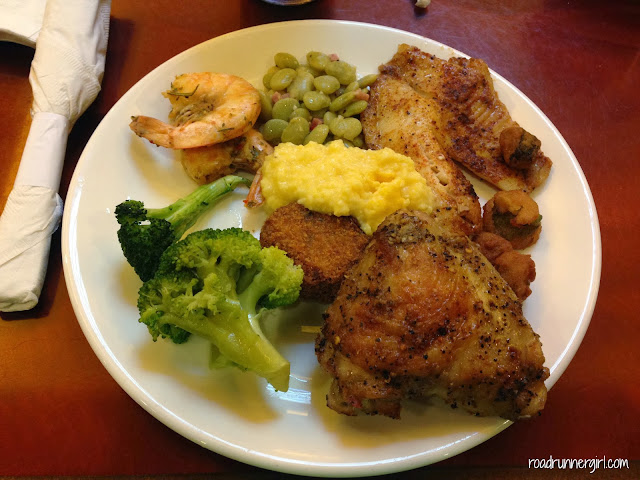 As the day went on my knee started hurting and aching more. It started out hurting on the inside. The next day it was hurting on the outside and there is a visible bruise. I think I remember hitting the outside part of my knee on something. I'm wondering if the running brought the bruise out? I'm not sure but I really hope it's not an injury. First my hip...now the knee. And it's on the same side. I feel like I'm falling apart lol! All I want to do is RUN!

So what was my official time for this race? 2:45:58....not my best but also not my worst. I know I would have rocked this race if I hadn't had the hip issue. I felt so great and the weather was perfect for a PR! 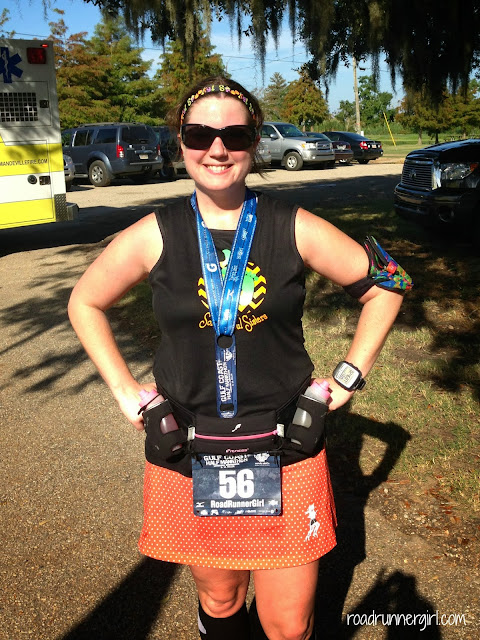 #17 is done! And I got an awesome medal and super cute shirt out of it! 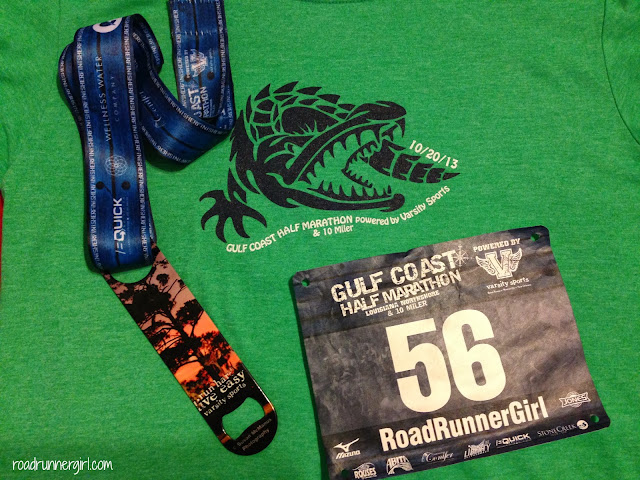