So you're injured. And the doc tells you that you can't run the race. So what do you do besides cry? Go to the race anyway...as a spectator! Yep that's exactly what I did this weekend for the Pensacola Marathon!

This race was my very first half marathon and I ran it last year too. I was really looking forward to running it again...but the hip and knee wouldn't let me. But I didn't let it stop me from experiencing that fun race atmosphere!

My alarm went off at 3:55 AM that morning. I got ready...but with no stress. It's always hard for me to eat that early before a race but I do because I know I need to. This time...I wasn't hungry so I didn't eat. But I did have coffee...which I normally don't have before a race because it always makes me have to go to the bathroom. Then I headed to my friend Misty's house, hopped in a car with 4 other ladies, and we headed to our meeting stop to meet our other friends! But first we had to take a picture....there's nothing like a picture in the parking lot of a gas station lol! And yes...I may not have been running but I still wore the outfit!!! ;-) 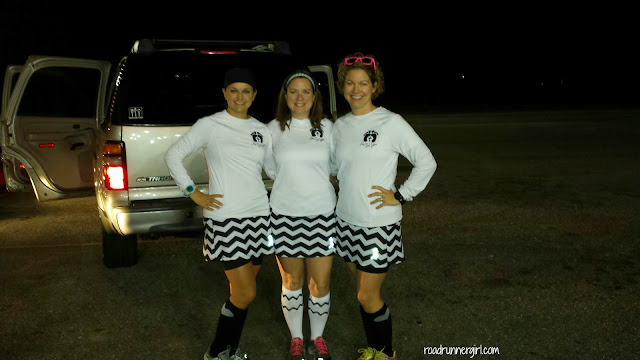 Then we drove the 45 minutes to Pensacola. We made it with about an hour until the start time. Unfortunately my friend Misty hurt her back a few days before the half and couldn't run it either. I was so sad for her because this was her first half and she had trained so hard. But that also meant I had a cheering partner! 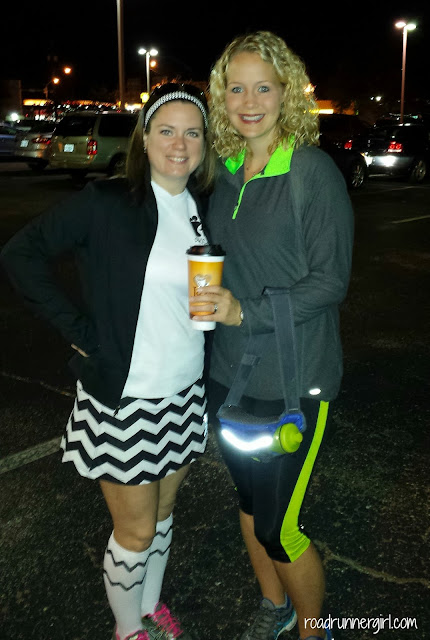 We had plenty of time to hit the porta potties (several times)! There were several of our Sole2Soul Sisters running this race! We were able to get a group picture! But check out the photo bomber in the background lol! I have no idea who that guy is! 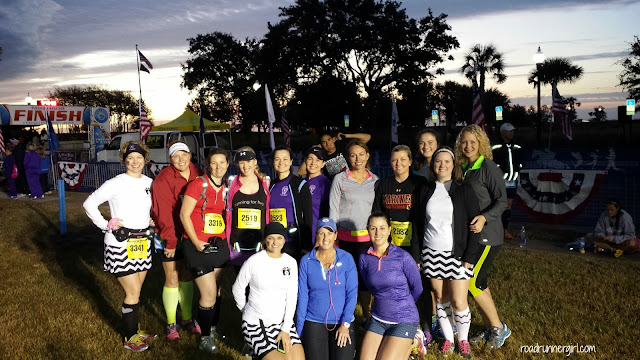 After the picture we headed to the area where they were having a Bible devotion before the race. This guy did an awesome job! He talked about how being a Christian compares to running....perseverance and endurance are key! 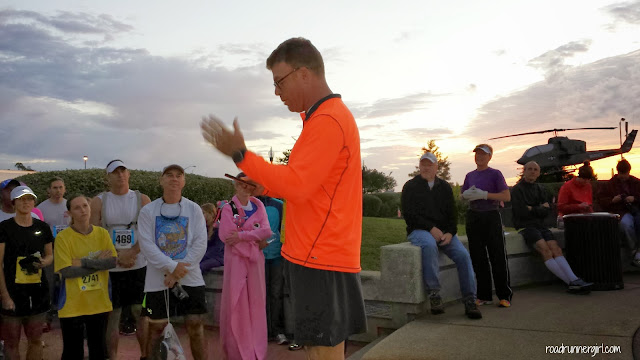 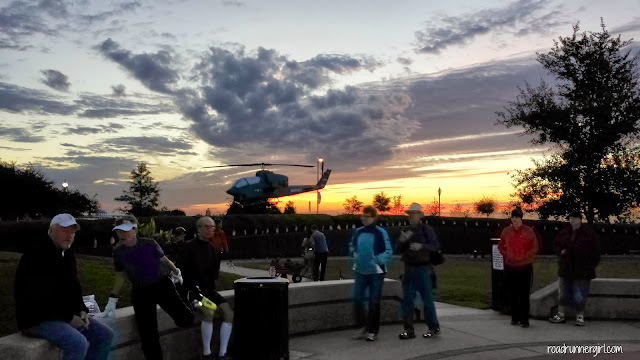 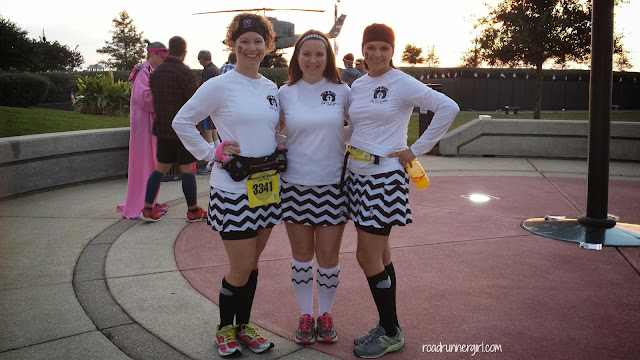 It was almost start time and the girls running wanted to use the porta potties one last time. While standing in line with them guess who I saw? My friend Bart (oldguyrunning)!!!! You may remember me talking about meeting him at the Gulf Coast Half Marathon in Mandeville. This was his first marathon of his bucket list (3 half marathons, 3 full marathons, 3 50ks, and 3 100 milers)! I was so excited to be able to give him a hug and wish him luck! And...I got to meet his sweet daughter too! 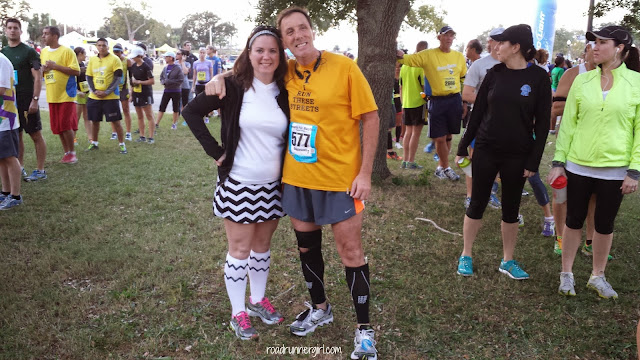 Then our friend Jennifer found us! She was supposed to meet us earlier but didn't. So we had to take another picture with her in it! This was her first half too! 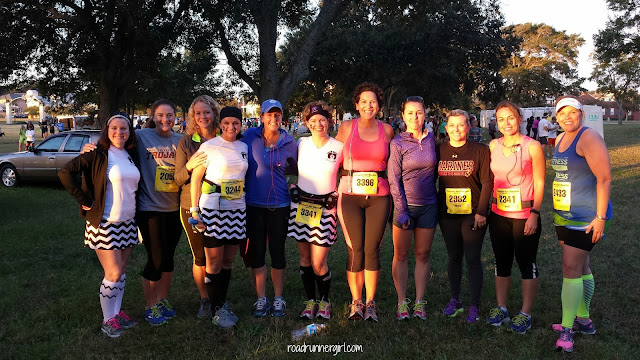 Finally it was time to line up at the start line. I'm not gonna lie...I got a little teary eyed when I didn't get to line up with them. :-(

Misty and I wished our friends luck and headed to a spot where we could see them running. It was just before they hit mile one. We got to see the wheelchairs and the fast runners! It was pretty cool to see the beginning of a race. Usually I'm in the middle of the running crowd! 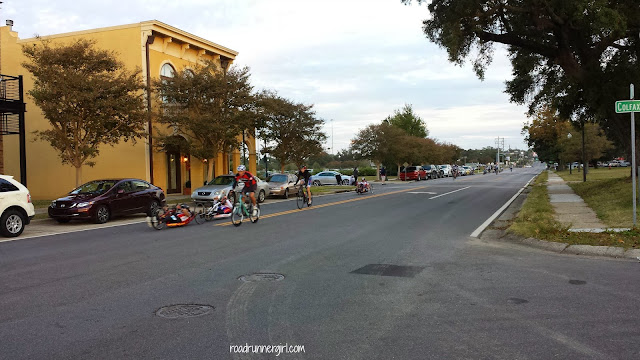 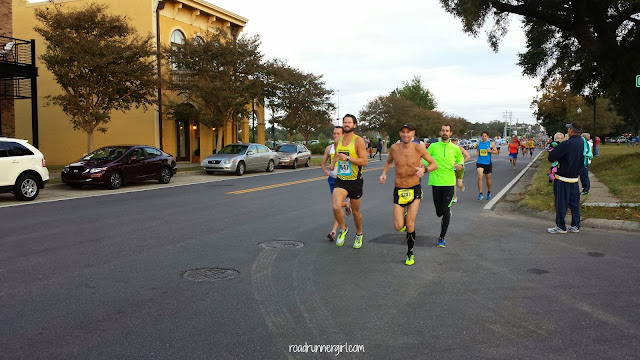 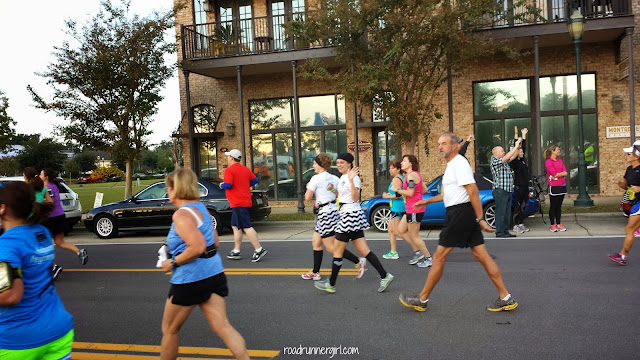 We stayed and watched the entire race run by. I got to see Regina from Life's-Run who was running her first marathon! I saw Jodi from 13.1 miles to Disney who was running her first half! And I saw my friend Gina and Tammy from Ginger Mantra all run by! I loved seeing them! There were a few people I missed...I would have loved to have seen Erica from Erica House but I didn't.

Then it was time for some fun while we waited on our friends! Misty and I were both hungry so we decided to go get some breakfast! Yes....they run...we eat! ;-) Someone had told us about a favorite place of the locals called Bagelheads. It was only 0.6 miles away so we walked there (see...I got a little exercise in)! 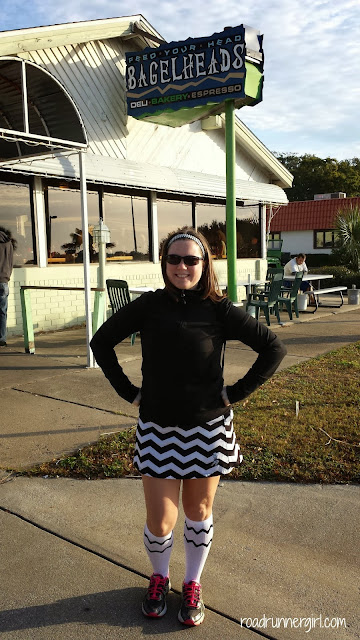 They had every flavor bagel you could imagine! There was another case full of them that I didn't get a picture of! 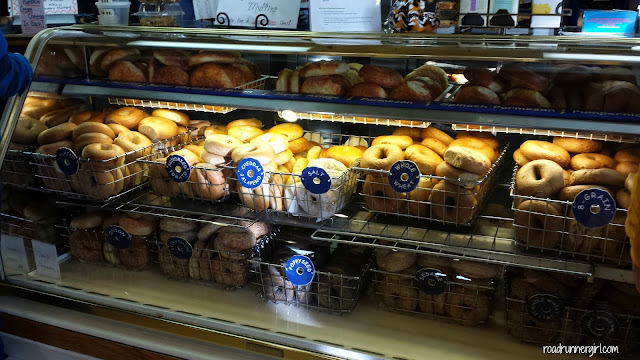 I got a fancy cold coffee (can't remember the name but yum!) and a chocolate chip bagel with plain cream cheese. It was good but they put a little too much cream cheese on it for me. And it was huge! I only ate half of it! 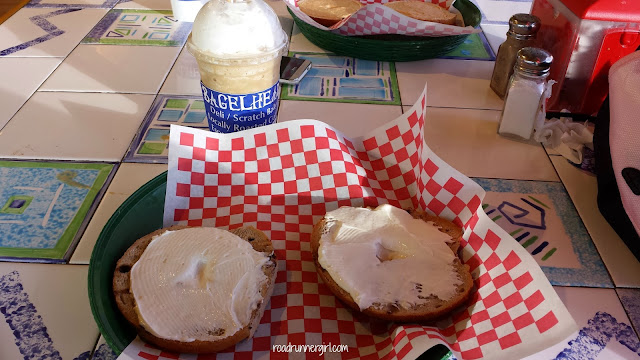 After breakfast we walked back to the finish line. At this point people were already coming in from the half. We cheered for about 30 minutes before we spotted our first friend! 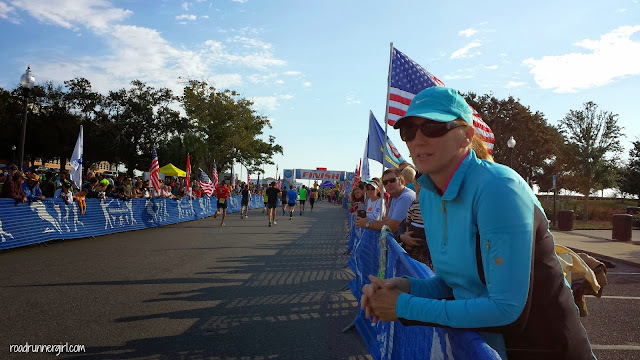 I even saw Tammy from Ginger Mantra come in and took this cute picture of her! I was so happy when she came to find me after she finished! I love meeting other bloggers in real life!!! 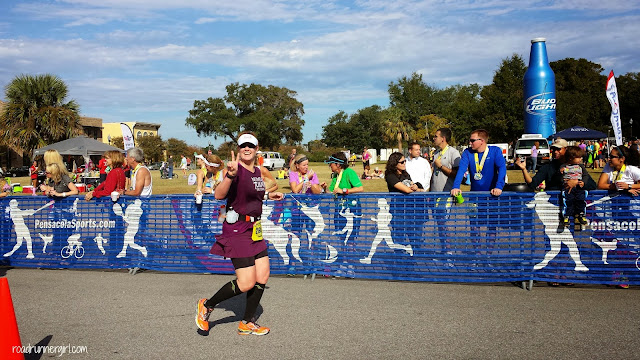 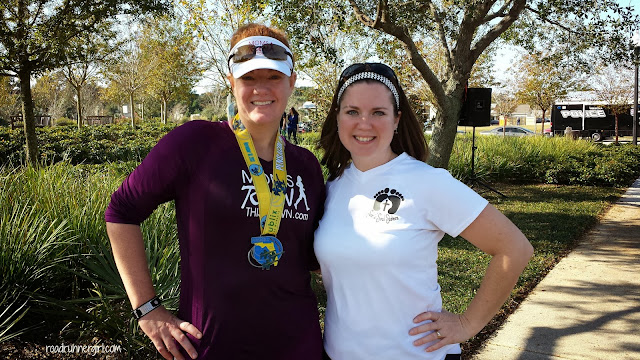 I really enjoyed spectating and cheering at this race! I was a little sad at times because I wanted to be out there running. But I know that in order for me to run races in the future I have to listen to my body and that's what I was doing.

It seemed like a great day to race. Several of our girls PRed on this hilly course! I was so proud of them!!!

QOTD: Have you ever been a race spectator? Or a race volunteer?