Last week me and my boys met one of my sweet students from last year to go fishing! My boys have never been fishing! Yes I know...we live on the Gulf Coast and have never taken our boys fishing? What's wrong with us? Well...when your hubby doesn't fish it isn't a big priority. So I was so excited to give them this experience!

One of my sweet students from last year's Mom and grandparents invited us before the school year ended. This summer has flown by so we finally got around to doing it. We met them at a popular restaurant down at the beach called Lulu's (Jimmy Buffet's sister Lucy's restaurant). We got on the boat there and headed down the Intracoastal Waterway to fish. 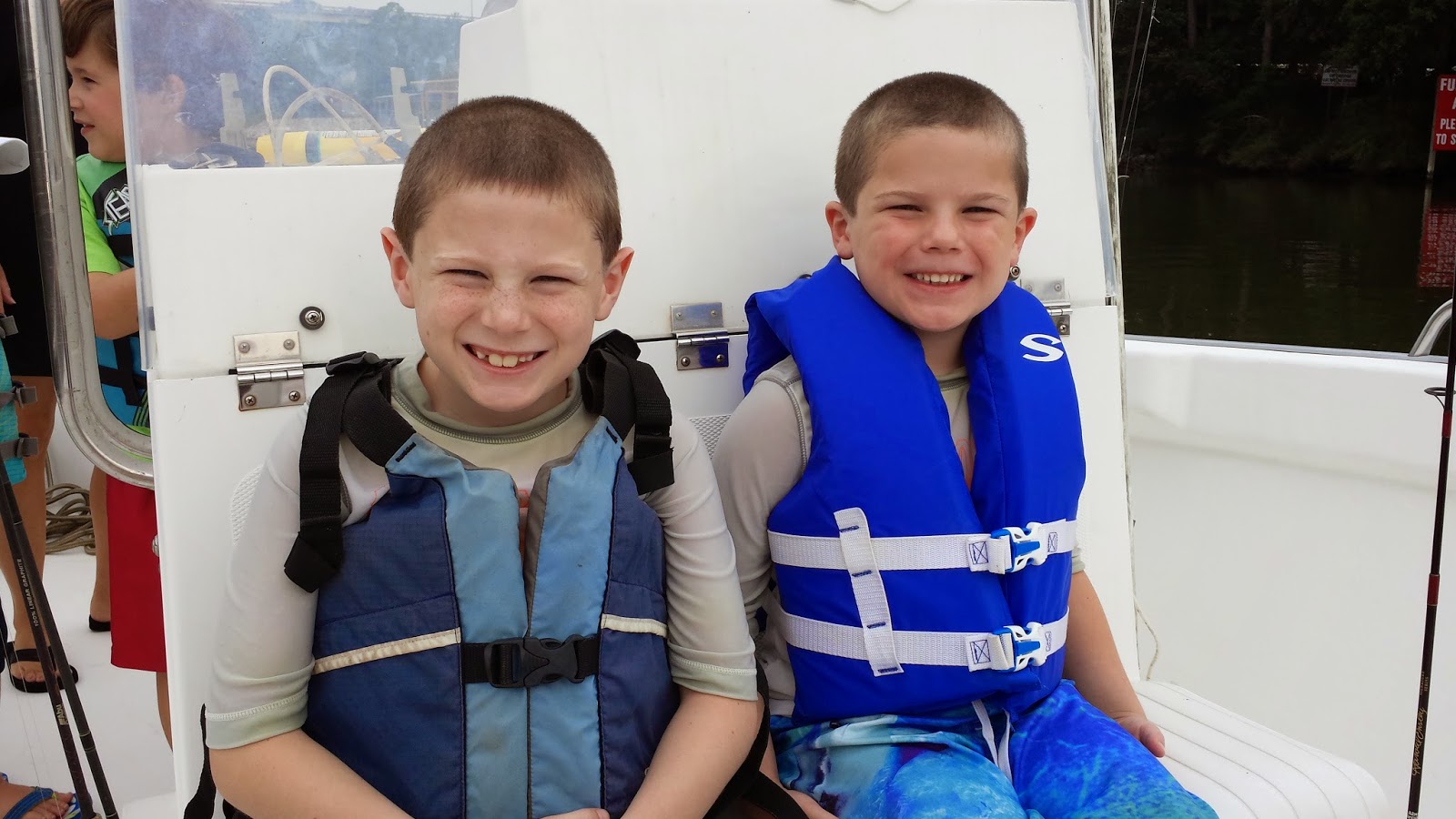 My boys loved the boat ride just as much as fishing! They've never been on a boat either! They kept telling me they had been on a boat...the ferry boat that takes you to the Magic Kingdom! I had to explain this was a lot different lol!

We got their fishing poles baited with some shrimp, casted it in the water for them, and there they were! Fishing for the very first time! 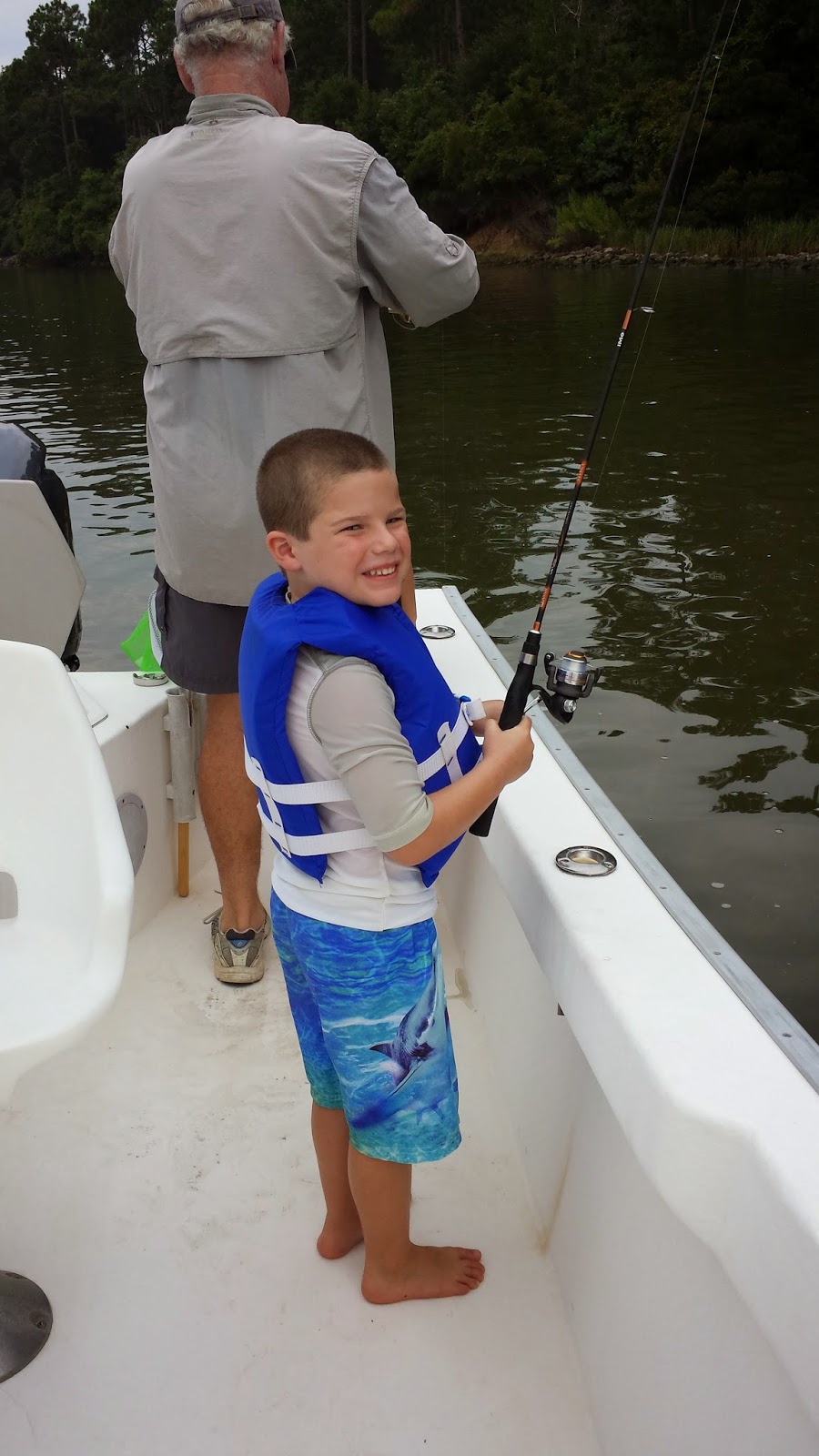 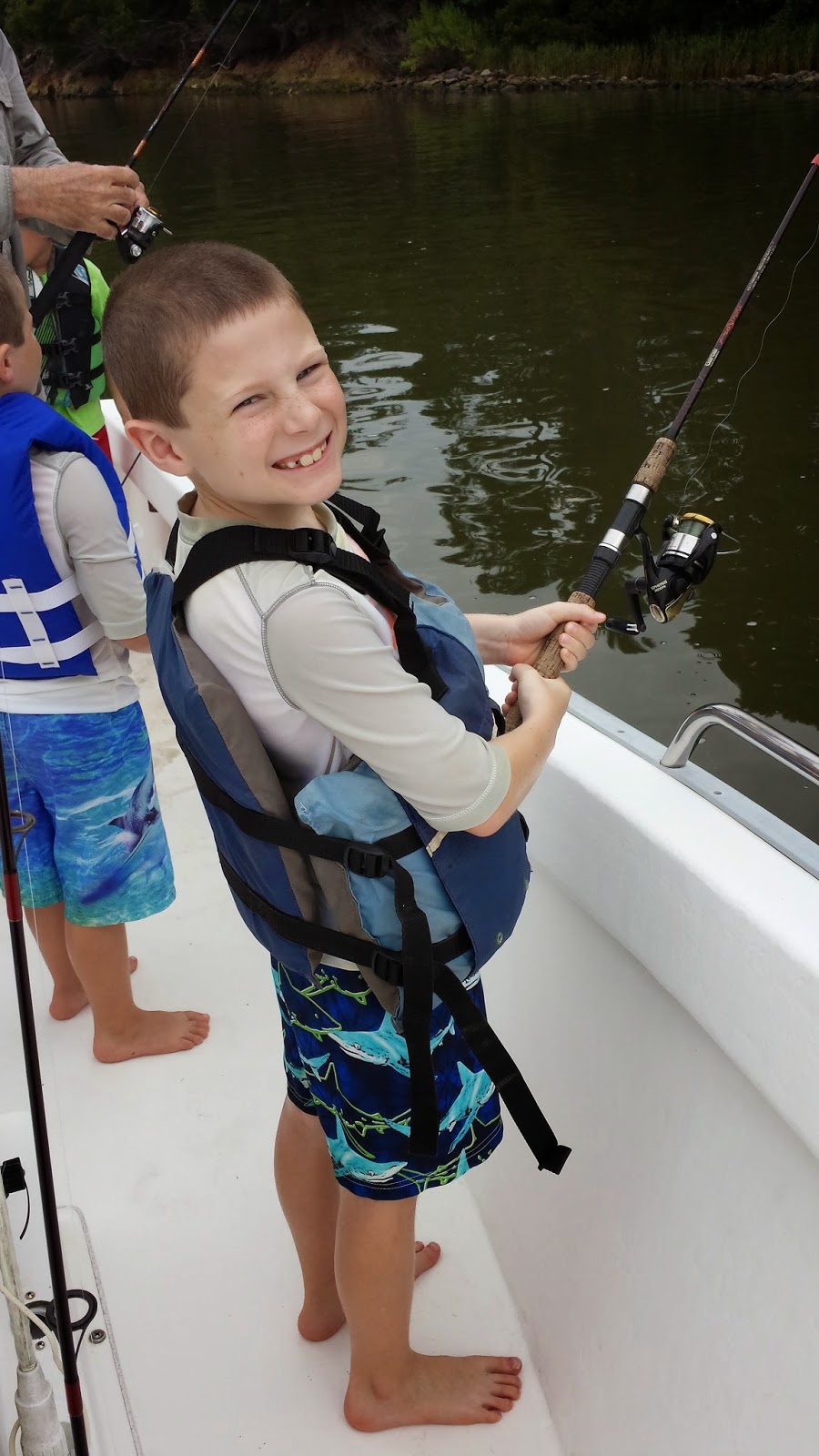 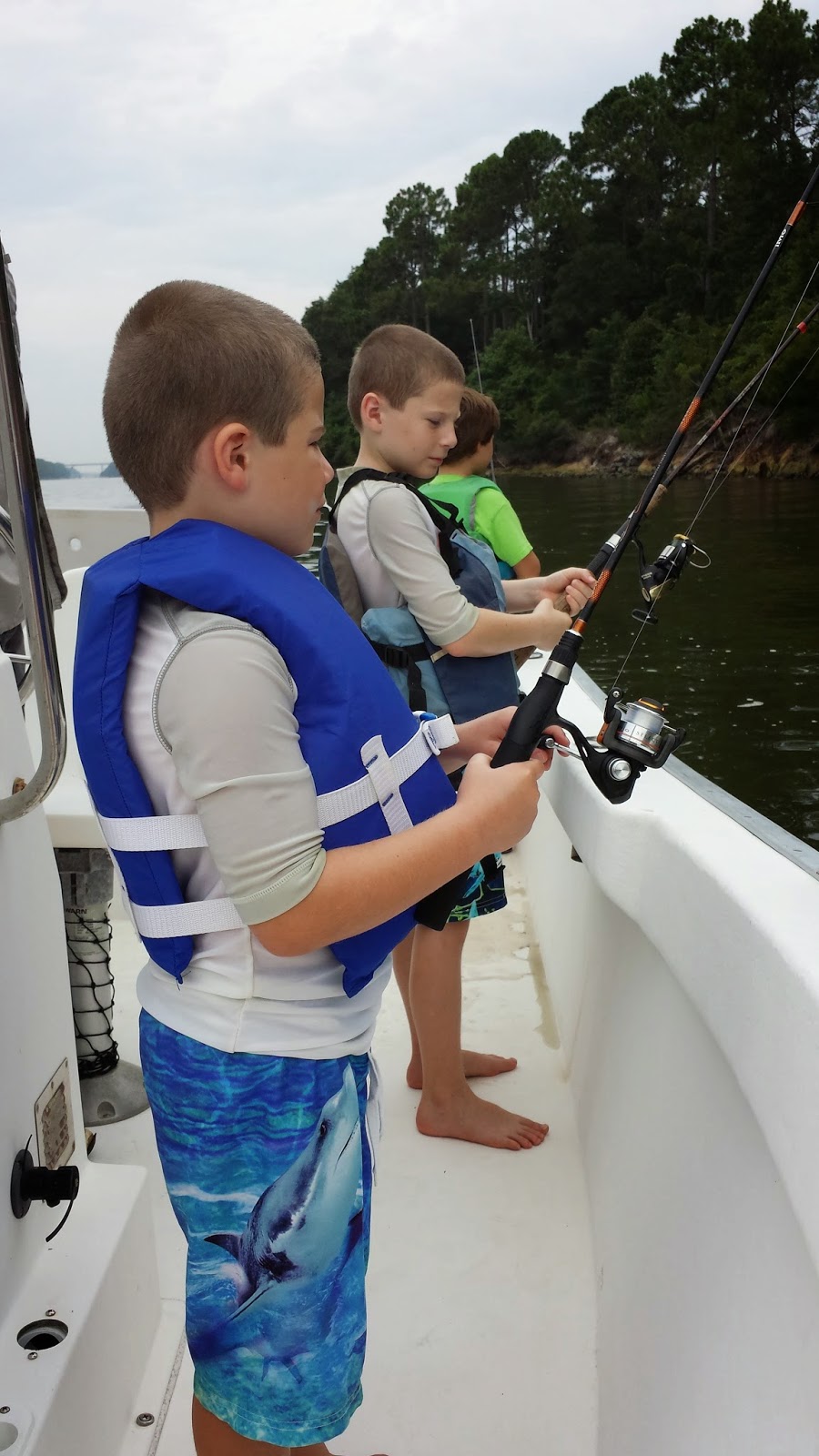 Before we knew it Hayden had a bite! He reeled in his very first fish ever!!! 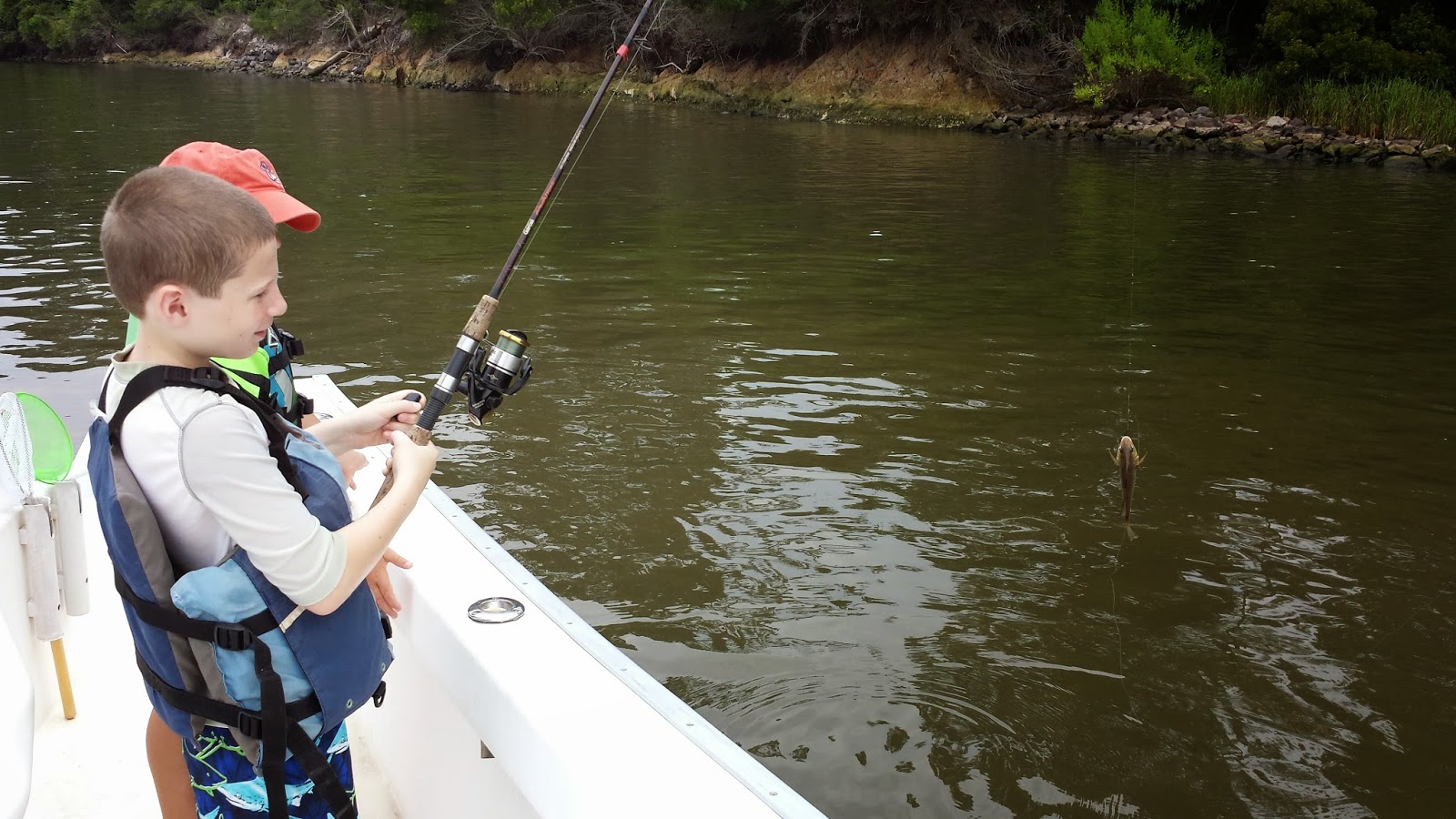 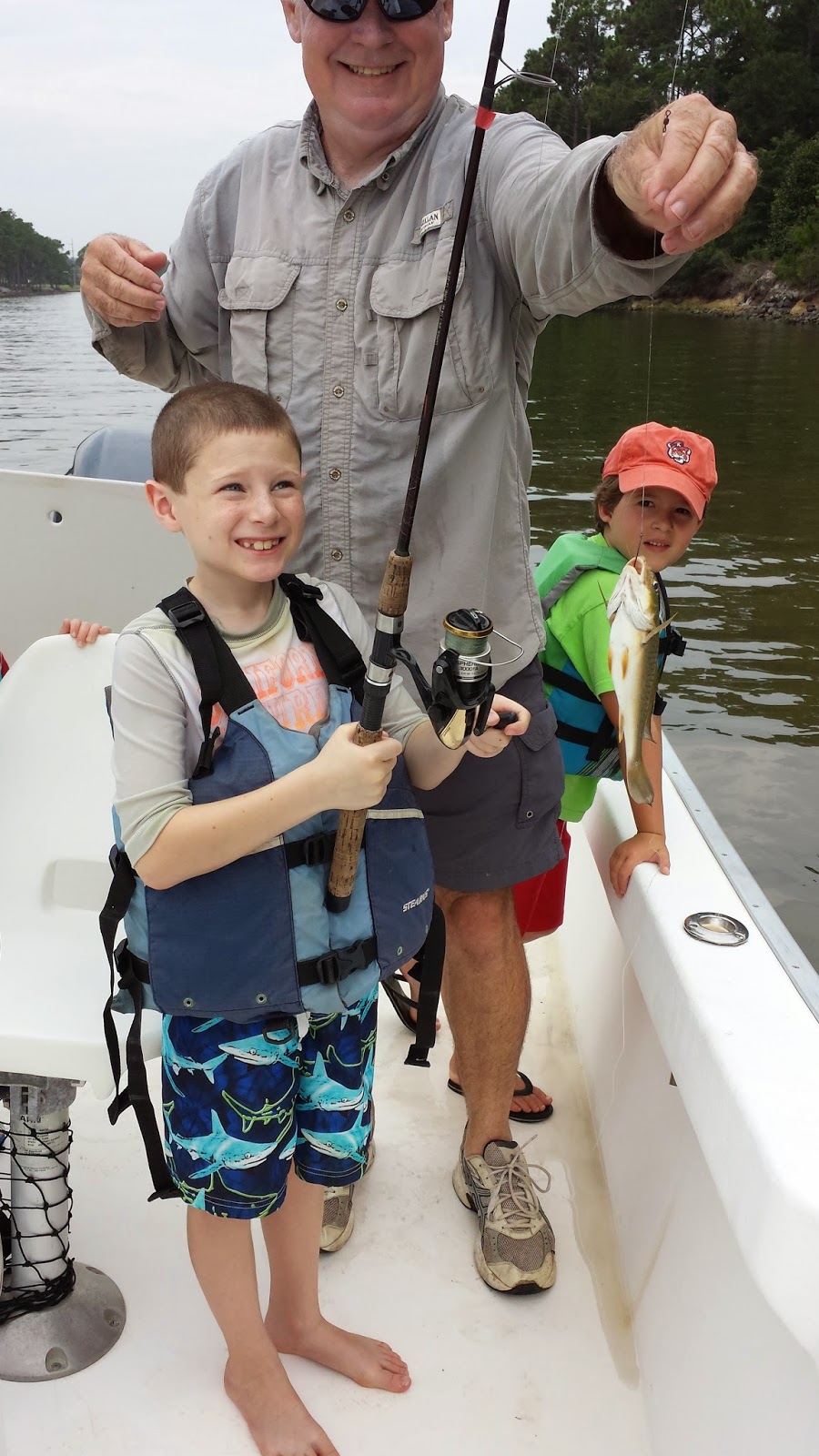 I love Hayden's face in the picture above lol! He wasn't so sure of that fish lol! And then....not long after he caught ANOTHER fish! A pin fish this time! Sawyer was getting a little antsy at this time because Hayden had already caught two fish and he hadn't caught any! But before long he caught his first fish!!! 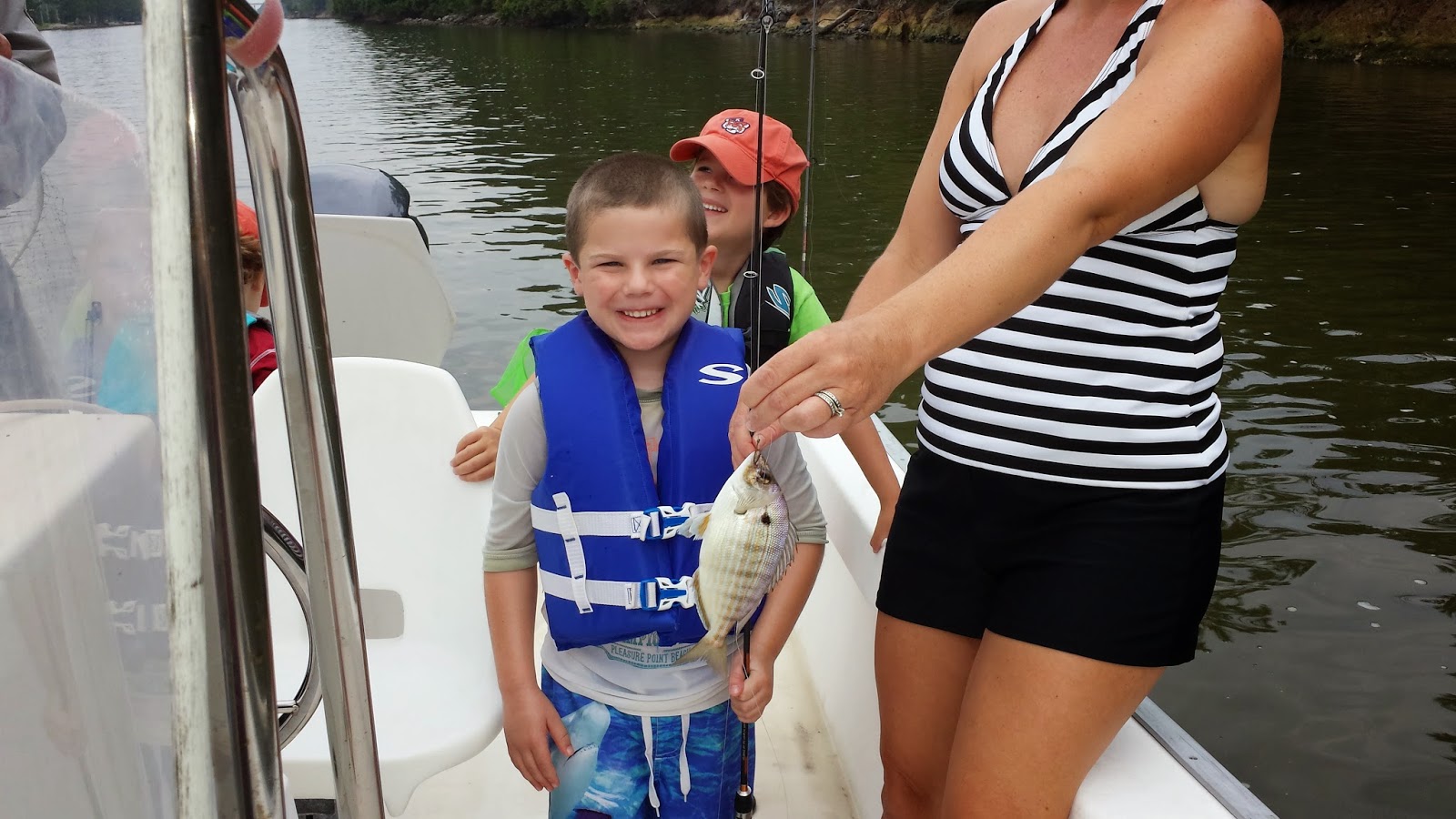 Hayden looks like a true fisherman in this picture! :-) 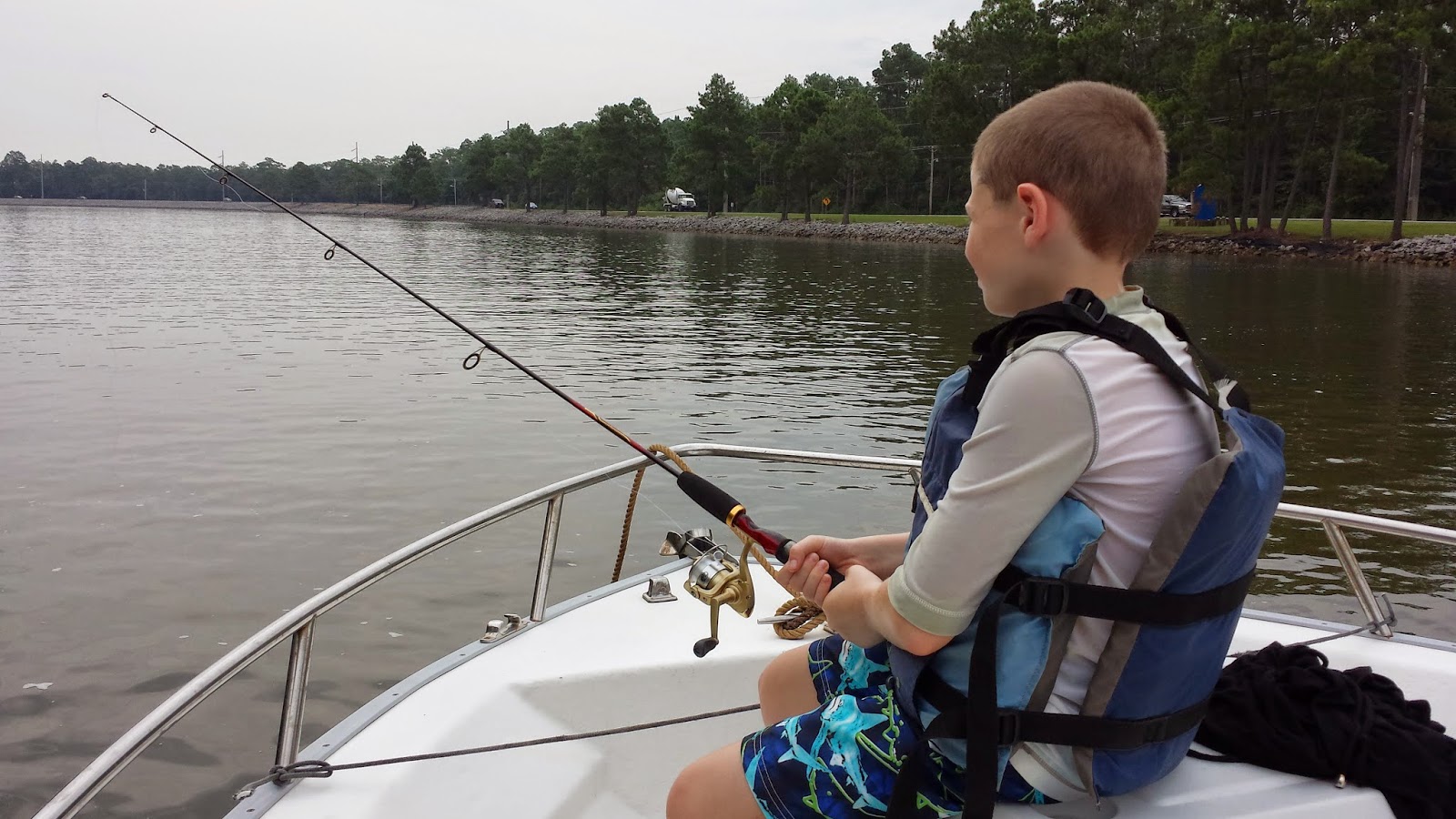 Then Aiden (my friend's son) caught a HUGE red fish!!! All the boys were in awe!!! 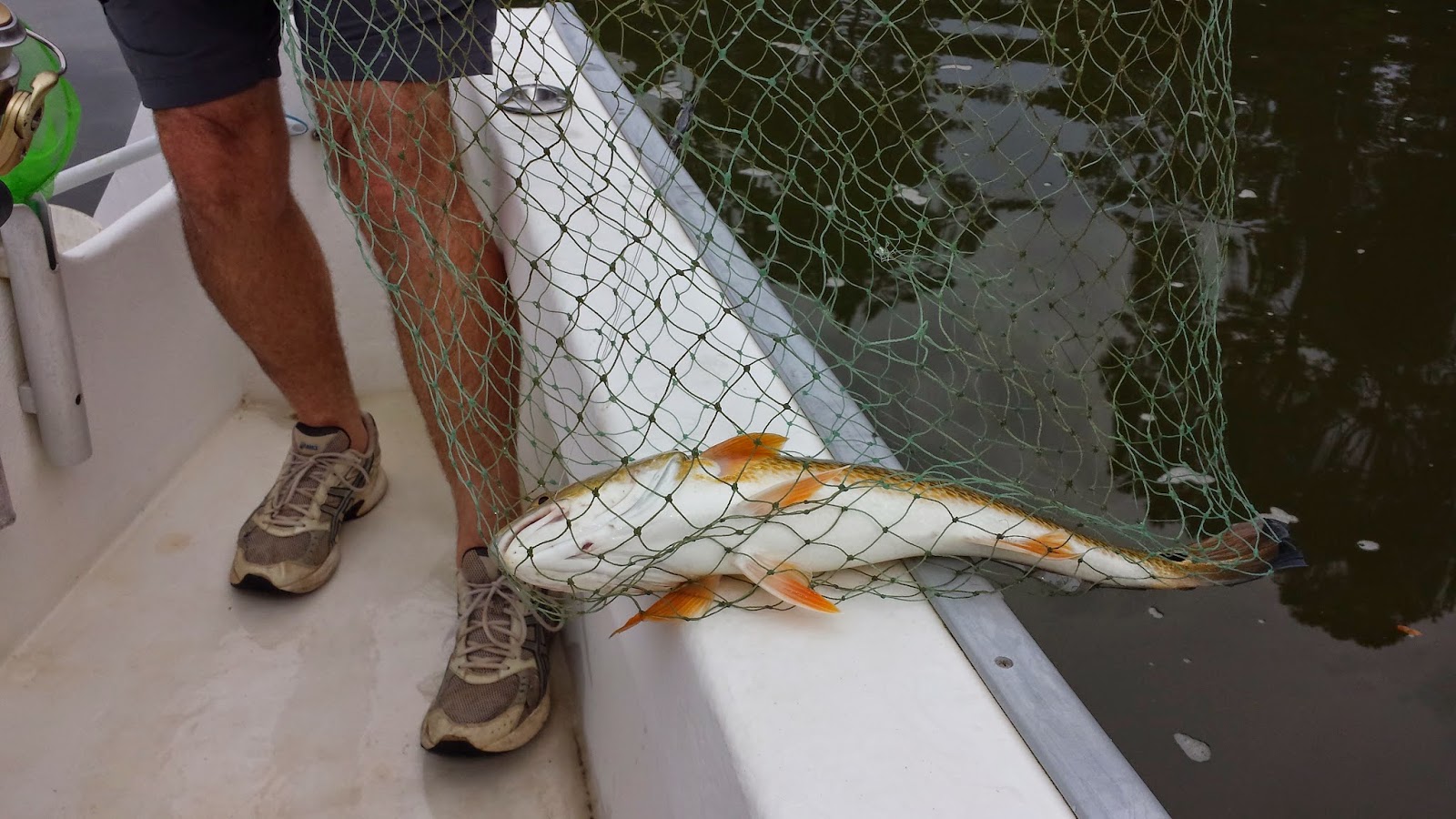 They all wanted a picture with the fish! 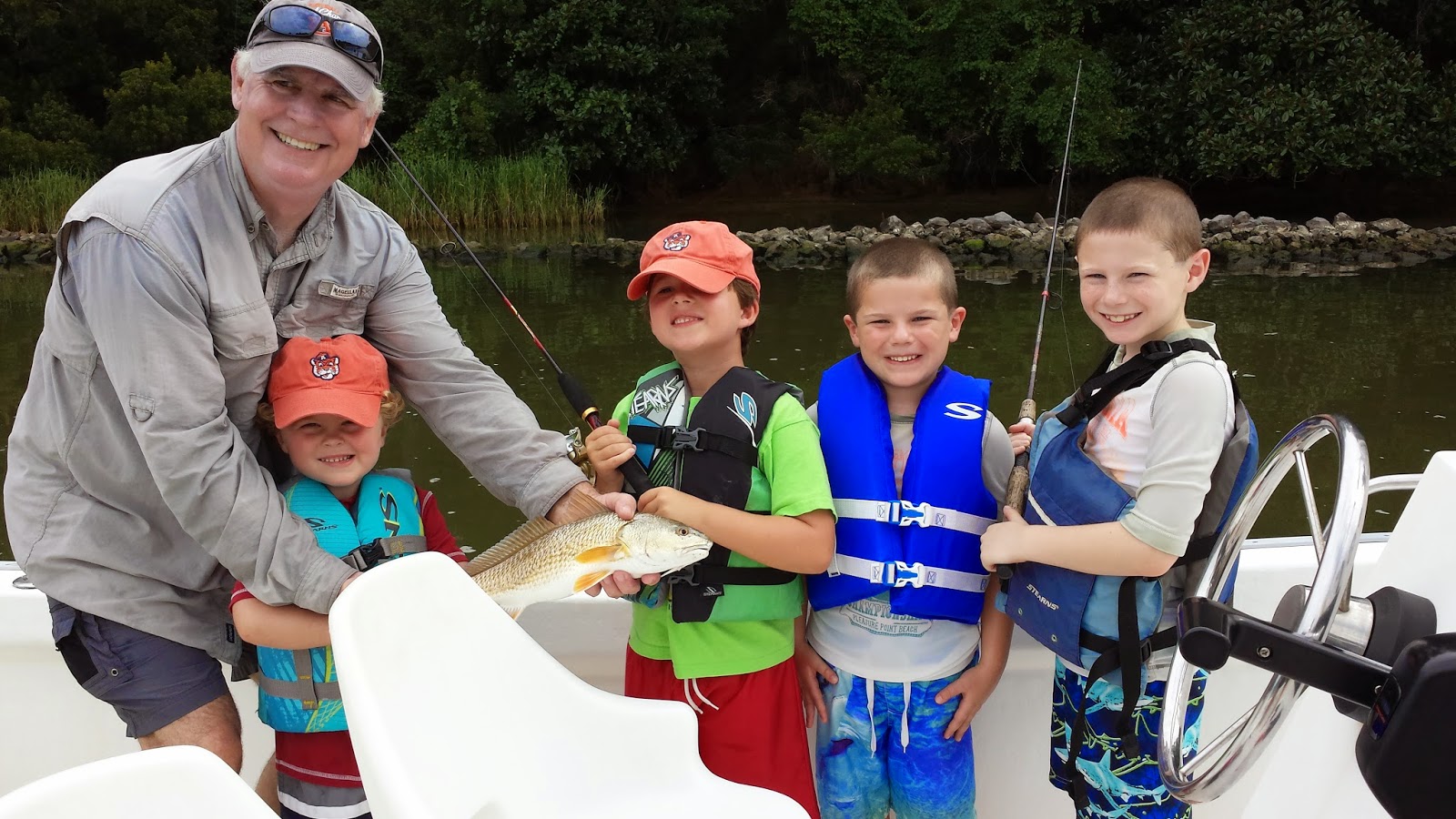 Then Hayden caught a smaller red fish of his own! 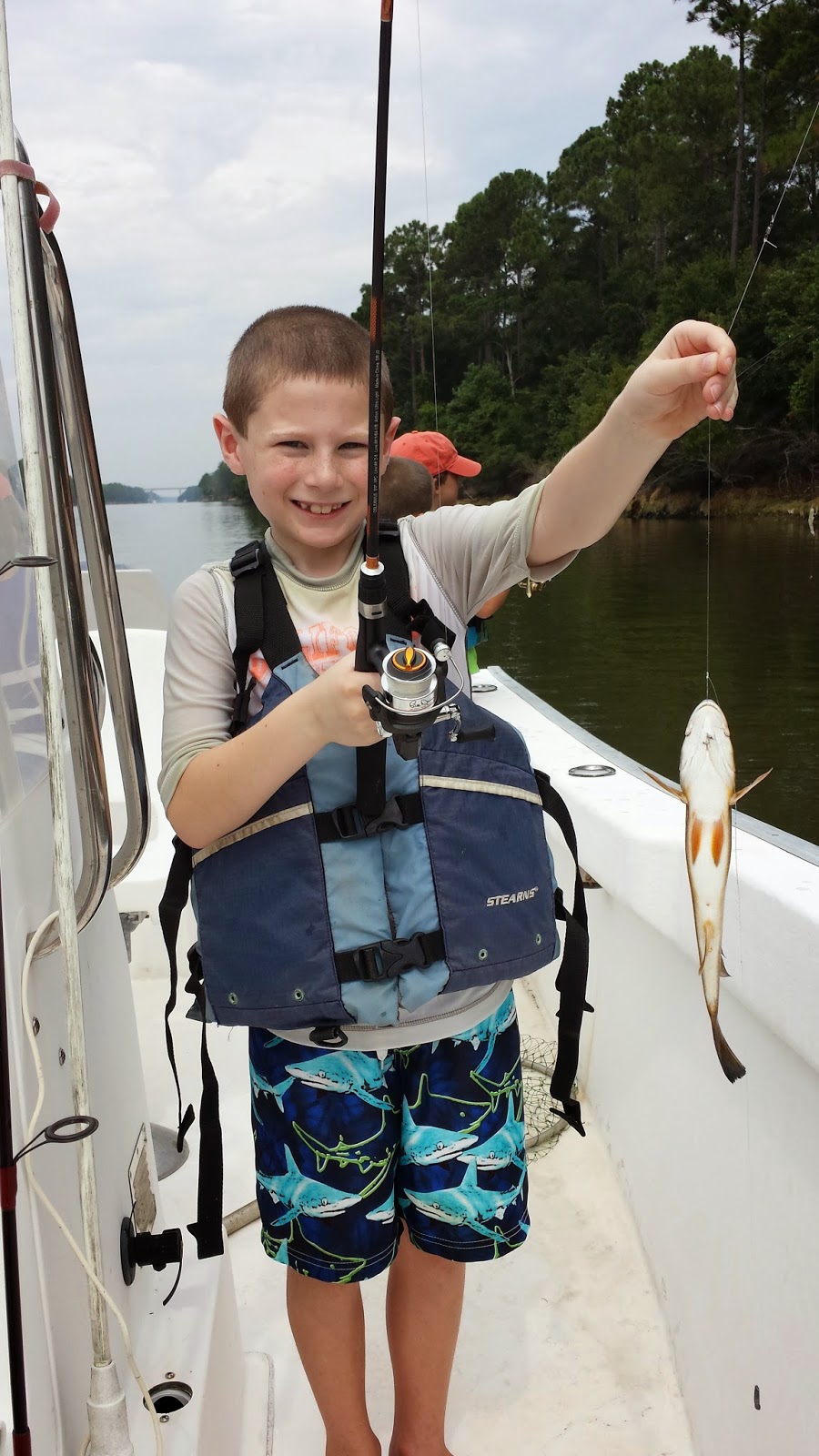 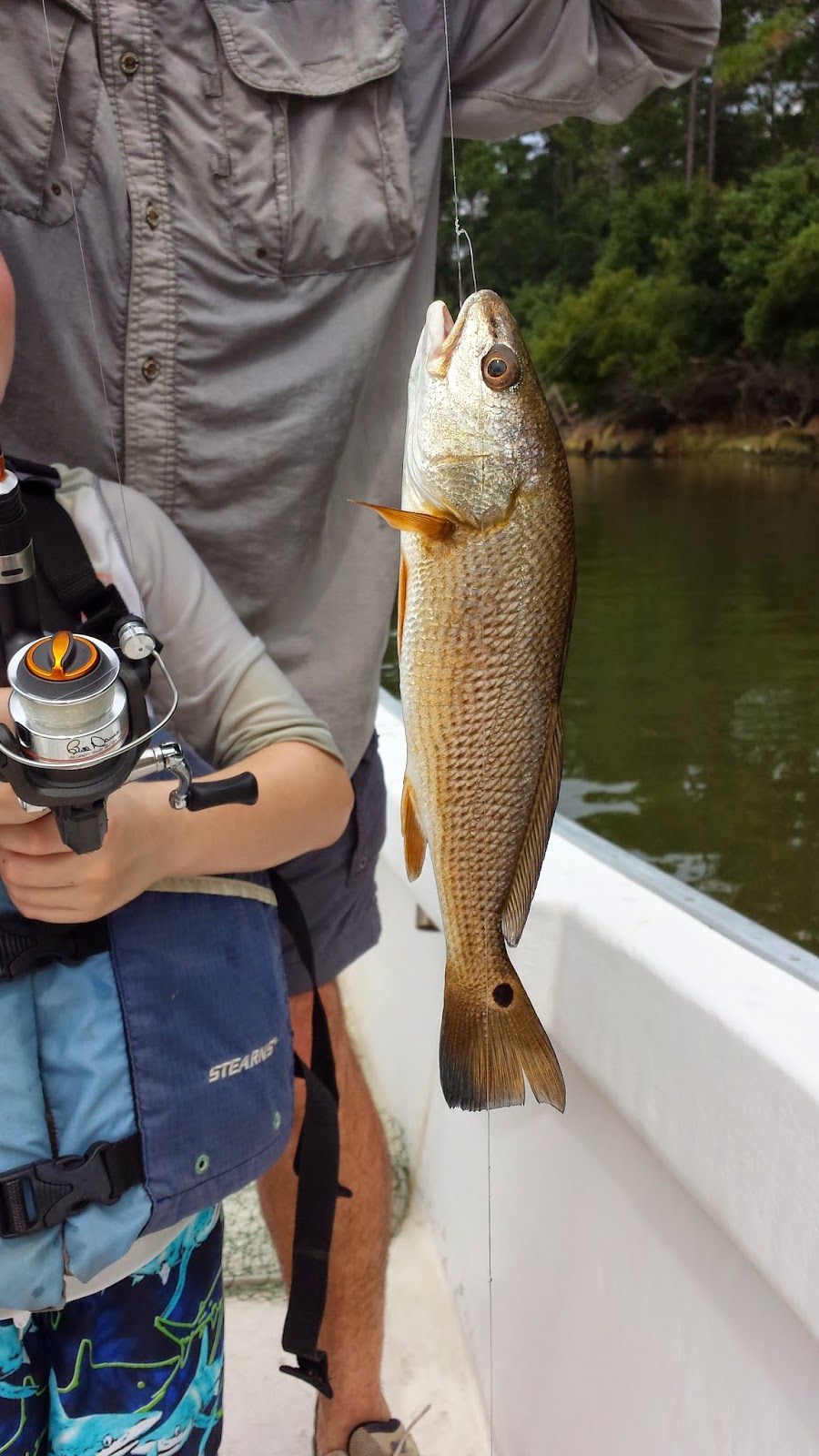 And Aiden caught another big one!!! 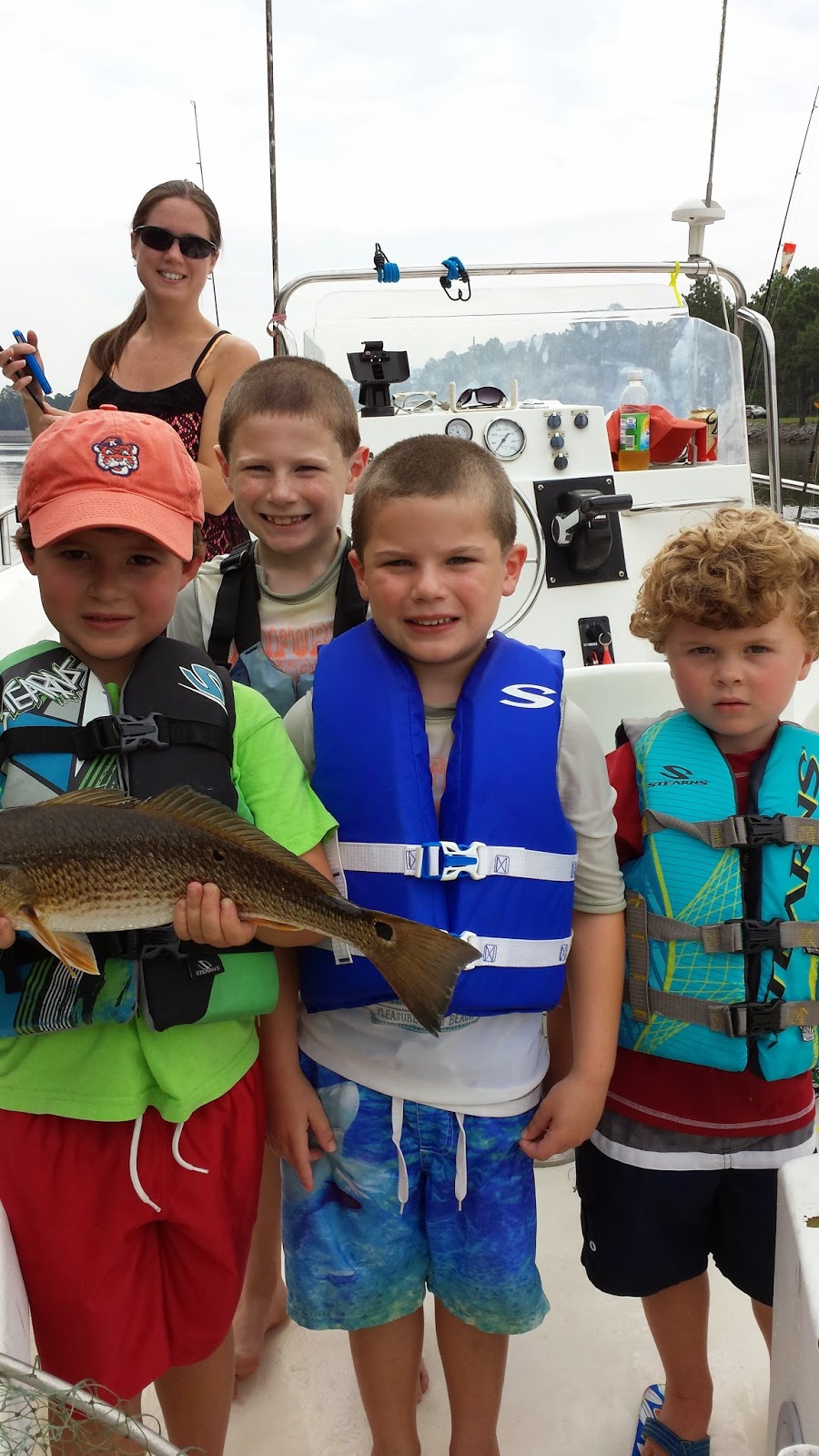 Then Sawyer got a big bite! We could tell it was a big one from the way the pole was bending. We had to hold part of the pole while he reeled it in because it was so heavy! But Sawyer reeled that huge red fish in all by himself and was sooo proud! 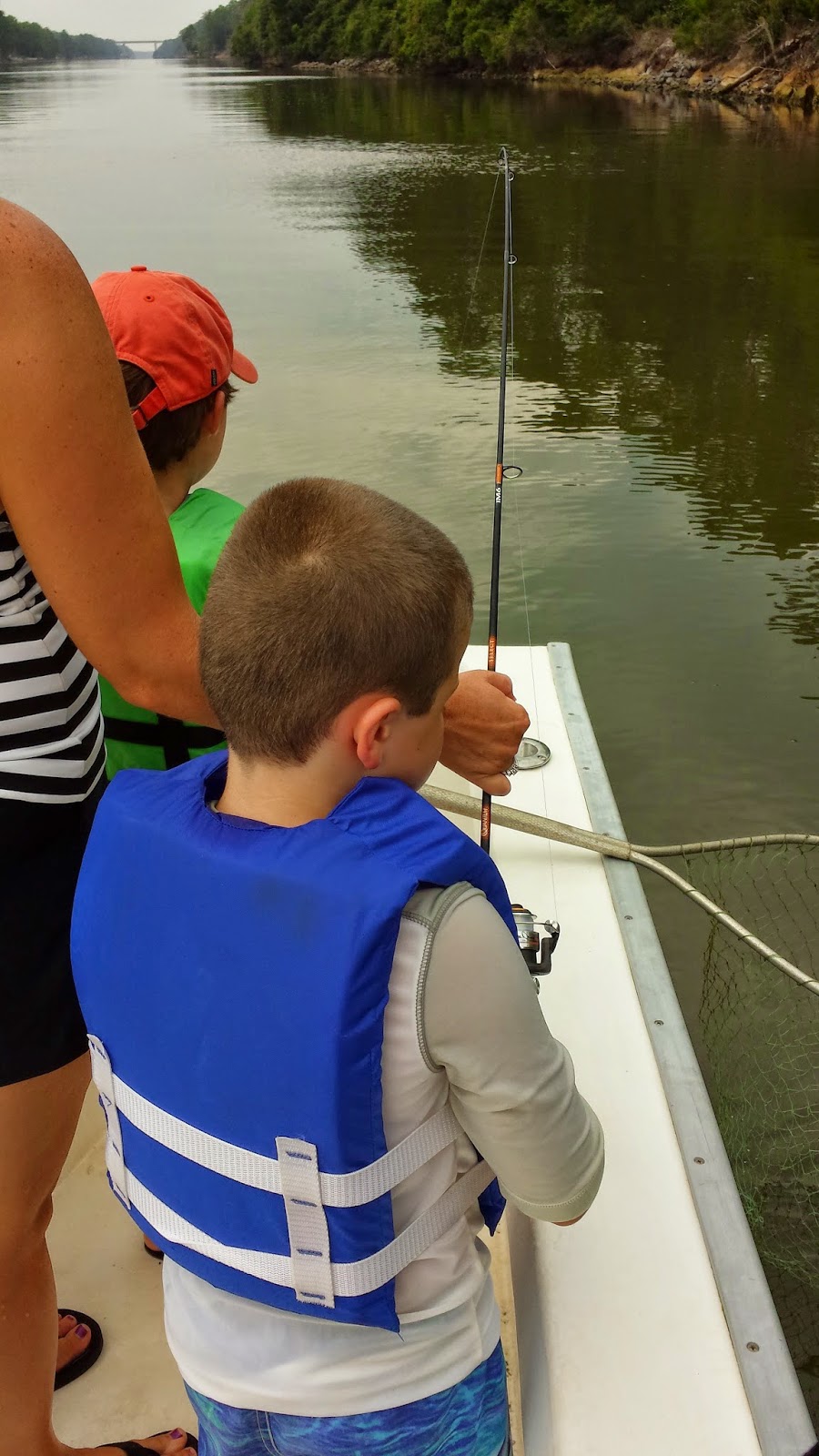 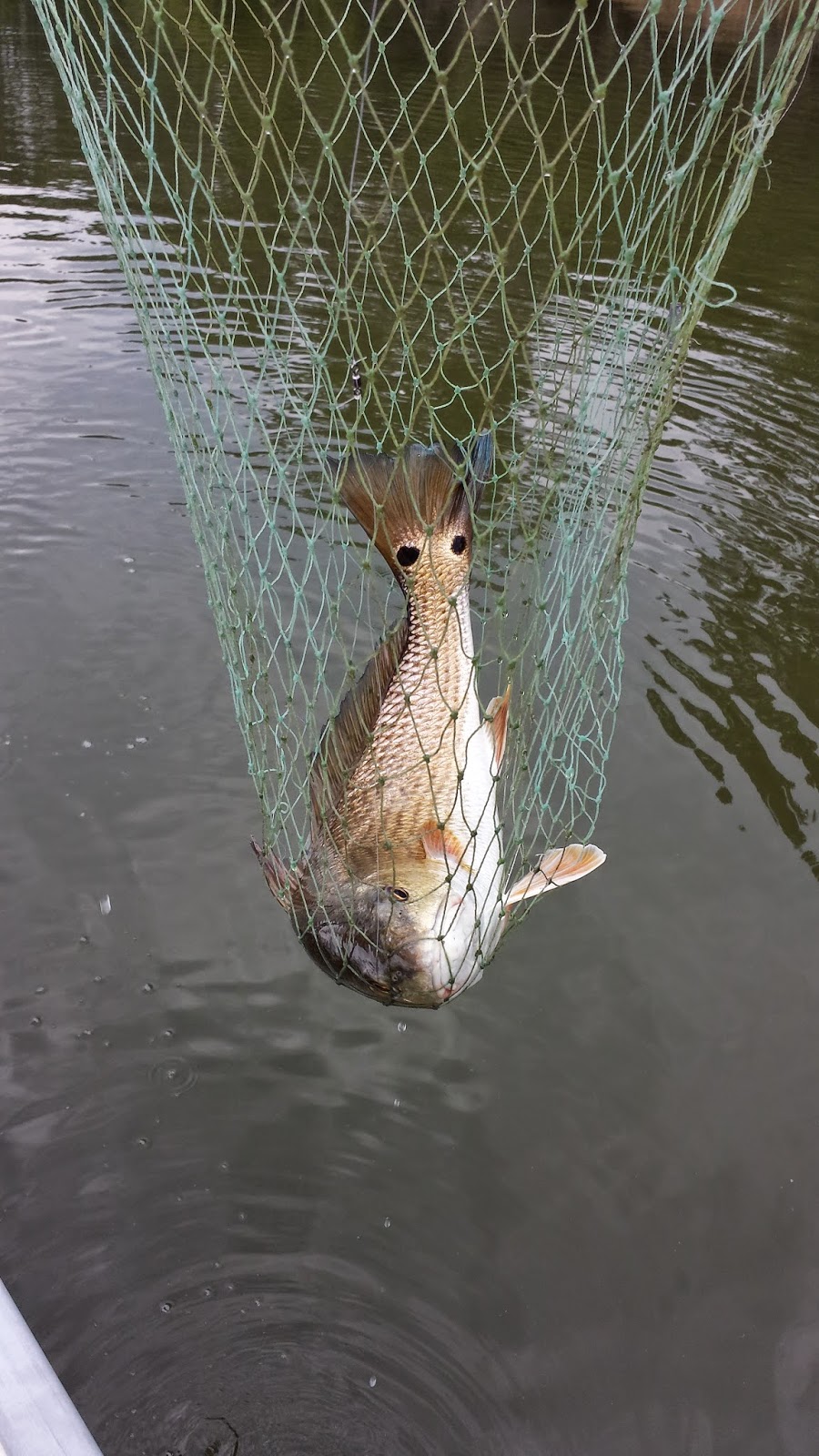 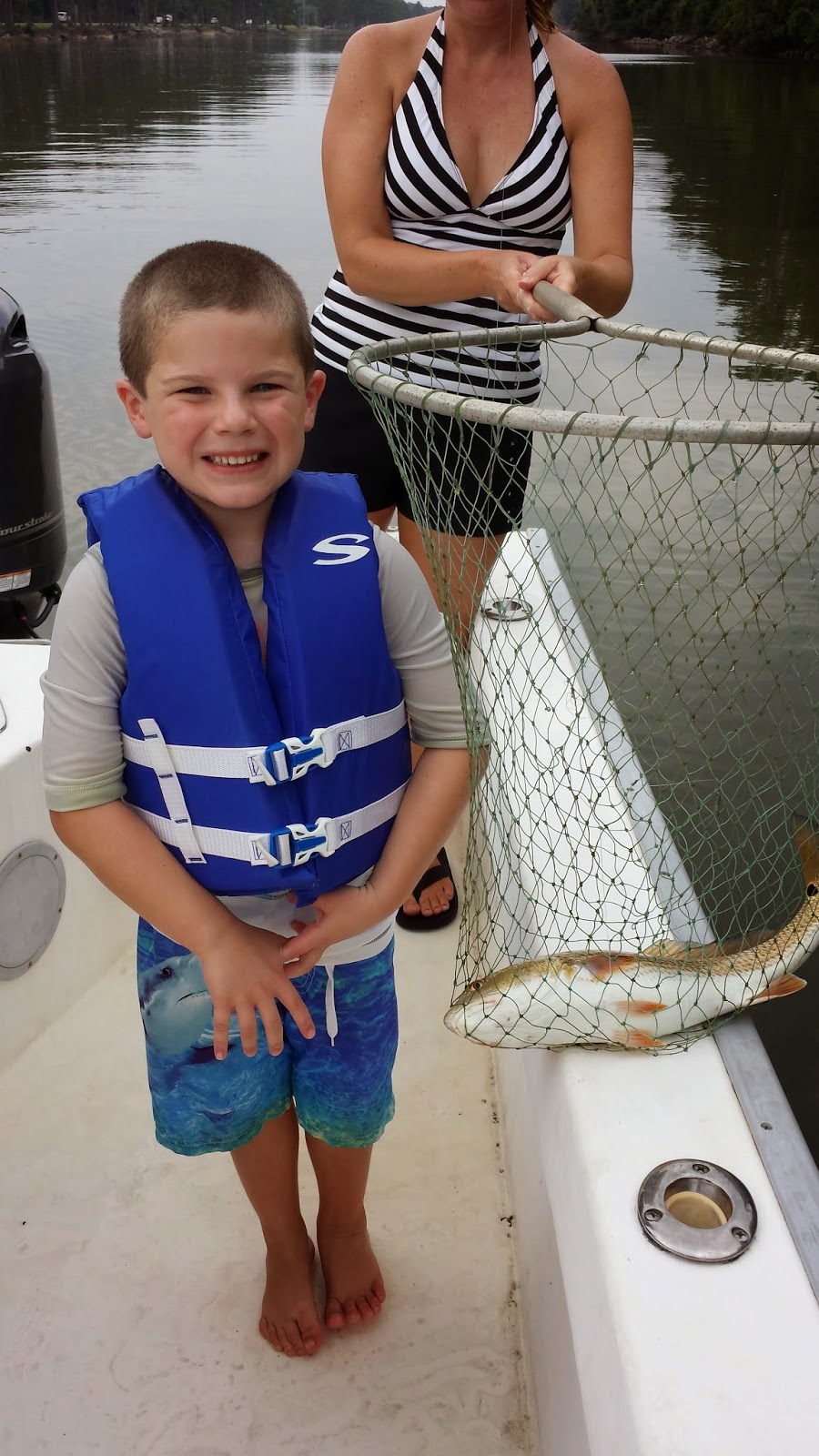 We even talked him into holding his fish (even though he kept saying the fish were creepy and were freaking him out lol)! 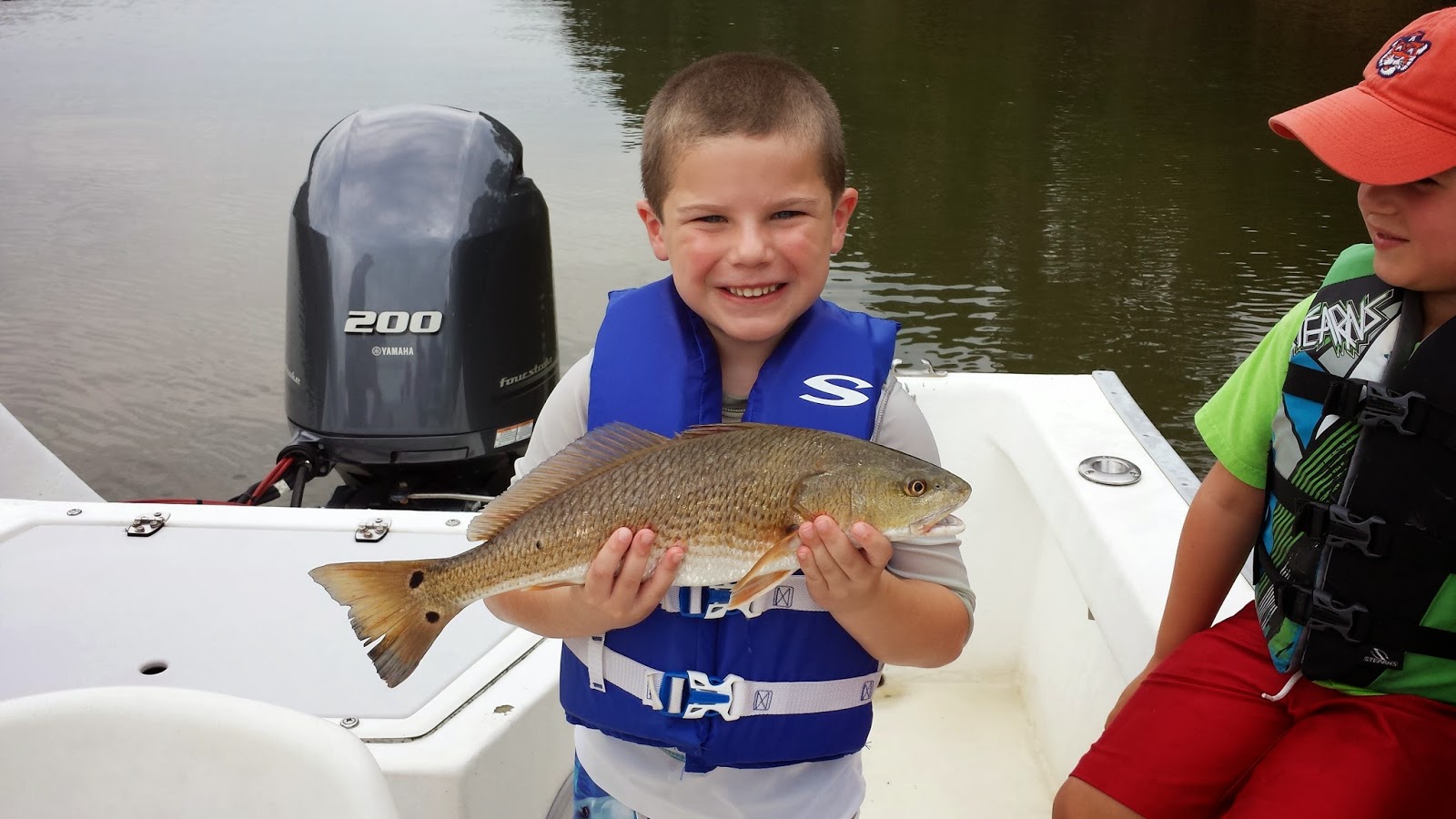 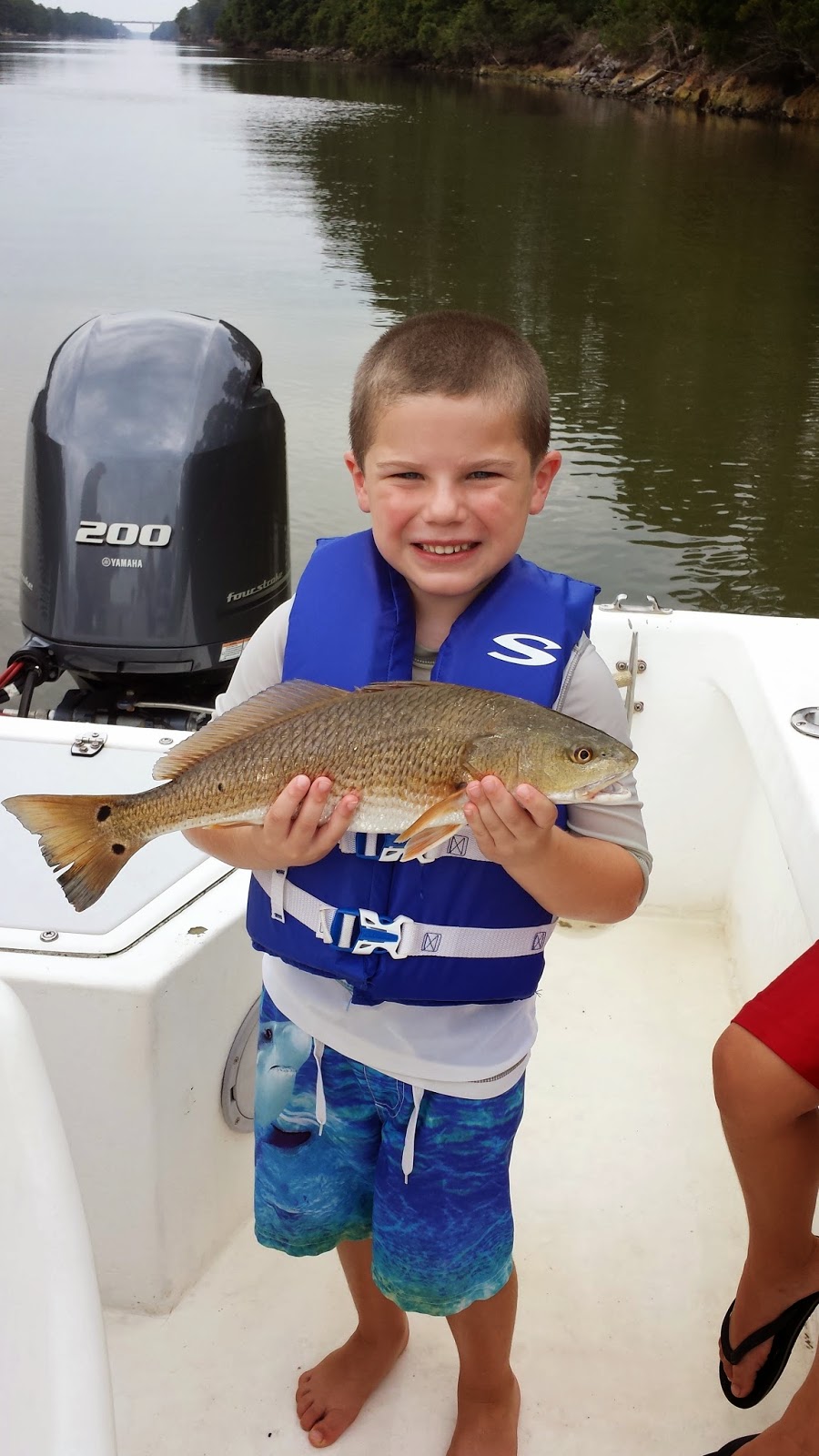 We caught a few more and then we took another boat ride! 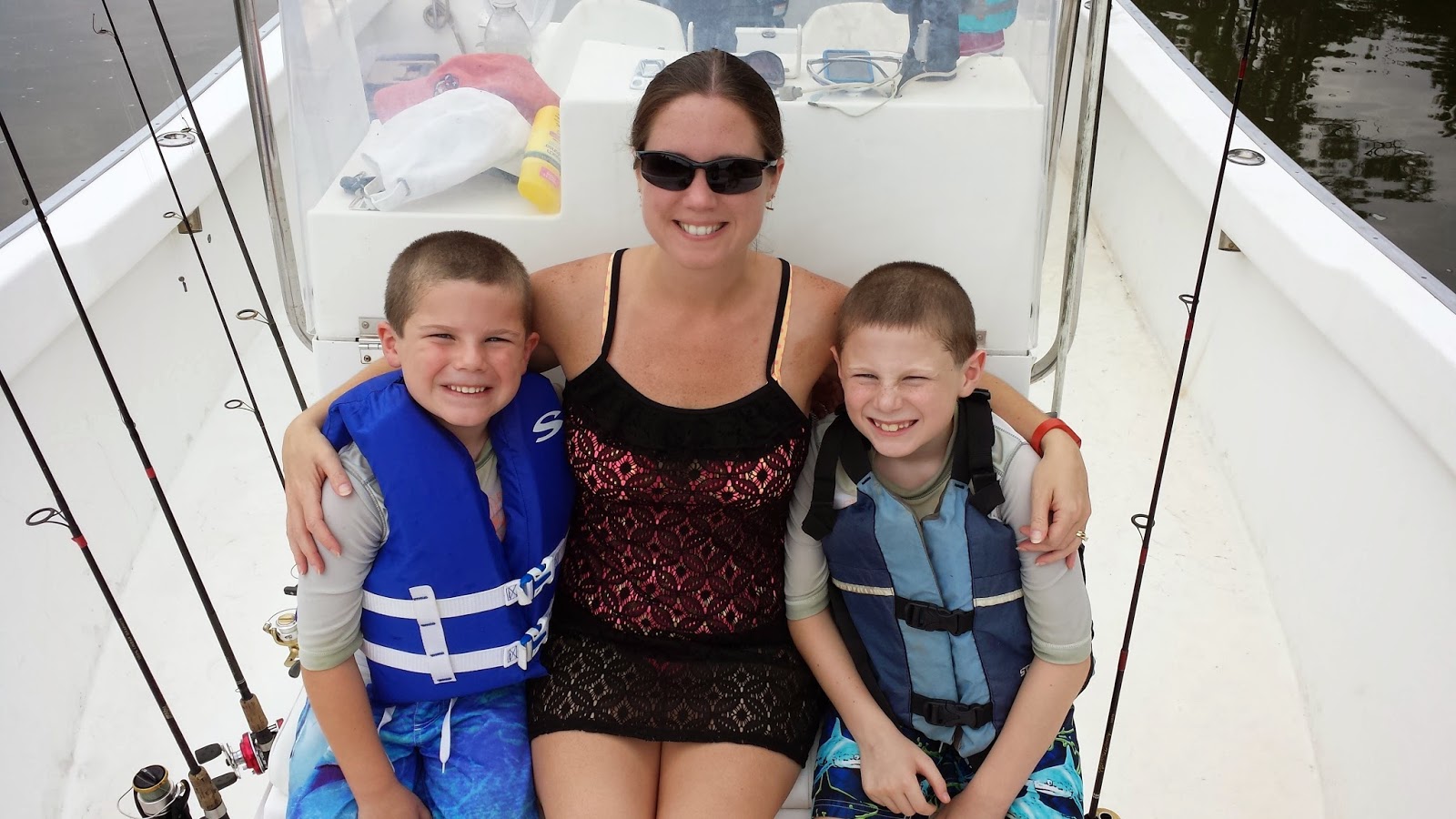 Sawyer even got to drive the boat! He was super proud of himself for this! Hayden (my cautious one) didn't want to drive. ;-) 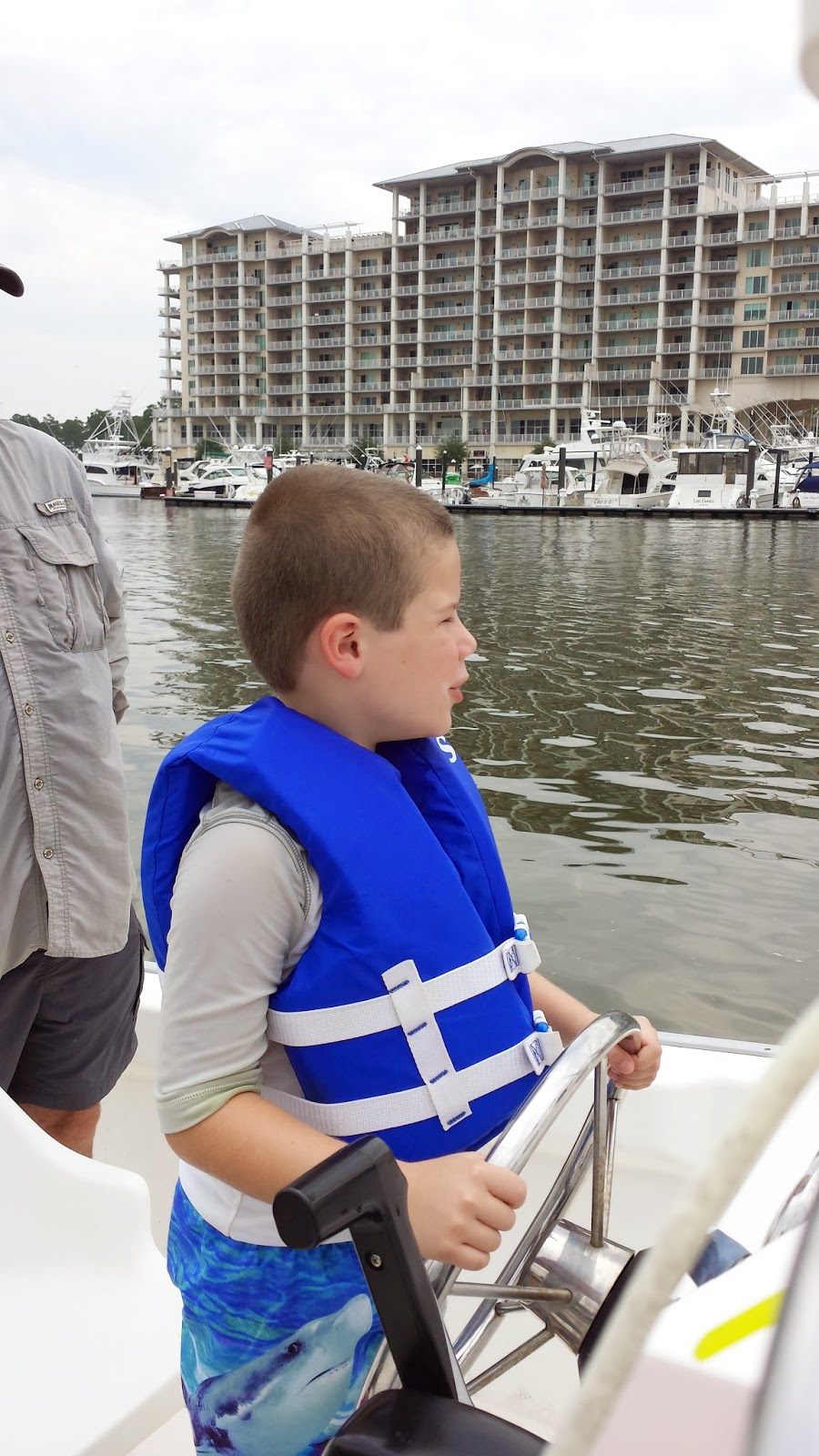 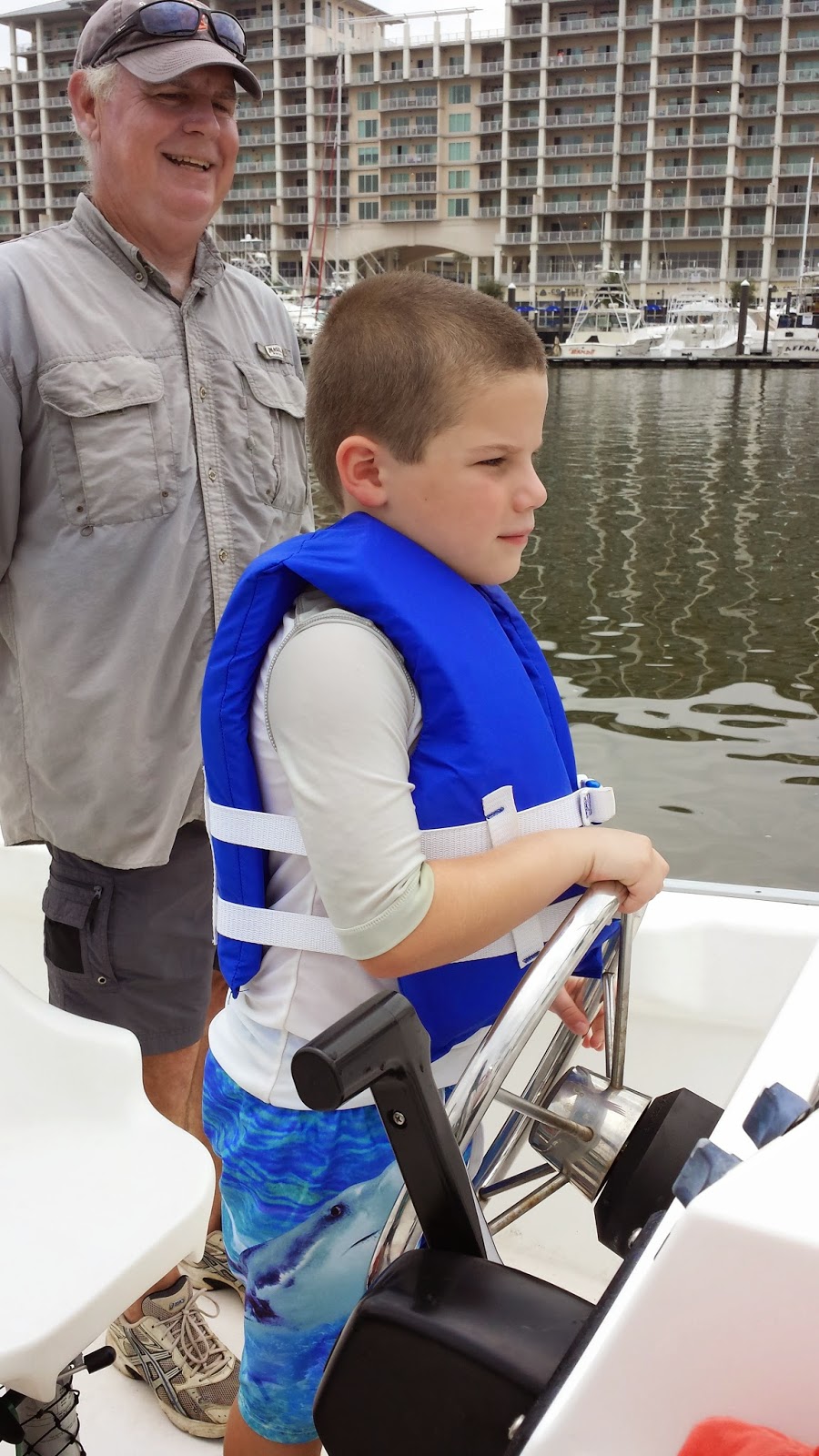 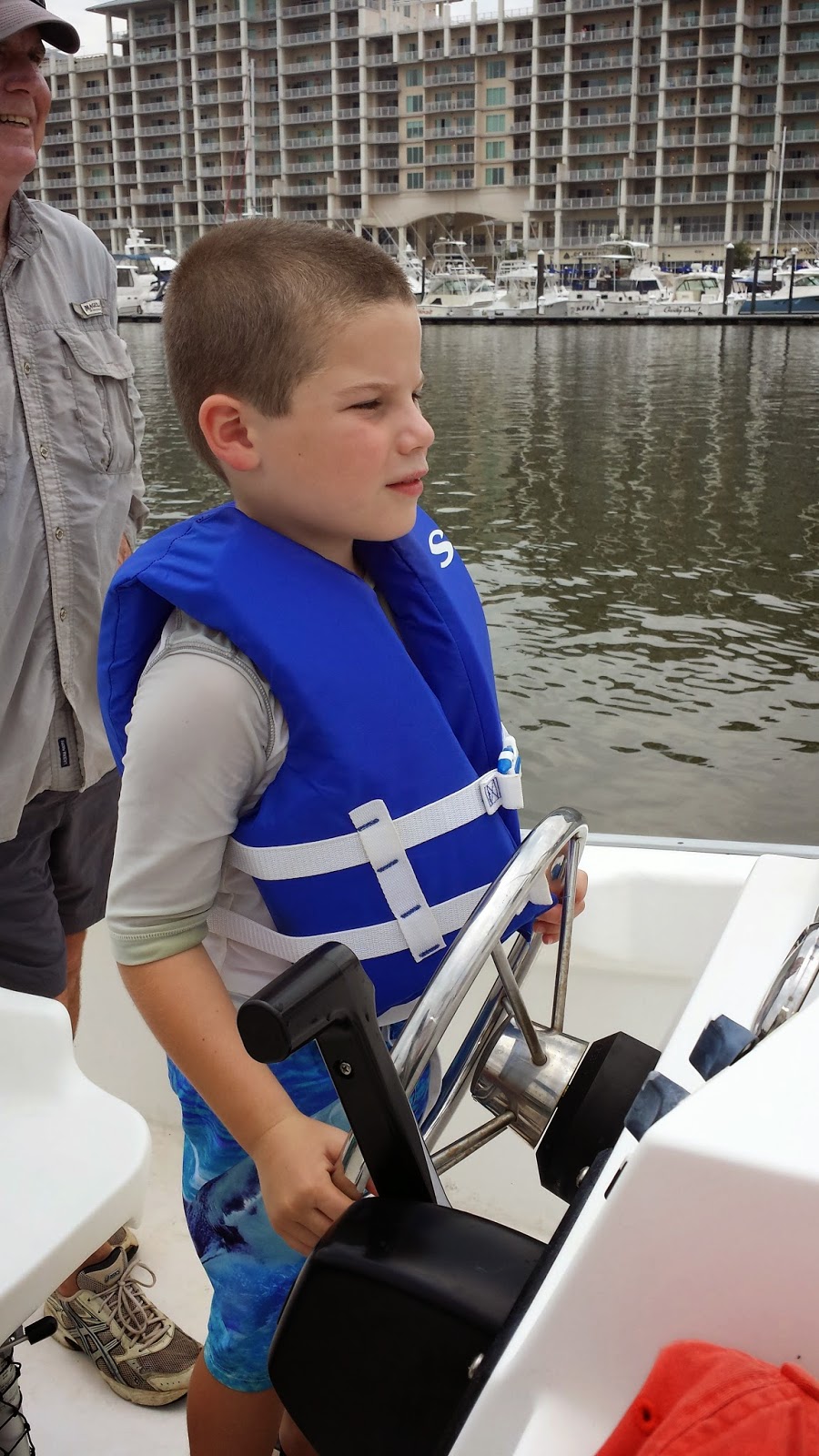 After the boat ride we docked back at Lulu's and had some yummy lunch! I chose wisely...blackened fish with veggies! ;-)

We had such a fun day! My boys LOVED fishing and want to do it again! Thanks so much for inviting us Melissa, Bryce, Aiden, and Mr. Kearley!!!