This week 9 miles was on the schedule! Due to my calf strain injury I had to ease slowly back into training. Because of this I don't have enough time to run a 12 mile run then taper. In fact, I don't even have enough time to taper! Rock 'n' Roll New Orleans is in a week and a half!!!! My last long run will be 10 miles and then the next weekend will be the half marathon. I think my body will be ok with this schedule since I'm not a new runner and this will be my 26th half marathon! At least that's what I'm hoping for!

Andria and I decided to run on our own this week. We opted to run our favorite downtown route. But because we would be running further out...that meant more hills! It's good training for us though since the New Orleans course is flat.

We woke up to this weather: 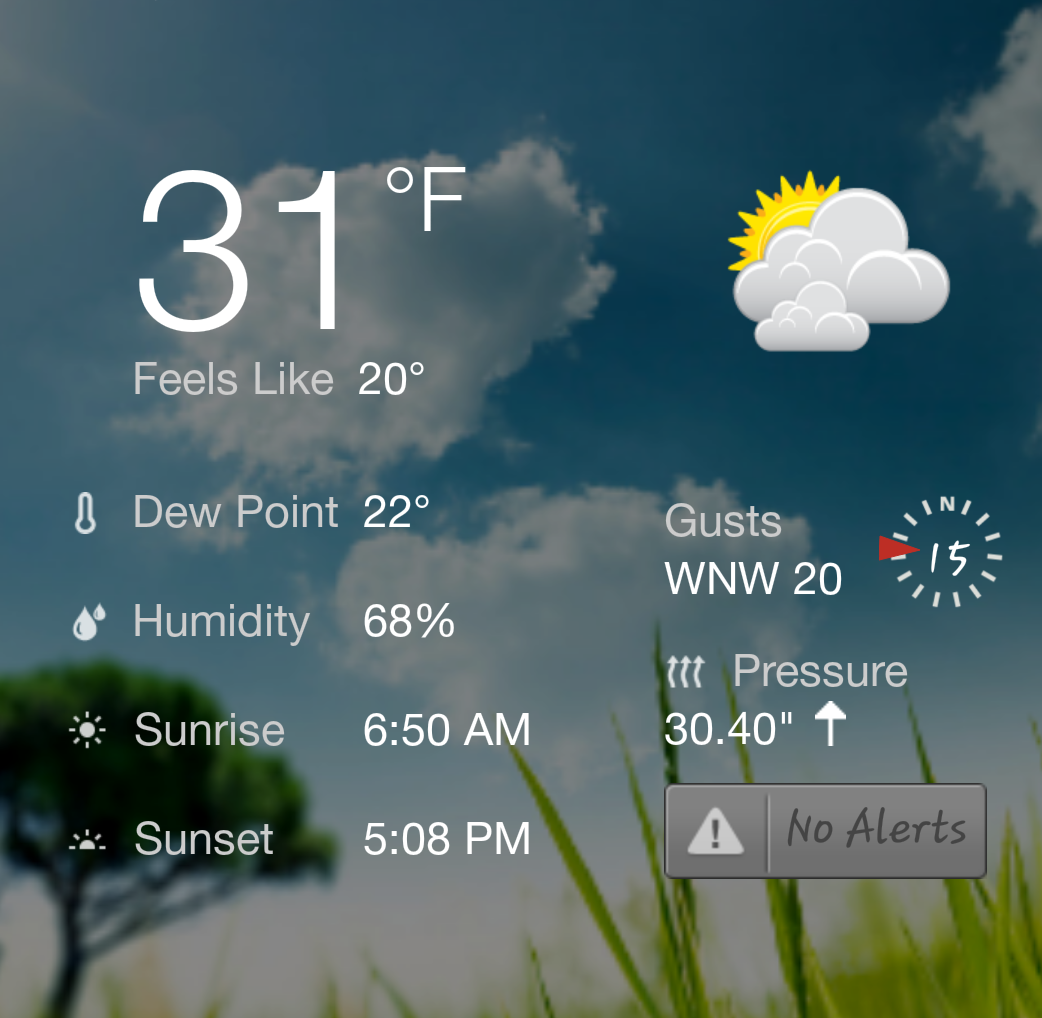 In case you are wondering...temps in the 30's don't happen often here on the Gulf Coast. And when the feels like temp is in the 20's we think we will freeze to death! So I wasn't really excited about running 9 miles in this weather. Add hills and wind to that mix and I was feeling pretty overwhelmed before the run!

But I made sure to wear layers. I had on warm compression socks, my warm Prana running tights, a long sleeve fleece lined base layer, a fleece lined jacket top layer, a fleece hat, gloves, and a scarf. Now why did I wear a scarf to run in? Because I was trying to find a way to cover my nose! The few days before it was really cold and breathing in the cold air actually hurt! And I was only running a mile! I knew 9 miles of that would be torture. But...the scarf didn't work very well. It wouldn't stay up to cover my nose. I'd have to hold it there for a few seconds to get some relief from the cold air. And the scarf flapped the entire run. So I've gotta find another option for these really cold run days!

The beginning of our run we were rewarded with a gorgeous sunrise! 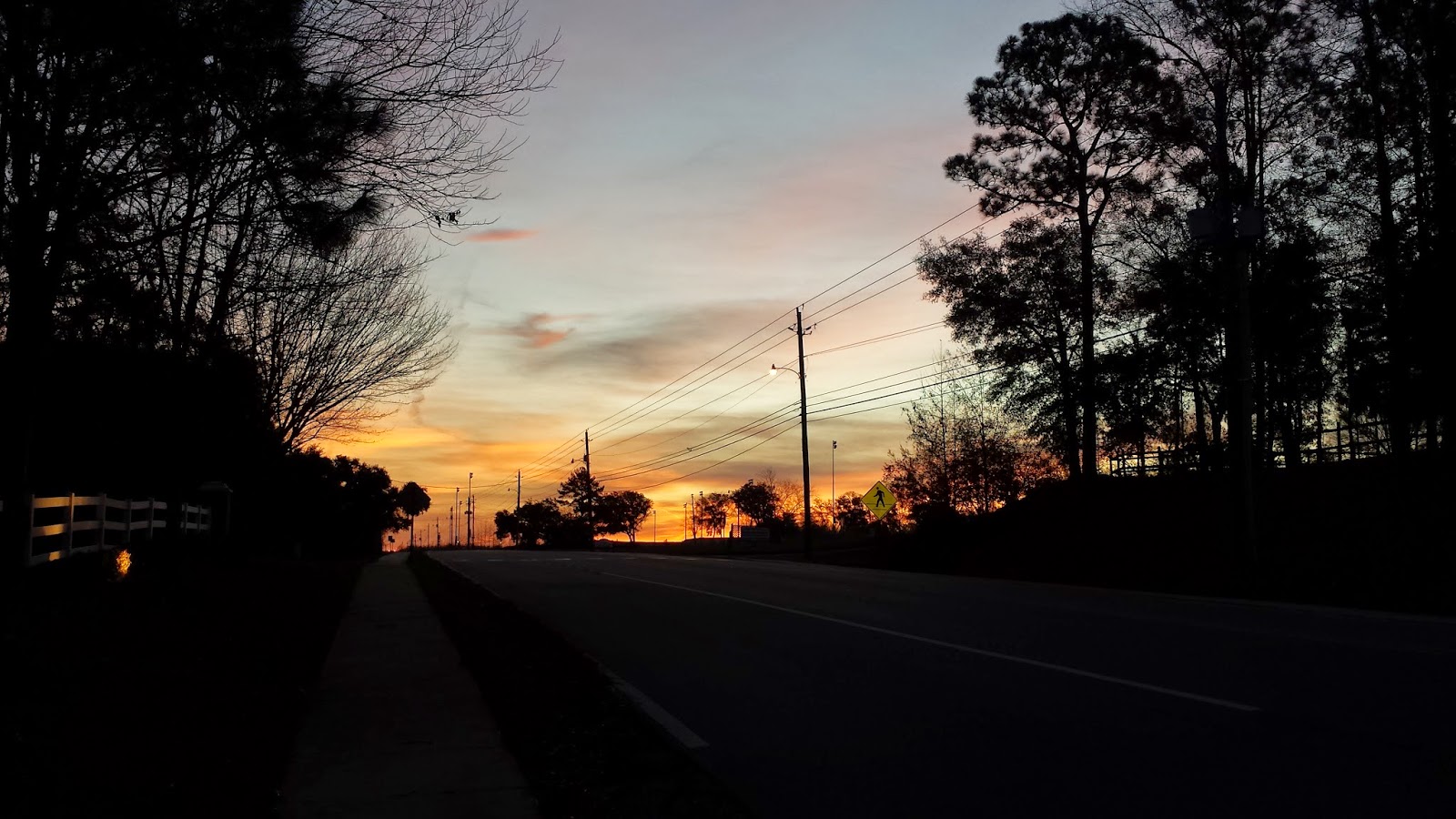 A view like that always motivates me to get started! The run started out very cold. But by the time we got to mile 2 I was starting to warm up! Other than being cold I was feeling great! Before I knew it we had reached mile 3 and our first water stop! 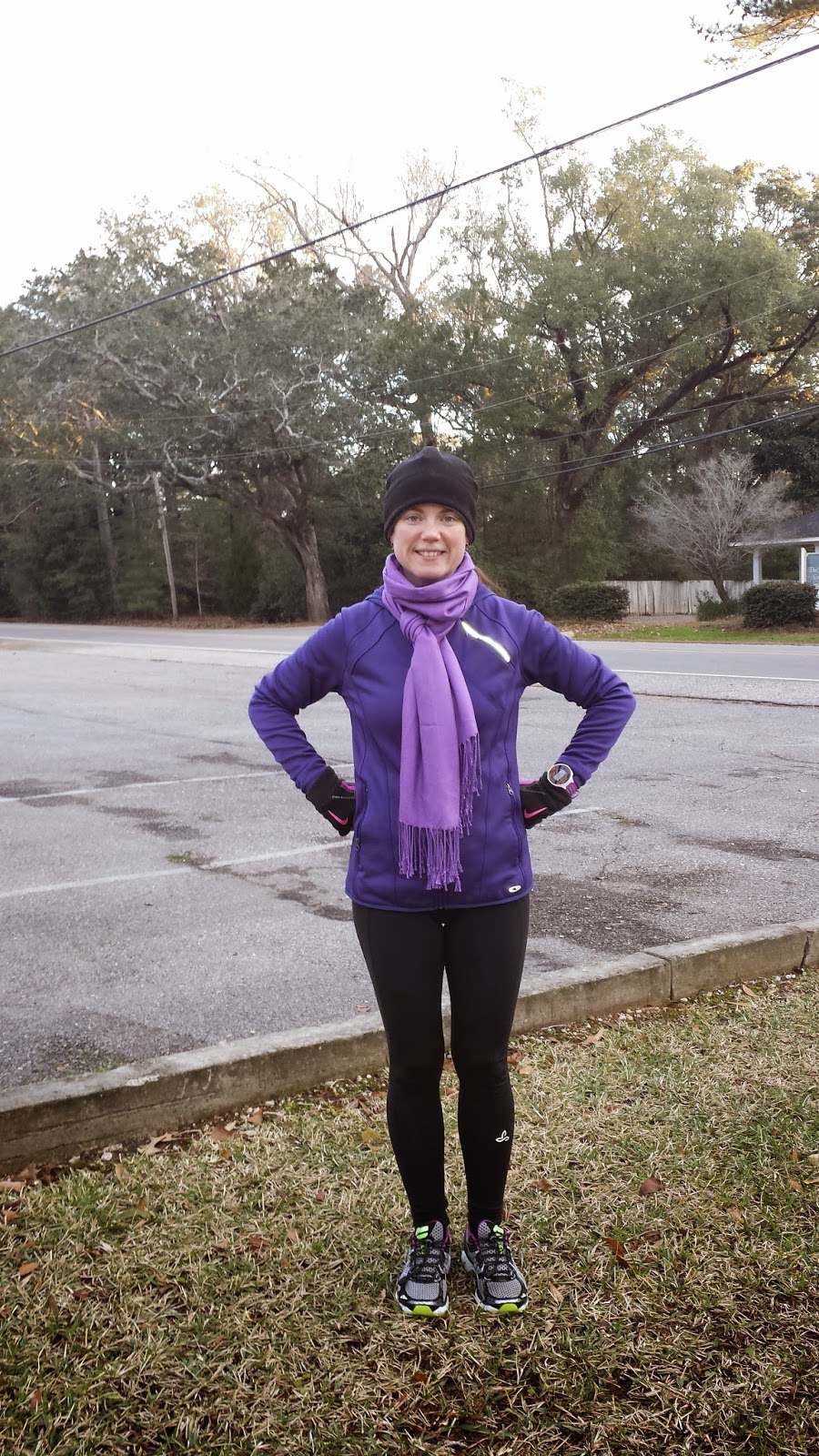 After some water we started running again. But that meant the hills were coming! We didn't notice them as much at first. But then we had to turn around and run back. And that's when the hills were brutal! Not only were we running hills but now we had to run against the super chilly wind! Brrrr! Finally we reached mile 6 and our second water stop.

We drank fast because it was too cold to stop for long! We only had 3 more miles to go! By this time my hands were tingling and my face felt numb. But I wasn't about to quit. The last 2 miles of this route Andria and I were quiet. The sidewalk is very narrow and we had to run in single file. Then we turned onto a different road that has no sidewalk. By this time the traffic had picked up so we were running single file AND watching for cars. It was a little nerve wracking. But then we finally hit the sidewalk with about a mile to go. We both were still pretty quiet because we were trying to focus and finish strong! And....the fact that we were frozen at this point probably didn't help lol! 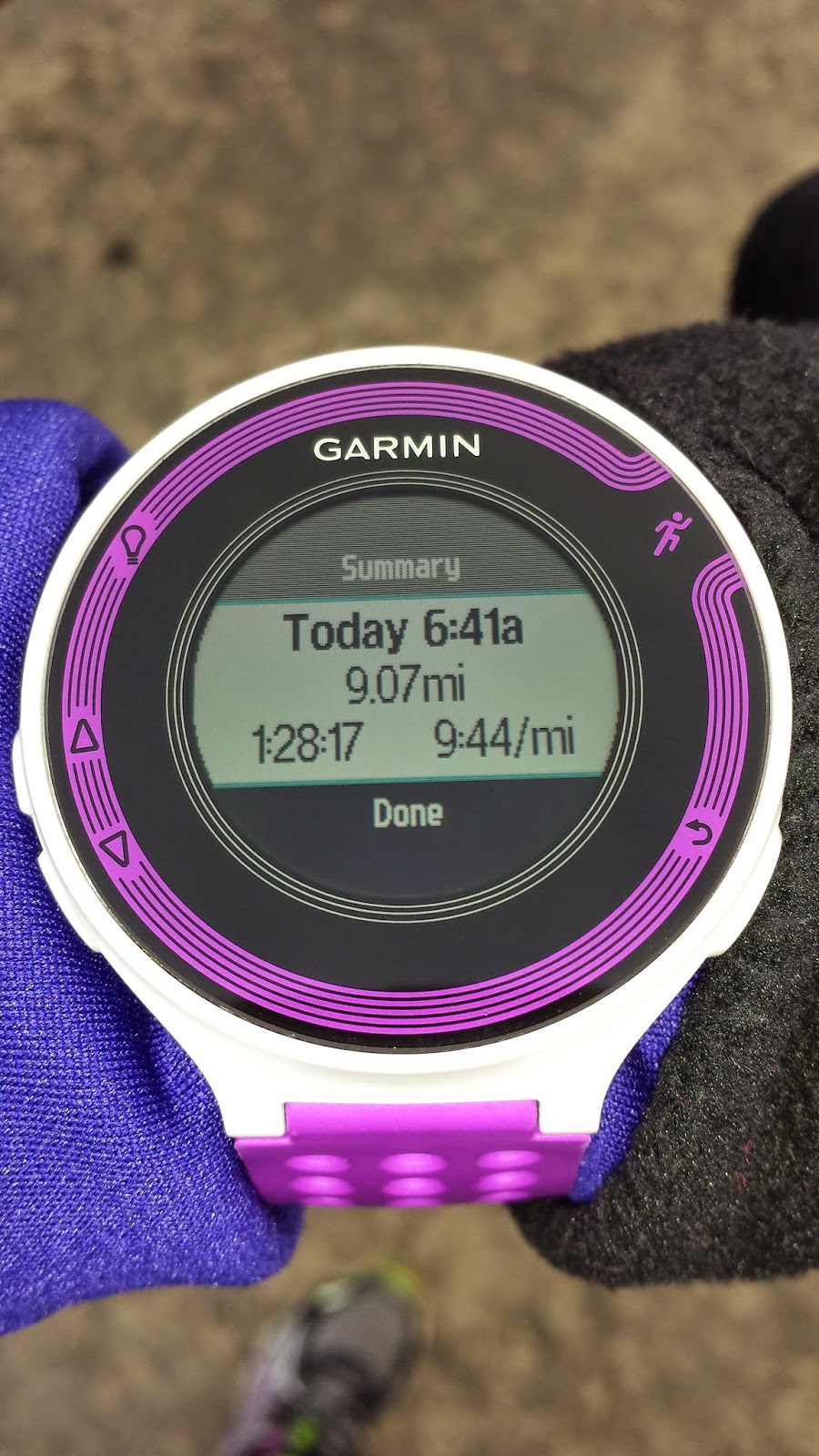 And of course my new Garmin rewarded me with another record! :-) 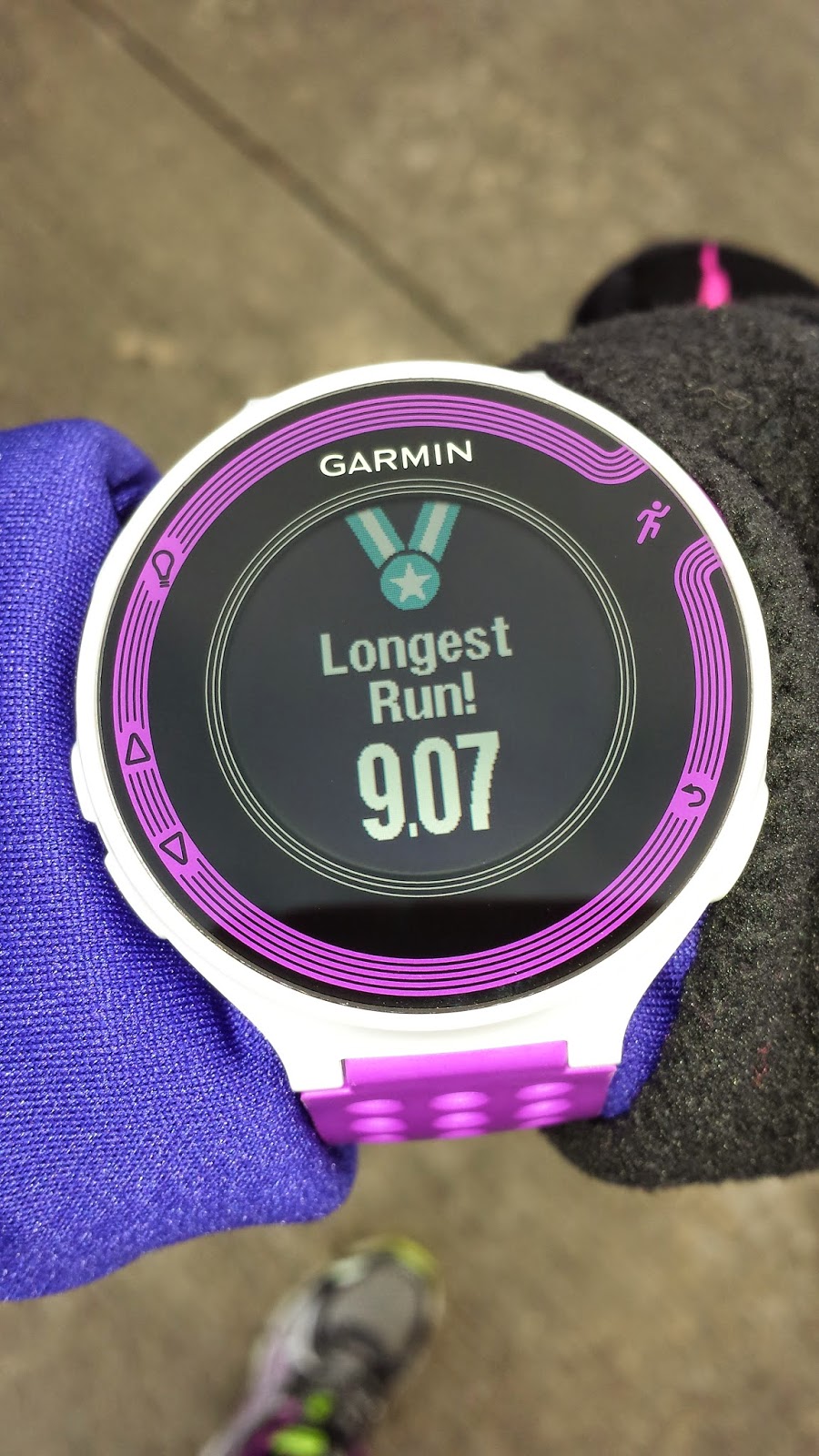 It was a great run! I was so glad Andria decided to run in the freezing cold weather with me! I'm not sure I would have made it on my own! 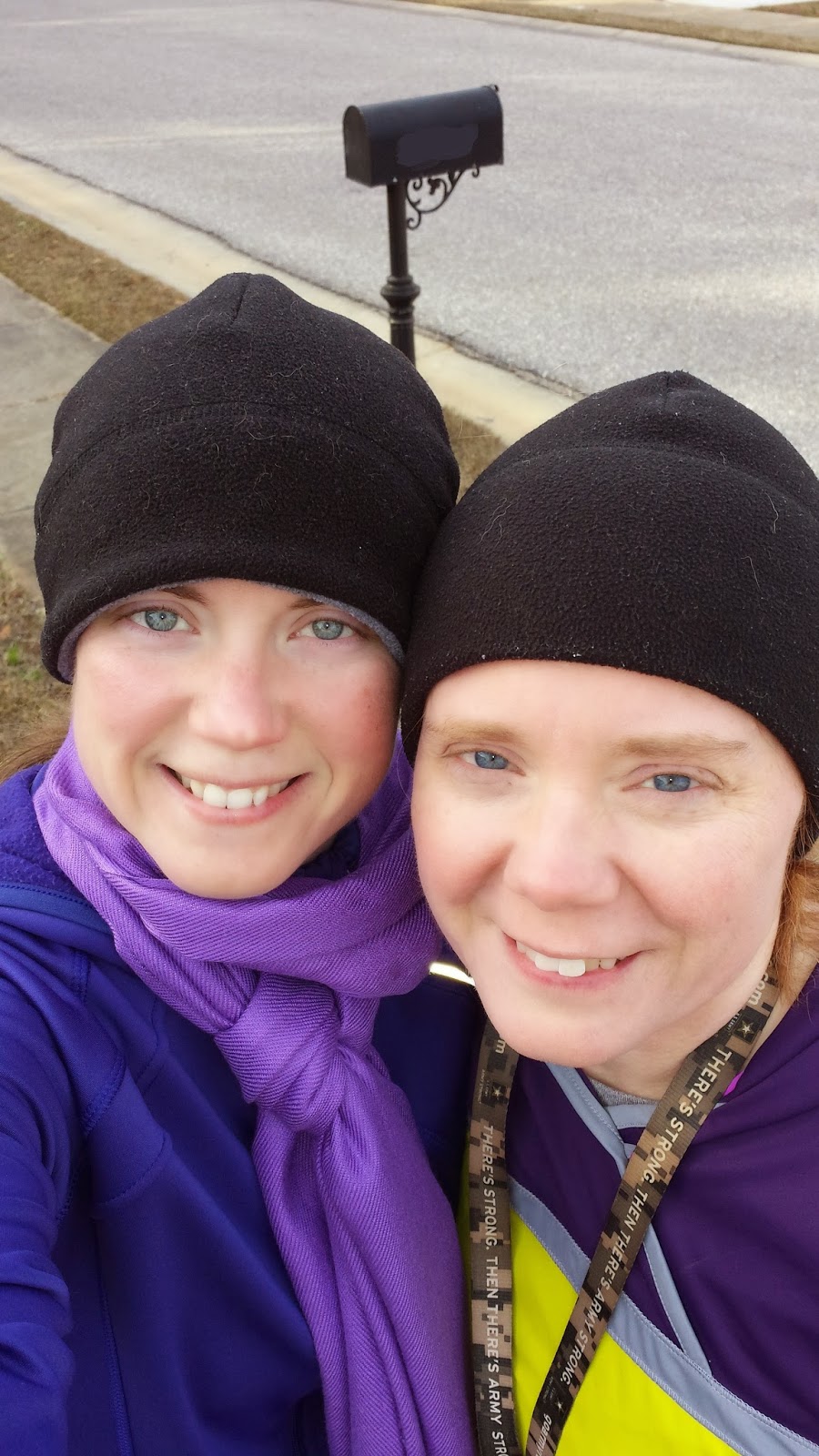 After the run it took me about 4 hours to warm up lol! I was soooo cold!

QOTD: What are your tips for running in the cold weather?