This weekend we went on a family campout with the Cub Scouts! I wasn't too sure about this...sleeping in a tent and no place to plug in my blow dryer and flat iron??? Ugh no thanks! But for my boys I will do just about anything...so I agreed to go. And yes...the weekend totally surprised me! I had a BLAST!!! And so did my boys!!! :-) Here's the rundown of our weekend! There will be tons of pictures in this post...hope you don't mind! :-)

My sweet boys posing for me when we arrived at the campsite! 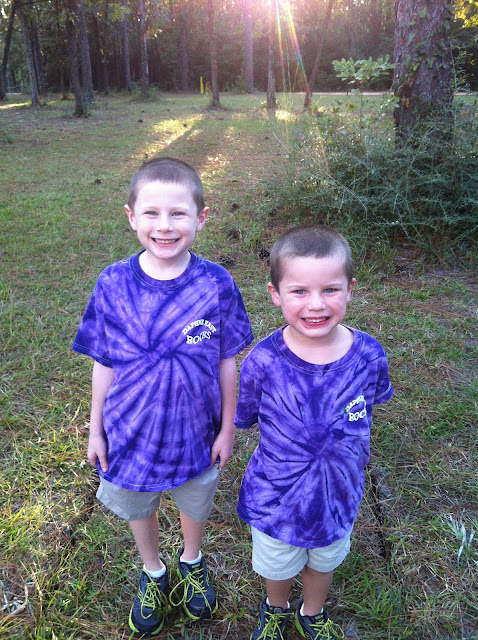 They had so much fun helping Daddy set up the tent! 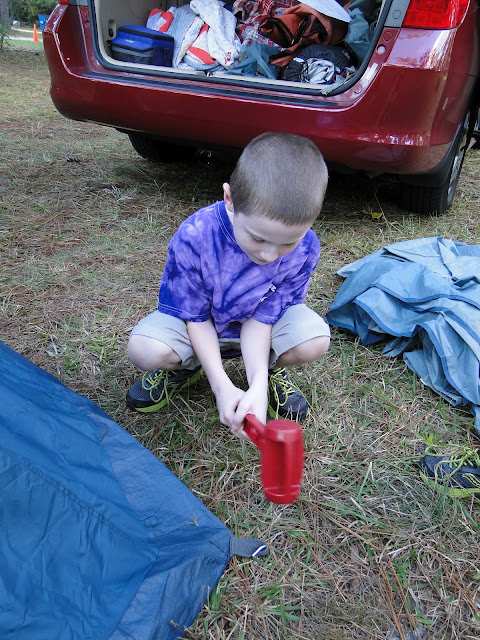 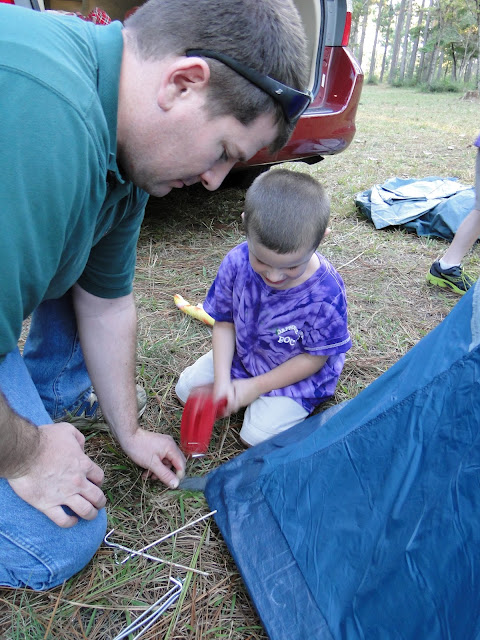 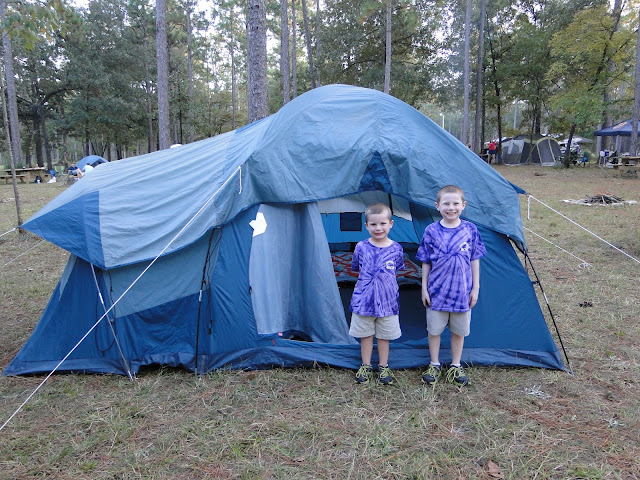 After the tent was all set up the boys had a blast playing in there and reading books!!! They were super excited about the tent!!! 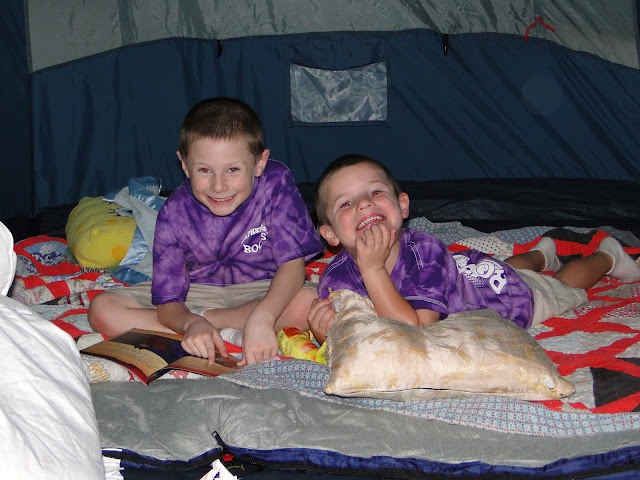 Friday night there weren't any schedule activities. It was just a night to get your campsite set up and to do what you wanted. The boys had fun playing with some of the other kids and Andy and I had fun visiting with the other parents! We sat around the campfire and talked! The boys LOVED the campfire! 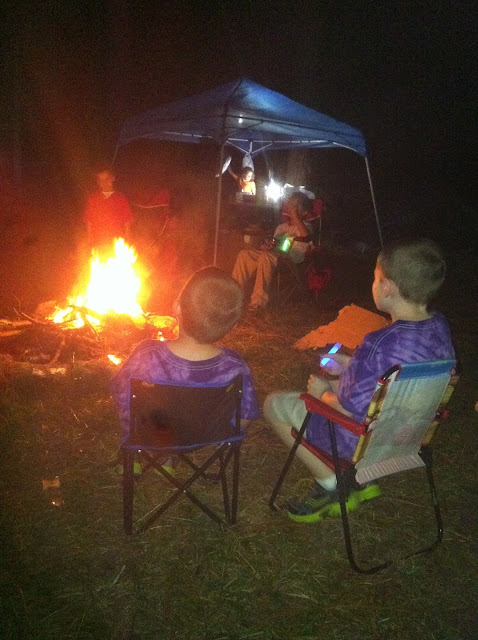 The first night in the tent...I didn't sleep very well. I would doze off and then wake up. I would get hot so I would kick off my covers...and then I would be freezing!!! It was also very humid that night and we could hear drops of dew falling on our tent throughout the night. Not to mention the animals sounds we heard...crickets chirping and this clicking noise which drove me nuts!!! We learned the next day that the clicking noise was actually beetles eating the bark on the trees.

We woke up the next morning and it seemed like the boys slept good. While we waited on breakfast (each den had a turn in preparing a meal throughout the weekend) Hayden helped gather firewood for that night's campfire. They had a blast finding these huge limbs and cutting them up for firewood! 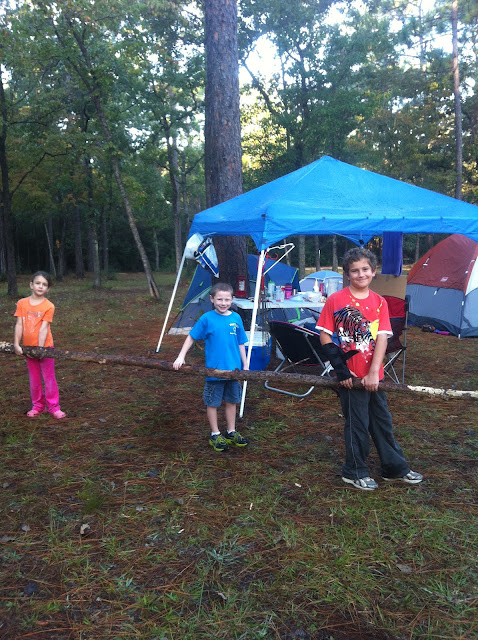 After breakfast (pancakes and sausage) it was time for the scouts to race their Rain Gutter Regata boats that they had been working so hard on. They each got to race at least 2 times...sometimes more depending on if they won their heat. Hayden did so good with his! He raced 3 times...but only won 1 out of the 3 heats. But he was ok with that...he had fun! 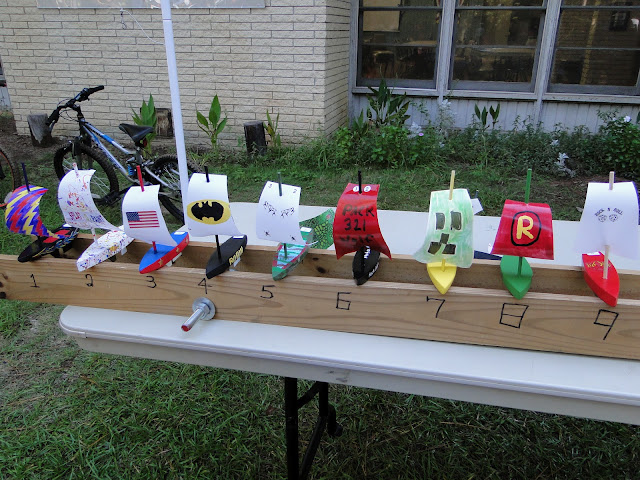 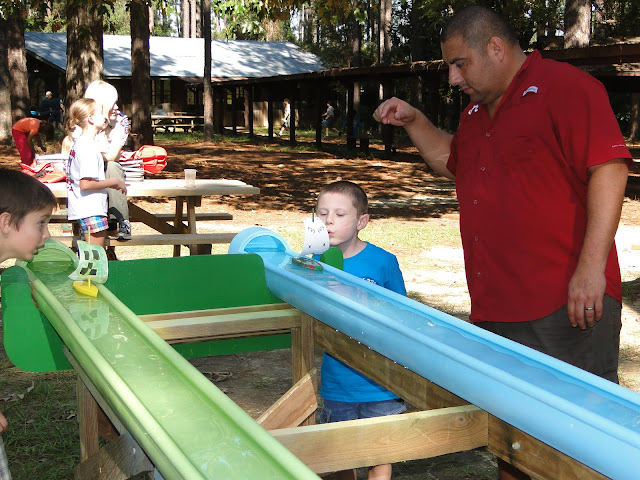 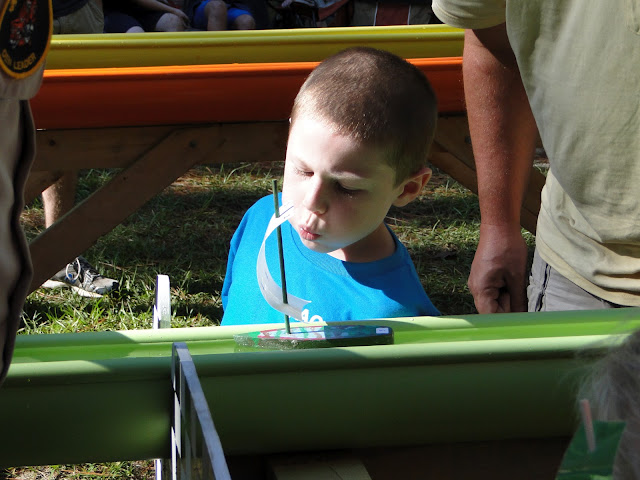 After the races we had lunch (grilled cheese or PB&J sandwiches, chips, and carrots and celery) which the Wolf Den (Hayden's Den and the Den my hubby is the leader of) had to prepare. It was fun watching the boys get excited about helping make a meal!

After lunch we had the awards ceremony for the races....Hayden's boat didn't win but he DID win a ribbon! He won 3rd place for the Best Scout Design for his boat! His boat was named "The Nature Boat" and he put wolves and insects on the sail. He was so proud of winning that ribbon!!! 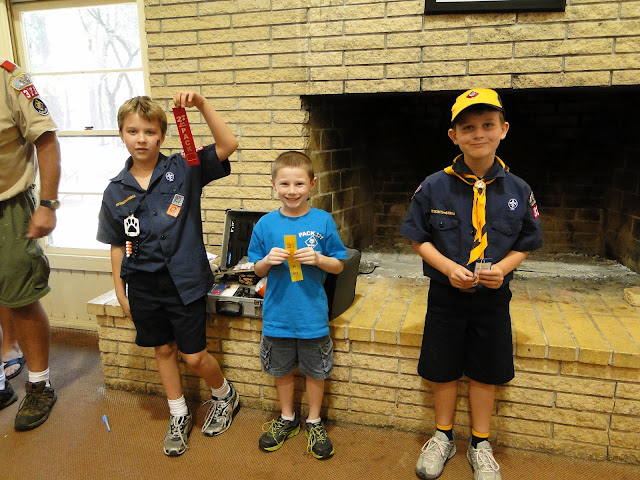 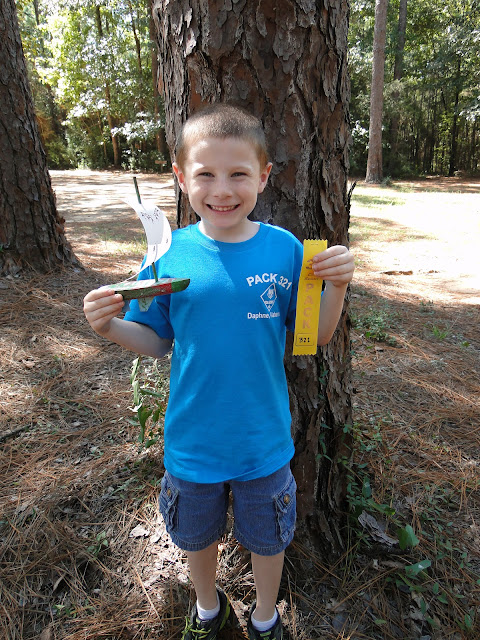 After the awards ceremony we were on our own until dinner. Our pack went on a nature hike through the woods! 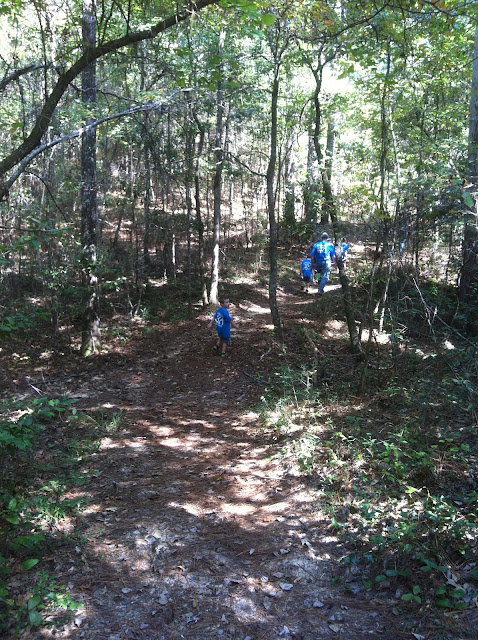 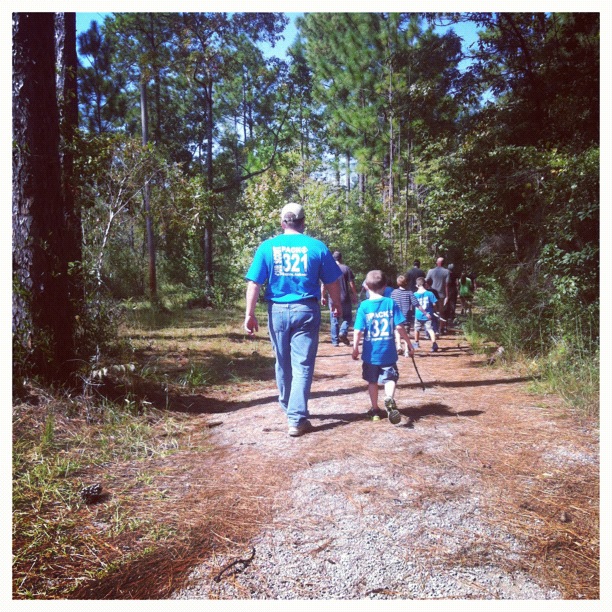 After the hike the boys played all afternoon until dinner. They climbed under the bell, climbed trees, built a fort out of pine straw! You know...just boy stuff! :-) 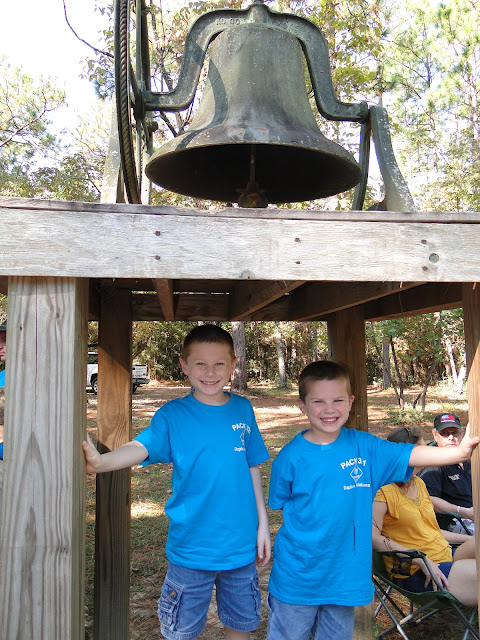 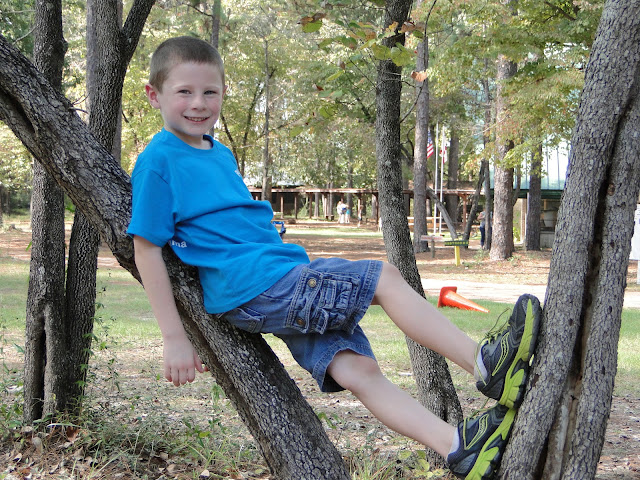 For dinner we had tacos...the boys ate tacos like I've never seen before! All that playing made them hungry!!!

After dinner we had a bonfire and held the pack meeting. Each den had to perform a song, stunt, or skit. Hayden's wolf den did the emergency broadcast system...they howled like wolves. 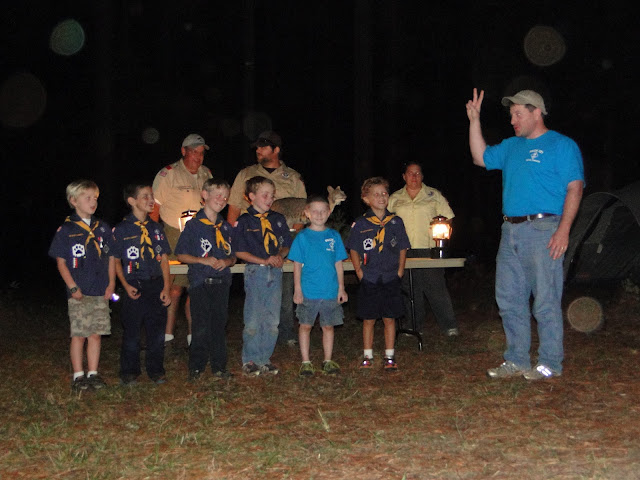 Then in the case of an emergency...they all screamed and went wild!!! It was super cute and the boys loved it!!! 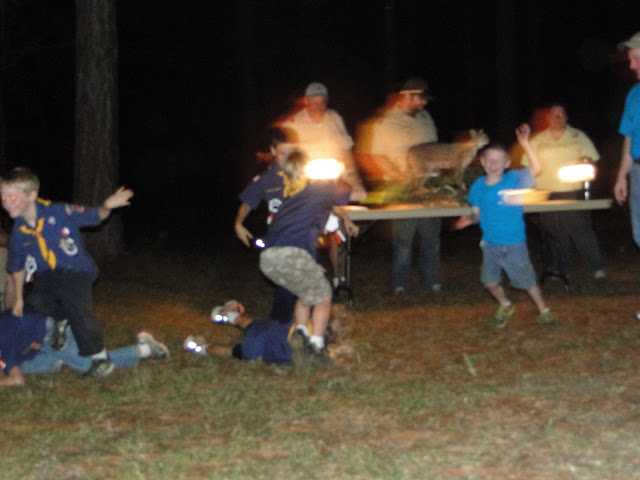 After the performances it was time for those that had earned badges to receive them. Hayden earned his bobcat badge! But first there was a little initiation so to speak. 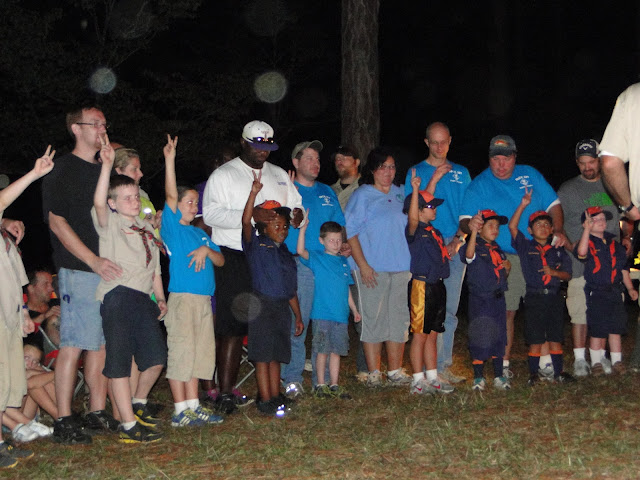 They had to drink "bobcat blood!" I asked the Webelos scouts (who were older) next to me what it consisted of...they told me it was V8 juice and pickle juice! I immediately thought...Hayden is NOT going to do that! But Andy told me he said, "Daddy I want to drink it." And he was brave and drank it all!!!! 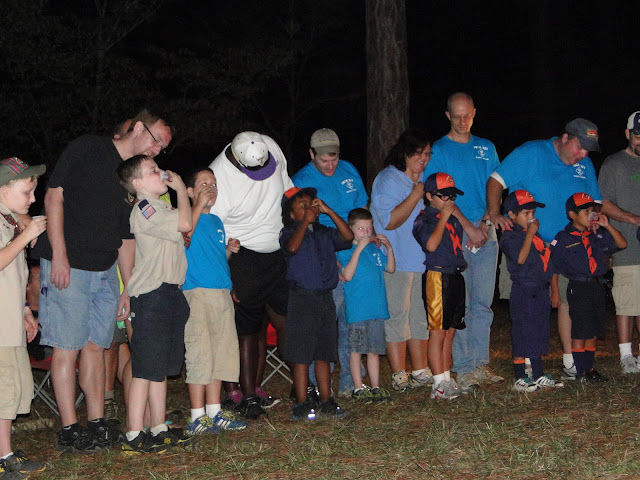 After he drank the bobcat blood, Andy had to hold him upside down while I pinned his badge onto his shirt...supposedly the badge has to be upside down until it is sewn onto his cub scouts shirt.

After the bonfire we had smores in the fire. We stayed up playing and talking around the campfire and then it was time for bed. We were all super tired! That night all four of us slept great! The weather turned cooler that night too so that helped I'm sure!

Here are my sleeping boys that last morning! 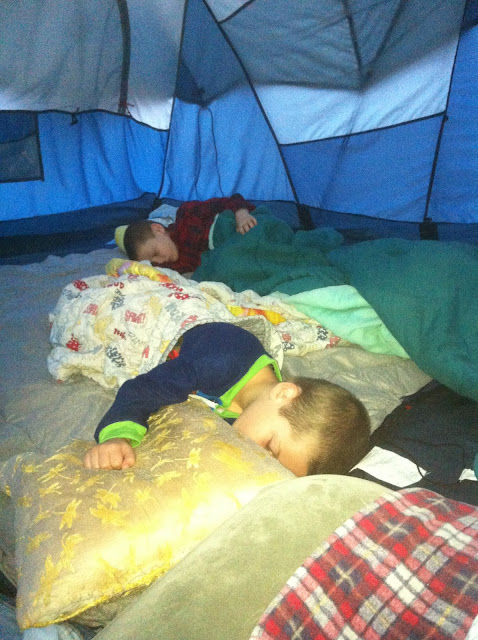 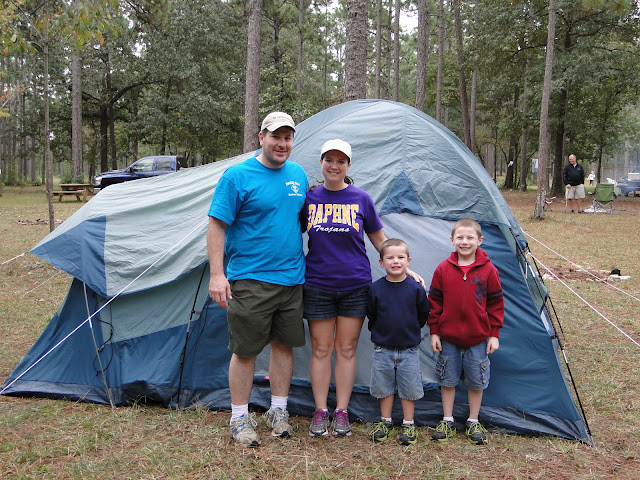 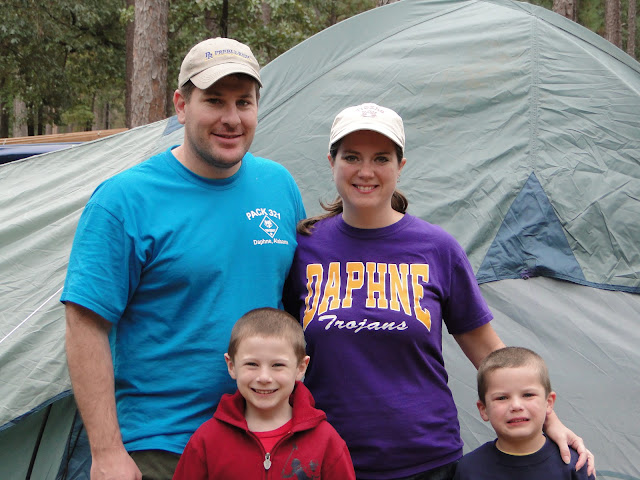 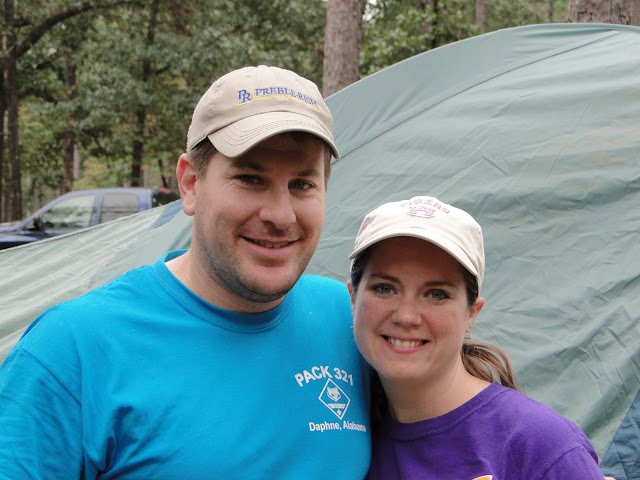 And one last picture....I just had to share one of Hayden all decked out in his Cub Scouts uniform!!! Sooo handsome!!! 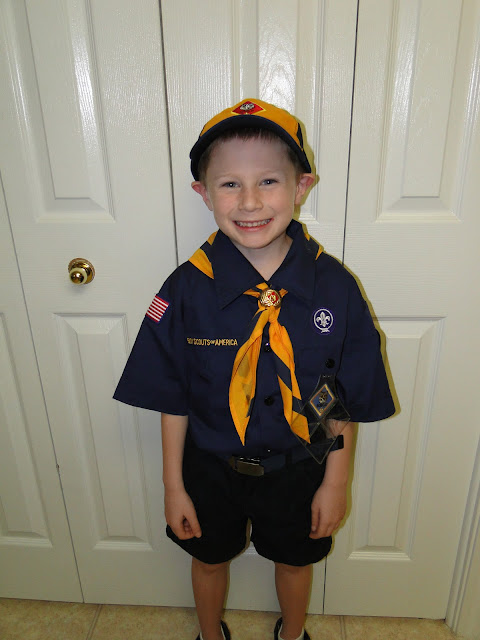 QOTD: Have you ever been camping? Do you like it or hate it?