It's About the Shirt Half Marathon!!!

Let me start by saying that this race will always be fond in my heart for two reasons. First...it is the first group of half marathon Sole2Soul Sisters that I've been the training leader for. I will always remember these awesome ladies and how they ROCKED this hard race!!! Second...my friend Stephanie ran this race...and she far exceeded her and my expectations!!! She did AWESOME!!!

So let's start at the beginning! If you missed it you can read about the race expo and packet pickup here. This race was the perfect race for Sole2Soul Sisters because it was local (only about 15 minutes away from my house) and it was for an awesome cause...Alabama Teen Challenge. Sole2Soul Sisters has run several races for Alabama Teen Challenge with our couch to 5K groups so it seemed like this was the perfect race for our first half marathon group.

I slept really well for the night before a race...I guess because I was in my own bed! I woke up excited and ready to run but nervous. It doesn't matter how many races I run I always get nervous before! I put on my race gear (and rain gear because I could hear the rain coming down when I woke up) that I had laid out the night before. I ate my normal long run breakfast...a waffle with peanut butter. But I couldn't finish the whole waffle...my tummy was just too nervous. My wonderful hubby woke up early to see how my very sore legs were feeling and to wish me luck! He's so sweet! He also took this picture for me! :-) 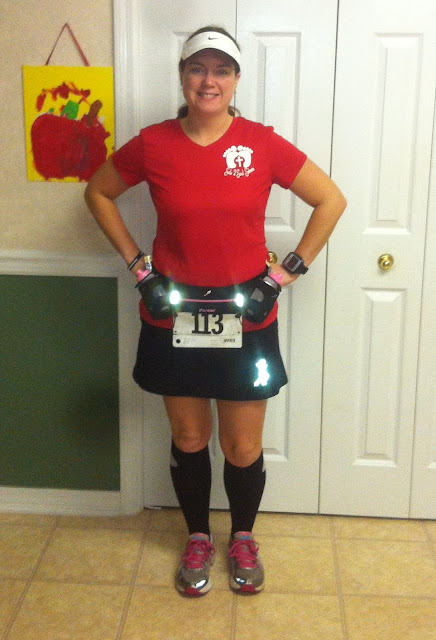 Stephanie and Angela met me at my house and we loaded up in my van and set out on our way. We weren't sure about the parking situation but ended up parking right by the start and finish line! Perfect! And we were lucky....the rain had stopped! We met everyone at our meeting place for a few pictures and prayer.


Stephanie and me before the race! 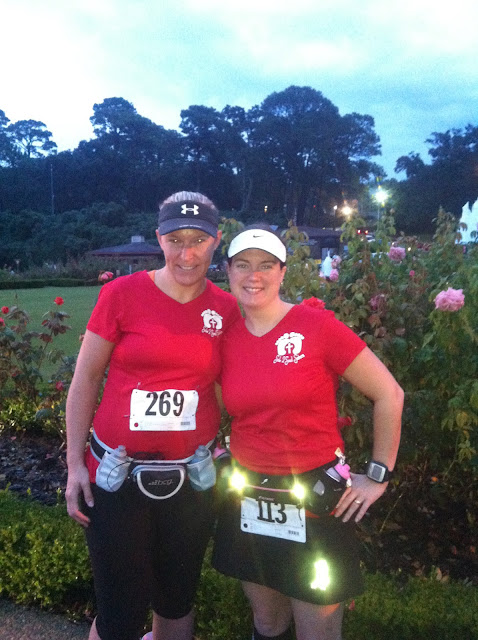 Our Sole2Soul Sisters mascot...Cody! He ran every training run and the race with his mommy Kay! 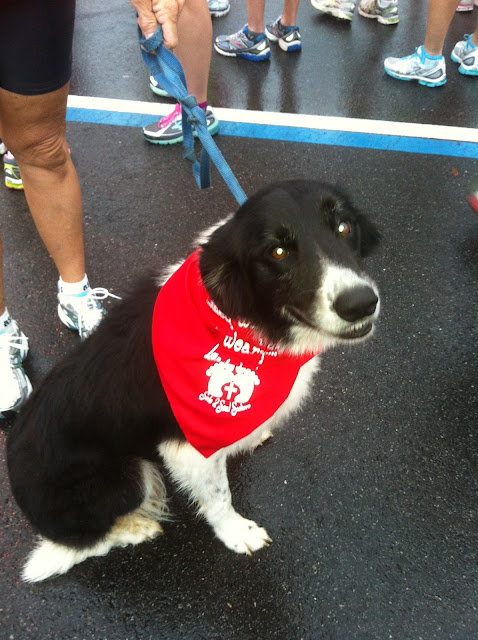 Me and Katrina...who ran the half marathon and is 36 weeks pregnant!!! Amazing!!! 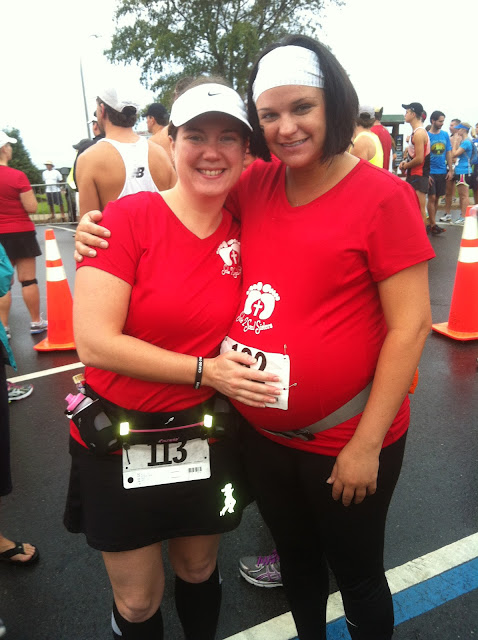 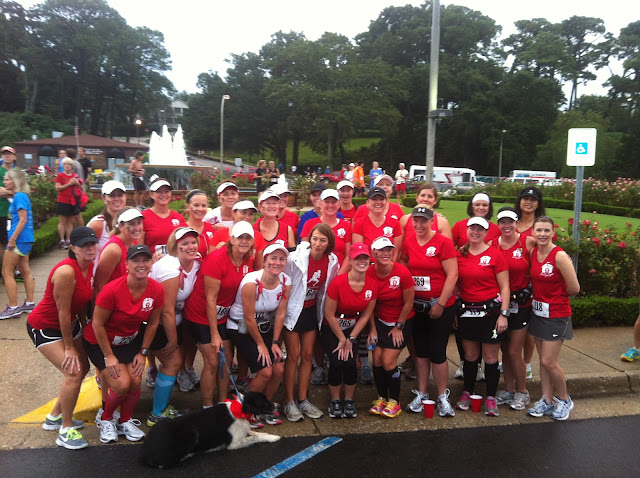 After pictures and prayer...the wait began. The race was supposed to start at 7:10 but because of the rain they were running behind. One of my biggest pet peeves is when races don't start on time. But I told myself to be understanding since the weather had been so bad. But it sure didn't help my nerves! Finally about 7:25 the gun sounded and we were off! We ran through the chute...and then a lot of us slowed down or walked up the HUGE hill. Not fun having to start a race up a steep hill. Once I got through the steepest part I started running....but was running up a gradual, long hill now. My adrenaline was pumping though so I barely noticed. I ran with several of my ladies during the race...me and Holly from Running and Baking Oh My ran most of the race together!

I knew going into this race that the course would be tough. It was very hilly for the first 8 miles of the race...and then a few slight inclines through miles 8-12. And the last mile had a hill. So I was mentally prepared for those hills and just took them slow.


I know this may not look like bad hills to some of you...but to me...these are bad hills!!! 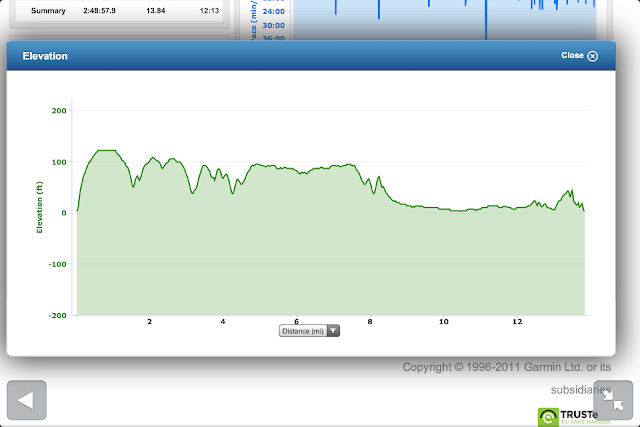 Miles 1-6 flew by for me although they were tough with the hills. My goal was to stay at an 11:30 pace and I did pretty good with that. It was awesome and a huge surprise at mile 4 to see some of our Sole2Soul Sisters that weren't running the race on the sidelines cheering us on and taking pictures!!!


So awesome to see them on the side of the road cheering and their children holding up the signs they made us!!! 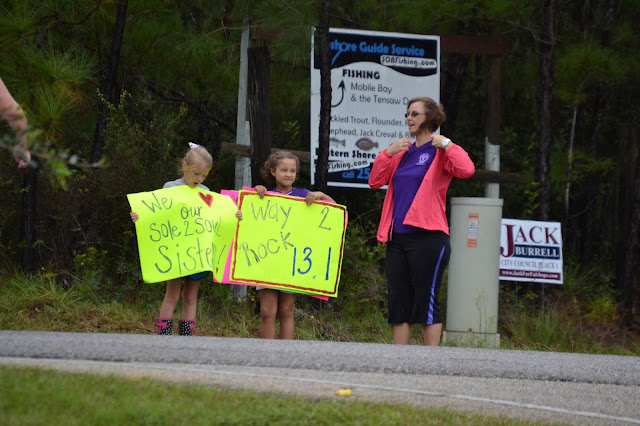 Here is a not so flattering picture of me at the mile 4 water stop with pretzels in my hand lol! 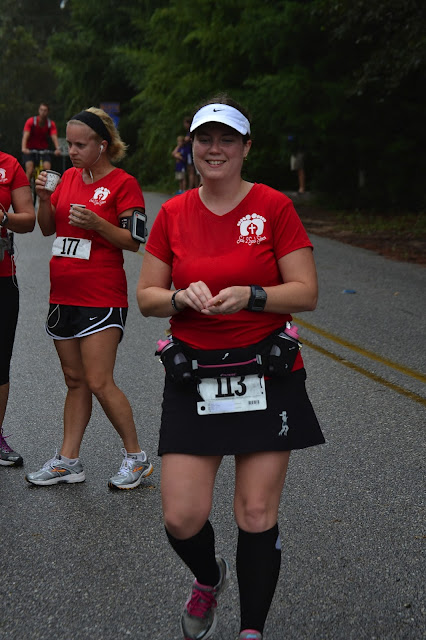 I kept going past our cheering sisters for mile 4-8. We turned around at one point and headed back so we got to see our sisters again at mile 8! They were there at just the right times when we needed that extra push...at least for me! :-) Jennifer and Christina took a few pictures of me running at mile 8...there I go with my crazy arms up in the air again lol! 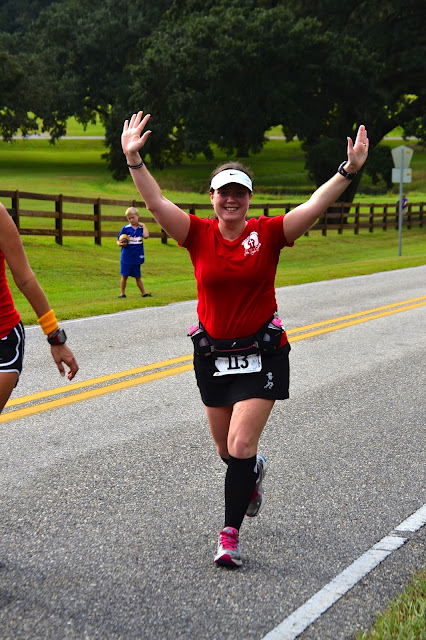 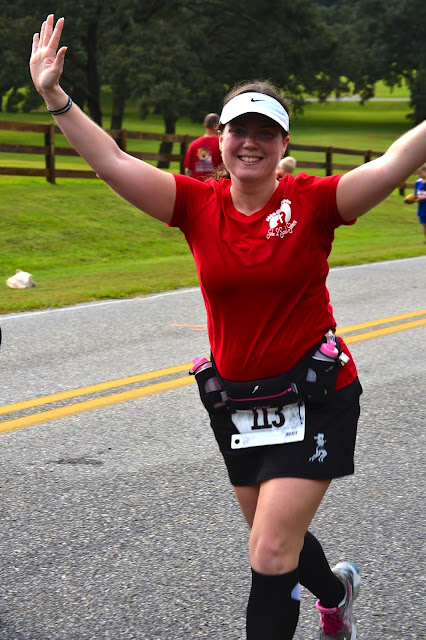 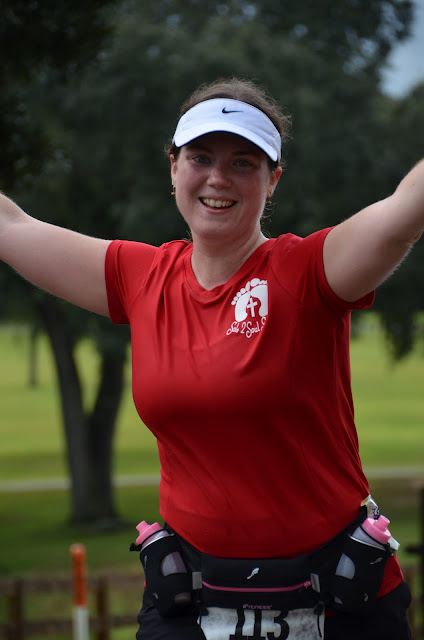 We turned down a new road and the race got very boring. There weren't any spectators out along the rest of the race route. It was becoming pretty mental for me now and Holly and I had stopped talking...I think we were both feeling the effects from the hills. We started taking a few walk breaks. And I insisted on a picture at mile 10! :-) 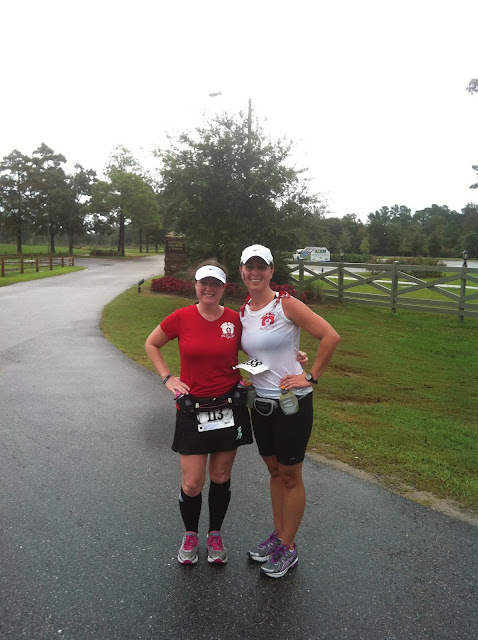 By this time...my very sore calves from my workout the other day were killing me. They were super tight. I urged Holly to go on and I stopped to walk for a bit...walking actually felt better than running because it stretched my calves out. Miles 12-13 I ran/walked.

I looked down at my Garmin and saw I had hit 13.2. I knew I still had a ways to go. I know routes can be off from your Garmin due to running the tangents. But I didn't know it would be this far off. I finally reached the steep hill from the start and started running down it. By this time it had started to rain...and the road was slippery. The hill was so steep I was afraid of falling so I walked down it. I knew the finish line should be near...and then a race volunteer tells me I have to go right instead of left toward the finish line and run a loop down near the duck pond. WHAT???? I'd already ran a half marathon! Why were they tacking on even more mileage when the finish line was right there??? Of course I made the loop and felt such a sense of relief when I finally crossed that finish line. The total mileage on my Garmin said 13.84 miles!!!!! I was a little upset that the course was that far off! I accepted my medal and headed toward the tent where some of my Sole2Soul Sisters were standing and cheering. And by this time....the rain started pouring down! But I was done...and I was sooo happy! My Garmin time was 2:48:57 for 13.84 miles....my official race time was 2:49:08. 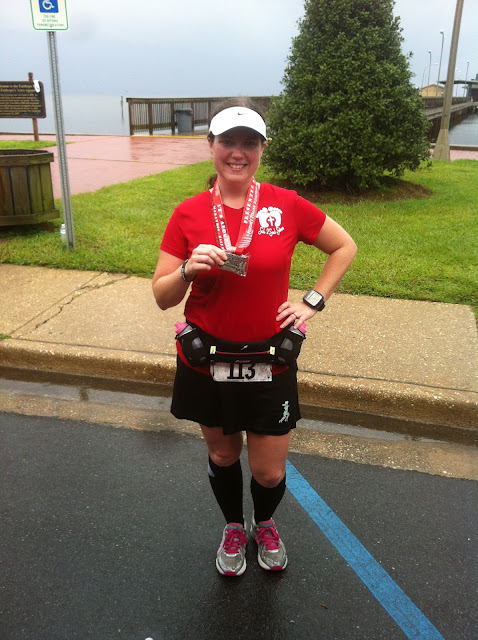 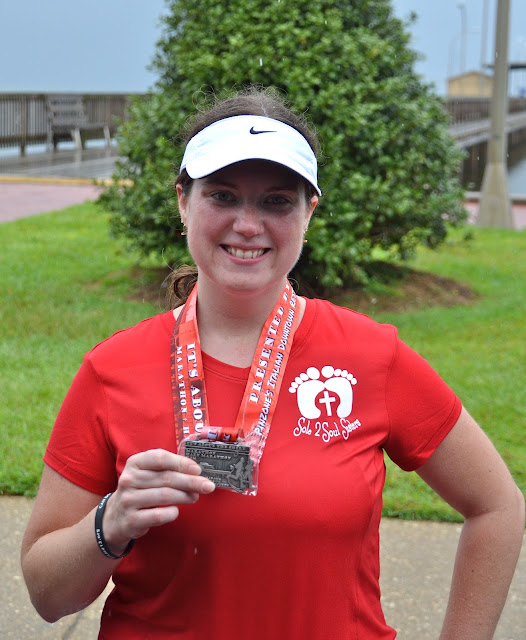 Now it was time for the fun part...cheering on the rest of the Sole2Soul Sisters!!! It was so awesome watching them cross that finish line and seeing the emotion on their faces!!!!

We didn't get to take as many pictures after the race....because the monsoon had started! Luckily most of our runners came in before the downpour...but I felt bad for all the runners who were running the marathon in that weather!

Me and Stephanie with our bling!!! So excited she ran her first half marathon!!! 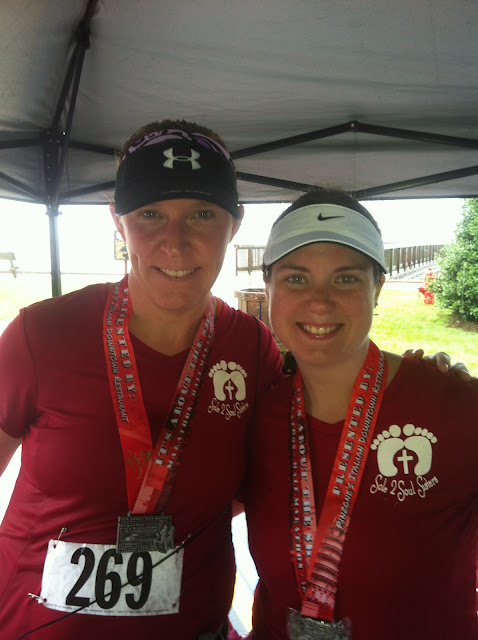 This was the first year for this race so I knew it wouldn't be perfect...not starting on time, no timing chips...tear off bibs, course too long. I found out later that the reason the half course was too long is because the race volunteers did not turn us around at the correct spot. I know they will fix that next year...at least I hope they will. They also did not close the roads so the runners were fighting traffic for a lot of the course. We had cars stalking us from behind, then speeding up and going around us, and then we had to smell their exhaust for awhile until they could pass the next group of runners....that's not fun. Hopefully they will close the roads or at least block off a lane for us next year.

But this race was for an excellent cause! And the medal was awesome!!! Very nice and worth that extra mileage! Will I run it next year??? Probably so...especially since they are offering us 50% off next year's race because of all the mishaps. I love that it's local too. 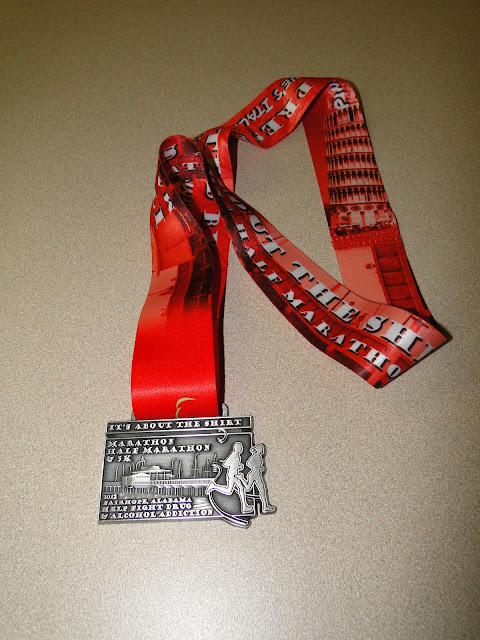 And what about the shirt? Yeah...it wasn't bad! It was a Brooks tech shirt...with an awesome picture of the Fairhope Fountain on it! In race tradition, I wore the shirt and my medal for the rest of the day! :-) 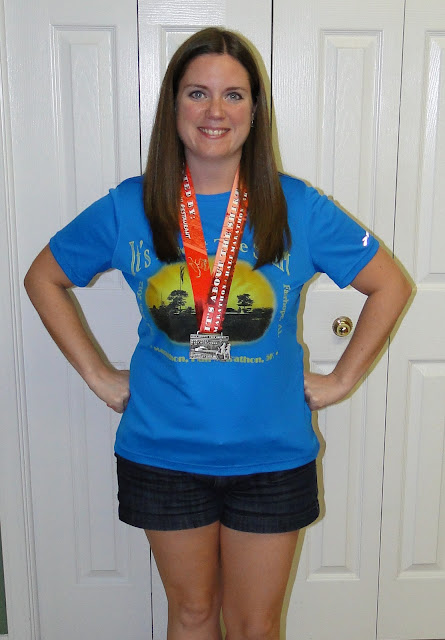 QOTD: What's the most extra mileage you've had to run in a race?