Make sure you read part 1 of my recap!

When I left off we had gone to bed. I slept really well which is unusual for me the night before a race in a hotel. I usually don't sleep very good. What's even better is we got around 7-8 hours of sleep! The alarm went off at 5 AM. I was ready! I felt well rested!

I got dressed in my race gear...hey it's all about the outfit right?! :-) I was excited about wearing my Sweat Pink Race tank! 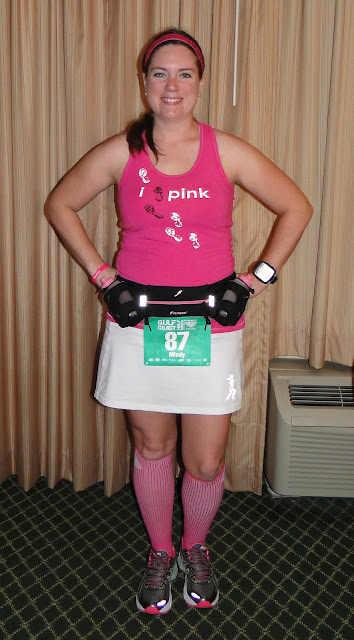 After I was dressed it was time to fuel some. I usually eat a waffle or bagel with peanut butter on it. Then about 15 minutes before the start I eat a banana. I brought my peanut butter....but forgot my bagels and banana at home! Luckily I had stashed a Smores Luna Bar in my suitcase so that is what I ate. And I ate a pack of sports beans before the start. Little did I know that fueling different would affect me later in the race. (I know, I know...classic no no)

We had a plan to leave the hotel around 5:40....we didn't want to get on the wrong interstate and then get stuck in race day traffic like we did last year! We also were smart and drove to Fontainebleau Park where the race starts and finishes the day before so we knew exactly where we were going! We made it with plenty of time to spare...and headed straight to the porta potty lines! While waiting I got bit by about a dozen mosquitoes! If you've ever been to Louisiana then you know that the mosquitoes there look like they are on steroids...they are HUGE! And they were biting me straight though my socks!!! Not fun!

We made it through the porta potty line and then headed towards the start line to wait on our friend Donna who was staying at a different hotel than us. We of course took a few pictures!


Me and Paige! She bought a Sweat Pink Race tank so we matched!!! 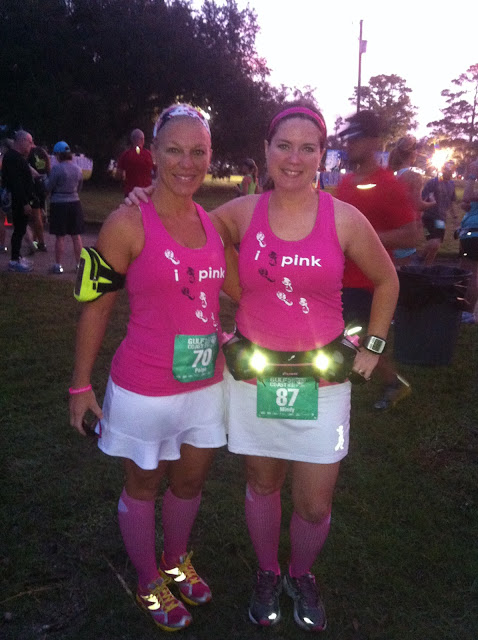 Paige, me, Gina, and Angela at the start! Yes...we were aiming for all pink for Breast Cancer Awareness! We found Donna and got one last picture before the start! And you can't really see in the pictures but the sunrise was breathtaking!!! 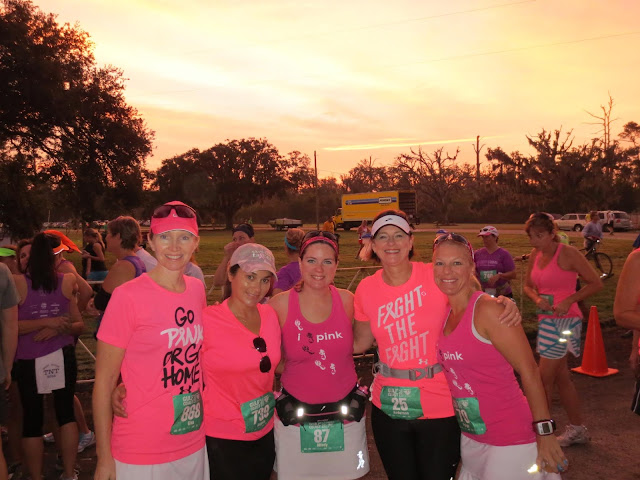 At the start line we met a lady named Mary. She was running the race by herself and seemed really nervous. It was the first time she had run a race in a year because she had an injury. We told her all about Sole2Soul Sisters. And she even joined us when we said a quick prayer before the race. She was super sweet. She ran a little of the race with Paige and Donna but then they got separated. But she was sweet enough to post this picture on our Facebook page so I had to include it! Hopefully she had a great race! 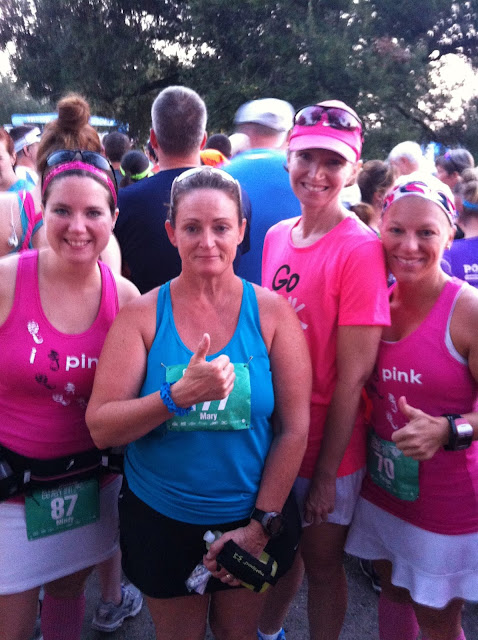 Finally the gun sounded and we were off! As I was running and trying to get through the crowd I heard, "Go Sweat Pink!" I looked up and saw Heather from Running With Sass and her hubby running! Heather had just gotten off a cruise the day before and said she was still feeling nauseous. I learned later that she ended up in Urgent Care later on that day but was ok...she is writing her recap today so make sure to go read it! A few seconds later I heard another hello and it was Gina from Noshing On Asphalt! We were supposed to meet up before the race but she ended up forgetting her Spibelt and had nothing to carry her phone in so we had no way to get in touch. It was a miracle she saw me in the crowd! I also got to see her around mile 7 and she was running strong! She ended up PRing this race so you will have to read her recap too! 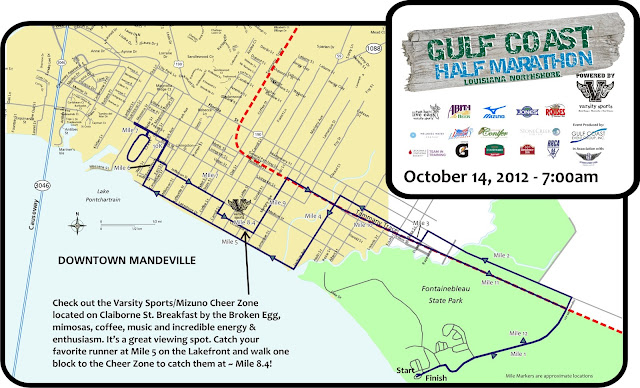 The first few miles I felt pretty good. I was running with Angela and Gina and maintaining about an 11 minute mile pace. I kinda knew I was in trouble because I really needed to stay at an 11:30 pace but I was having fun running with them. Was my hip hurting...YES! But I was pushing through it. Around mile 5 we made it to the lakefront. It was gorgeous running by the water! They changed the course around a little this year so the sun was to our back instead of the other way around and that was nice!


We stopped for a quick picture by the water! 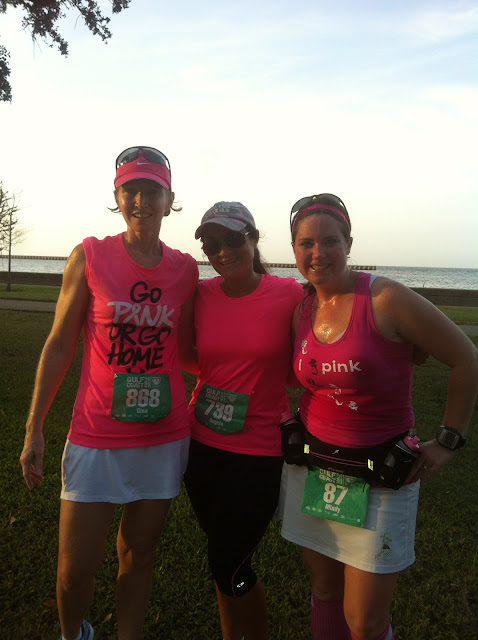 We only ran by the water for about a mile and then we turned into some neighborhoods. And the houses were GORGEOUS!!! This is also where the first of my problems began. All of a sudden my left calf started hurting! It felt super tight and was cramping up. This has never happened to me before! I stopped to stretch it and walked for a minute. Then I started running again and it was fine...and never bothered me again! Weird! All I can think of is maybe it cramped up because I didn't eat my normal banana at the beginning of the race?

We kept running and got to the Varsity Sports water stop around mile 8.5...and this is where my new (I've only had it about a month) iFitness hydration belt failed me. Well...I guess it didn't totally fail me but the elastic loop that holds the bottle in...broke! 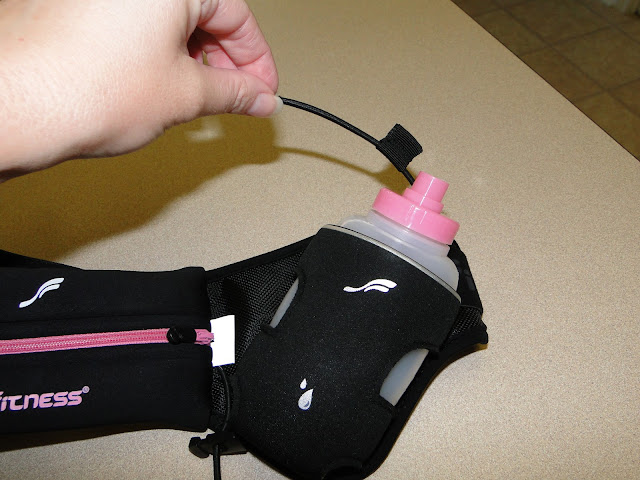 The belt still worked but I was now afraid of my bottle bouncing out of it! Ugh!!! And yes...I've emailed iFitness about this...but I haven't heard back yet. Hopefully they will stand behind their product and fix this.

Around mile 9 we turned onto the paved trail. I remember this part of the race seeming like forever last year. This is also where I had to stop and take some walk breaks because my hip was really starting to bother me. I told Gina and Angela to run on without me. I would walk some and then I would start running and catch up to them...only to have to take another walk break. I was able to take a picture though of this pretty bridge we ran over on the trail! 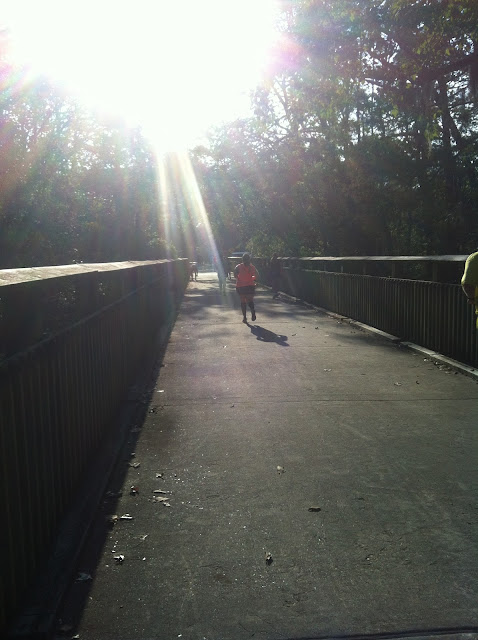 I wasn't the only one taking walk breaks at this point. I talked to several people on my walk breaks and we all complained about how hot it was. The temps were in the high 70's and with the sun in full force it was getting brutal.

Finally we turned off the trail and were back inside the park. I knew mile 12 was close because we saw the sign when we were driving in to park that morning. I was definitely tired, my hip was sore, and I was ready to be done! I made it to 12 and then saw the curve in the road...which meant the finish line was near! Finally I could see it! I sprinted to the line and loved hearing them call my name out as I crossed! My official time was 2:37:18. Not my best but also not my worst. And better than my half two weeks ago! :-)

Here are some finish line photos! 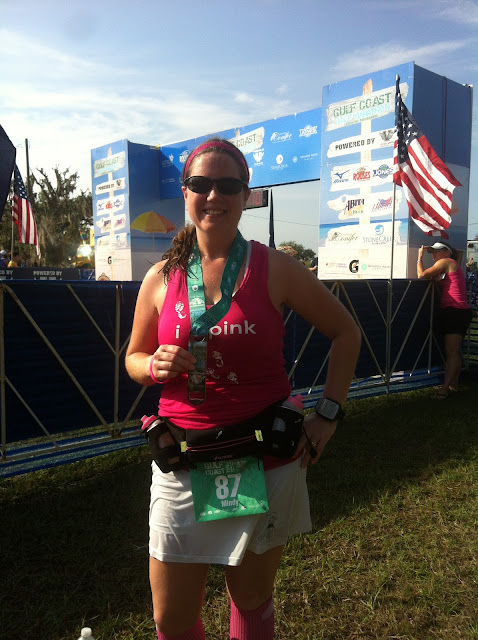 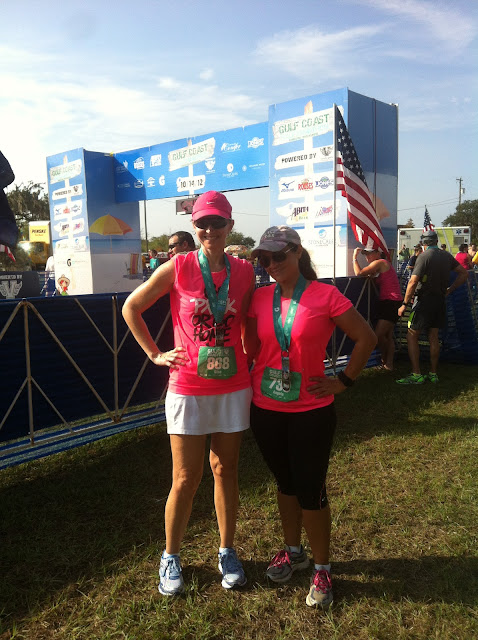 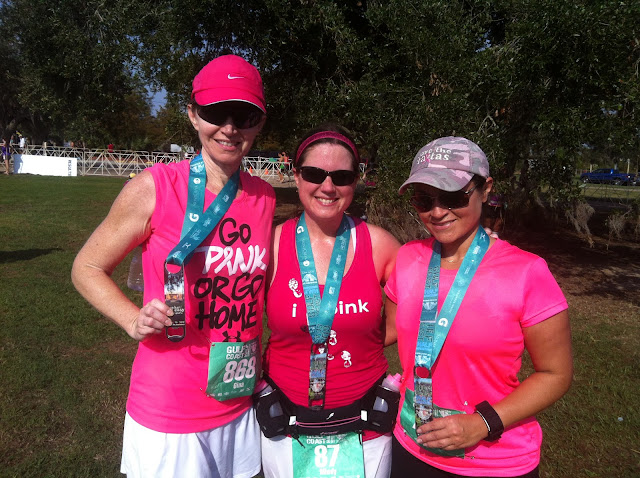 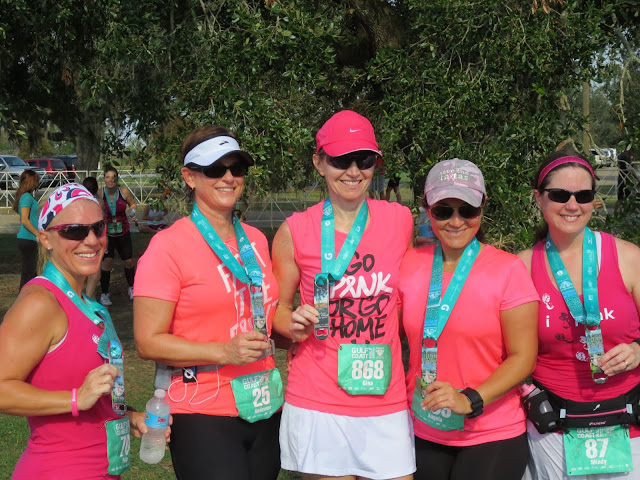 We waited around and watched the awards ceremony. Donna's son place second in his age group...he's fast! Then we loaded up and headed back to our hotel. Another great plus to our hotel...they have a 1:00 late checkout! So all 4 of us were able to get showers! It's a blessing not having to ride home all sweaty and stinky lol! 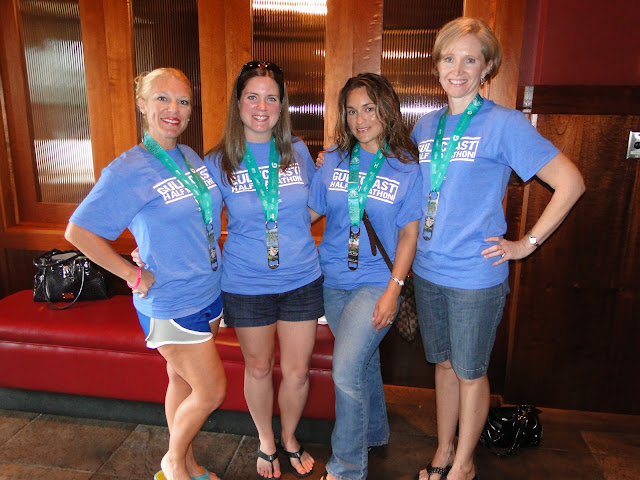 We were starving by this time and ate at Zea Rotisserie and Grill right by our hotel. I ordered the cheeseburger with red beans and rice...heavenly after 13.1 miles!!! 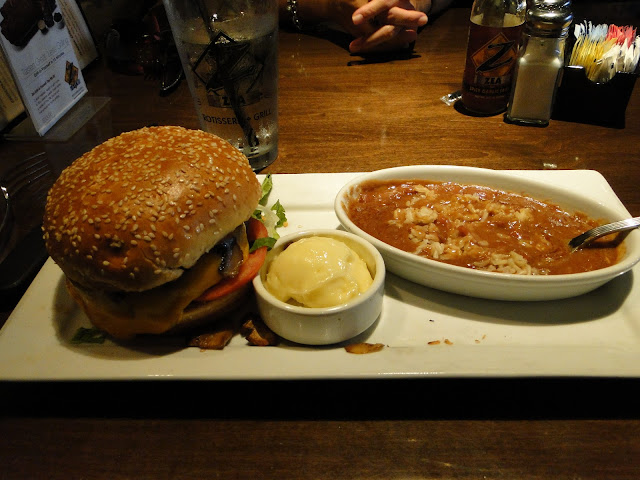 On the way home we stopped at a Snow Ball stand...we were in luck because it was their last day of business until February! We almost missed snow ball season! 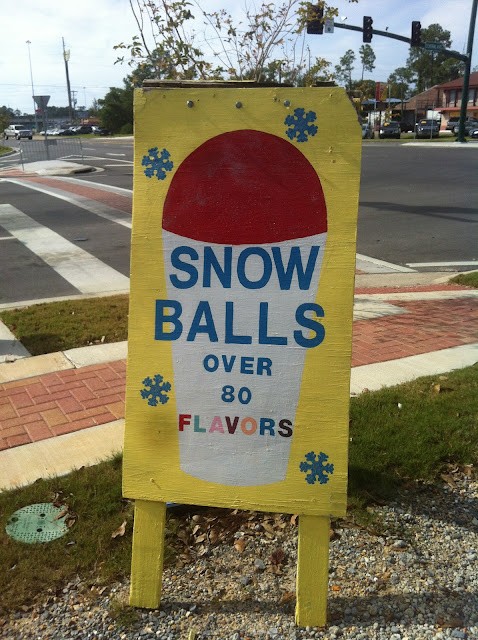 If you've never had a snow ball you are missing out! It's like a cup full of heaven! Unfortunately he was out of a lot of the flavors since it was their last day so I had to settle for just plain strawberry. 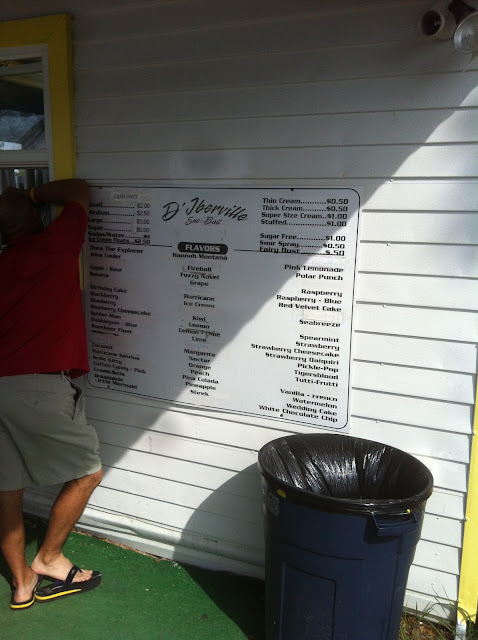 Man was it good!!! I told myself it was helping to rehydrate me!!! Hehe! 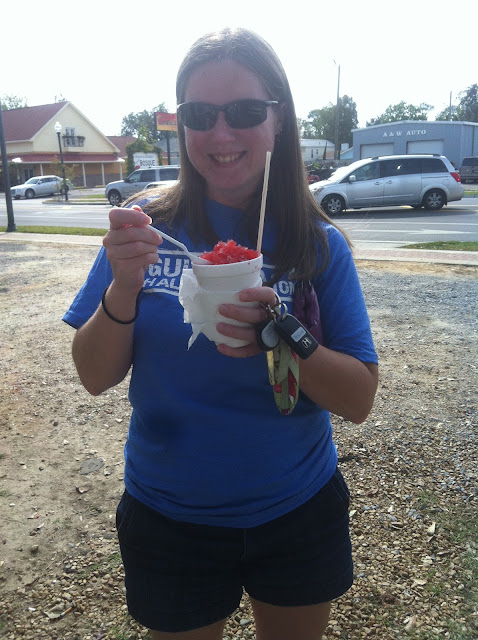 We made it home and I was soooo happy to see my family! I missed all my men in my life lol! Sawyer immediately asked to see my medal...he loves to wear them the day that I get them!

The medal is another unique thing about this race series...yes...it's a bottle opener! :-) 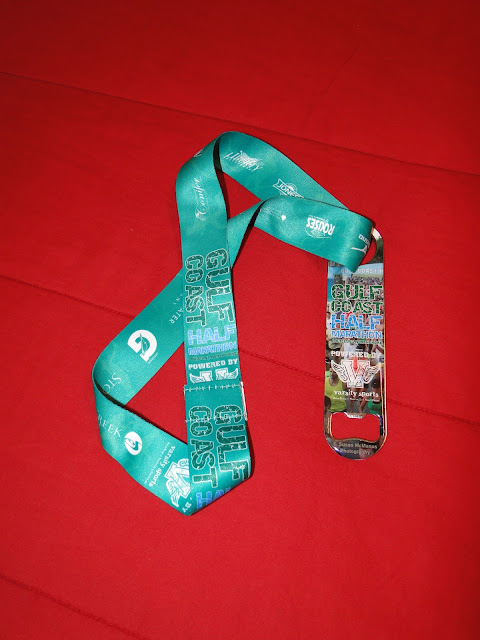 QOTD: What is the most unique medal you've gotten? Or your most favorite medal?