How's everyone's weekend going? We've enjoyed being outside this weekend...the weather was perfect! The temps were chilly (high 40's) in the morning but in the 70's by mid-day...odd temps for May here on the Gulf Coast but I love it!

It's Sunday which means it's time for another runner spotlight! If you would like to be spotlighted on my blog please email me at mindy@roadrunnergirl.com. I am running low on spotlights and would love to feature you! You don't have to have a blog to be spotlighted...you just have to be a runner!
:-)

Today I am spotlighting a fellow Sweat Pink and Girls Gone Sporty ambassador...Megan from #runmeganrun! This girl loves to run and race! She is working on one of my goals...running a race in every state! Keep reading to learn more about her! 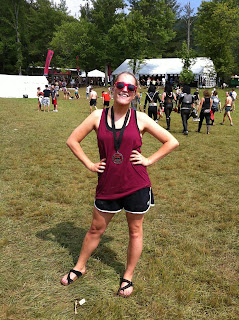 When and why did you start running?
I played soccer growing up, basically from age 6 until I left for college (and still then played intramurals and in co-rec leagues). After two knee surgeries (2007 and 2009), I kinda sunk into a pit of “What now?” I’d relied on soccer for so long to stay in shape, I didn't know what “out of shape” was really like, but I knew that I didn't really like it. Soccer was out of the question though. I start running casually in spring of 2010, and say I started running seriously October of 2011, just after I had moved to Georgia, and I signed up for my first half marathon (January 2012). Here I am a year and a half later – I just completed half marathon #10 and ran my first full marathon in February! 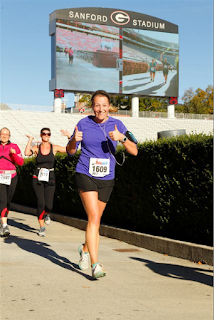 What is your favorite race and race distance?
I’m not sure yet – every race gives a different kind of challenge. Right now, I’d say a half marathon – they've been the race distance I've constantly seen myself improve on (first half in January was 2:19:52 and my latest was 2:01:33) most consistently. I also think it’s long enough to push and challenge you most, but short enough that you shouldn't want to die at the end. I've been working on speed a lot these last two months, so I've also really started to enjoy 5 and 10Ks, just to see where my speed has improved too. 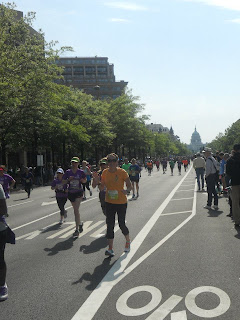 What is your race day routine?
My only constant is eating a half peanut butter sandwich, half a banana and drinking half a Gatorade before I leave the house (sense a theme?). I’ll usually finish the Gatorade while I’m waiting around at the start line along with a half-packet of Jelly Belly Sport Beans or Clif Shot Blox. Anything else, I leave up to whoever decides to control the weather, traffic, and conditions that day. I’m in for the adventure!

What is your most favorite piece of running gear?
I don’t know that I can pick a favorite! I just got my Garmin in September, and I’ll still pretty smitten with her (she’s still unnamed) and all I can get from one little watch when I upload workouts – so cool! But I like any excuse to buy a cute new tech jacket or long sleeve tee or really… anything cute that I can say “Oh, I can run in this!” about. :-)

Do you follow any diet or take any specific supplements that complement your running?
I am the worst running eater ever. I say that I validate my eating with running, but really… there’s lots of room for improvement. But at least I recognize that fact? :-)

What do you wish you’d known when you first started running?
How addicting races would be! I think part of the challenge there is that the races themselves are not necessarily the addicting part, so much as the endorphins of putting yourself all out there for a 5K, 10K or half (or full!), the rush of competing against yourself to keep bettering your times, and the sense of accomplishment that gets you going. And who doesn't like collecting bling? It’s a problem. :-) I’m trying to find more local races so they’re a) closer b) cheaper and c) are smaller and therefore usually more fun!

What is your fondest running memory?
Finishing that first half in January 2012. I don’t remember having any waves of doubt during the race, but upon finishing (and collapsing against my friend, half crying, half panting) I was just in awe that I had done it. The training, the early mornings, the work had been worth it and I DID IT – with just 8 seconds to go to my goal time! Such a feeling!

But similarly, finishing my first full. I anticipated breaking down in a crying, heaping mess at the finish line – I didn't (I don’t think I had anything left). But realizing all that work had come to life, I made my goal of sub-5 (4:58:42!) with just a minute to spare, and had conquered my first full. It was a surreal feeling, and one that I’m still not sure I understand. I eagerly anticipate signing up for my next full for either late 2013 or early 2014 and really being able to test my own limits! 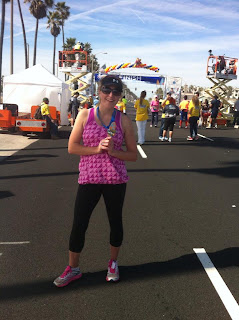 What is one thing that most people do not know about you?
Oh gosh – well, in the online community, there’s lots people don’t know, I can imagine! Hm, by day, I work in higher education, in student affairs, or university administration in the simplest of terms! I used to work in residence life, managing residence halls on campus, and now I work in student life and student organizations! I don’t talk about work on my blog a whole lot, but it’s pretty much the day-time side of who I am! :-) 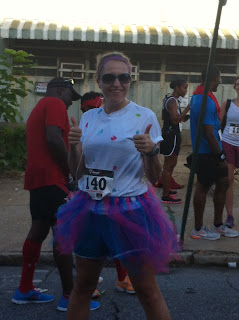 Here are all the different ways you can connect with Megan!

Thanks for sharing with us Megan!!!

QOTD: What did you do this weekend?