The Long Run Where I Almost Stepped on a Snake!!!

Last week's long run was on Friday instead of the normal Saturday or Sunday. I had a kid free weekend planned with my hubby and wanted to spend as much time with him as possible so I got my long run done a day early. My long runs normally consist of about 15-20 other ladies running with me. But this long run...it was just me and my friend Misty. Misty has been running short runs with me about once a week. She used to run in high school but is just recently getting back into it. When I asked her about running 5 miles with me she immediately said yes...although she was a little worried about the distance. She hadn't run that far in a long time. I assured her we would slow down our pace and it would be fun! I knew without a doubt that she could do it!

On the run I wore my new Under Armour tank that I received for the What's Beautiful Campaign with Under Armour and Fitfluential. This may be my favorite tank ever! It was so light and airy and kept me cool during the run! We ran at 8:45 in the morning...and here on the Gulf Coast it is already pretty hot at that time. 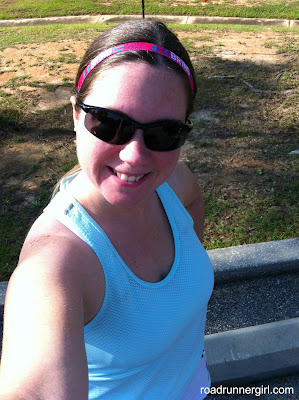 See how light and airy it is? And I LOVE the little reflector that says RUN on it!!! 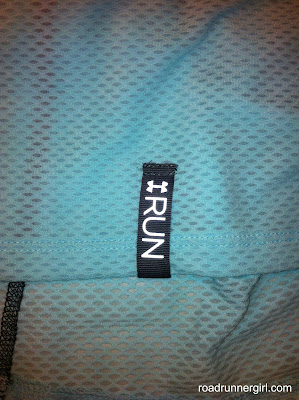 Our run started out well. I turned us in a different direction than what we normally run....gotta change it up sometimes! We were running a pretty steady pace...about an 11 minute mile. Most of the route was sidewalk but during the first mile we had to hit the pavement and dodge some traffic. We were cruising along in a single file line when all of a sudden I screamed! There, only a few feet in front of me on the road, was a huge snake!!! And it wasn't dead! It was curled up but we could tell that it was pretty long. It was orange with some black on it...I have no idea what kind...even though the hubby pulled up tons of pictures of snakes on his iPhone trying to find the one I described. I was freaked out because I was so close to stepping on that thing! Of course we off roaded it to get around it. And our pace got faster lol! We just wanted to get away from it as fast as we could but both Misty and I said we wished we had taken a picture of it.

The rest of the run was snake free thank goodness! We kept our pace pretty steady. But it was really really hot. Misty told me at one point that she may slow down almost to a walk...but she never did. She did AWESOME!!! She ROCKED that 5 miles and I was sooo proud of her!!! 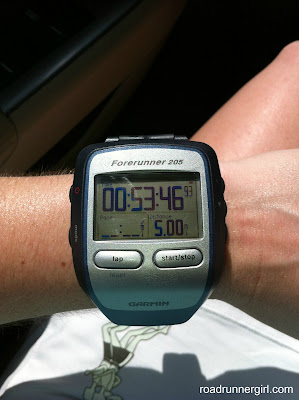 It felt good to enter the weekend knowing my long run was done! I love running long on Fridays when I get the chance. But I also love running with lots of friends when I run long so Fridays aren't usually an option for many people. Either way...the long run is my favorite!!!

QOTD: Do you prefer to run long on the weekend or during the week?