Disclaimer: As a Crescent City Classic Blogger I received a free race entry. No other compensation was provided. All opinions are mine alone.

New Orleans is one of my favorite cities to run in! So I was super excited to get to run the Crescent City Classic, one of the oldest 10K races in the nation, for the third time!

This was going to be a quick trip for me and my running friends since this race is always held on Easter weekend. I have to get back to my boys for the holiday.

We started the trip Friday afternoon. But before we had even left town we got stuck in traffic for an hour due to a wreck right before the tunnel. We didn't let it spoil our fun though. And the fun included a snowball! If you haven't tried one of these famous snowballs then you are missing out! Don't confuse them with a snow cone because it just isn't the same! I got the wedding cake snowball...so yummy! 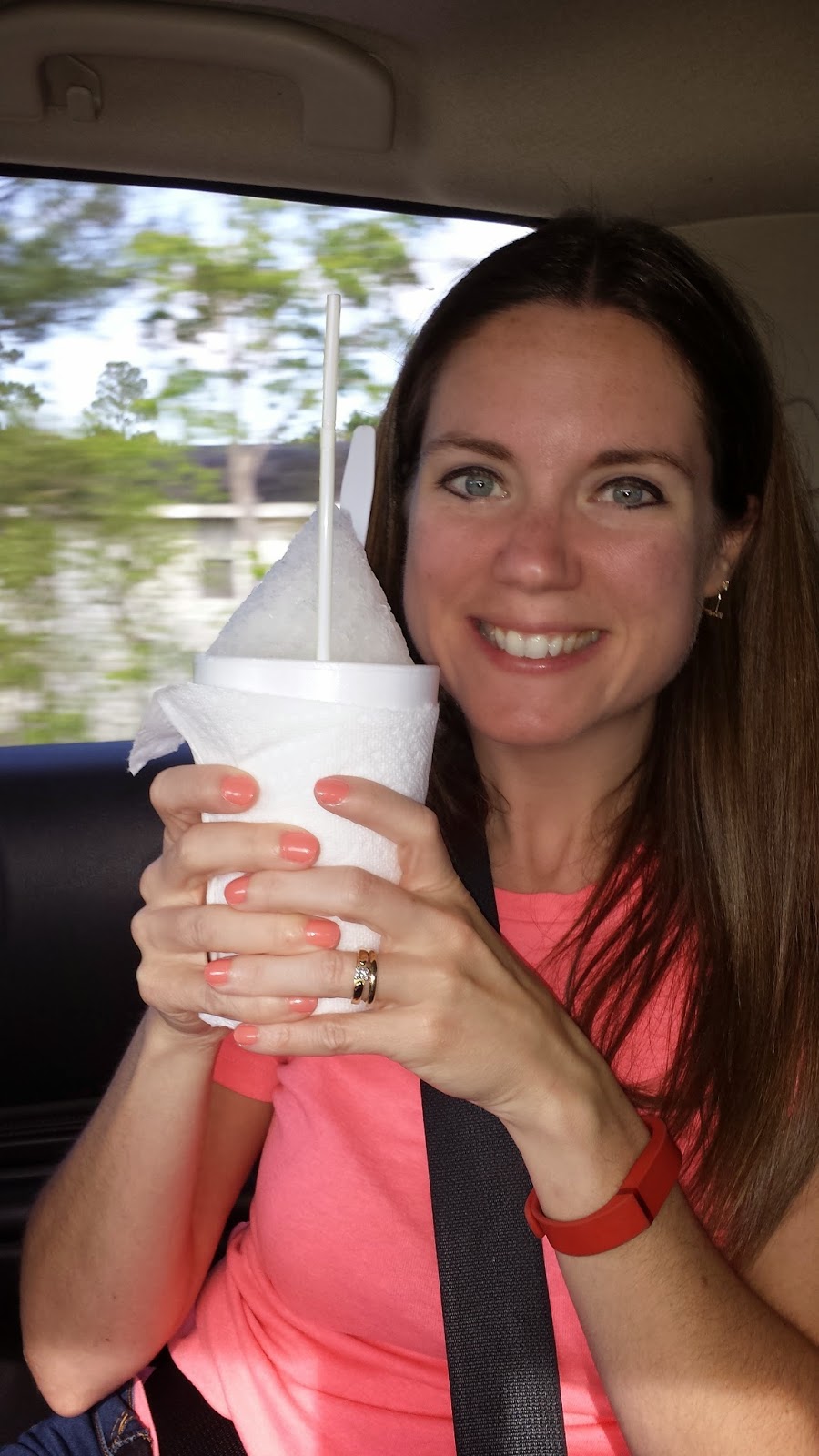 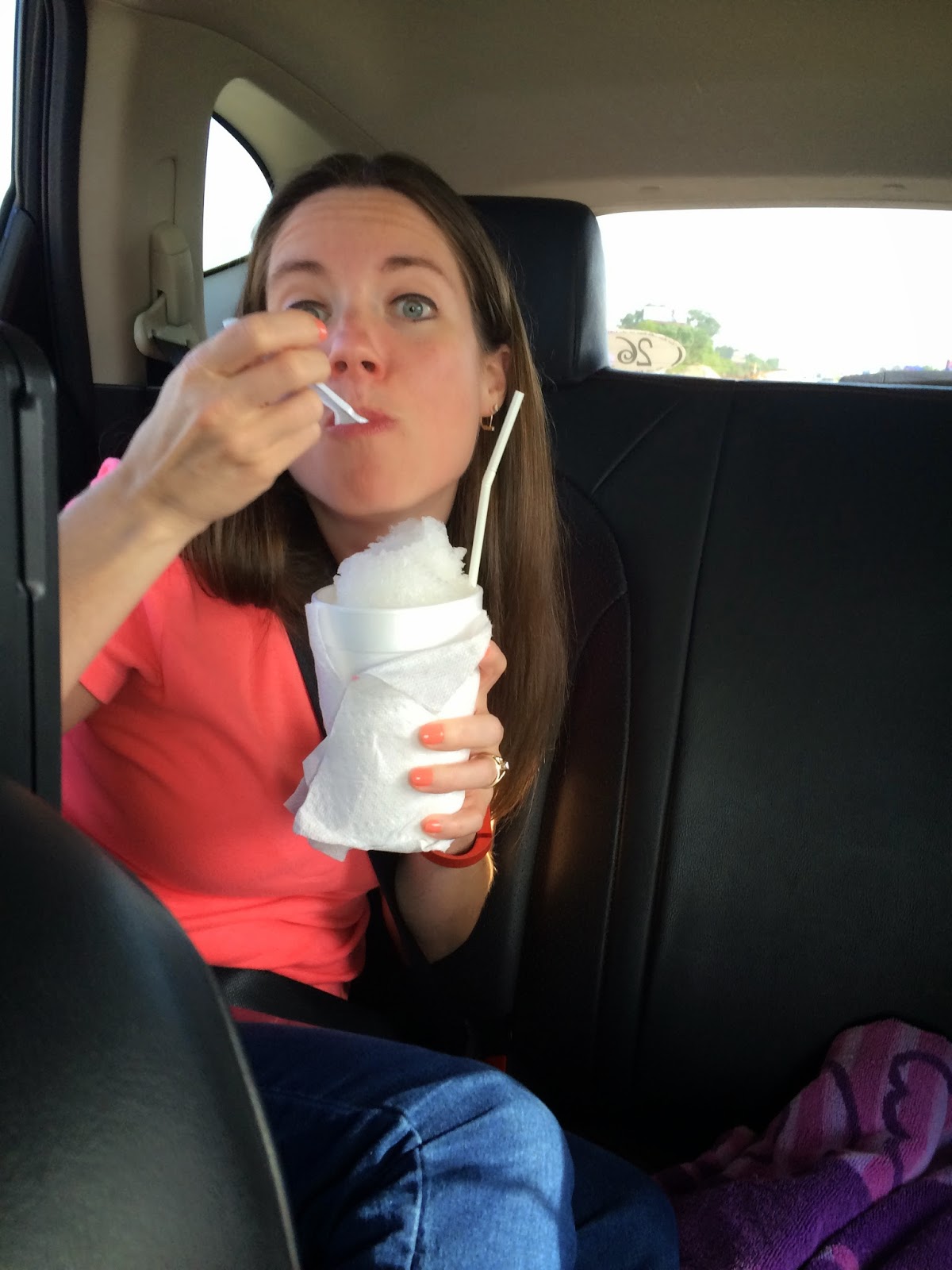 Finally we made it to the expo! Of course being a blogger means you have to take pictures...of everything! My friends are used to all my pictures...and LOVE to photobomb me during them lol! Makes for some very fun pics though! 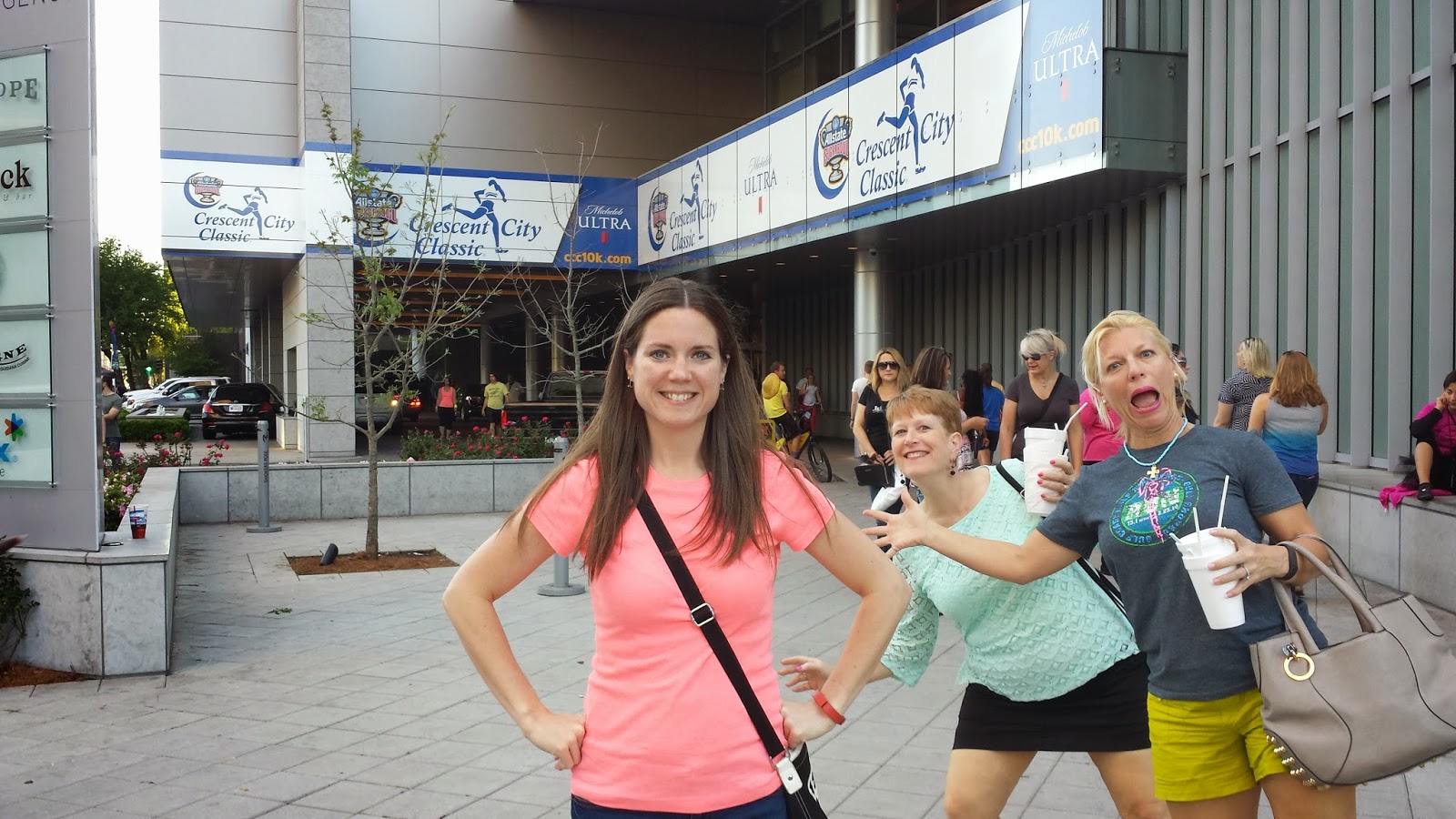 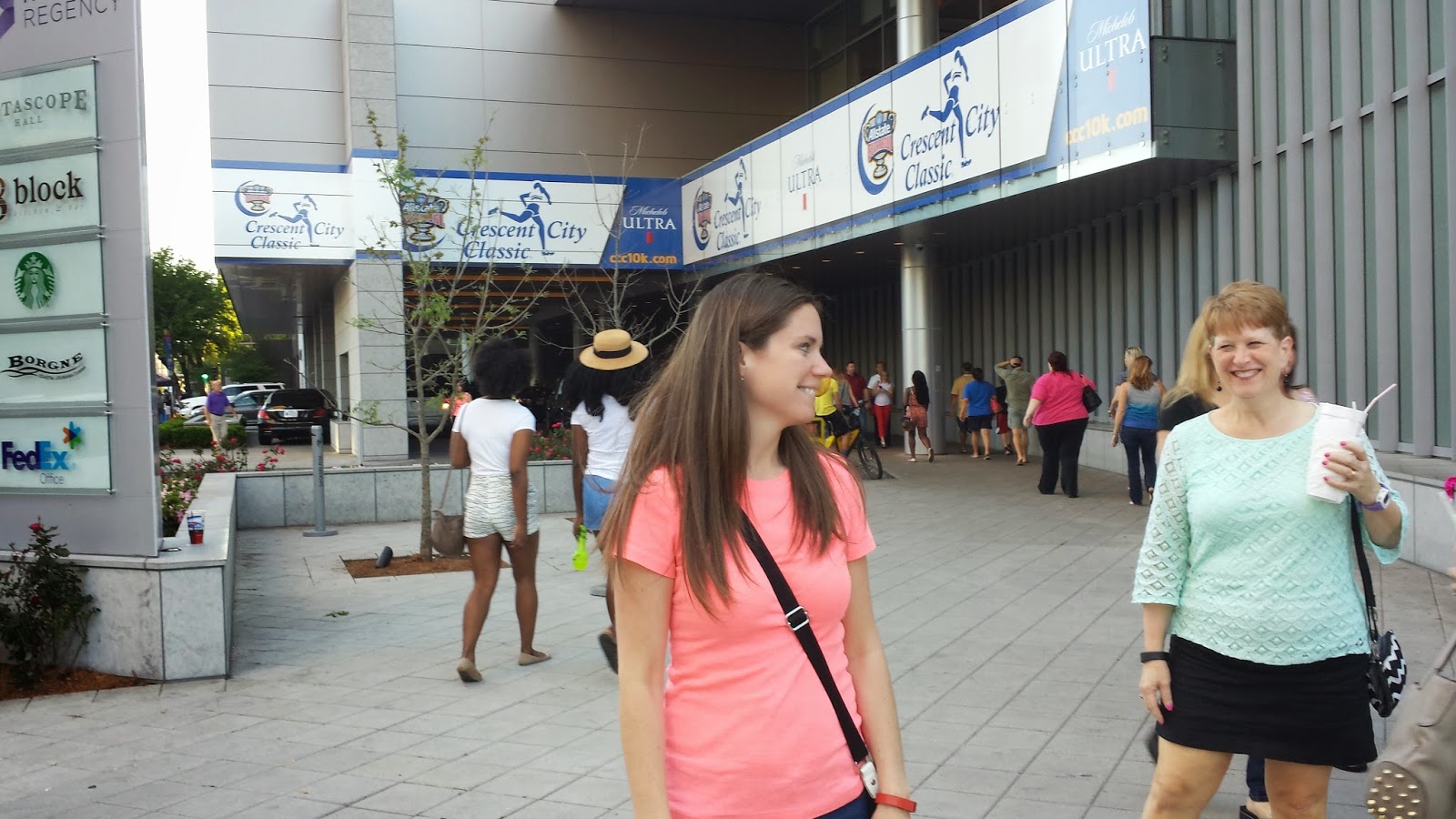 Race packet pick up was super easy like always. When I got my bib the race volunteer said, "Wow you're fast! Go Mindy!" Yes...that literally made my day!

After picking up our shirts we then got a quick picture of us with our bibs. We were all in different corrals so it made for a colorful picture! 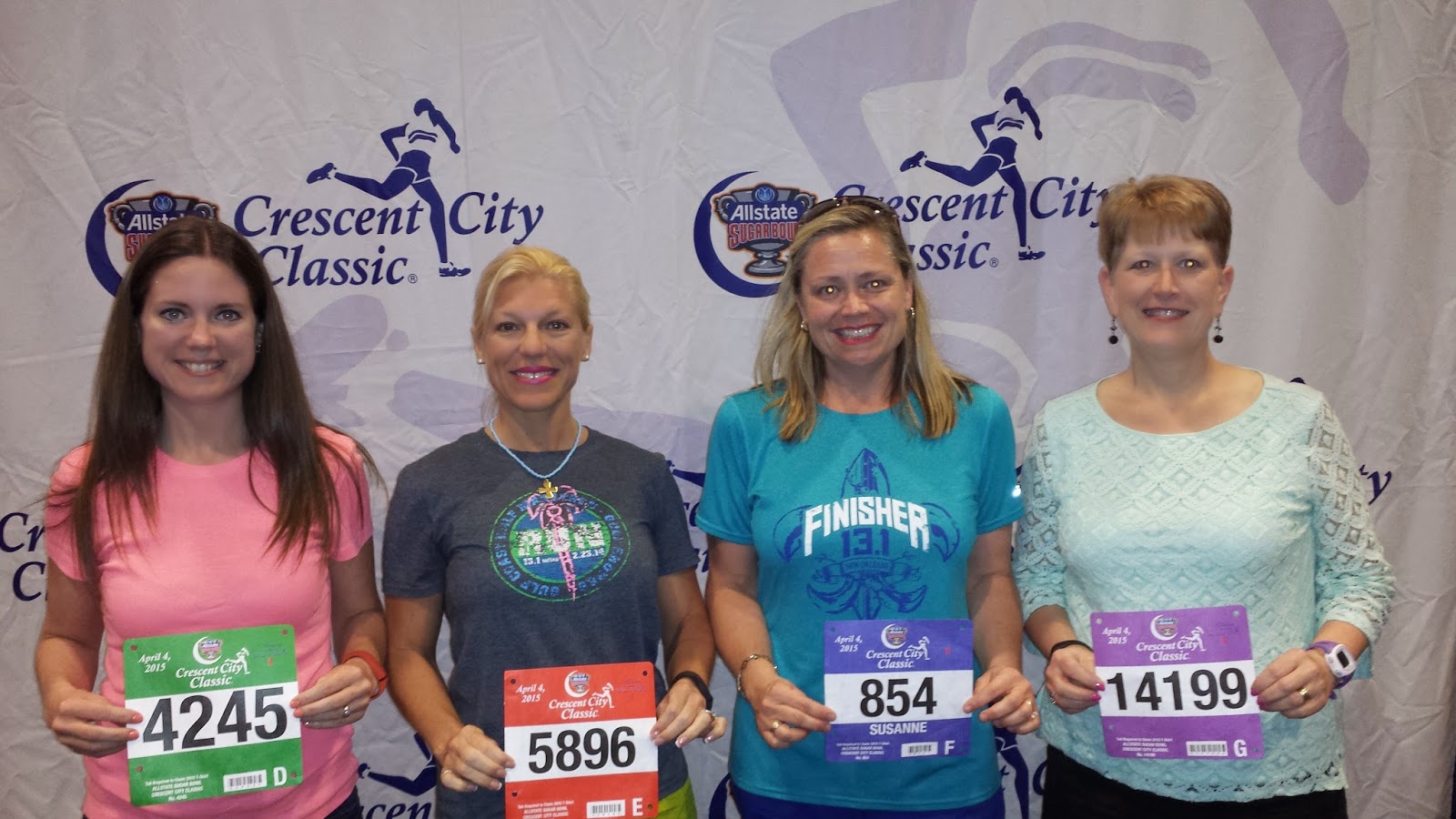 We did a little bit of shopping around the expo. There were several vendors there! 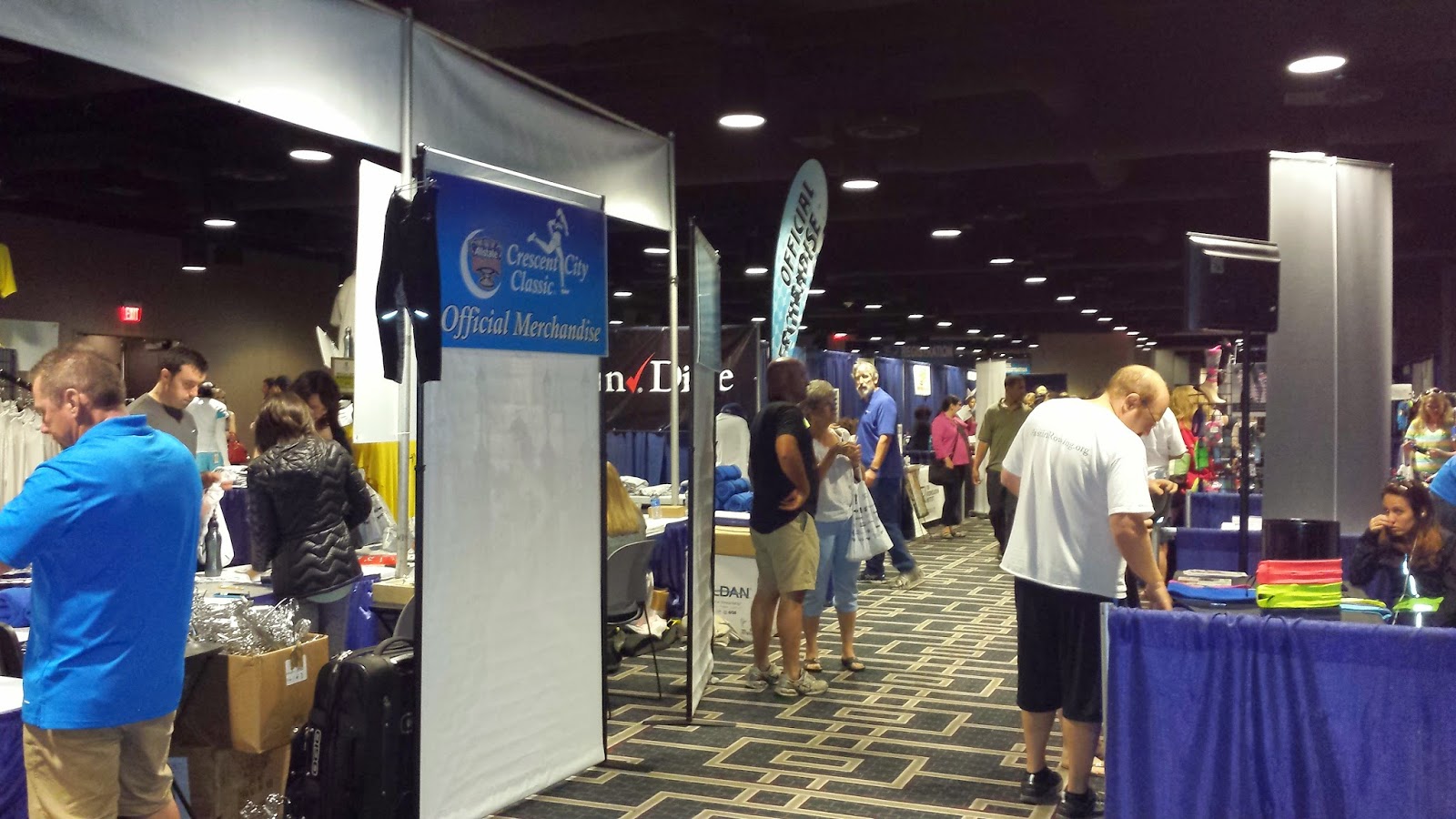 And then we ran into Mike...the coolest race director out there! We came up to his booth and he said, "Mindy! Just the person I need to talk to!" He is organizing a new race called the Battleship 12K and I am super super excited about it! I can't wait to tell y'all all about it! Susanne took a few pics of Mike and I discussing business! 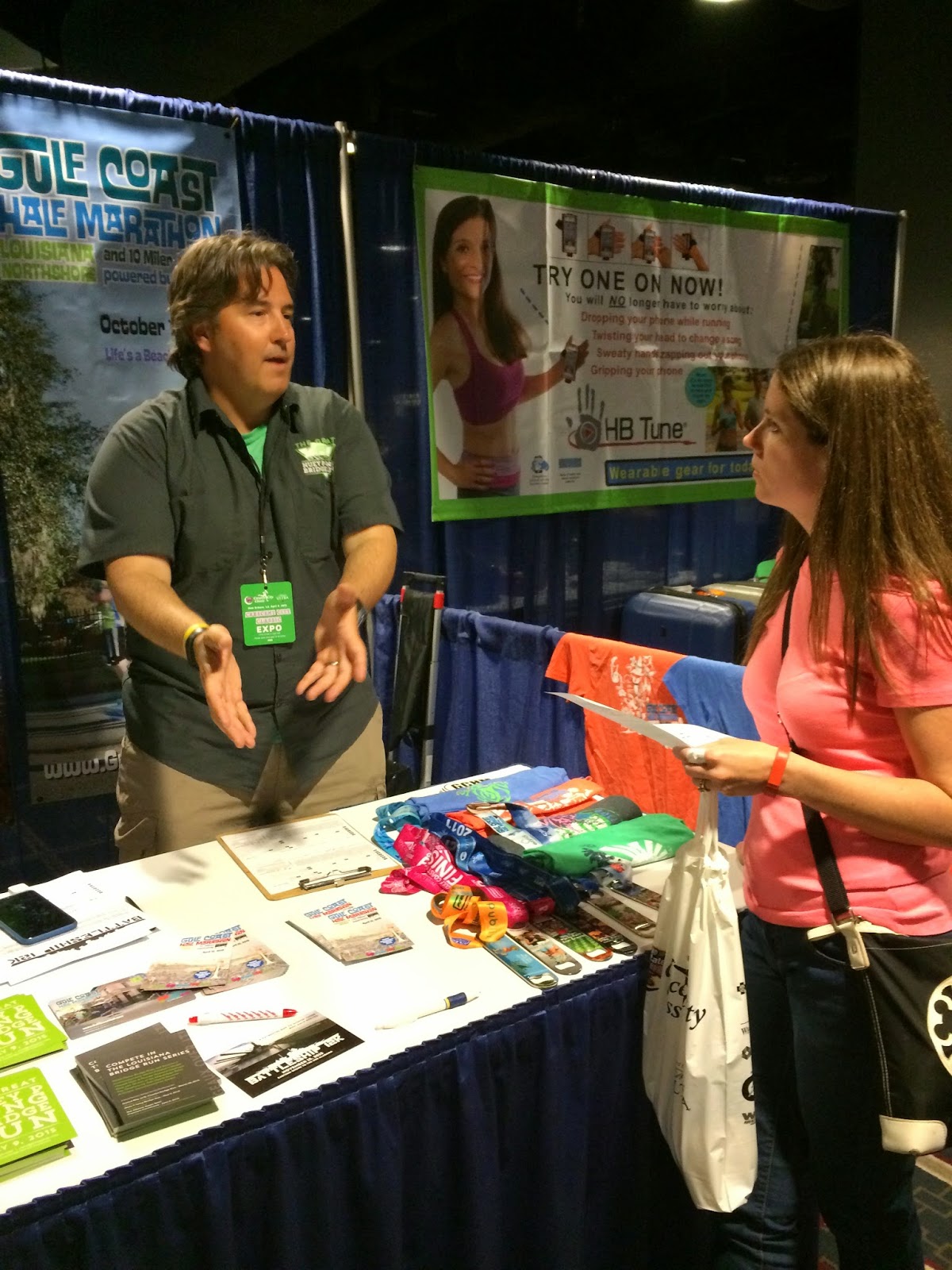 After the expo we headed up to the pool. Paige works for Fat Tuesday and needed to check on the hotel's daiquiri machine before we headed out. Of course we had to take a picture by the pool! 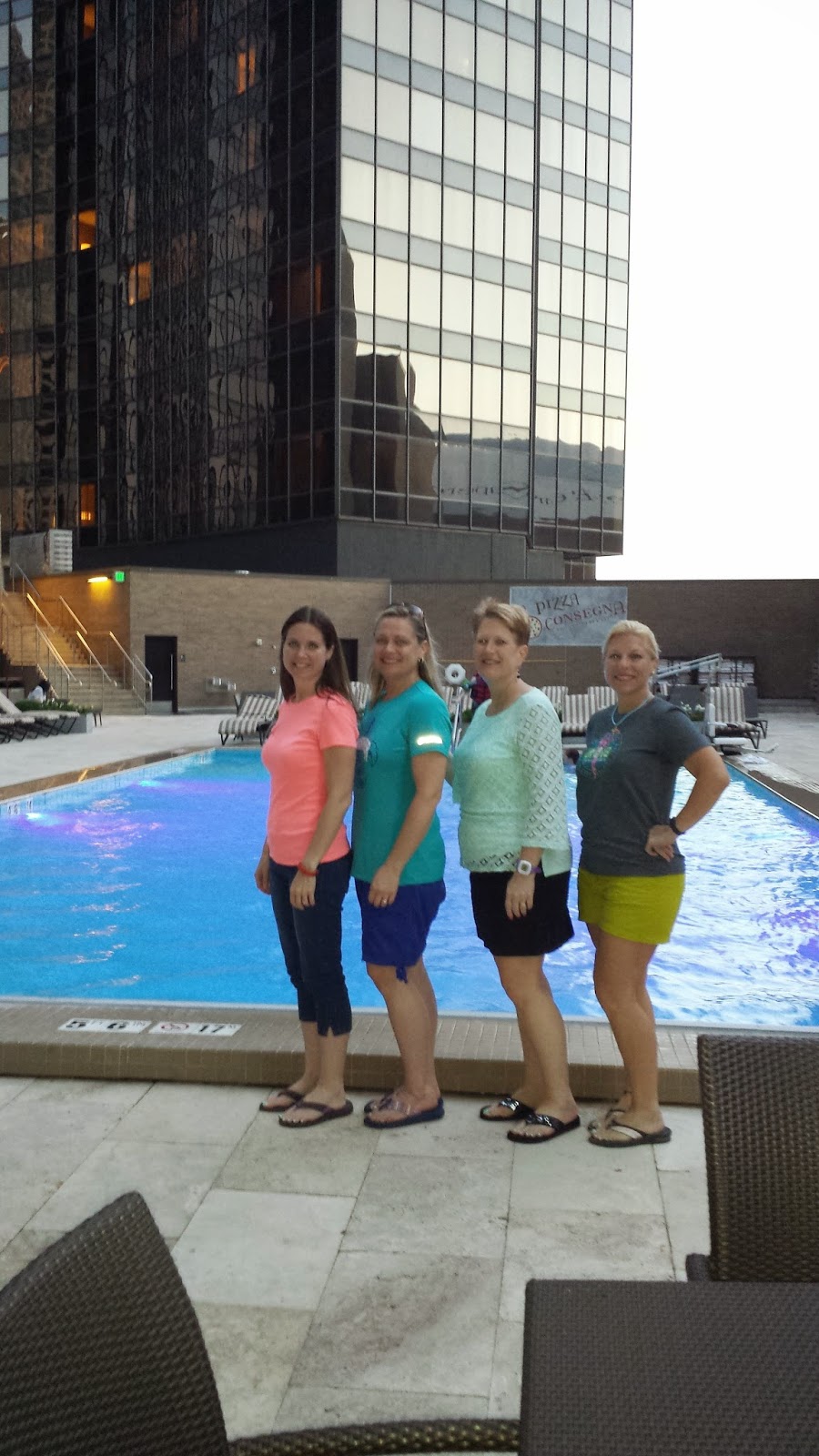 Then it was time to eat! We headed to Mellow Mushroom for my pre-race tradition...pepperoni and mushroom pizza! So yummy! 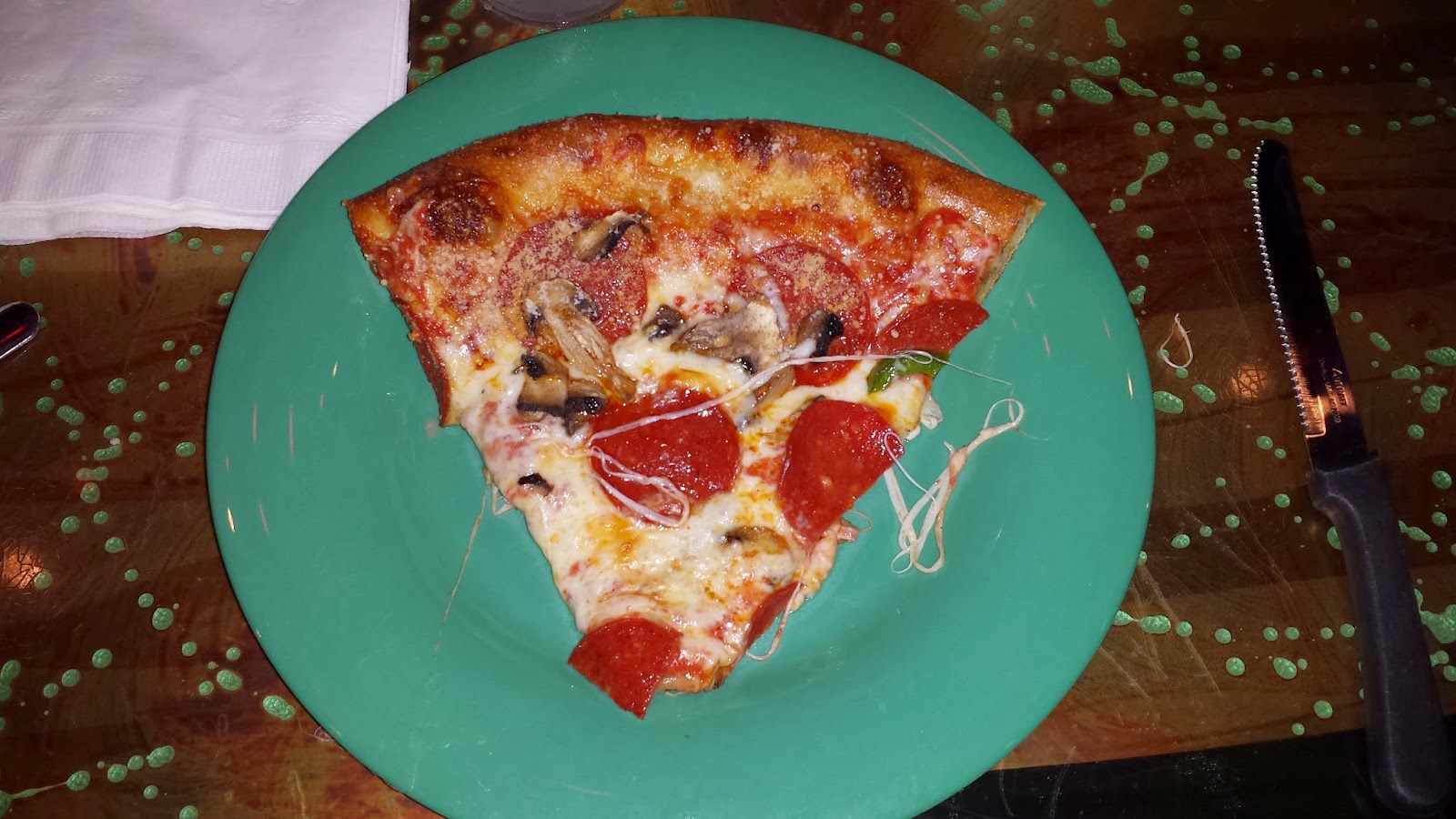 We arrived at the hotel, set out all our race things for the next day, and then crawled into bed. 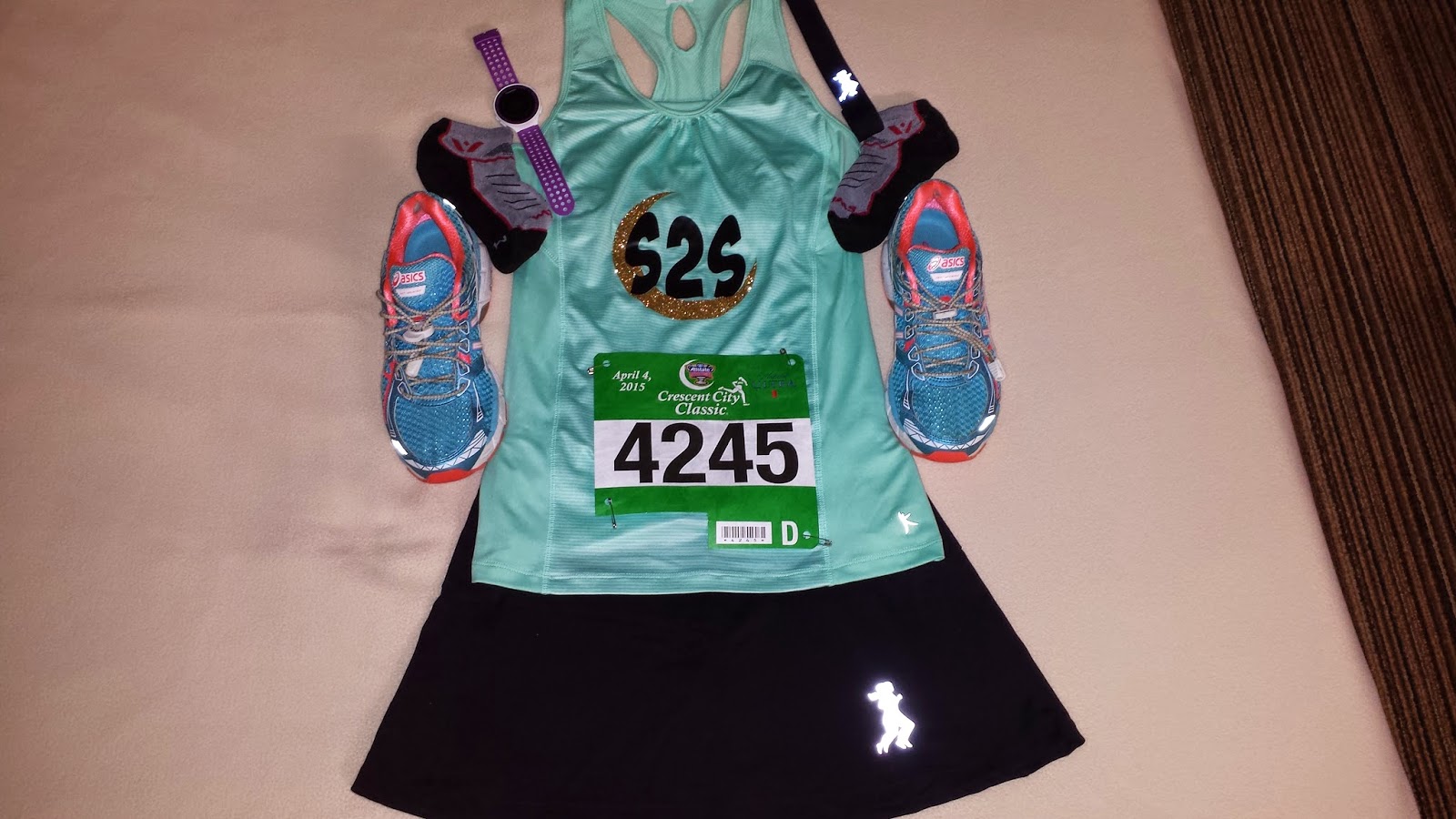 After a horrible night of TRYING to sleep, the alarm finally sounded. We got ready to go! I just LOVED our shirts for this race! The "S2S" stands for Sole2Soul Sisters (our running group). We drove to City Park where the finish line was. Thanks to being a CCC blogger we got VIP parking! :-) We had a short walk to the buses that dropped us off at the Superdome where the start line was. Upon exiting the bus we ran into some storm troopers! So much fun! These guys were running for charity! SO awesome! 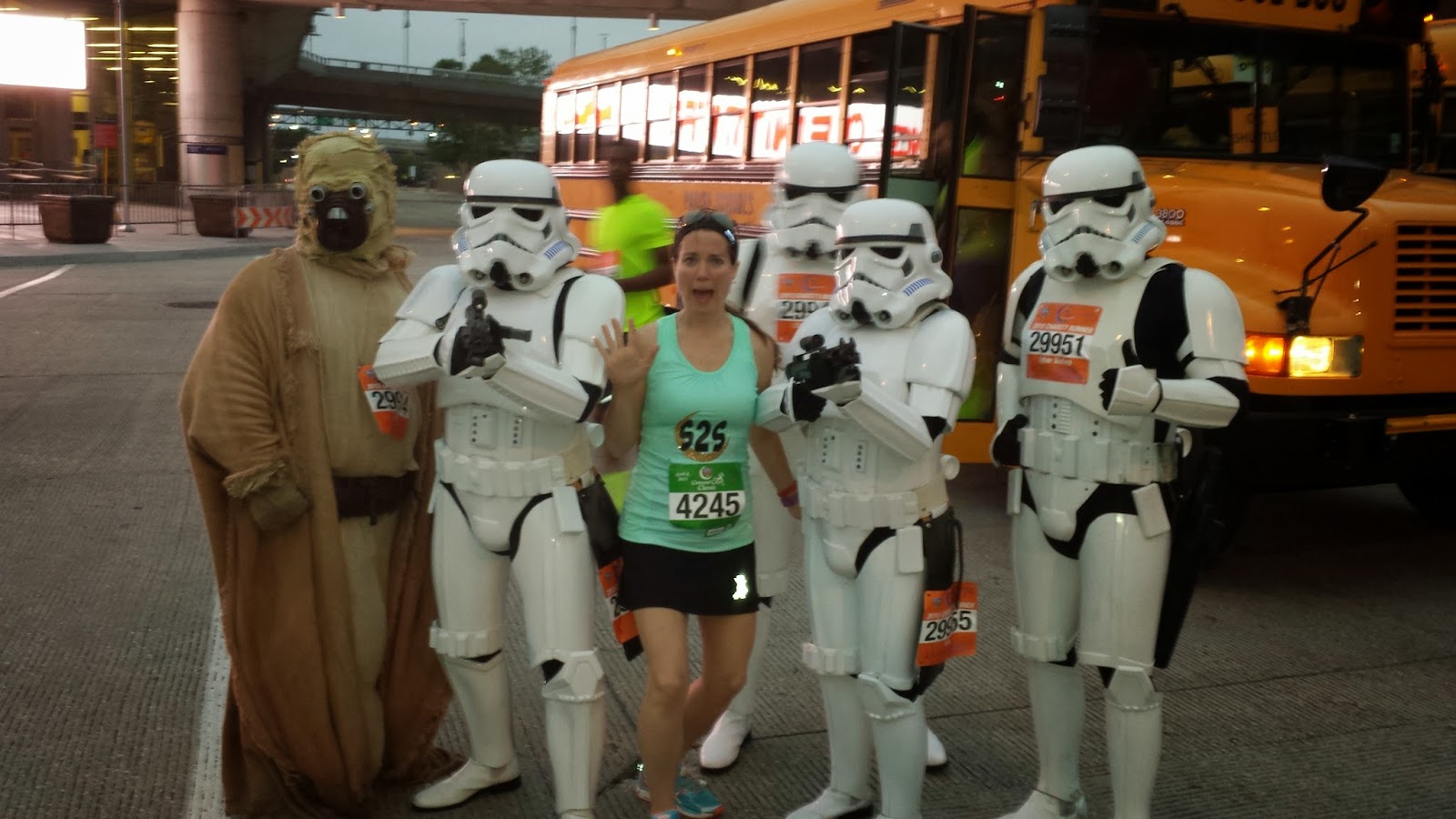 We headed to Champions Square and took a few pictures. There were runners everywhere! It was so crowded! 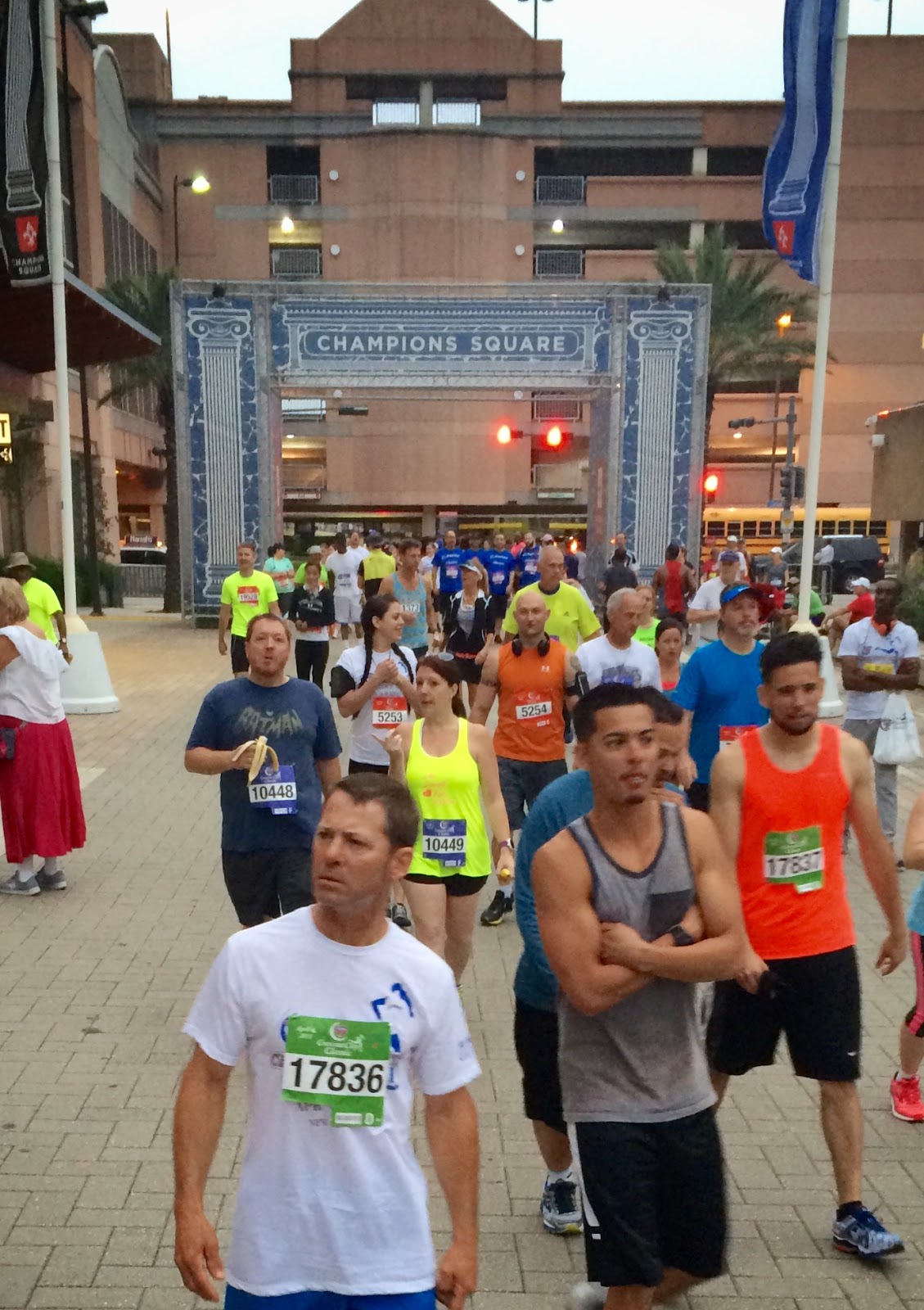 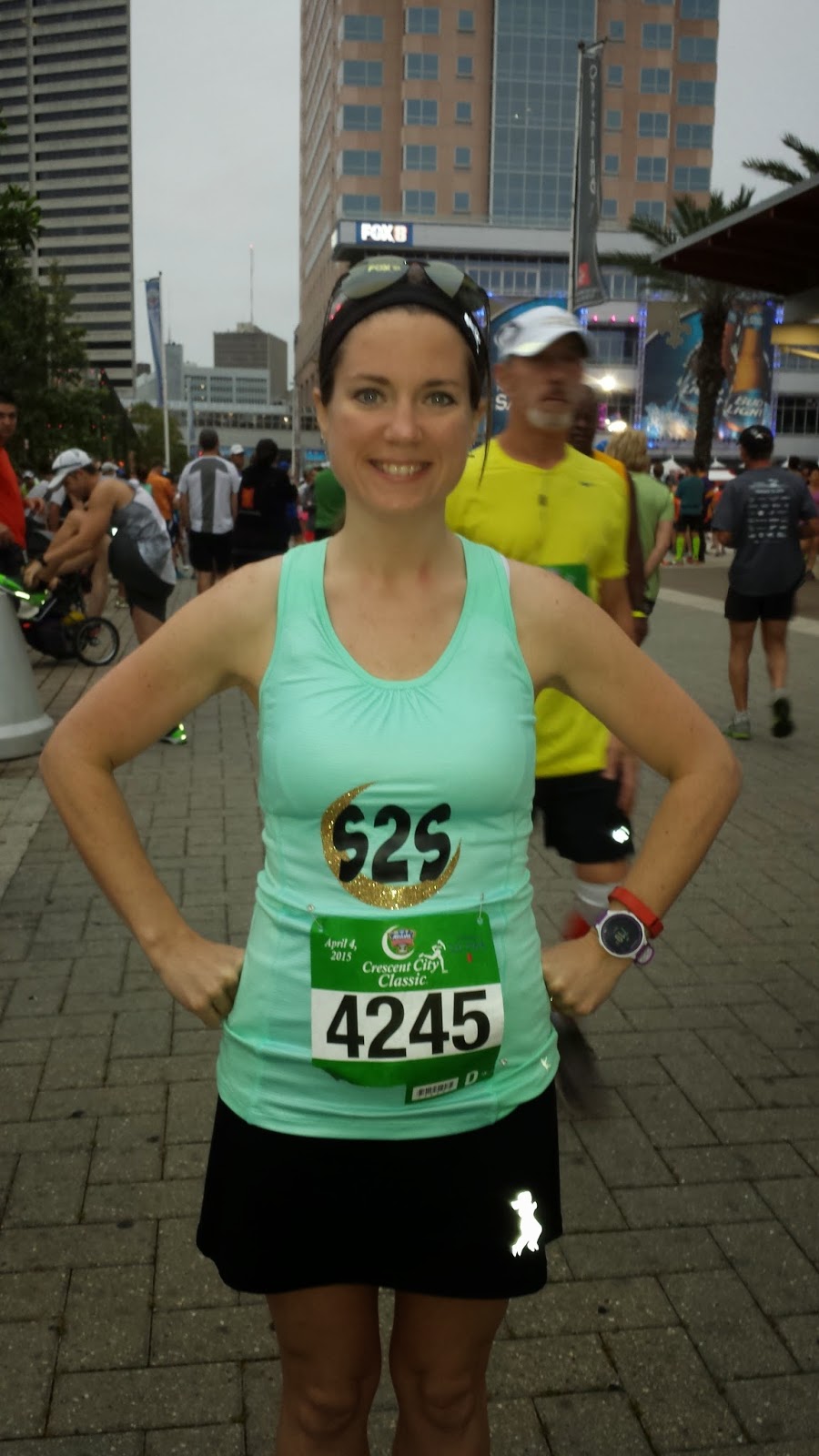 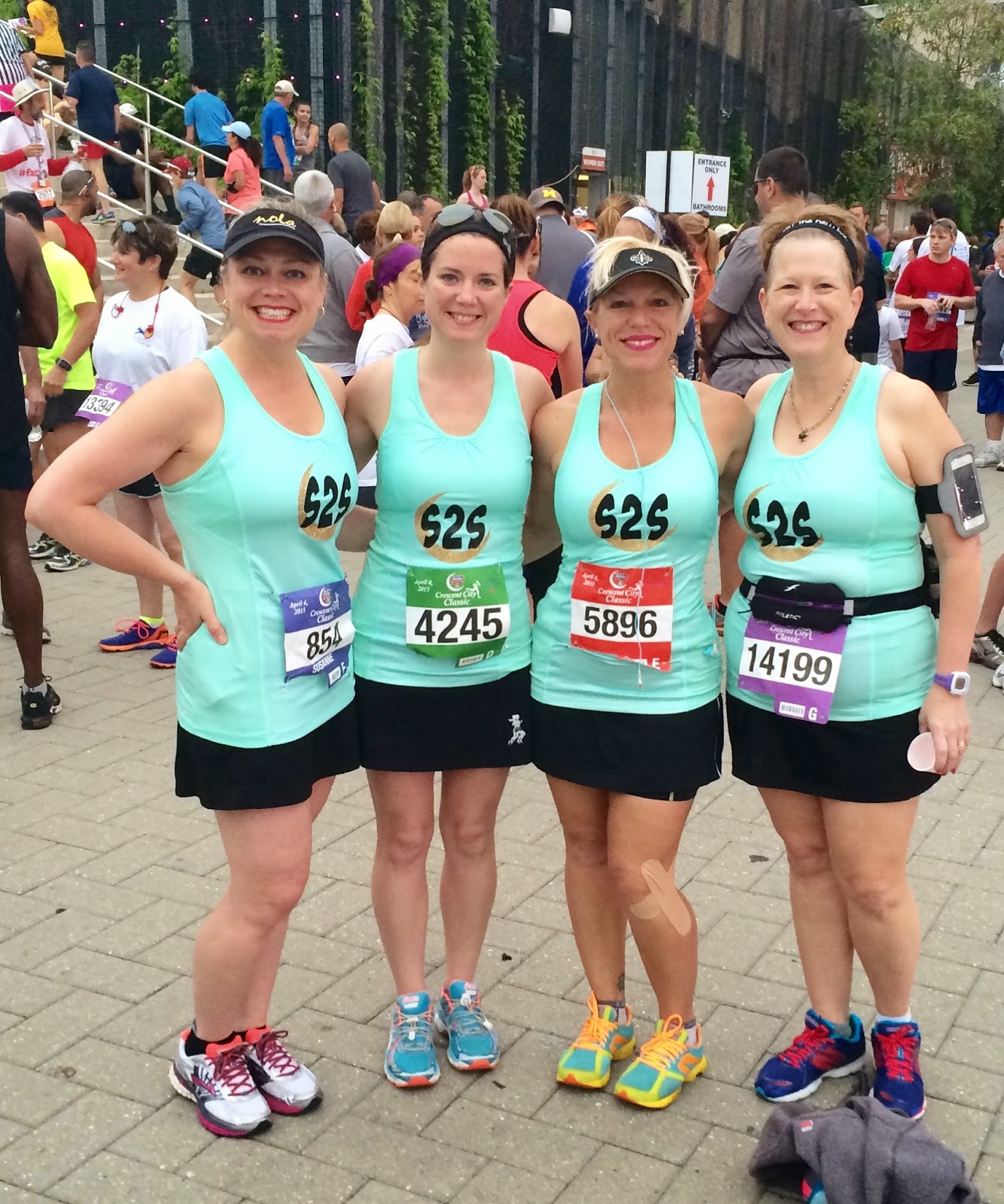 I was supposed to meet the other Crescent City Classic bloggers at the start line for a group picture but I couldn't get through. They were only letting the seeded runners go in. So I was sad about missing that picture. :-( But I did run into Heather! 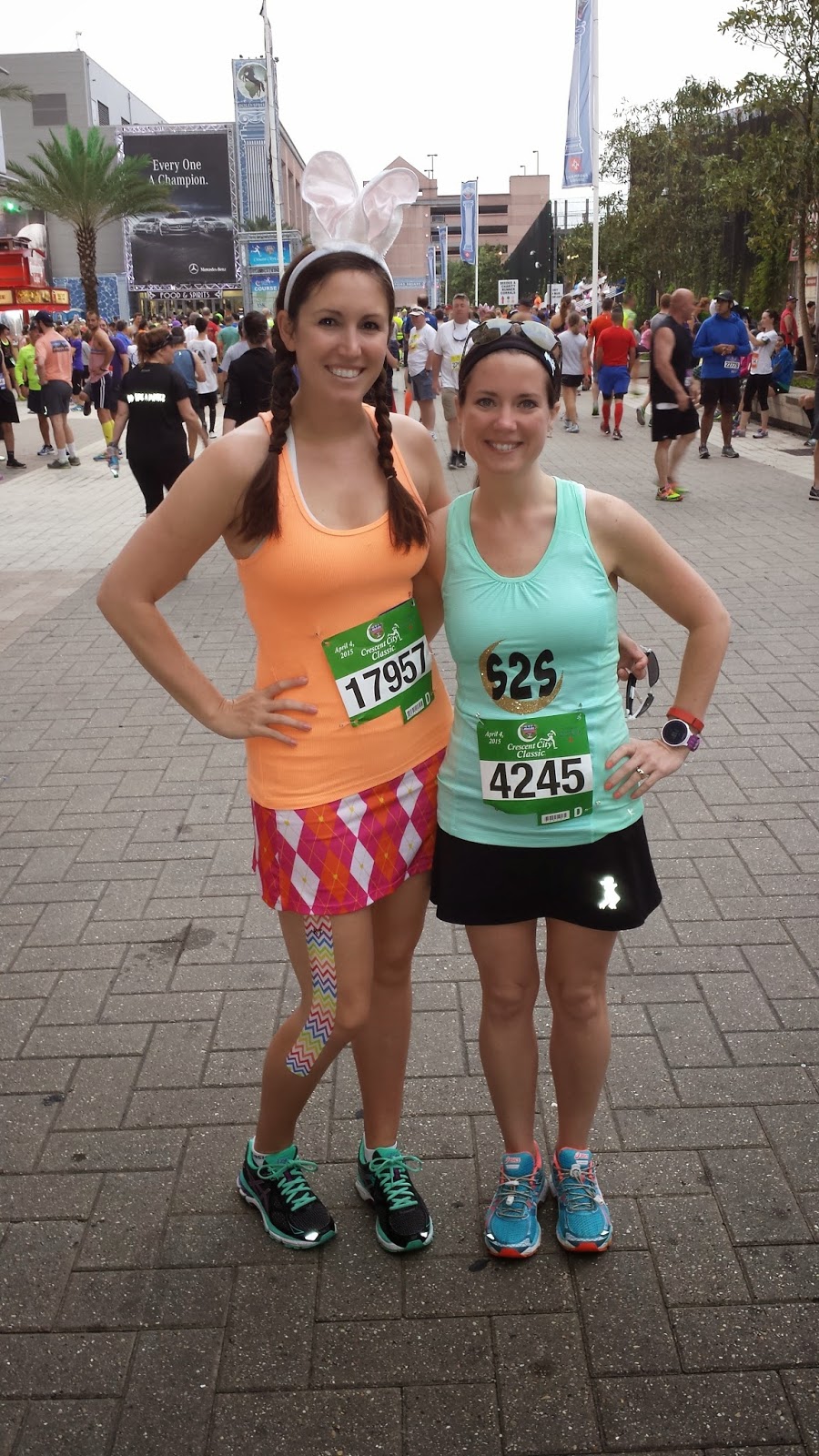 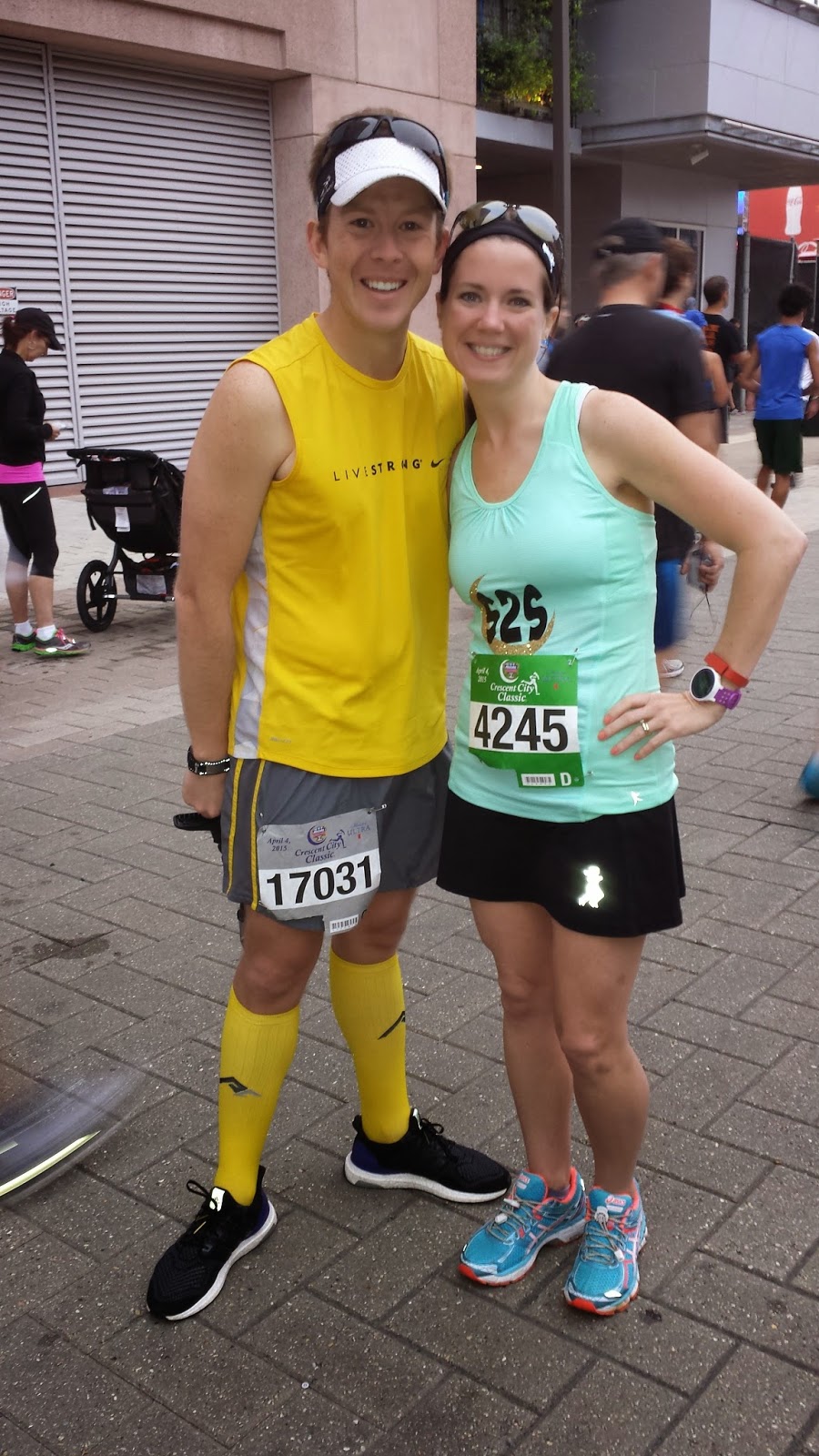 The time passed quickly and it was time to head to our corrals. I said goodbye and good luck to my friends and headed to corral D. I was excited about starting with runners that would be running my pace. I didn't want a repeat of last week and my shoe coming off again!

The weather wasn't great. It was misting rain the entire time we were in the corral and for most of the race and after. It was also windy so I was freezing in my corral. It seemed to take forever for the race to start. Luckily Mike (the race director from the expo) was the start line announcer and kept us entertained. He also gave me a shout out TWICE as my corral was easing up to the start line to start...thanks so much Mike!


You can see how the wind was blowing the start line banner! 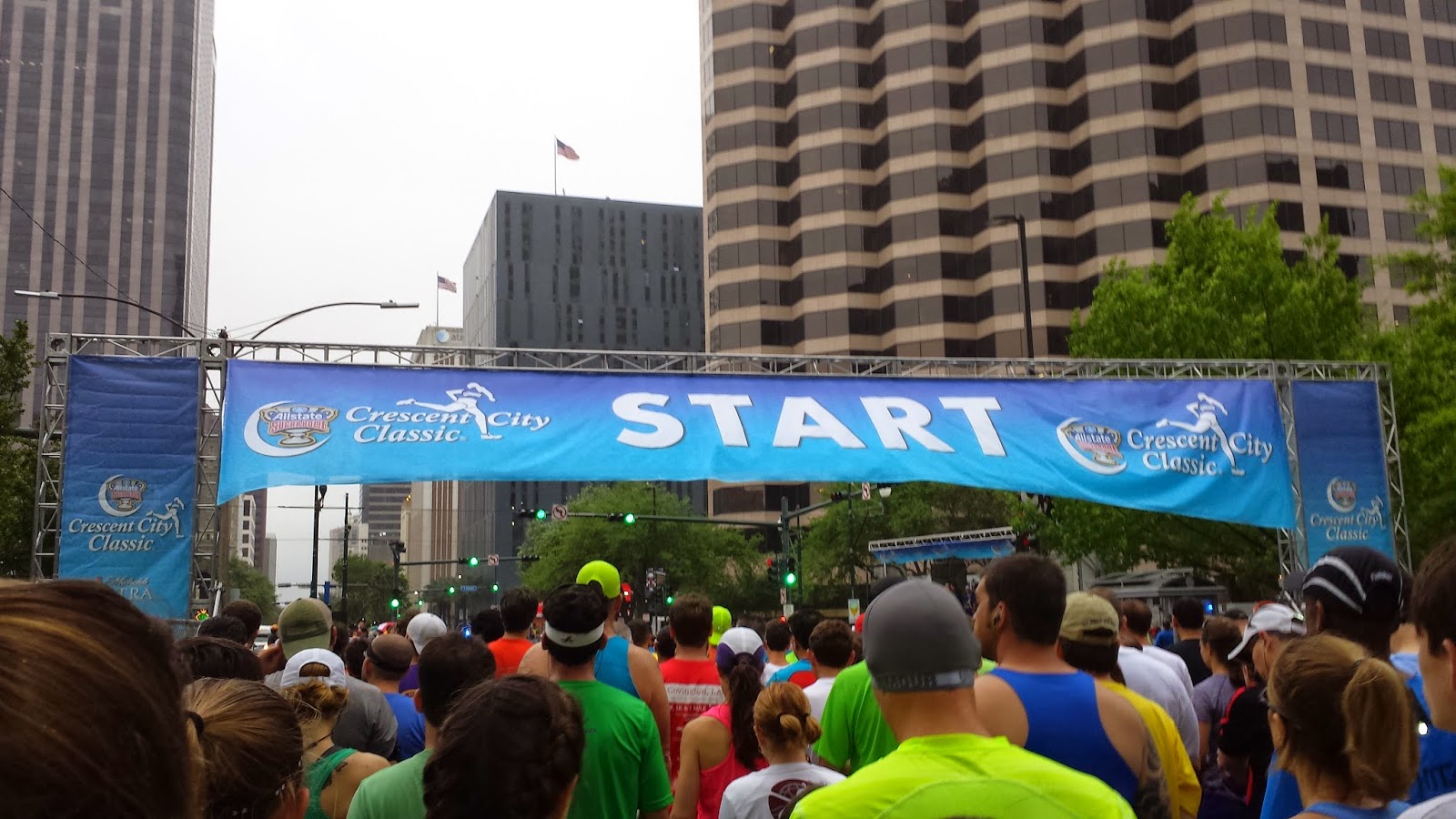 And then...off my corral went! I didn't have any goals for this race. I just wanted to run for fun. And I wanted to run the way I felt.

The beginning of the race was so much better than last week's race! Everyone was running about the same pace so there was no weaving in and out of runners trying to pass each other. It was great! The only thing I worried about were the wet streets. The misty rain made the streets slick in spots. And if you've ever run in New Orleans you know that there are potholes all over the streets so combining that with the slickness was concerning. Luckily I had steady feet the entire race and didn't fall.

Despite hardly any sleep I felt great! I was running strong and the miles were flying by! Before I knew it I had made it to mile 3! I was halfway done!

Around mile 4 I started getting a side stitch. I knew at this point that I was close to a PR. Even though I hadn't planned on one I was going for it! The stitch made me realize I was pushing myself but I wasn't going to slow down. I knew I could run through it and that's what I did.

We entered City Park and I knew I only had a little over mile to go. The finish line is almost identical to Rock 'n' Roll New Orleans. I had to go around the art museum and then I knew the finish line was not far.

I kicked into a sprint as soon as I saw it! (Not sure what the thumbs up was for...lol!) 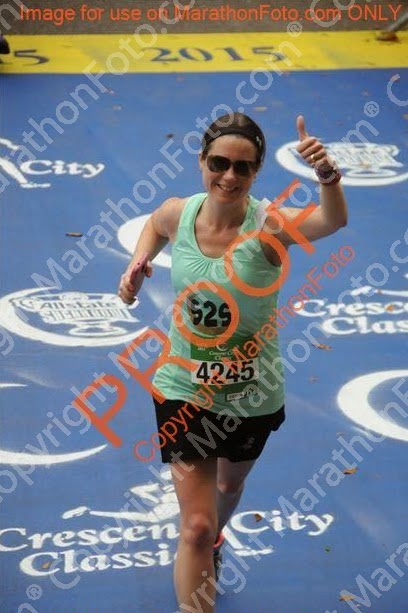 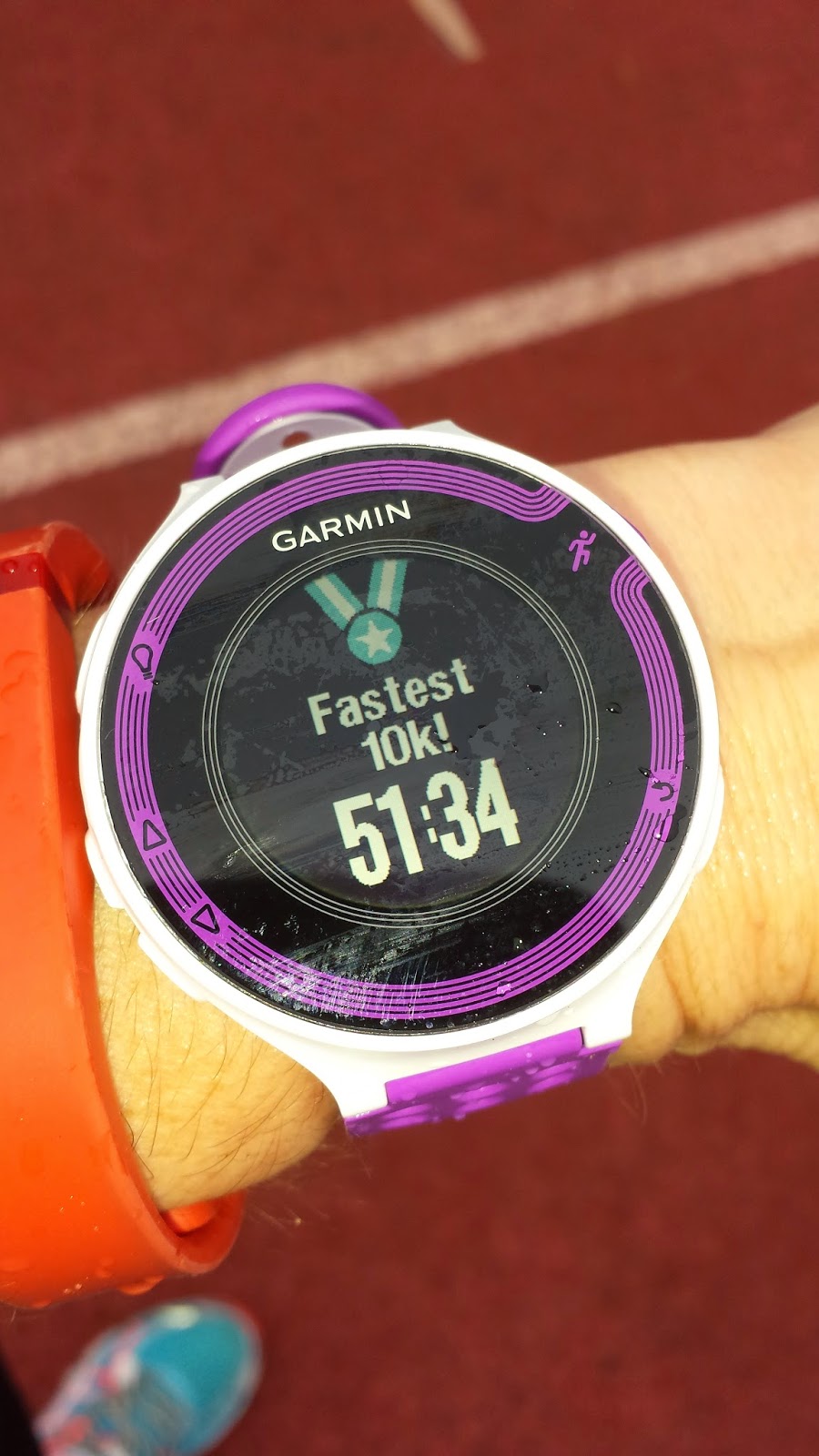 A nice guy took a finisher picture of me with my phone...I only wished he'd gotten one of me actually looking at him instead of me looking at the professional photographer. Oh well! 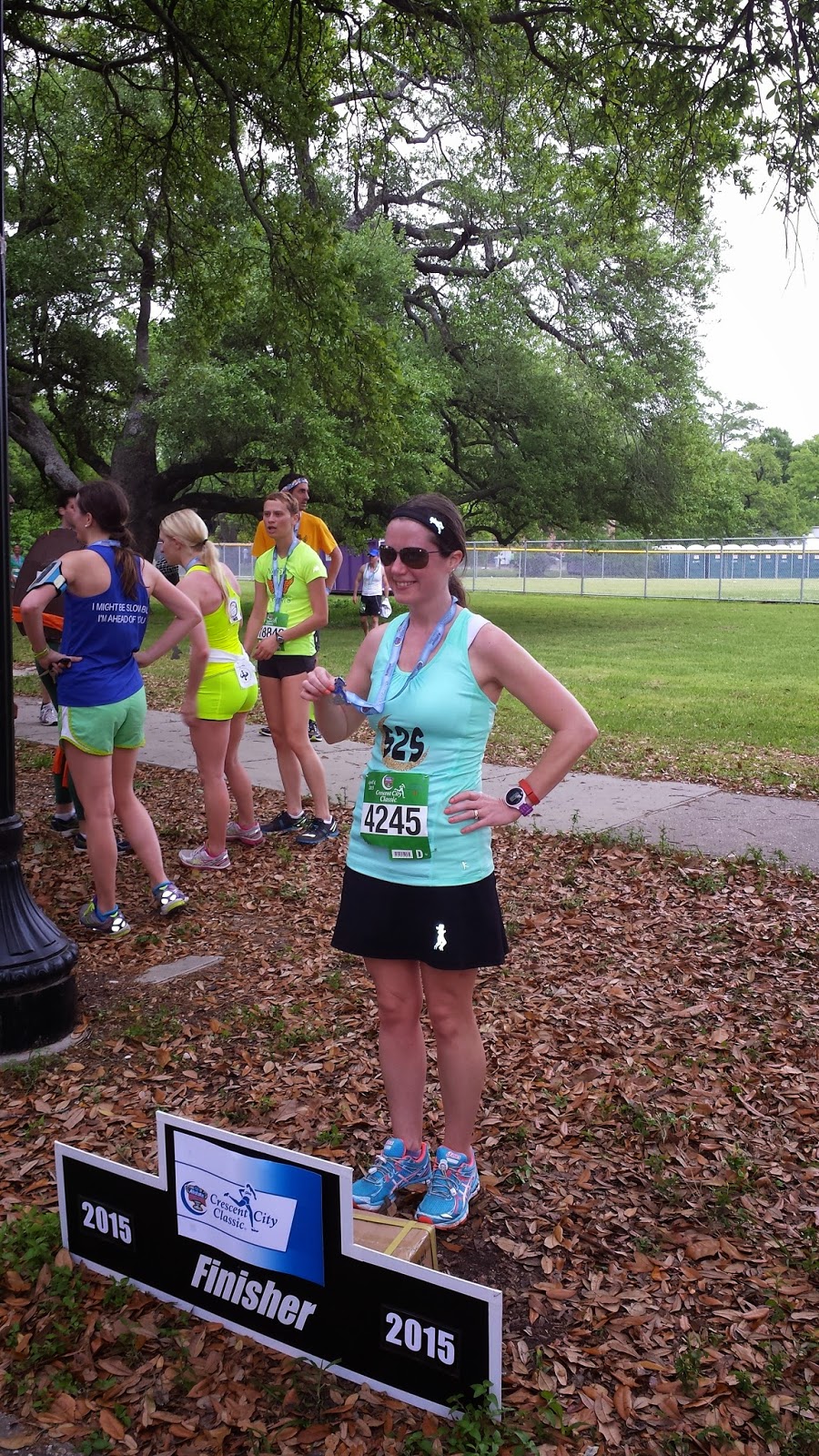 I headed to the VIP tent in the after party area to meet the other bloggers. When I got there no one was there yet! I knew Joe should be there though because he was a seeded runner for the race and super fast. I grabbed a chocolate milk and then Joe was behind me! I went and sat at a table with him while we waited for the other bloggers to trickle in. Joe finished the race in 43 minutes! So awesome!

I got to see Heather and her husband again as well as Nicole, Gina, and Jen. Not long after Paige texted me and they were done and ready to leave.

I said my goodbyes and headed out of the VIP area...as Larisa and George were coming in! I hated I couldn't stay and hang out more. But at least I got to see them some! And of course...I missed another picture! :-(

I met my friends and told them all about my PR! They are so awesome and were so excited for me! I have the best running friends ever! They are always so excited for me and my accomplishments and I'm so thankful for friends like that! 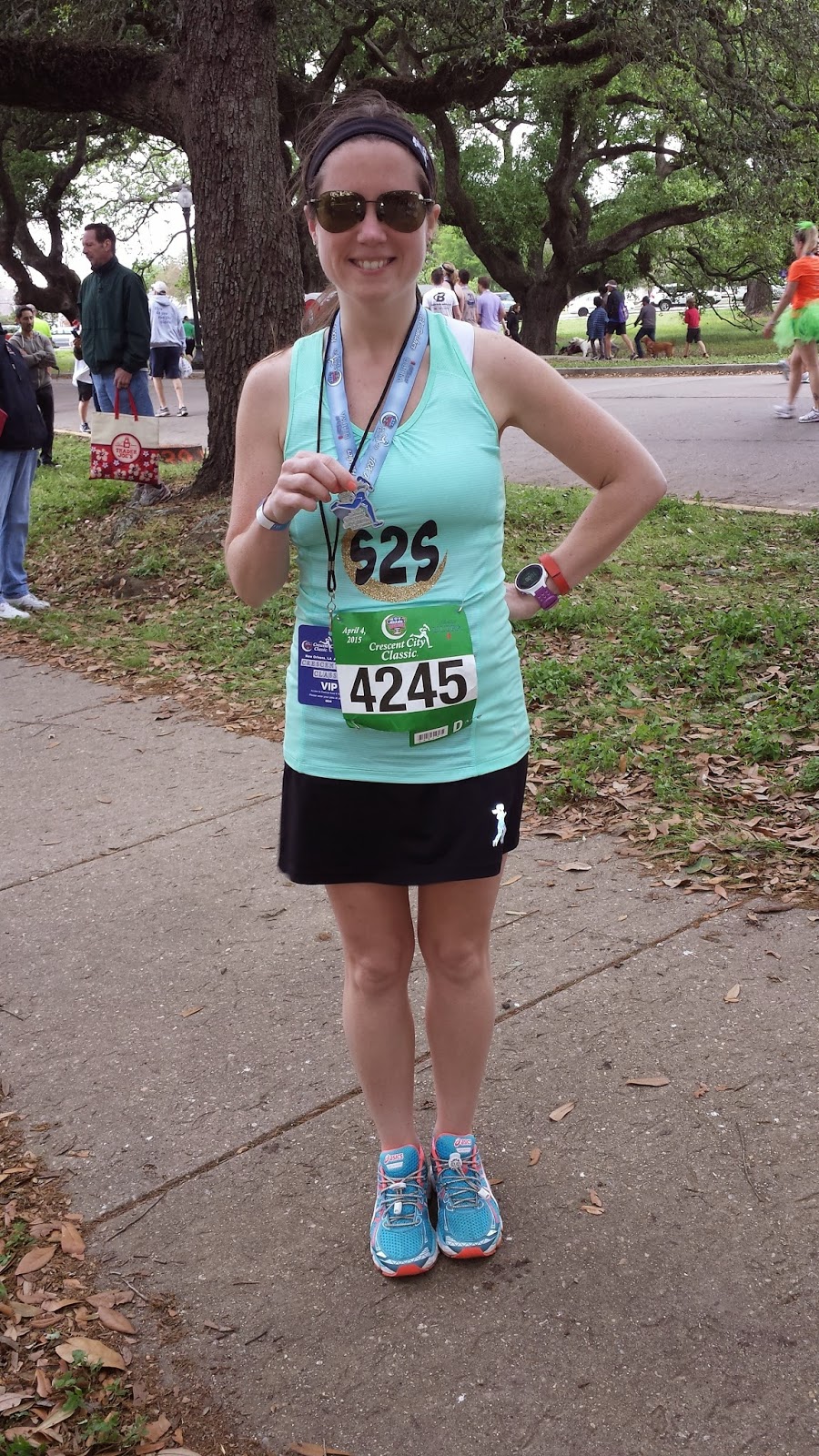 Later that night I checked the official results. I found out my official time AND that I finished in the Top 500 females! I was the 370th female to finish! I am pretty proud of that! 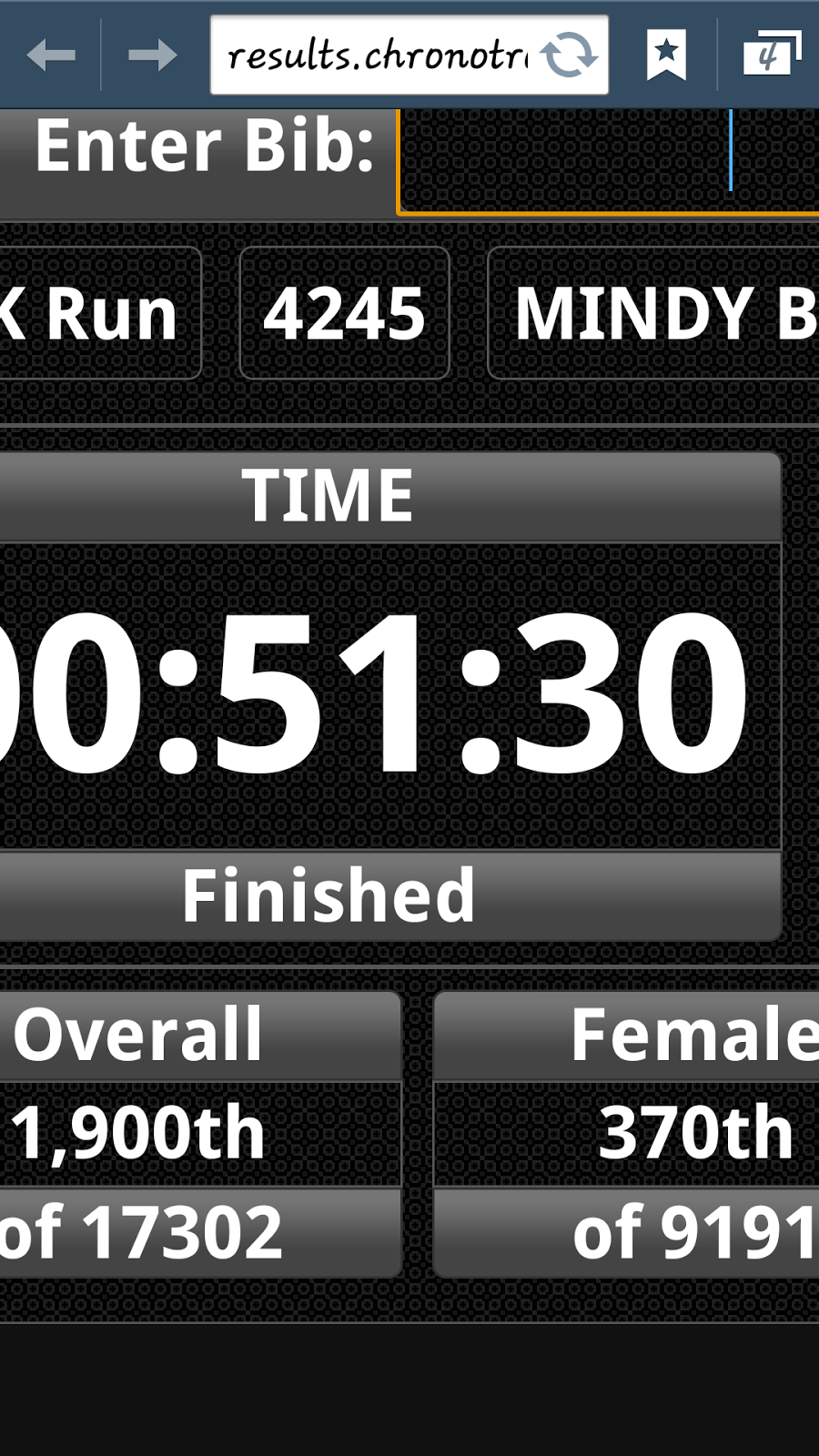 Crescent City Classic, like always, was an amazing race! It was full of so much fun and energy! There weren't as many spectators this year as there were in the past but I know that's due to the rain. They still had plenty of "beer stops" in addition to the water stops lol!

QOTD: Have you ever run in New Orleans?