This race is one of my favorite local races. I love it so much that this was my sixth year in a row running it! It is always fun running down the streets of Mobile under the canopy of the oak trees and with the azaleas in bloom! It's the perfect way to celebrate that springtime is here!

Usually the weather for this race is warm. The temps are usually in the 60's and a lot of times it is humid. But this year...it was chilly at start time! The temps were in the low 40's. So I had to rethink my tank top that I had planned to wear. I knew the tank top would be fine while I was running. But I was worried about before and after. I was so miserably cold at Seaside in a tank top before and after the race and I really didn't want to be that cold again. So I decided to wear a long sleeve shirt under my tank.

Like in the years past, I met friends early so we could all carpool to the race. We got there about an hour and 15 minutes before start time. That gave us plenty of time to head inside the civic center to use the restroom. And take pictures!

It's tradition at this race that Paige and I get this pose in! 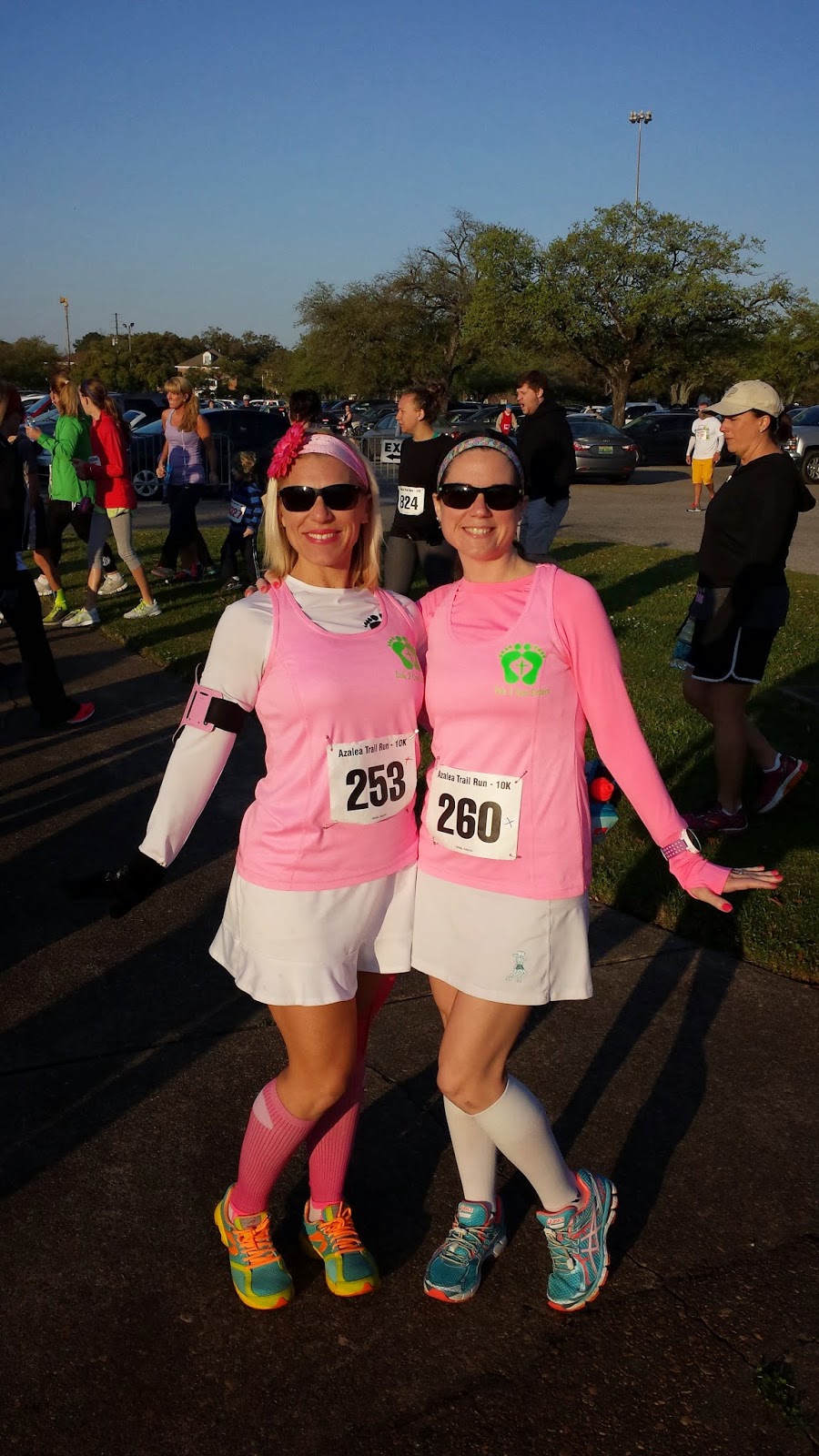 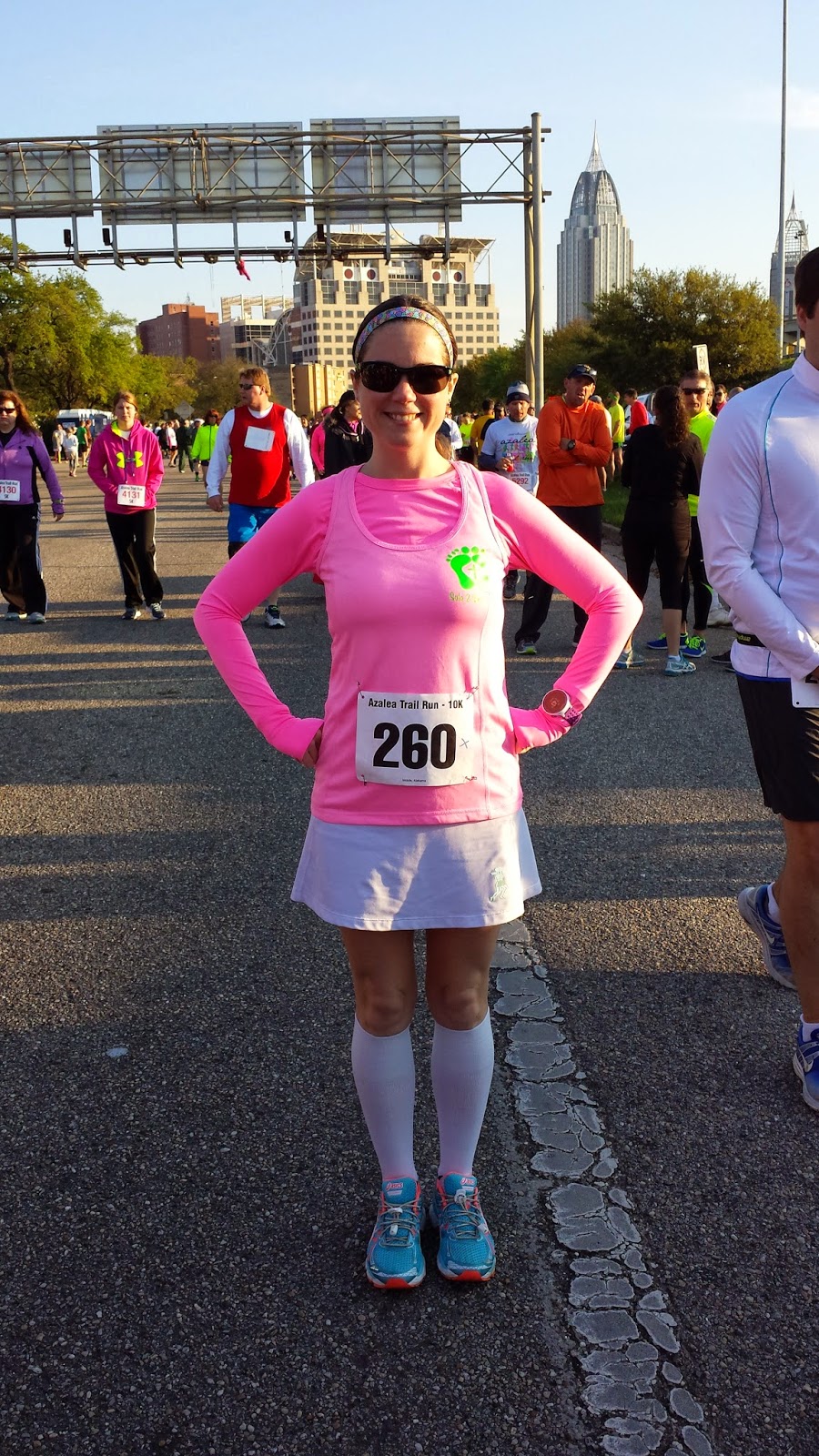 I also ran into my blogging friend Regina in the civic center! I was so happy to see her! It has been so long! She looked fabulous like always! I even got to see her for a second after finishing as well! 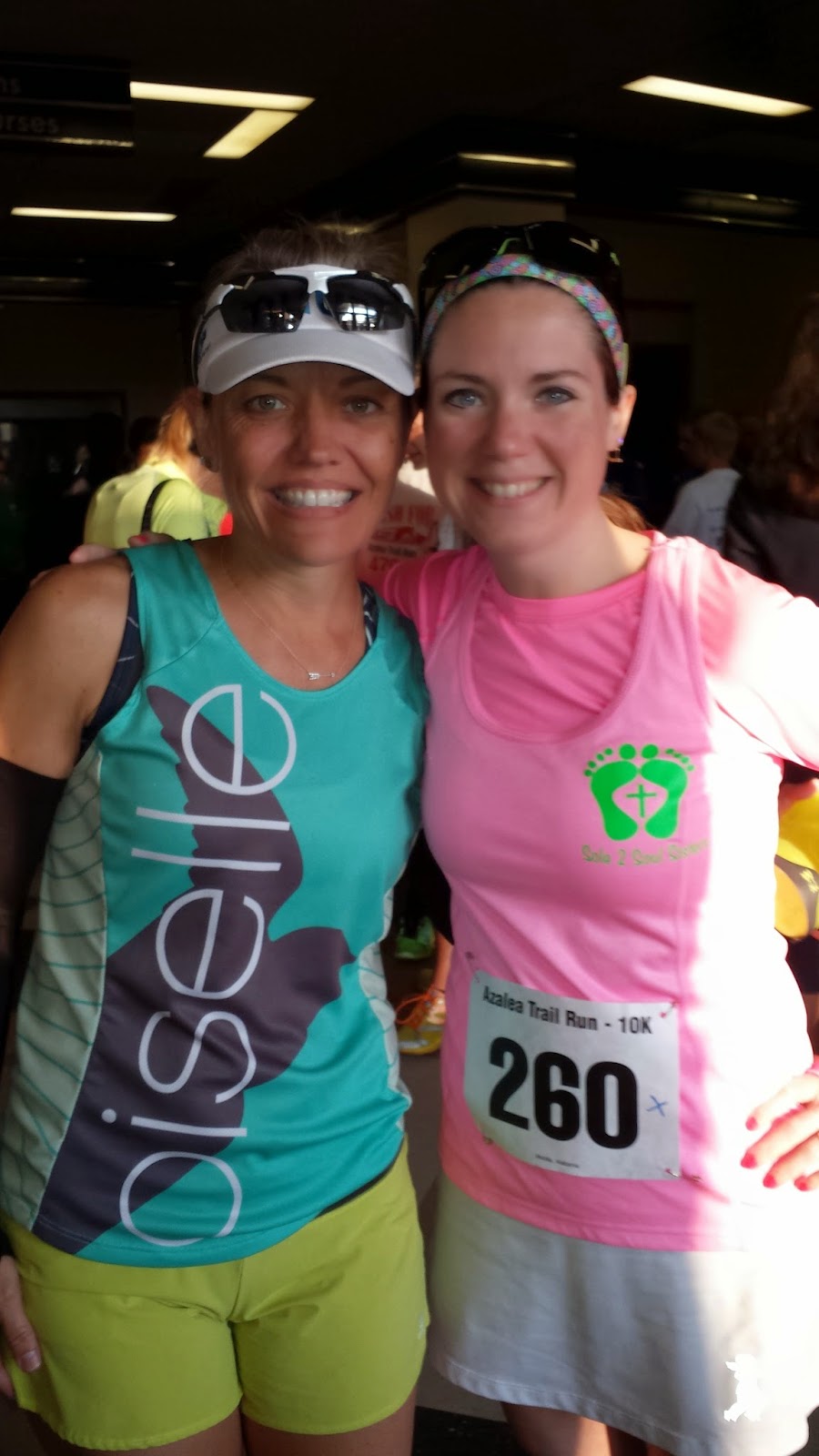 Finally it was time to head to the start line! 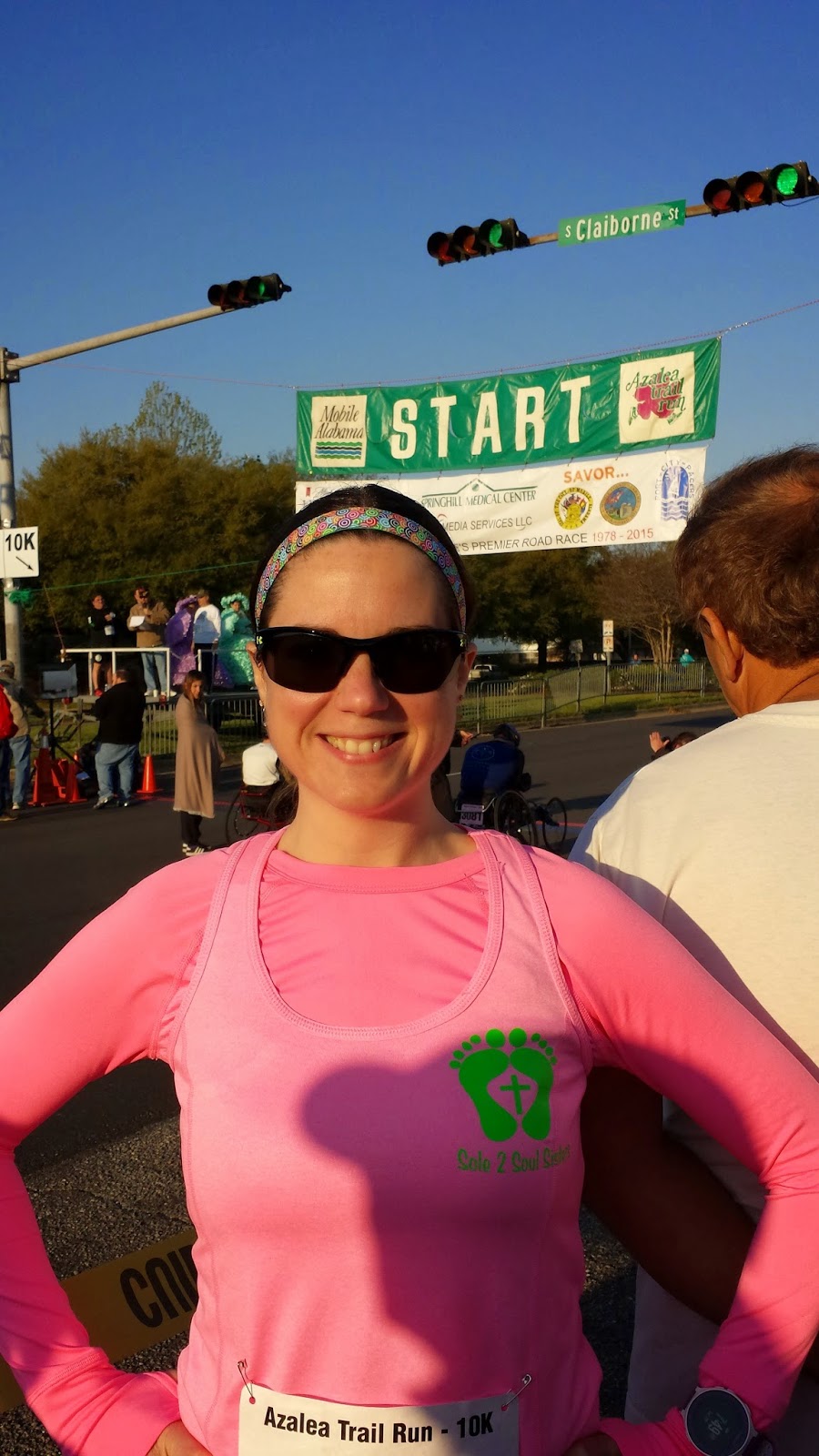 We met our Sole2Soul Sisters at the start line for a group picture and prayer! 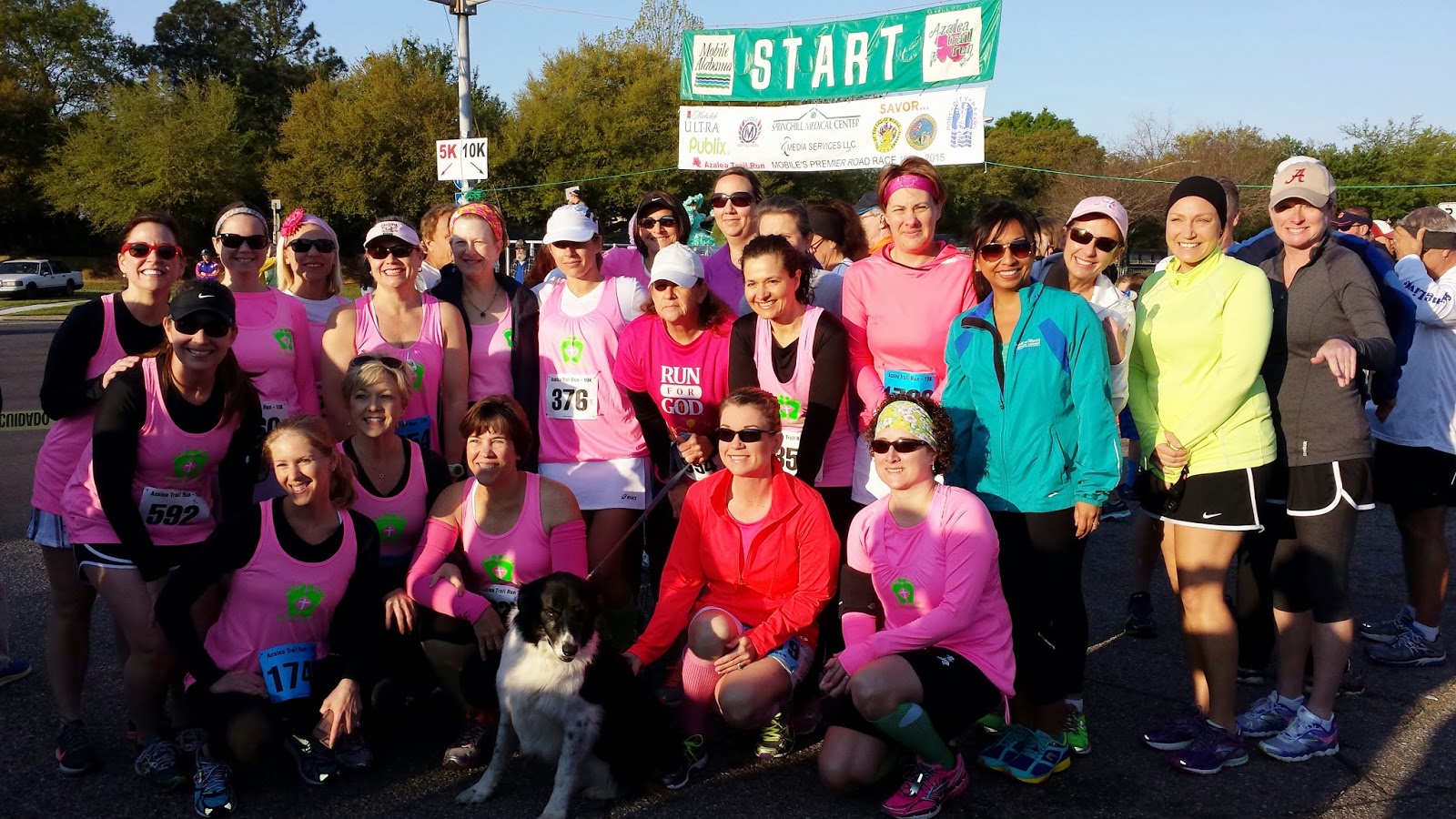 Then we headed to line up at the start. There aren't any corrals at this race. You just line up at suggested pace times. But I couldn't find any pace signs so we all just lined up wherever. And before long...it was go time!

It was super crowded at the start! Because of no corrals there were slow runners at the front of the line. There were even race walkers at the front! And they seem to all be on the left hand side. I passed so many people in the beginning. But it was hard passing them. It was so congested.

Then I saw a race walker right in front of me. I went around her....and she stepped on the back of my shoe...and MY SHOE CAME OFF!!!! In the middle of the street! I panicked! There were so many people running and I had no idea how I was going to get my shoe! Luckily a nice man stopped and grabbed it and threw it at me. I stepped to the side and quickly put it back on (thank goodness for Lock Laces) and then I was back running again. Crazy!!!

I hadn't been running long and I heard someone to my left say my name. I knew instantly that it was Jenny!!! We've been following each other on Instagram for a while now and have wanted to meet each other. She lives in my town and it seems like we have so much in common...including the same running pace! She saw my shoe came off and realized it was me!

Thanks to Fleet Feet Sports in Mobile for taking these pictures! :-) You can see how much fun we were having! 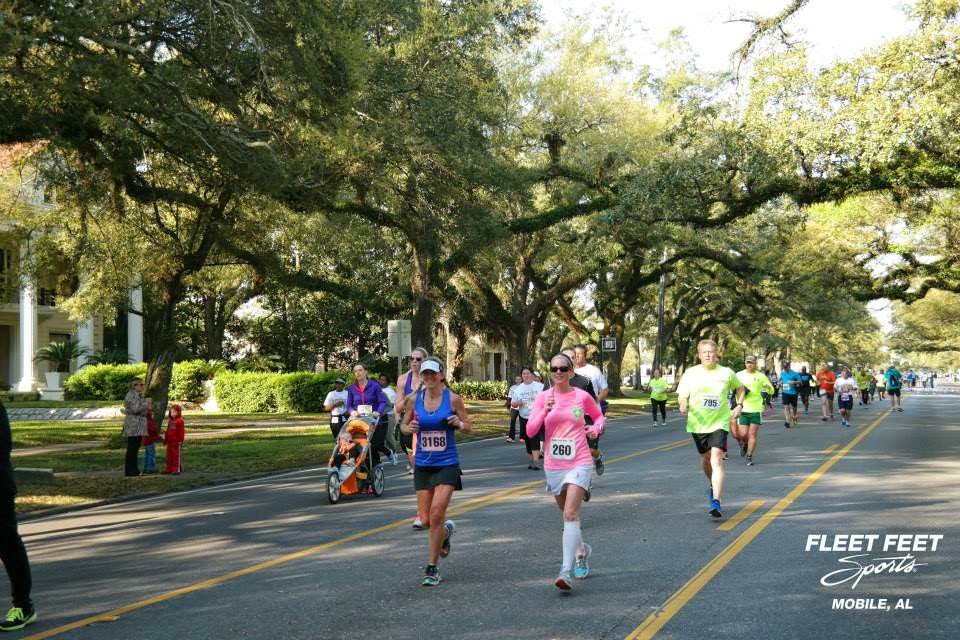 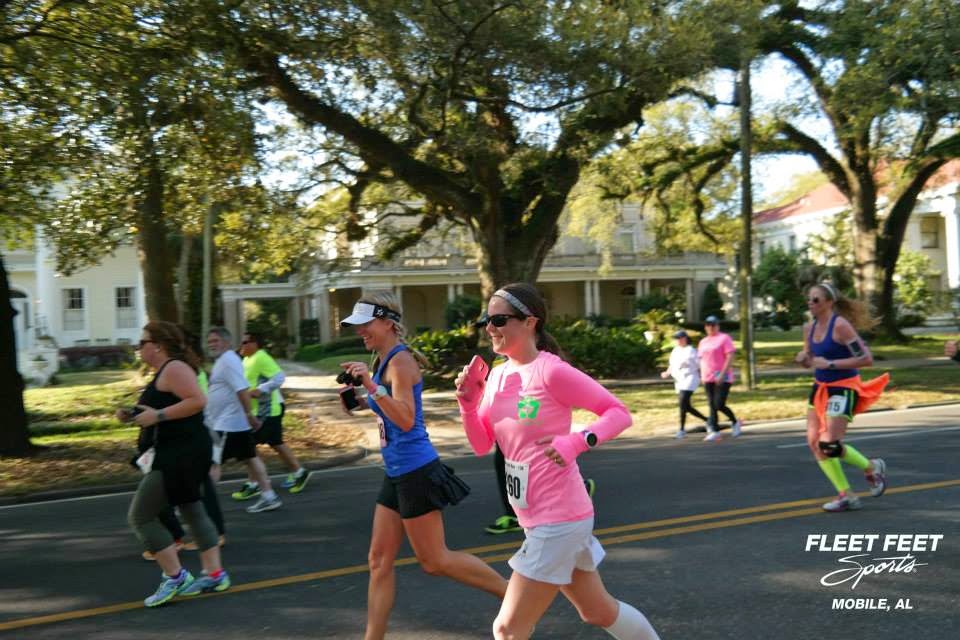 Before I knew it, Jenny said we were almost done. We were at mile 5.6! I couldn't believe it! The race was almost over and it felt like we had just started!

We could see the finish line up ahead. And then I saw my amazing photographer friend Tim up ahead taking pictures! He took a great shot of me and Jenny! Thanks so much Tim! 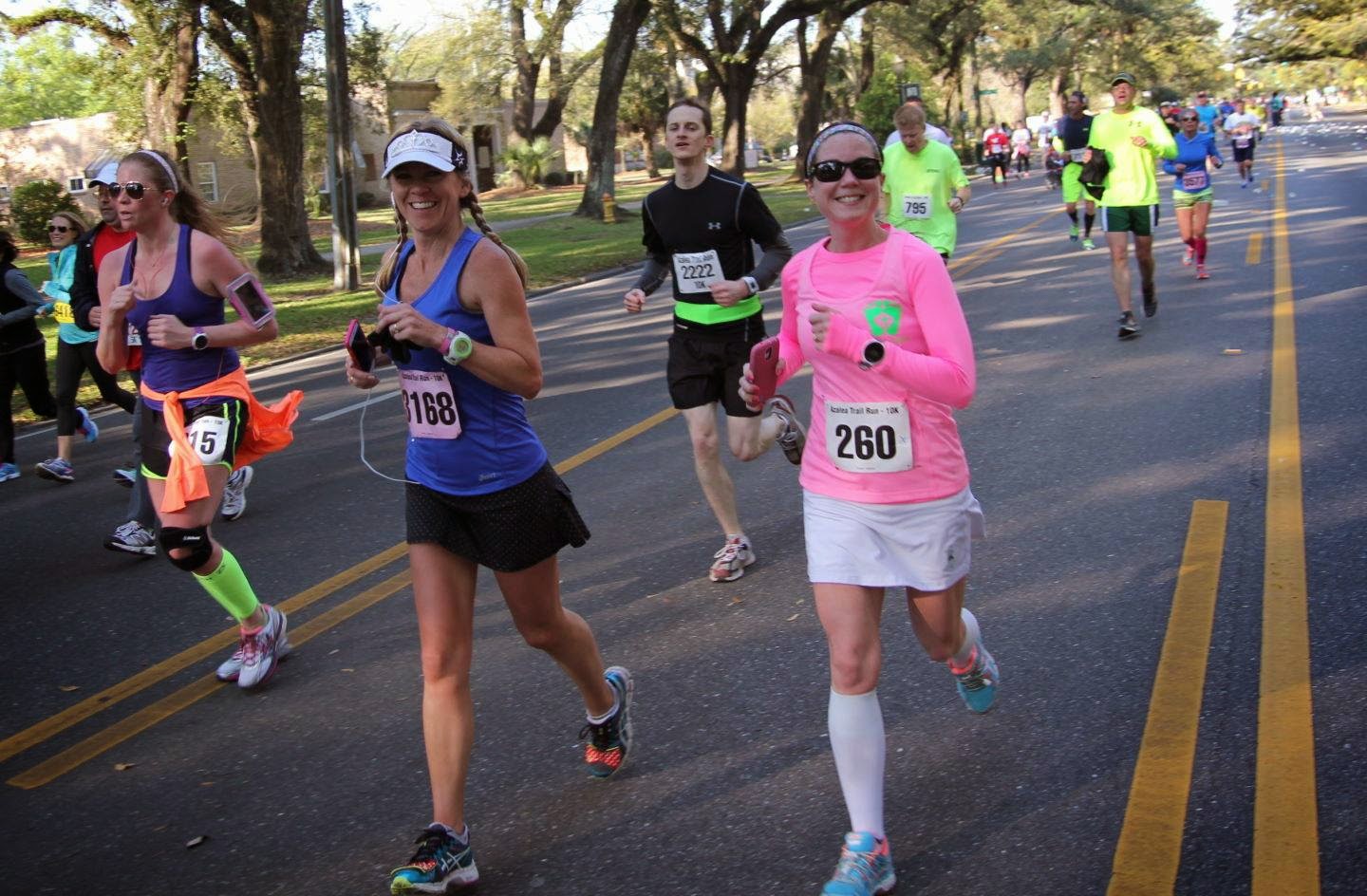 The finish line came quick! It was pretty congested though because the 5K runners were coming in at the same time. Jenny and I finished side by side and with huge smiles on our faces! We looked at our watches...we had both PRed!!!!!! My official time was 52:30...a 2 minute PR for me! 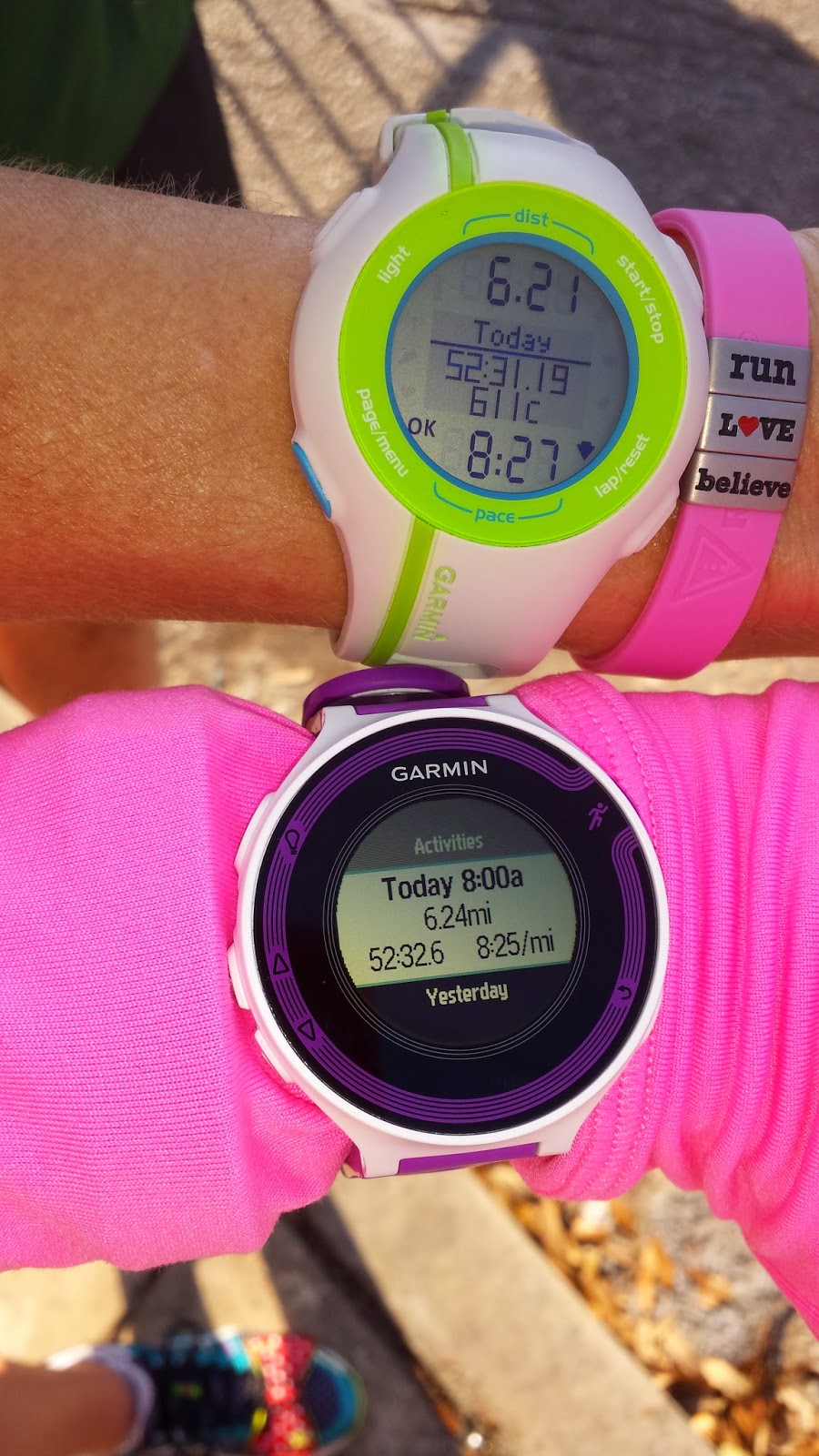 Of course, we had to get a picture of the two of us together after the race too! 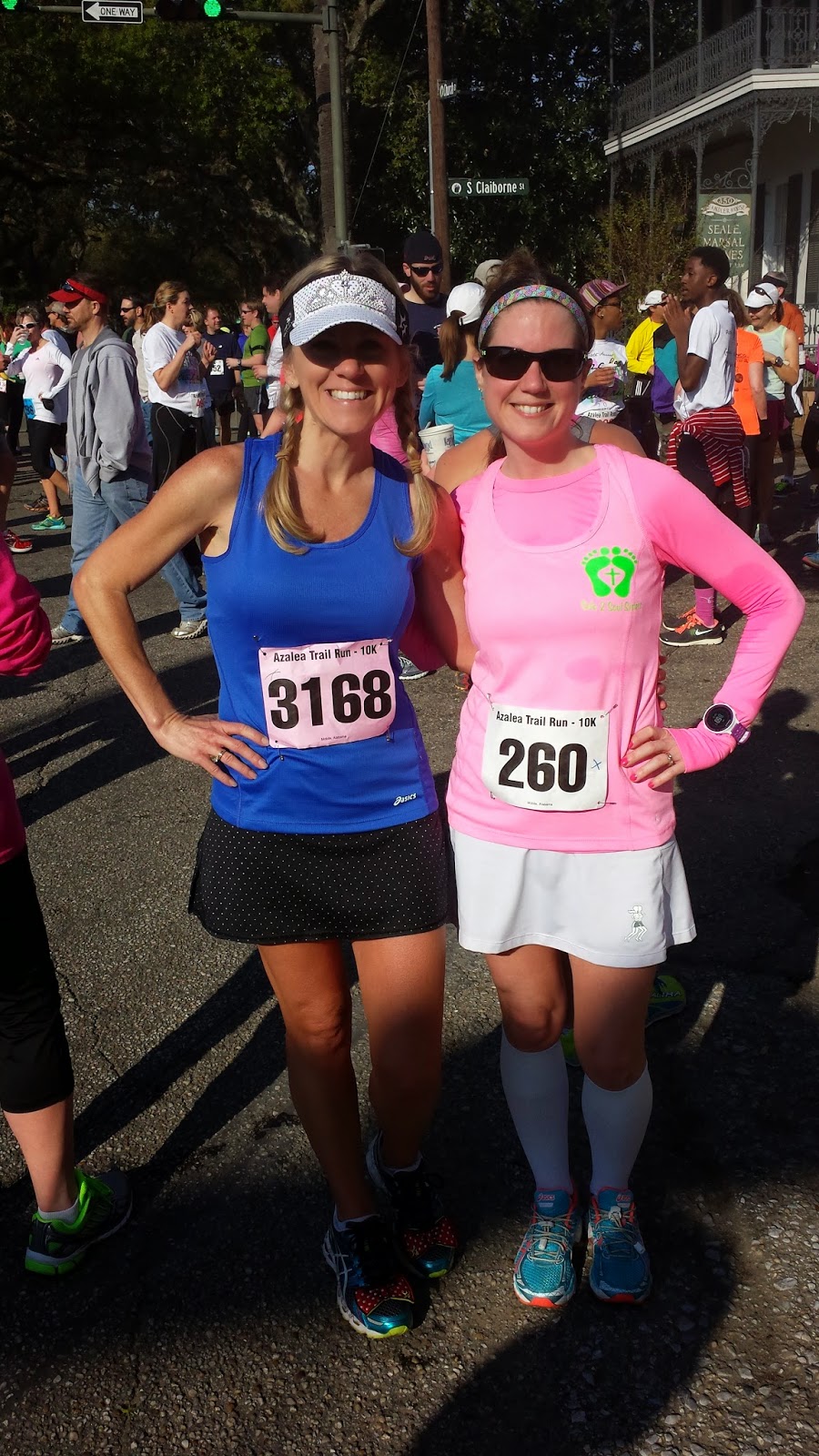 We found Jenny's husband (who was super nice as well) and talked some more. Then I found Susanne (who I rode with)! Tim saw us again and took another picture! Thanks again Tim! 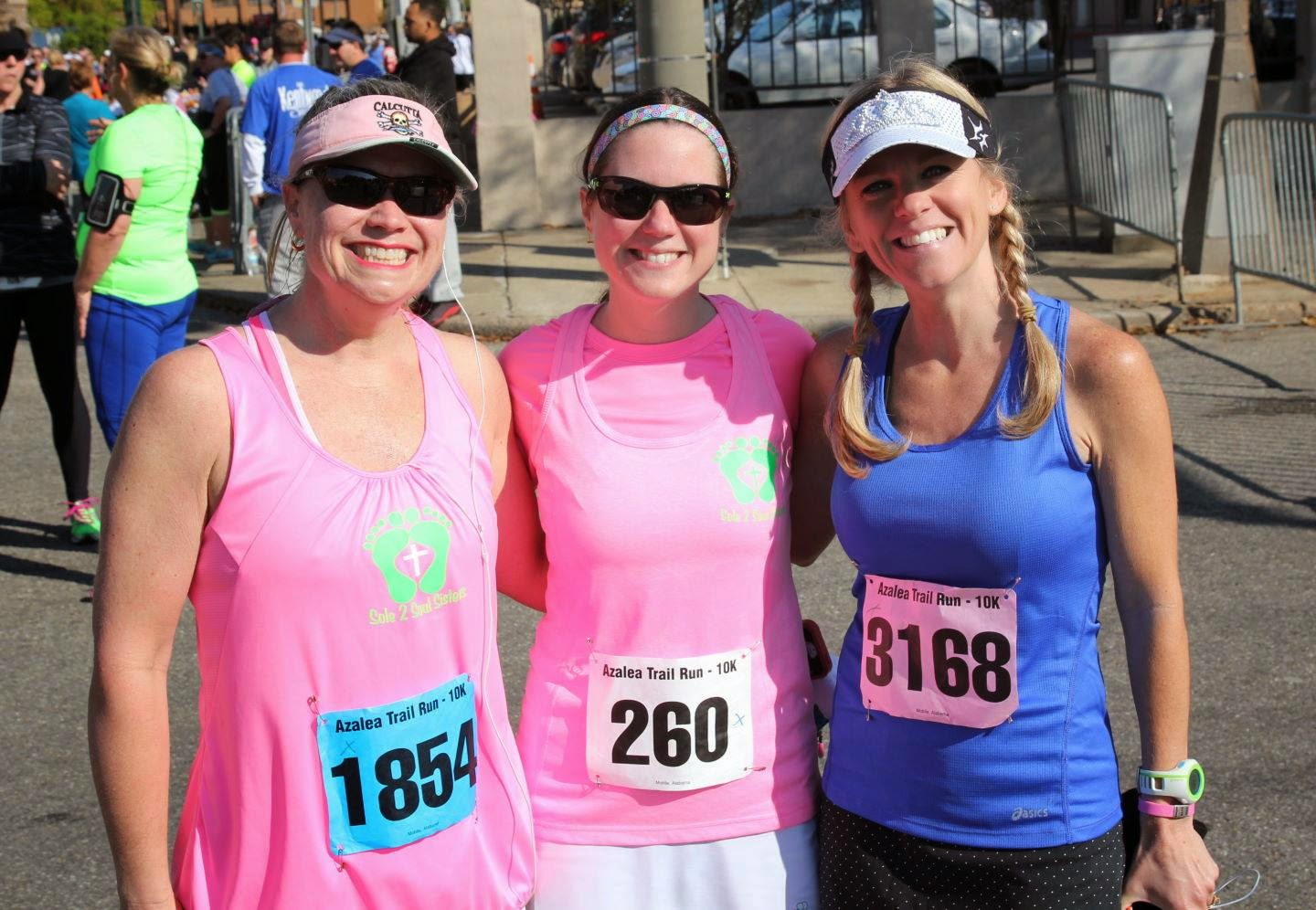 After some chocolate donuts (YUM) we headed towards the civic center. The fun thing about this race is that the expo is still open so you can still shop around if you want. We wanted some of the red beans and rice and cheese grits that they were serving though. So we headed that way.

Too soon, it was time to say goodbye to Jenny. I am sooo glad we found each other on the race course! I truly believe God allowed my shoe to come off so that we would meet! :-) I loved getting to know her better during the race! Hopefully we will meet up again!

Susanne took one last picture of me celebrating my PR! 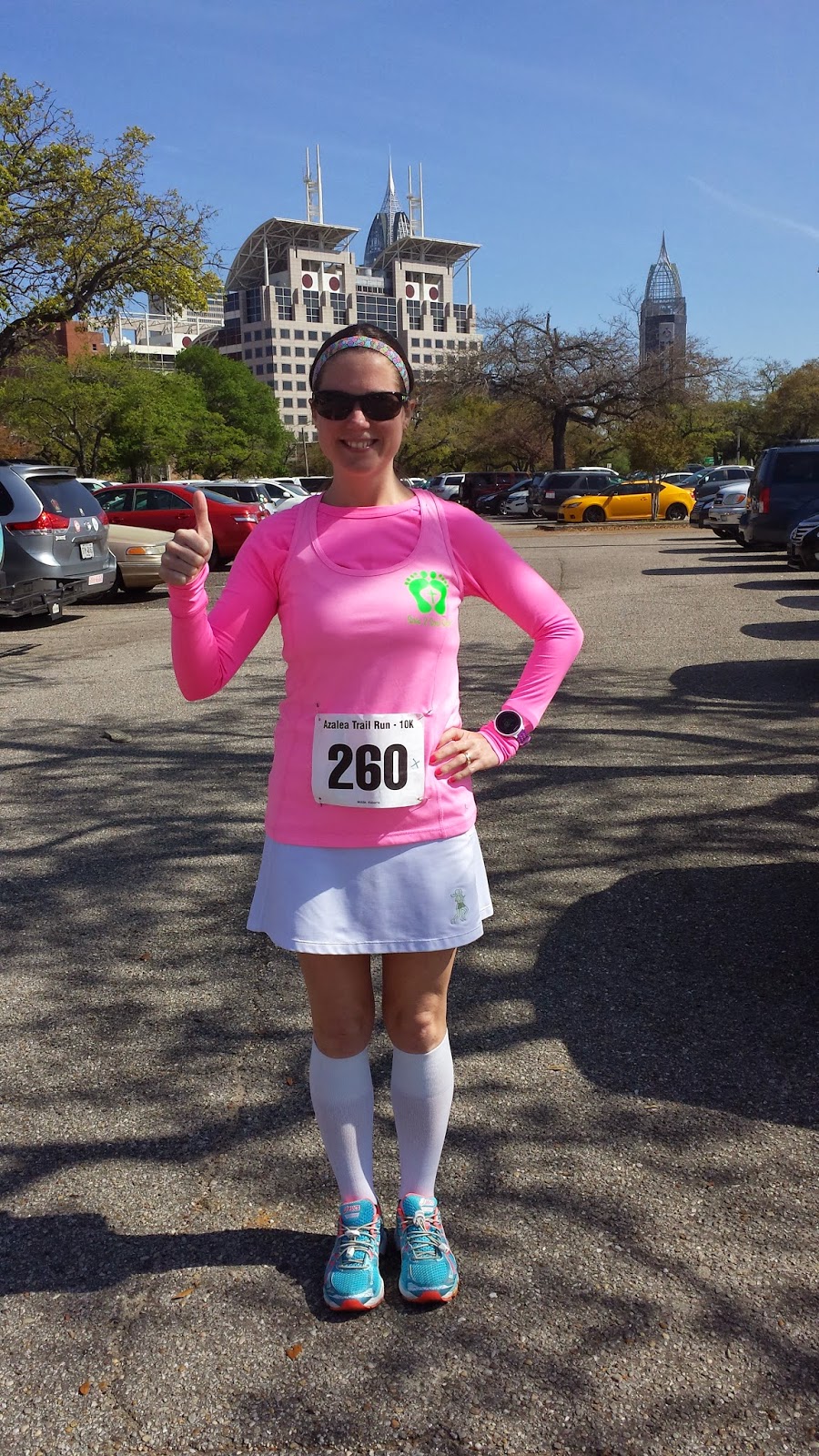 This was such a fun race! I can't believe how fast it flew by! And...of course I will be running it again next year! :-)

QOTD: Have you ever lost a shoe in the middle of a race? What is the craziest thing that's happened to you during a race?