This is one of my favorite local races! It also holds a very special place in my heart because it was my first ever 5K! I remember that day so well! I also remember being so inspired by the runners who ran the 10K and thinking that I would never be able to run that far! Well...this was my 4th year running this race...and 3 out of those 4 times I have run the 10K!!!! :-) 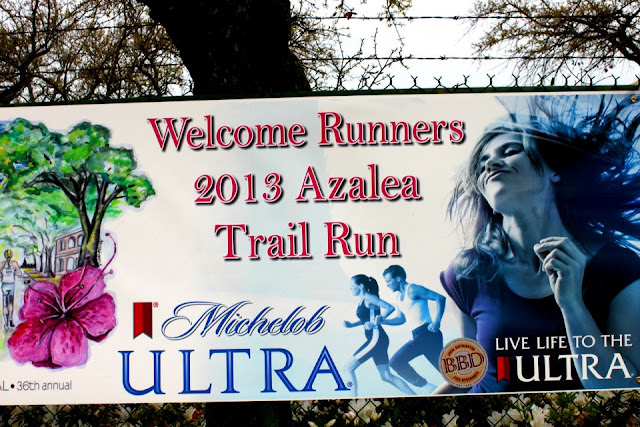 (Thanks to my friend Dana for this picture!)

The day before the race I headed to Mobile to pick up my race packet. 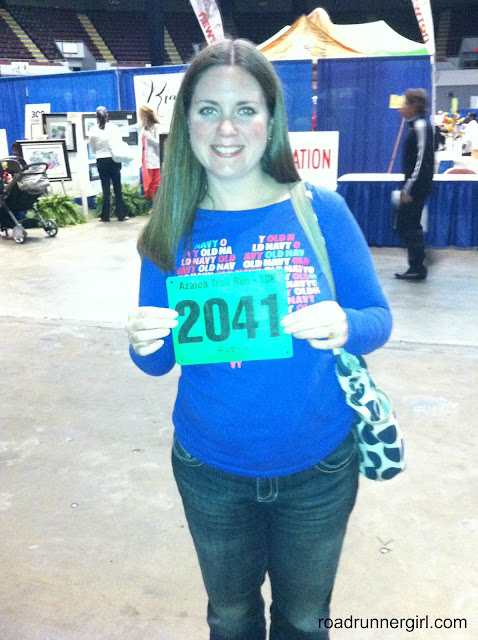 The expo is held in the Civic Center. There aren't a ton of vendors but it's still a fun expo to attend.

I got to visit with Dr. Justin some (I haven't seen him since he released me from my knee injury).

My boys visited the Publix booth and got free bananas (they were super excited about this)!

I got to visit with Missy from Running Wild Fairhope...one of my favorite running stores.

Even Swiftwick was there!!! I was super excited about that since they are my favorite socks to run in! And the Swiftwick vendors were super nice and even gave my boys a Swiftwick wristband! 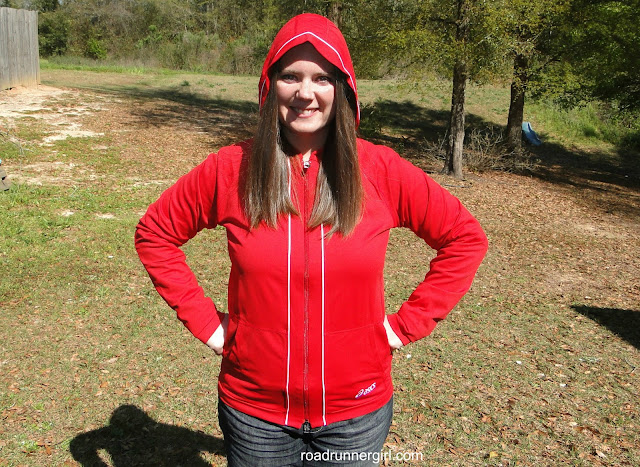 While shopping I ran into Robbie from Run 4 It! Robbie and I have been Facebook and runner friends for years...but we have yet to meet! She recognized my boys first and then found me! I was sooo excited to finally meet her! She is such an inspiration and one of my best encouragers! 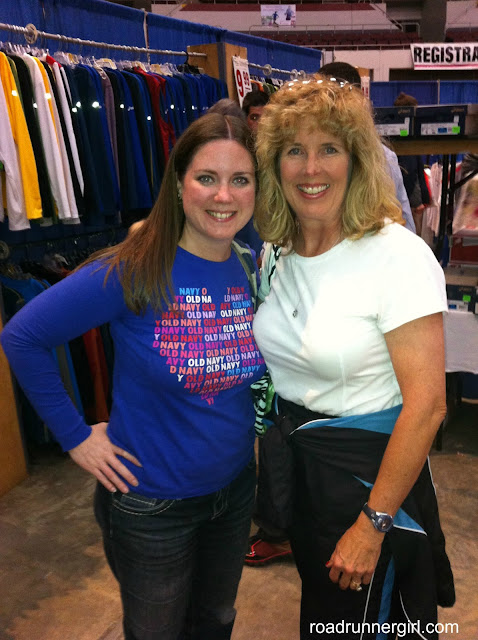 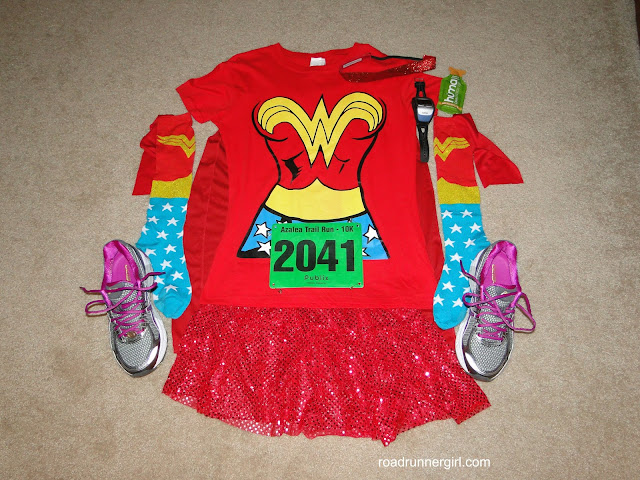 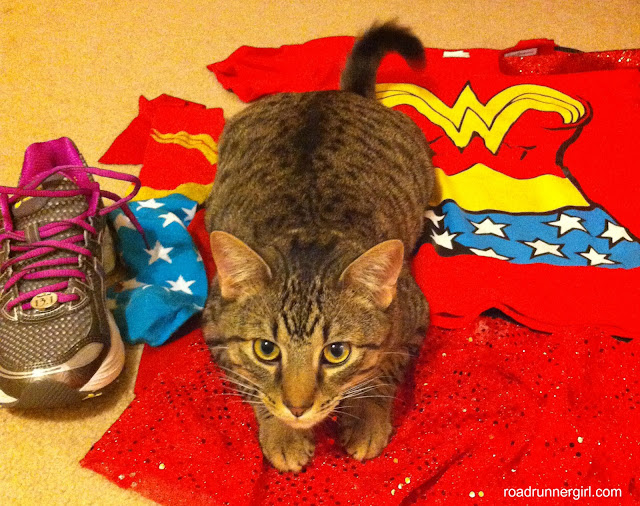 I got tons of comments about my outfit! I was dressing up as Wonder Woman for this race. In fact, all of my Sole2Soul Sisters were dressing as superheroes for this race. Why? Because this race benefits the Superhero Foundation of Mobile, AL. This organization is all about fighting child abuse. 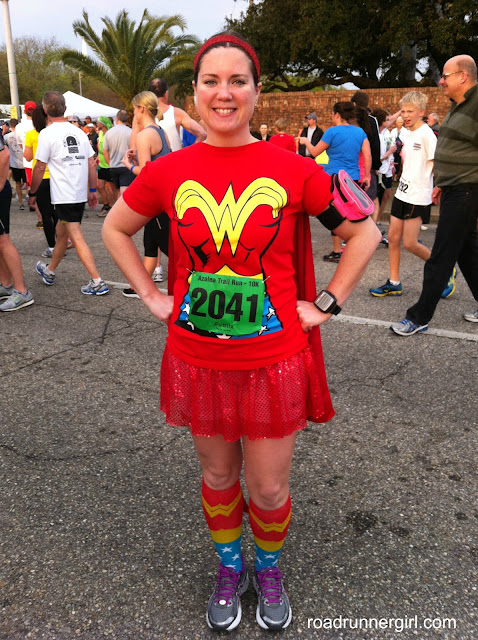 Race morning we all met up early to take pictures and carpool to the race. We had a ton of Sole2Soul Sisters dress up!!! (And this picture doesn't even include some of them) 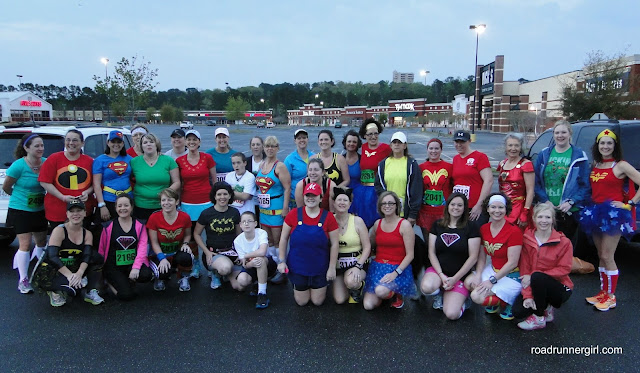 And here's my picture with Paigey (if we are running a race together we always take a picture of just the two of us...it's become a tradition)! 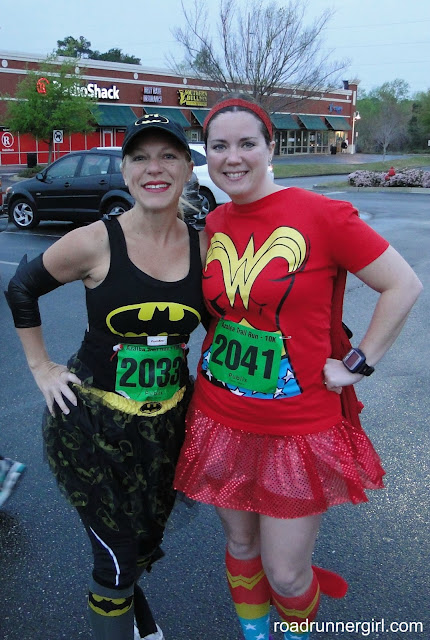 After pictures we headed to the race. After a bathroom stop and a few more pictures we finally made it to the start line!


Me and Laura...as Wonder Woman! 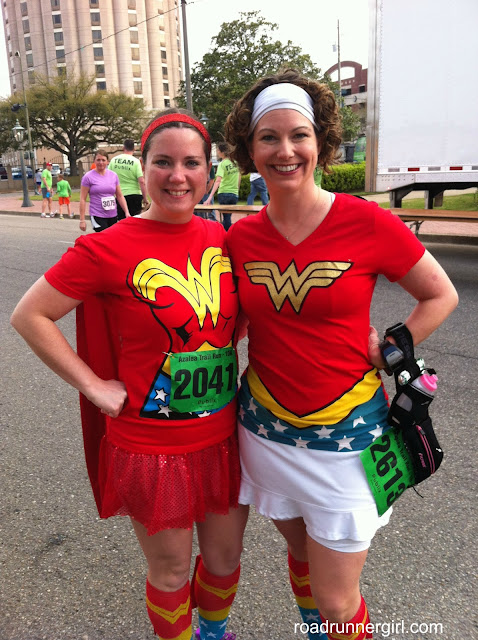 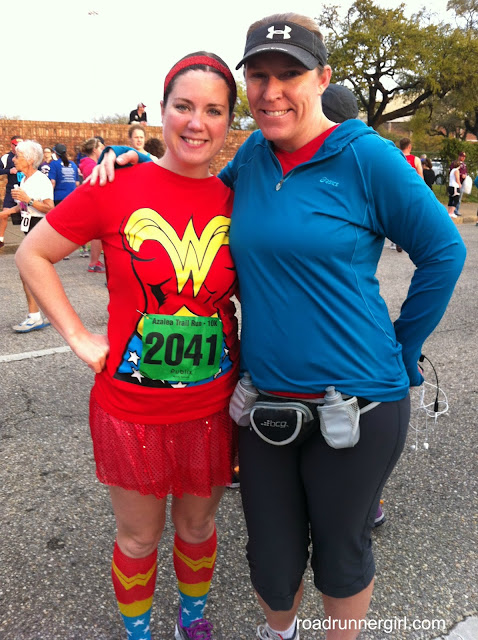 And I am always so flattered when I have people come up to me and tell me that they read my blog! I met two readers right before the race...Andrea and Leigh (who I got a picture with)!!! It was awesome to meet them AND to realize that people really do read this! 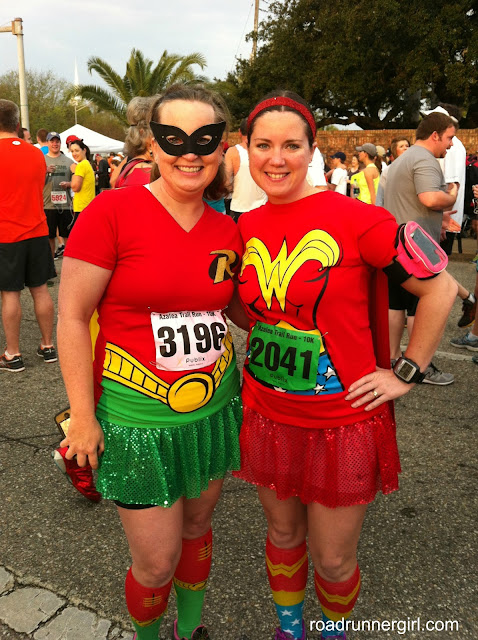 We finally lined up at the start line...and I saw several people I know on the way! I just love races...it's like a big reunion of people you may not have seen in awhile! Here's the last picture before the start...Paige, me, and Suzanne! (Thanks to Suzanne for the picture!) 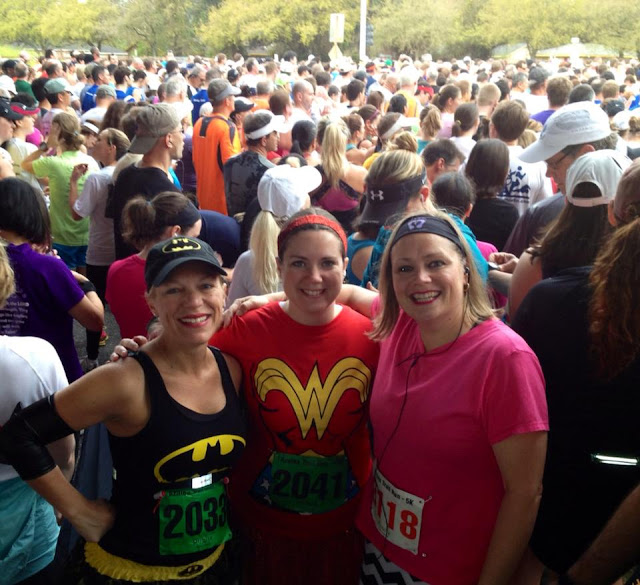 Finally the race started! I had been watching the weather all week long...they had been predicting a 60% chance of rain and we were all just hoping the rain held off until we finished the race. But because rain was moving in it meant it was hot and we had to deal with 100% humidity. None of us were used to the humidity...we had been running in cooler temperatures. And my outfit was hot! My shirt was 100% cotton plus I had a cape on the back! So half a mile in I was already breaking a sweat! I knew I could deal with it for 6 miles though so I kept on pushing. Luckily my pace partner Holly from Running and Baking Oh My had decided last minute to run the race. I also run better when she's there to push me!

Because of the humidity Holly and I stopped at every water station but the last one. I was super thirsty (although I made sure to hydrate well the entire week) and didn't want to get dehydrated. I really didn't have a goal time for this race...I was in it for the fun and costume! It was so motivating to hear all the spectators cheer "Go Wonder Woman!" Like always, Holly and I would keep trying to slow ourselves down. We didn't want to run too fast and too hard and not have enough energy to get us to the end. But we struggled with our pace like normal and one time I looked down and we were running in the late 8's! We knew we'd never make it at that pace!

The first 4 miles were hard for me like they always are. I feel like I say that for every race! But I just don't get warmed up until then. So around mile 4 I was feeling great and I downed a Huma Gel and could really feel it when it kicked in!

They reversed the course this year so it made the race feel totally different than in the years past. We could see the finish line from about mile 5 so it made it feel like we would never get there. But finally we got close and I kicked it into high gear and started sprinting!

Thanks to my Sole2Soul Sister Bonita for this picture of me racing to the finish line! 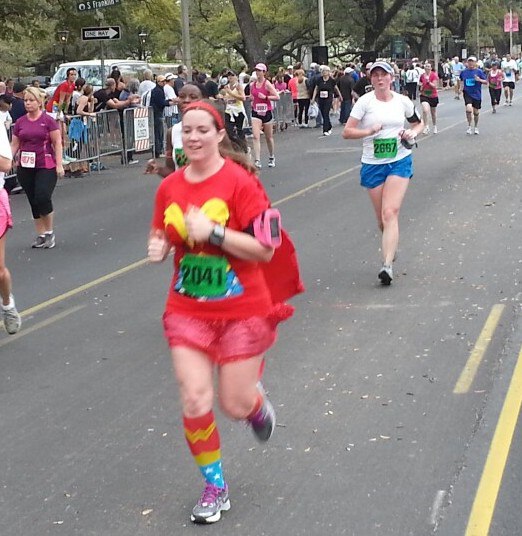 I finally made it! My official time was 1:05:26! (Yes..it took me almost a minute to cross the start line...there were about 6000 runners there!) It wasn't a PR but it was faster than last year's time at this race so I was happy! 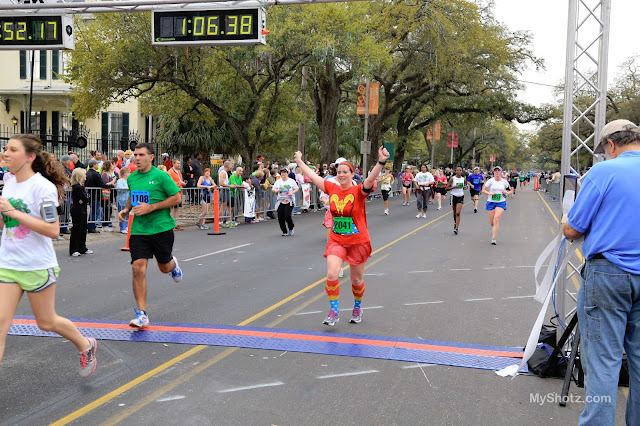 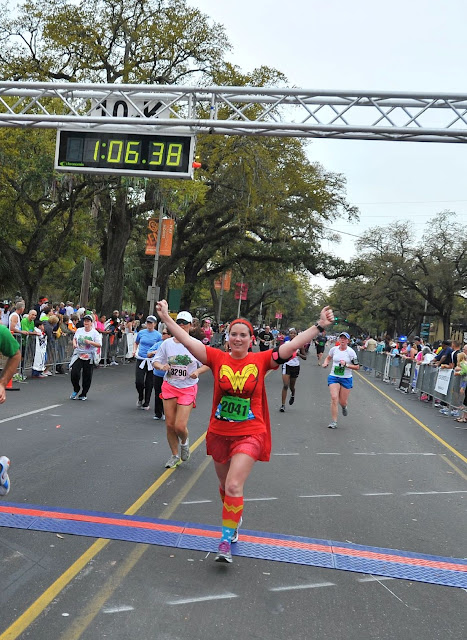 After finishing I headed to find some water and food. They had bottled water, bananas, apples, and muffins to choose from. Holly and I grabbed our goodies and headed back to the finish line to see the rest of our Sole2Soul Sisters finish.

Me and Holly waiting at the finish line! 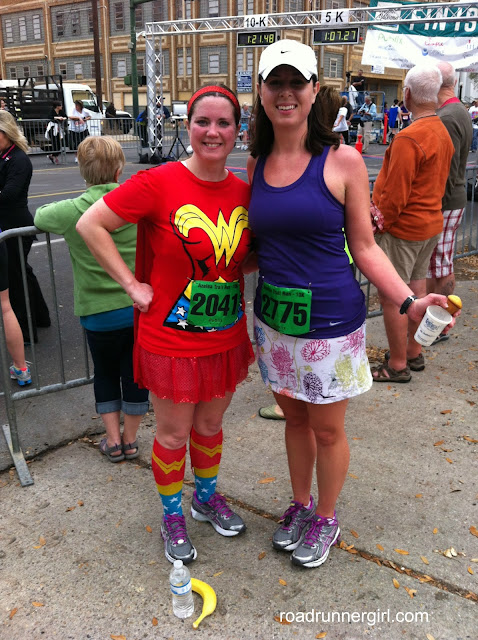 I was so excited to see Stephanie finish! It was her first 10K and she did awesome!!! 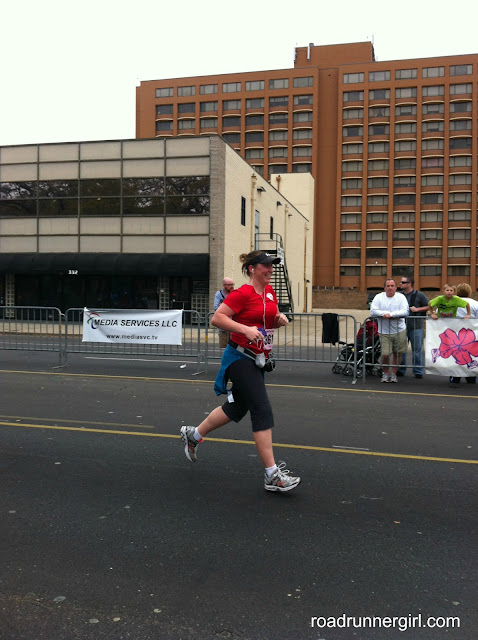 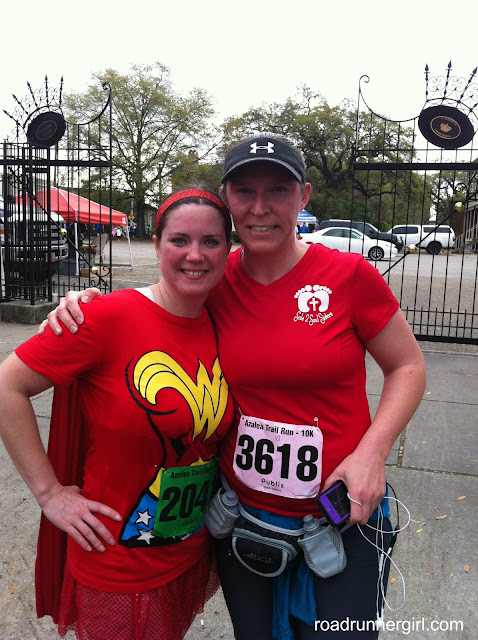 After all our sisters had finished we took a few more pictures to celebrate and then headed for the after party! 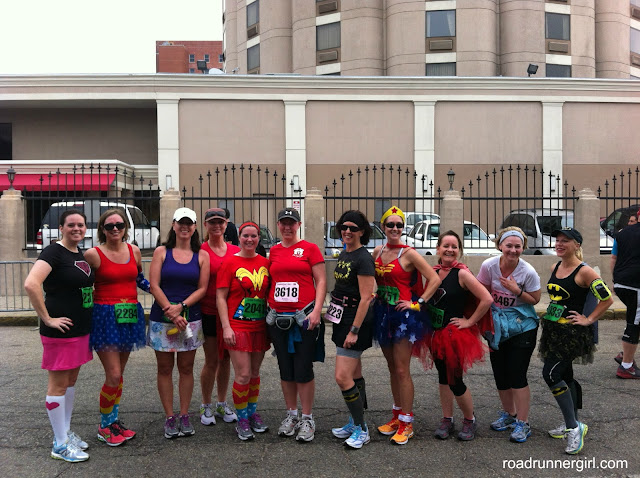 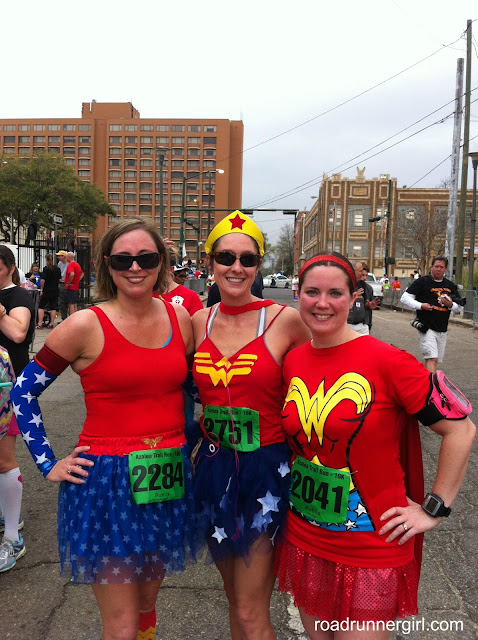 Only after a race will you ever see a garbage can piled this high with bananas lol! 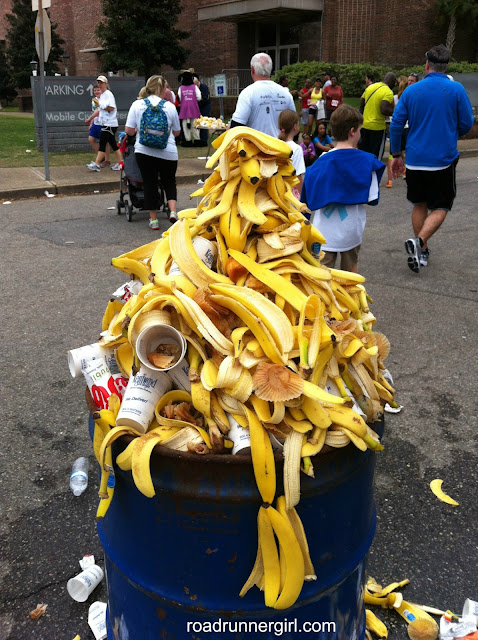 On our walk to the party a random guy came up to me and Paige and asked if he could take a picture with us. He kept saying our costumes were awesome. We agreed to take a picture lol! 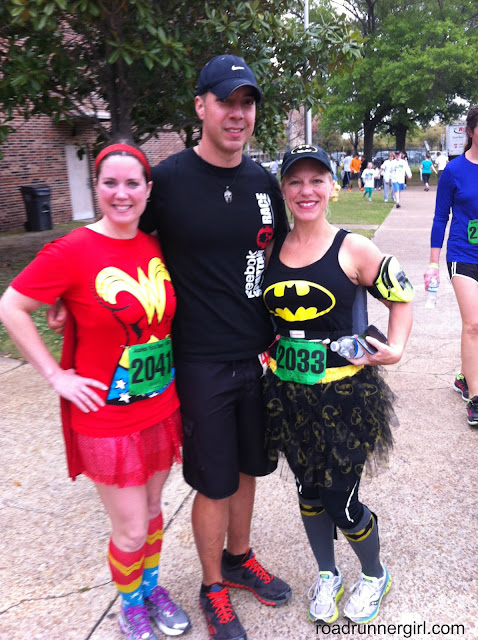 The post race party was being held in the Civic Center. The vendors from the expo were all still there so you could do more shopping if you wanted. They had beer, cokes, cheese grits and sausage. Yum! We also saw tons of people with Chick Fil A sandwiches and it took us forever to find them. But finally we did. They were outside the Civic Center and only had a few more left so we quickly got in line! They shot the sandwiches out of the side of the truck...it was fun to watch! And that chicken sandwich had never tasted so good!!! 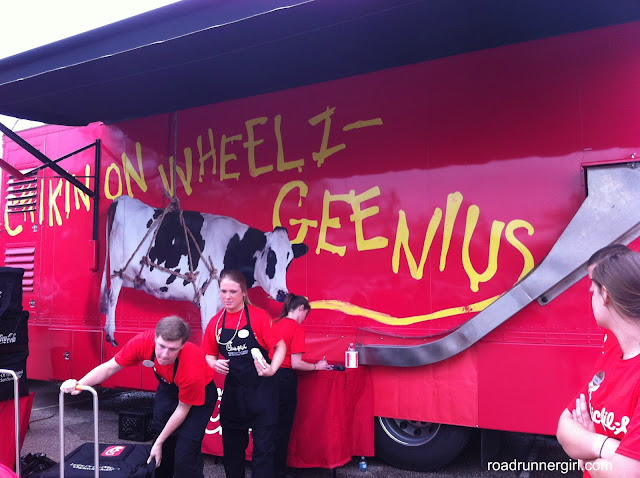 I am so glad the weather held up for us. Around 1:00 that afternoon the skies let loose and we even had some hail! I'm so glad that didn't happen while we were running...ouch!!!

Many of you asked where I got my costume. The shirt and socks I got online but I can't remember where. I just googled "Wonder Woman shirt and socks" and found them. The skirt came from Team Sparkle. It was my first time running in a Team Sparkle skirt...and I was super impressed! It never bothered me once during the run and it didn't ride up or chafe! I will definitely be investing in some more of these skirts! The headband is a Sweaty Band that I bought at the Walt Disney World Marathon Expo to wear with my Snow White costume.

It was a fun race...like always! If you ever get a chance to run a race in Mobile, AL...this one is a blast! I highly recommend it!

QOTD: Do you have a local race that you run every year?