Not too long ago my friend Larisa from Zero to Twenty Six Point Two sent me a text asking me if I wanted to try a new energy gel for my runs. Well being the running blogger that I am I love trying new things! But first I did a little research because I didn't want to say yes if I knew that it would be a product that I wasn't interested in. So she told me the name of the gel...Huma Chia Energy Gel...and I immediately googled it. When I saw the words "chia" and "all natural" I knew I definitely wanted to try this gel.

I got in contact with Ian from Huma Gel and he quickly sent me 4 gels to try! 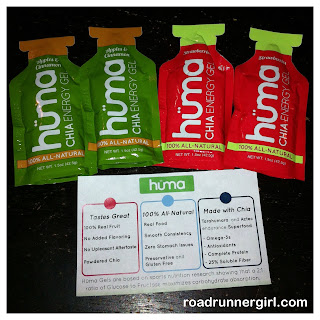 I love the story behind Huma. Lieutenant McCollum was in Iraq and reading a book about the Tarahumara, a tribe of Mexican Indians who compete in 100+ mile races as part of their culture. To fuel themselves on these ultramarathons they use a special blend of chia seeds. He decided to see if this would work for him in Iraq. It indeed worked and it lead to the creation of Huma!

So what is Huma all about? (click on the image below to enlarge it) 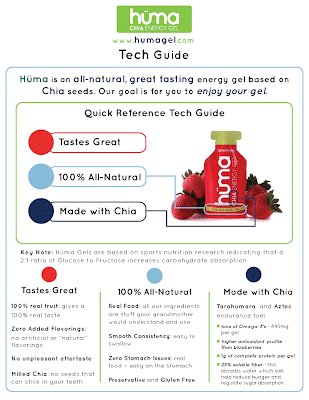 Made with chia, tastes great, and 100% natural...what more could you want?

It comes in two flavors: Strawberries and Apples & Cinnamon!

I've talked about how I fuel for my long runs and how GU is the gel I use. A lot of my friends can't use GU because it upsets their stomach during the run. I've never had that problem during the run. It happens to me AFTER the run. I've just come to accept that my tummy is going to hurt for a few hours after a long run. But...I've learned through Huma Chia Energy Gel that it doesn't have to be that way!

I first tried Huma on a 12 mile training run. The course was very hilly and I knew I was going to need that fuel to get me through it. I usually take my gels about every 45 minutes...Huma suggests the same thing...and to drink lots of water with it. So around that time I consumed my first ever Huma gel...the Strawberries one. 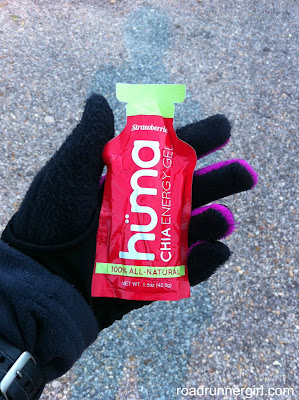 It was so yummy! It tasted like strawberry puree. And I didn't notice the chia seeds at all. The big plus is that it wasn't hard getting it down. With other gels I always have a hard time getting them down...and the texture usually makes me want to gag. Not Huma! The next few miles...and hills...of the run were great! I could feel the burst of energy from the gel...and my tummy felt fine!

The next 45 minutes I tried a second Huma gel...the Apples & Cinnamon one. Oh my goodness this one was my favorite! It tasted like Apple Cinnamon applesauce or apple butter! And for all you texture people out there...the texture is just like applesauce. I actually could feel that I was putting something healthy in my body! I was in love...with Huma! 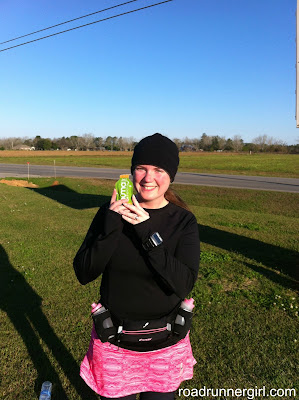 The next weekend I ran the Rock 'n' Roll New Orleans Half Marathon. What fuel did I use? The other two Huma gels that Ian sent me! And...I had a great race!

The next weekend I was running the Seaside Half Marathon and I could NOT make myself go back to GU. So I was on the hunt for Huma! Luckily, using the Store Locator section of their website, I found a place locally that sells it!!! And you can bet I stocked up! As you can tell, the Apples & Cinnamon is my favorite!!!


And do you remember that little race called Seaside? Where I PRed???? Yeah...I give all the credit to Huma!!!

My pace partner, Holly from Running and Baking Oh My, won some Huma gel in a giveaway and I was sooo excited for her! This tweet from her sums up how well Huma Gel worked for me in Seaside.

@mindybobe @asphaltnosher @humagel I know! I'm so excited, after seeing how great it fueled you at Seaside, you were a machine!!
— Holly (@running_baking) March 13, 2013


So....are you sold yet? Don't you want to try Huma Chia Energy Gel??? Well here's your chance to win some! Ian has offered 2 four-gel sample pack prizes to giveaway to my readers! Yeah!!! All you have to do is enter below (please be sure to follow all the guidelines...I will be checking). Note: this giveaway is only open to continental US residents.


Don't want to wait so long to try Huma? They sell the four pack sample packs on their website. Ian has again been so generous and is offering my readers FREE SHIPPING on one four sample pack! Just use the code ROADRUNNERGIRL at checkout. :-) Hurry because this code will expire April 7th!

If you try Huma...please let me know what you think! It is now my number 1 choice for fueling my long runs!

Disclaimer: Huma Chia Energy Gel sent me samples of their product to taste and review. I received no other compensation. All opinions in the above post are mine and mine alone!