March 5 by the 5th Virtual Race!

I missed my weekly run with the girls (Therapy Thursday) because I had to sub. So I had to run Friday solo. This was one of those mornings where I really didn't want to run. I was not looking forward to running by myself. I was not looking forward to running a short run (remember I love running long distances so much more than short distances). I really tried talking myself out of this run but knew I needed to run it since I had the Seaside Half Marathon on Sunday. So I got on my running clothes and strapped on my running shoes and headed out the door.

The first mile was torture. It was chilly and windy outside so I opted to wear capri pants instead of my beloved running skirt. Yeah...big mistake. The first mile I kept having to hike up my pants because they were falling down! Finally I got sweaty enough and they started to stick to my body and stop falling down.

Mile two I started warming up. The run didn't seem quite as bad. I was starting to feel glad that I had gotten out there. And I was running at a fairly fast pace for me!

Mile three I was sooooo glad I got out there and did this run! I felt great!

Of course I know that I will ALWAYS feel better after a run and I will ALWAYS be glad I got out there and did it. But sometimes it's hard to convince your mind of that when you are wanting to be lazy. 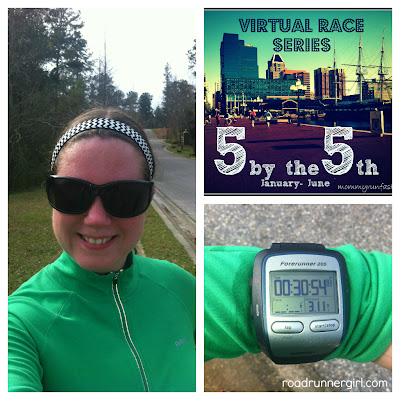 QOTD: Do you ever have that battle about not wanting to go for a run?