Seaside School Half Marathon Packet Pick Up and Expo!

I was so excited to run this race! The Seaside School Half Marathon sells out super fast every year. Why? Because not only do you get a medal at the end of the race...you also get a Vera Bradley bag! Wow!!! 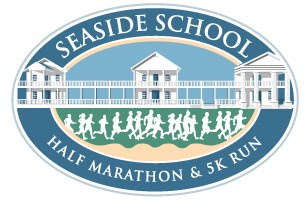 This was also the second group of Sole2Soul Sisters that I helped train for a half marathon. I was so excited to run this race with them!

I left early Saturday morning to head to Seaside, Florida where the race was being held. I couldn't wait to visit Seaside! I'd always heard what a gorgeous little town it was and of course I've seen the Jim Carrey movie, The Truman Show, that was filmed in Seaside.

My hubby was supposed to come with me to Seaside but the boys had their Blue and Gold Banquet with Cub Scouts this weekend and Andy had to be there since he is a den leader. He and Hayden also had to bake their cupcake for the Cupcake Bake Off. So I headed out on my own for Seaside.

Once I made it to 30A the traffic was horrible! I'm assuming everyone was arriving in Seaside and trying to find their houses and condos. Plus I learned that in Seaside pedestrians have the right of way so if you see one on the side of the street you are supposed to stop so they can walk across.

Most of my friends had arrived in Seaside on Friday. I was staying with my friend Coby and her family. They rented a house in Seaside and it was perfect! It was only about a two minute walk from the town square and where the expo, packet pickup, and start/finish line were.

I felt pretty good about my directions. I had the address plugged into my gps and all was good...until I was on the wrong street. I had to call Coby and figure out where I was. She wasn't sure so she handed the phone to her awesome Dad. After a few turns in the wrong direction he finally saw me (he was walking on 30A trying to spot my car) and I had him jump in the car with me to get me to the house. It was easy when you were on the correct street lol! Turns out I had missed an important word in my gps address..."East." Because the street our house was on was East but there was also a street with the same road name and West....and those two streets did NOT intersect! Tricky! But I was glad to have finally made it!


See how cute and "Seaside-y" our house was? 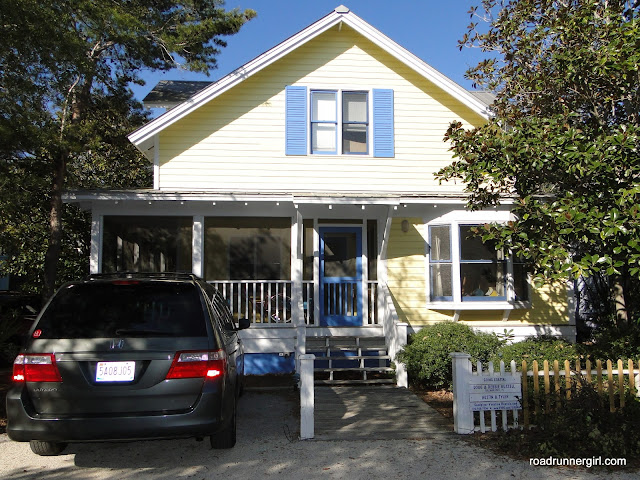 One thing I noticed in Seaside is that all of the houses had a name and the owner's names and where they were from on the picket fence. Our house was called "Going Coastal." 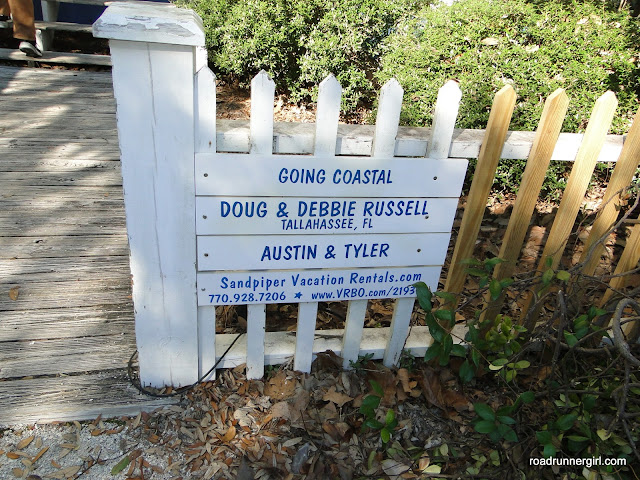 The house felt like a little cottage. It had a full kitchen, half bath, dining room, living room, and a bedroom (with a queen bed and bathroom) downstairs. Upstairs there were two other bedrooms (one was a master with a bath and the other was a bedroom with twin beds). There was also a full bath and a loft with a twin bed. So overall it would sleep 7 people!

I slept in the bedroom with the twin beds upstairs! Very comfy and homey! 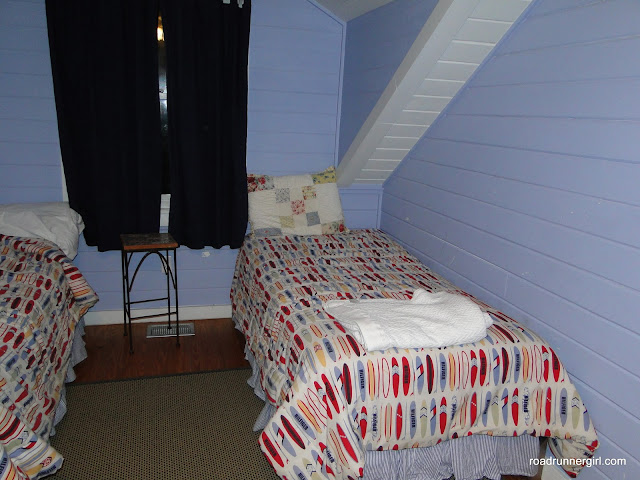 After checking out the house we headed to the Seaside Neighborhood School where packet pick up was. This race benefits the school...as a teacher I LOVE that! The school was so cute! And I found myself not believing that people actually lived there in Seaside. It seemed more like just a place to visit. 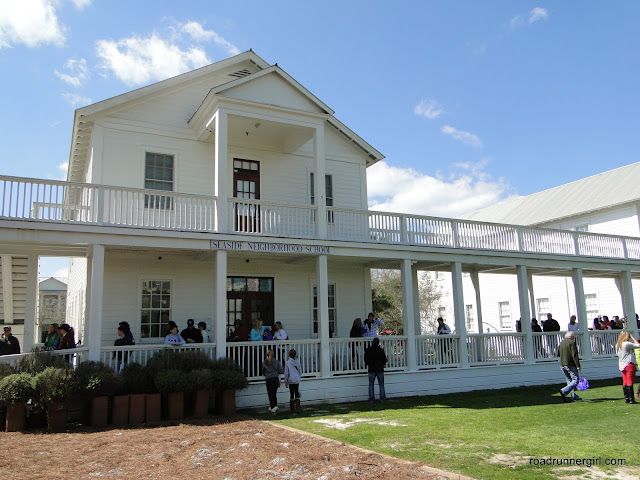 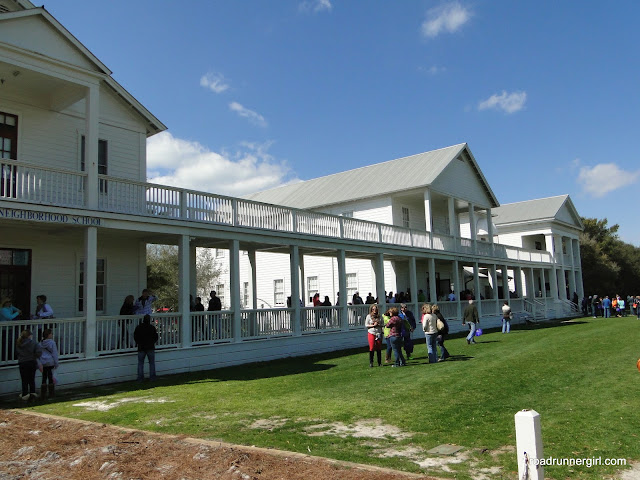 The line to grab your packet was so long! But surprisingly it moved super fast! The race organizers had the process down...this was the 11th year of the race! 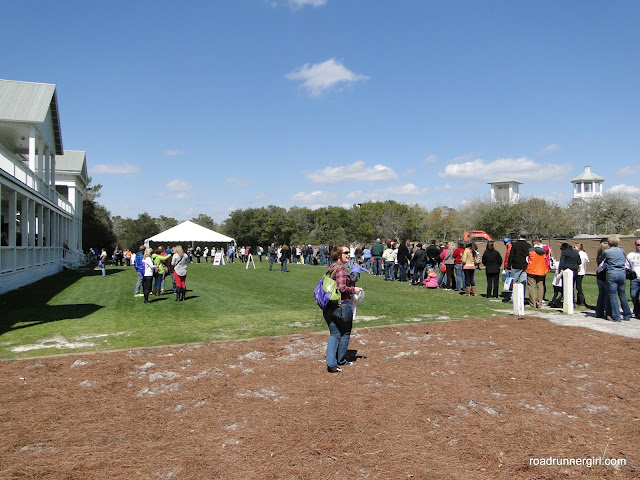 There were signs that pointed you in the right direction...whether you were going to the expo or packet pick up! 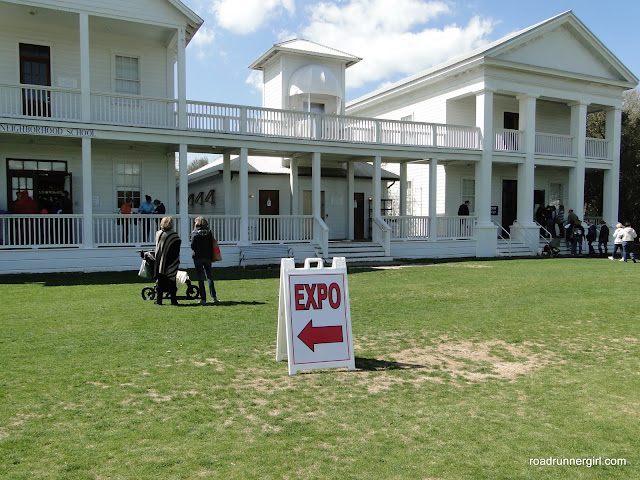 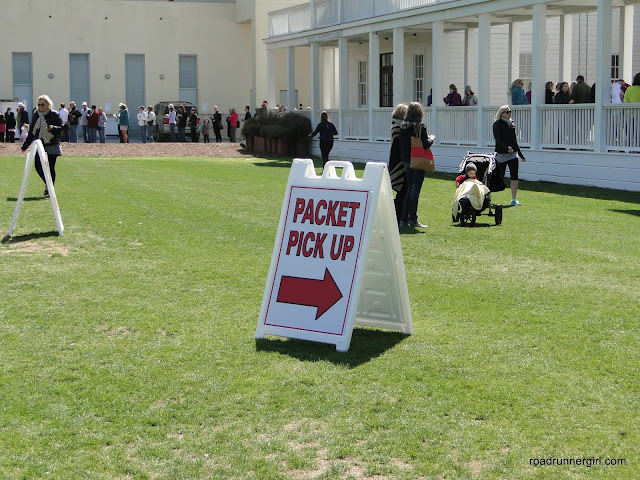 The first thing you did was go in and get your race bib. The race organizers were very adamant in all their race literature that you and only you could pick up your packet. They DID ask for my driver's license but I don't even know if they looked at my face to make sure it was really me. After getting your bib you walked to another part of the building to get your race goody bag and shirt. 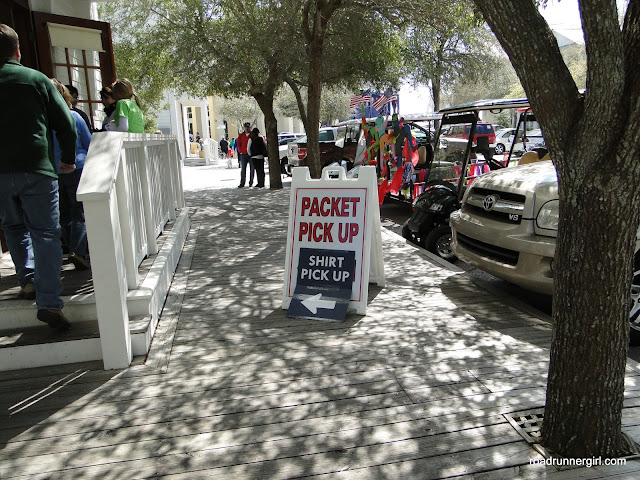 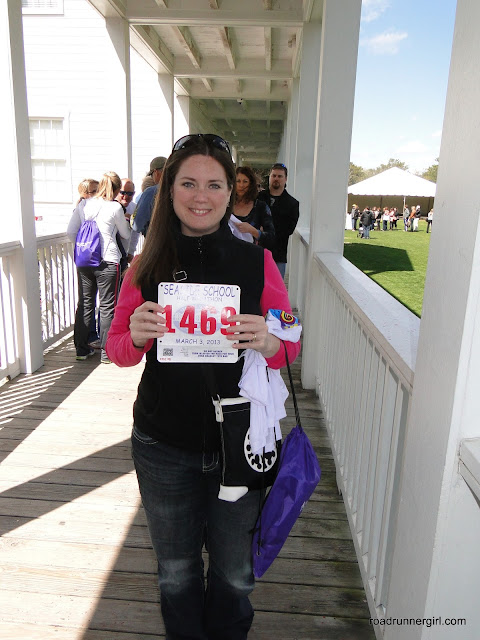 The shirt was super cute!!! 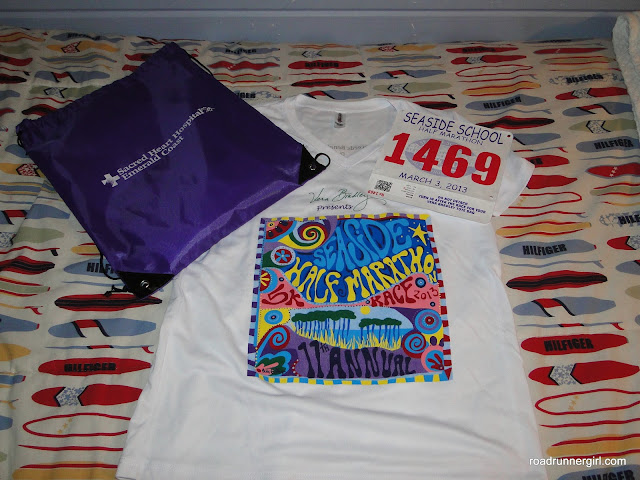 It was all a super easy and super quick process! We only waited in line about 5 minutes and picking everything up took less than 5. Now it was time to head to the expo. The expo wasn't far away...and was located in central square by the amphitheater. 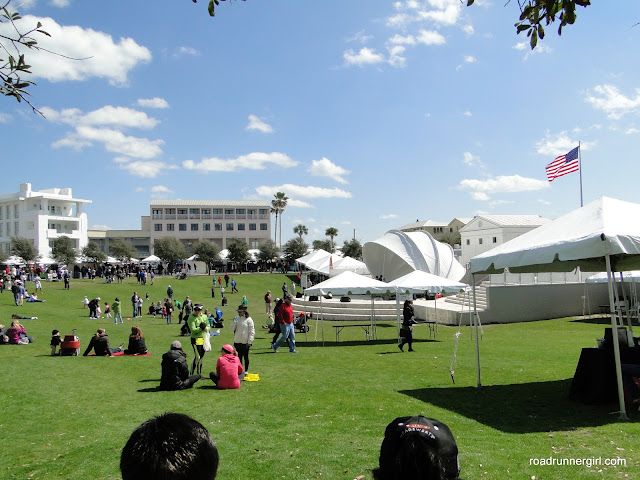 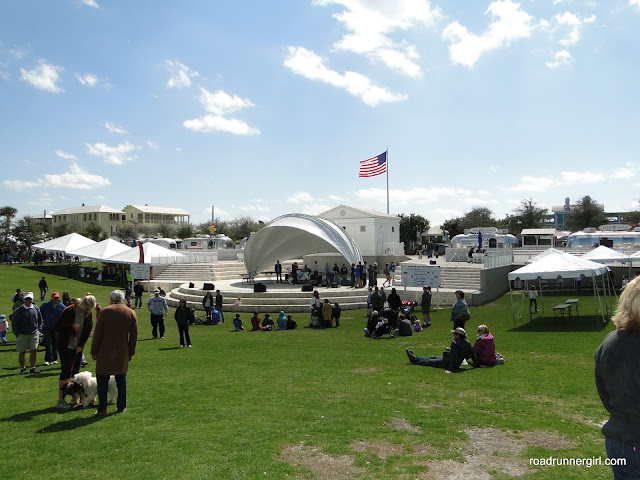 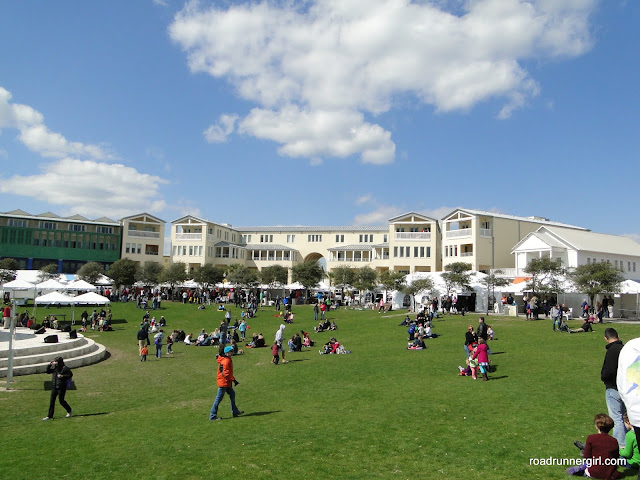 The vendors were set up under white tents that circled the edge of the square. I wasn't expecting much but I was highly surprised! There were several vendors there including my favorite running store (Running Wild), Team 413, and Saucony! I was impressed! 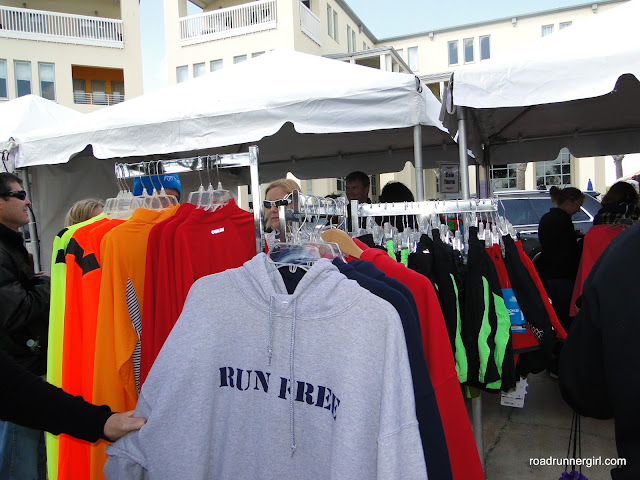 They also had a silent auction. I had a blast looking around in there at all the neat things! I didn't bid on anything but Coby's mom won a cute bike that was just like a bike she had when she was a little girl! 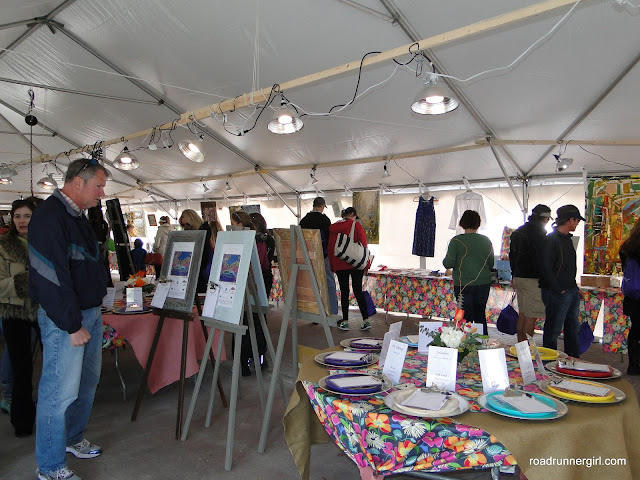 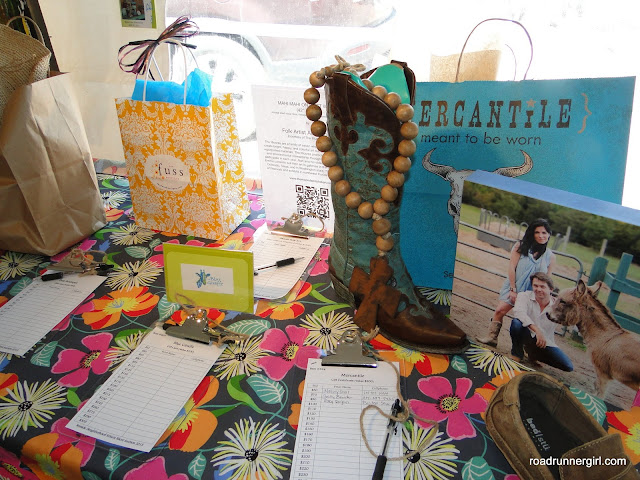 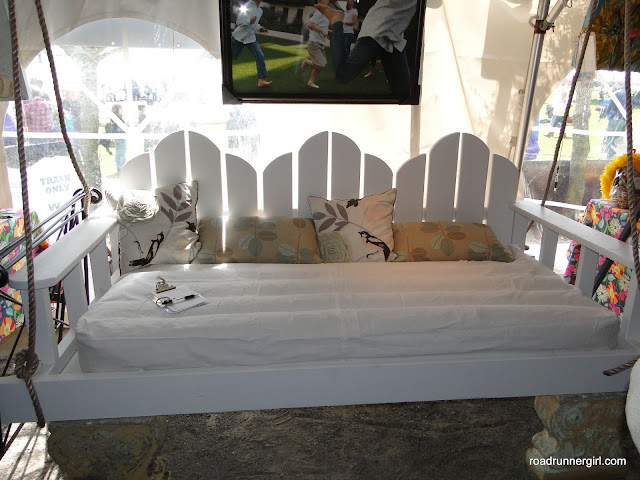 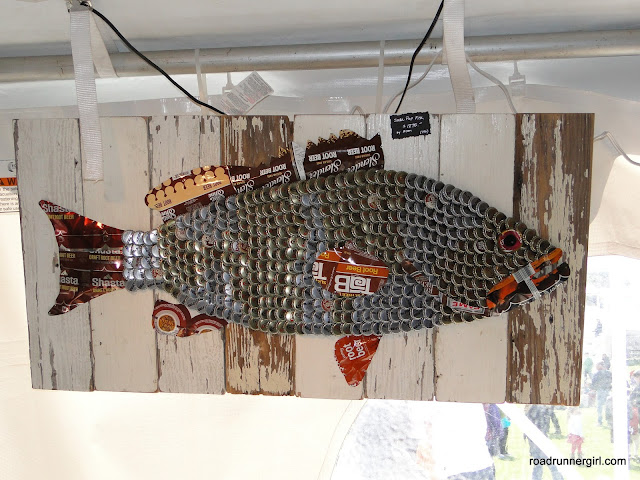 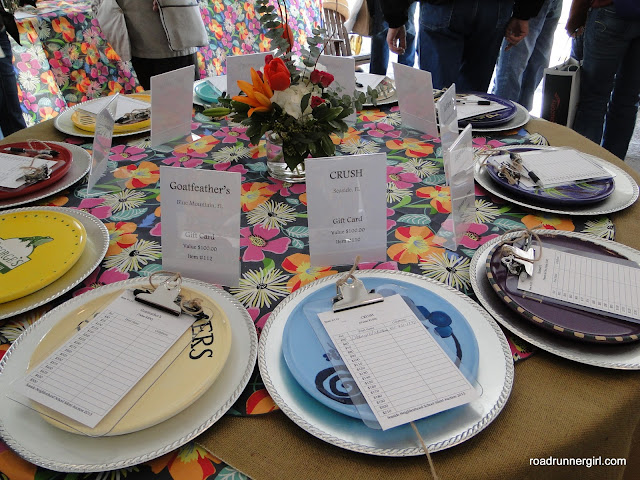 After shopping we were ready for some lunch. We wanted something quick and easy so we headed in front of the amphitheater on 30A and found several Airstream trailers that served food! There was a hot dog place, yogurt place, grilled cheese place, and bbq place. I decided to get a grilled cheese at the trailer called The Meltdown on 30A! They had so many options but I decided to not try anything adventurous the day before a race and just got the classic grilled cheese. And it was really yummy! I also got sweet potato chips with it....sooooo good!!! 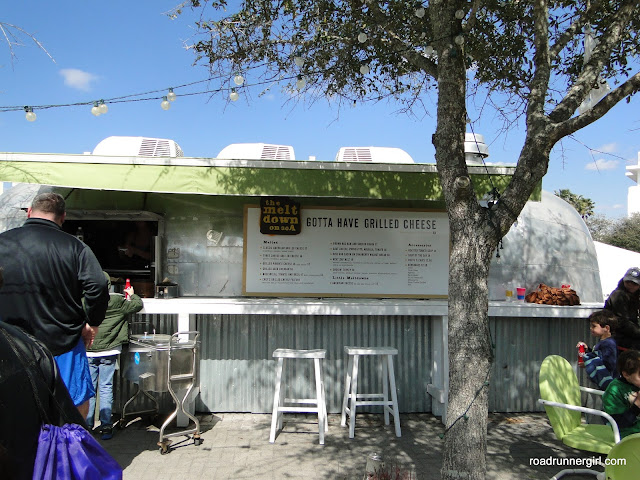 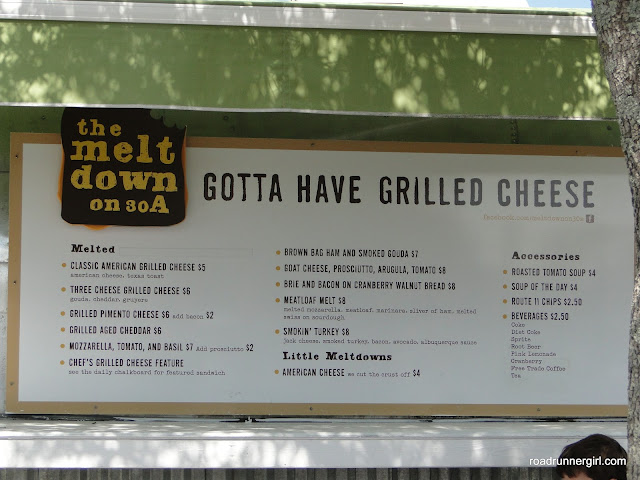 The Airstream trailers were nestled around the Seaside Post Office. It was awesome to see this landmark building! It is said to be one of the country's most photographed post offices! You bet I got my own photo! 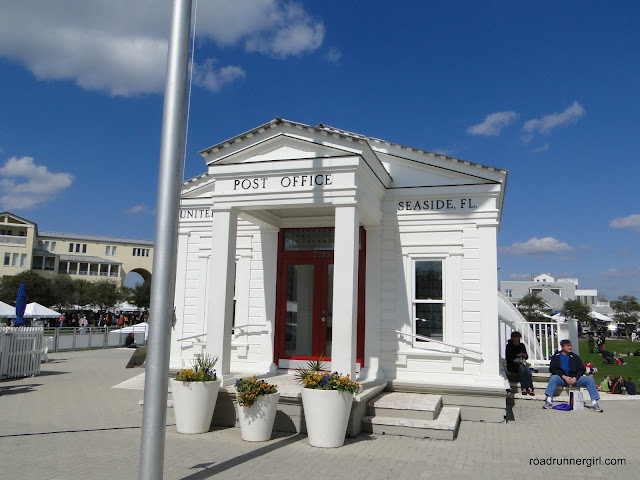 We ate our food out on the lawn in front of the amphitheater...they had a band playing. But it was soooo cold and soooo windy that we didn't last there as long as we wanted. We headed back to the house to relax a bit.

For dinner we had a home-cooked meal of spaghetti, salad, and garlic bread. I was so hungry that I totally forgot to take a picture! Just believe me when I said it was super good! :-)

Soon it was time for bed. Luckily we didn't have to wake up super early because we were only about a two minute walk to the start line. Most of my friends were staying outside of Seaside and they had to get into town before 6AM because that's when they were closing the roads. Lucky me I didn't even wake up until 6AM!

Per race tradition, I laid out all my clothes and gear. This would be my first half marathon (out of 15) where the weather was super cold and windy. Normally I train in those conditions but come race day it's warm. I prefer running in the cold so I was looking forward to it. Although the cold did mess up my outfit lol! I couldn't wear my cute compression socks! It was tights instead. And layers! 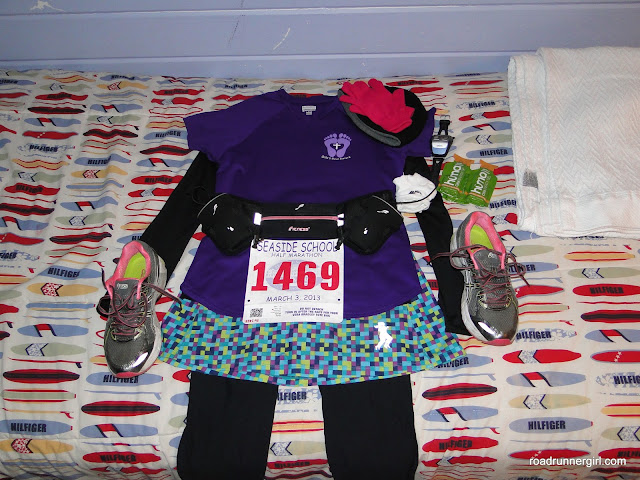 I was ready for half marathon #15!

QOTD: Have you ever been to Seaside?