This past weekend me and my boys participated in the Color Me Rad 5K! It was my boys' first 5K and they did awesome! I was so proud of them!

I went to packet pickup two days before the event. 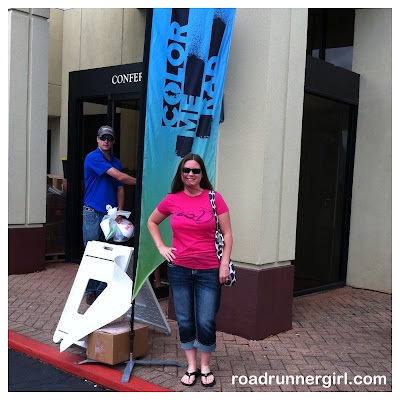 There wasn't an expo but they did have some pretty awesome Color Me Rad merchandise for sale. They had several shirts, tanks, and socks you could buy. They also had a super cute hoodie for sale. I didn't buy anything though...and my hubby is proud! ;-) 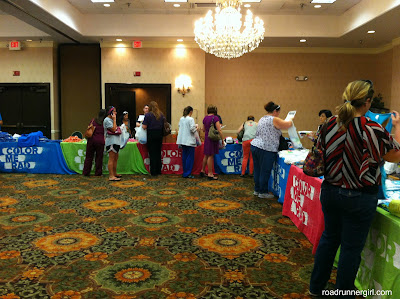 I was super impressed with the race shirt. They had men and women fit shirts. I ordered a women fit and it fits great....other than being super long. Along with a shirt, you also got a bib, RAD tattoo, and a pair of neon sunglasses! 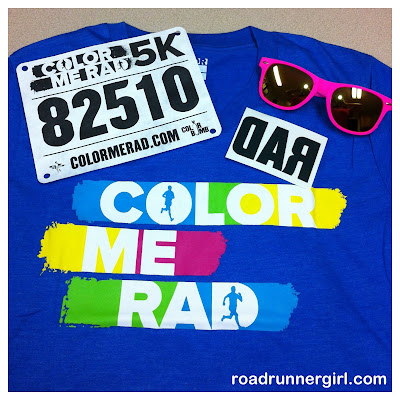 My plan was to run this race with my friend Stephanie and her daughter and daughter's friend. My boys didn't want to do it at first. And then 3 days before the race they told me they wanted to do it...yay! Stephanie and I had plans to make our own rainbow tutus for this race. But after the bombings at the Boston Marathon, I decided to make my tutu in the Boston Marathon colors of blue and yellow. My blue is a little off (it should be more of a royal blue) but I couldn't find that color tulle. It's the thought that counts though. I think the tutu turned out great! 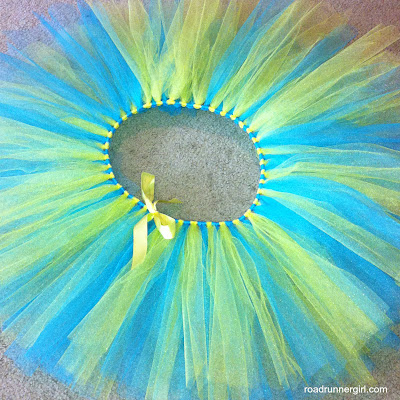 This race is mostly a race to have fun. It is not timed. You basically run it for the purpose of getting "color bombs" thrown at you! You sign up for a wave time...and that's the time you start running. Our wave was at 9:20. The race was only about 30-40 minutes away so I felt like I was sleeping in on race day! It helped that we didn't have to be there super early because not only did I have to get myself ready...I also had to get my two boys ready!

The boys were so excited! Sawyer couldn't wait! Hayden was a little hesitant about it all because he hates to get dirty. I've done the Color Run in the past so I knew he could stay in the middle at the color stations and probably wouldn't get much paint on him. I told him that and it helped him feel a little more at ease.

We rode with Stephanie and made it to the race in no time! We took a few before pictures of us all clean and white! 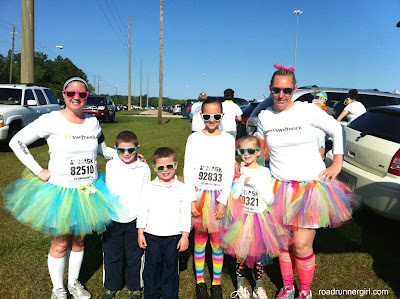 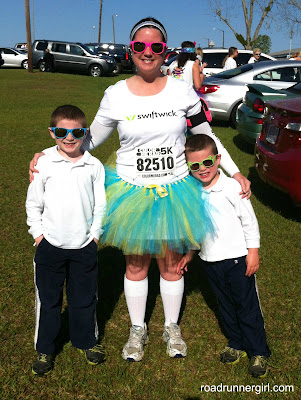 The race was being held at the fairgrounds. We wouldn't be running on pavement...but on grass and gravel. You could feel the excitement in the air! Everyone was excited to get colored with paint! We saw tons of people throwing color at each other as we made our way to the start line! 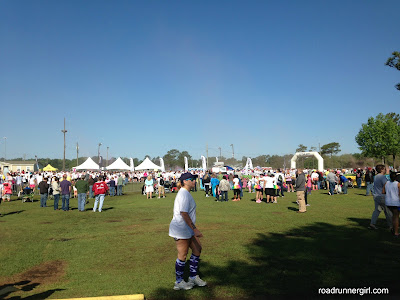 We made it to the start line and had to wait about 5 minutes before our wave started. One of the volunteers kept us entertained and threw color packets to the crowd. We also saw Gumby! He was running each wave that day...and would have ran a half marathon by the day's end. But it was all for a good cause...this race was raising money for the Ronald McDonald House! 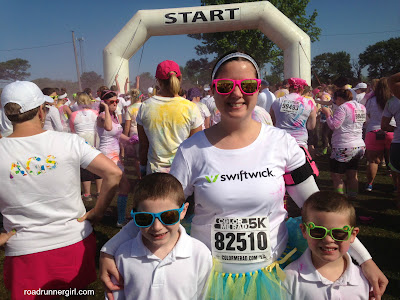 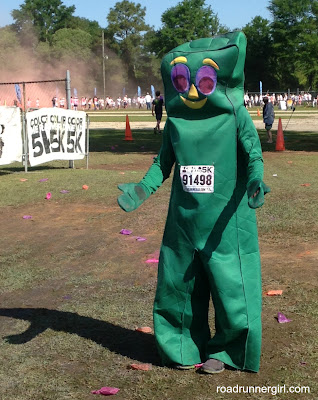 Finally it was time to start! We started out running but that didn't last long with the little ones. I knew going into this race that we would mostly be walking since my boys were doing it with me. But I was ok with that...I was so excited they were there with me! 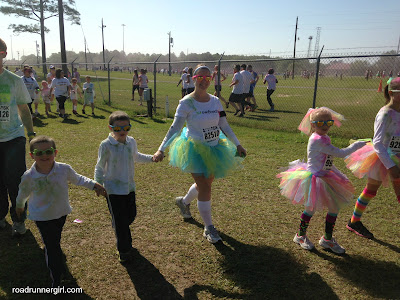 There were four stations of color throughout the race with the final one being at the finish line. Unlike the Color Run (that does one color at each station) this race had several colors at each station. And the color wasn't always in powder form. They had some color that was wet...like green water. They would spray it at you or even pour a bucket of it on your head if you so desired! Another difference from the Color Run was how they colored you. At the Color Run the color was in bottles that they used to pour on you. At this race, they threw the powdered color on you.

At the first station I watched my boys carefully to see how they were going to react. Sawyer loved it! Hayden was shielded by me and barely got any on him...but he was good with that! 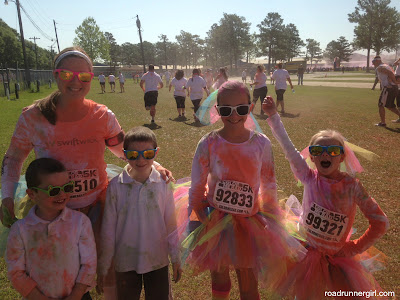 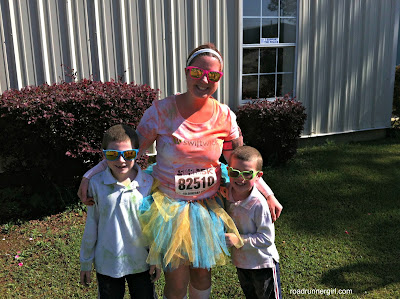 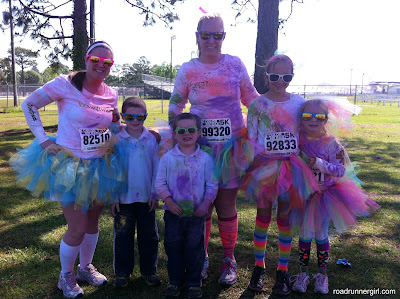 The boys did really well at the race...we took turns jogging and then walking. They complained a few times about their legs and feet hurting but I would just tell them we were almost done and they would continue on. I was super proud of how well they were doing! After four color stations we made it to the finish line. I was so proud of them! They had just completed their first 5K!!!! 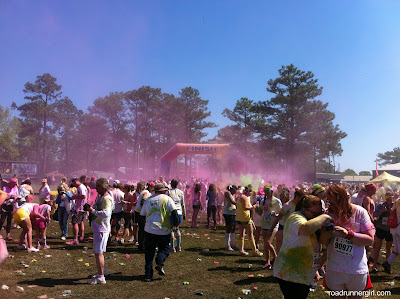 Of course we had to get some pictures of us all colorful! 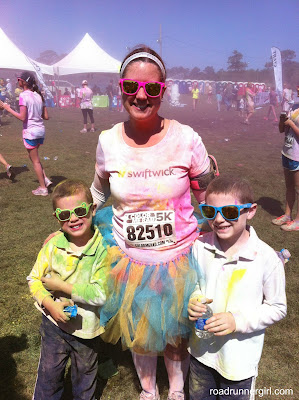 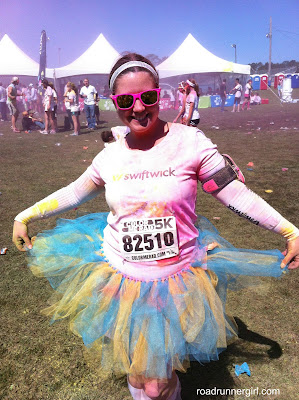 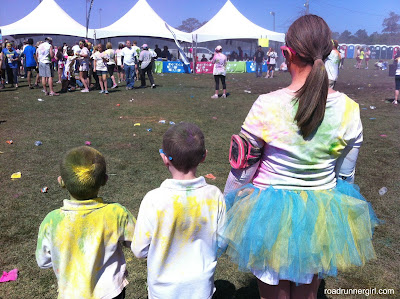 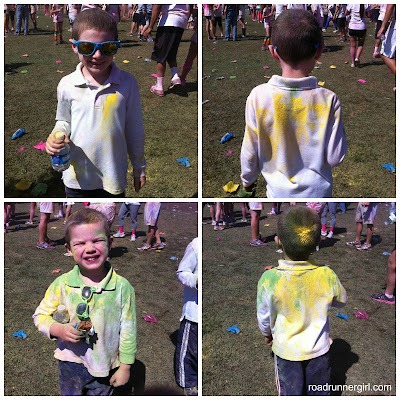 Me and Stephanie had to have a picture together too! I love this girl! Her husband is in the Coast Guard and they will be moving in about a month and a half. I'm going to miss her so much!!! :-( 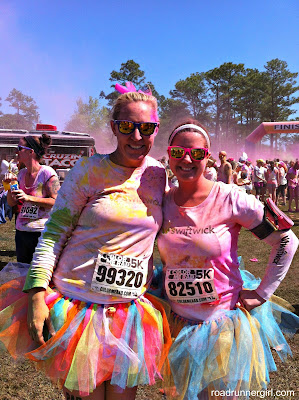 Here's a quick video of all of us that I took after we finished the race!


We hung around a little while after we finished. We watched the activities on stage. They had several people that were being "colored" for prizes. They also would count down and have you throw your color packets in the air at one time to make a huge color explosion. I tried to get a good picture of that but it didn't turn out as good as it looked in real life. 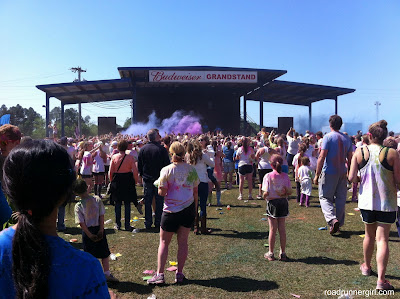 Another fun activity they had was the "mullet toss." If you're from Alabama then you know what that is. It's basically what it sounds like...you toss a mullet which is a very populated fish in our area. They had 3 people toss mullets into the crowd and the winner was the one who tossed it the farthest! It was hilarious...and pretty gross! ;-) 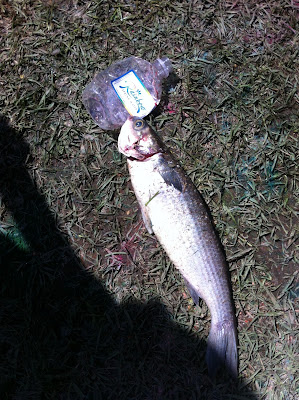 We took a few more pictures before we headed home for some much needed showers! 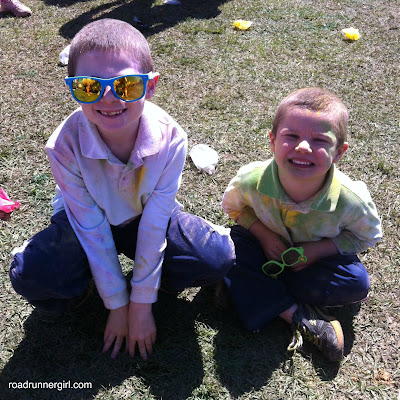 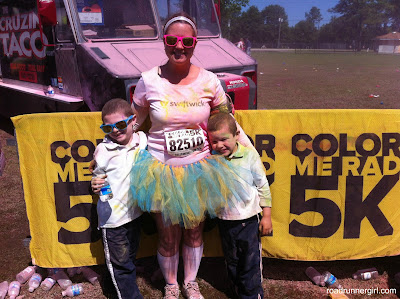 We had a blast at Color Me Rad! My boys are already asking to do another one! Hayden even said that the next time he was going to get as much color as he could on himself! :-)

QOTD: Have you ever done a Color Me Rad or Color Run?