I didn't go to the expo for this race since I was so busy doing the Zombie Run. But my friend Megan picked up my packet for me...thanks again Megan!

This race is only about an hour away from where I live so I got to sleep at home. We had plans to meet up early that morning to drive to Pensacola Beach. Here's my race gear the night before the race! Running skirt, compression socks, Asics, Huma Gel, my Garmin, iFitness belt, and BAMR Bands...what more could a girl need on race day? 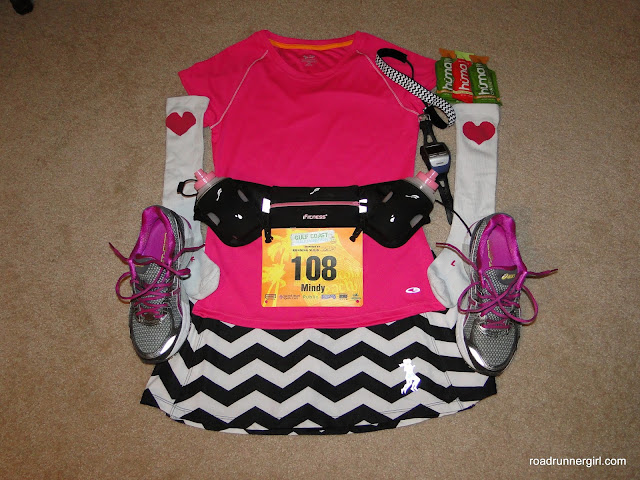 Paige picked me up at 4:45 and we met the other girls so we could carpool. It was early but we had so much fun driving to the race!

I will say that I woke up that morning with super sore legs. All that chasing, lunging, leaping, and sprinting as a zombie the day before made me really sore! And I ate a PowerBar in the car that morning and it made me feel a little nauseous. So I wasn't sure how this race was gonna go. But I was determined to finish and have a good time.

We took a few pre-race pics. We had a pretty good group of Sole2Soul Sisters that were running this race. And it was my friend Marcella's first half marathon! 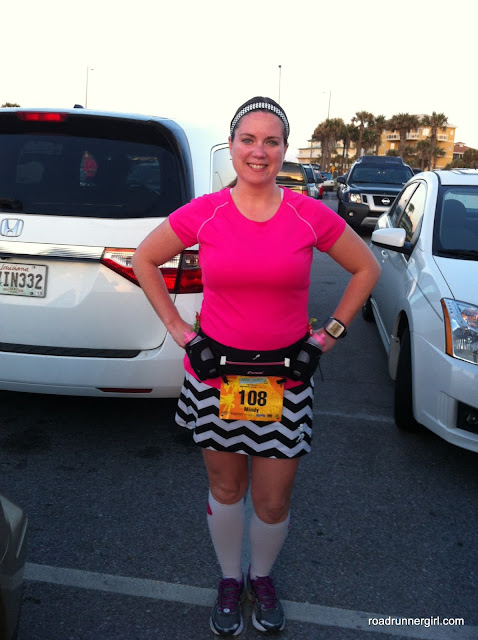 Marcella, Paige, and me! 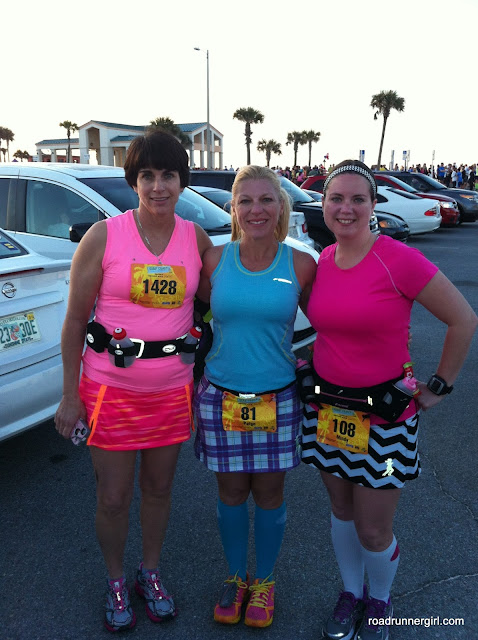 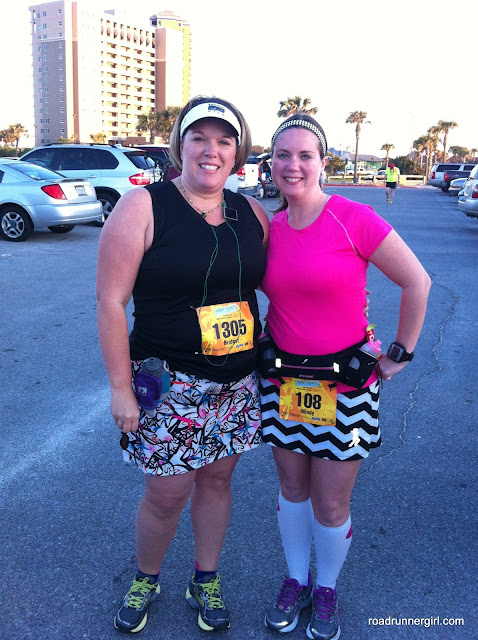 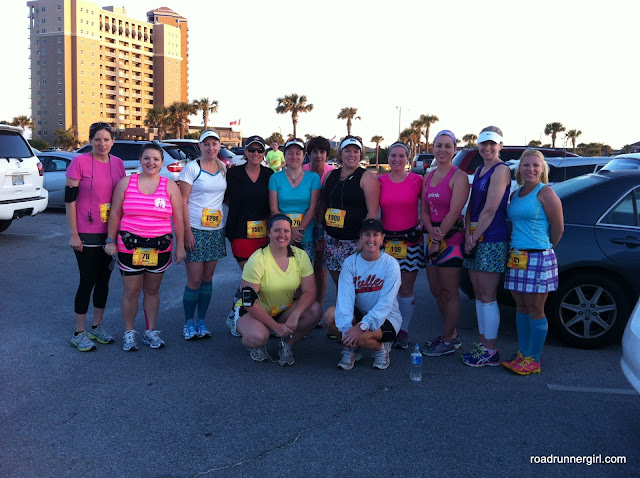 It was pretty chilly at race start time...the temp was in the high 50's and it was windy. But once we got in the corral at the start line we warmed up some. And then we were off! 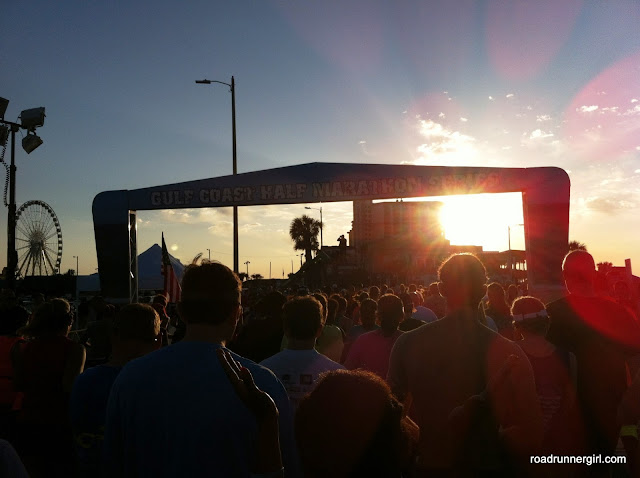 I knew this course like the back of my hand...this was my third time running this race! I tried my best to not start out too fast...but I kinda failed on that. It's just so hard in a race because you are so pumped up from all the runners around you!

The first 3.5 miles you are running in a neighborhood. Kind of boring. And my legs were sore and tired and taking forever to warm up. I just wasn't feeling it. I couldn't get into my groove. But I kept pushing. Luckily my pace partner Holly was with me. But she was tired too. She had done the Zombie Run with me the day before. We decided to just do our best and run it for fun.

Finally we made the turn back onto the main beach road...and to mile 4. But...there was a strong headwind that we were running against. Running in wind like that makes it ten times harder. And when your legs are sore and tired it's miserable! Plus it was getting really hot. And there was absolutely no shade on this course. Usually at this point in the race I have found my groove. Not this day. I couldn't find it. I think we made it to mile 5 and then we took a walk break. And that was the rest of the race for us. We would run for awhile and then walk. Run some more and then walk. 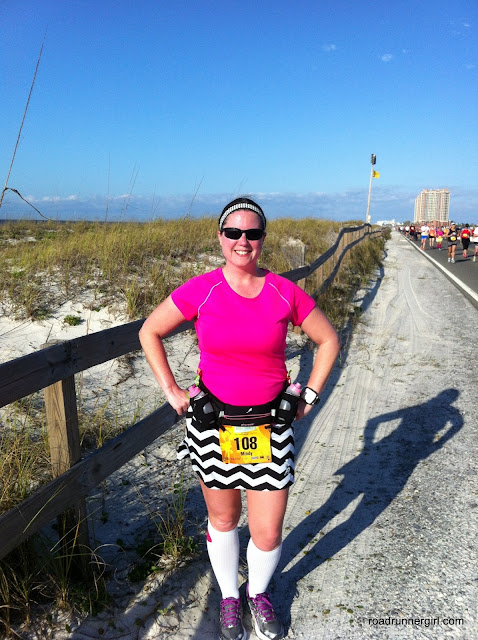 We stopped to take a picture of the beautiful scenery we were running by. By this time there were tons of runners heading back. I saw several people I knew! Ali who was running for Larisa's charity sped by. Regina from Life's Run yelled hey as she raced by! I was on the look out for my best friend in high school and college roommate Brigette. This was her first half marathon although she has been running for most of her life. She saw me first and yelled hey! I was so proud to see her running so strong!

Finally we made it to mile 7 and the turn around. We were over halfway done! But we were still struggling. We kept running and taking our walk breaks. There was no rhyme or reason to them...we would pick spots and run to them. Then we would take a walk break. During one of those walk breaks someone said to me, "I hope this doesn't sound creepy but I love your blog!" Of course that isn't creepy! I was so excited to hear that! I never found out her name...but if you're reading...thanks for telling me that! And please let me know who you are! :-)

Around mile 10 you turn into another neighborhood. This is my least favorite part of the course. You are so close to the finish and it feels like you are never going to get out of the neighborhood! But it's is pretty running on the sound side of the beach.

Regina's husband was in the pace car and was taking pictures. He took this one of me and Holly running! I think it is towards the end of the race. Thanks so much for this picture...even though I look hot and miserable lol! 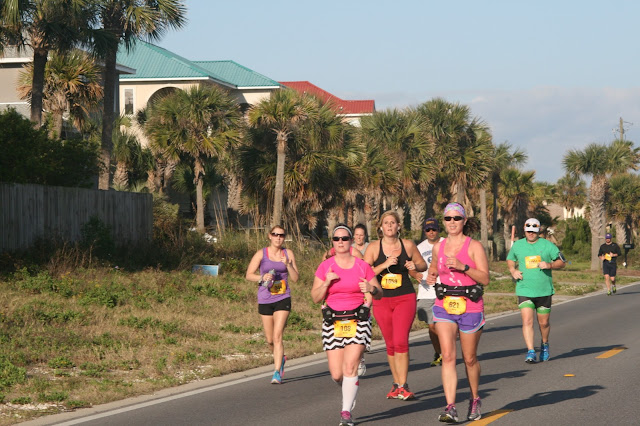 After what seemed like forever we turned out of the neighborhood and back onto the main road. We were almost to the finish. Some guys who had already finished were on the side of the road cheering everyone on. At that point Holly and I were walking. They yelled for us to pick it up..that we were almost there. That gave me the motivation to start running again and make it to the finish line!

My official finish time was 2:41:45. Not my worst but not my average half time either. But I still had a great time doing what I love...although it was a little harder for me this race! The medal at the end makes it all worth it! And yes...the medal is a bottle opener! 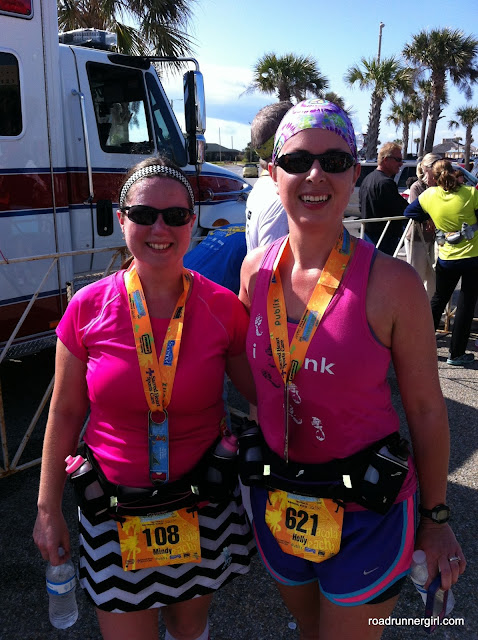 Holly and I headed into Flounders for the after party. It's always a lot of fun and there's always some fruit and red beans and rice to refuel. 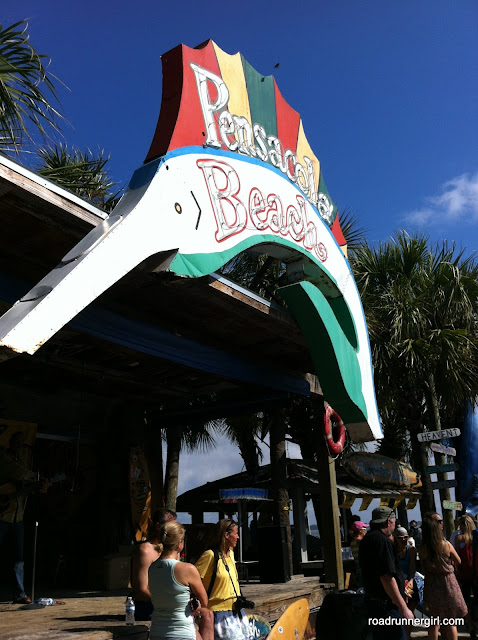 As we were walking out onto the deck my phone rang and it was Brigette! I could see her waving at me and I headed over to see my long time friend that I haven't seen in years! Her hubby, 3 kids, sister, and mom were all there and it was so great to see them all!!! And Brigette rocked her first half...she ran it in 2:05!!! Amazing! And yes....she is hooked and was already talking about running another one! :-) 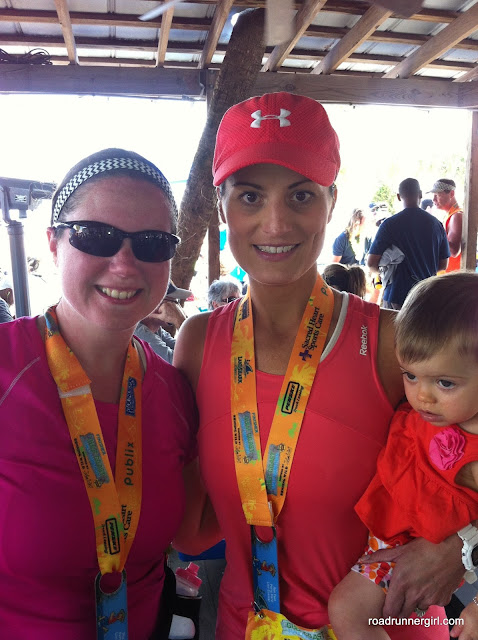 After catching up with Brigette I headed to get some food. By the time I got there (had to stand in line) there was only beans left...no rice. I still had some and it was yummy! But we were all still hungry! So Paige, Holly, Marcella, and I went across the street to a restaurant called Crabs- We Got 'Em to get some lunch. It was a super neat restaurant. You could sit inside and have a lovely ocean view or you could sit outside on the Gulf side deck. We chose outside and it was gorgeous! There was even a sand play area for kids...note to bring my boys there one day! 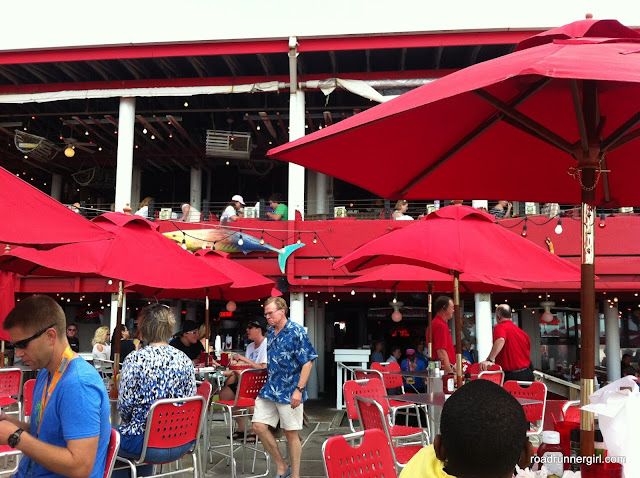 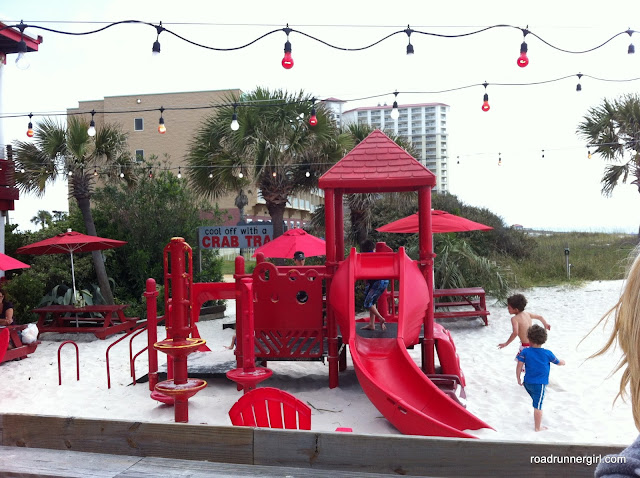 I ordered the fish sandwich, fries, and cole slaw! It was very yummy but I didn't eat much of it. I guess I wasn't as hungry as I thought! 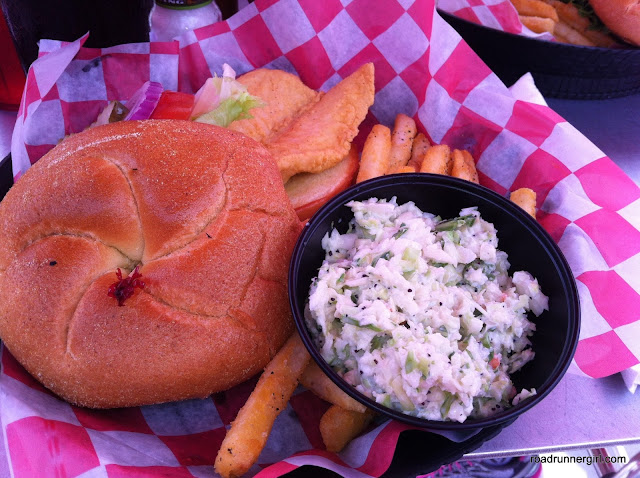 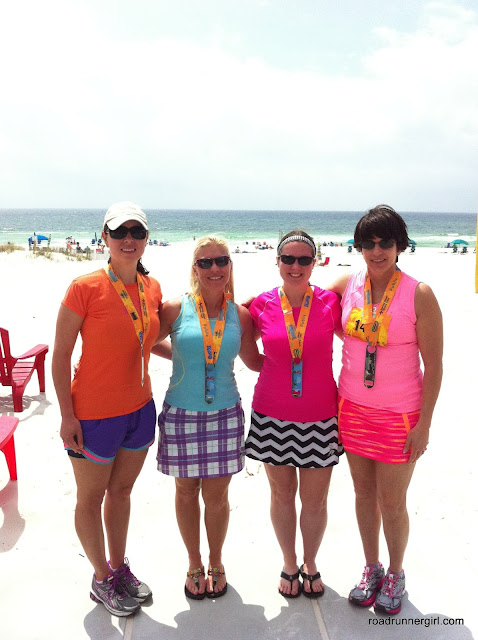 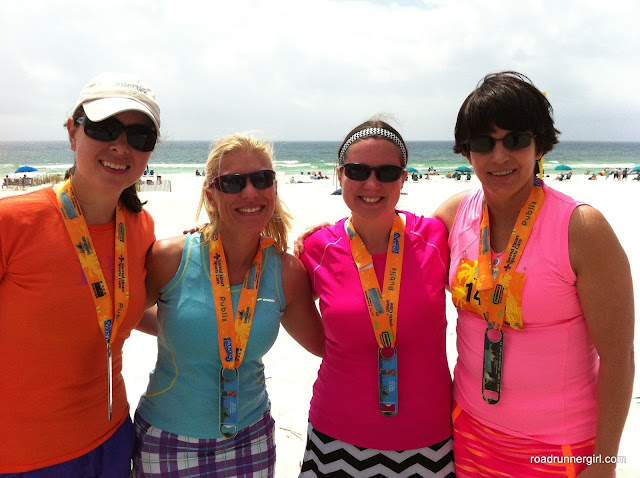 This race course is beautiful! I love this race series and even PRed last year. But I knew at mile 5 that this race was gonna be a tough one. When you've run as many as I have (this was my 16th half) you can't expect them to all be great. And you know what? I'm ok with that. I've come to terms that it's ok to walk during a race. I'm still out there doing something that a lot of people have never done.

For now...this was my last half marathon of the season. I'm taking a week off from running to let my body have the much needed rest and recovery. I'll be ready to get back out on the road soon!

One more thing about this race...not only are the bibs cute and the medals awesome but the shirts are my favorite! They are the softest cotton out there and are always super cute! 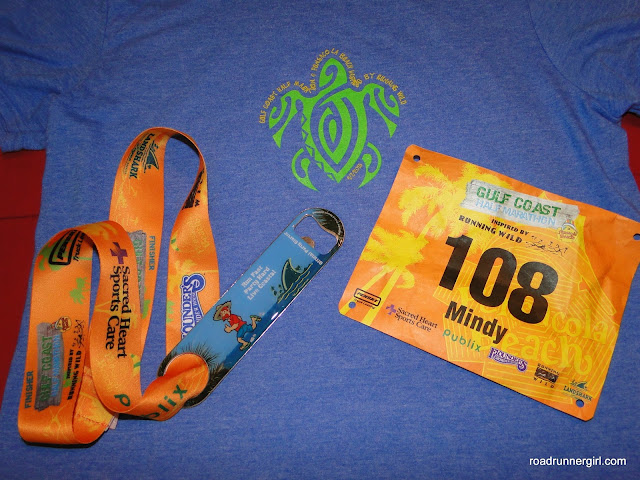 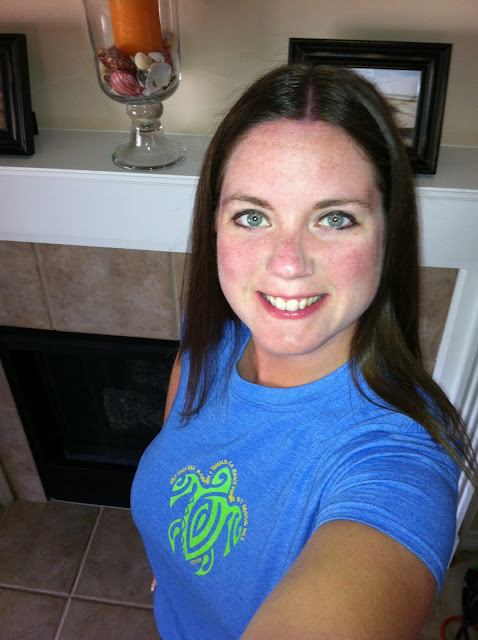 QOTD: Have you ever had a race where you just couldn't get in a groove?