June 5 by the 5th Virtual Race!

As you know one of my 2013 running resolutions is to run Laura's 5 by the 5th Virtual Race Series each month until June. I had so much fun participating in this virtual race and am so sad this was the last month!

All the other months, I ran a 5K for this race. But since this was the final month I decided to end it with a bang and run 5 miles!

Normally I run 5 miles and up with friends. But this run was a solo run for me. I didn't wake up early for this run and was prepared for the heat. I wore my hydration belt (which I normally don't wear for runs less than 7 miles) and my bottles were filled with water. I also brought along a Huma Gel just in case I needed some extra fuel (again I normally don't fuel for runs less than 6 miles).

When I headed out the door the temperature was hot. But it was overcast. There were clouds in the sky that looked like they might dump some rain on me. I welcomed it because the clouds kept the sun from beating down on me and that helped it feel a little cooler.

I was also on the lookout for snakes because I was running the same route I ran a few weeks ago when I almost stepped on a snake! Luckily, I did not see any snakes on this run!

The run felt great! My legs felt strong which I wasn't sure would be the case since I had been streaking for a few days. I also got to run by one of my favorite cow pastures. I've never stopped to get a picture and have always wanted to. Unfortunately the cows were way in the back of the field. They are normally closer to the road. But it still made a pretty picture...despite all the clouds in the sky. 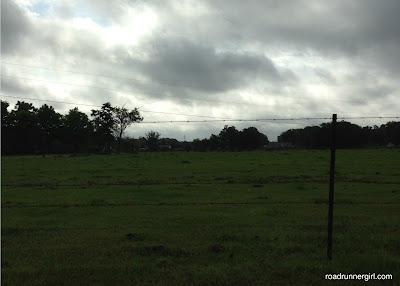 After a loop through one of my well frequented running neighborhoods, I had 5 miles in! It was an awesome start to the day and an awesome end to the 5 by the 5th Virtual Race Series! 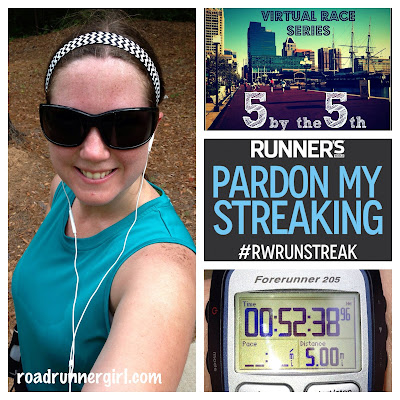 Since so many people have enjoyed this race series, Laura has mentioned maybe doing a fall mini series as well. I really hope she does!

For now, I am anxiously waiting and stalking my mailbox for this prized possession! Bling!!! :-) (picture by Laura) 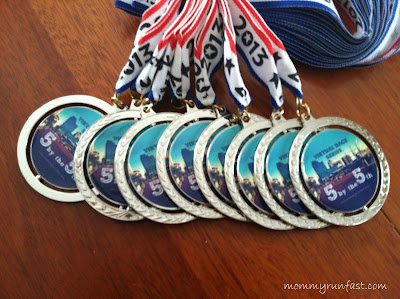 The winner of the Bestowed Giveaway is Carrie Capps Hughes! Carrie please email me at mindy@roadrunnergirl.com with your mailing address so we can get your box out to you!!! Congrats!