So I am a little bit excited!  You all know that I love #plankaday!  And if you don't know that...well now you do!!!  What is #plankaday?  It's exactly what it sounds like!  You do at least one plank every day!  This was all started by two people, Sherry and Mike, because they both hated doing ab workouts.  So they started Plank a day on twitter to keep themselves motivated...and it has grown like crazy!  They have started a Plank a Day Revolution and I'm thrilled to be a part of it!!!  I'm even currently topping the Plank a Day Leaderboard...I'm the #plankaday queen so far this month!

I've been doing a plank a day for almost two months now and I can seriously tell a difference!  I feel like my core is much stronger!  Before planking....I would try to do a burpee and after about two I felt like my abs were splitting apart!  I would always quit because it felt like I was going to pull an ab muscle!  That's how weak I was.  Now...25 burpees at one time is doable for me and I feel strong while doing them!  I also firmly believe that having a strong core will make me a better runner!  And that's my main goal!

So I started tweeting about my #plankaday and formed a support group of plankers on twitter.  We would tweet each other our plank times every day and encourage and congratulate one another!  Well our little group (I think it started with 3 of us) started growing and growing!  We now have so many plankers that we don't have enough characters left to tweet our times because of all the names!  It's a great problem to have because I LOVE encouraging others....so the more the better!  To solve the problem we decided to use the hashtag #planktweeps when tweeting our #plankaday.  That way we could continue to encourage each other but still have more and more plank with us! 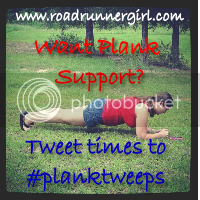 So with all that said....I had a #plankaday personal record on Tuesday!!!  I planked over 3 minutes!!! 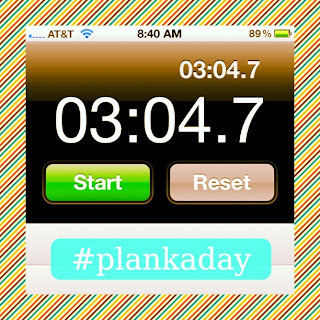 I usually average around 2:20 on a good day and around 1:30 on the days that I run.  I'm not sure what happened this time but I will take it!  I am sooo excited!  My goal is to eventually be able to plank for 5 minutes!  But let me tell you...planking for 3 minutes was soooo hard!  My arms, legs, abs, basically my whole body was shaking!  And I felt like jello when I was finished...but I love that feeling!! :-)

If you are thinking...wow I can't do planks...well you are wrong!  You CAN do it!  All it takes is holding it for as long as you can and working yourself up to longer.  You may only hold it for 30 seconds your first time...that's ok!  The more you plank the better (and stronger) you will get!  SO I encourage you to just do it!  #Plankaday with me!!! :-)

QOTD: What is the longest time you have held a plank?