Today's post is by Angela from Sole Sister On the Run! She talks about the half marathon...which is my personal favorite! Thanks for sharing with us Angela! 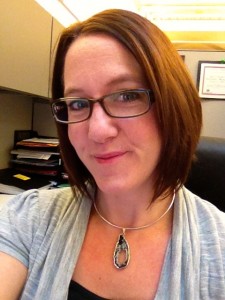 In 2010 when I was trying to make changes and live a healthier life, I decided to try running. I was doing yoga occasionally, but was looking for something more challenging more intense. I needed something that would take me out of my comfort zone and challenge me often. I am an on again off again gym girl and other than spin class, I have yet to find something that holds my interest for long. But running, running was different from the start. I made a deal with myself to at least complete Couch to 5k and run one 5k before I quit.

Along the way, I fell in love with running.

I started with the Couch to 5k program, and initially hated it. Everything hurt and I was not good at it. I stuck with it. I kept going back out there. Somewhere around week 4/5 something clicked. While on a longer interval, I realized I wasn't dying, I could breathe, and I was running. That moment changed everything for me.

In 2011 I signed up to complete my first half marathon in January 2012, the Inaugural Tinker Bell Half Marathon. In 2012 I completed not one, but six half marathons in 2012. My first half marathon was a challenge and invigorating, so was my sixth one. After my first one, I was on a runner’s high for weeks. I needed to make sure it wasn't just a fluke that I ran a half. Was it the crazy crowd support at a Disney race? I started to wonder. I then signed up for another half marathon, a local small race. Not only did I finish, my time was better. It was after the second one, when I was looking for a third race to do that I realized I loved half marathons out of all the distances I've tried. A 5k is short and quickly over. Thanks to my coach/friend, I have learned to use them as a run out after a half or to work on speed. A 10k is okay, but something about that distance makes it hard for me to find my groove, can’t sprint like in a 5k, can’t go the same pace as a half… just always feels awkward to me.

Half marathons, even after six of them still challenge me. It’s out of my comfort zone as far as distance and time spent running. At 2 hours, like clockwork, I throw a mental hissy fit. I want to be done, I am tired, bored with running, hungry, etc. I have to refocus often, I have to pay close attention to my pace and my body. I have to prepare for each half: what to eat, fueling, pace, what to wear for comfort and temps, how to handle the starting frenzy, my playlist… all of it. I spend approximately 2 ½ hours inside my head with myself. I go through the range of emotions when running, I often think I am crazy… but, as the finish line approaches, I feel proud, I feel accomplished, I feel strong, I feel empowered. Though those 13.1 miles try to beat me every time… I win. I cross the finish line with a smile and burst of speed no matter how tired I feel. 13.1 miles is still far enough out of my comfort zone to challenge me. The courses provide hills/flat area/etc and amazing views… so I don’t get bored and I can see how my training has helped me in my trouble areas (hills). I get tired, sore, and cranky… but I persevere. I love half marathons because at every start line I feel a sense of excitement at the challenge and a sense of fear that I will fail this time, but never a sense of boredom or comfort.

I traveled to San Francisco and Philadelphia last year (in Philly I ran with 3 cousins). 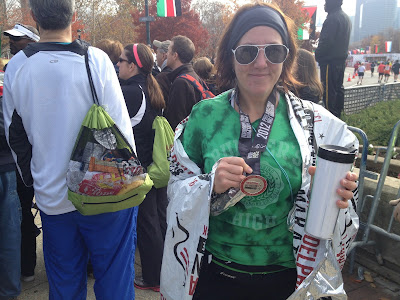 In 2013, to challenge myself and my love of the half marathon, I am going to complete 13 half marathons. Challenge yourself to a distance that scares you. Your success will surprise you!

QOTD: What race distance is the most challenging for you?
Posted by Mindy Bobe at 12:00 AM