One of the things I am most excited about the Walt Disney World Marathon is that I am running all dressed up! Because running is all about the outfit...right?

The group of girls I have been training with and will be running the race with all decided on who we wanted to dress up as when we first decided to run this marathon.

I chose Sleeping Beauty because she is one of my favorite princesses...AND because she is my son Sawyer's favorite princess! He loves her so much that when we went to Disney World a couple of summers ago he begged to see her. And then when we found her he was super shy and nervous! She gave him a kiss on the cheek and he LOVES that picture! 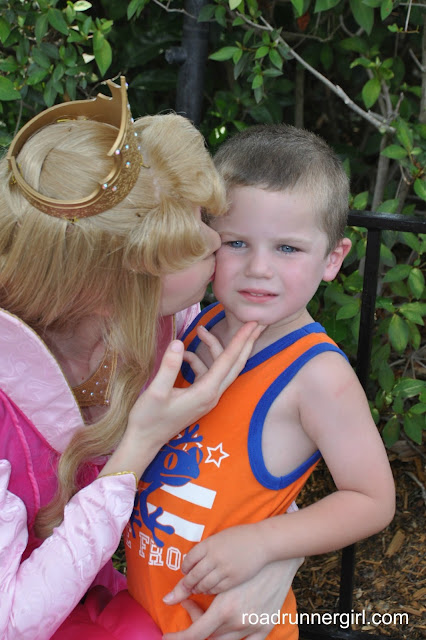 Well I knew from the start that my outfit would include a skirt from runningskirts.com...because that's all I ever run in! So I had to find a pink skirt (yeah I can't believe I didn't already have one). I bought the skirt a while back...and this past weekend I went searching for a tank top to match it. Because looking at the weather...it is going to be quite warm for the marathon. I found a cute Under Armour tank (can I just say that it is super hard to find tank tops in January!) and when I got it home...the pink did not match!!! Now a slight variation wouldn't bother me...but this was way off. The skirt was more of a dull pink and the tank was neon pink! So off to the store I went again (bringing the skirt with me) and I was unsuccessful! None of the pinks looked good with my skirt!!! So...yes...I was panicking!!! It was a week before the marathon and my outfit was falling apart!!!

After some deliberation...I decided Sleeping Beauty was not meant to be me for this marathon. I had a talk with Sawyer...and yes he was upset...but I promised him I would try again next Disney race.

So back to the drawing board I went! Who could I dress up as? I remembered that I had bought a yellow princess skirt from runningskirts.com a few years ago and never wore it during a race. So....which princesses are yellow? Belle...but Angela was Belle. So then I remembered Snow White had yellow. Yay! I started googling Snow White running costumes and came across a blog called This Mama Makes Stuff! This blog is awesome!!! I sooo wish I was this creative!!! And score...she had a post for a Snow White Running Costume Tutorial! I immediately emailed my mother-in-law to see if she could make this (because I cannot sew) and she said she could!

So back to the store I went in search of a blue tank. Success! I found one at Dick's Sporting Goods on clearance for $6.00!!!!  Then I headed to Michael's for some ribbon for the sleeves. All set! 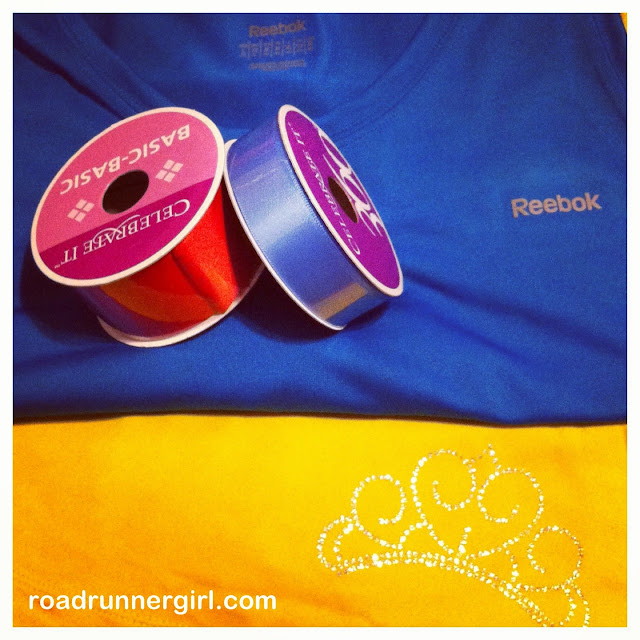 I decided not to do the collar or cape because I figured they would drive me nuts for 26.2 miles! But the cute sleeves were a must!!!

My mother-in-law came over yesterday to make the sleeves. We gathered up all our supplies before we got started. 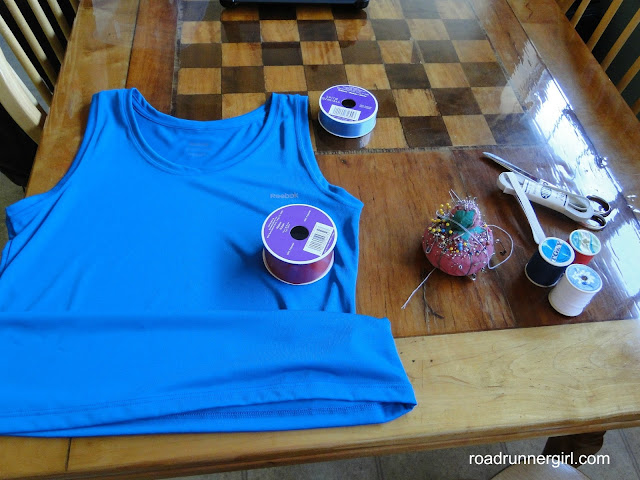 There was tons of trying on my blue shirt, measuring my huge arms, positioning ribbons, and getting stuck with pins (ok just one or two stuck me)! 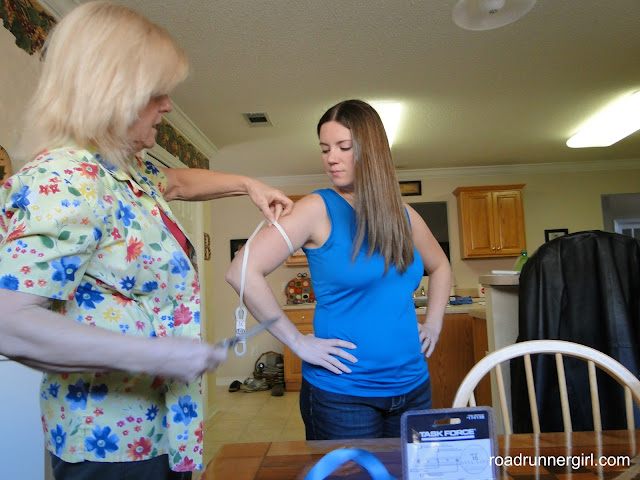 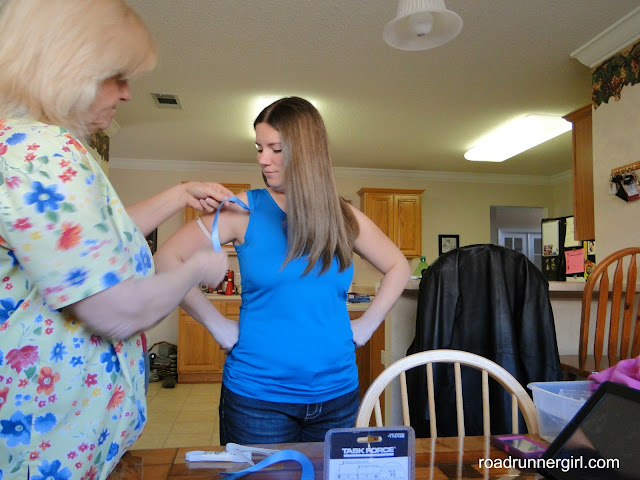 And then my awesome mother-in-law worked her magic! 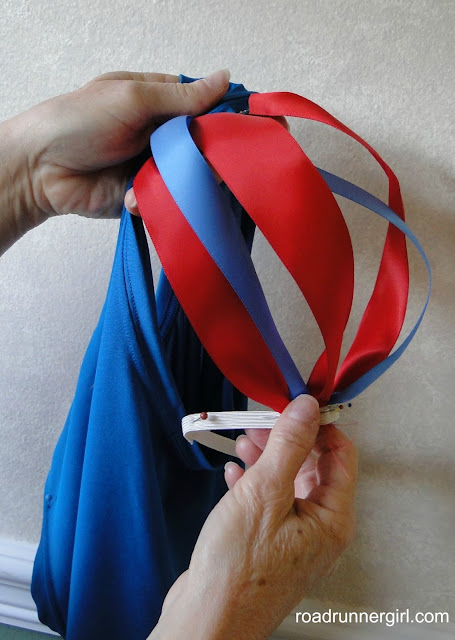 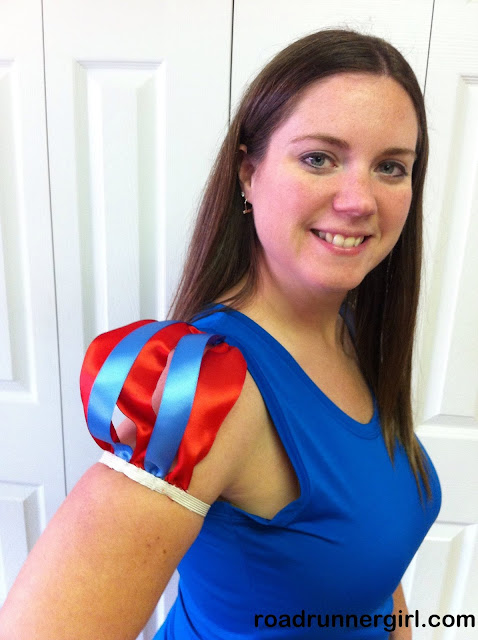 Here's what the outfit looks like all together! I will be adding white compression socks and a solid red (not the red and white one I have on in the pic) headband. I am also borrowing a red bow to attach to the headband from my friend Stephanie's little girls. And...maybe red lipstick! ;-) 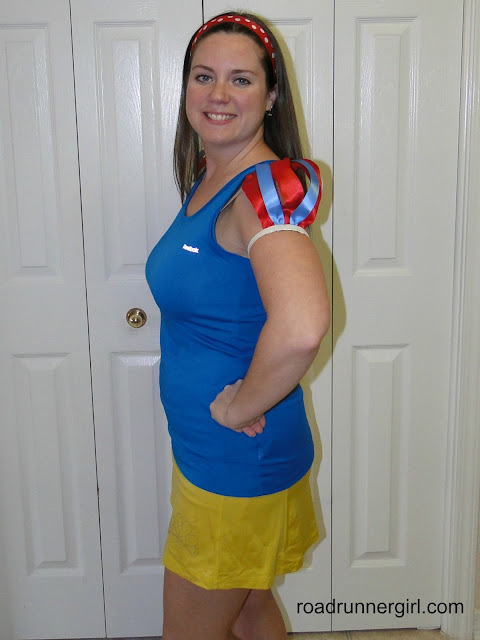 It's simple but I love it! Hopefully I look Snow Whitey enough! ;-)

A very special thanks to Carrie from This Mama Makes Stuff for her awesome Snow White costume tutorial!

And another very special thanks to my awesome mother-in-law Gwen for her awesome seamstress skills! I love you and am so thankful for you and your always willing attitude to complete the crazy tasks I ask of you! :-)

QOTD: Have you ever run a race in a costume? Love it or hate it?