Make sure to read my post about the runDisney Marathon Expo!

My alarm woke me up at 3 AM race morning. I didn't sleep very well (I never do before a big race...too excited) so getting up wasn't too difficult. I got dressed and got my bagel with peanut butter and banana ready. My plan was to eat the bagel on the bus and eat the banana in the corral about 15 minutes before start time. 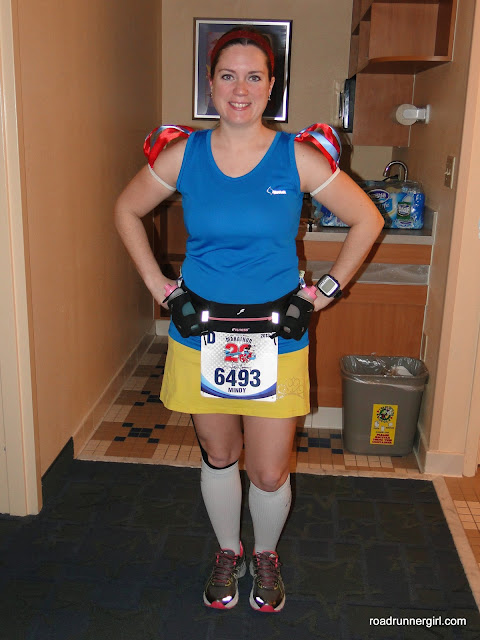 We headed to load the bus around 3:30. There was a line but it wasn't too long and it moved very fast. It gave us time to take a group picture. I think we all looked great! 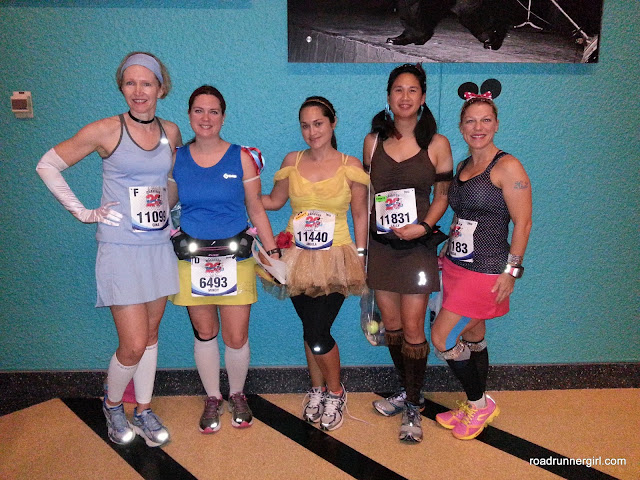 One thing that worried me before this race was the weather. We had been training in an average of 30-40 degree weather. At start time it was in the high 60's and would be in the 80's by the time the sun came out. And it would be super humid. I don't think I was the only one worried because runDisney had these signs posted everywhere! 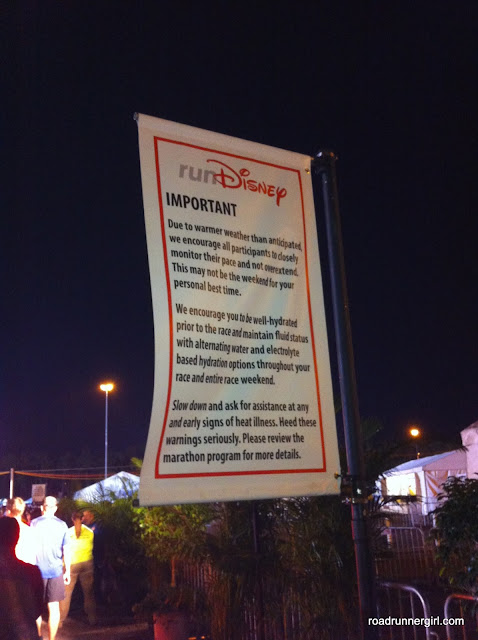 I've run Disney races before so I knew not to linger too long at the start area. We still had about a 20 minute walk to our corral. We took a few pictures and then headed to the corral.

Me and Paigey! We have a tradition of getting a picture together before every race! 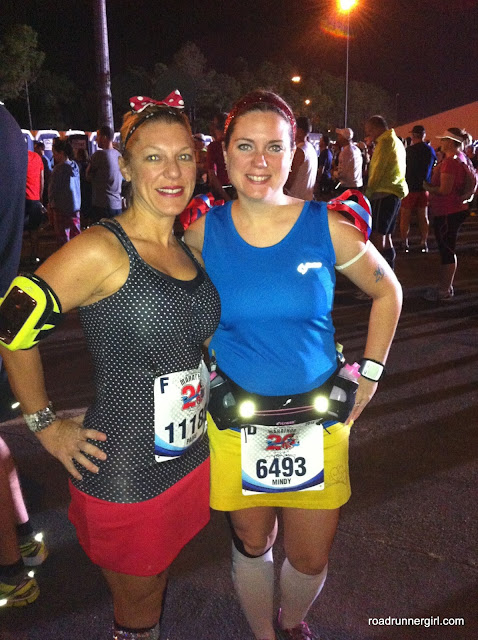 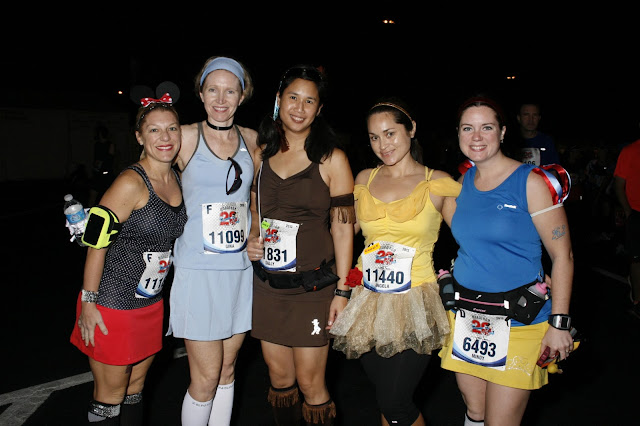 We made it to our corral and some of my friends decided they wanted to use the restroom one more time. I didn't need to go...but I regretted not going later on. Finally corral A started and we waited for E to begin. Around 6:10 it was our turn! One of my favorite things about runDisney races...they shoot off fireworks before the start of every corral! 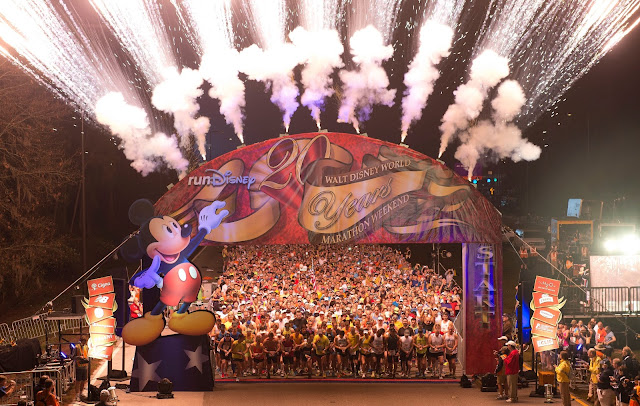 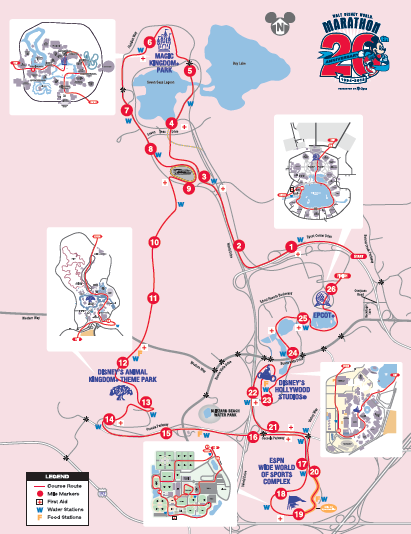 We all started out together of course. We couldn't run 5 people across (it was way too crowded for that) so it was me, Gina, and Angela beside each other and Paige and Sally behind us. We came to the first water stop around mile 1 and that's where we lost Paige and Sally. :-( It was sooo crowded and congested and we ended up getting separated even though we didn't stop for water. Right away I knew Paige's prediction was going to come true. Gina and Angela are faster runners than me and would eventually take off. But I decided to enjoy their company as long as I could.

Since I've ran the Princess Half the past two years I was very familiar with this part of the race. I told Gina and Angela about certain picture opps that I knew would be there. We passed the pirate ship but Gina and Angela didn't want to stop yet for pictures. They thought the line looked too long even though I assured them the lines moved fast. So we kept going.

We made it to the Magic Kingdom parking lot entrance around mile 3. I knew the speakers would be telling us, "Runners...caution...speed bumps ahead!" I love how runDisney is so protective of their runners! 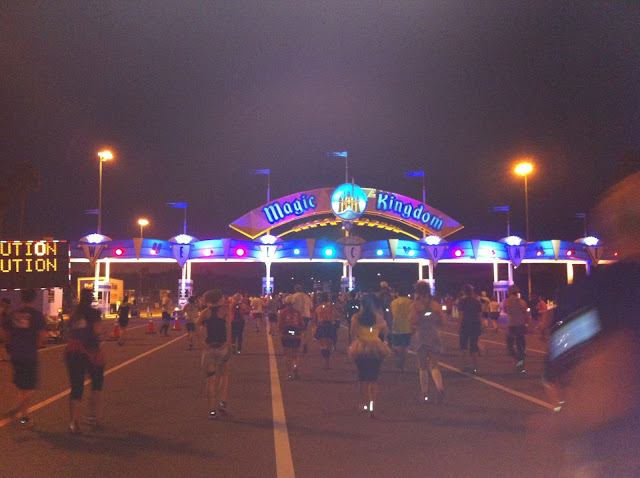 We ran in the parking lot and passed by the Speedway....we could just see the tops of runners' heads as they were already running in there. I knew we would get there around mile 8!

The route took us up a pretty steep hill under the water bridge (and the DJ on top of the bridge was amazing) to the Ticket and Transportation Center. We made it to mile 5 right outside of Magic Kingdom!

Yes I have a picture of some random guy but I was just trying to get a picture of the sign! He jumped in my picture!!! 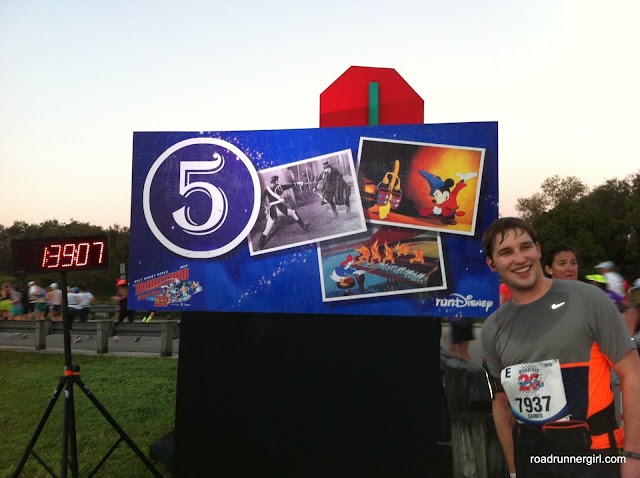 We finally made the turn onto Main Street USA! And the crowd as always was amazing! It was so loud from all the screaming and cheering! And of course seeing Cinderella's castle was magical! There were tons of character stops in the Magic Kingdom but I could only talk Gina and Angela into a few. 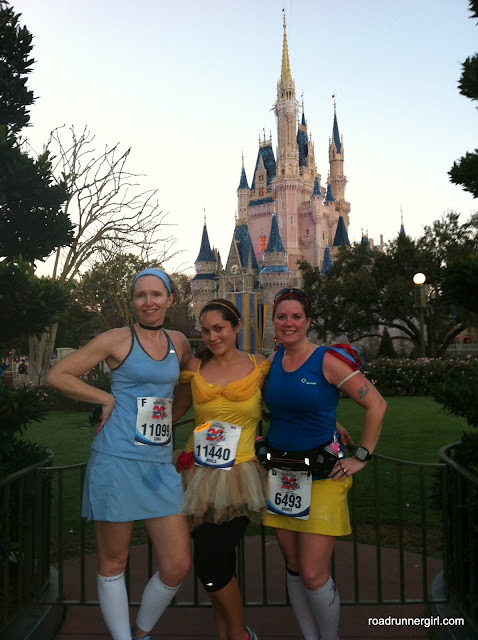 Running through Cinderella's castle never gets old! And it is beyond magical! I love it! 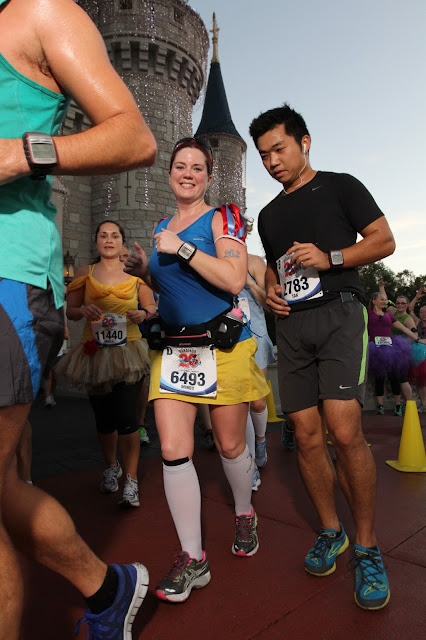 I told Gina and Angela I was going to stop for a professional photo in front of the castle. I have always wanted this photo and never have stopped! This time I was stopping! They made me so happy because they stopped with me!! 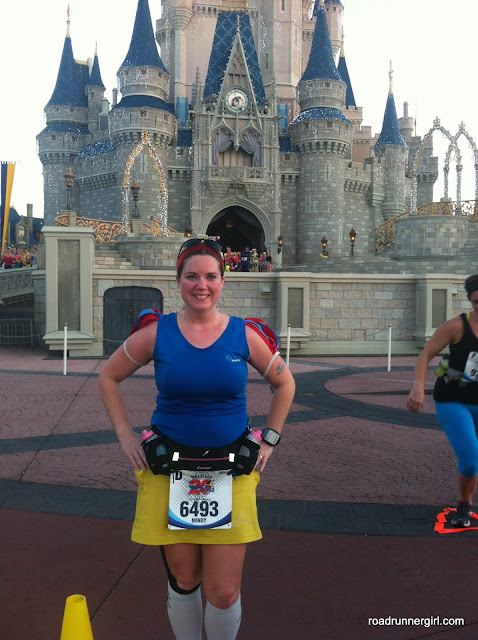 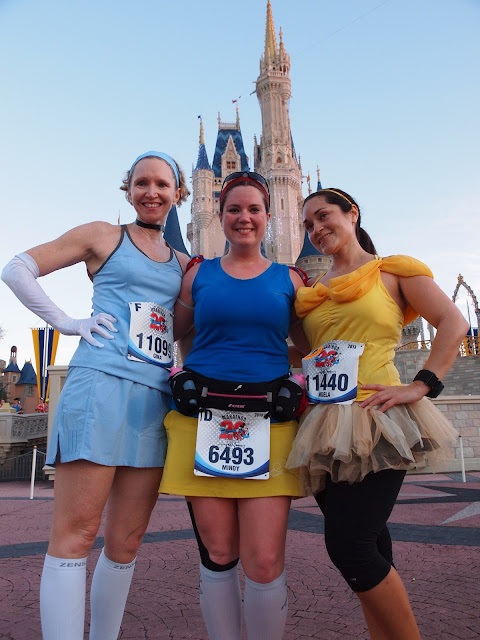 We headed towards Liberty Square. And when we reached Frontierland guess who we saw? Jessie from Toy Story! 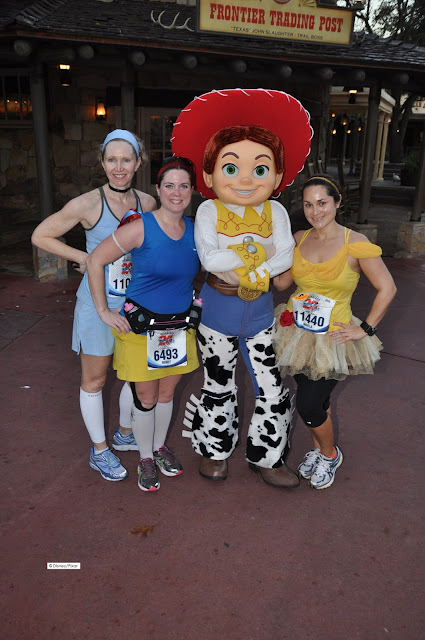 All too soon our time in Magic Kingdom was at an end. We headed down Floridian Way and about mile 8 we turned toward the Walt Disney World Speedway! We had speakers cautioning us about a steep downhill ahead. And man it was super steep. Everyone stopped to walk because it was too dangerous to even try to run! We made it out on the race track and it was so awesome!!!! They had lots of cars lined up on the side with spectators cheering us on! And even Tow Mater, Lightning McQueen, and Finn McMissile were out there! 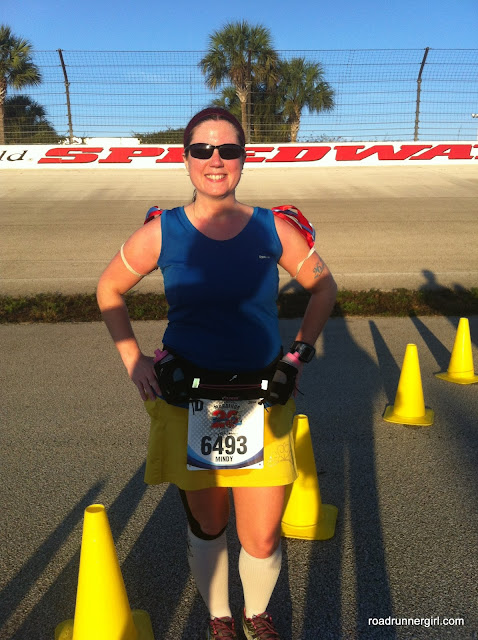 While running on the speedway I saw portalets without a line. I had to go! I wished I had gone to the restroom one more time before the start because I ended up needing to pee around mile 1 lol! It didn't take long and we were on our way again.

We turned out of the speedway and this is where the long stretch to Animal Kingdom began. We ran about a mile and then I saw mile 10! Yay! 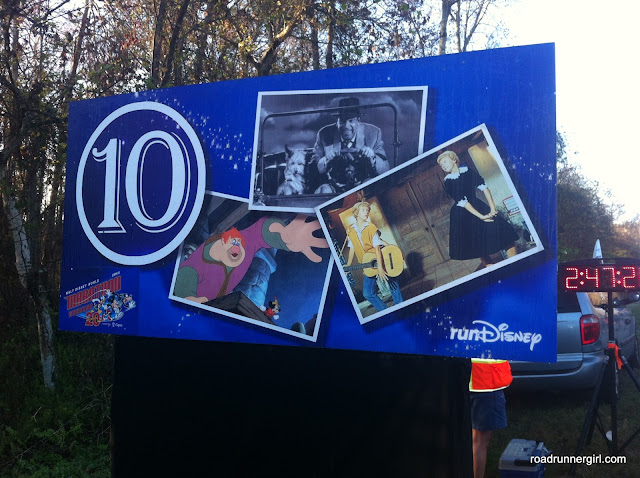 I was feeling great! But in the back of my mind I kept thinking if this was a half I would almost be done. Around mile 11 I lost Gina and Angela. Paige's prediction had come true...I was by myself. I stopped to walk a second and called Paige to see where she and Sally were. They were at mile 9. While I was talking to her I heard someone call my name...it was Rachel from Runners Tales! I waved to her and finished up my conversation with Paige. I started running again and decided I was going to have fun even though I was by myself. I saw Peter Pan and Wendy up ahead and had to stop for a photo! 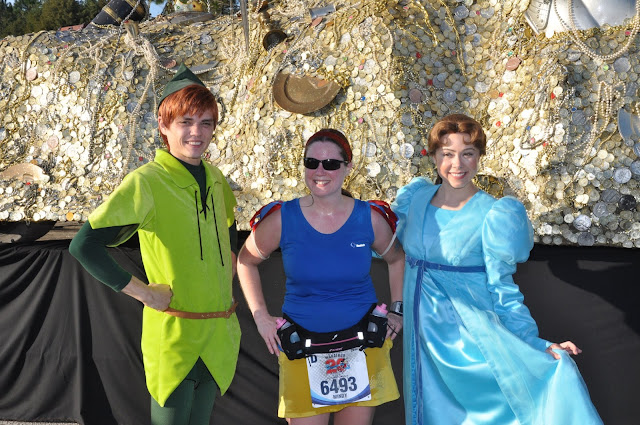 Not long after that I saw Pocahontas, Meeko, and John Smith! 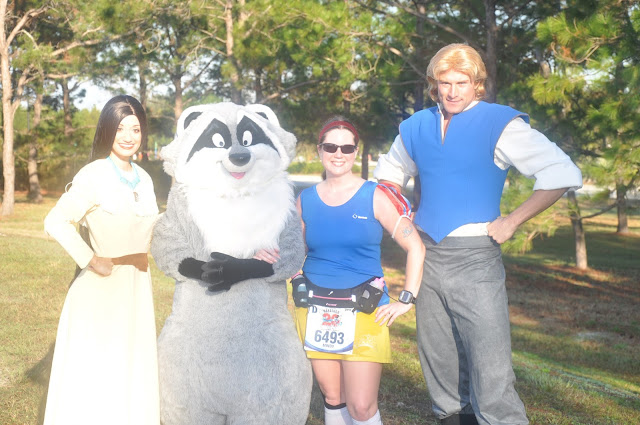 I caught up to Rachel again right before entering the Animal Kingdom and decided I would run and talk with her for awhile. I needed some company!

Right before entering Animal Kingdom there were cast members with a few animals out that you could take pictures with. I didn't stop but thought it was cute seeing the animals!

As soon as we entered Animal Kingdom we saw Rafiki from The Lion King! He is one of my all time favorite characters so I told Rachel I had to stop. She stopped with me. 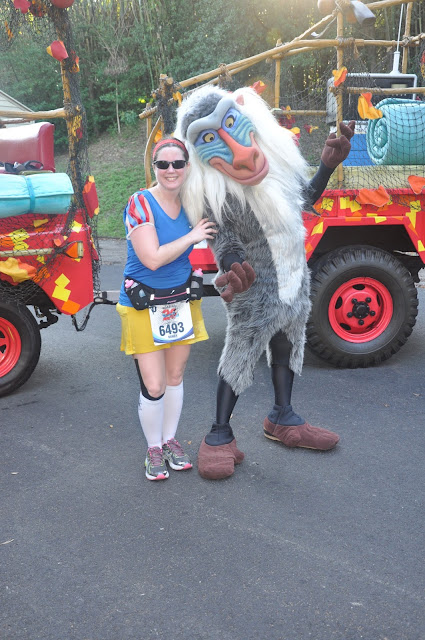 I wanted a picture with Rachel too since she was helping me get through these miles. One of the cast members in Animal Kingdom took this picture for us! 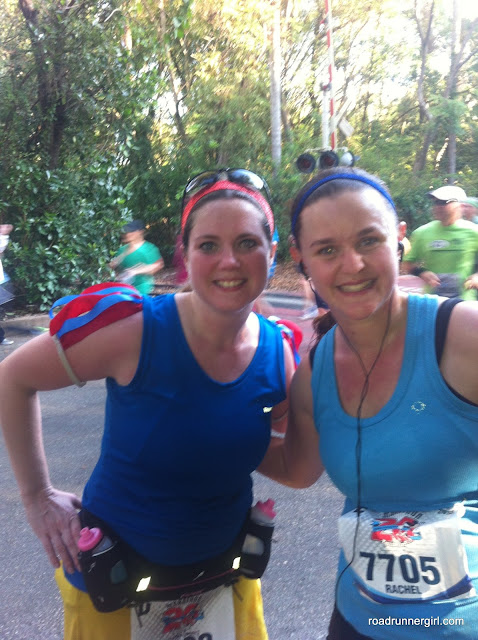 We also had to stop when we saw Minnie Mouse (my favorite!!!) and Daisy Duck! 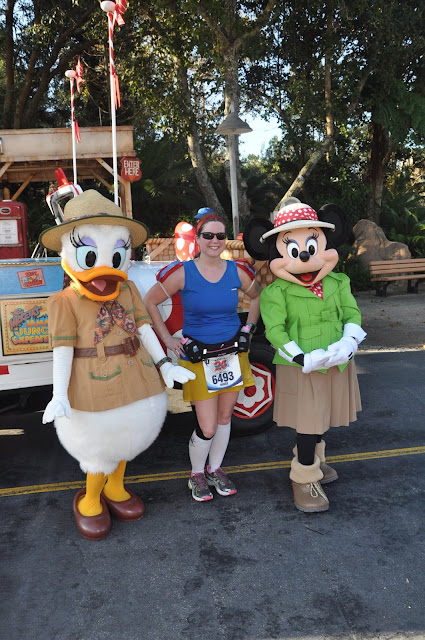 We made it to Expedition Everest and came real close to getting on the ride. They were letting runners get to the front of the line and ride. But Rachel and I weren't sure if our legs could handle sitting and then having to run 13 more miles so we decided not to do it.

Rachel was doing a run-walk method...she was running 3 minutes and walking 1 minute. So I started doing this with her. I was so happy to have someone to run with! Right outside of Animal Kingdom we hit the 13 mile mark! I was sooooo happy to be halfway done!!!! 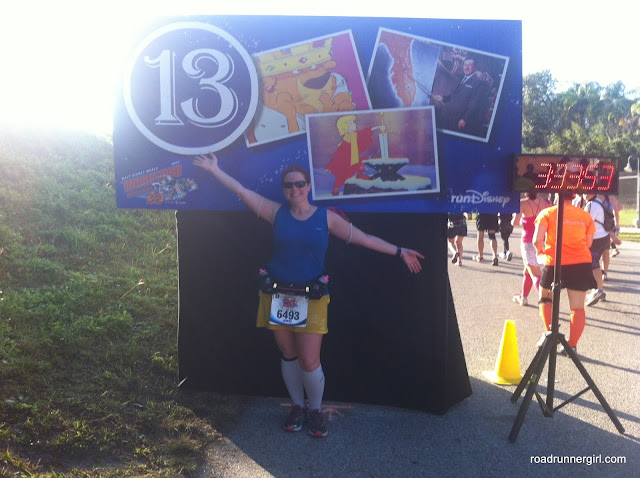 But running another 13.1 miles also seemed impossible. I was feeling great as far as my legs (no knee pain either) but the sun was out in full force and it was getting hotter and hotter and more humid by the second. I was drinking water and powerade at every water stop as well as out of my water belt bottles but I could feel myself getting dehydrated. I was so thirsty!

Stay tuned for part two of my recap...

QOTD: Do you prefer to run alone or with someone?