Saturday the plan was to run 6 miles with Holly. We've been enjoying our long runs together and we were both excited about running again this weekend. The forecast called for rain but it was only a 30% chance at the time we would be running.

I went to bed at a decent hour on Friday night. But around midnight Hayden came into my room and scared me to death! I was in a deep sleep! As soon as I saw him I knew something was wrong...and I said a quick prayer it wasn't the stomach bug (it's amazing how that thing always hits in the middle of the night). I was relieved when he told me what was wrong...he was only coughing and wanted some cough medicine. I was able to fall back asleep pretty quickly after that.

My alarm went off and I got up. I immediately checked my phone and had a text from Holly saying there was rain on the radar, our other friends had cancelled their run (which was an hour and a half earlier than ours), and she was going back to bed.  I checked my radar...it had light green rain but the hourly forecast showed only a 10% chance. I looked out the window...no rain. I decided to go back to bed anyway.

I laid there for about 10 minutes. I couldn't go back to sleep. And my mind kept telling me to run. The forecast for tomorrow morning had even a greater chance of rain so this would be my only chance to run. Plus...I just really wanted to run! So I got back up, got dressed, and headed out. 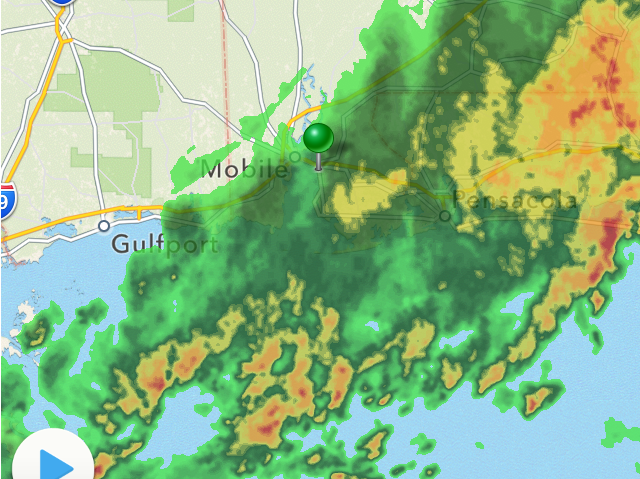 I made sure the hubby's ringer was turned on in case I got stuck in a thunderstorm. I put my phone in a ziploc bag to protect it from water. I grabbed my old ear buds in case I got rained on and the water ruined them. I had a plan to run at least 5 miles if I could. I was ready to run in the rain!

The first mile was dry. It was cloudy and there were puddles everywhere (from earlier rain) but so far so good! The temperature was right at 73° so it felt wonderful! And then I started feeling a drop or two of rain. Eventually the drops came down at a steady pace...but it was only a light rain thank goodness! 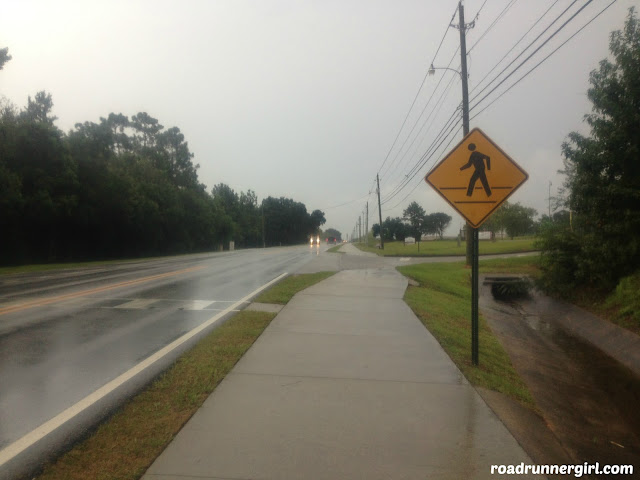 Around mile 2.5 I saw my friends Gina and Angela! They were at mile 13 of 16 miles (training for the Chicago Marathon)! They were running strong! It was great to see them!

The run felt great! And the rain didn't bother me a bit! Normally if I'm going to be running in the rain I will wear a visor, but I forgot it. Luckily the rain didn't get in my eyes too bad.

I was wearing my water belt so I kept reminding myself to drink water so I wouldn't get dehydrated. Even though the air was cool I knew I still needed to drink water. Normally I would stop about halfway and take a short water break but I didn't stop at all during this run. I just kept sipping as I was running.

At mile 4 I decided I was going to run the full 6 that I had planned to run with Holly. I was already soaking wet and there wasn't any thunder so another mile wouldn't hurt!

Not one time did I feel tired during this run! I felt great the whole time! Maybe I should wish for rain for every run lol! ;-)

The only thing that bothered me during this run was my ear buds! They kept falling out of my ears!!! I'm not sure if it was because they were wet or what. But I know I will never wear those again for a run! 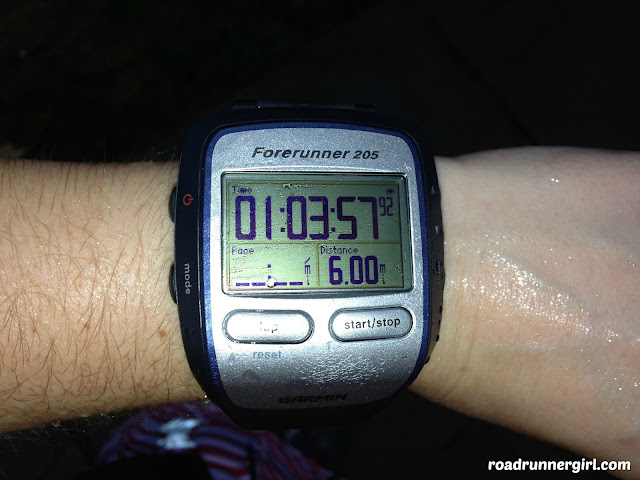 I was also excited that I wasn't the only one out running in the rain! I saw 10 other runners out that morning and a group of bikers! I'm not the only crazy one lol! 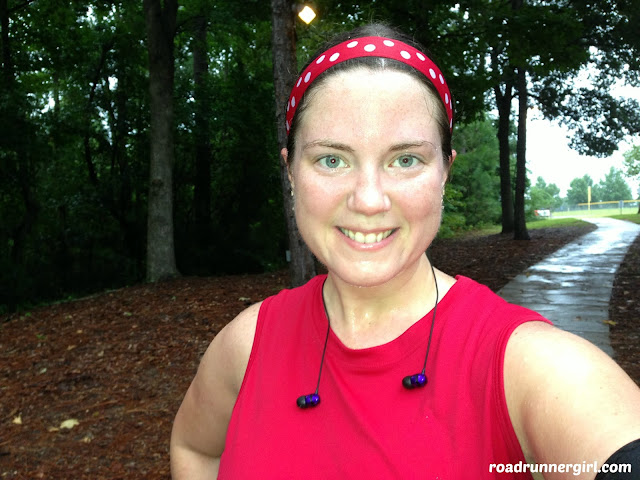 I'm so glad I went ahead and got up and ran that morning! I always enjoy running in the rain!

QOTD: Do you like to run in the rain?