I left you yesterday with my first day in Memphis. I want to tell you all about my 2nd day too. I'll tell you about the rest of the day in a later post. The morning of the second day included a tour of the St. Jude Children's Research Hospital...and the tour itself deserves its own post!

I will tell you that this tour was very emotional. I didn't expect to see any of the kids. I thought we would be separated from all of that. But I was wrong. Everywhere I turned there were kids. Most of them were riding in little red wagons...some had masks on to protect them from germs. It was a very sad sight. But what surprised me was that these children had smiles on their faces. You could tell that St. Jude tries to make it a happy place. It was amazing! I took a ton of pictures...so you will see a lot. Our tour guide was awesome! She told us tons of stories!

When we got there we immediately saw the statue of St. Jude in the front. 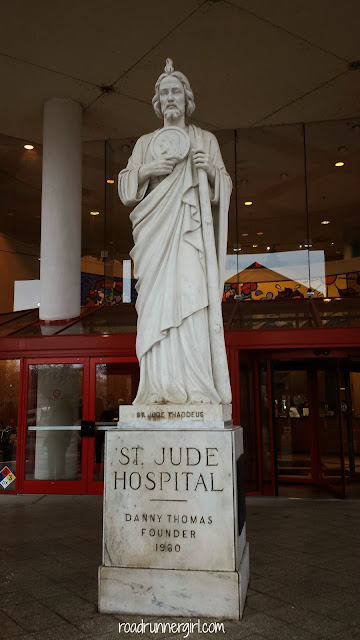 We entered the hospital and it did not look like a hospital at all! It was very cheery! I noticed all the color around me! There were paintings everywhere! It was very kid friendly.

Our tour guide said that St. Jude wanted it to be a place where the kids felt comfortable. They put tons of details into the interior design of the hospital. Just look at the ceiling...it looks like clouds! 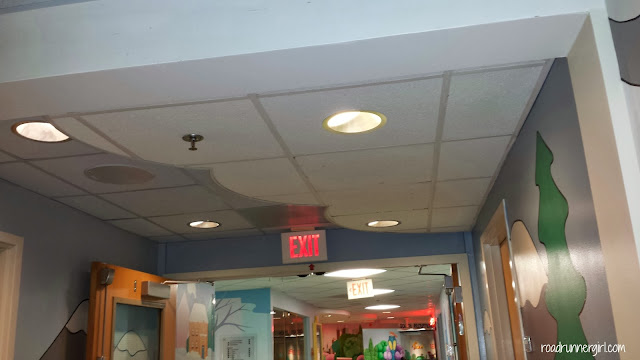 There was also a chapel. Our tour guide told us a story about a child whose mom was engaged but when he got sick they postponed the wedding. The child wanted them to be married so he arranged it all and they got married in the chapel! St. Jude goes out of its way for these patients! 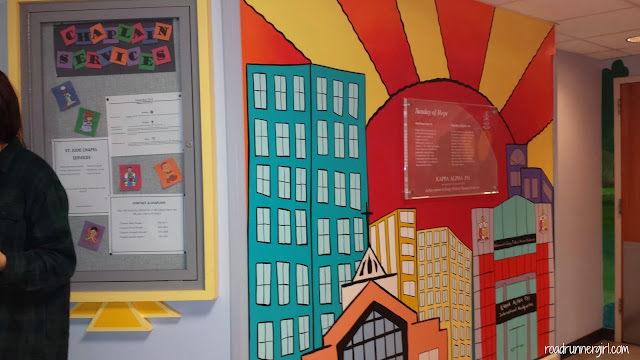 Just look at this waiting area and the hallway of the hospital! Definitely doesn't look scary (which is how most kids perceive hospitals). 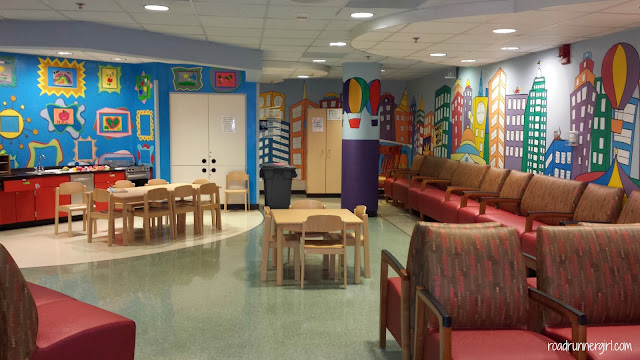 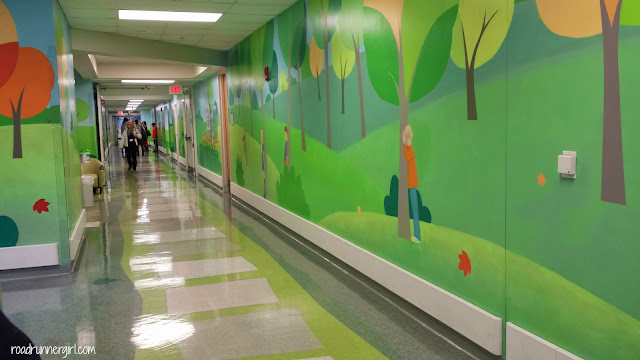 This was a neat area dedicated to the founder of St. Jude...Danny Thomas. When he died many editorial cartoonists expressed their sympathy with drawings that appeared in many newspapers around the country. This was the drawings that were donated to his family as a memorial. 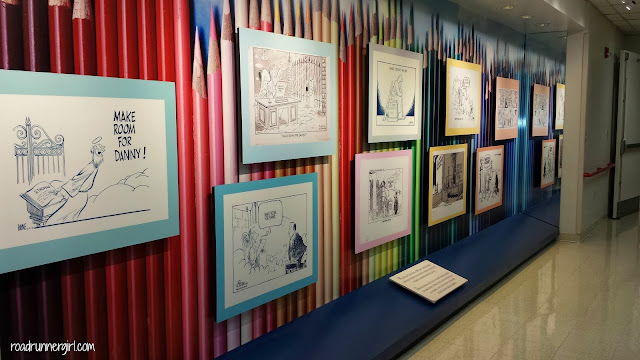 This is the bust of Danny Thomas, the founder. Our tour guide told us it was good luck to rub his nose so we all did that for luck for our race. 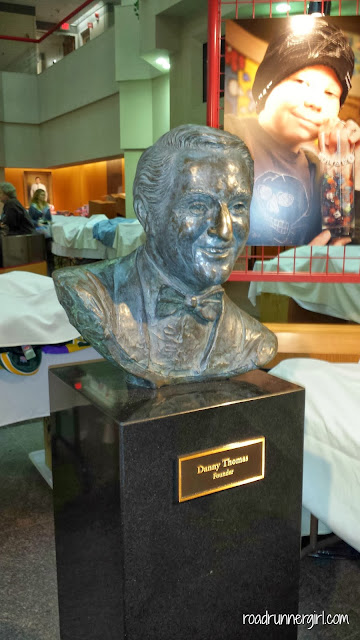 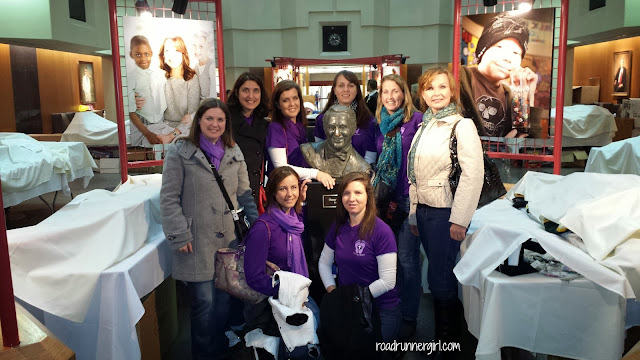 In this same room we looked up and saw flags that represented the doctors and researchers that work or have worked at St. Jude. 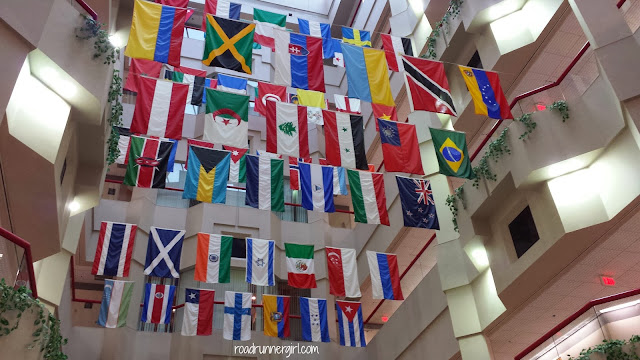 Next we visited the cafeteria area. Our tour guide told us that everyone ate together...doctors, nurses, patients. They aim to make it feel like a family. They have the freshest food. They get their produce from a local farmer's market and their meat is all organic. They have kid friendly food like mac and cheese. She told us a story about one little boy who wouldn't eat the mac and cheese. He only liked his grandma's mac and cheese. So the chef got the grandma's recipe and made it for the boy! So awesome! 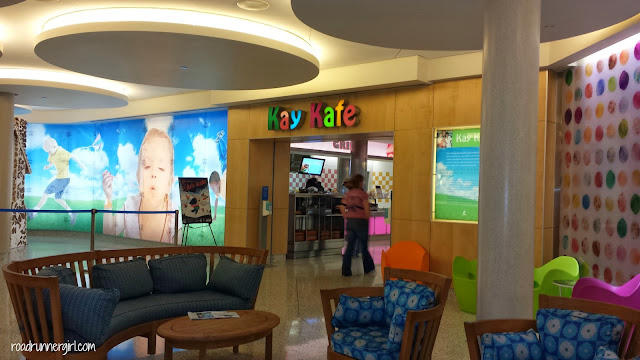 For Christmas they have a huge gingerbread house! It was all real icing and ingredients! And the dog was modeled after one of the patient's dogs! 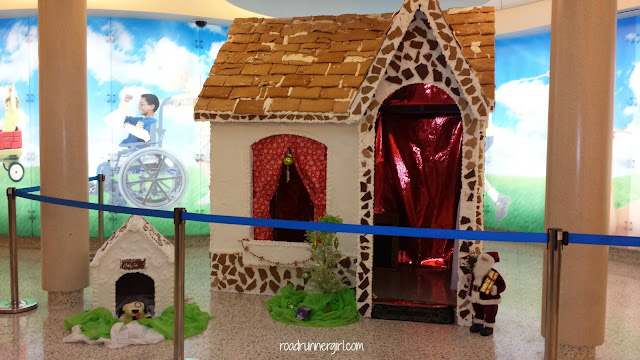 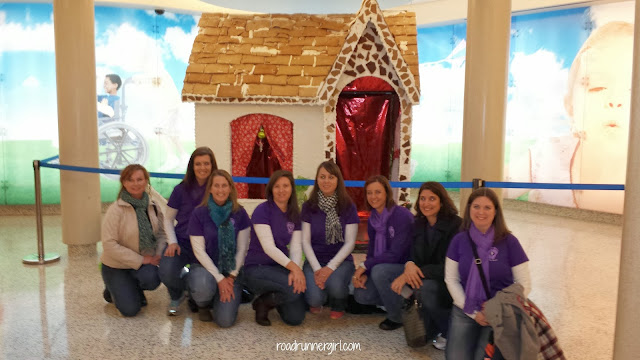 The next area was very emotional. It was the wall of the St. Jude ABC's of cancer. It was where a patient took a letter and wrote a poem or thoughts about their chosen word. It all centers around living with cancer. The letters are changed every so often but sometimes families ask for their child's letter to be kept or to be taken down. 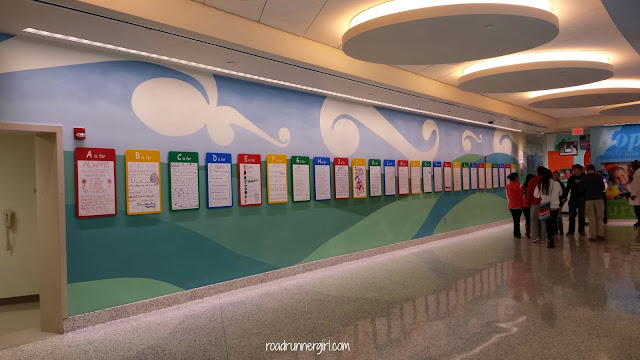 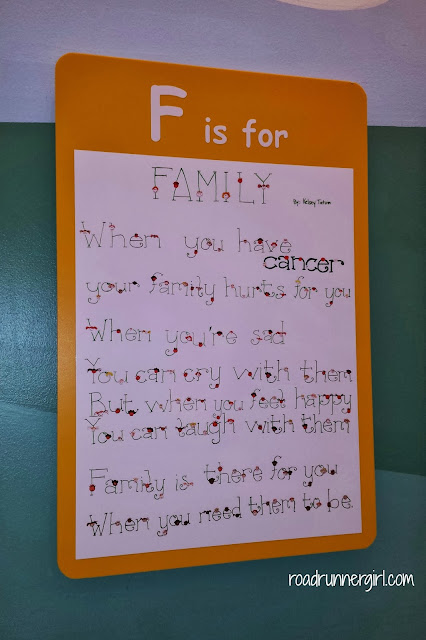 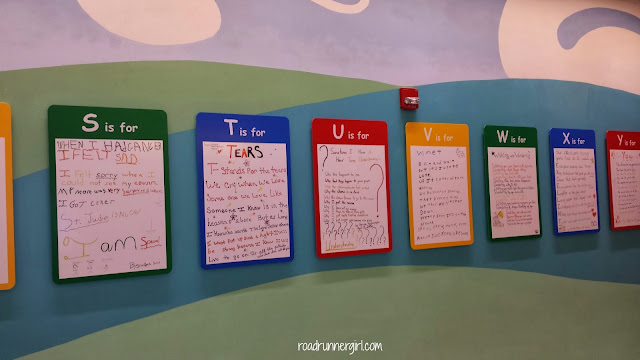 This mural was also near the ABC's. I loved it! 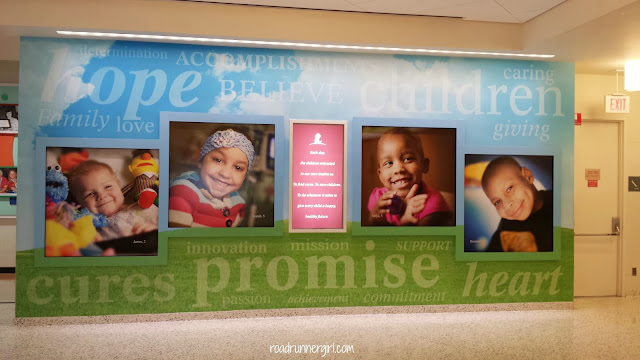 The next hallway we went into was emotional too. Here were pictures of former patients holding a picture of themselves when they were a patient. Wow! 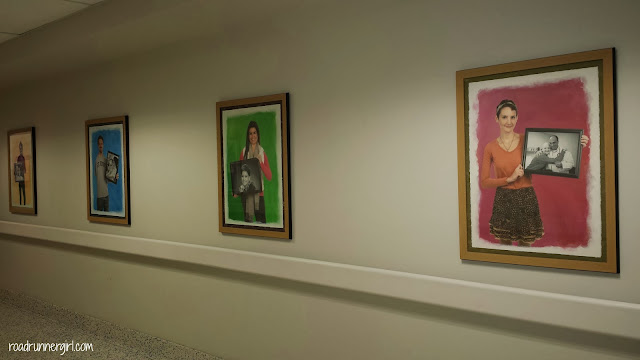 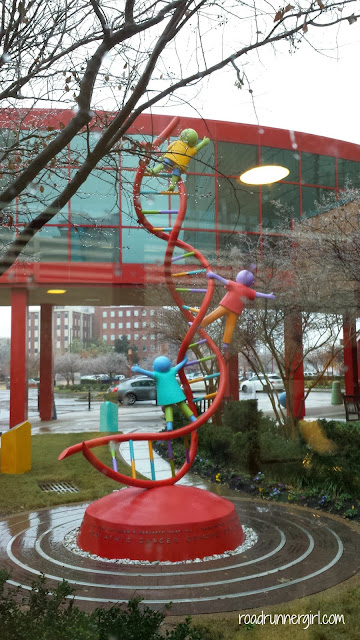 Here are some other waiting areas in the hospital. Again...very kid friendly. 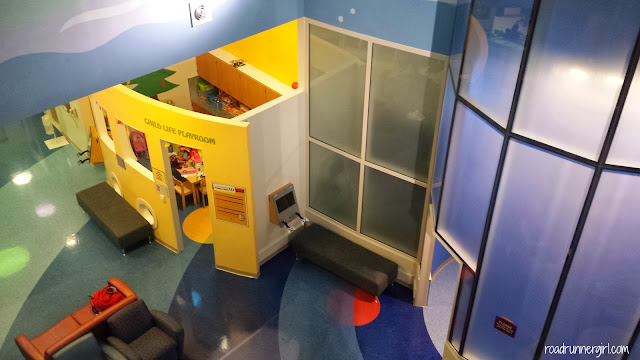 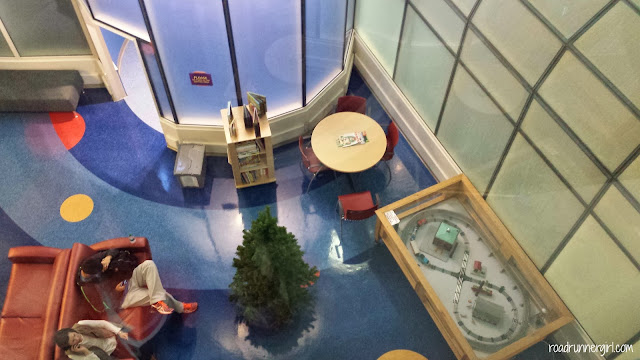 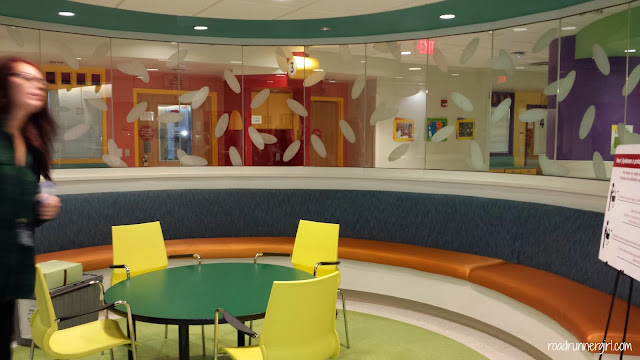 The Today Show always does a lot for St. Jude. This was newly painted by the ABC wall. 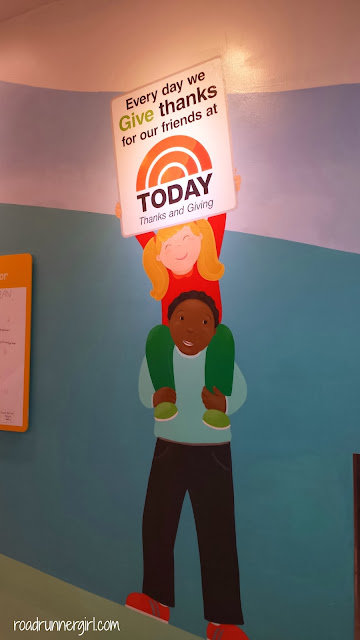 This tour was amazing! One thing that really stood out to me was how St. Jude tries their hardest to make things as easy as possible for the patients and their families. They have a dentist, doctors, and teachers on site so that these children and their families don't have to worry about anything. If they have a cavity...no problem because the dentist is there in the hospital. Teachers are there to make sure the patients don't fall behind in their classwork and to ensure that when they go back to school that they will be ready.

No patient ever pays anything at St. Jude, including lodging, travel, and food. It takes $1.8 million a day to operate St. Jude...and 70% of the funds come from the public. Our tour guide said she has no idea how the hospital is able to function...but it just does. I wanted to tell her it is a God thing! ;-)

I cannot even begin to express how amazing St. Jude is! I am so honored to have been a St. Jude Hero! I am so very grateful for all of you and your generous donations! It truly is for such a good cause!

If you ever have the chance to tour St. Jude...definitely do it! It will touch you tremendously!

QOTD: Have you ever toured St. Jude? Or any organization like it?