The St. Jude Memphis Race That Wasn't in Memphis

I'm going a little out of order here but I can't wait to write about this part. Just in case you missed it be sure to read all about my first day in Memphis which included the race expo and about my tour of St. Jude Children's Research Hospital.

I was at the Pasta Party (which I can't wait to tell you about too...but in another post) when we started getting text messages from our friends asking us if the race had been cancelled. We hadn't heard anything like that so I pulled up the race website and sure enough...the race had been cancelled! About 5 minutes later the St. Jude CEO got on stage and made it official.

I had so many different emotions running through me. I had worked so hard overcoming injury to get to this race. I was sad that I wouldn't get to run a race that I'd been wanting to run for so long. I was super sad for my friends who this would be their first half and first full marathon. But...I totally understood the reasons why they cancelled the race too. It wasn't safe. The roads were icy. And half the volunteers, police force, and medical personnel either couldn't travel there due to the weather conditions or they were dealing with the after effects of the weather. You just can't put on a well or safe race without all those people! So I came to terms with it pretty quickly.

Because we couldn't run...we decided to head home a day early. And...we decided to go ahead and run our race...at home! They were mailing us our medals...and we wanted to actually earn those medals.

Even though our race in Memphis had been cancelled...we were still doing what we loved! We were running with our friends! We wore our race singlets and our race numbers. And several of our Sole2Soul Sisters that weren't running...made this day so special for us. They woke up early and organized and manned water stops for us. They made posters for us. They met us at different points of the route to cheer us on. They even made us a finish line! It was soooo amazing to know we had such great friends who cared!

The first few miles for me went like always...they were miserable because I wasn't warmed up. But I tried not to think about that. This run was for those sweet kids of St. Jude.

A few miles in and we heard a sweet voice (it was dark still so we couldn't see). It was our sweet friend Bridget! She was on her bicycle and was there to ride with us! So awesome!

We were running and in front of us we saw a car stopped on the side of the road with their headlights on. We were a little leary but once we approached we saw who it was...our friend Christina and she was holding a sign for us! What an awesome sight! 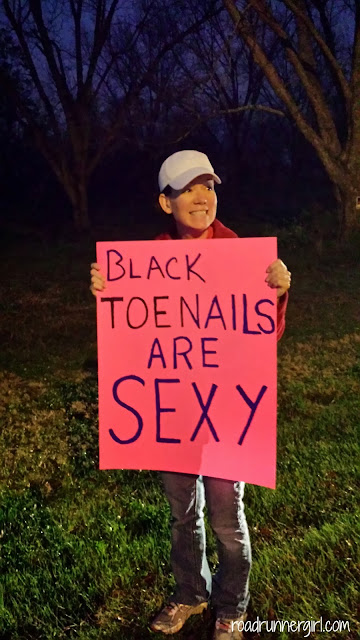 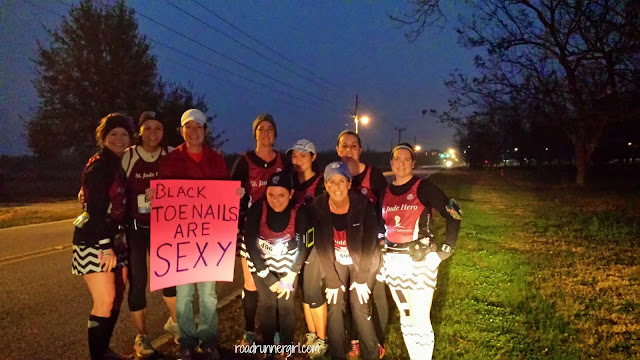 That was a great push for us to keep going! Especially the marathoners! So we kept running through a familiar neighborhood. A few miles later we saw another sign! 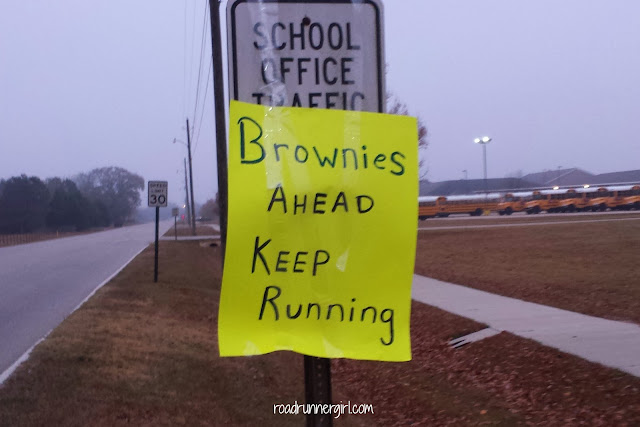 We were approaching one of our water stops and guess who was there? Christina again! And she wasn't lying about the brownies! She had brownies, crackers, pretzels, and water for us! And she had music to keep us motivated! 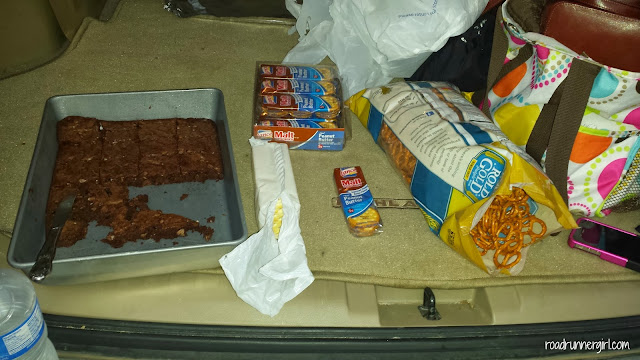 It was the BEST WATER STOP EVER!!!! Thank you so much Christina!!! 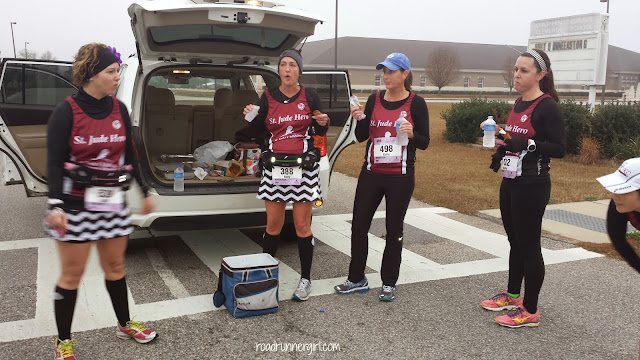 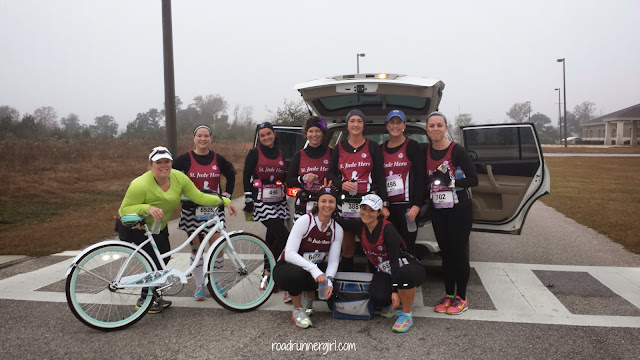 Finally we started running again. Believe me...it was hard lol! I wanted to stay with the brownies! But thinking about those kids at St. Jude helped me get going again.

Running was going great so far. The knee and hip were not hurting a bit! At around mile 8 though I started hitting a wall. Due to my injury I had not run farther than 7 miles in about a month. So mile 8 was tough. But my friend Bridget rode her bike beside me and talked. She got me through that wall and I'm so grateful!

We got to our next water stop and I was so thankful to only have a few miles left! 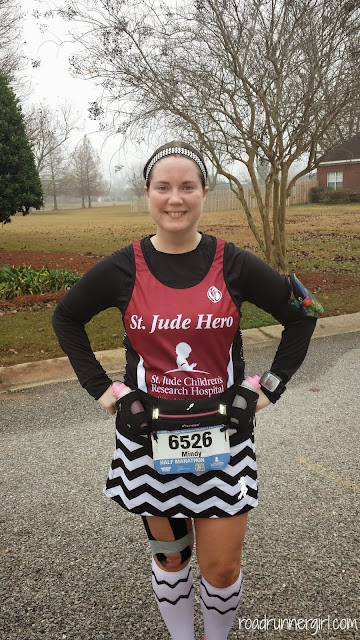 We only had a few miles left to go and all of a sudden we saw more of our friends! Donna and Jennifer had come out to cheer us on! It was great to see smiling faces! I was ready to be done. I was tired. But I was thankful that my knee felt great. We gave quick hugs and kept running. Around a mile later we saw Donna and Jennifer again...at our last and final water stop. They played some music for us to help motivate us. I think we were all struggling. But we were almost there!

The last two miles were the toughest for me. But I looked on the side of the road and saw some more signs that our friend Megan had made for us! I really needed those words of encouragement (even though they were more for the girls running the full)! But I've ran two fulls...so I knew it was much tougher for them at this moment than it was for me. 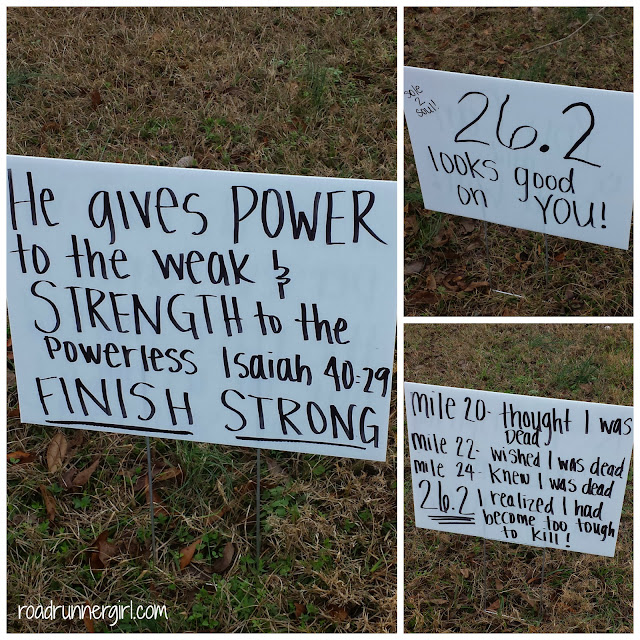 Finally I saw the neighborhood we would be finishing in. And who was at the entrance? One of my best friends Paigey!!! I teared up when I heard her cheer for me and when I saw her face! It meant so much to me that she was there! And her sweet boyfriend snapped a picture of me as I turned into the neighborhood to run my last half a mile! 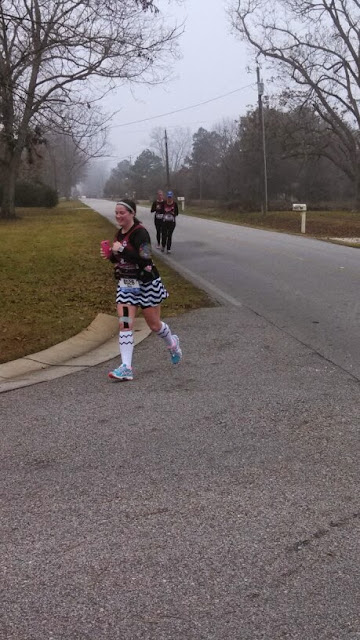 I had to pass the "Finish Line" and run to the end of the cul-de-sac and come back to make my 13.1 miles. My friend Kelly (who had run the half with us that day too) took a picture as I was coming in to the "finish line." 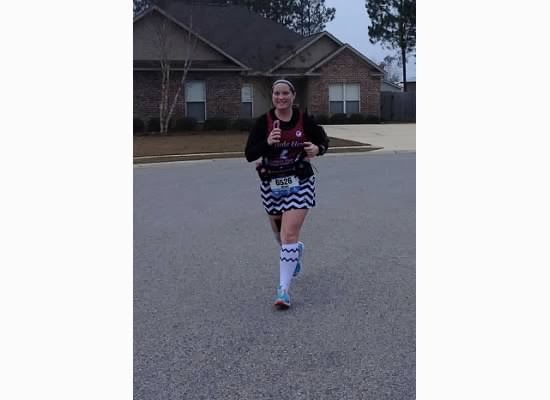 The finish line was awesome! It consisted of two very cute kids holding the ends of a jumprope! So special! I immediately went to Paige...and even hugged her all sweaty (sorry Paige)! 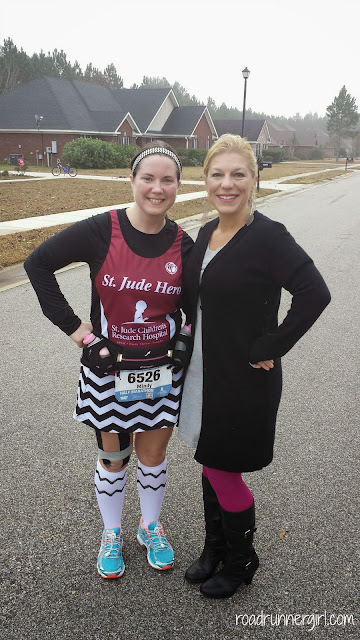 Some of our awesome cheerleaders!!! 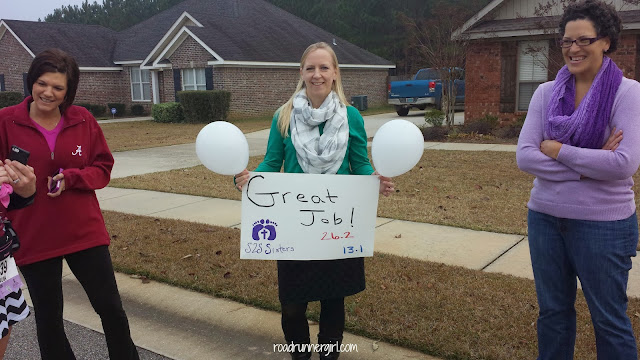 We watched the rest of our runners finish their race! It was so awesome to see my friends Holly and Holly finish their first marathon! Our sisters even got them a medal!!! 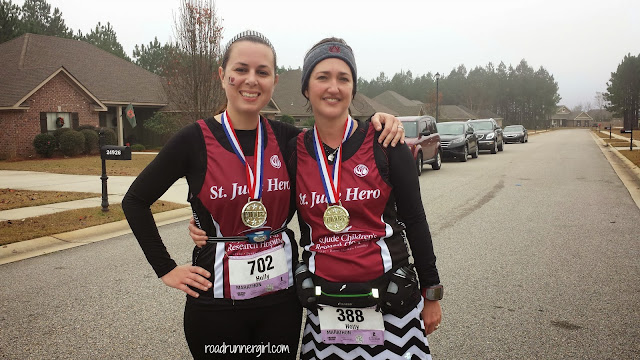 Here are all the awesome finishers of our St. Jude Half and Full Marathon here at home (minus one who had to leave early)! 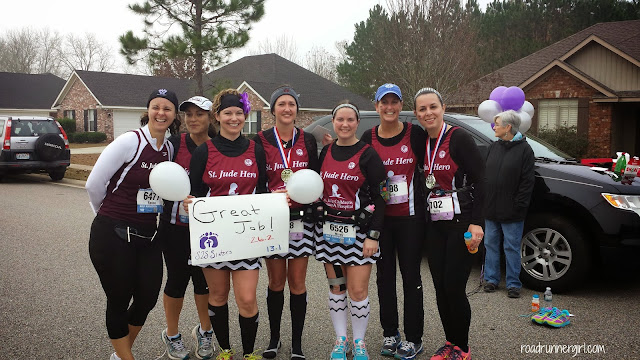 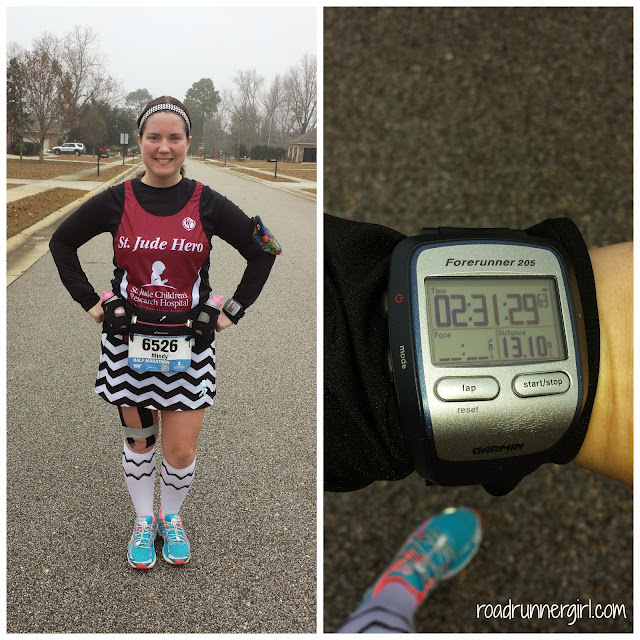 My friend Donna gave everyone a card with a sweet little charm inside! I love it! Thanks so much Donna! 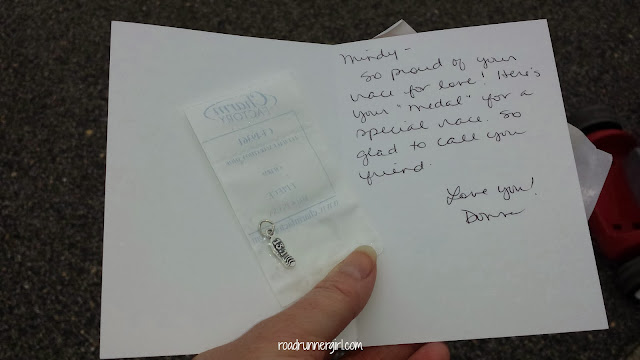 I also had my prayer bracelet for this race. I wrote something to praise God for or pray about for each mile of the race. I've never done that before but LOVED it! It really helped me each mile! 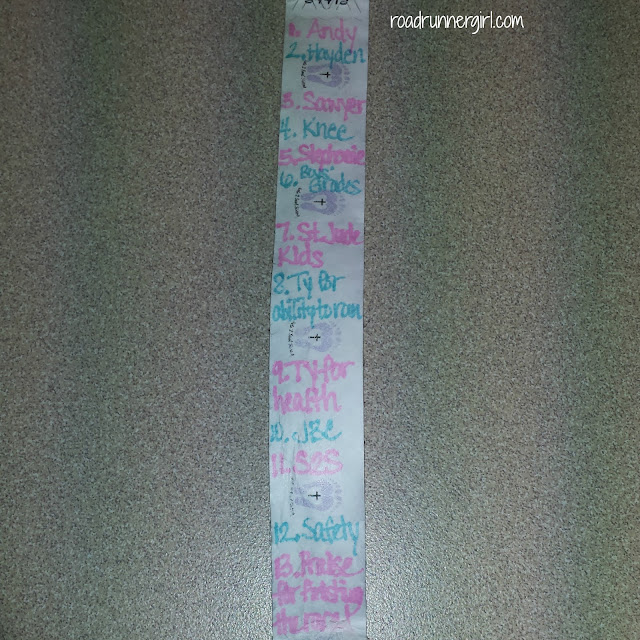 As for the knee and hip...they did great! I may have felt a little soreness in the knee around mile 11 but it wasn't pain. And after the run...I didn't feel a thing! Yay!

I had done it! I had run for the kids of St. Jude! It may not have been in Memphis...but this race still meant so much to me! It was amazing to have the support of all my Sole2Soul Sisters!

QOTD: Have you ever had one of your races cancelled?