In case you missed my other Memphis posts:

After touring the hospital we were all starving and ready for lunch! The tour bus took us back to downtown and we went inside the convention center to decide on where to eat. We decided on pizza and hopped on the trolley and headed to a place called Aldo's Pizza Pies. We probably could have walked there but you know how they were predicting an ice storm? Well yeah...it had started. It was raining ice for sure! 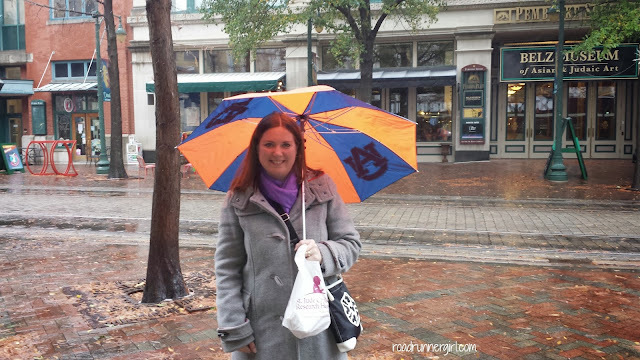 To this Gulf Coast girl...it looked almost like snow! 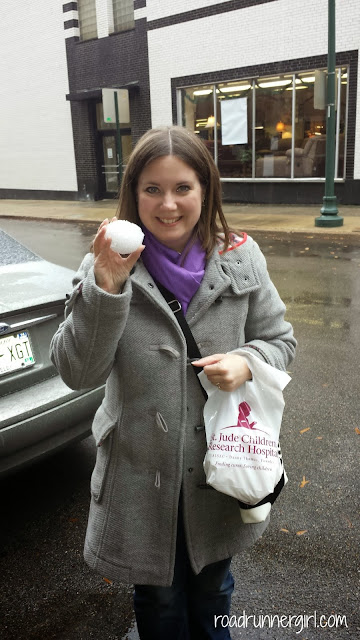 I was happy to be inside the restaurant where it was warm. The menu there was amazing! They had all sorts of specialty pizzas. But I'm pretty picky so I stuck to pepperoni. I didn't want to eat anything that might upset my tummy before race day. I just ordered my pizza by the slice...and I ordered two slices. Well...the server didn't tell me that the slices were HUGE! One slice would have been enough! I ate a bite of the second slice and just couldn't finish it. It was delicious though! The picture doesn't show how big these slices really were! 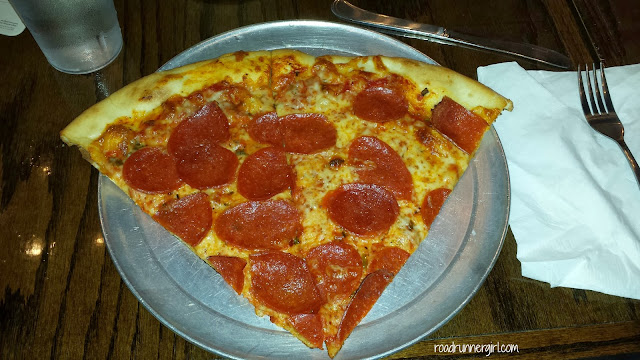 My Sole2Soul Sisters at lunch! Love these ladies! 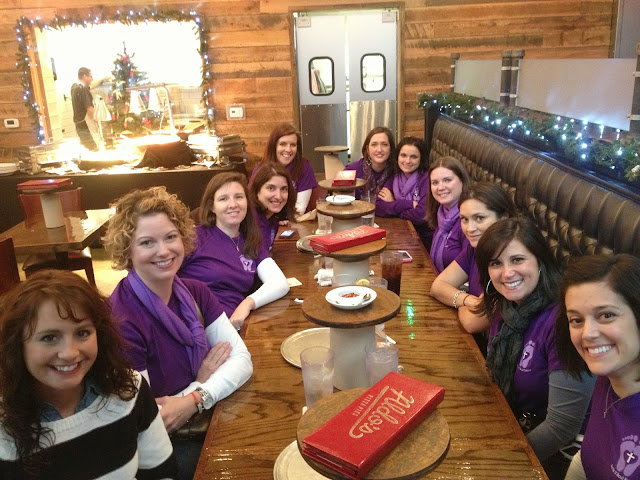 After lunch some of us split ways. Several of us went back to the expo (including me)! We took a few more pictures! 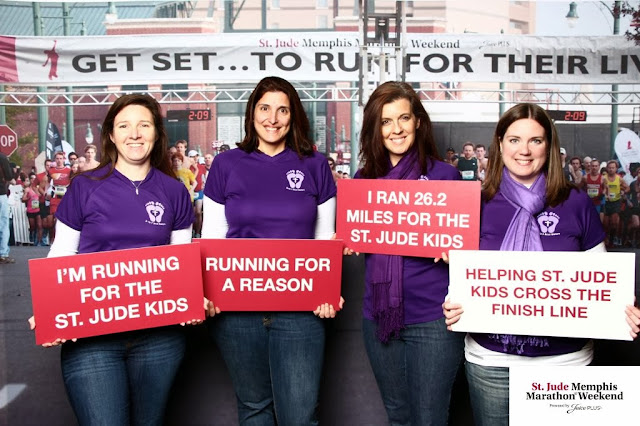 We also signed the wall for the kids at St. Jude! 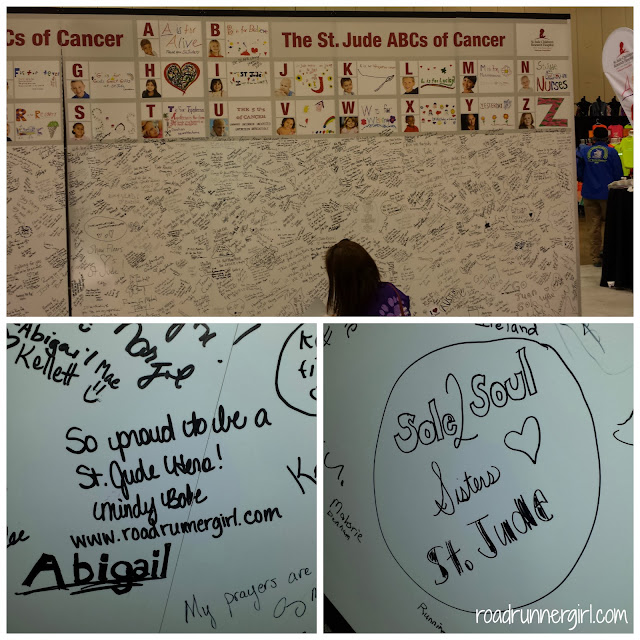 I did more shopping than I did the day before. The vendors were putting things on sale. I bought two pairs of Swiftwick socks and got one for free! And I found the new flavor of Huma Gel...Mangoes!!! 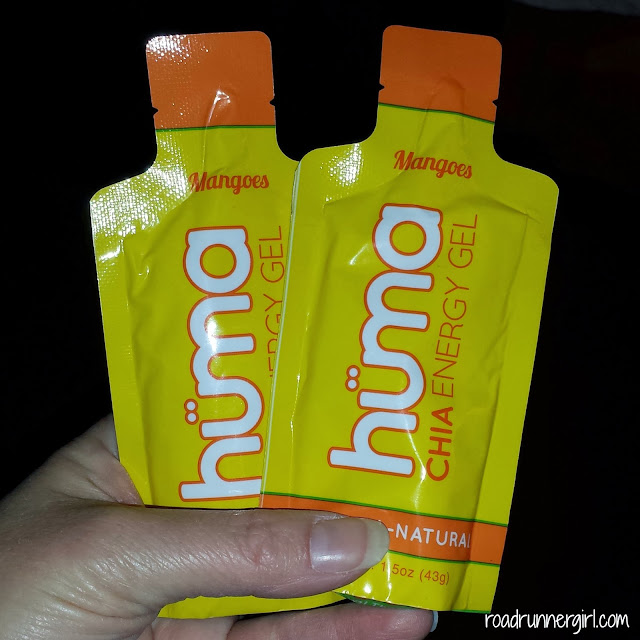 After the expo we headed back to the hotel to rest before the pasta party. We watched the news about the ice storm and to see if there had been any changes concerning the race. So far...the news said the race was still on. So we started getting our race outfits and warm layers together and making our prayer bracelets. 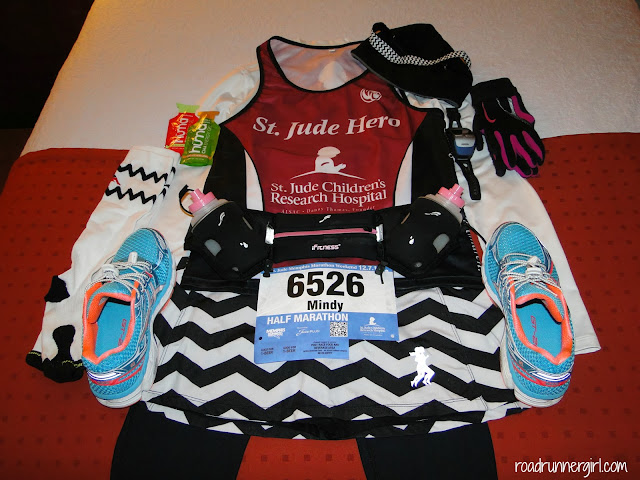 It was finally time to head to the St. Jude Heroes Pasta Party. Only 4 of us were attending...the rest of our group ate somewhere else. But I do not regret attending the pasta party at all! It was amazing!

When we arrived at the convention center (where the pasta party was being held) we could hear cowbells and clapping and cheering. We soon saw what the noise was about...it was all the St. Jude volunteers and they were clapping and cheering for us! They were lined up on each side of us as we walked into the party. They kept cheering and telling us thank you for being St. Jude Heroes! I lost it! The tears could not be contained. It was so emotional!

We then walked into this huge room with tons of candle lit tables. They were showing a slideshow of pictures from St. Jude. We watched as we lined up to get our food. 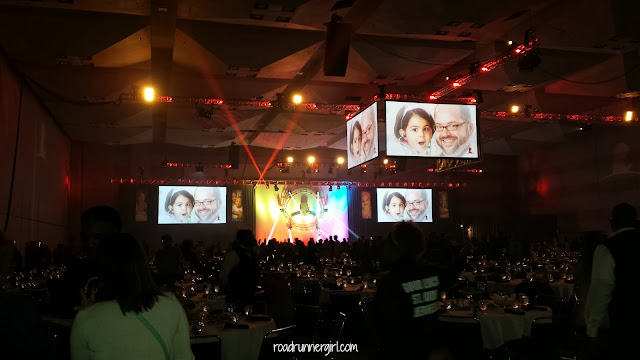 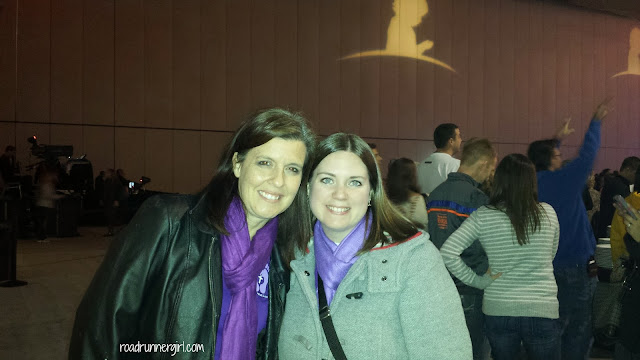 They had several tables set up with the food. It was very organized and they had the lines evenly distributed at each table. Each table had the same food so you only needed to go through one table line. 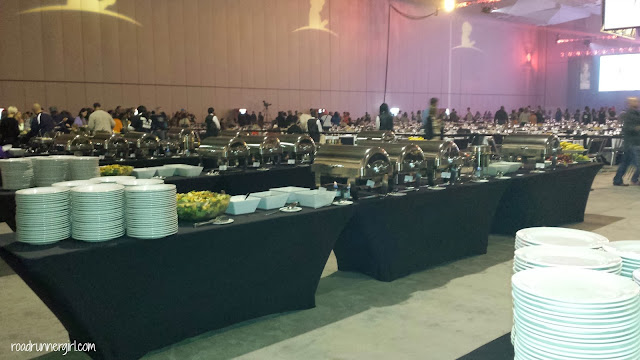 The table you chose to sit at already had your water, bread, silverware, cookies for dessert, pretzels, and a St. Jude notepad. 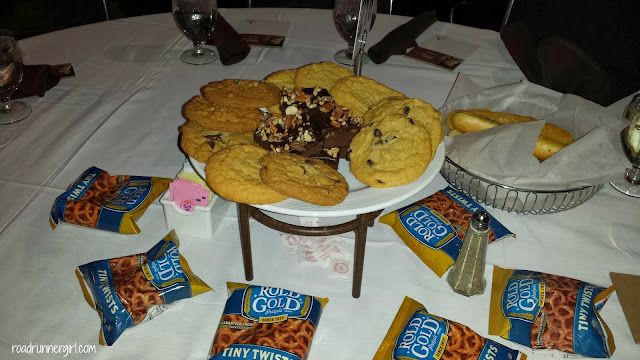 The food was good! I was impressed that they also had a gluten free pasta option too! 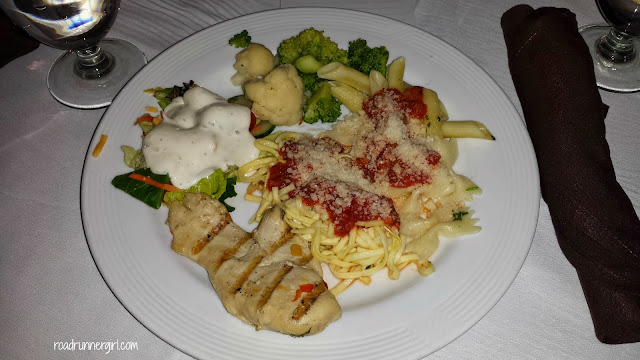 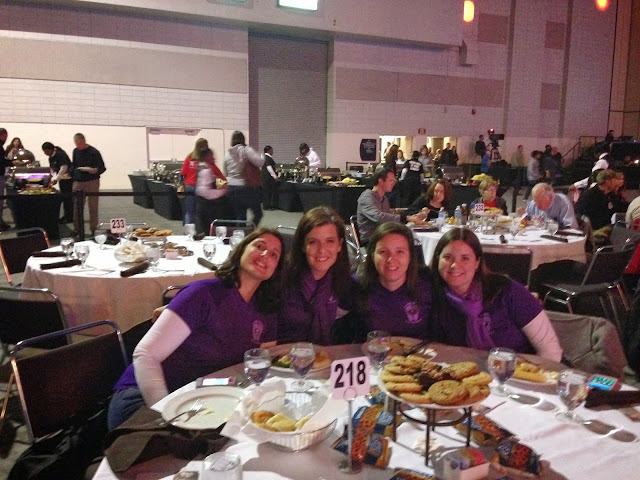 As we ate we watched the screens. They were scrolling through everyone's tweets and pictures from the weekend! I was surprised to see all of mine on the big screens! They also told us the top 10 reasons to attend the St. Jude Heroes Pasta Party. I LOVED the number 1 reason! 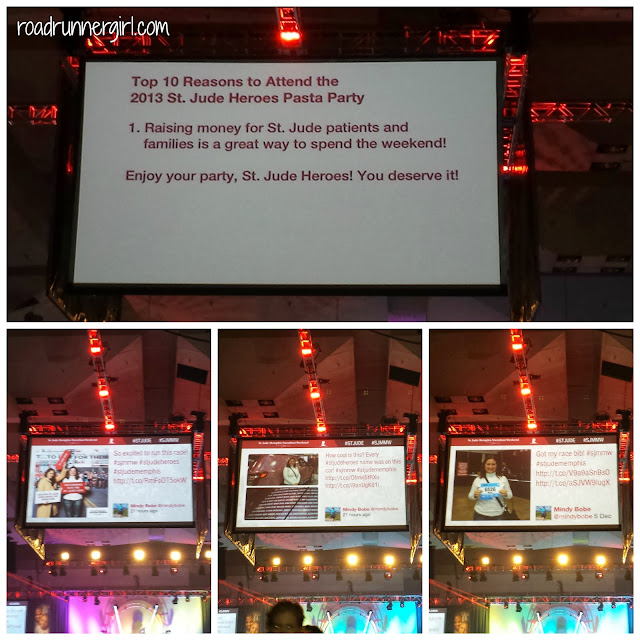 We had just finished eating when we started getting texts from our friends who weren't at the pasta party asking us if the race had been canceled. They had heard that it had. I was confused and told them that no one had said that at the pasta party. So I pulled up the race website....and there it was. The race had been canceled. We were all in shock.

A few seconds later the CEO of ALSAC/St. Jude got on stage and said, "So guys we have to have a conversation. Ok? So I have to give you some news that is unfortunate. And I hope and pray that you all will hear me out...as I tell you that we can't go forward tomorrow." He then went on to explain all the reasons that aided in his decision to cancel the race. It wasn't the roads per say but the sidewalks were icy and that is dangerous for the spectators. The course itself had a tree down and low hanging limbs that were covered in ice and hanging over the course. The finish line area was literally a skating rink. 30% of the volunteers were forced to cancel as well as 15% of the medical personnel due to the ice storm. And the city of Memphis was under a state of emergency. There were about 8500 citizens that were without power. And he didn't think it was right to distract the police force from responding to those citizens that were in need due to the weather. He said decisions like this had to be based upon safety first.

I totally understood and agreed with his decision. But of course I was still very disappointed. I had worked so hard to overcome my injury to get to this race. And I was sad for my friends who this was their first half and first full marathon. 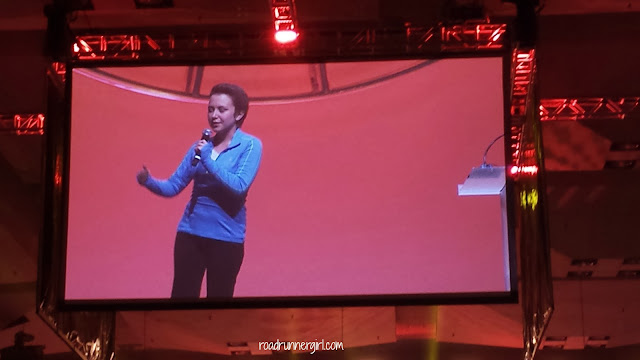 After that we were told that we, the St. Jude Heroes, had raised a total of $8.2 million dollars that weekend! That is what this was all about! Helping those children who are battling this awful disease. The race may have been canceled but I didn't regret one moment of my time in Memphis and my time spent fundraising. 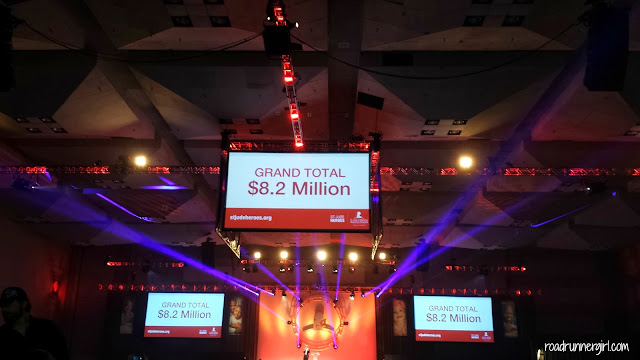 I also got to see my friend Stephani from Illinois. I was sad that her group had risked the weather and drove into Memphis...and hours later the race got canceled. 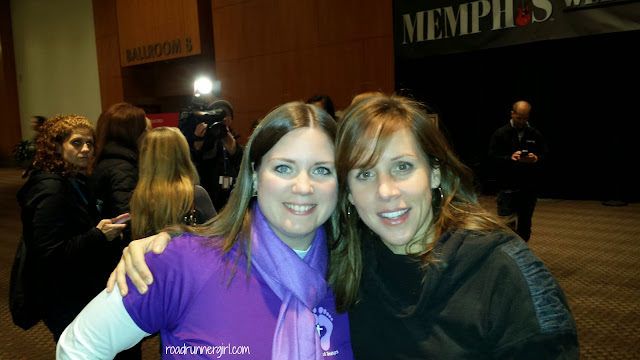 Same story for some other friends that had driven from Texas...and then the race was canceled. 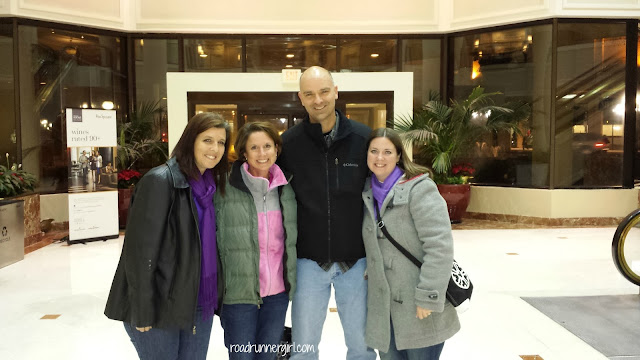 After visiting with friends for a little while we headed back towards our hotel. I tried to take a picture of all the ice on the trees but it was hard to see in the dark. 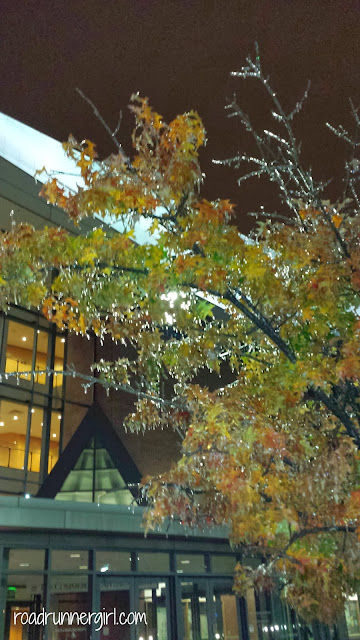 My pasta party friends went to their hotel and I met my roomies and we headed to Beale Street. We couldn't leave Memphis without hearing some jazz! Everyone told us to go to BB Kings so that's where we ended up. 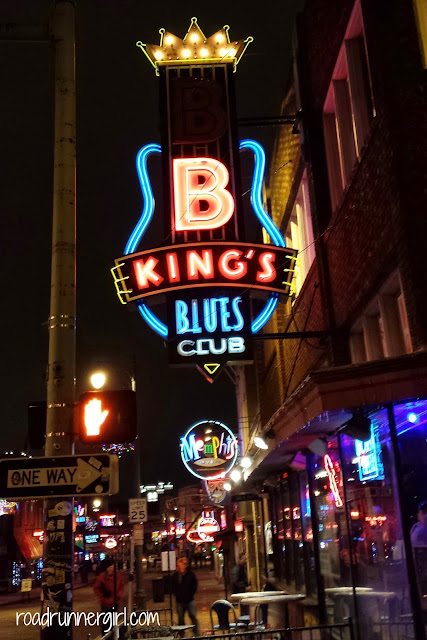 We didn't stay out too late because we were all just emotionally exhausted from the day. We decided to go ahead and leave the next day (a day early) since the race had been canceled. The St. Jude Marathon people invited all the St. Jude Heroes to attend the VIP Lounge (which was supposed to only be for top fundraising people) the next day. So we went to that before we left Memphis. But this post is super long so I'll save that for next time!

QOTD: Have you ever fundraised for a race?