Be sure to read all about packet pickup and my day in Mandeville!

I slept really well the night before this race. I usually don't sleep well so I was really thankful! When the alarm went off at 4:45 AM I was ready to wake up! It's always fun getting ready for a race with friends. Everyone was in good spirits!

We left our hotel and stopped to meet some of our sisters so they could follow us to the race. It was quite chilly at this time. The temperature was in the mid 50's. I knew it would be perfect for running! 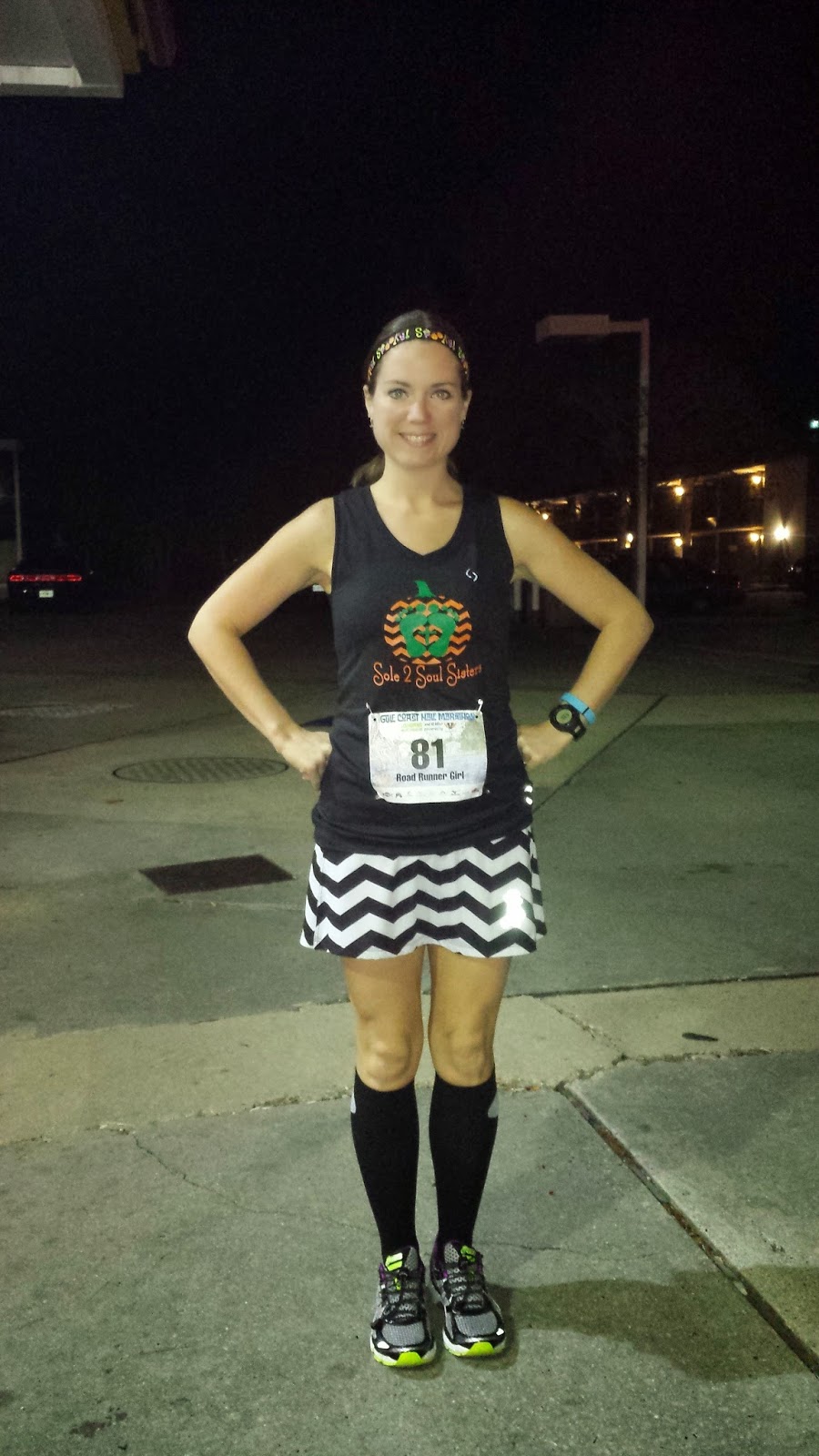 We met our friends and then we were on our way. This race starts in Fontainebleau State Park. There is only one entrance so traffic can get very backed up. One year we barely made it to the start line on time because of the traffic. So each year since we are sure to leave in plenty of time in case we get caught in traffic. This year there was a little traffic but it moved very quickly. We found our parking spot (which was pretty close to the finish line..yay) and then headed to the port a potties lol!

Since we were there fairly early the line was pretty short. It was still totally dark outside but the race area was well lit up thankfully. We found all our other Sole2Soul Sisters and took our group picture. There was a ton of us! 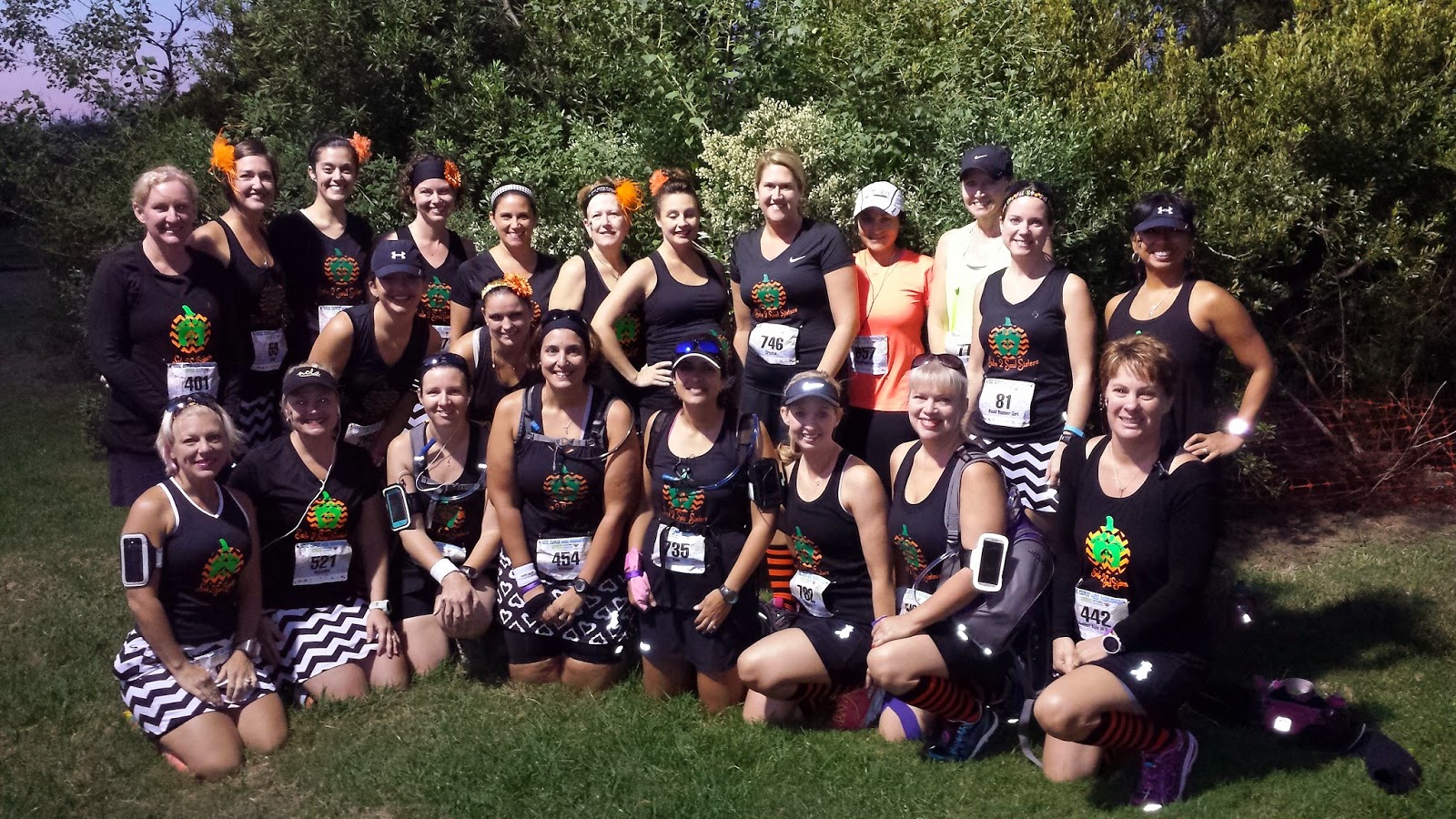 And of course we had a silly picture too! 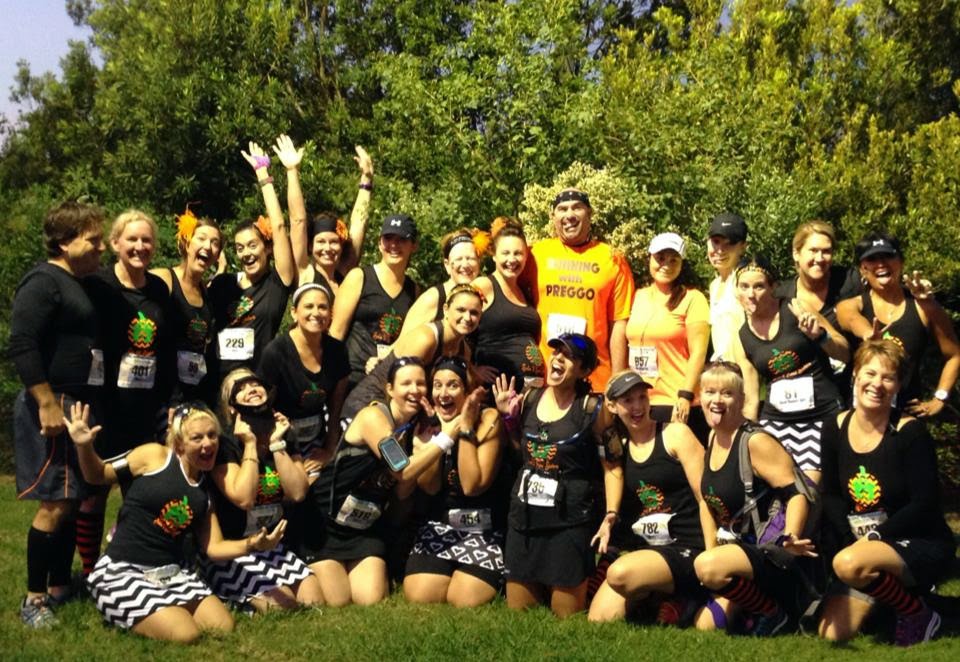 My friend Katrina who moved to Auburn this past summer also came to this race! I last saw her in Talladega but it was so good to see her again! 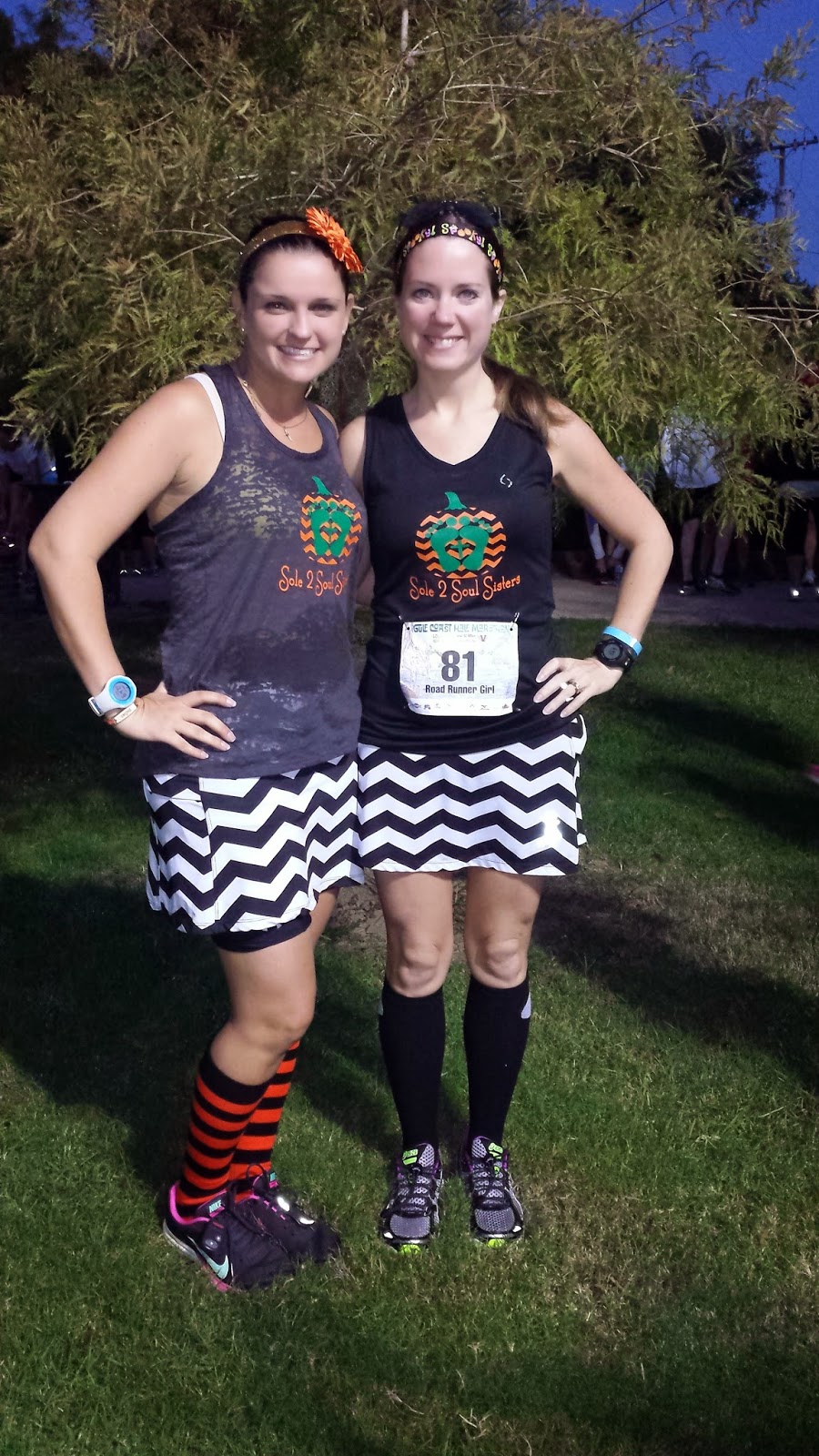 Before long it was 7:00 and time to start! There aren't corrals for this race. You basically start in suggested pace areas. All my sisters were in the back. I told them we should move forward but they didn't want to. I didn't worry too much about it because I knew it really didn't matter when I crossed the start line since I had a timing chip.

I didn't think sub 2 would happen. I wasn't even sure I would be able to beat my previous PR since I felt so amazing that race. But I knew I should be able to come in under 2:10. I told myself I was going to just run the way my body felt. And that's what I did.

The first 2-3 miles I had to weave in and out of people. That was a disadvantage of starting in the back. We weren't even a half a mile in and people were already starting to walk which was frustrating because several just stopped right in front of me.

Mile 1 was in the state park. Then we turned onto the highway at mile 2. Mile 3 we turned into a neighborhood. That is one thing about Mandeville. There are some gorgeous homes there and along the race course!

When we reached mile 4 the crowd was starting to thin out some. I was no longer having to weave and I was in my groove. Then came my favorite part of this course at mile 5...running beside Lake Pontchartrain! It is always gorgeous by the water and the homes are beautiful!

I quickly snapped this picture but didn't know how it was going to turn out since I wasn't going to stop running! I think it came out pretty good! 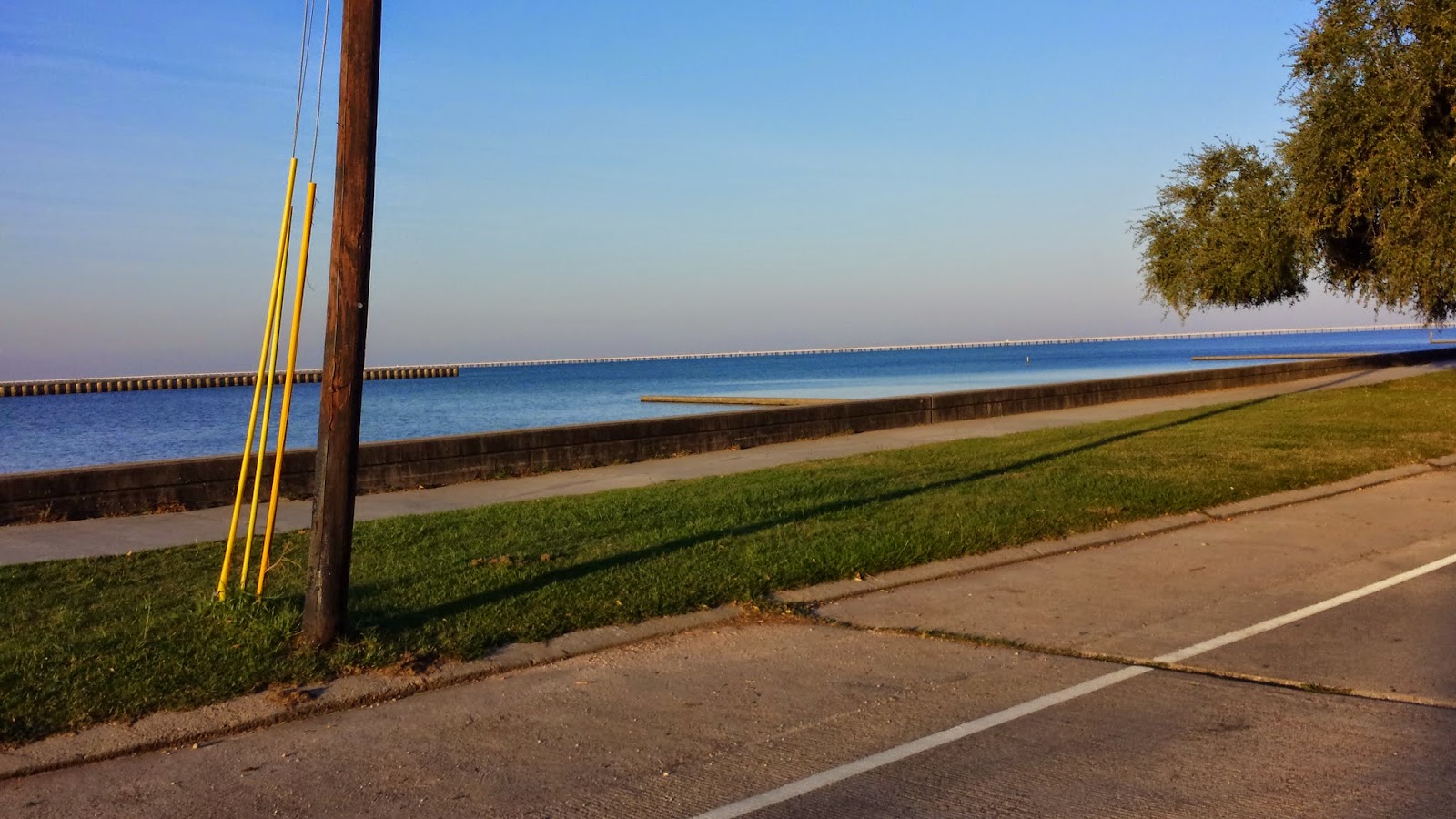 Around mile 6 we turned into another neighborhood. I remembered this part of the course was where you went into the neighborhood, came out onto a main road, turned around, and then reentered the neighborhood. I was hoping I would see some of my sisters on the opposite side but I only saw 2...Gina and Cindy.

Finally I made it out of the neighborhood maze and I was at mile 7. I knew we would be passing by Varsity Sports where we picked up our packet around mile 8.5. They do a water stop and it's always really fun. Sure enough...they were all dressed up like superheroes! So fun! I grabbed a quick cup of water. I had been alternating water and Gatorade at every other water stop. That is one thing this race never lacks...water stops! There are plenty of them!

Around mile 9.5 we turned onto the bike path that would lead us back into the state park. This part of the race in the past has always been very mental for me. I usually end up walking some. But not this time. I kept on going. I reached mile 10 and looked down at my Garmin. I knew then that I had a shot to finish in under 2 hours. But it would be close. I started praying. I really really wanted that sub 2. Was this my day?

I thought about how proud Andy would be and how proud my friends would be. I wanted it. I could taste it. I kept telling myself to fight for it. Because yes....I was getting tired. But I knew I could do it. I just had to fight!

Mile 11 came and then we turned off the bike path and entered the state park about mile 11.5. I was so close! I reached mile 12 and looked at my Garmin. That's when I knew I was going to do it. I just couldn't stop. I had to keep going. I couldn't slow down.

There is a curve in the road and then a straight shot to the finish line. I was looking for that curve. I got close and could hear the race director, Mike, calling out the names of the people finishing. I reached the curve, I turned, and I could see the finish line.

I remember seeing a spectator on the right side of the road. He yelled at me that I was almost there, to keep pushing, to pick it up because I only had about a minute to come in under 2. I thought to myself that he must have been a runner because he knew the exact words to say to make me speed up!

And there it was....my finish line! And the clock had a time under 2 hours! I remember Mike saying, "Here's one of our friends, Mindy Bobe from Alabama...Road Runner Girl!" It was great hearing that as I crossed the line!

I got really emotional from that point. I was crying as they handed me my medal. I couldn't hold back the tears. But no one was there to see it. All my friends were still out on the race course. I walked away from the finish line and noise so that I could call Andy. But he didn't answer. I HAD to call someone! I knew Paige was still running but I also knew she would answer. So I called her and tearfully told her I had done it! I had come in under 2 hours! Her scream of excitement was amazing! She said she was proud of me and she would see me soon. She was at mile 9. Then I called Andria (my friend that I've been training with and running all my long runs with who couldn't be there for this race). Andria told me she was going to run a half marathon up and down her street that morning starting at the same time my race started. I figured she would still be running but I hoped she would answer. She did! She was so happy for me! She was at mile 11.5 and told me she would text me when she was finished. She did and had run her 13.1 miles in 2:18! She did about 26 laps up and down her street to reach 13.1 miles...amazing!!!

I took a post race selfie with my race bling! And of course I had to get a picture of my Garmin! 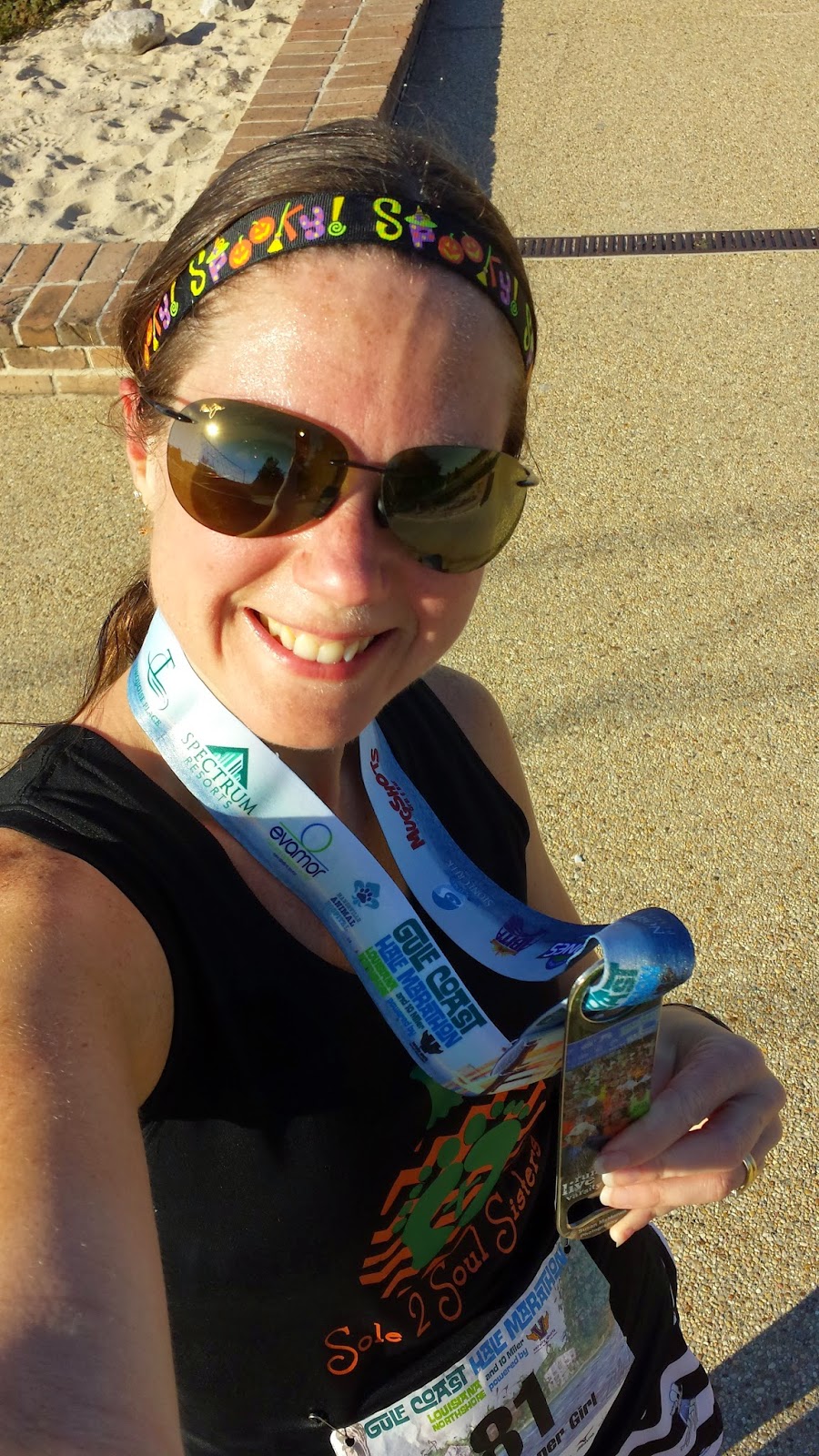 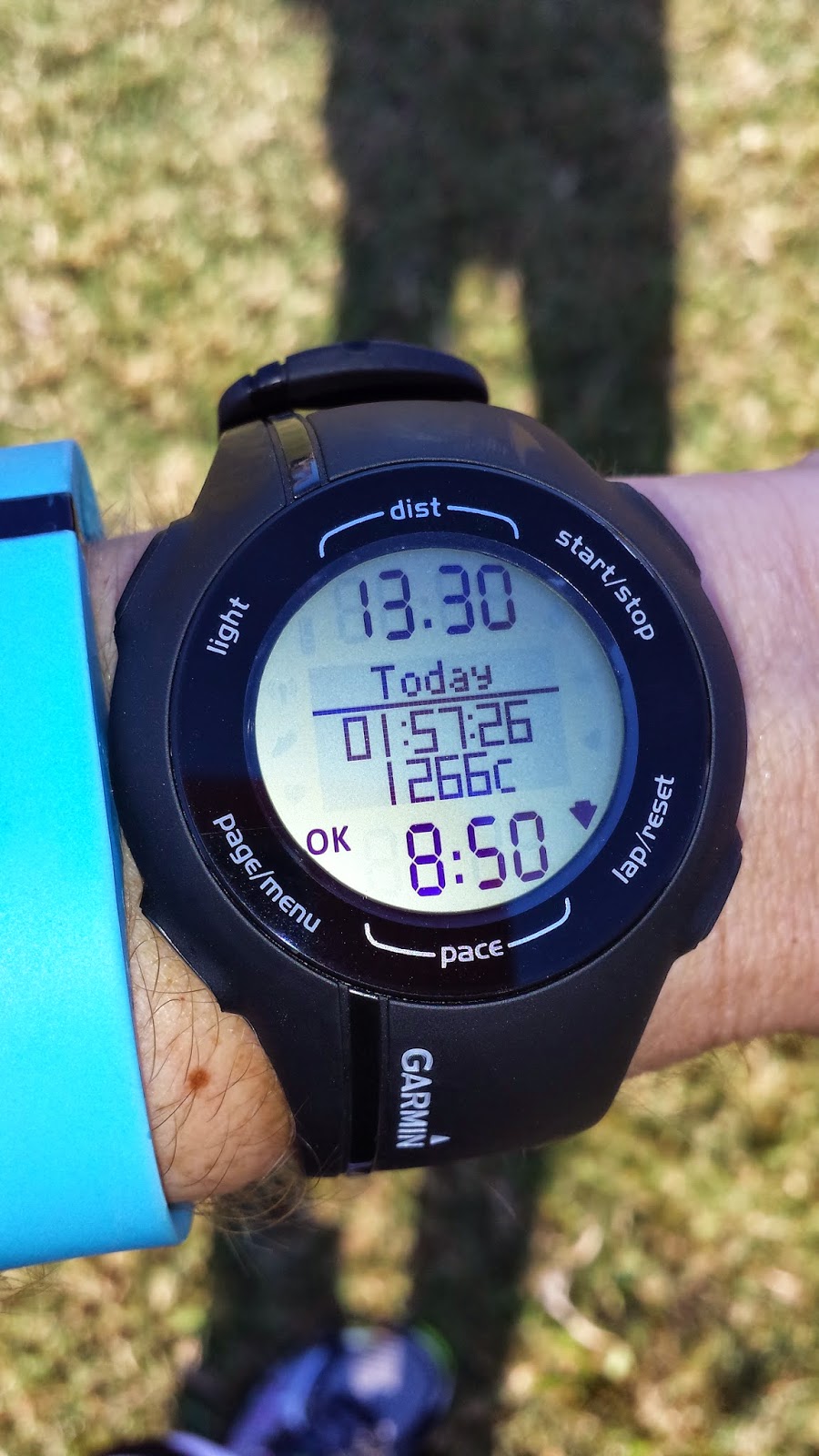 I grabbed an orange slice to refuel. I really wanted my lowfat chocolate milk but they didn't have any. And I had forgotten my cooler with mine in the hotel room.

I headed back towards the finish area and went to see the race director Mike. He gave me a hug and a huge fist bump for my PR! 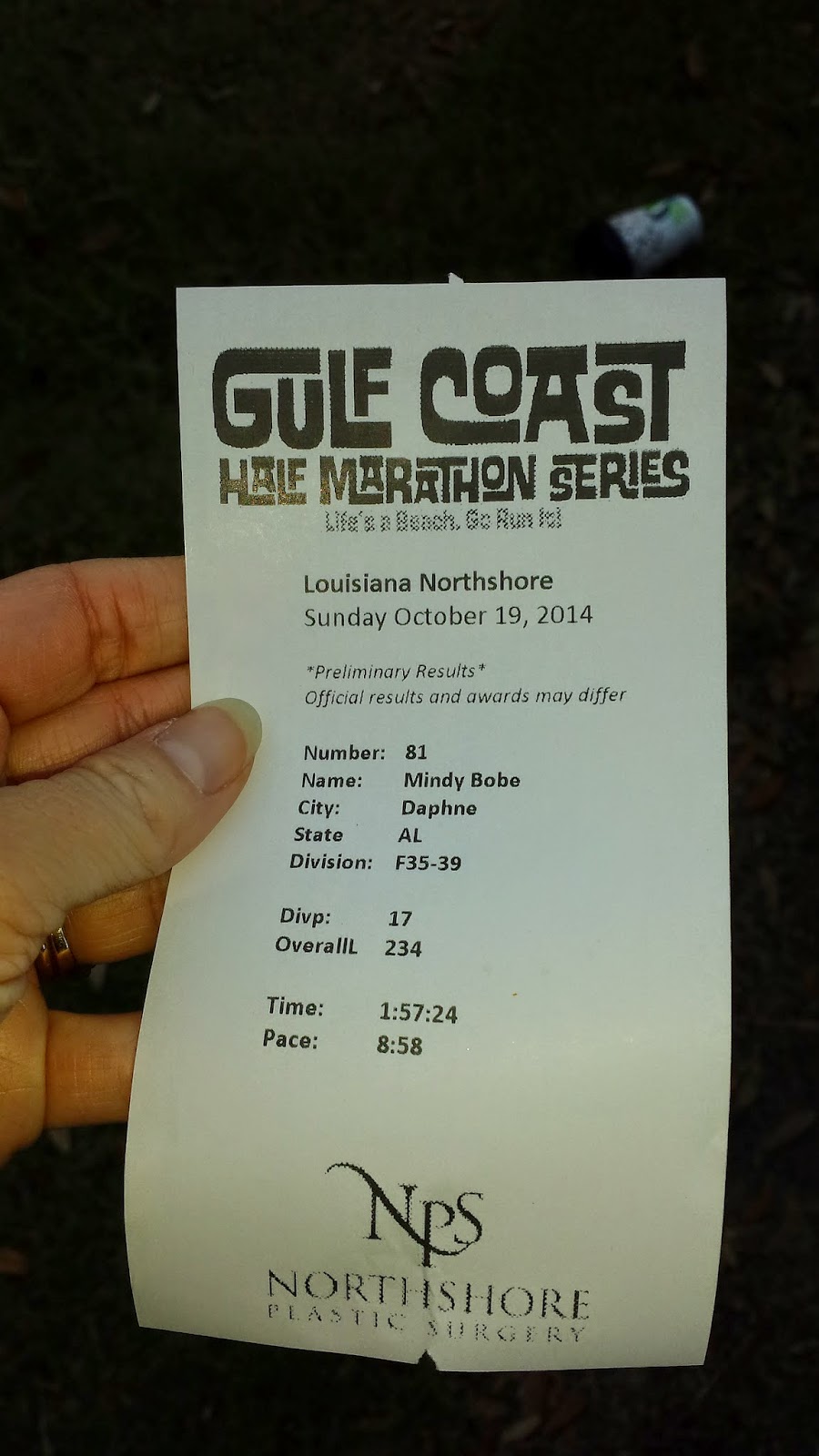 Not long after that Gina texted me that she was finished and I met her. She had PRed too with a time of 2:06!!! She took a picture of me with my bling while we waited on our friends to finish. 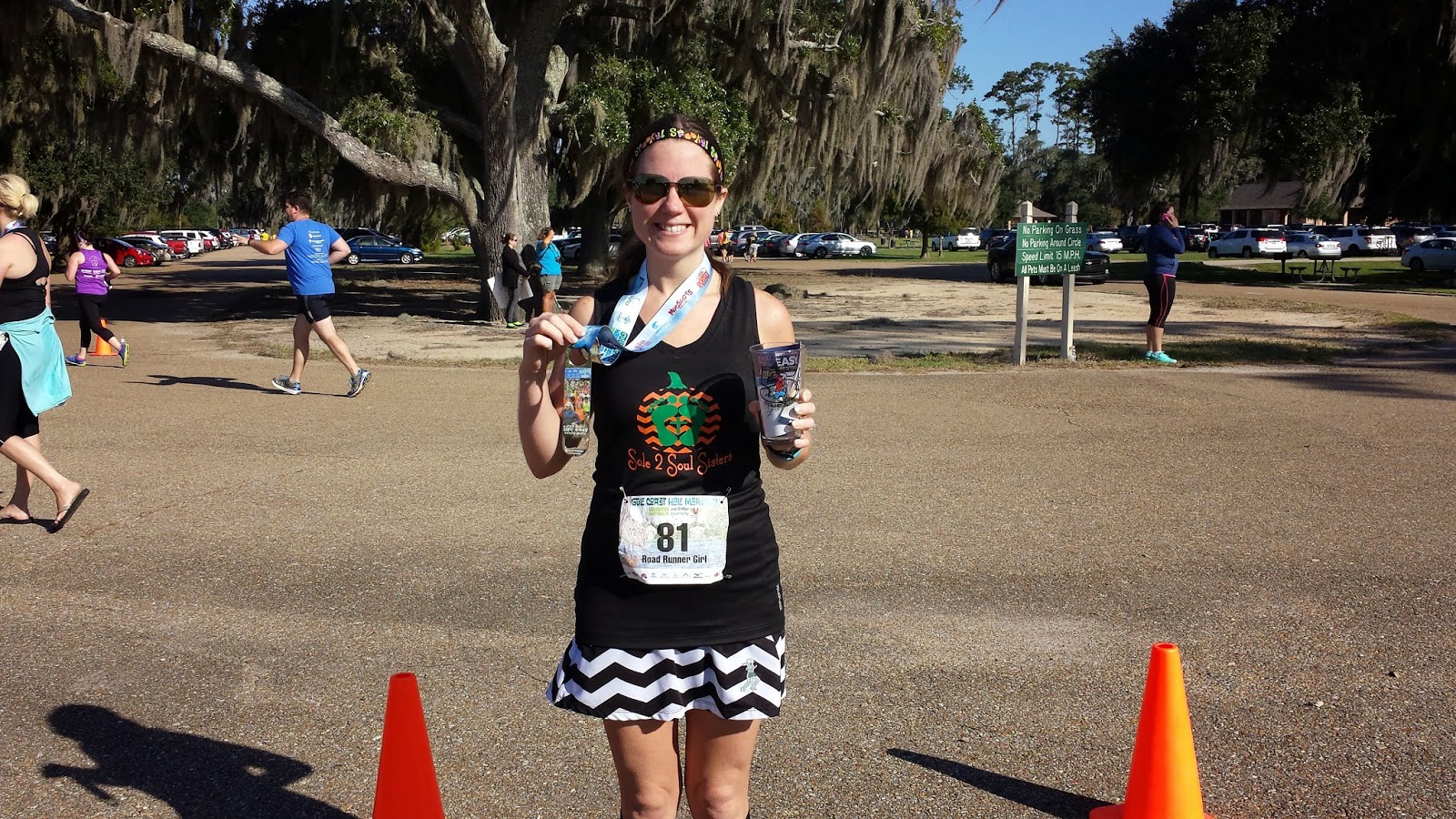 About an hour later our friends starting coming in. Several of them had run with Lacey...who was 8 months pregnant! It was so awesome seeing her and her hubby come into the finish surrounded by friends! 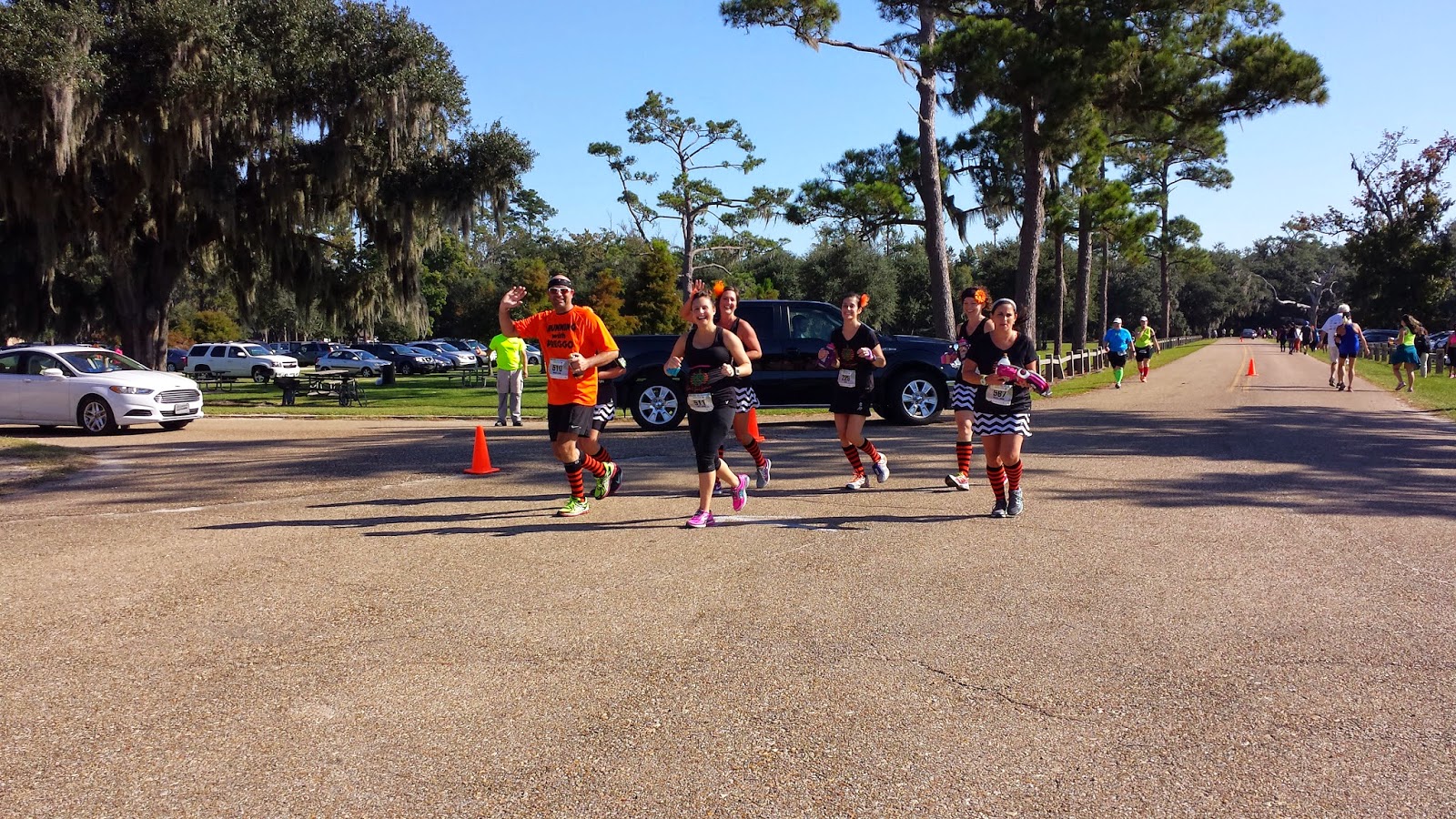 We all met up at the end for our finisher group picture (minus a few unfortunately). 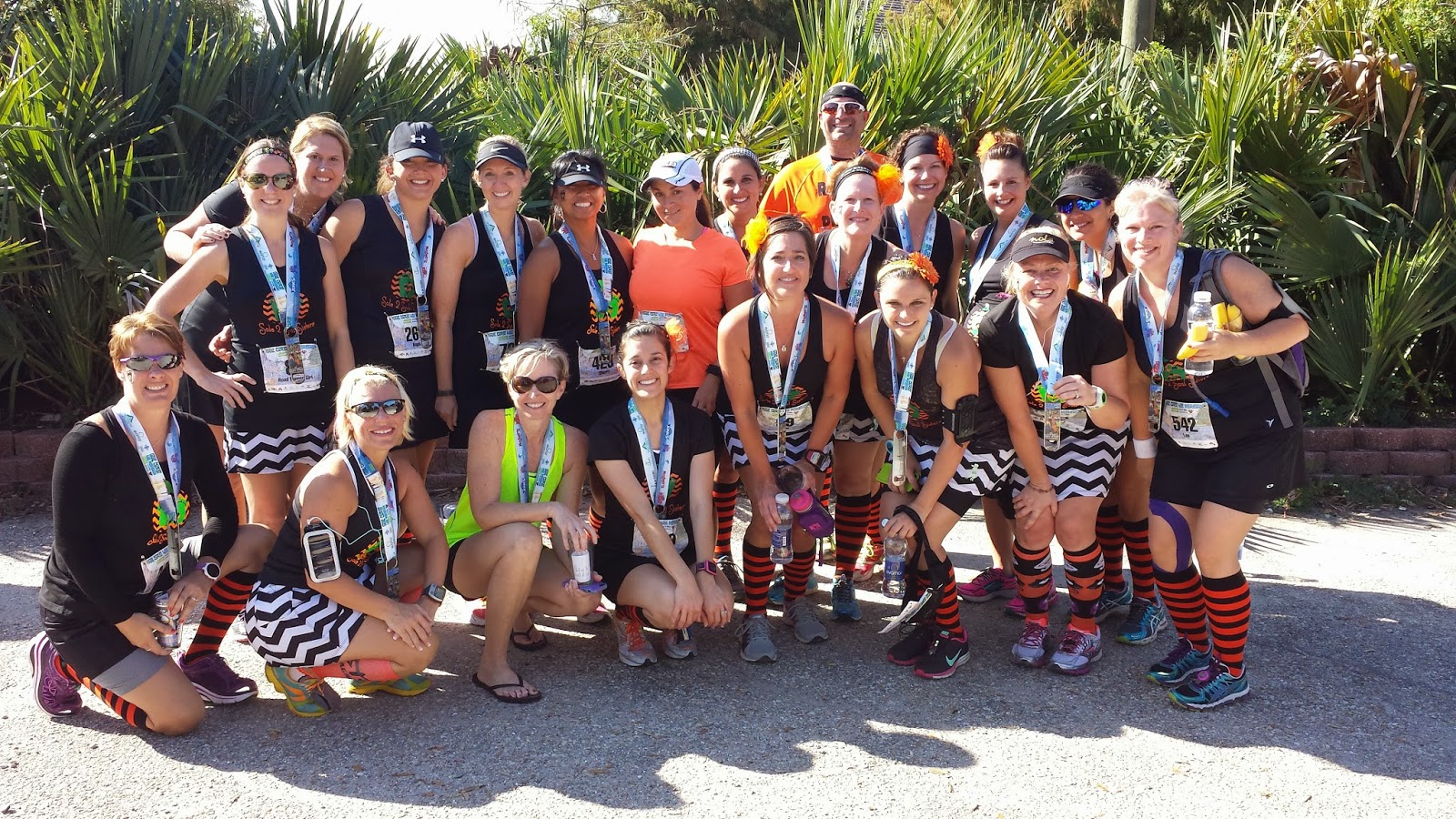 And I had to get a picture with the best roomies EVER!!! I had so much fun with Paige, Donna, and Susanne!!! 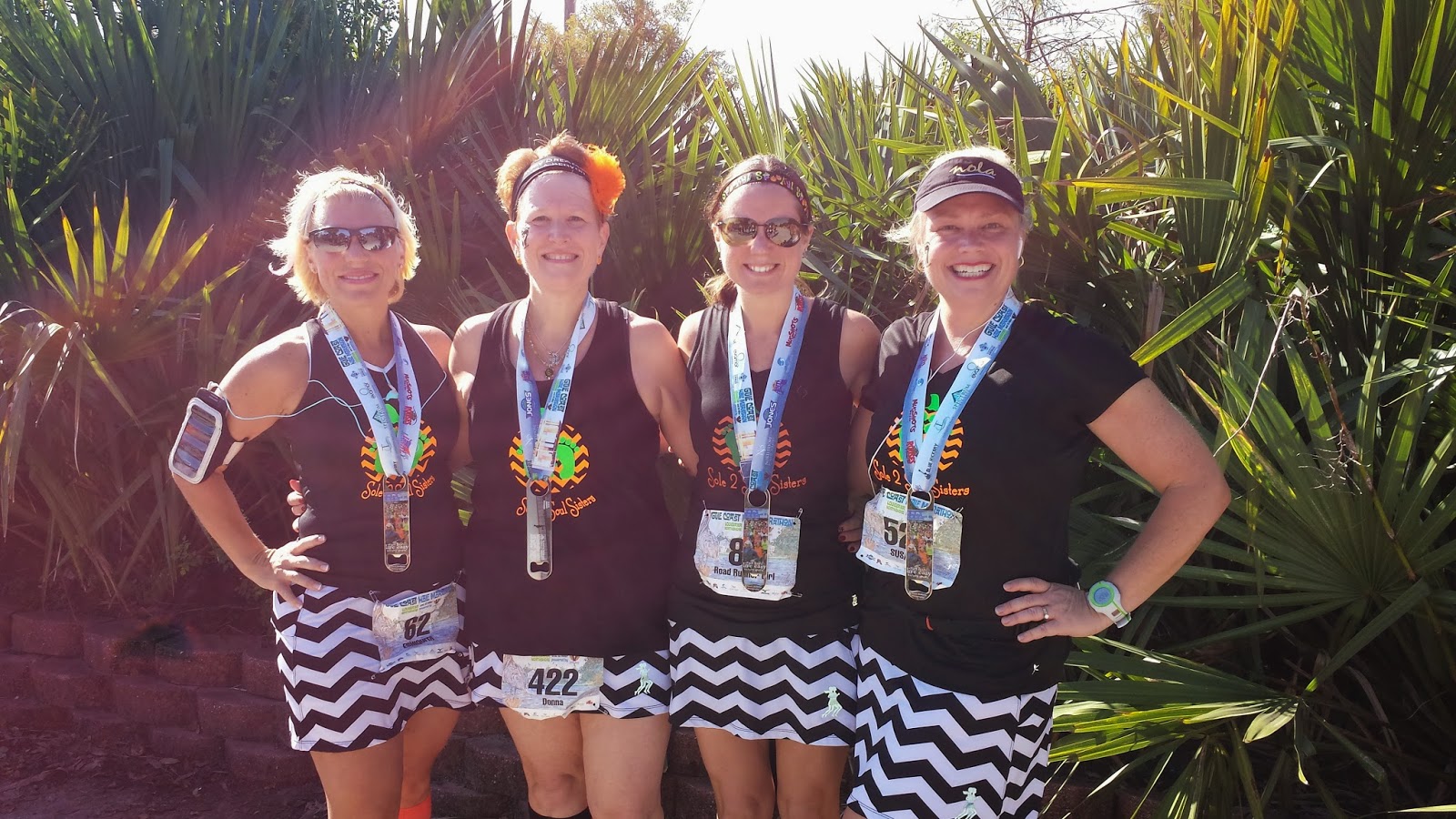 And one last finisher shot of the sub 2 girl!!! 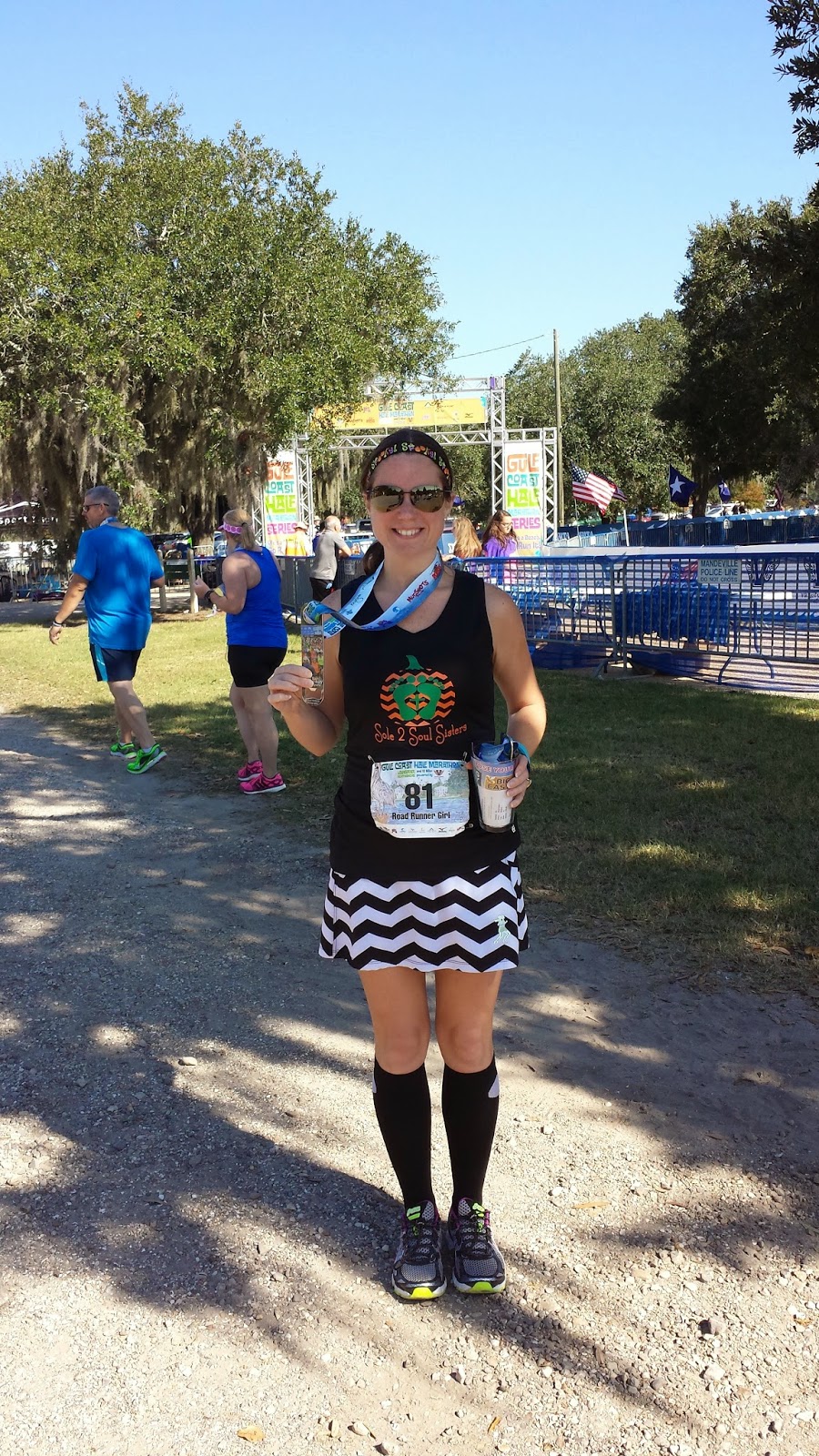 We said goodbye to most of our friends and then me, Paige, Donna, and Susanne all headed towards the post race party! They had music and several vendors there. They had someone cooking hamburgers and pasta salad. There was definitely enough food but I wasn't quite hungry yet. They also had free massages (you may remember I participated in this last year). And there was a place set up with foam rollers so you could roll out those sore muscles. We all took advantage of that! 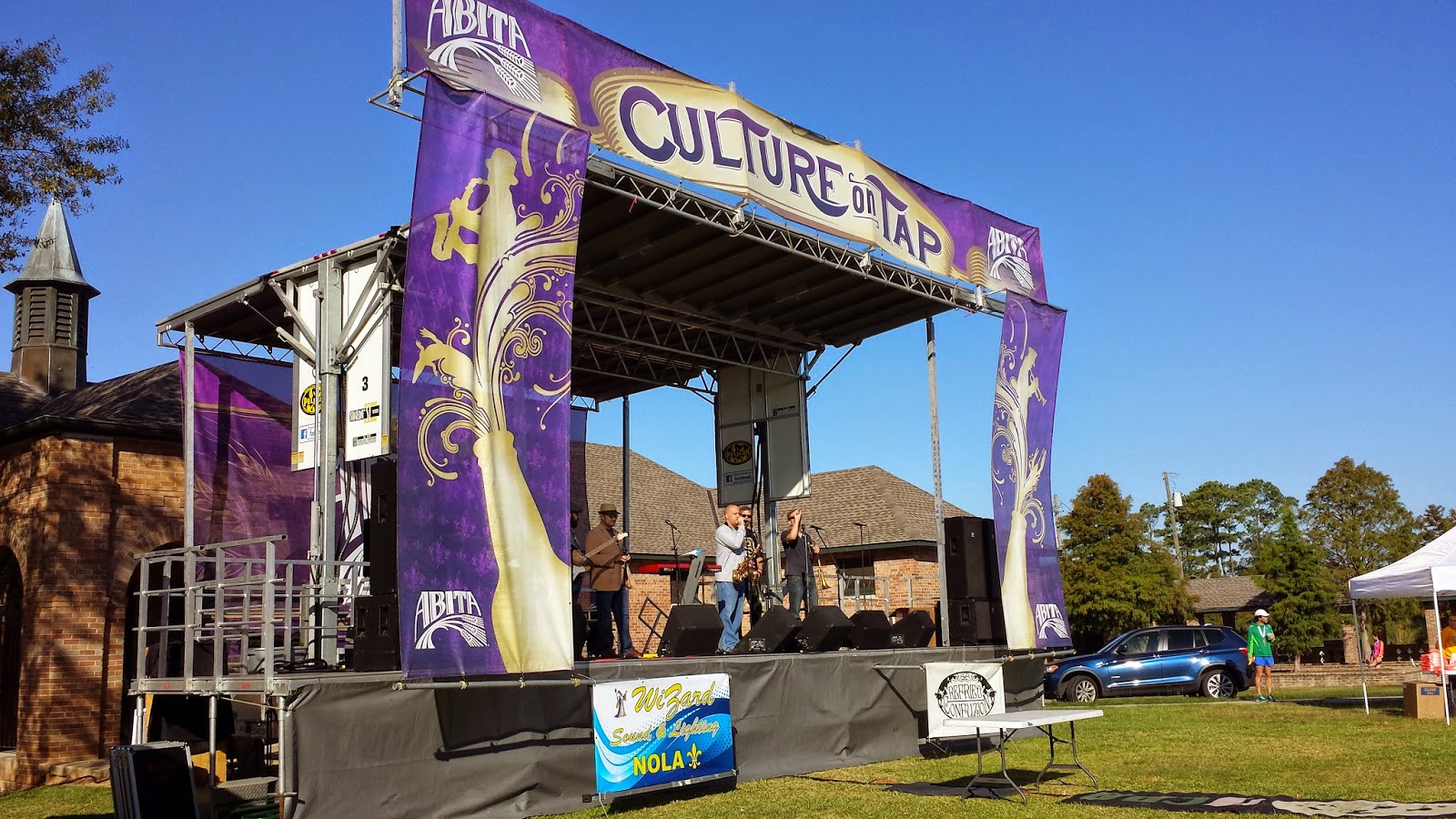 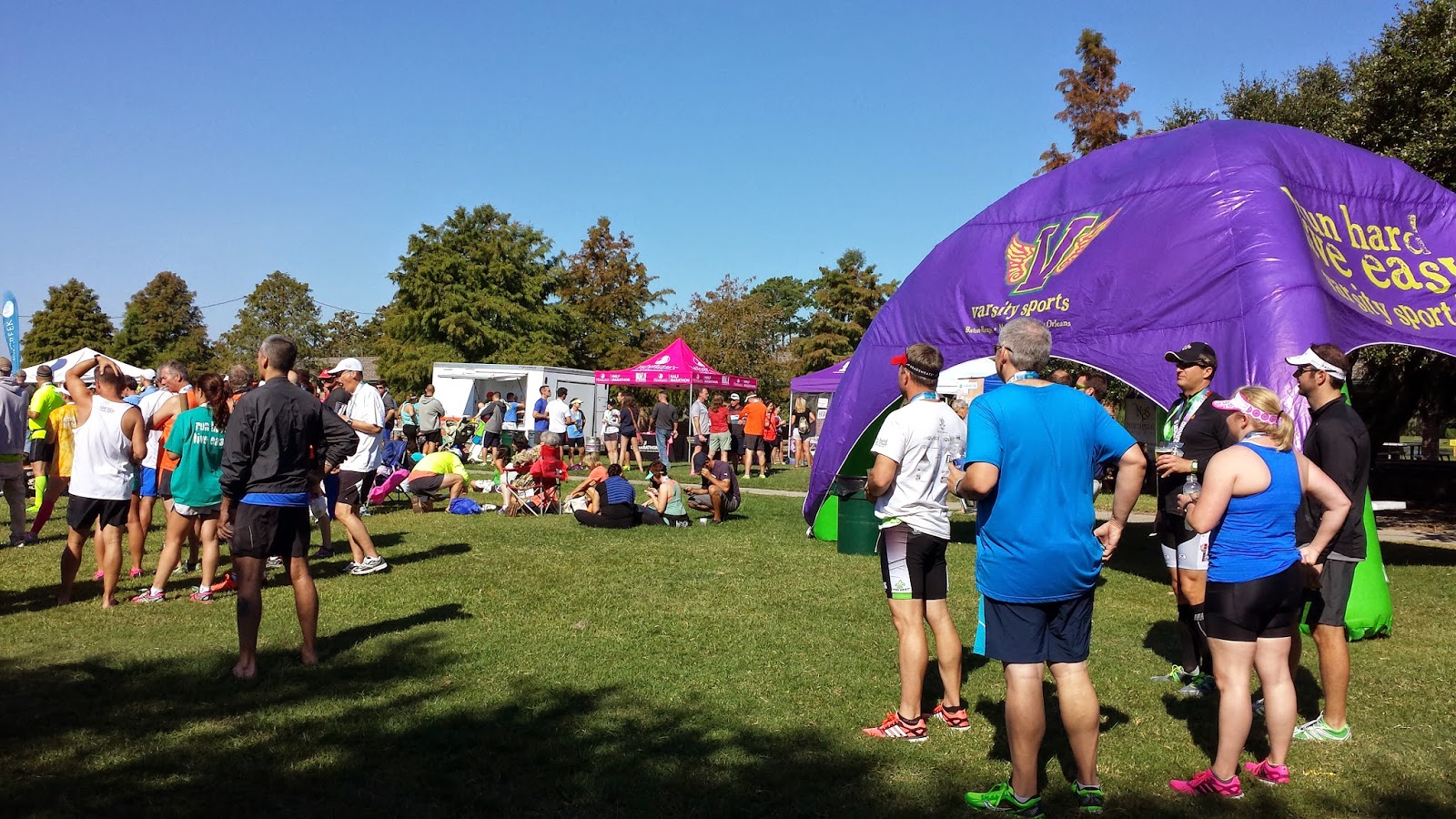 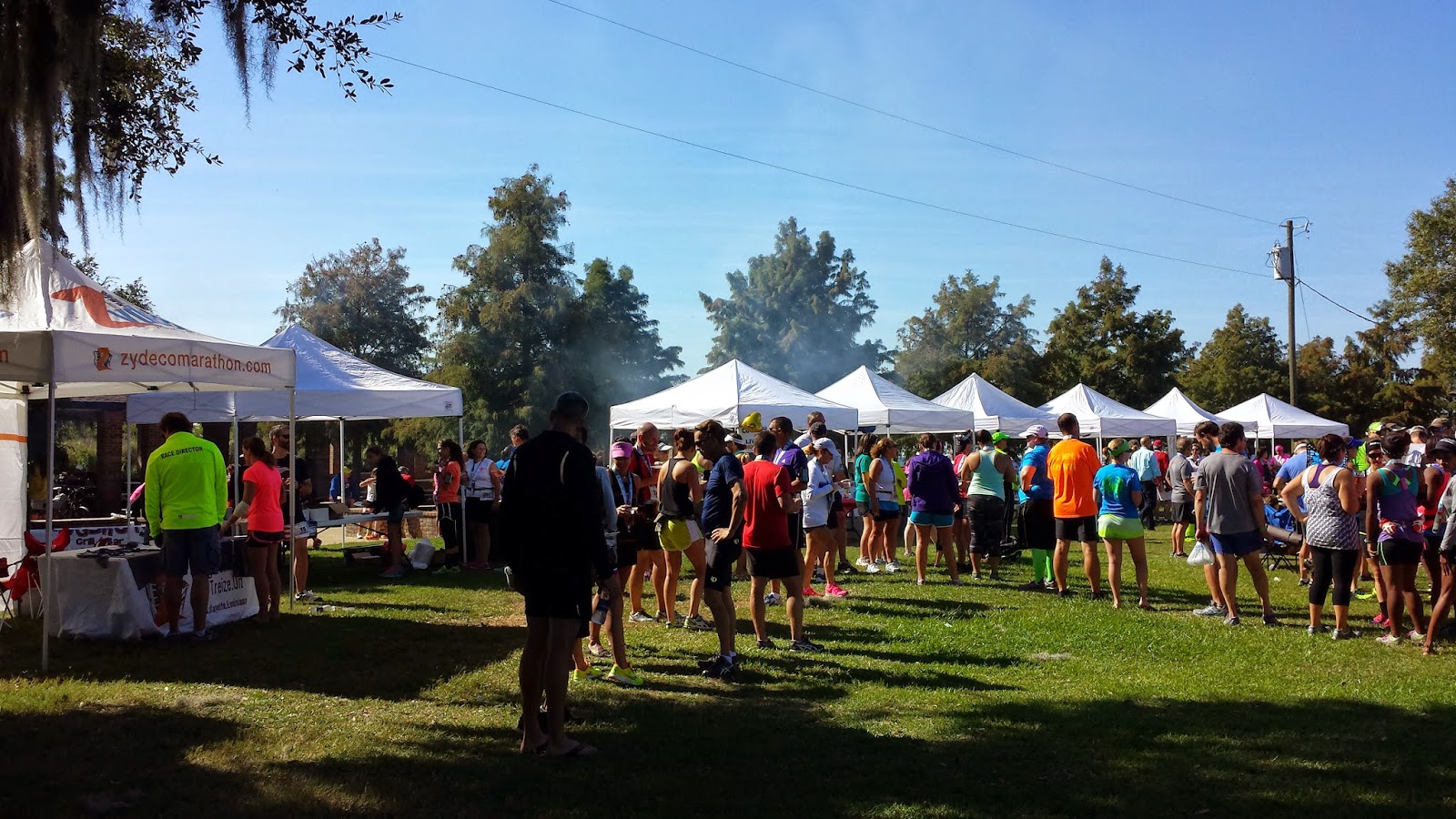 Then we headed to Paige's mom's house for a quick visit. Then back to the hotel for showers. That shower felt so good! And our hotel had free complimentary coffee that tasted amazing!

We checked out of the hotel and set out to find a place to eat. We were all starving by this point! We stopped at Zea's Rotisserie Grill. The hostess was kind enough to take a picture of all of us in our race shirts and medals! 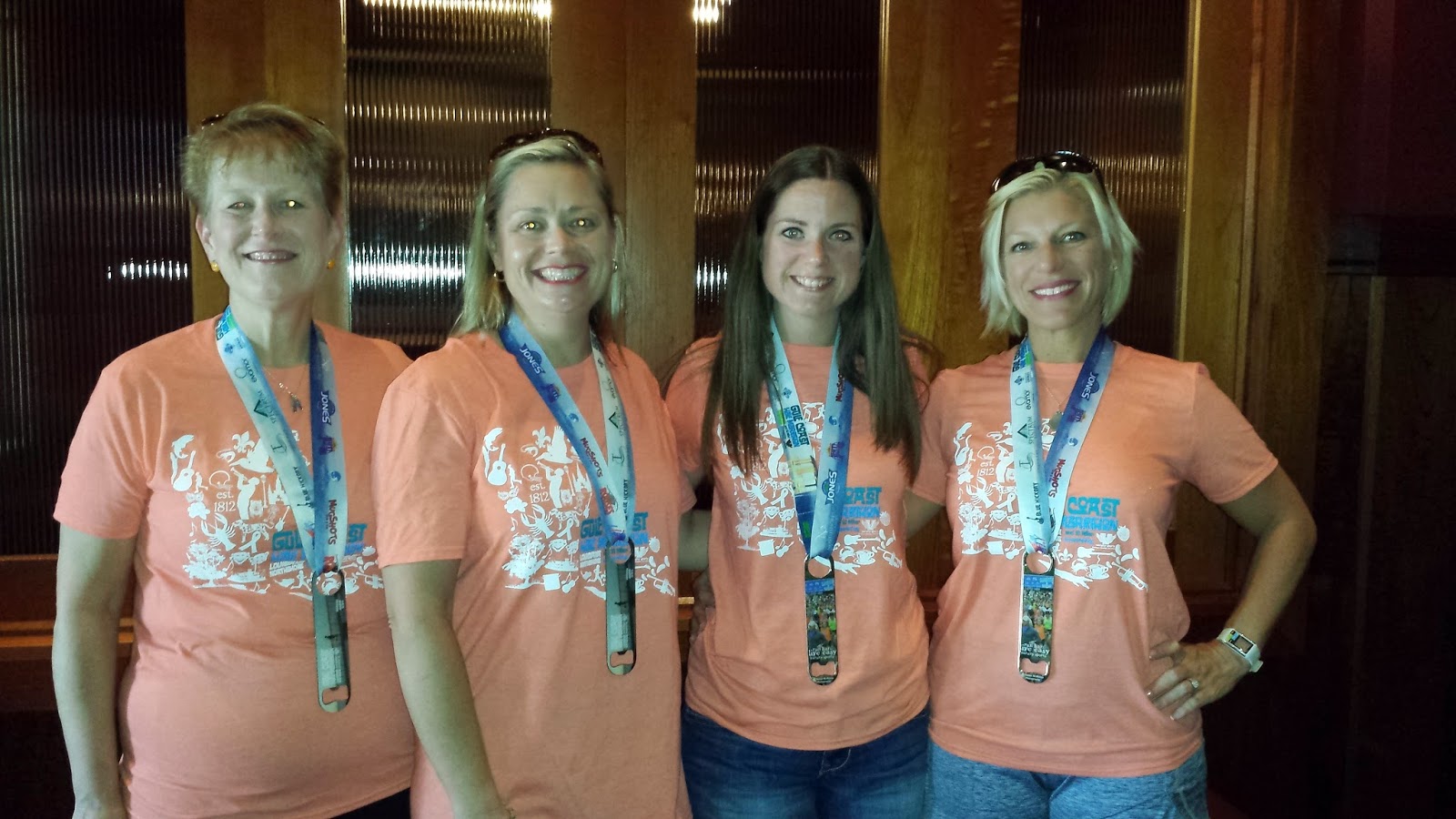 I think my body was craving protein and salt. I ordered the Kobe Beef Hamburger and french fries. It was amazing!!! 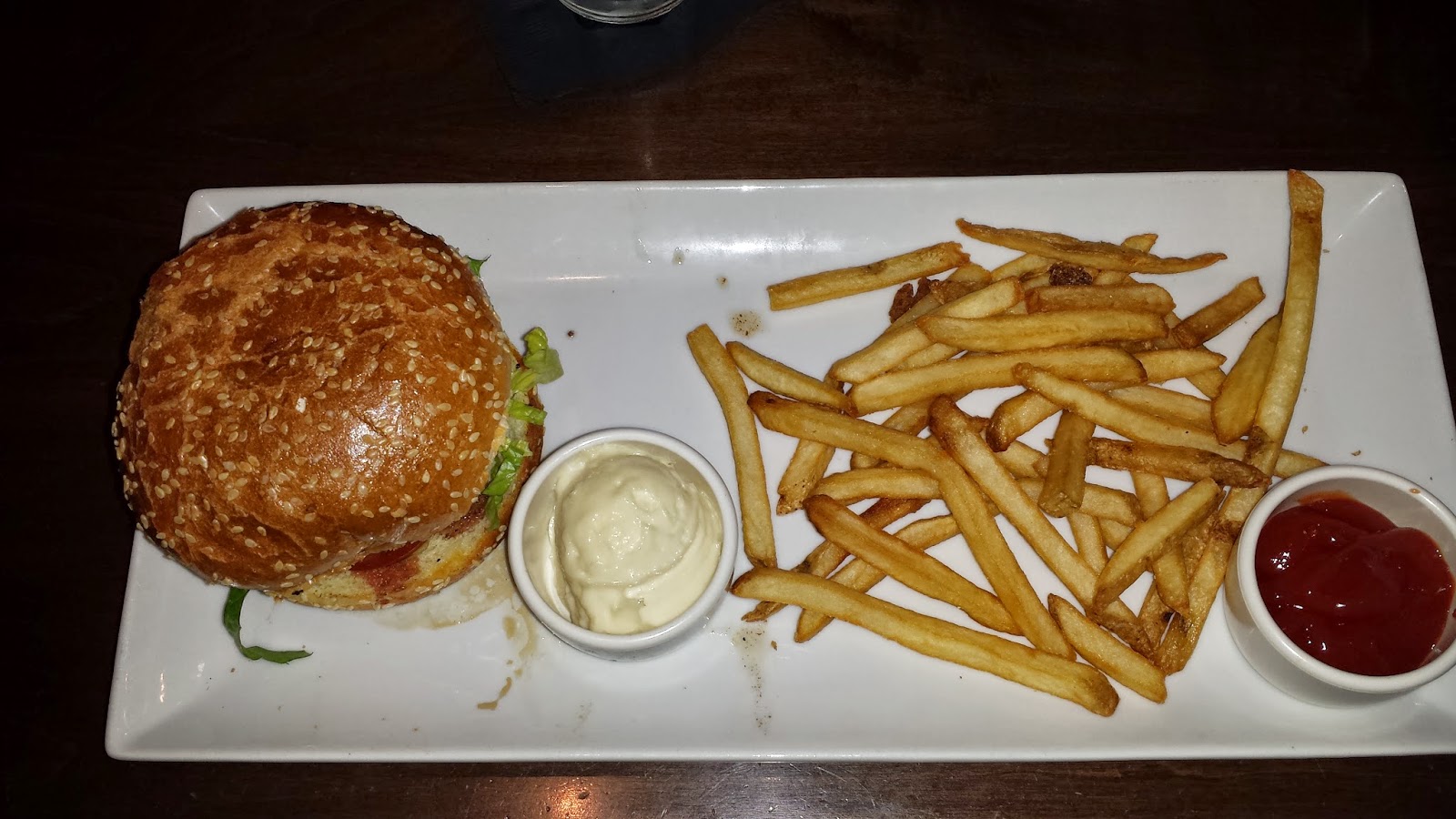 Our super sweet server convinced us to order dessert. We ordered the sweet potato bread pudding to share. It was DIVINE! 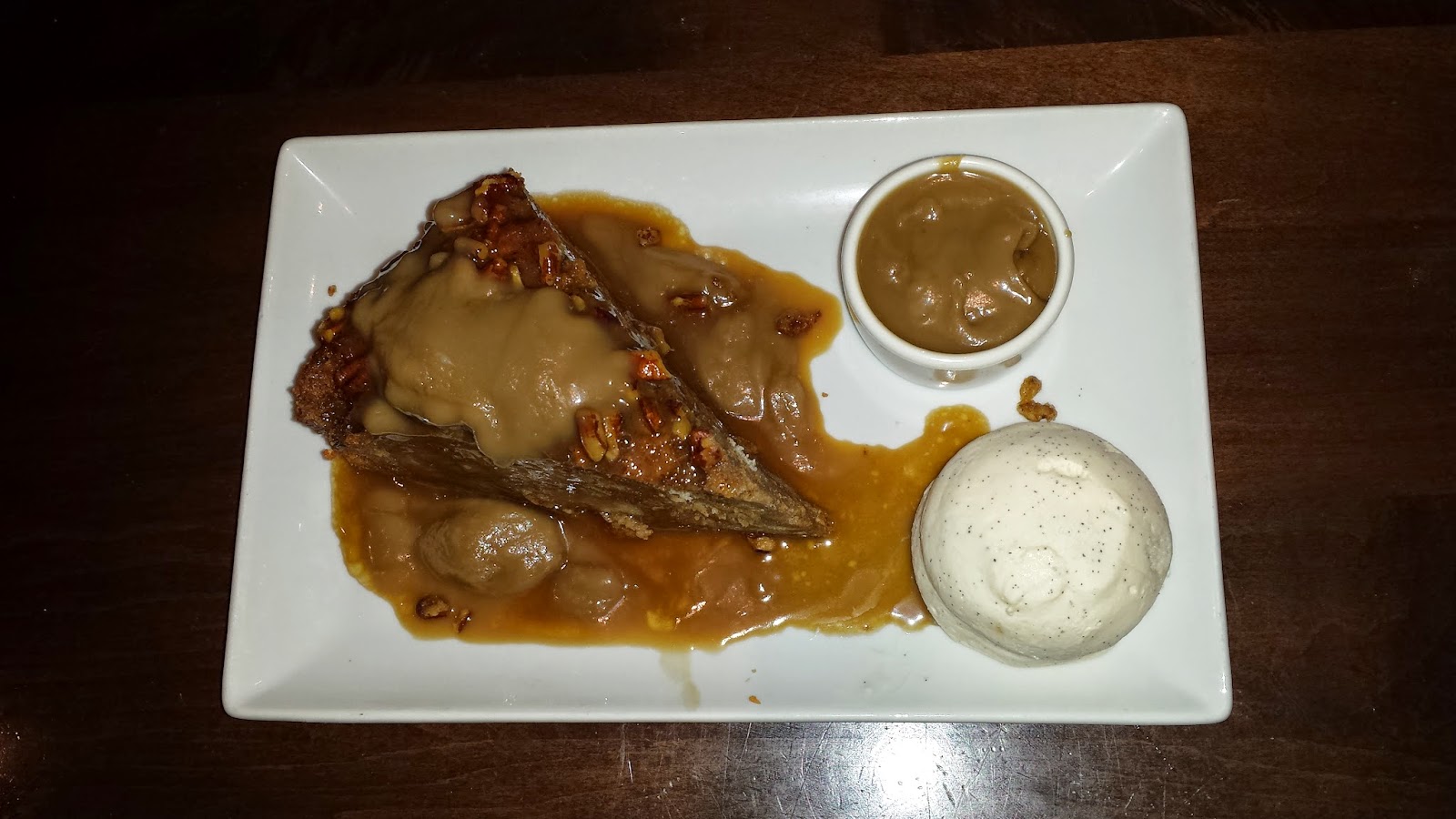 We then headed back home. The car ride was full of more laughter! I kept telling everyone I had run a sub 2 half marathon...and of course the great friends that they are...they kept saying, "Really? That's awesome! Congratulations!" And the song of the weekend was..."Shake It Off" by Taylor Swift! We had some pretty awesome dance moves to that song by the time the weekend was over! ;-)

This race was amazing! This was my 4th time running it so I knew what to expect but there were some added perks this year. Everyone got a finisher glass at the end since the series has been running for 5 years. They added some games at the after party. They had officers directing traffic when you were leaving the state park (traffic has always been a nightmare after the race in the past). And my favorite...FREE DIGITAL PHOTOS!!!! The photos haven't all been uploaded yet but when they are I will be sure to post! I can't wait to see them! And I LOVE that they are free!!!

Should you run this race? You'd be crazy not to! Knowing this was my 4th year running it should tell you it's a great race! I'll definitely be back next year!

QOTD: Do you get emotional when you cross the finish line?