I hosted my second DietBet game last month! Not only did I host it but I also played along! I only had a few more pounds to lose to make it to my goal weight and I knew the DietBet would be just the motivation I needed! It was a success! Playing the DietBet pushed me to reach my goal weight! :-)

Because it was so much fun I am hosting another DietBet starting Monday, October 27th! The holidays are coming up and if you're like me you want to look and feel great when you spend time with your family! I hope you will join me for Road Runner Girl's Fall Into Shape DietBet!!! 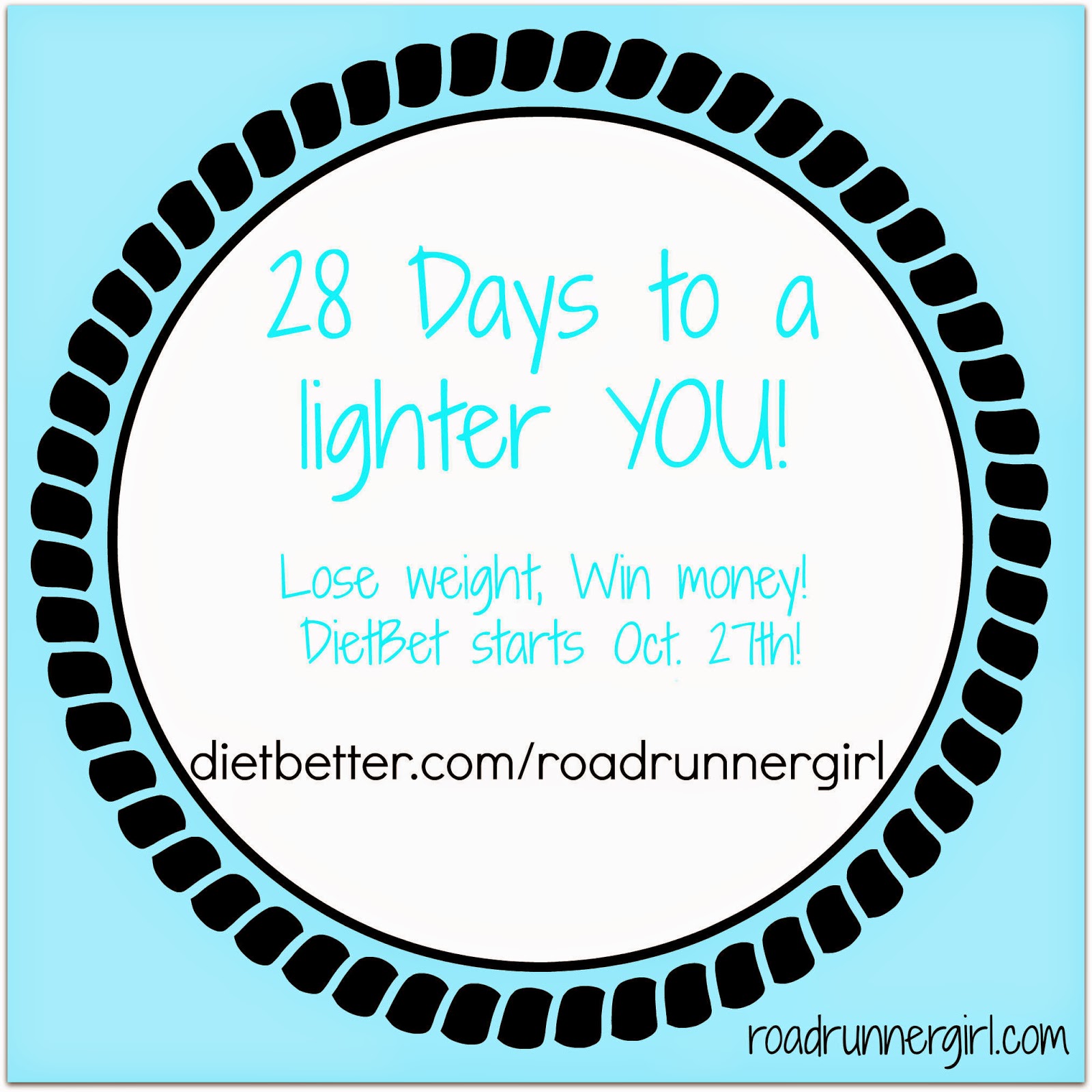 To refresh your memory, here's how DietBet works:1) Join a game. You can join my game HERE!2) The pot grows as players join3) Whoever hits the goal splits the pot!Sounds easy, right? The game I'm hosting is a 4 week game with a goal to lose 4%. You start out with a bet of $25. During official weigh in time (October 25th-26th) you will submit two digital pictures to the DietBetter referees. One picture will be a head to toe shot of you standing on the scale in airport security attire (that's light indoor clothing with no shoes, belt, hat, outerwear, pocketbook, watches or accessories and empty pockets).  The second picture will be a close up of your official weight on the scale with a piece of paper in the shot showing the word of the day (will be distributed by Dietbetter at the time of the weigh in and serve as an official timestamp). No one will see your weight or pictures except the Dietbetter Referees.At the end of the game you will have a final weigh in (with photo proof). If you made the 4% goal...you split the pot with the other players that also made the goal! It's a win win situation! You win by losing weight AND you win by earning some money! The more players that play...the bigger the pot!
Sounds fun right? I promise you it is!!! And the game is over November 24th...just in time for that Thanksgiving feast!
I told you I had fun playing didn't I? Well here's how it went for me. I started the game with my official weigh in photos. 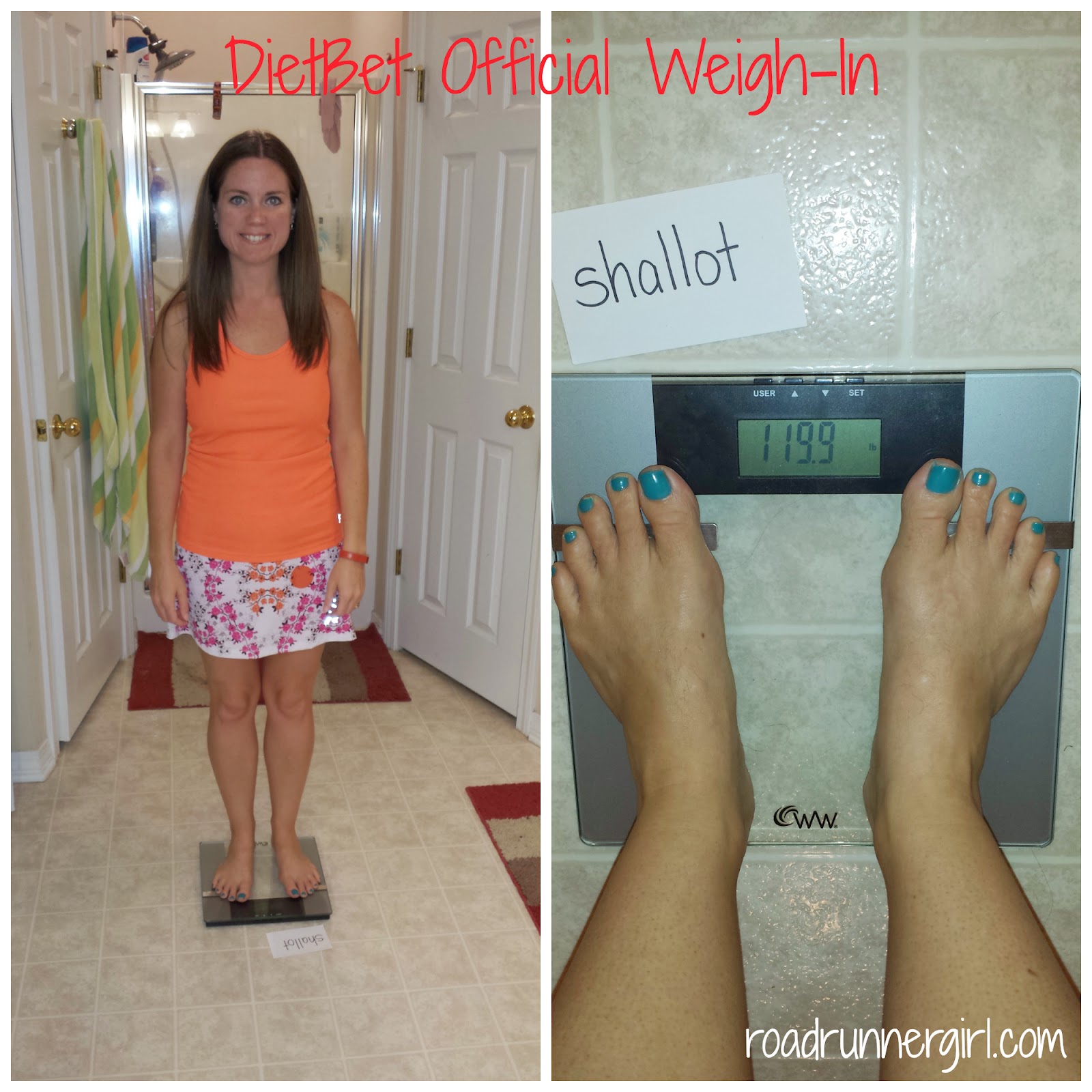 To win the DietBet I needed to lose 4% in 28 days...or 4.8 pounds. The weight I needed to be at the end of the game in order to win was 115.1.
So for the next few weeks I did what I was doing already...counted my calories using My Fitness Pal. I ran. And I checked in on my DietBet page every day to see how all the other players were doing. We commented on each other's posts and encouraged and motivated each other. It was great! I could weigh-in as much as I wanted (they weren't official weigh-ins so I didn't have to submit photos) to see my progress.
Was it tough? Well yes. Dieting IS tough. But when you have money on the line it makes you even more motivated. And I had all the other players in the game that I felt like I couldn't let down.
The 28 days FLEW by! Before I knew it it was time to do my last weigh-in to determine if I had won. I was so nervous stepping on that scale. And on the first weigh in day...I was OVER by a pound! I was so upset! I had just weighed a few days before and I was under by a pound! I got really nervous but knew I could weigh in one more day. So the next morning I weighed again....and there it was! My winning weight of 114.4!!!! Whew!!! I'm not sure what happened the day before...water weight? Maybe I was swollen for some reason? I have no clue! 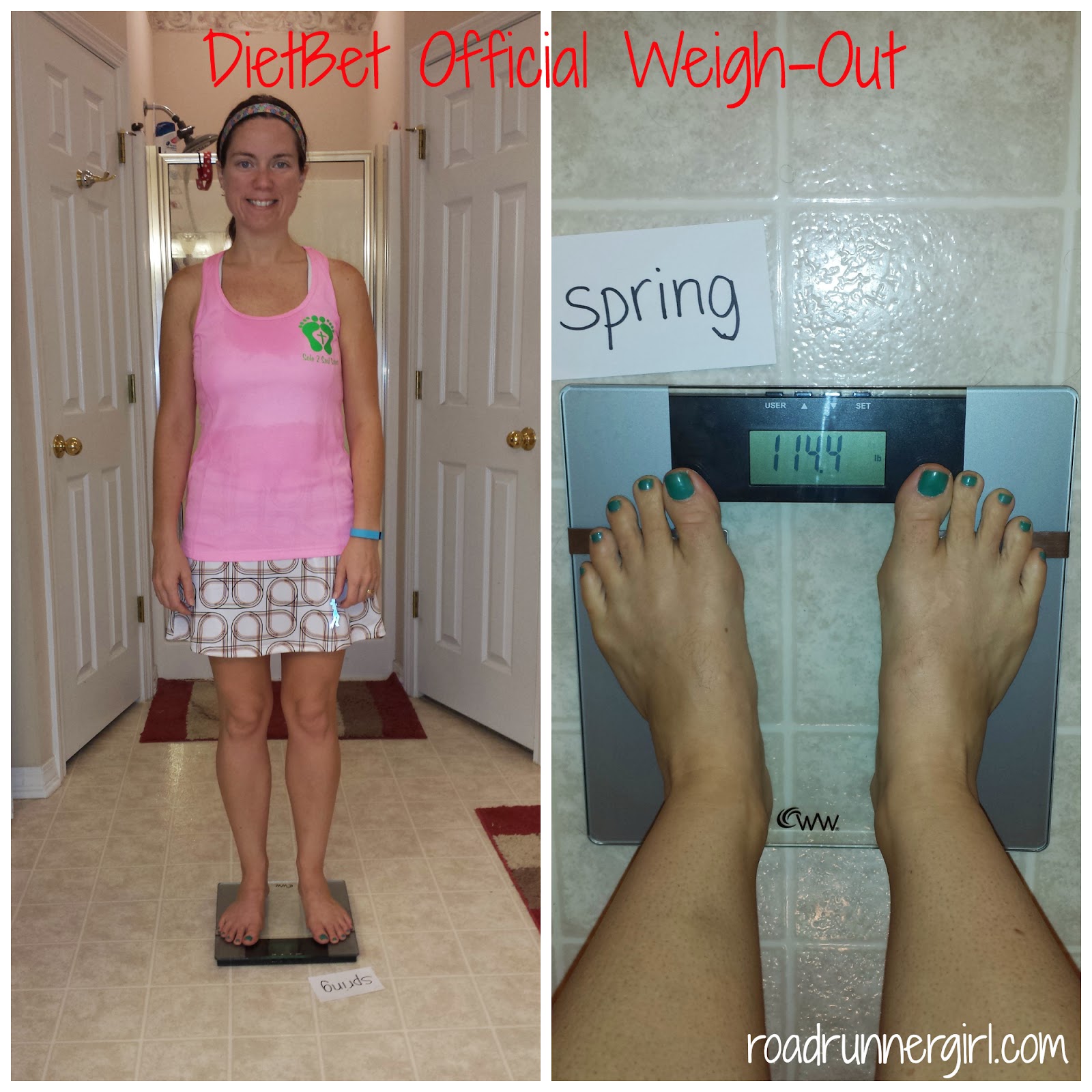 I hope you will join my Road Runner Girl's Fall Into Shape DietBet!!!! Sign up to play TODAY!!!

QOTD: Have you ever played a DietBet game? Are you going to join my game?