The alarm went off at 3 AM. And I only got about 3 hours of sleep. I was so anxious and so excited that I just couldn't sleep! Disney races are my favorite but I hate the early wake ups. It didn't take long and I was all decked out in my Olaf attire. I had to add running tights, a long sleeve shirt, and gloves because it was cold outside. 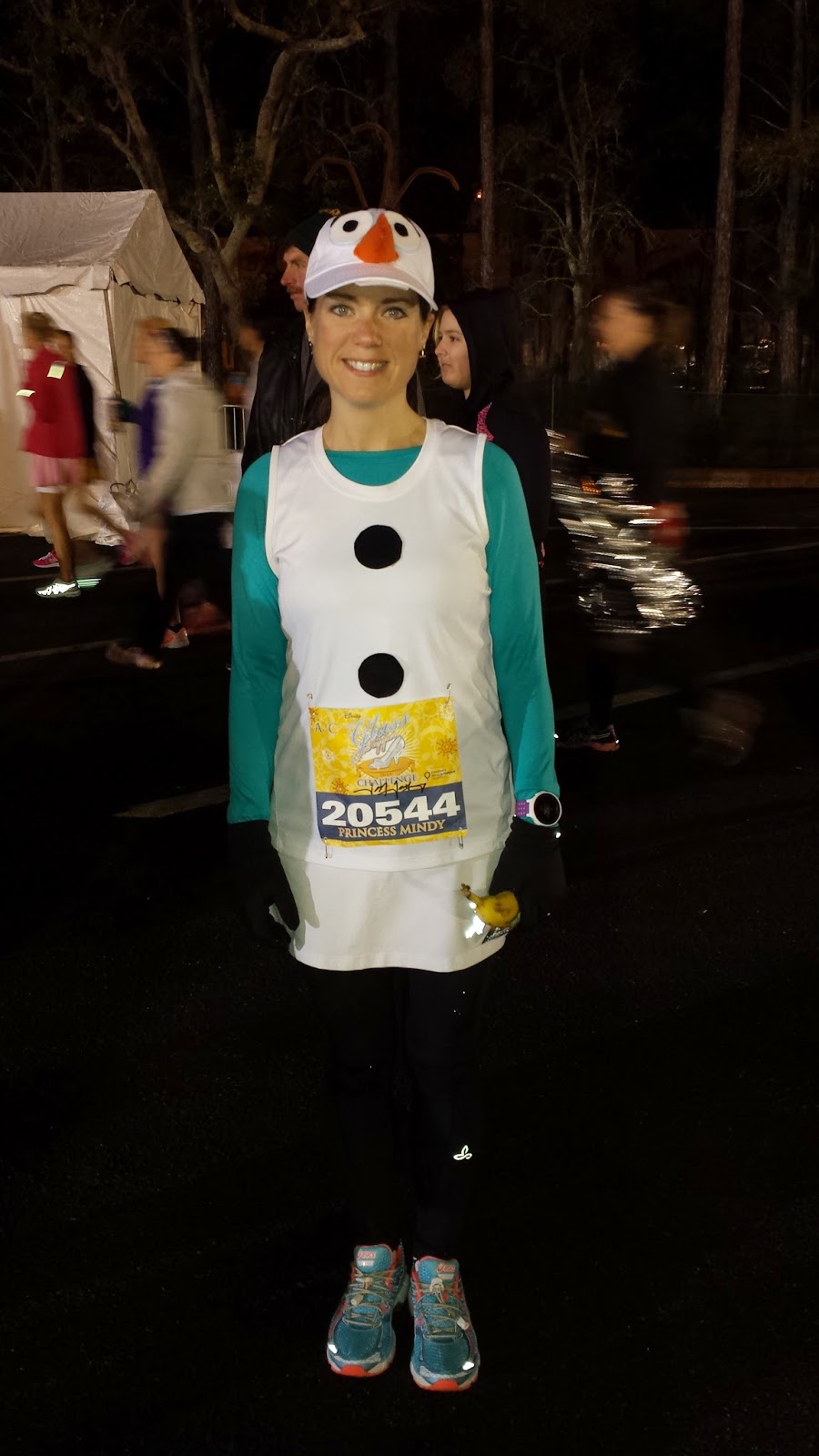 I headed to the lobby around 3:25. I was meeting Christine there and we were going to ride the bus together! I couldn't wait to meet her! It didn't take me long to spot her in her awesome purple capris! We loaded the bus and talked non stop until we made it to Epcot. She was so sweet and I felt like we had so much in common! It's funny how you feel like you already know someone when you've been reading their blog for so long! ;-) 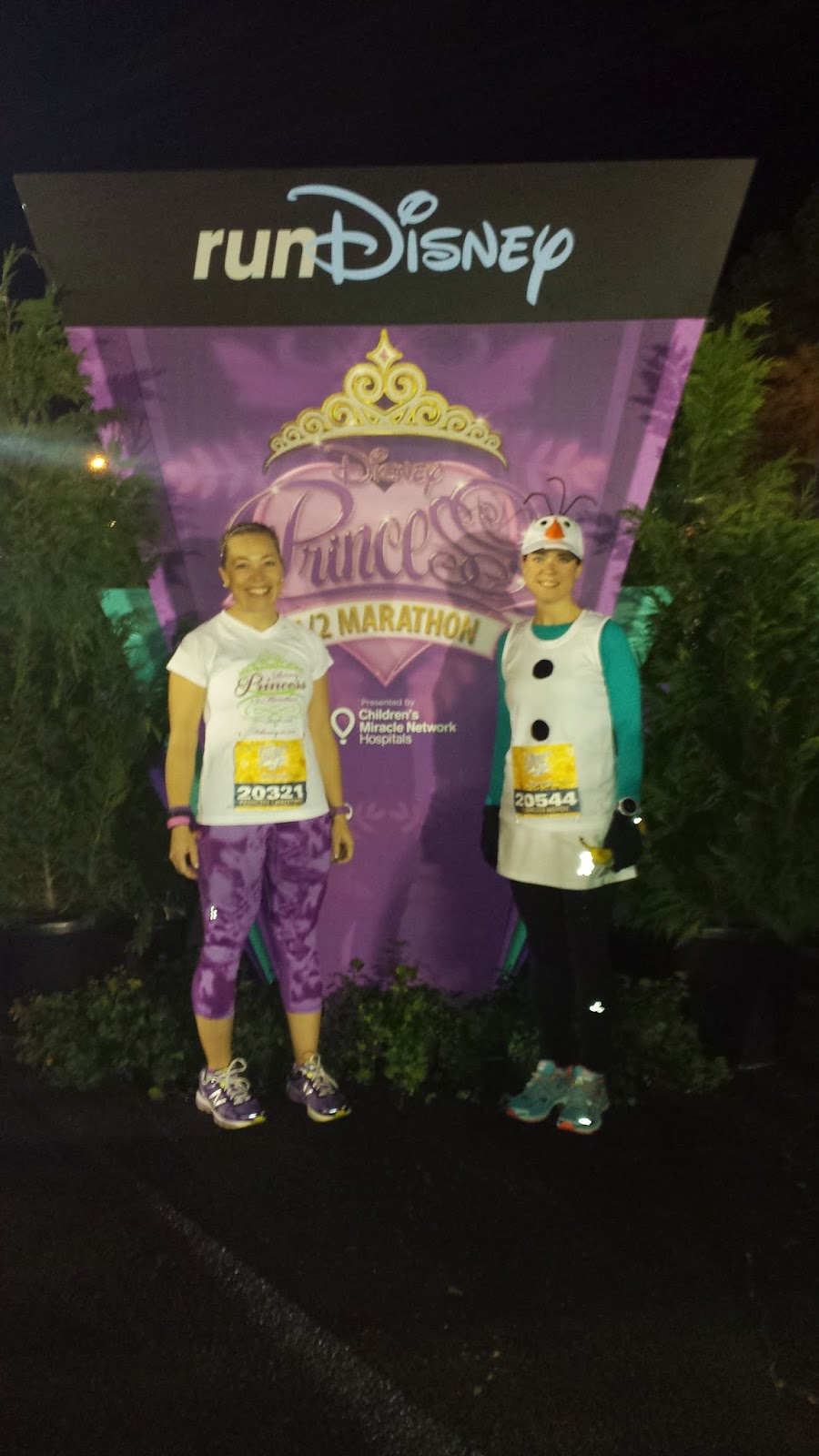 As we were walking guess who came up behind us? Maleficent...aka Dani!!! I was thrilled to see her again...and I got to meet her sweet wife Tori! By the way Dani...my son Sawyer LOVED your Maleficent costume! ;-) 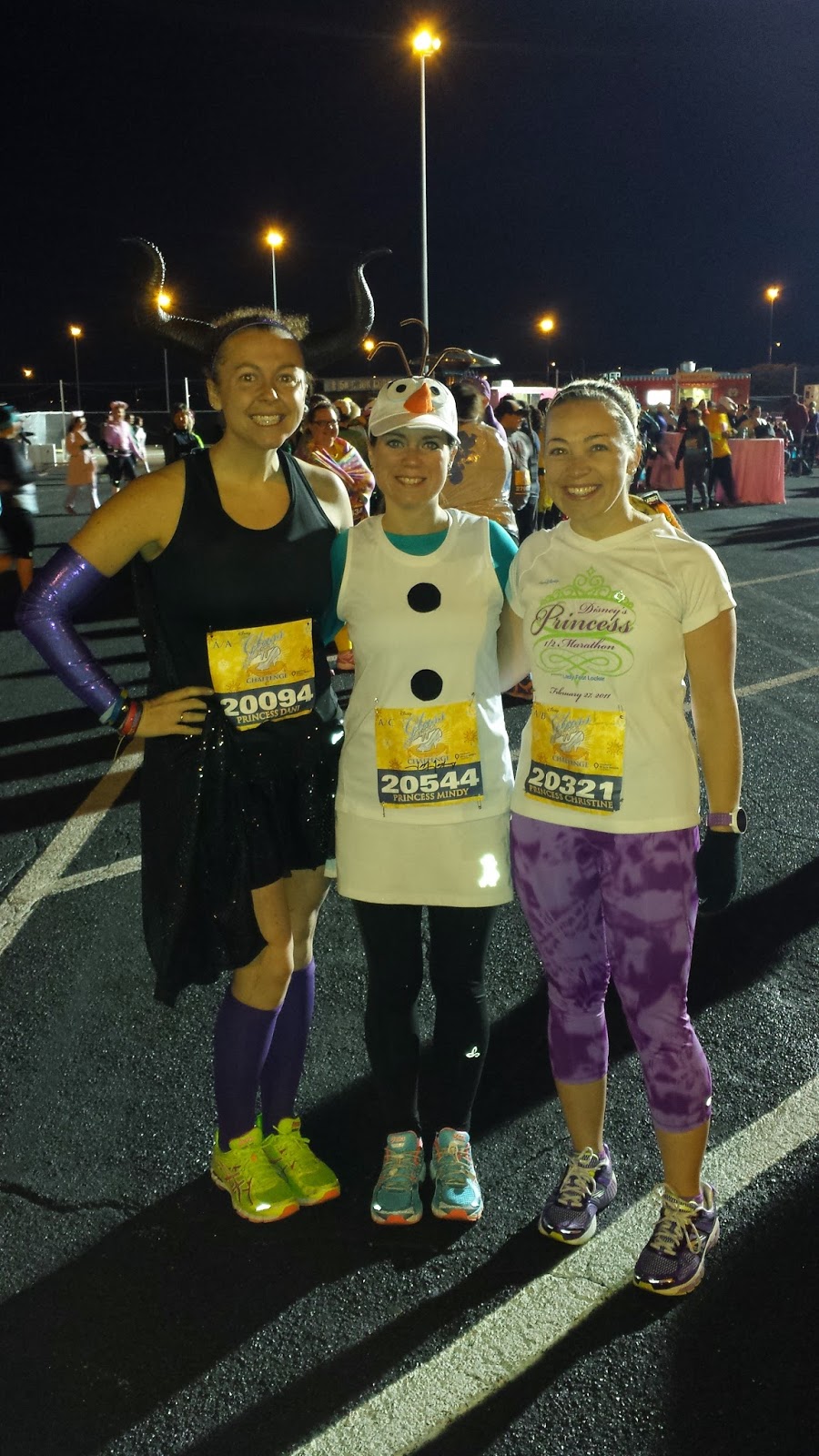 Not too long after that I got a text from Karen asking where I was. We had planned to meet up for a Frozen picture since she was Anna, her friend was Elsa, and I was Olaf! And of course it was so awesome seeing her again too!!! I hung out with her until it was time to split at our corrals. Thanks for letting me tag along with you Karen! 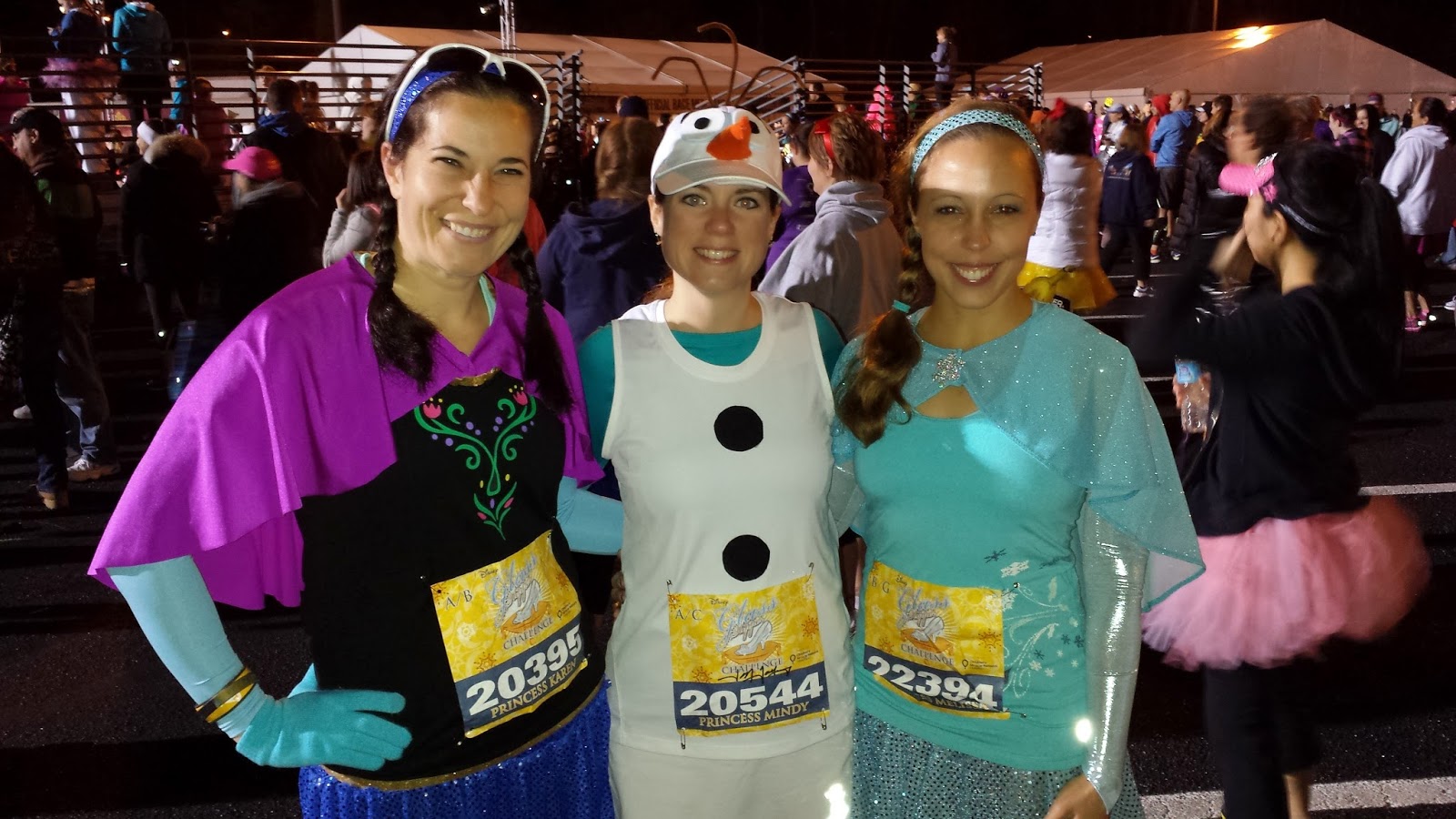 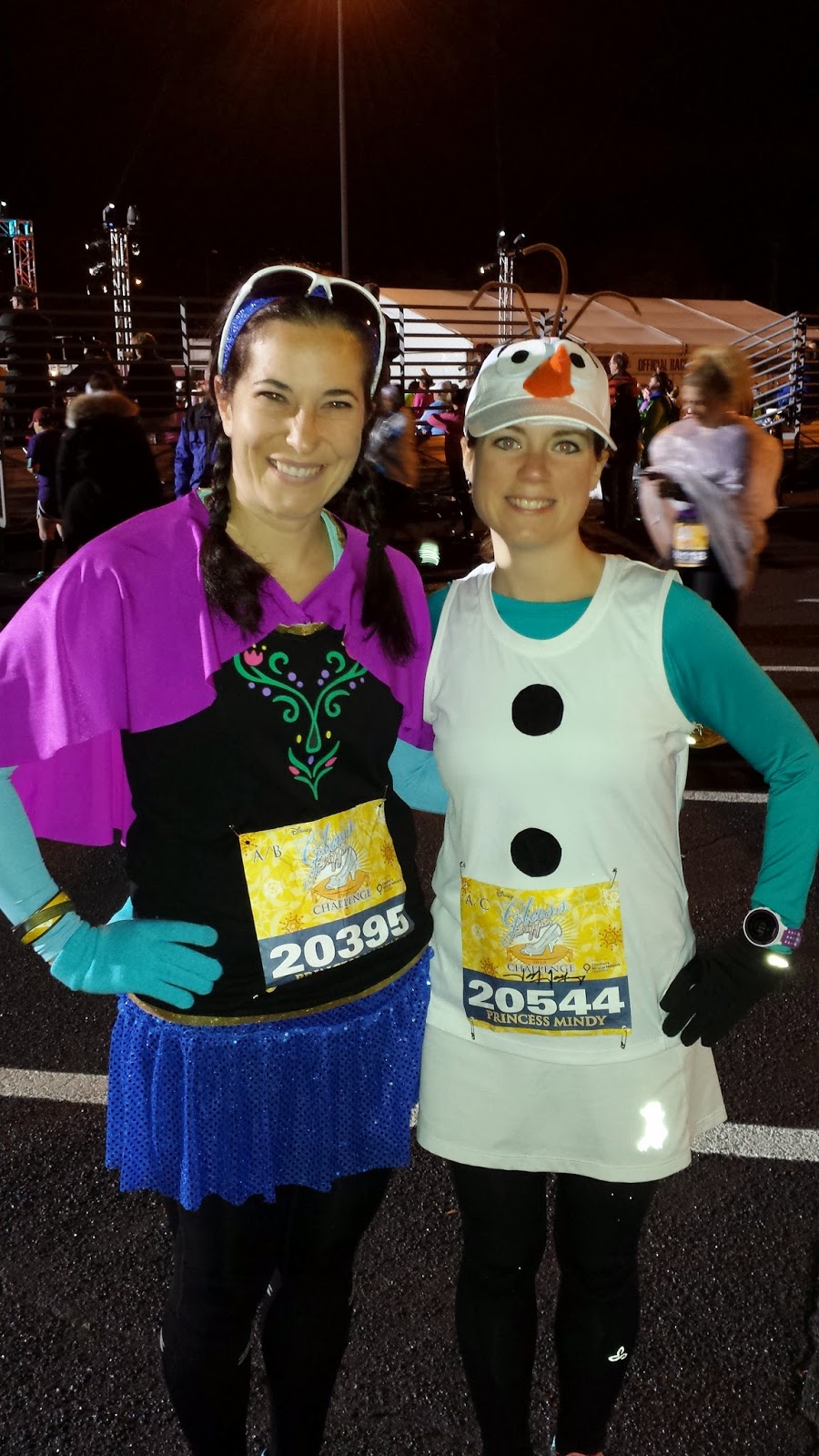 Before long it was time to head to our corrals! I was super excited about being in corral A for this race. My goal was to stop and take pictures with every single character and that's what I did!

I love that for the 10K the start line is right there. There's no walking a mile to the corrals like you have to do for the half. It didn't take long and we were at the start line! They let the wheelchairs go and then it was my turn!!! 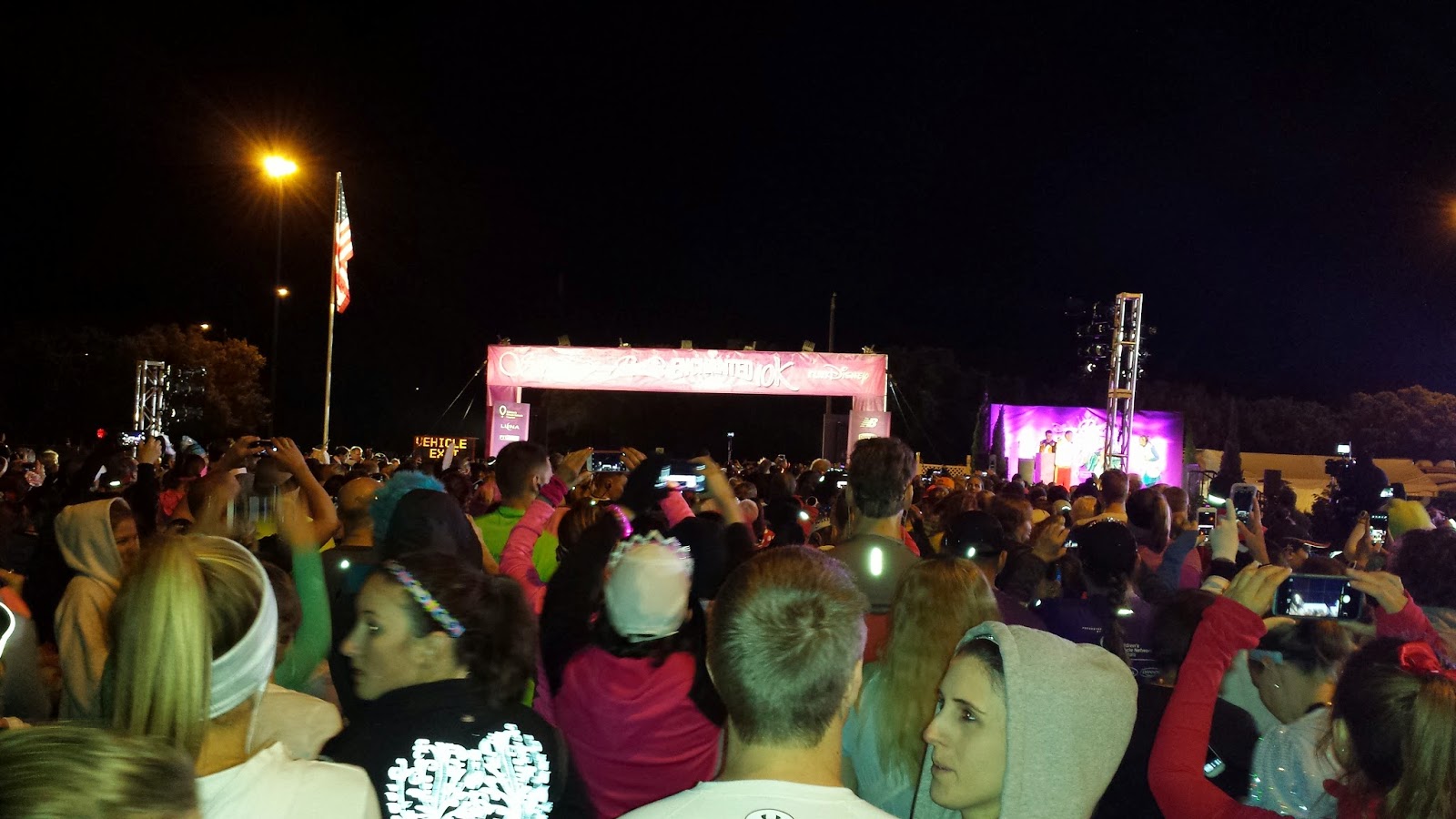 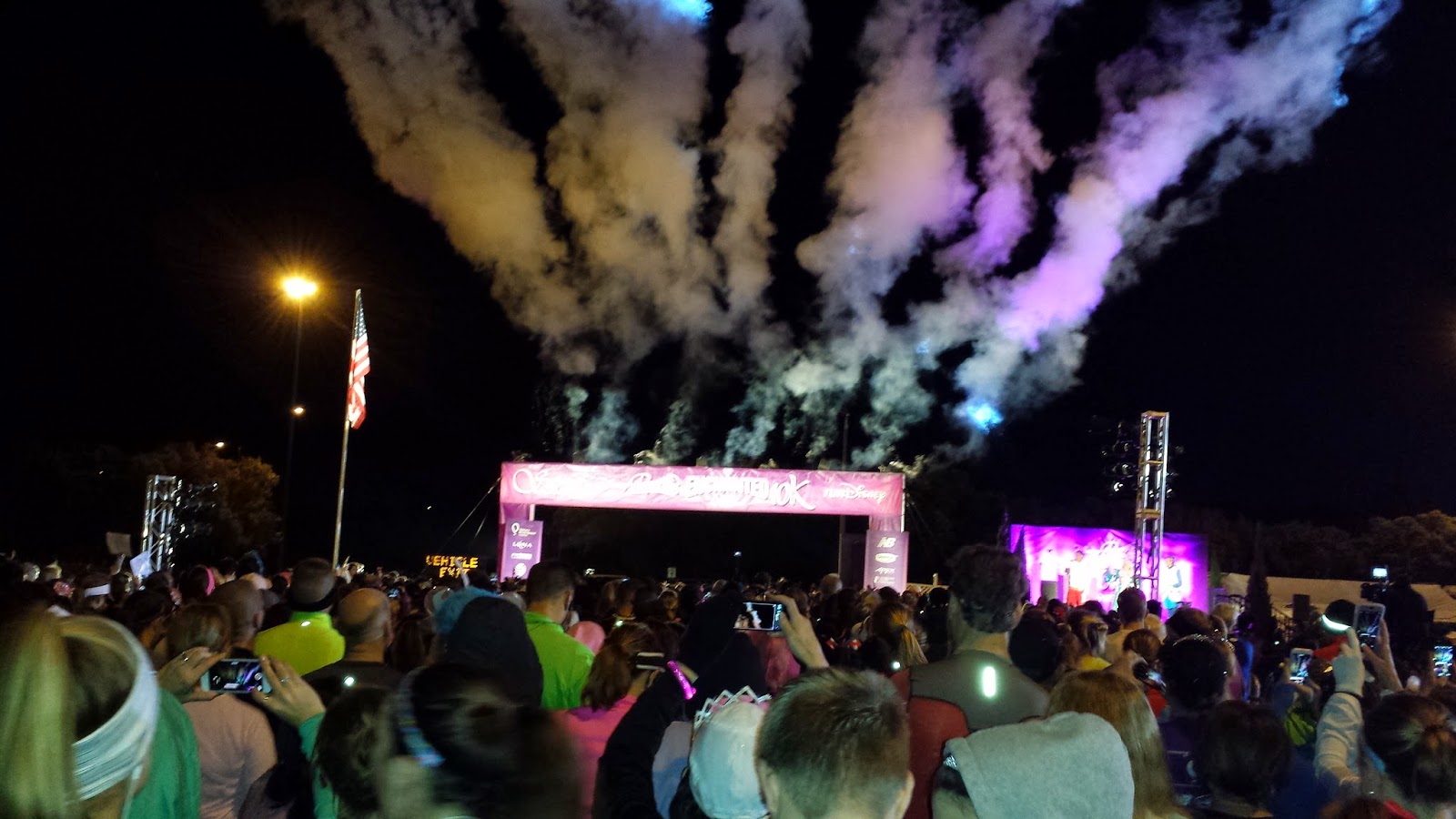 Because I was in that first corral everyone was running pretty fast. I didn't have to weave in and out of too many runners and that was awesome! A whole different experience of a runDisney race for me!

Within the first mile or so we came to an overpass. And guess who was on the top cheering us on? Anna and Elsa!!! 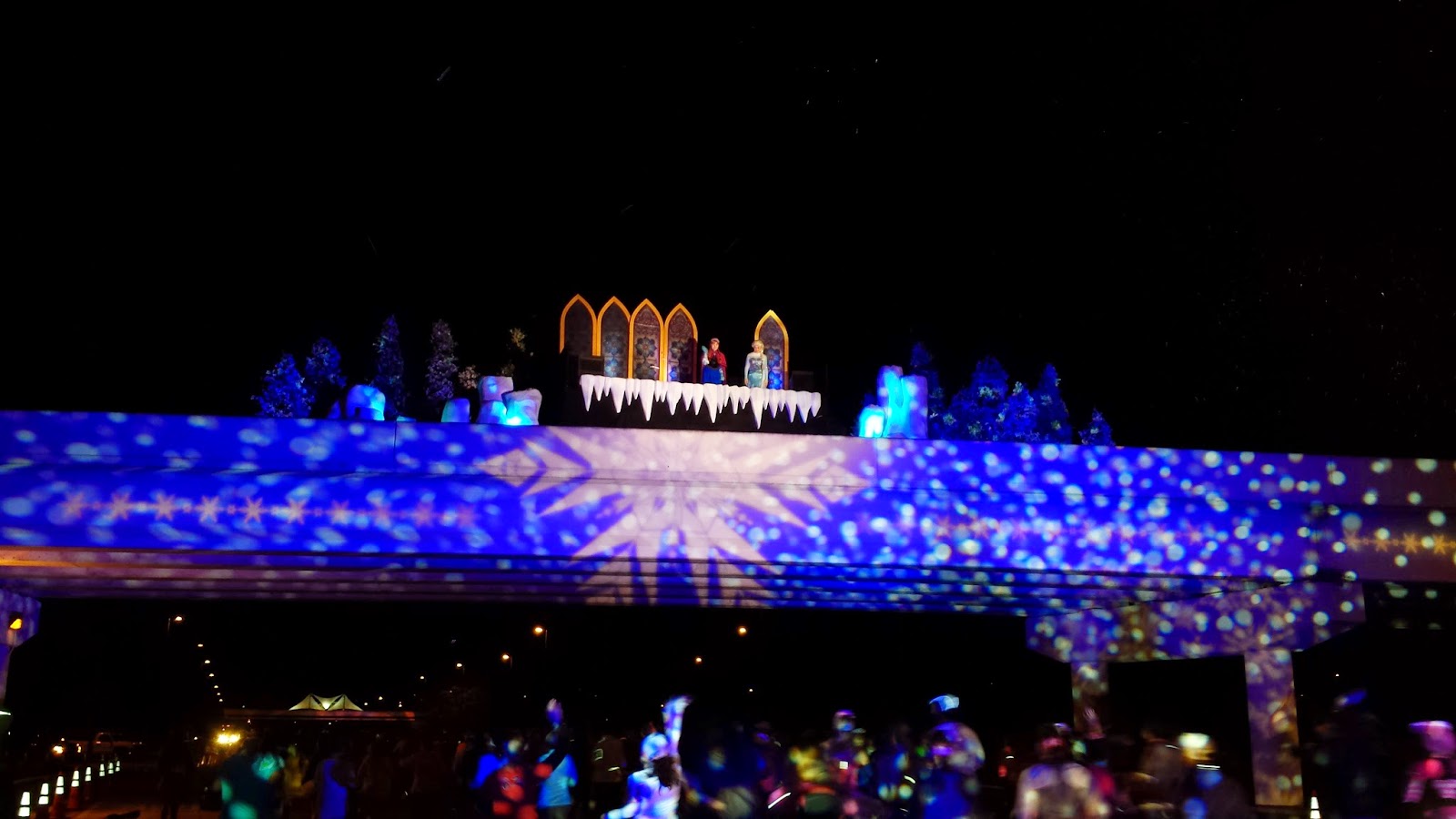 Around mile 2...there were Tinkerbell and Periwinkle!!! 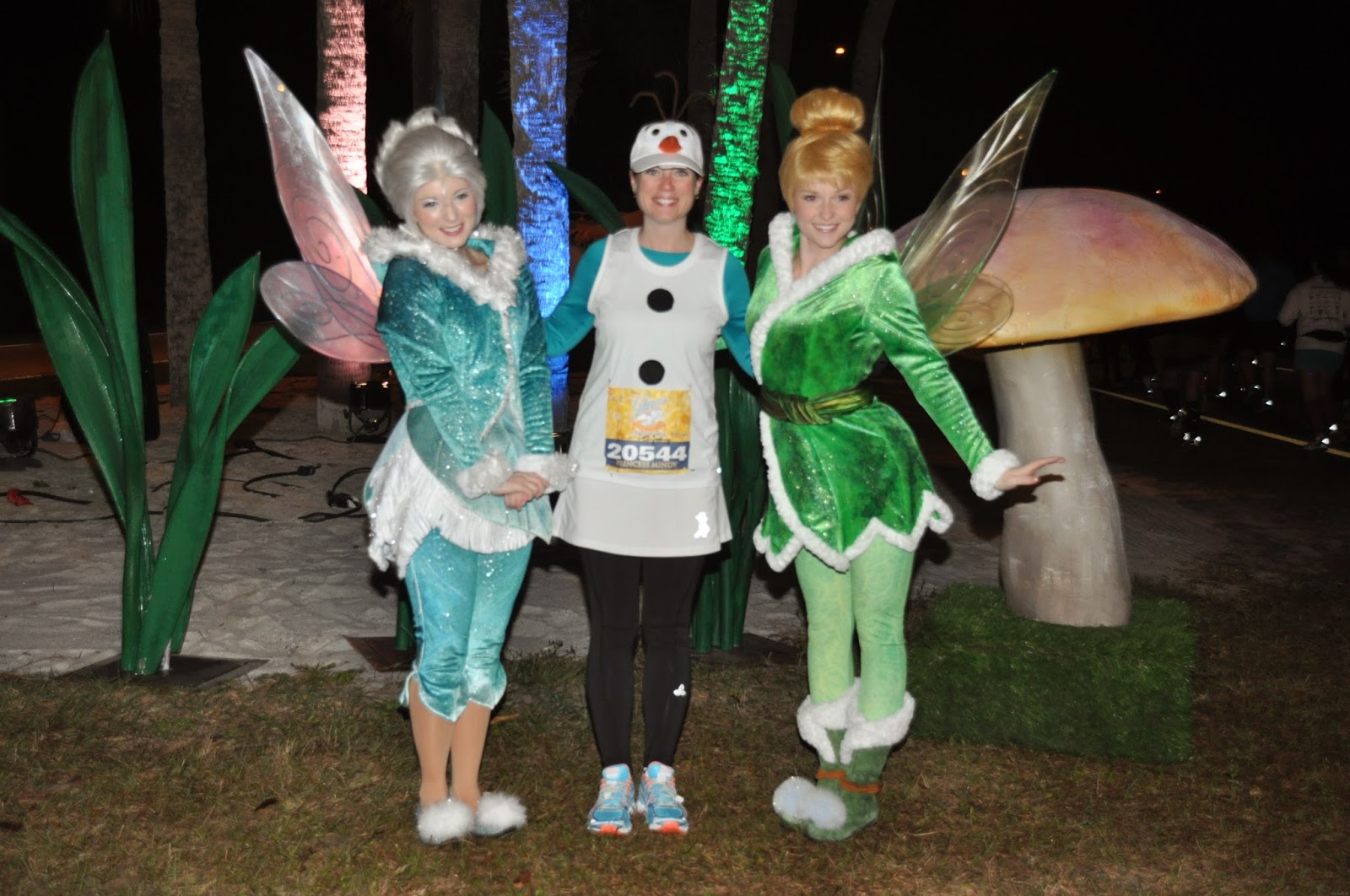 Around mile 3.5 we entered the World Showcase in Epcot. It was beautiful with all the lights on! And they had music playing as we were running through! It really was magical! 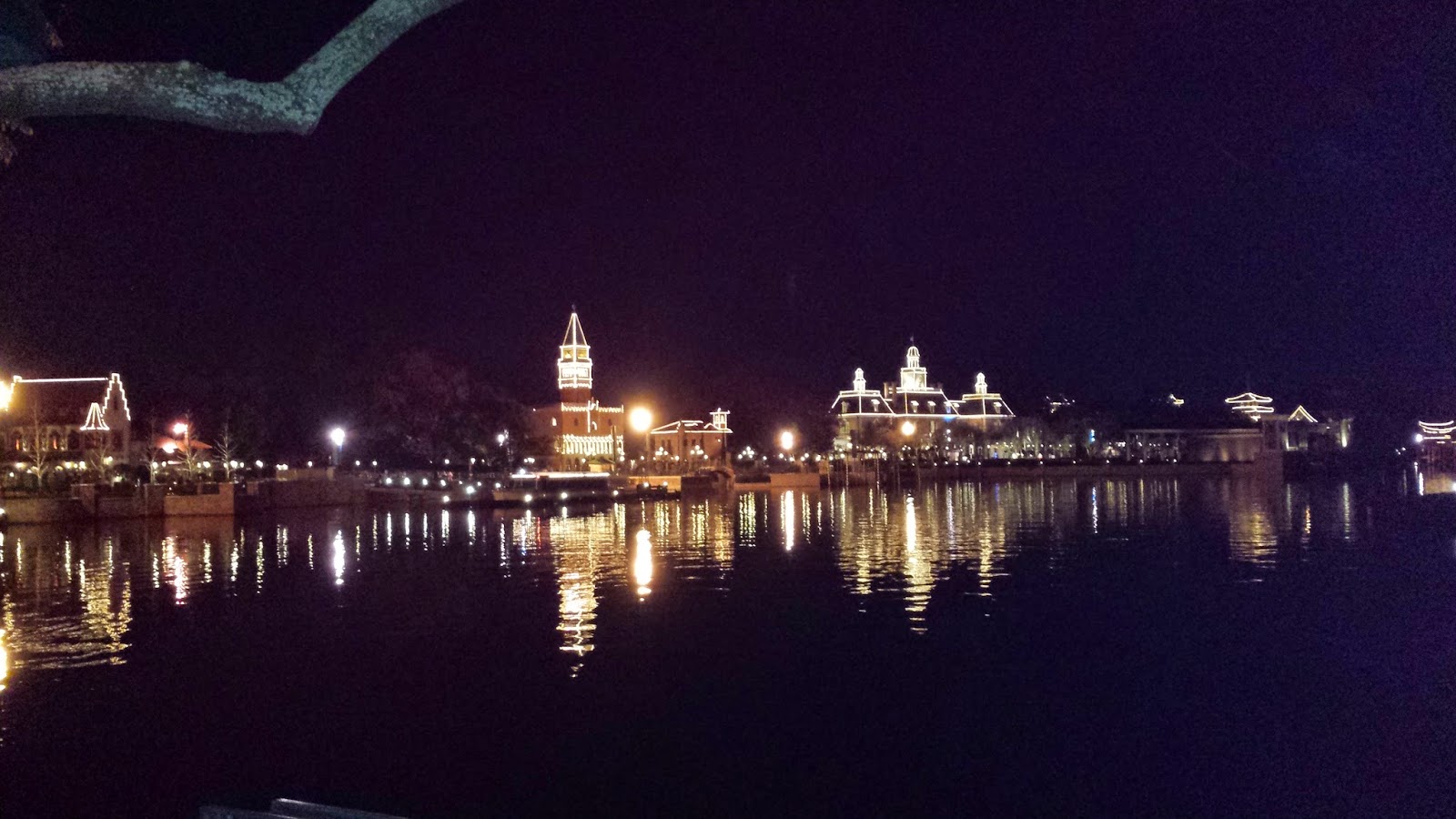 Then I saw...Jiminy Cricket in Germany!!! 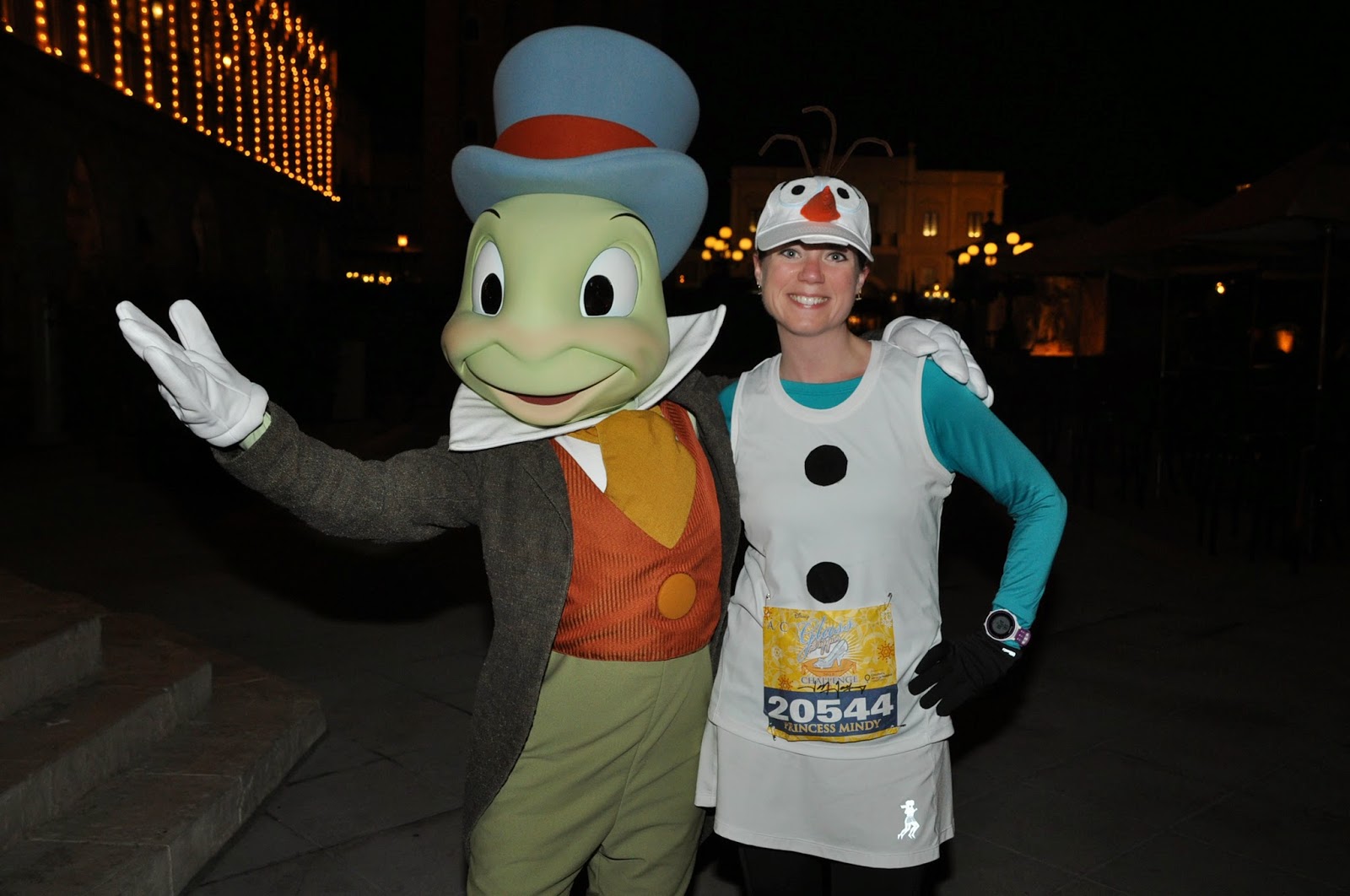 And Marie in France!!! 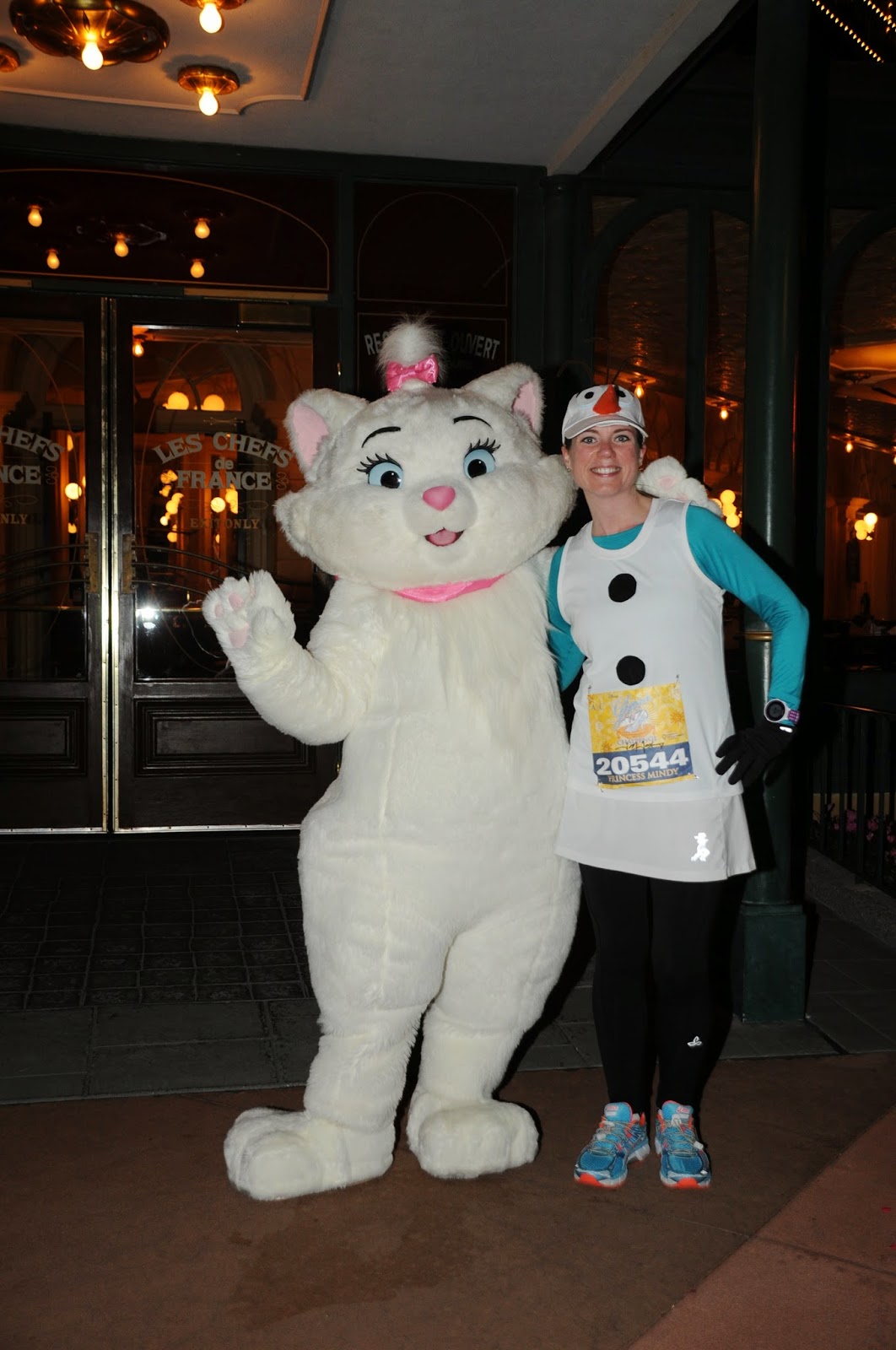 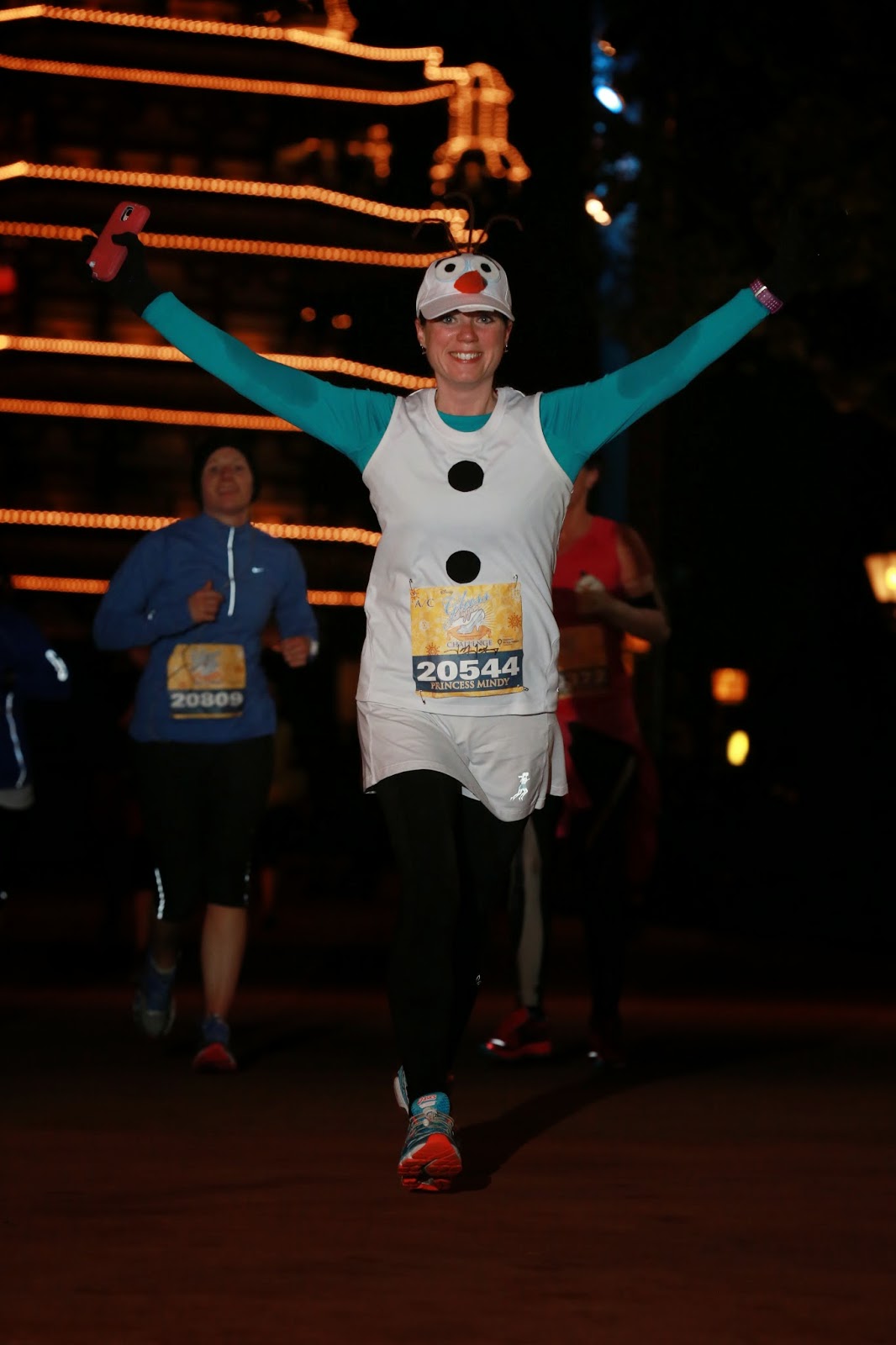 Around mile 4.5 we exited Epcot at the International Gateway and we entered the Boardwalk. And there was Baseball Donald! 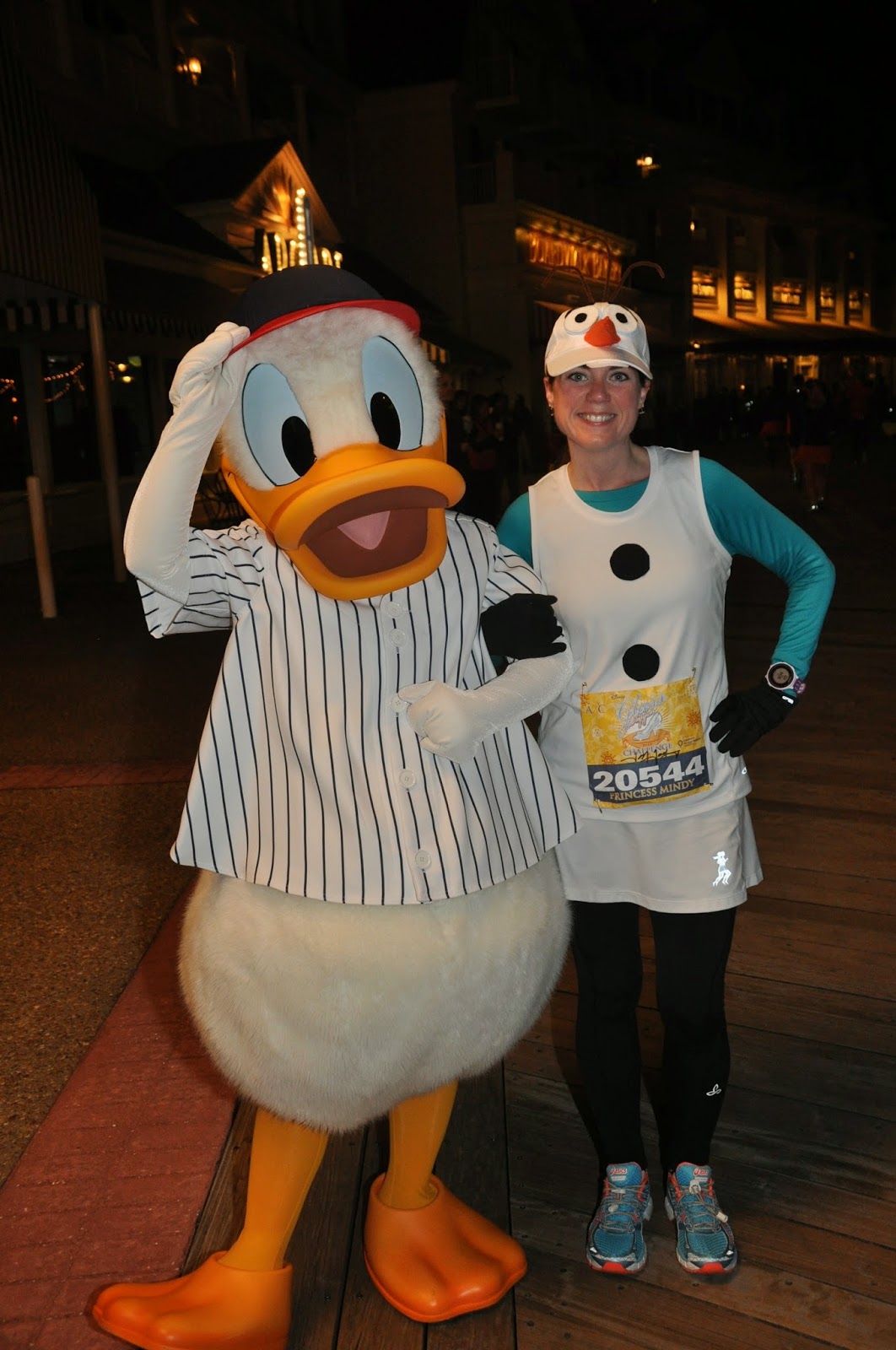 There were some hills to get over but I pressed on. I was feeling amazing and running fast and strong! Right before entering Epcot again I looked over to my right and there was Minnie! I HAD to stop since she is one of my favorites! 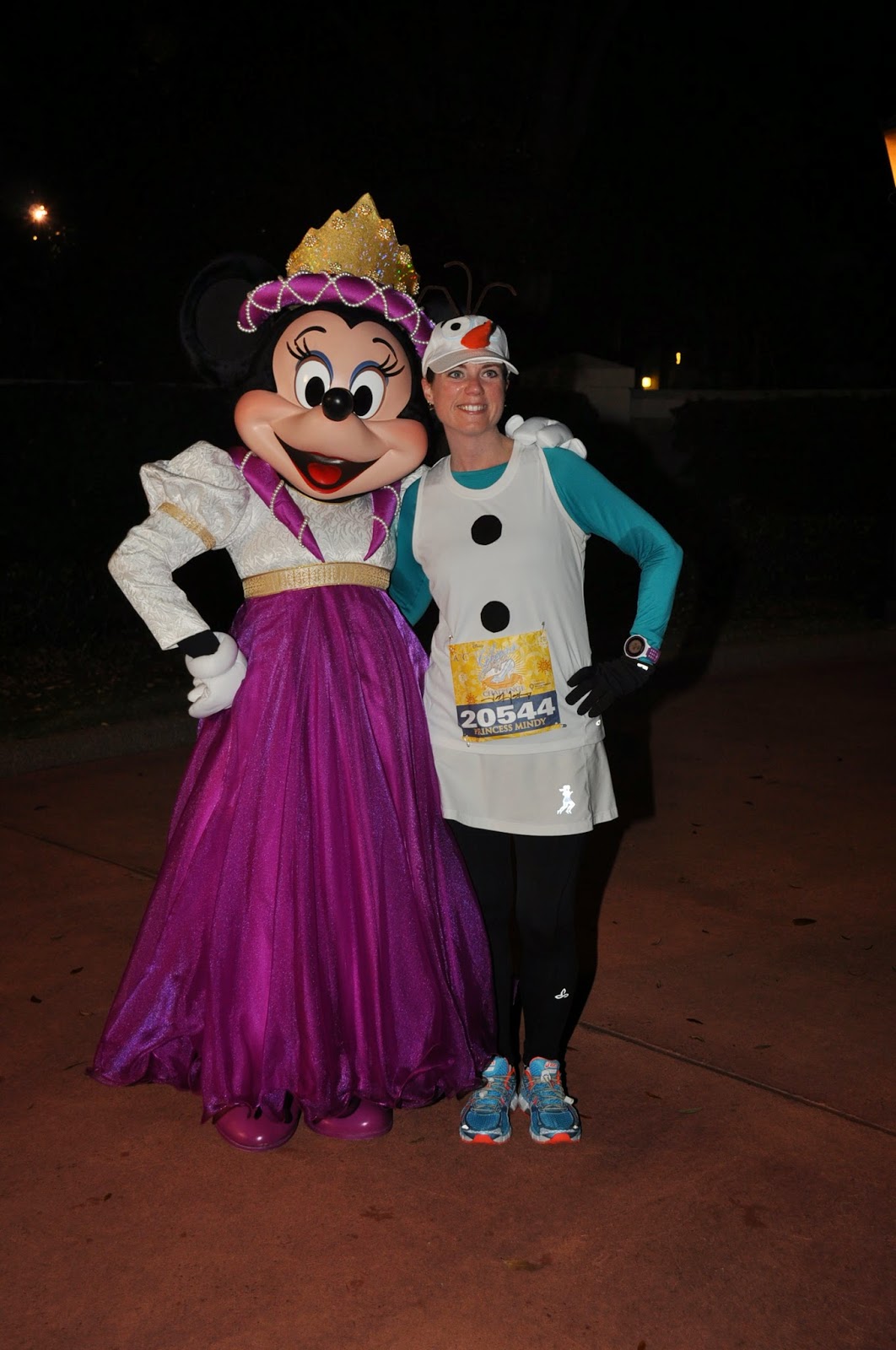 Then it was back into Epcot! 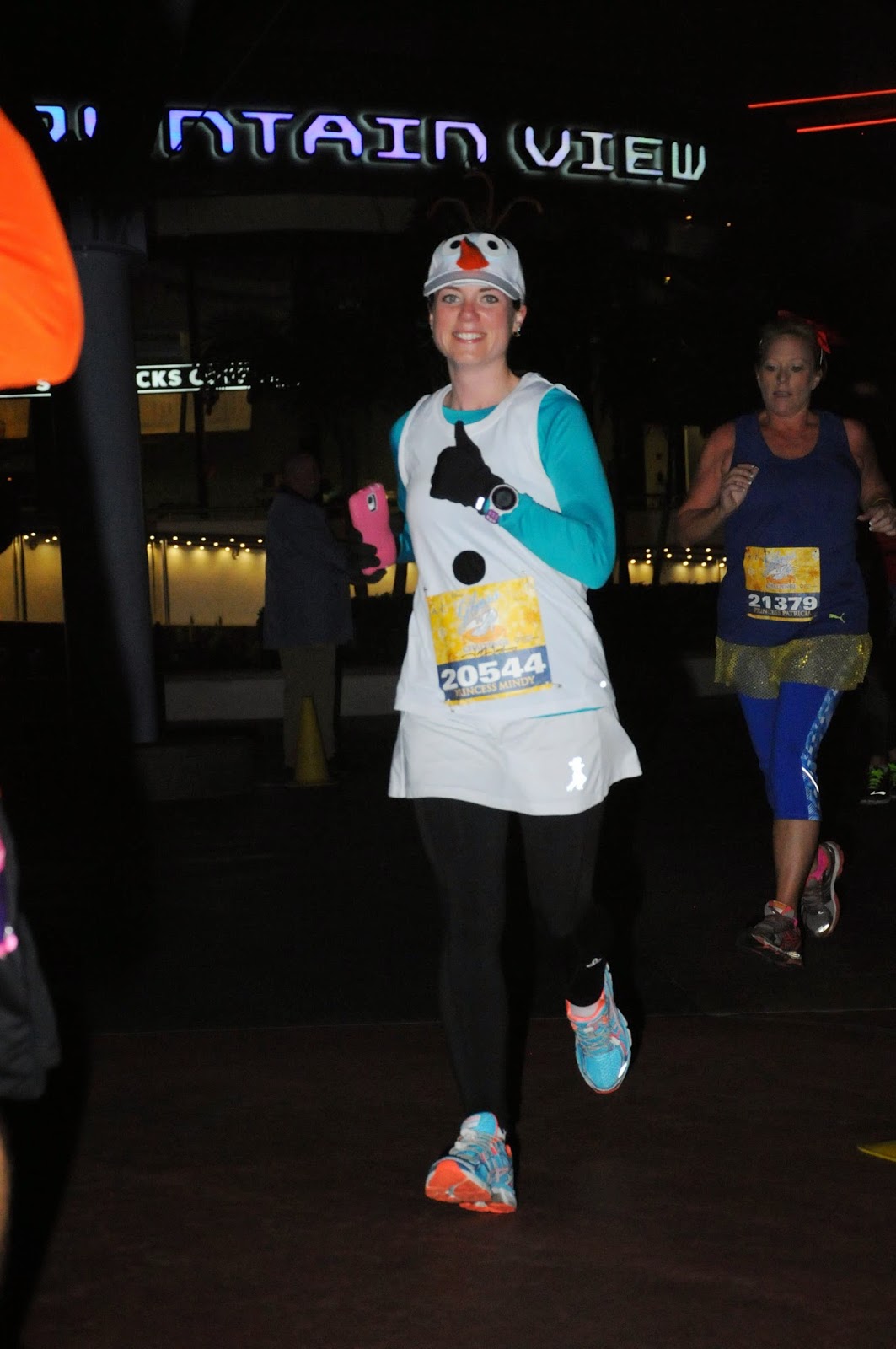 There was Space Goofy! 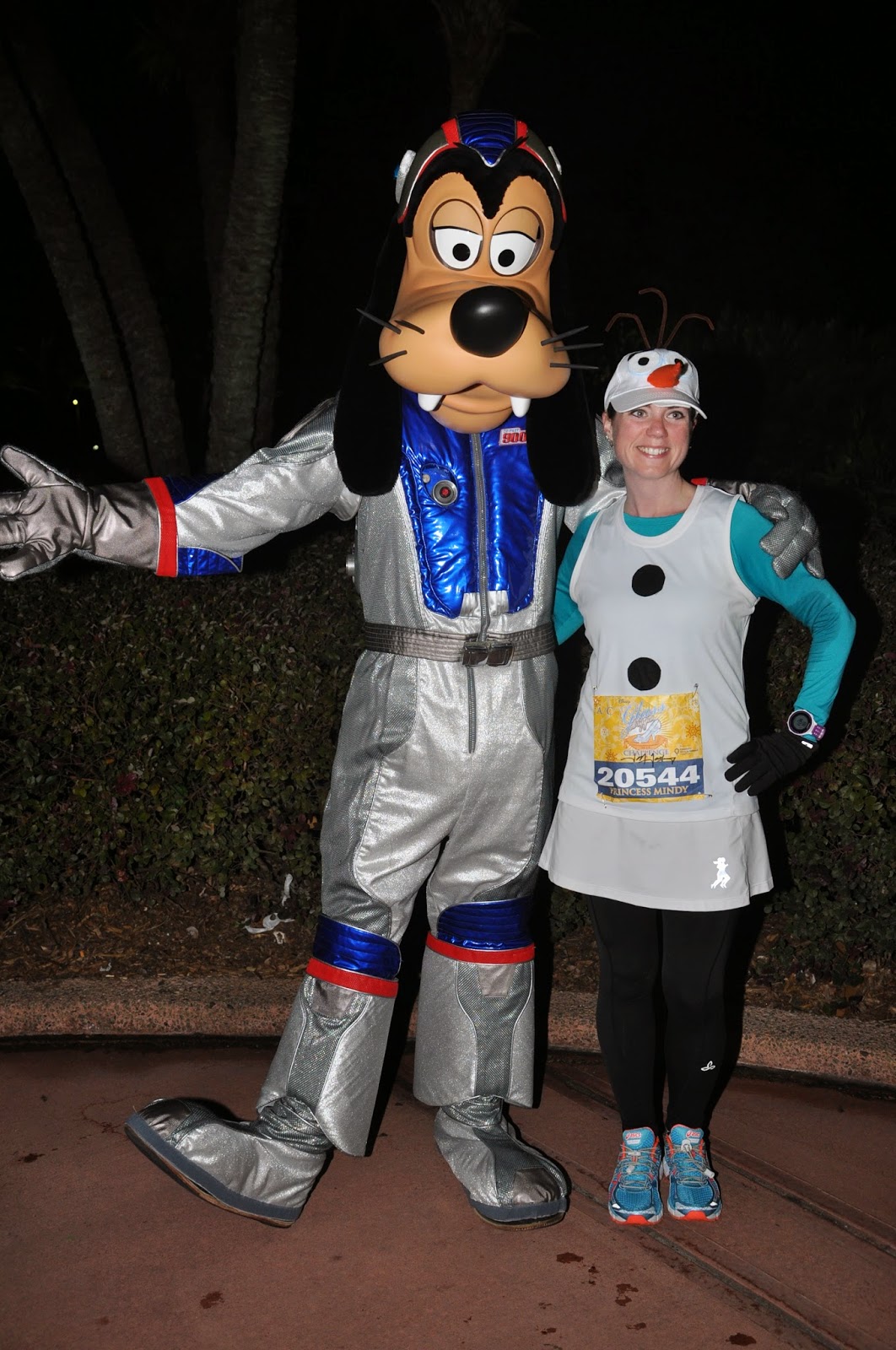 And then it was time to pass by Spaceship Earth and head to the finish line! 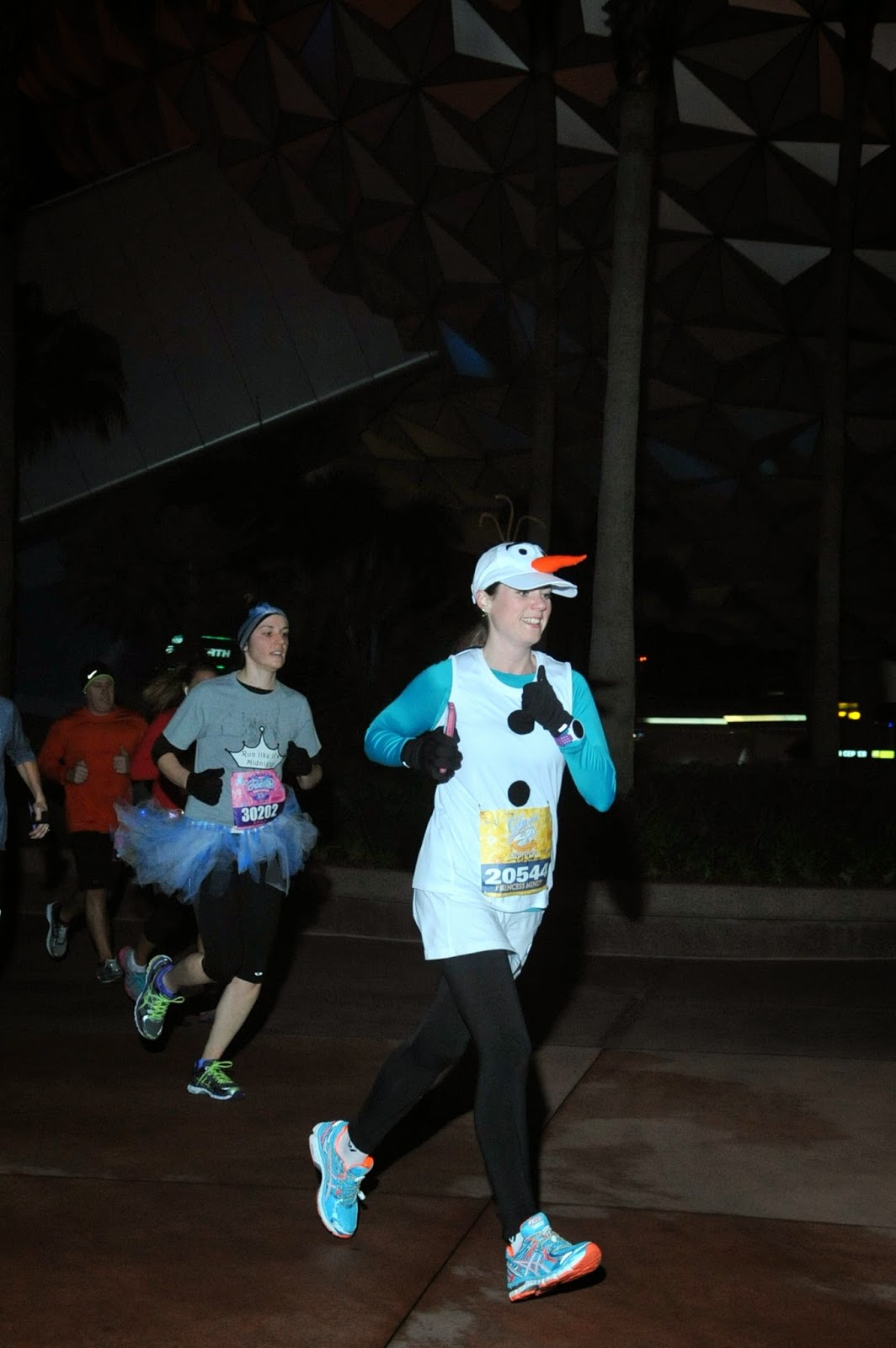 I knew I didn't have far to run at this point and so I kicked it into gear! I saw the finish line and was all smiles! 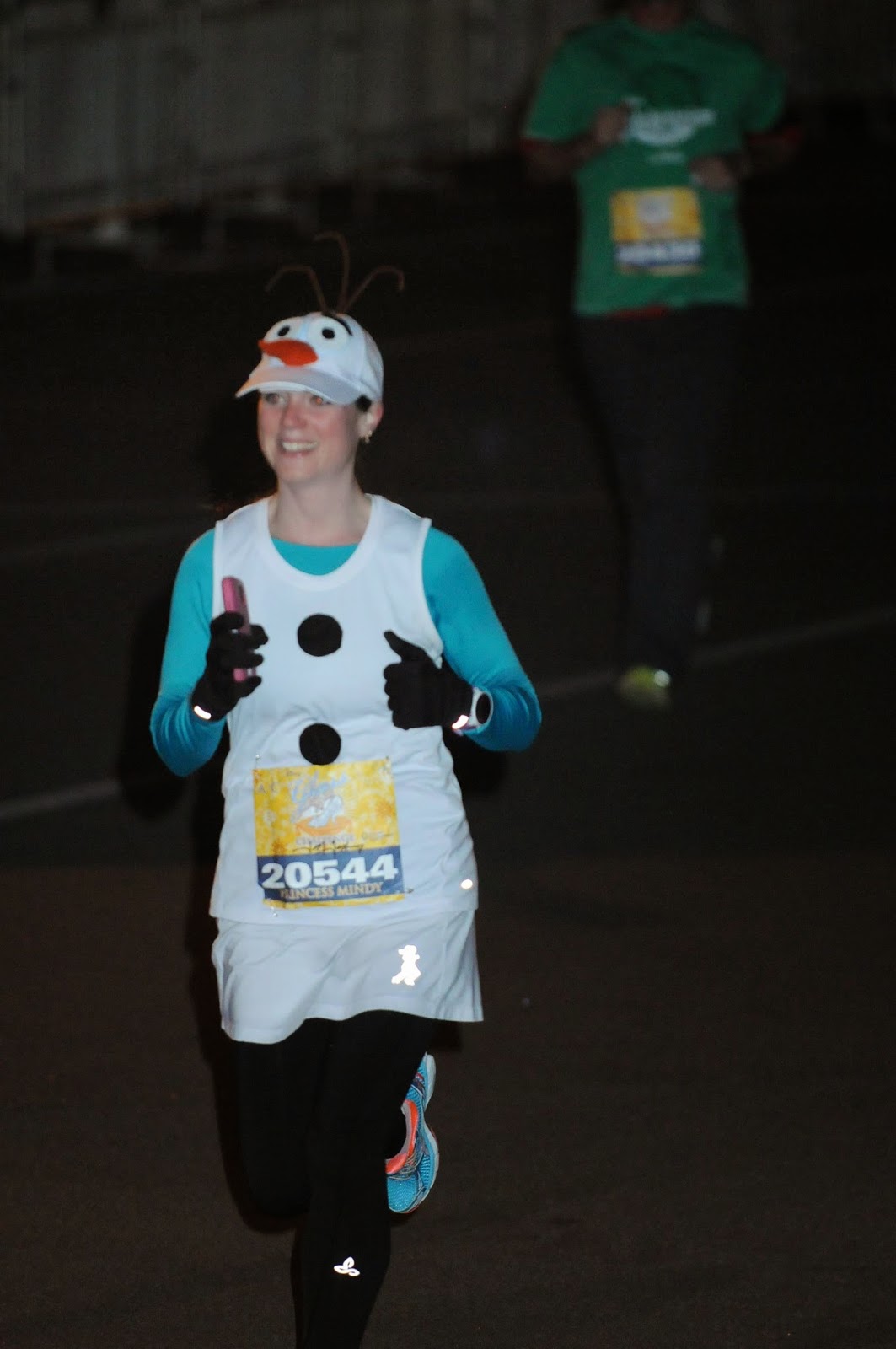 There's nothing like finishing a race in Disney World!!! 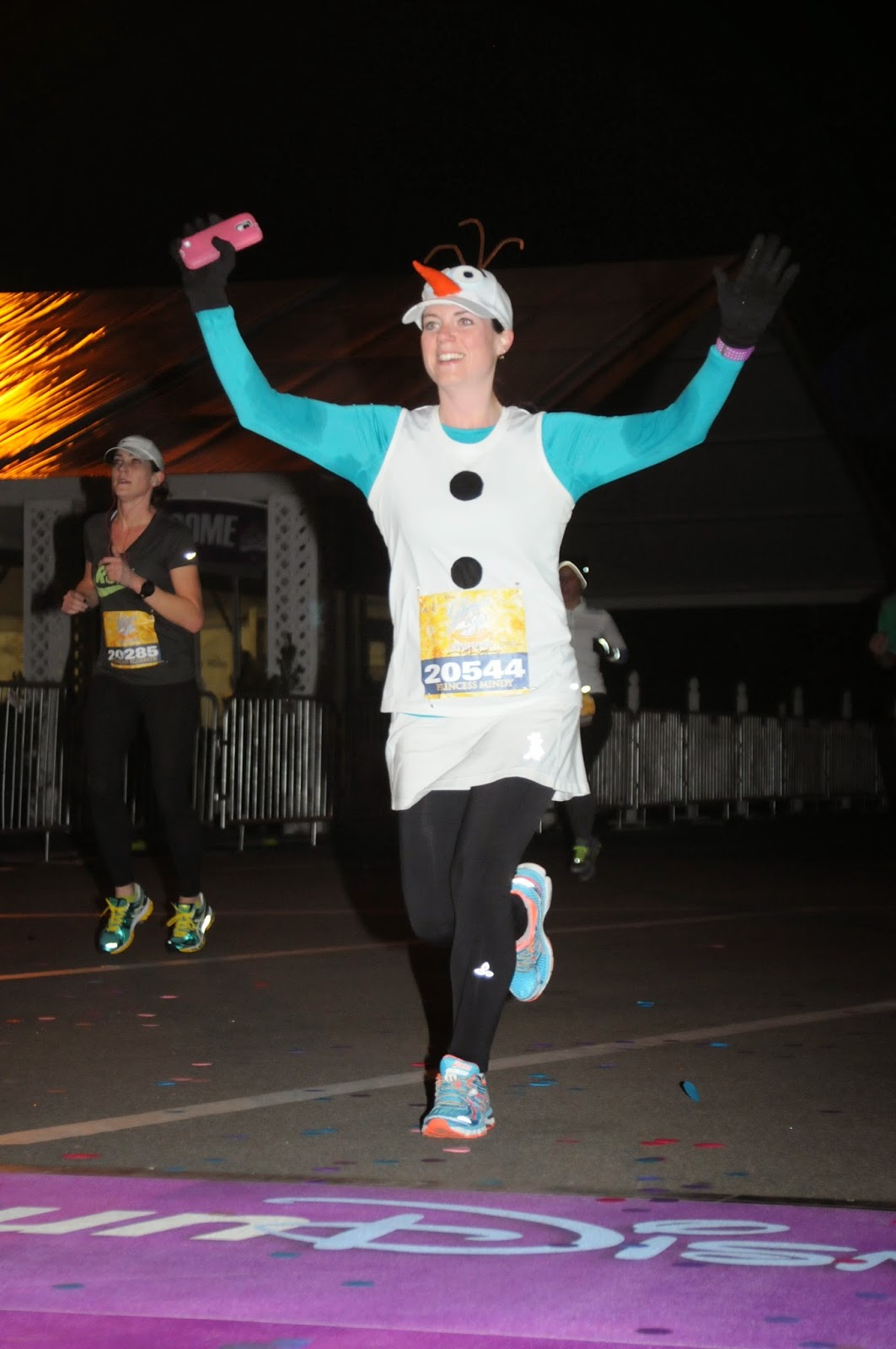 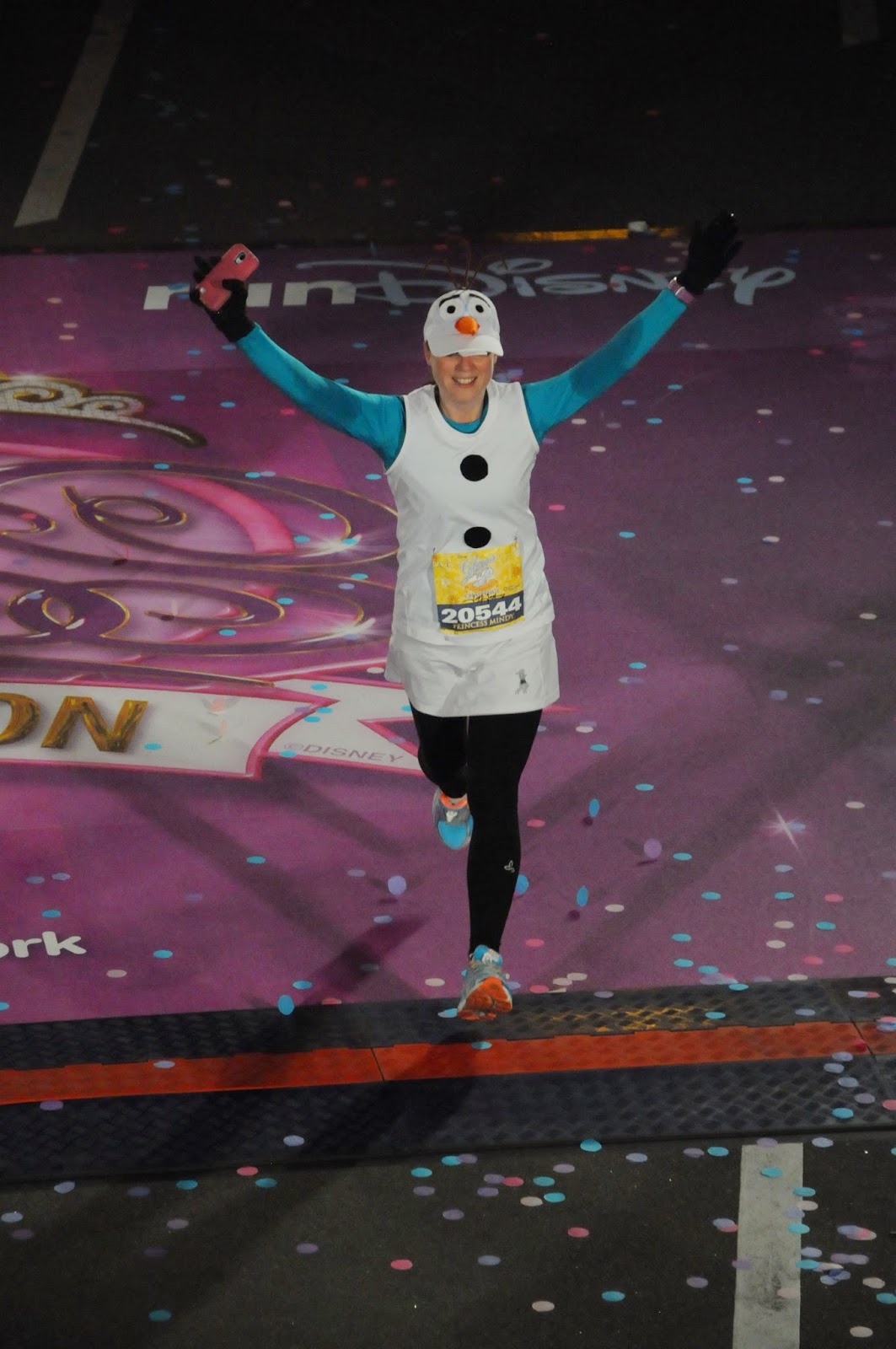 My official time was 59:40! I was so not expecting that good of a time! I stopped for every single character I saw. I must have been running pretty fast in between pictures. I was very proud of my first race of the Glass Slipper Challenge! 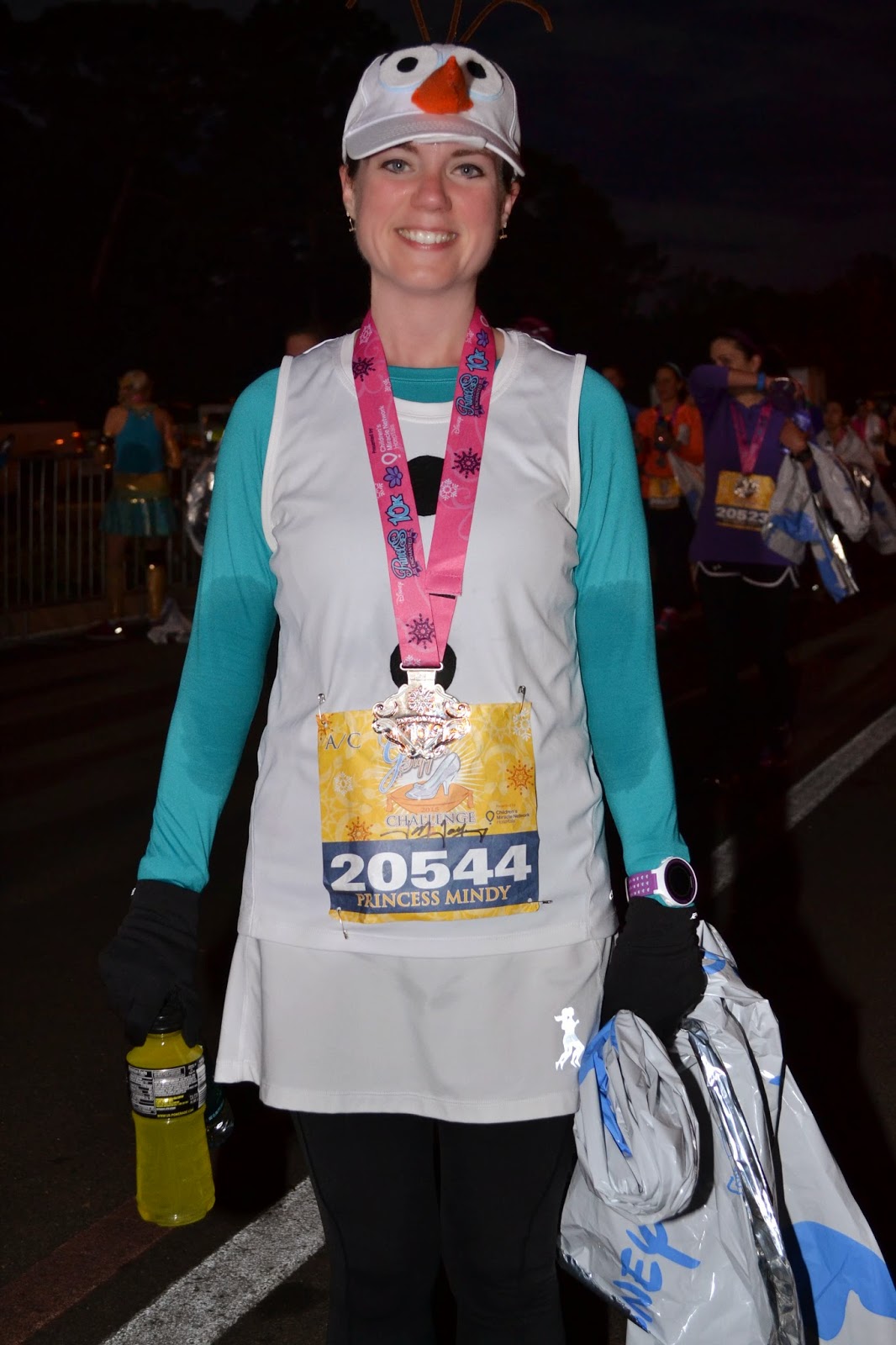 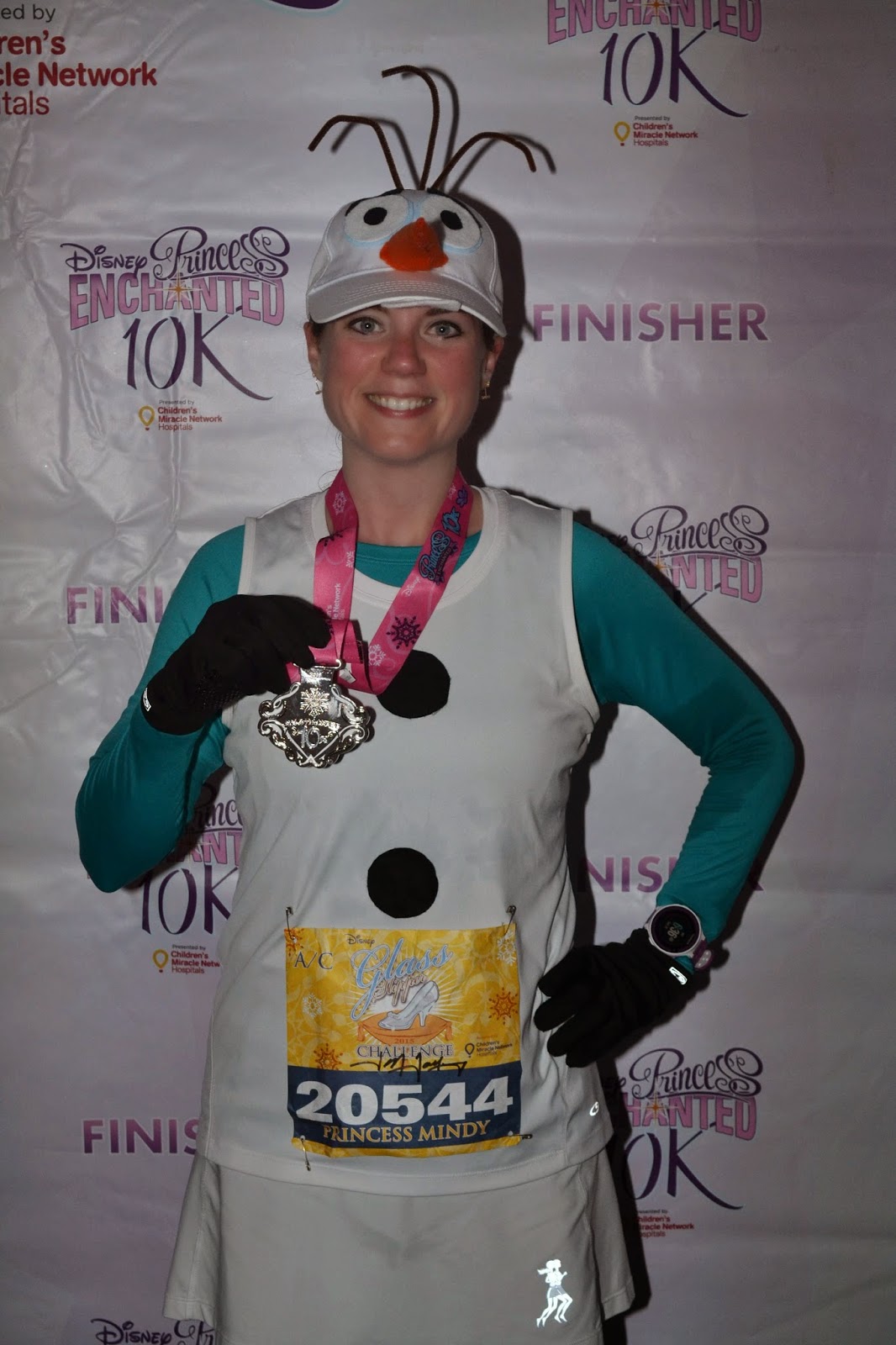 Some of the joys of being in one of the first corrals for a runDisney race...there are hardly any lines for characters! I think I waited in a line of 2 people at the most this entire race. Some of the characters had no lines at all. It was so wonderful!

And at the end of the race....there were hardly any lines at all for the princesses that were at the finish line. In years past I would wait in one huge line for one character. This time...I got to take pictures with 3 princesses because the lines were so short! 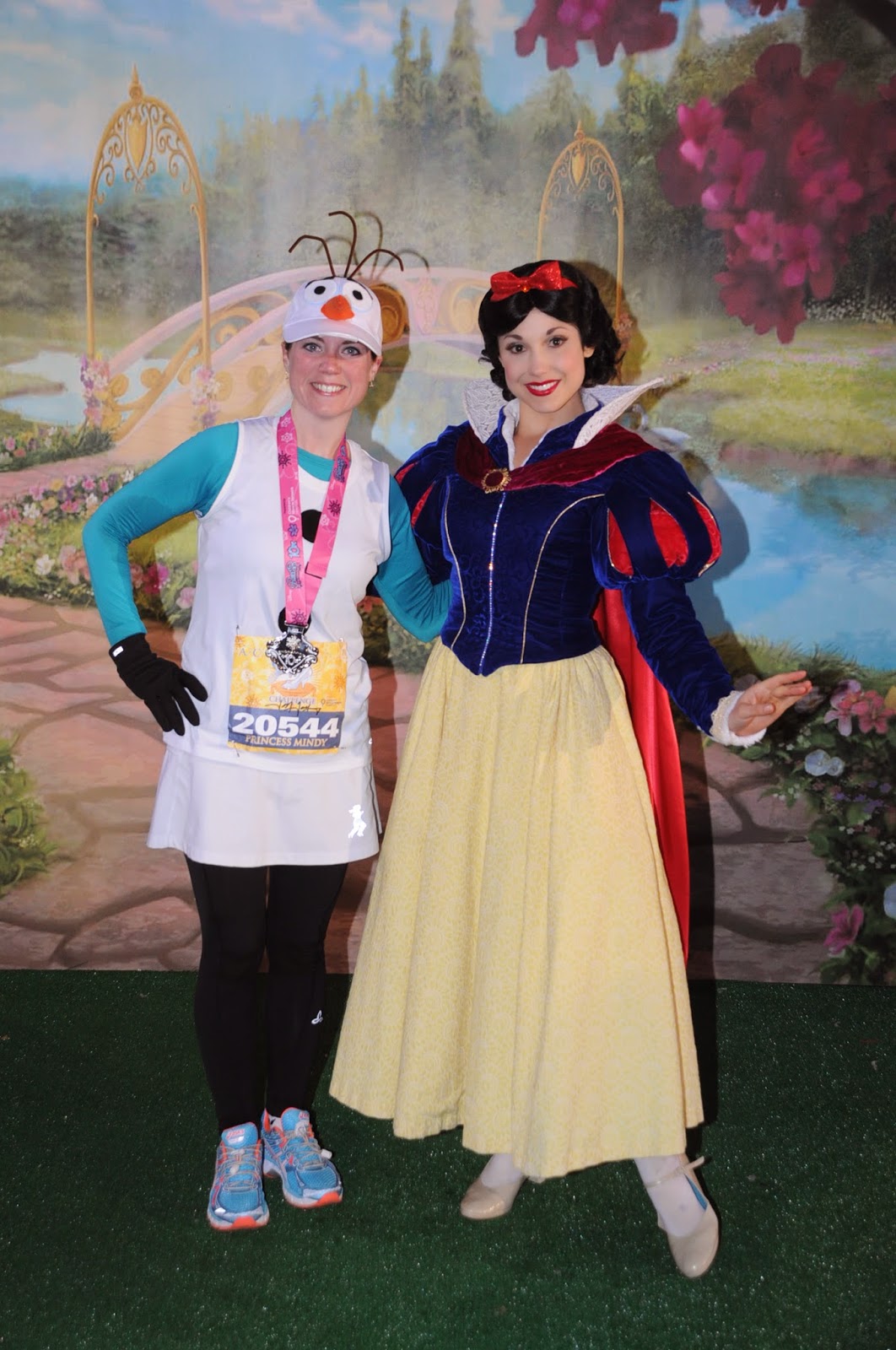 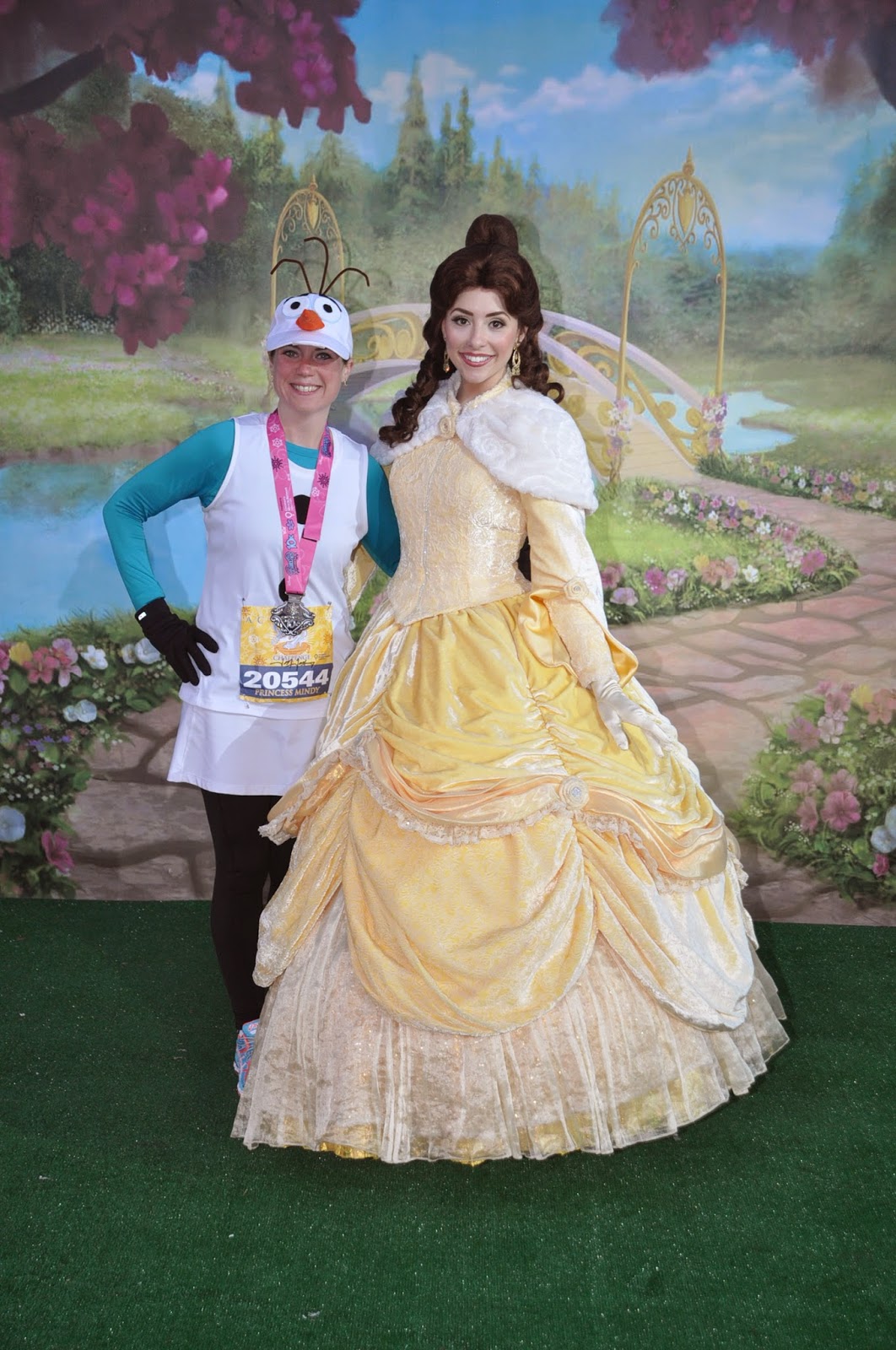 Cinderella! I just LOVE this picture of me and Cinderella talking! She was soooo nice and asked me if I preferred my running shoes over my glass slipper! ;-) 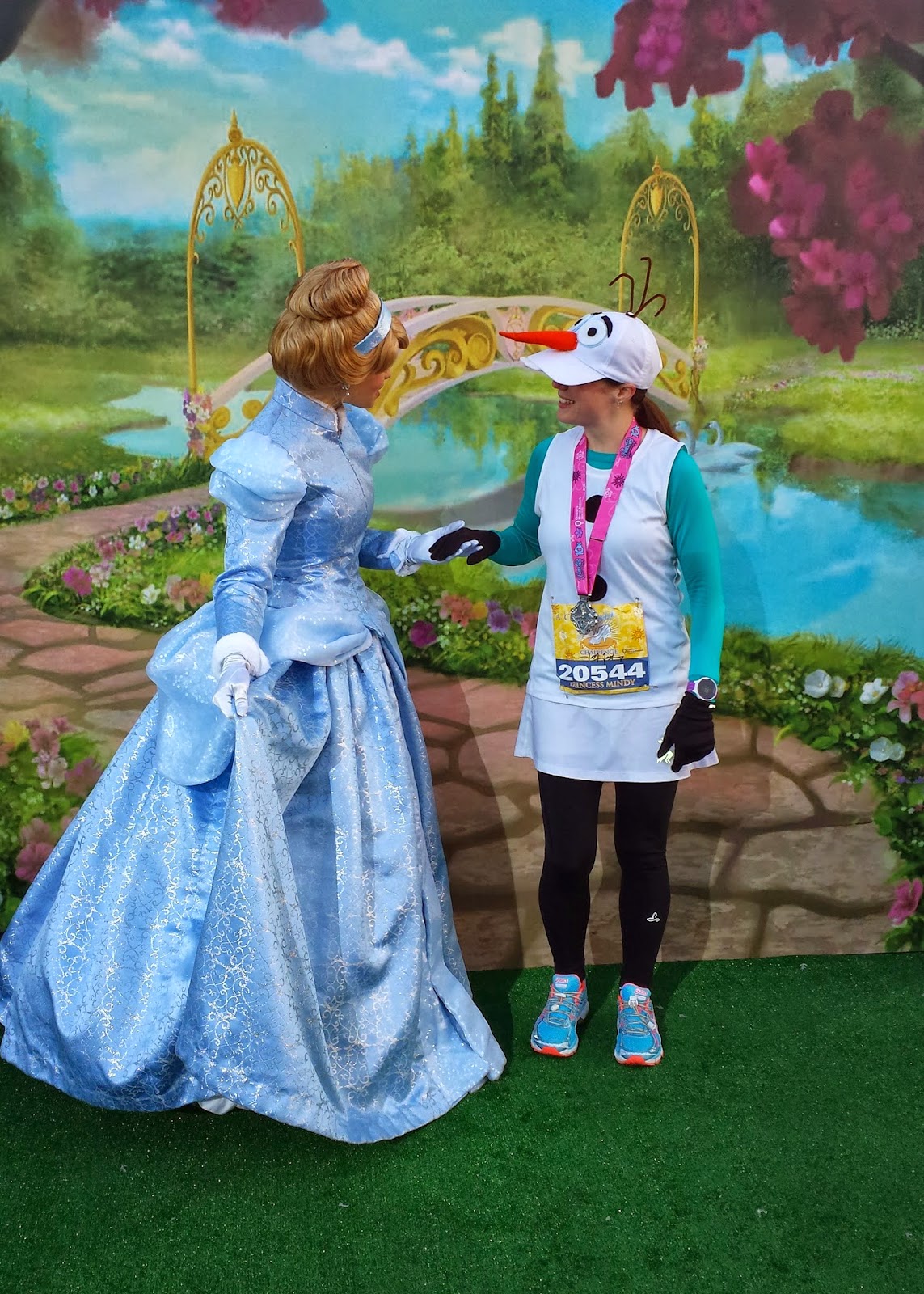 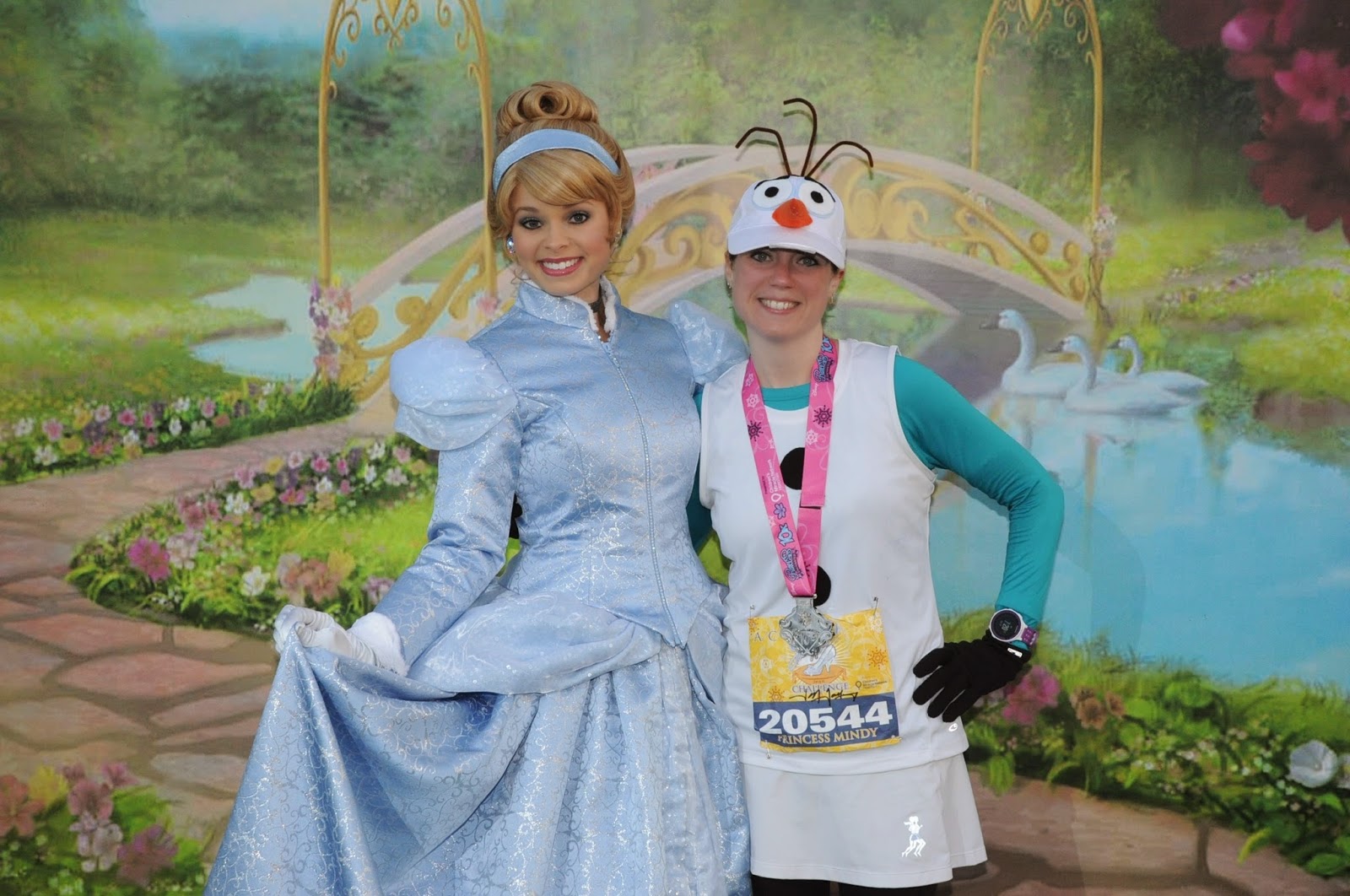 After taking pictures with the princesses, I saw Dani again! And with her was Kristin! I hadn't seen her in so long and it was fun getting to talk to her a bit! 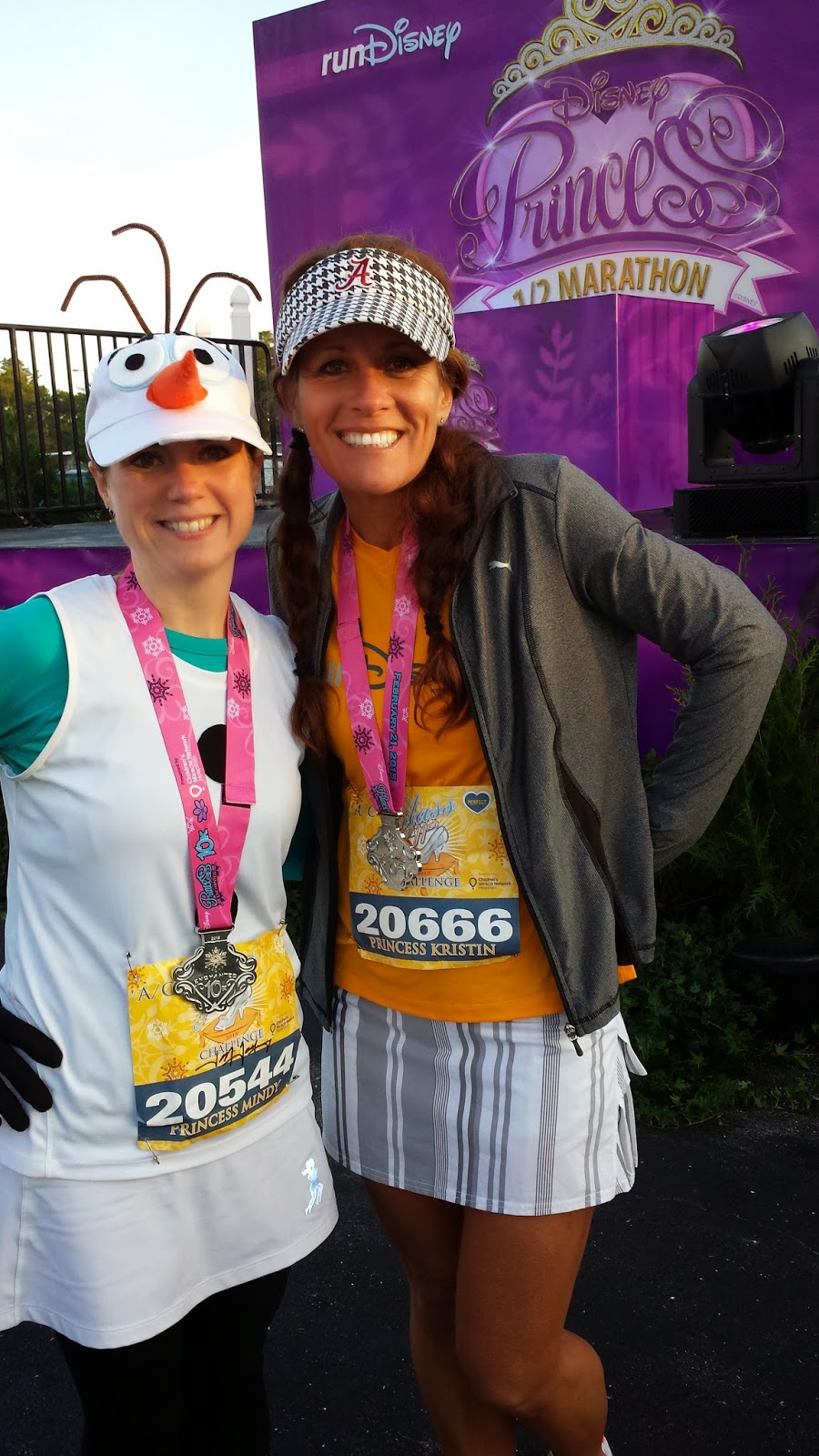 Then it was time to catch the bus back to the resort and meet up with my roomies! We had a day in Hollywood Studios planned!

Overall this race was a blast! I LOVE the 10K course so much! It's fun getting to run in the parts of Epcot that are part of the marathon course. Only during the marathon this part is at the end and you are so tired it's hard to enjoy it.

My favorite part was being in the A corral where everyone was running fast and the character lines were super short or non existent. I'm so thankful for my qualifying sub 2 half marathon time that put me in this corral!

Stay tuned tomorrow for my day in Hollywood Studios! :-)

QOTD: Did you run the Princess Enchanted 10K? What was the highlight of the race for you?