After running the Princess Enchanted 10K, I headed back to Port Orleans Riverside to shower and see my roomies. We had plans to go to Hollywood Studios that day!

But first things first....I had just run a 10K and I was RUNGRY! So we grabbed a quick breakfast at the resort...the bounty platter! Complete with my beloved Mickey waffle, bacon, sausage, eggs, potatoes, and a biscuit! DELICIOUS!!! 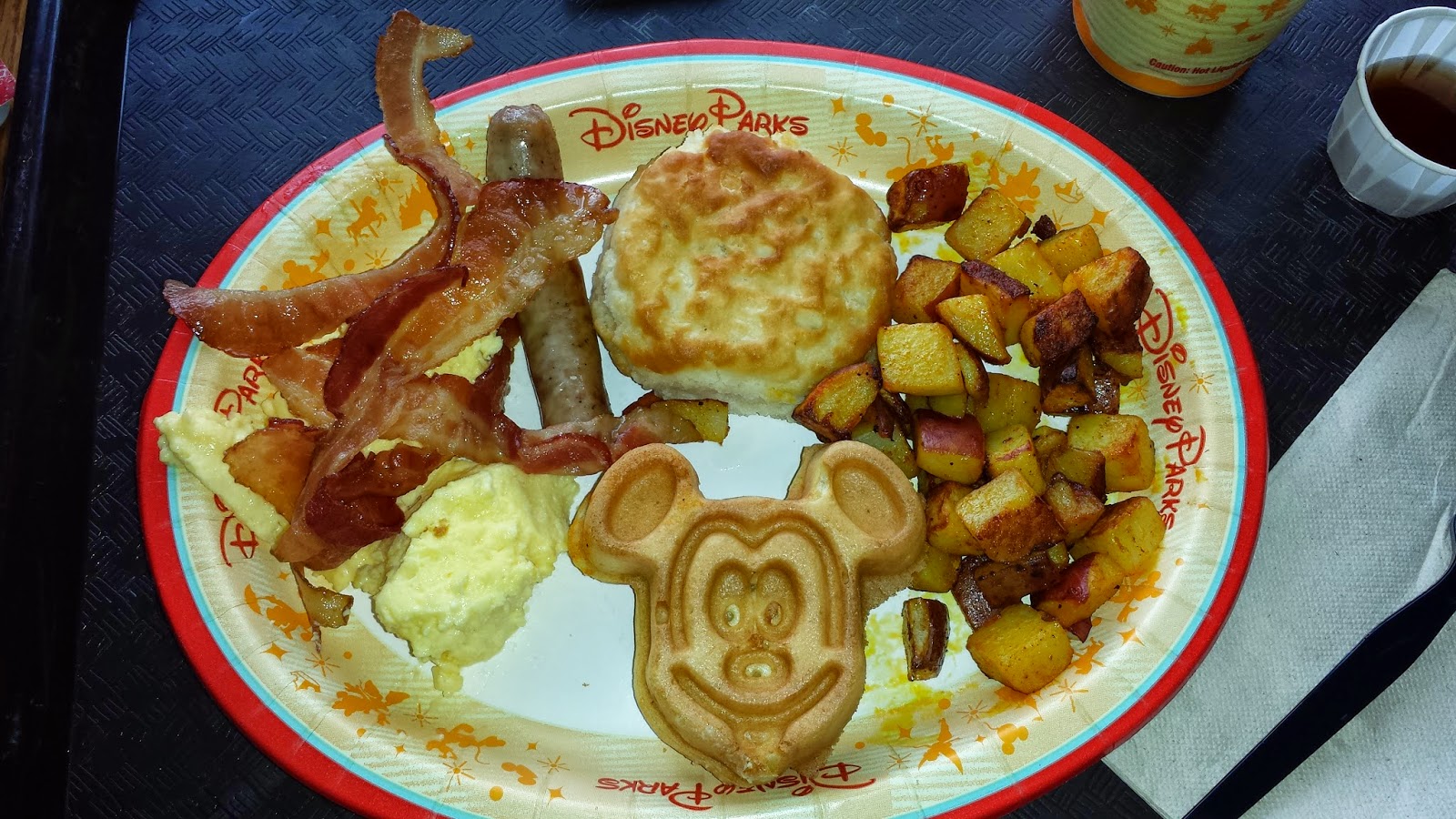 Since Susanne got there late the night before she hadn't gone to the expo to get her bib yet. So she and Sandi headed to the expo while me and Brooke caught the Disney transportation to Hollywood Studios.

The first thing I noticed was Mickey's missing hat. It was such a sad sight. 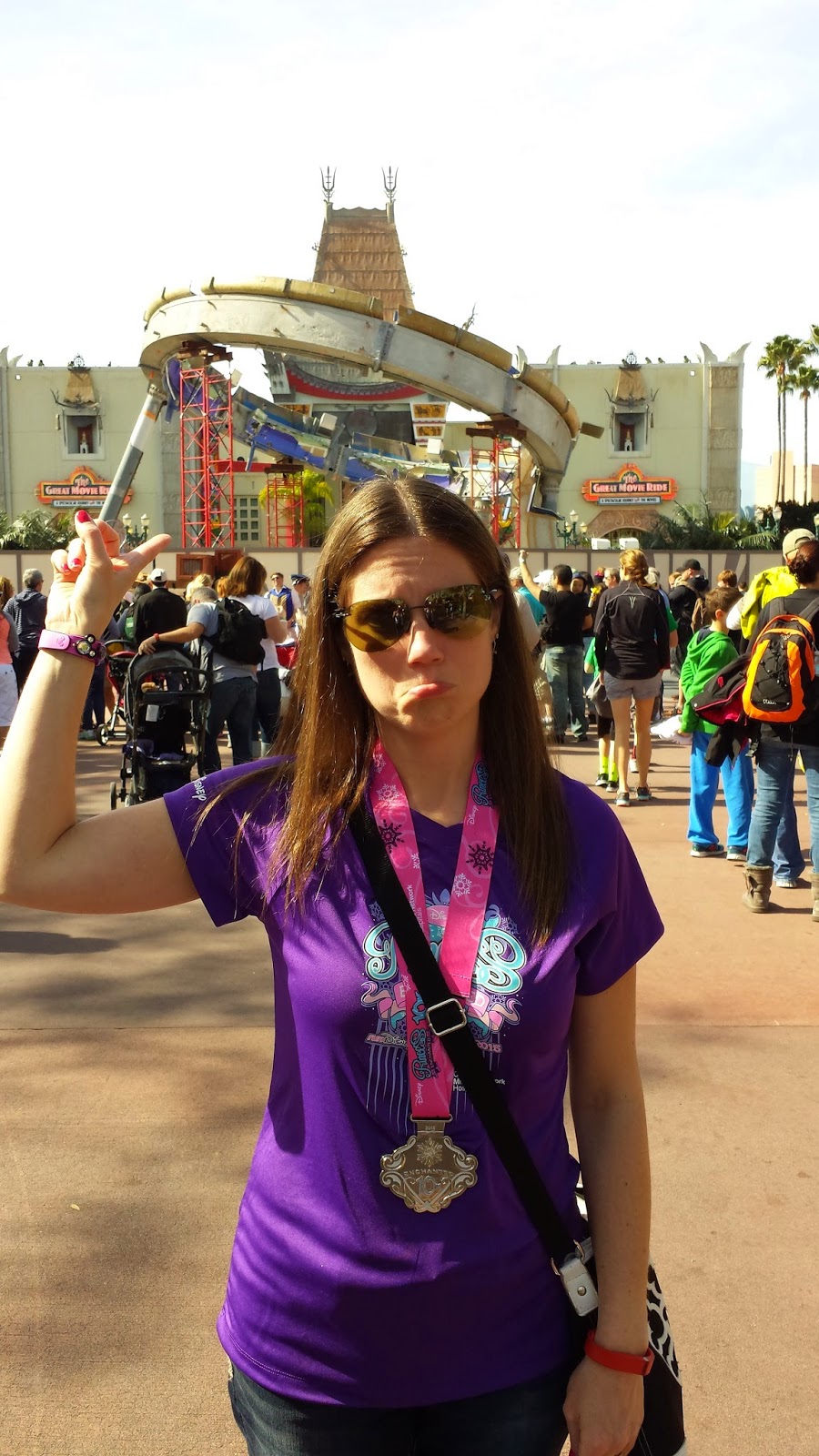 Supposedly this hat was put there for the 100 Years of Magic celebration that would have also been Walt's 100th birthday. It was never meant to last the almost 14 years that it did. Basically, it wasn't structurally sound any more and that is one of the main reasons it had to come down. (Thanks to Sandi's niece who is a cast member at Disney and gave me this information)

Although it was sad...it was nothing a little Starbucks coffee couldn't fix! I am so stoked Starbucks is now in Disney World! And noticing my medal...this is what was written on my coffee! LOVE it! 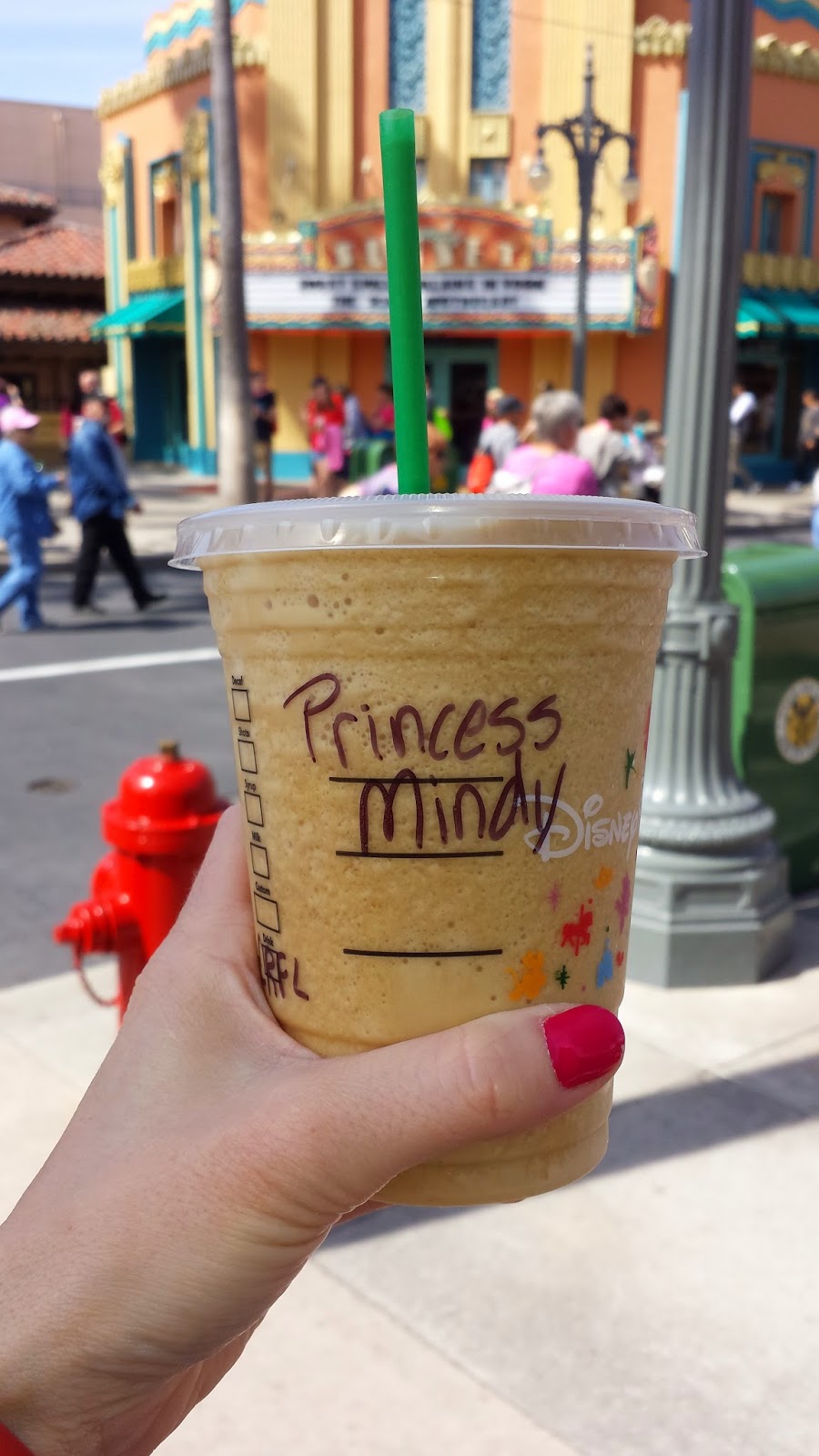 Don't mind me....I'm just enjoying some coffee and showing off some bling in front of the Tower of Terror! ;-) 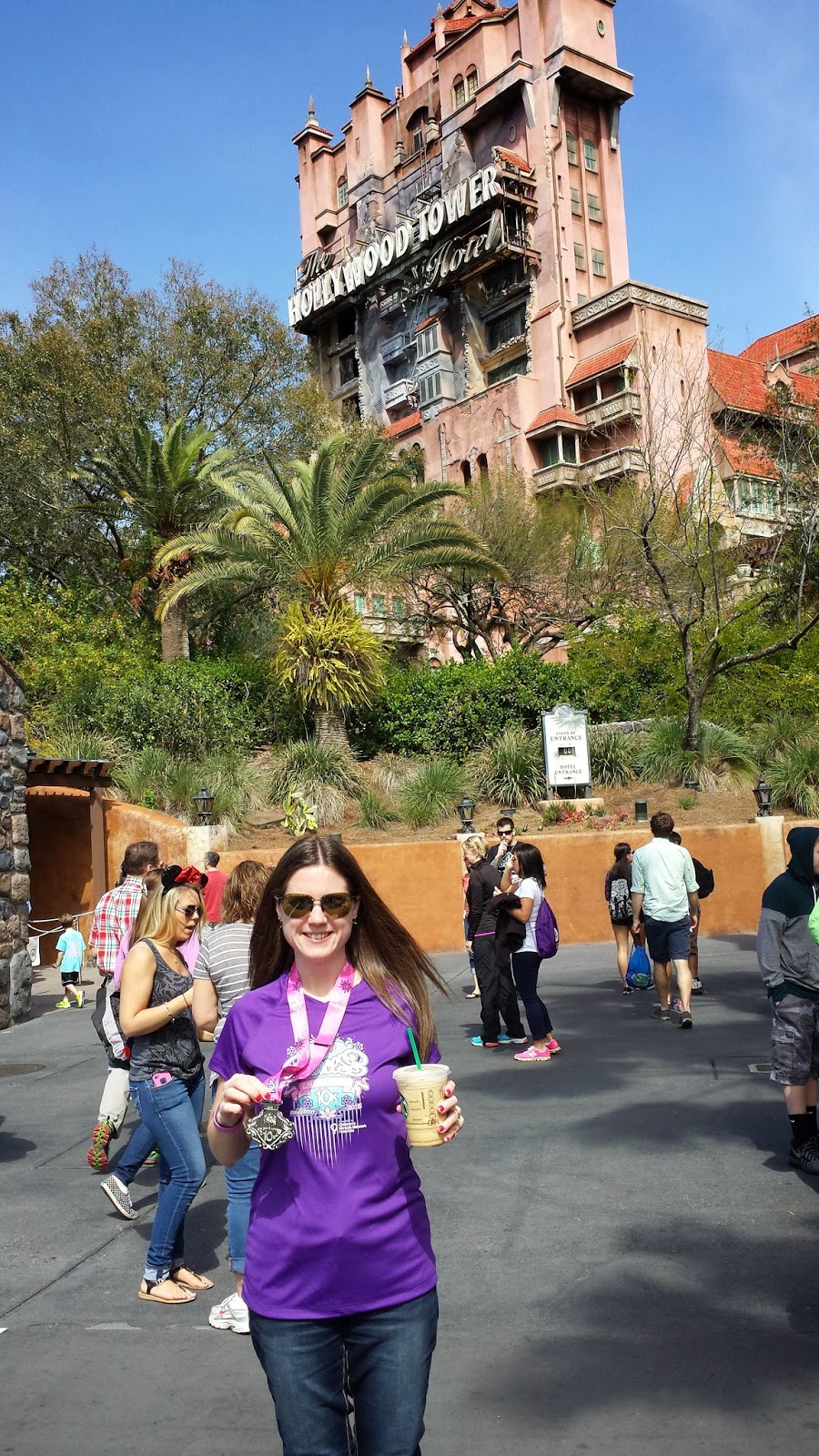 Brooke and I used our Fast Passes for Star Tours first thing. Then we did a few more rides and some walking around while waiting on Susanne and Sandi to get there. Guess who's carriage we ran into? Cinderella's from her new movie! Pretty awesome! 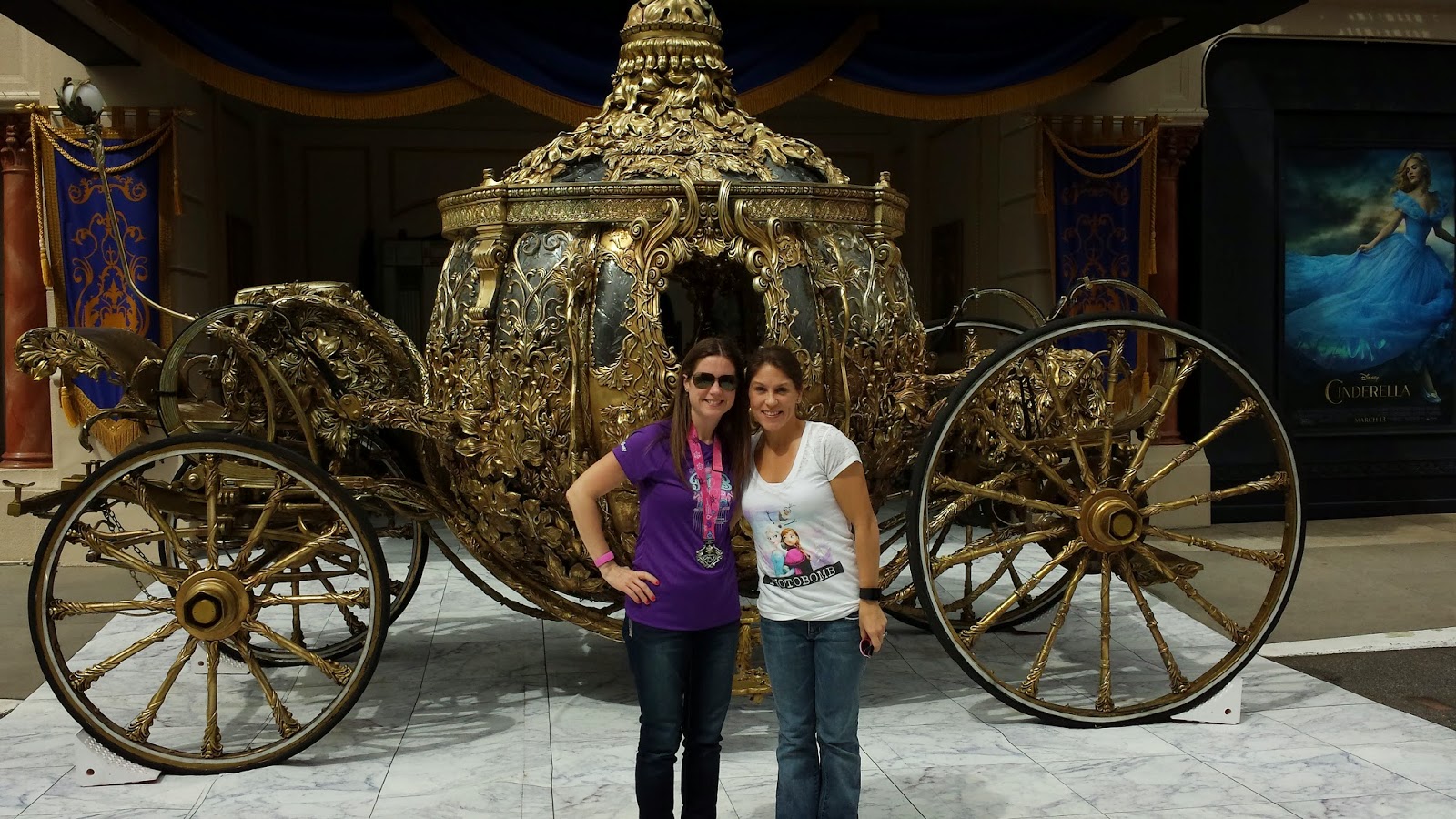 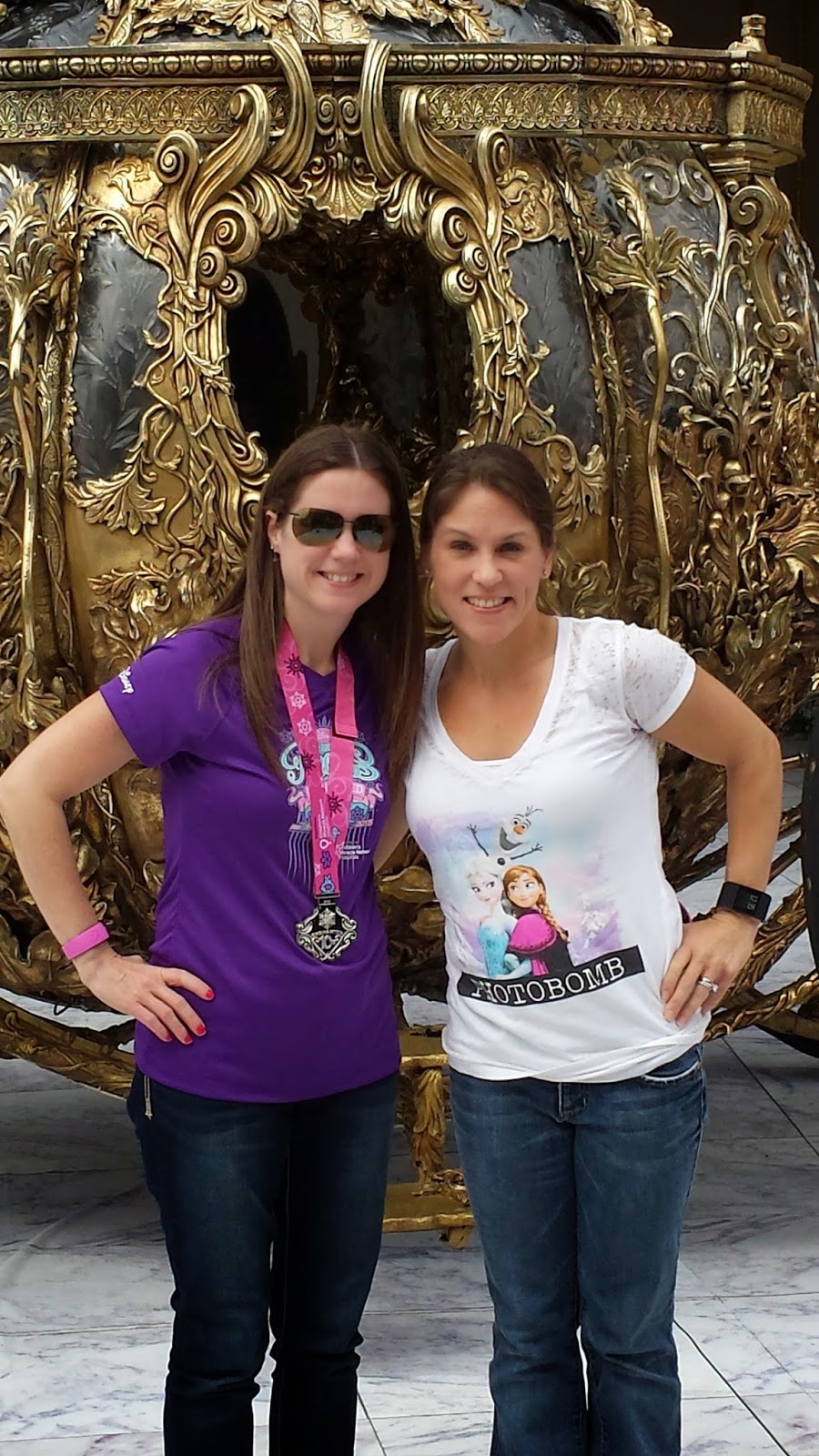 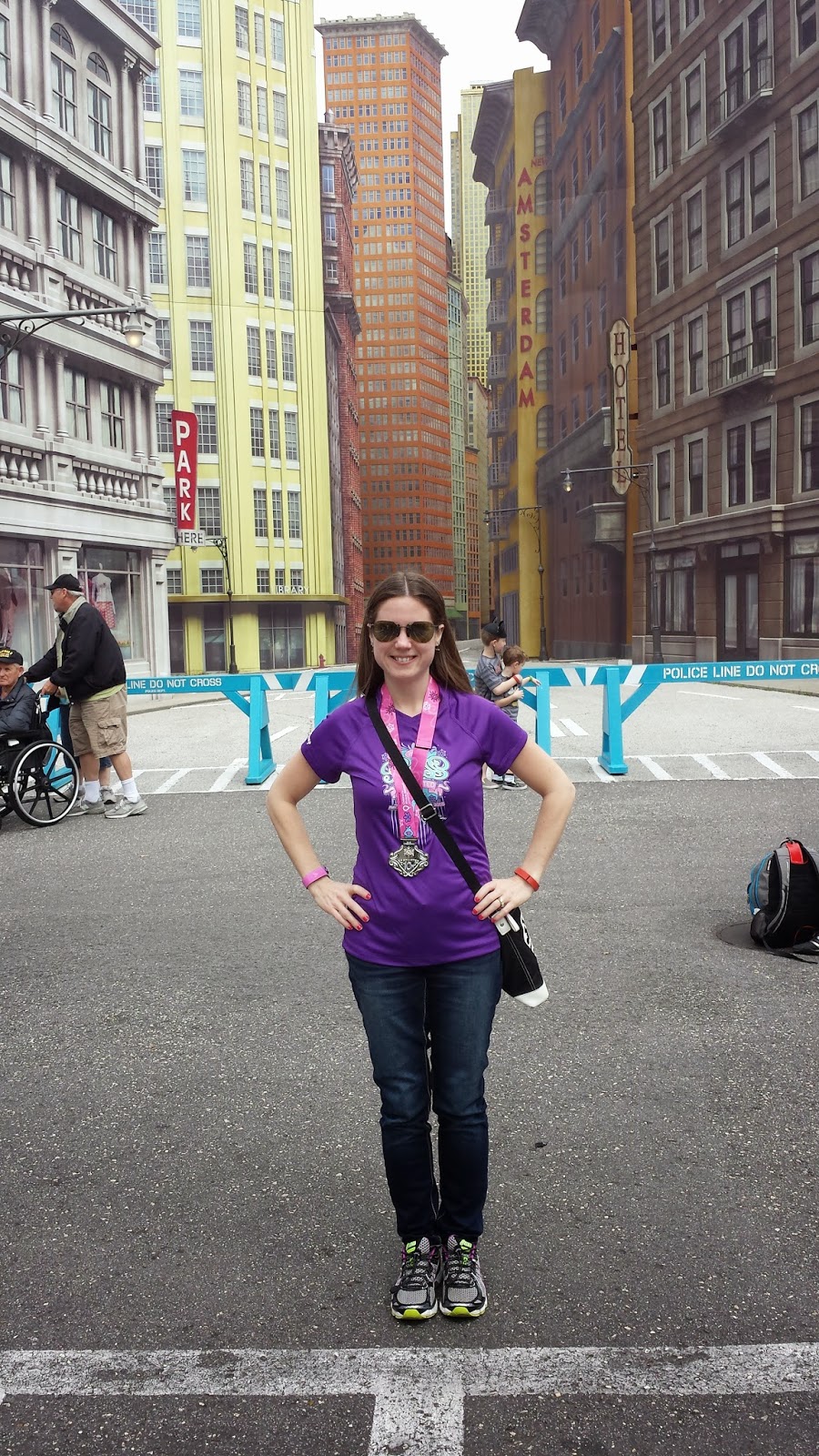 And one of my favorite cities...San Francisco! And that's where we met up with Susanne and Sandi! 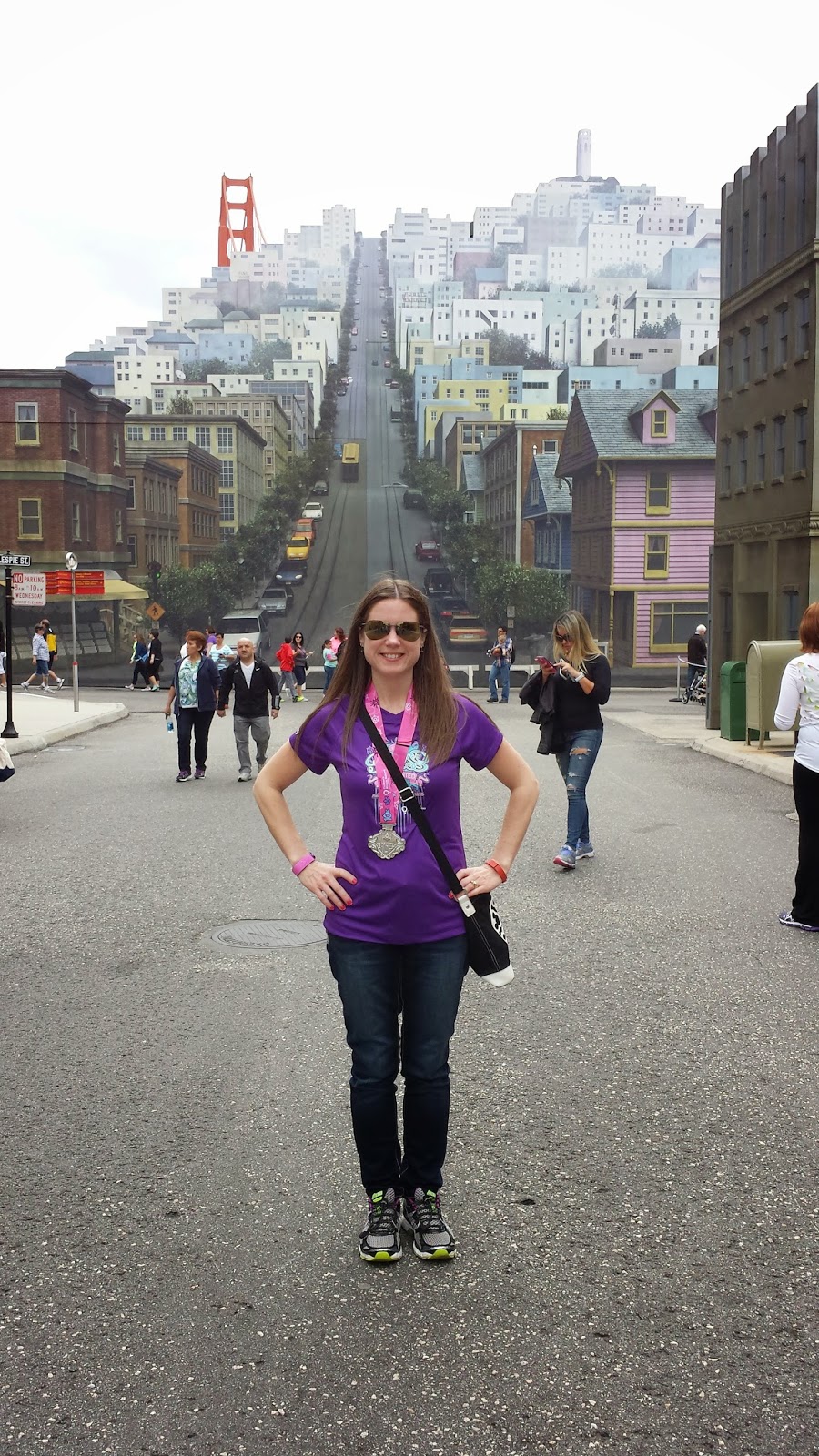 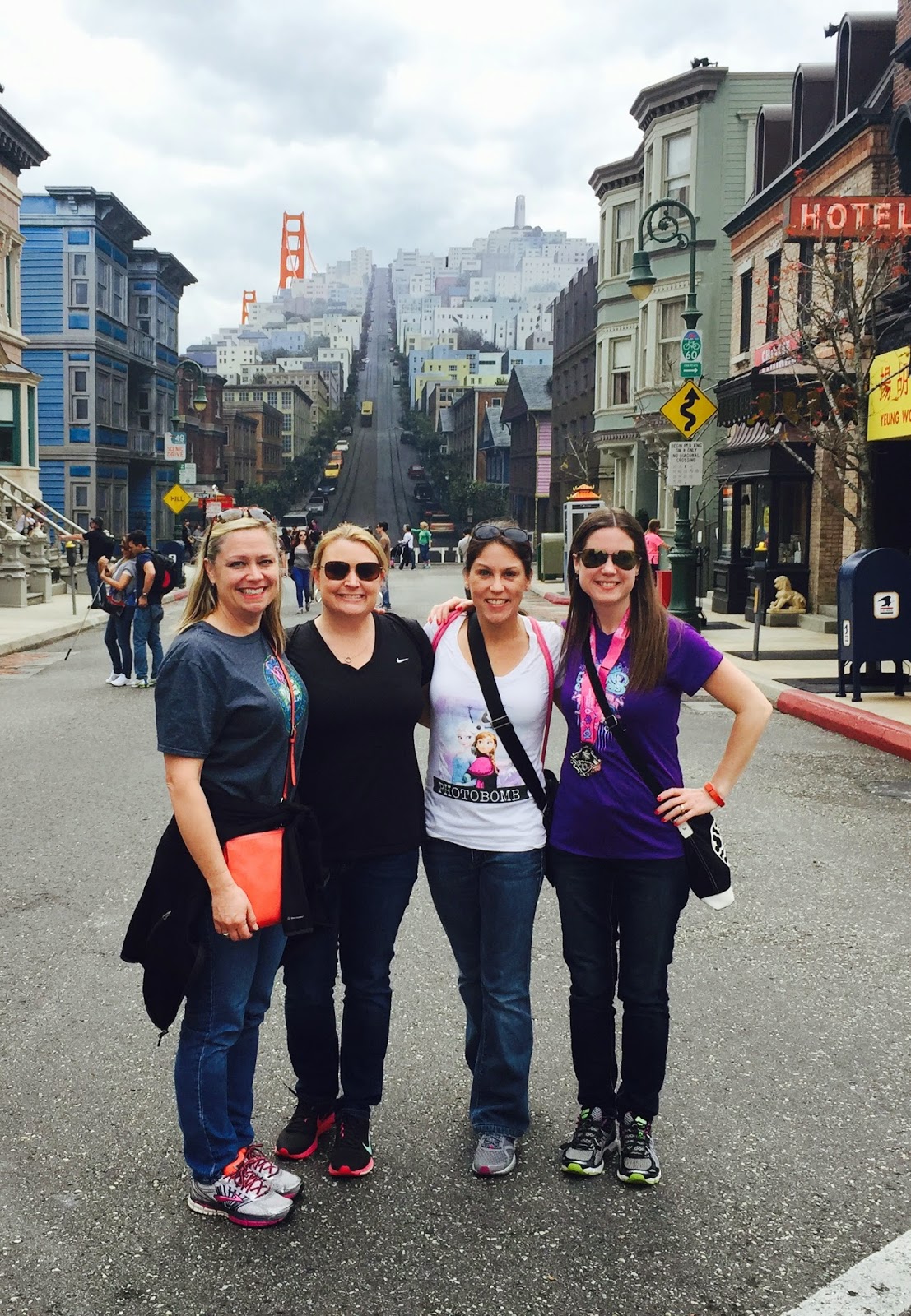 We headed to grab a quick lunch where we saw this cute little squirrel grabbing all the food he could! Unfortunately this was the only photo I got of him because a little boy kept scaring him off. But trust me when I say he was so cute! 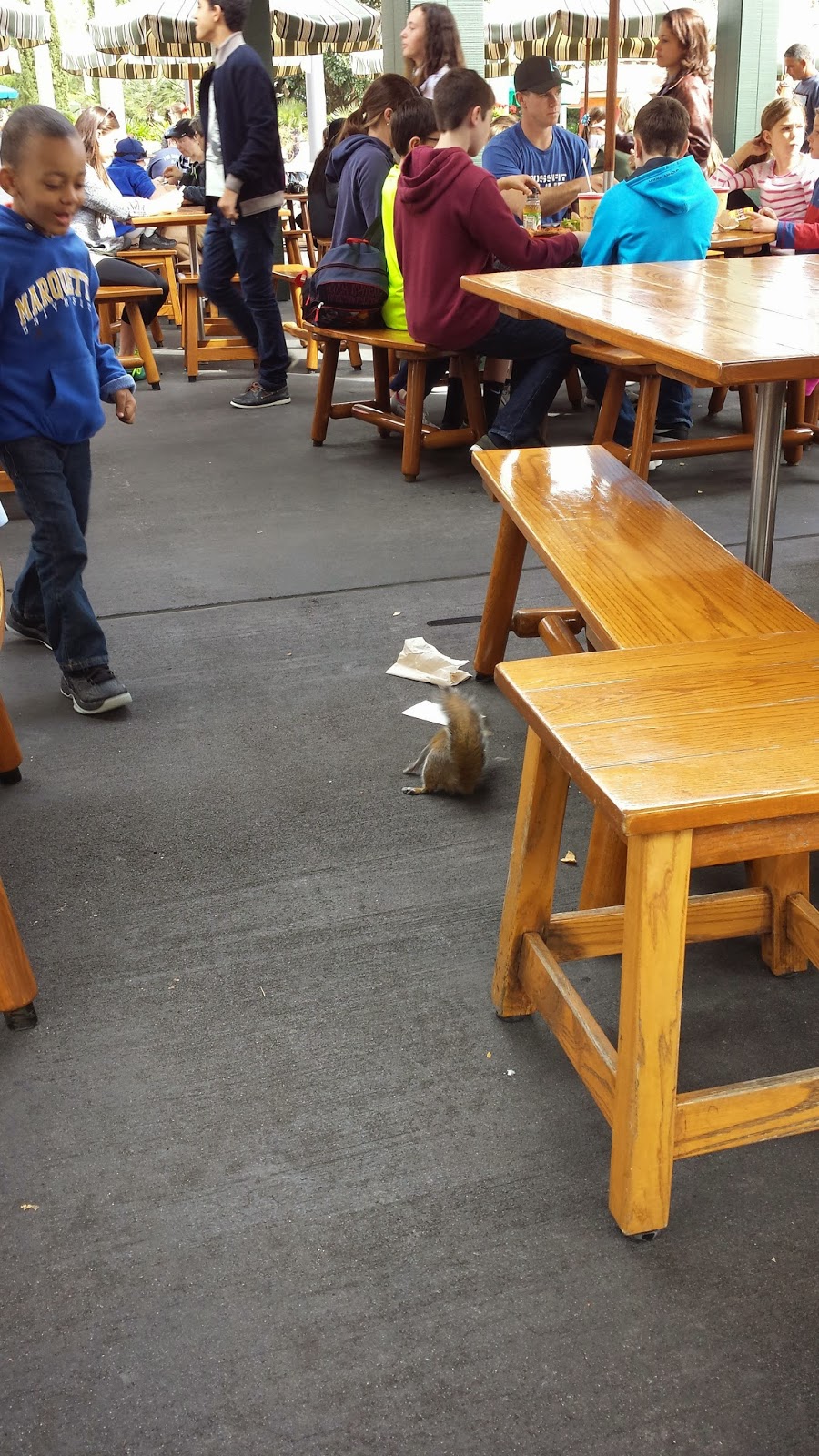 After lunch it was time to use our fast passes for the Tower of Terror! So. much. fun! I had more fun listening to my friend Susanne scream than anything lol! 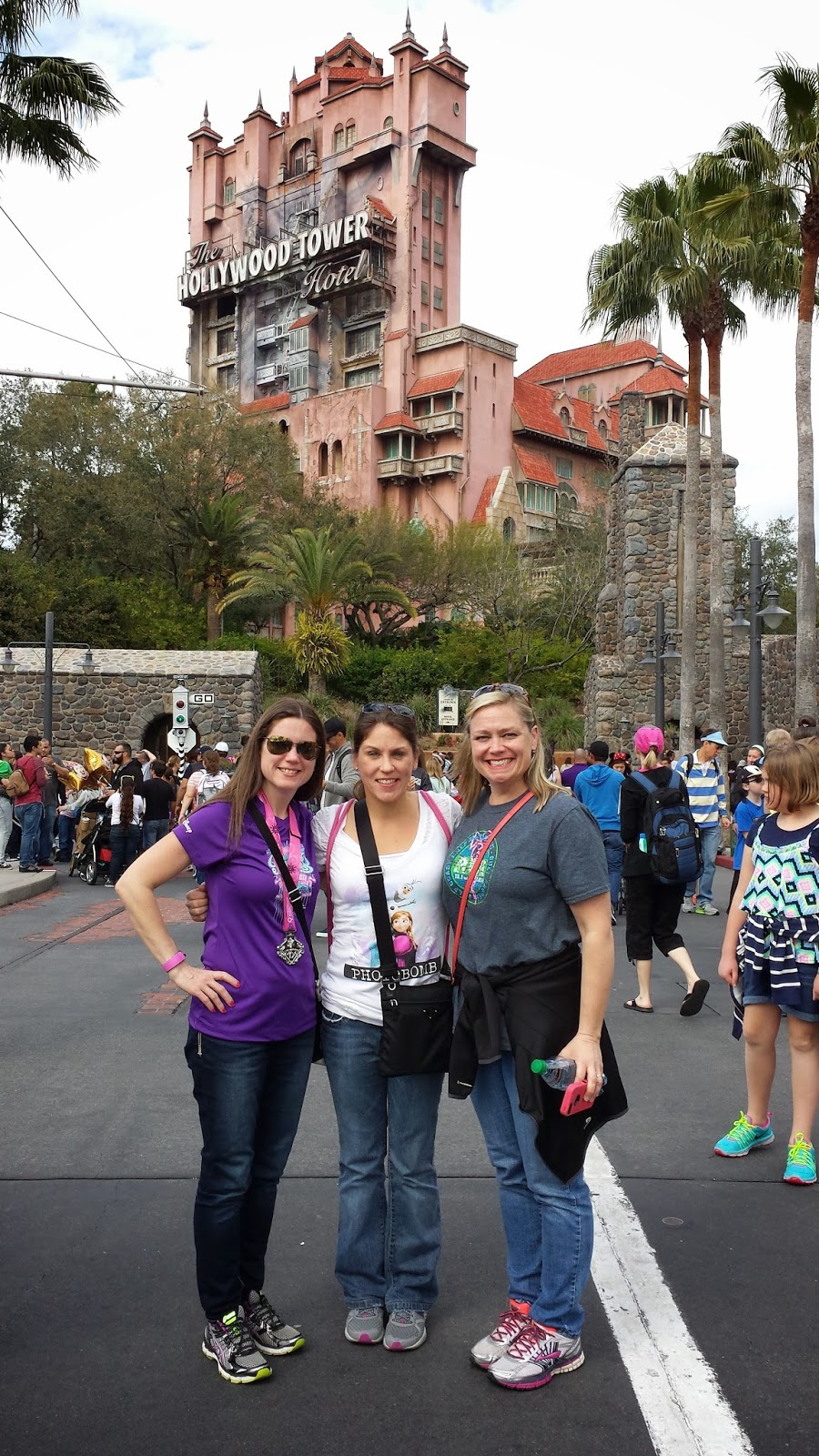 Next we headed towards the Toy Story ride. But we decided not to wait in that super long line. But we did get to take pics with one of the army guys! And we didn't even have to wait in line for it! 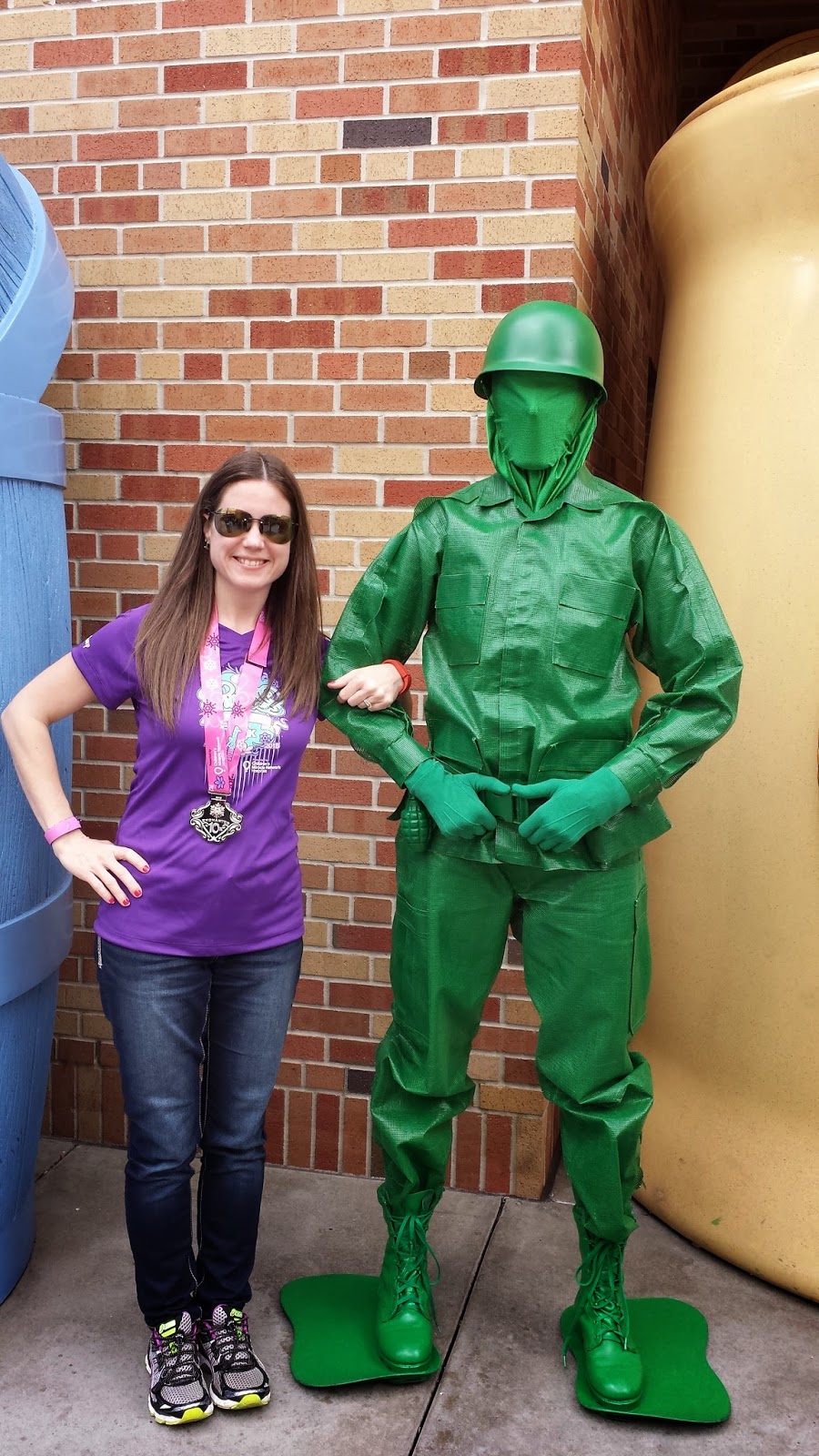 Our next fast pass was for the Rock 'n' Roller Coaster...my FAVORITE ride! But unfortunately it was having some issues and was closed down at the moment. We were told we could come back later and they would honor our fast passes. No problem...we just went and watched the Beauty and the Beast show instead! :-)

After a few more rides and attractions Brooke and I headed back to Rock 'n' Roller Coaster and were in luck! It was open! And it was just as fun as always!

After the ride I got a text from Dani! She met me in front of the guitar! I was feeling so lucky to see her twice in one day! :-) Sandi reads her blog and really wanted to meet her so Dani walked around with us for a bit while we went in search of Sandi and Susanne. 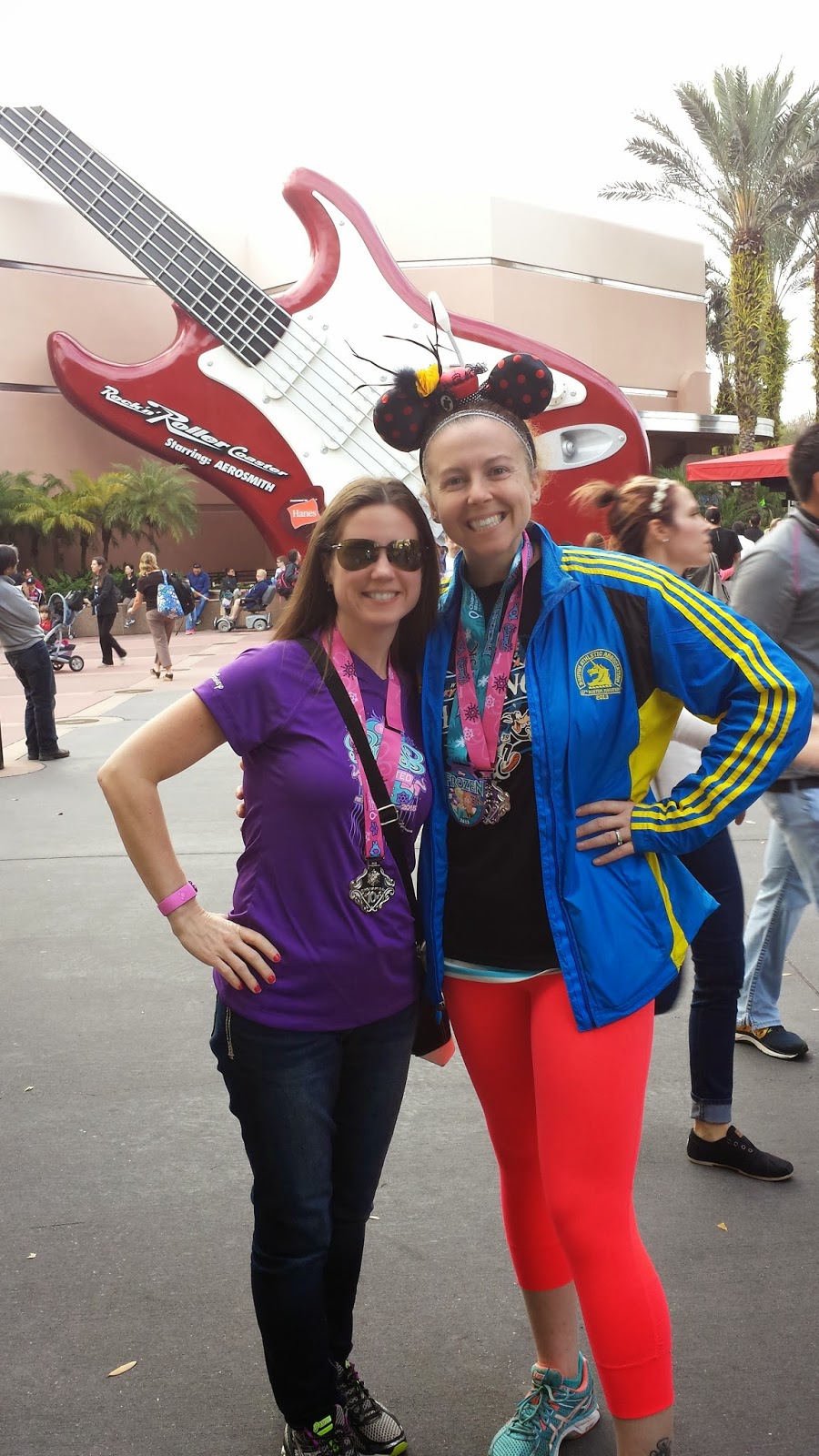 We found them in line to see Baymax from Big Hero 6! And of course we couldn't resist that photo opp! 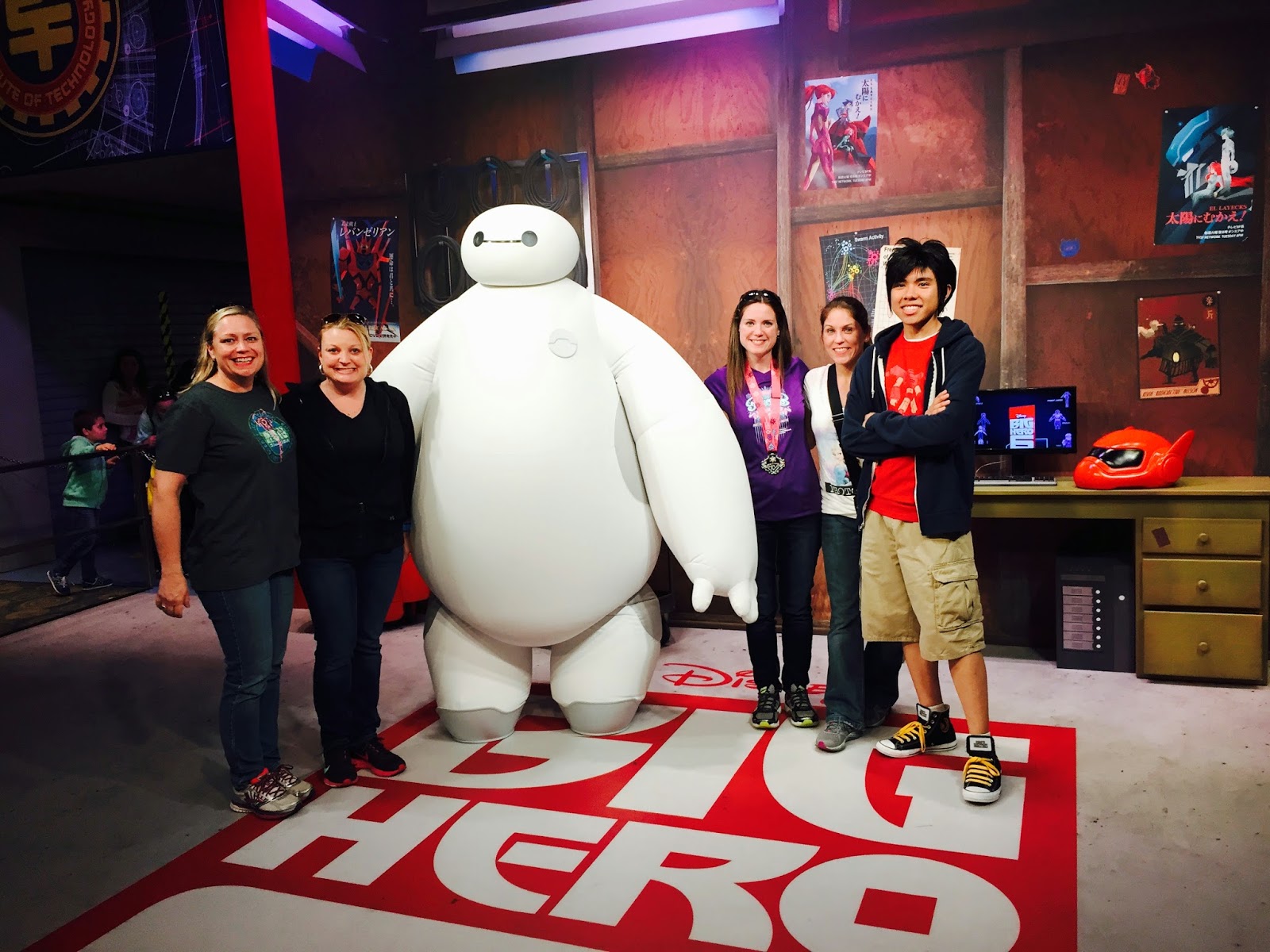 And since The Oscars were the next day....we got to take photos with and touch a real Oscar that would be given out the next night! So cool! And our pictures were hilarious! We had so much fun pretending we won an Oscar!!! 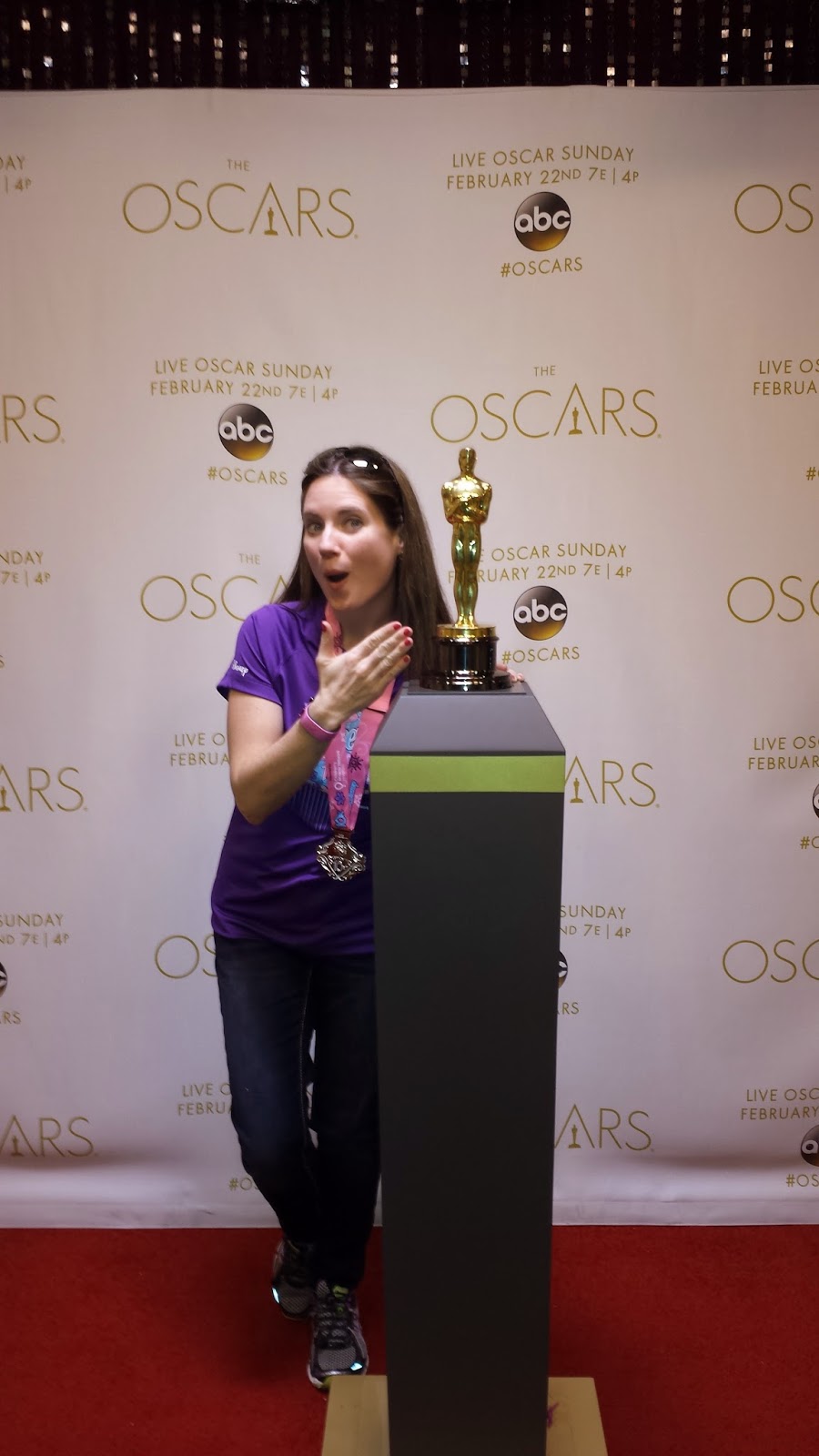 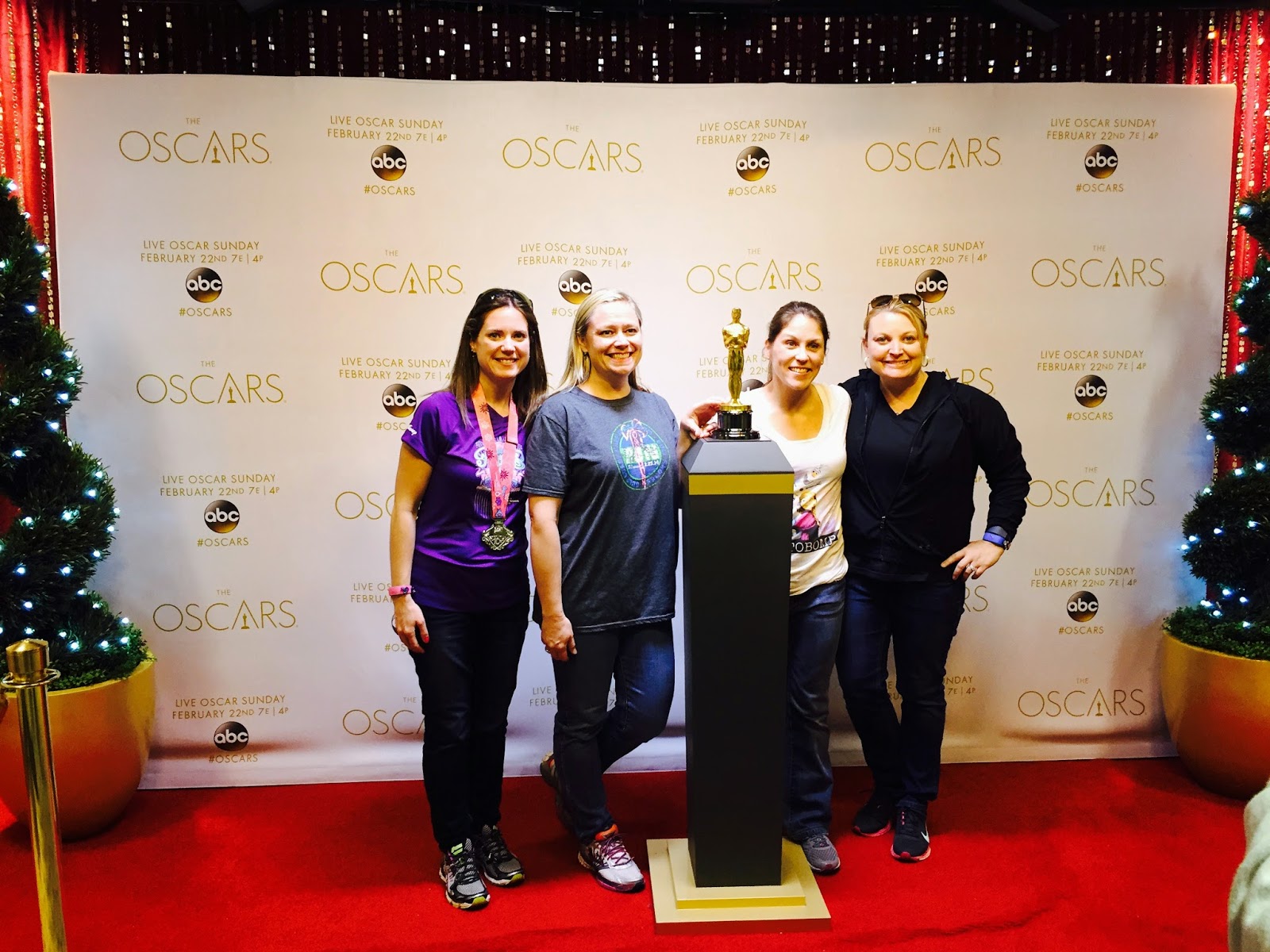 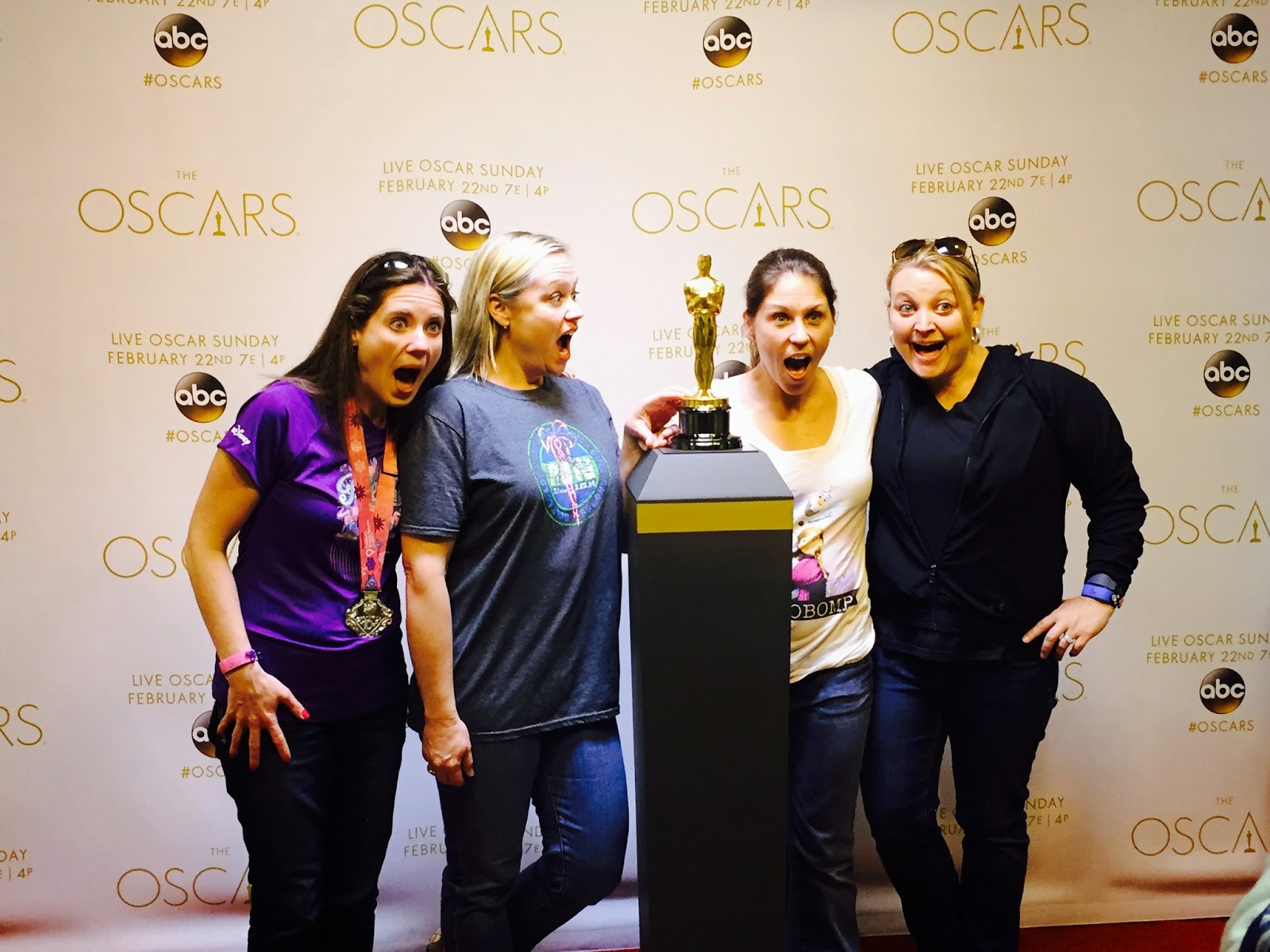 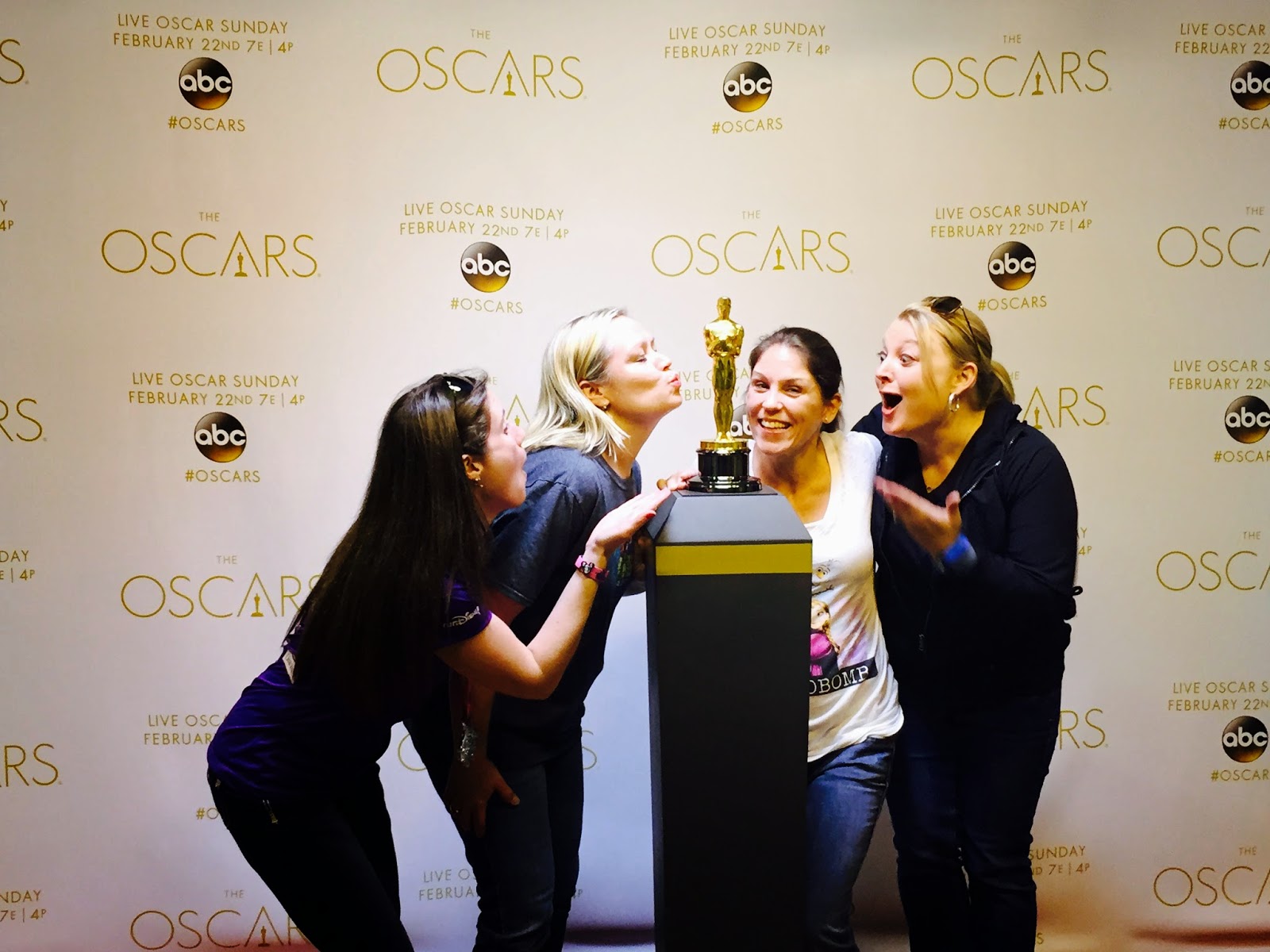 So much fun!!! After the Oscar, we went to ride the Great Big Movie Ride. I learned from Sandi's niece who is a cast member that in front of this ride was the only place where Audrey Hepburn's hand prints were. She only placed them at Disney because they asked her first. Later she refused to put them in Hollywood since they didn't ask her first. Interesting! 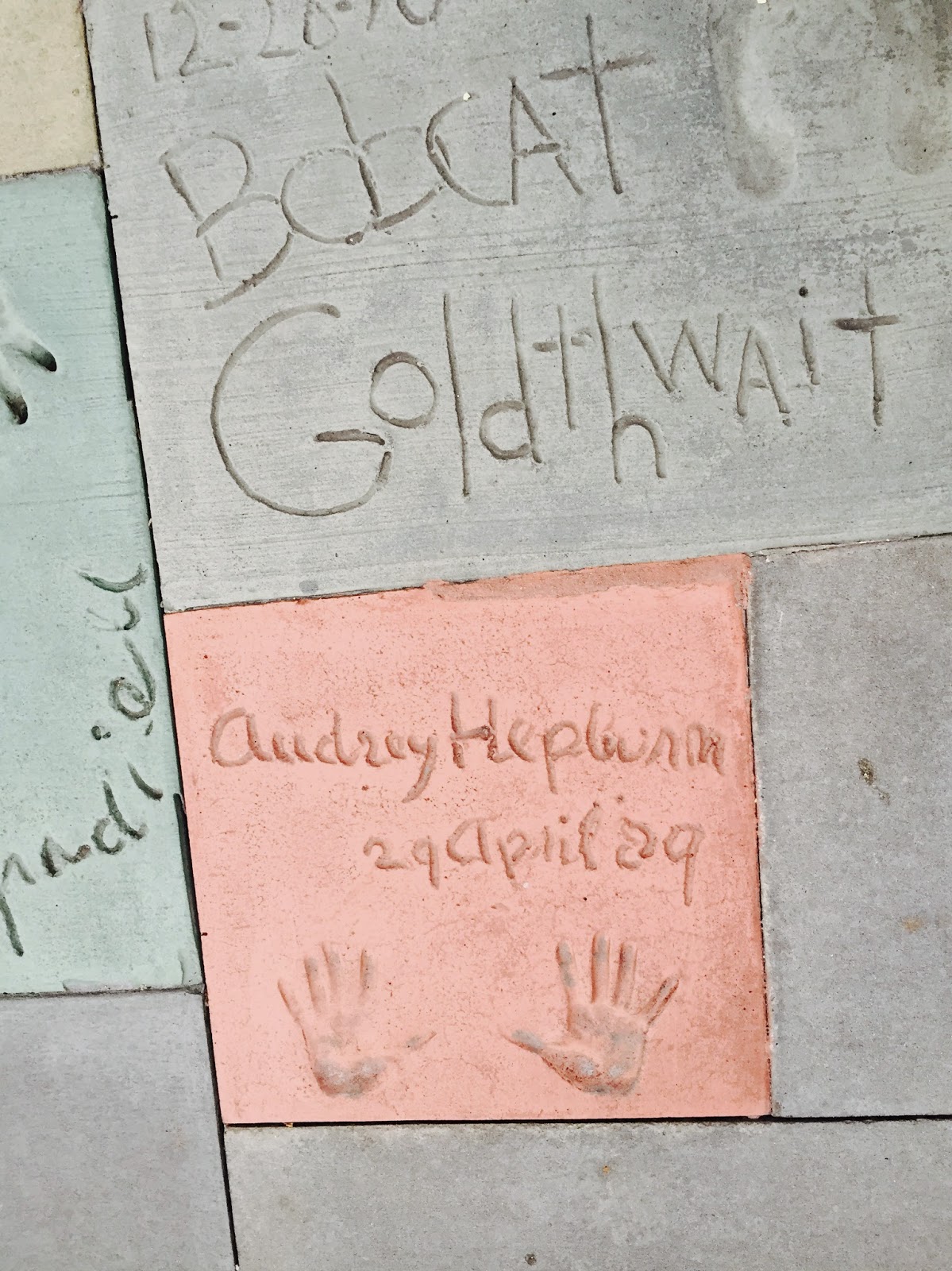 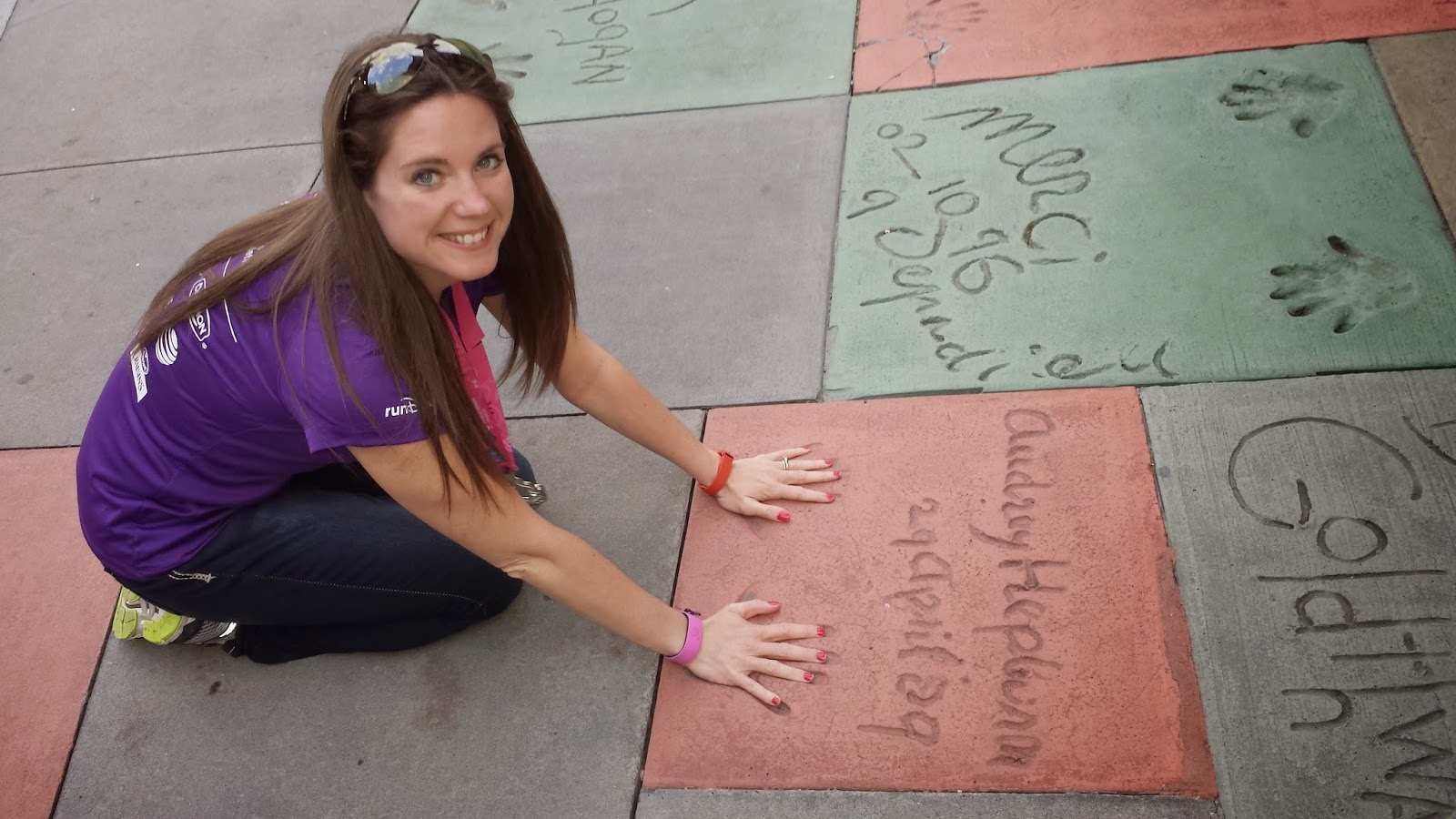 After the ride it was starting to get dark. We were hungry and knew we all had an early wake up call for the half marathon the next day. I wanted my pre-race traditional meal of pizza of course. But most of the restaurants at Hollywood Studios had closed. So we headed back to the resort for our pizza. And yes...it was very yummy! 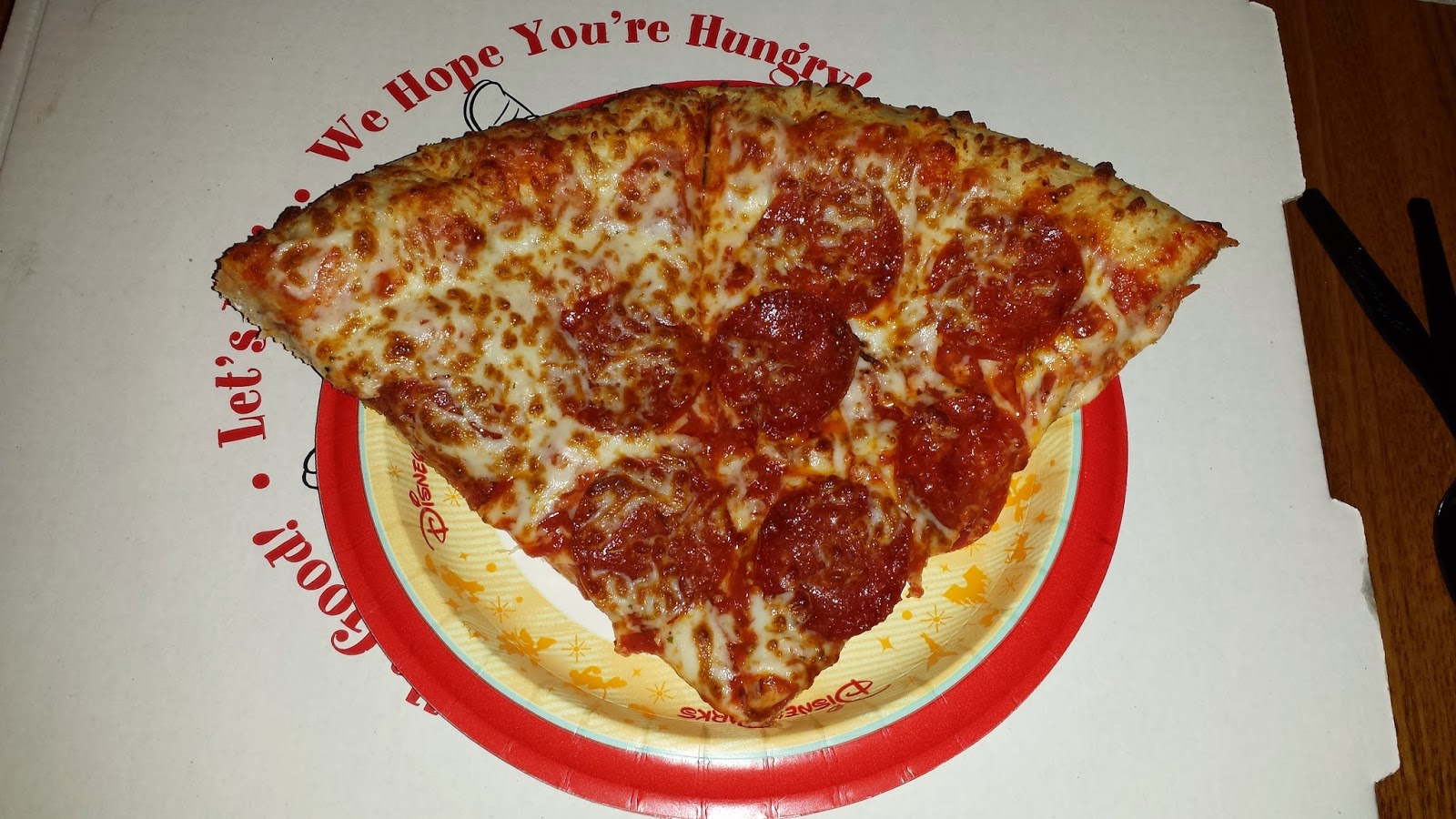 We headed back to the room and got everything laid out and ready for the race the next day. We were all dressing up as fairies! 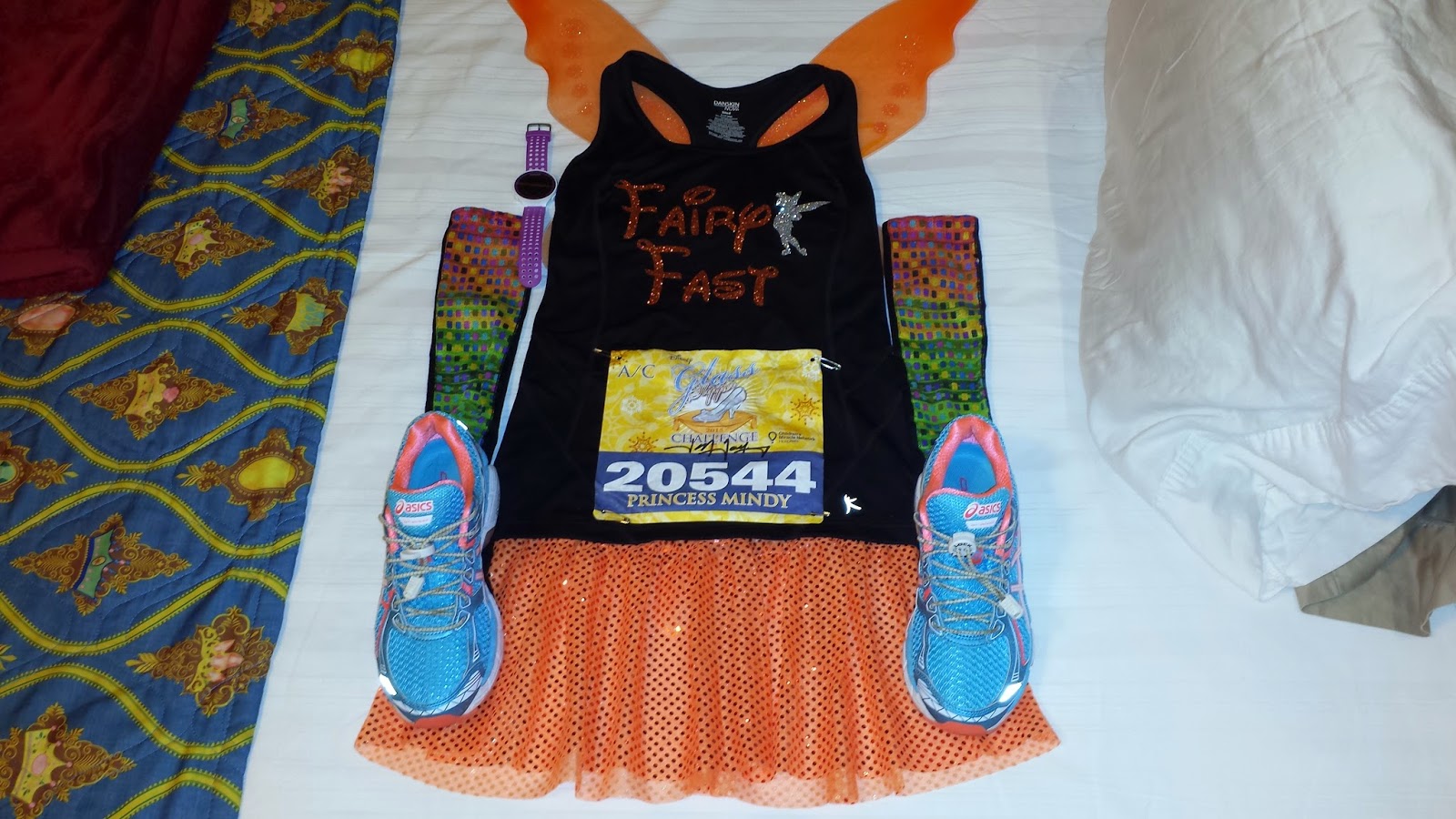 Stay tuned for my recap of the Princess Half Marathon!

QOTD: What is your favorite ride at Hollywood Studios?