I'm still reveling in all the fun I had in Disney! It's going to be a blast retelling it all to you! Today I'm starting with the expo! Disney has the BEST expos you know!

My trip started on Thursday afternoon after work. Me and my friend Sandi decided to drive half way so that we could be at the expo earlier on Friday and so we would be at the airport in time to pick up our friend Brooke. The trip to Disney takes about 8 hours so we drove 4 on Thursday afternoon. It was nice breaking up the trip! We ate a nice dinner that night. And of course I woke up in time to run a mile for my streak before we completed the trip to Disney! 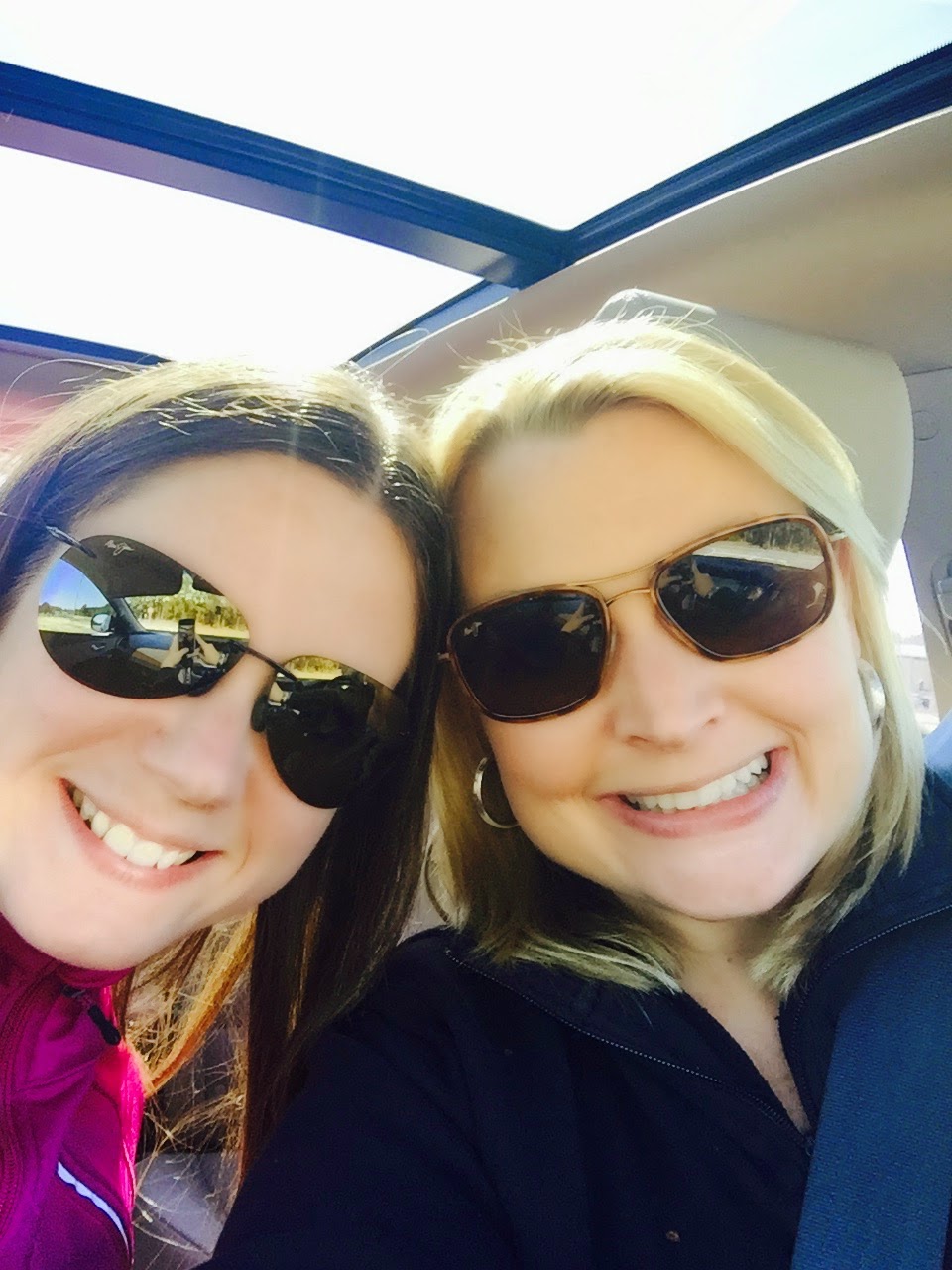 After driving for four hours and picking up Brooke from the airport we finally made it to that magical sign! 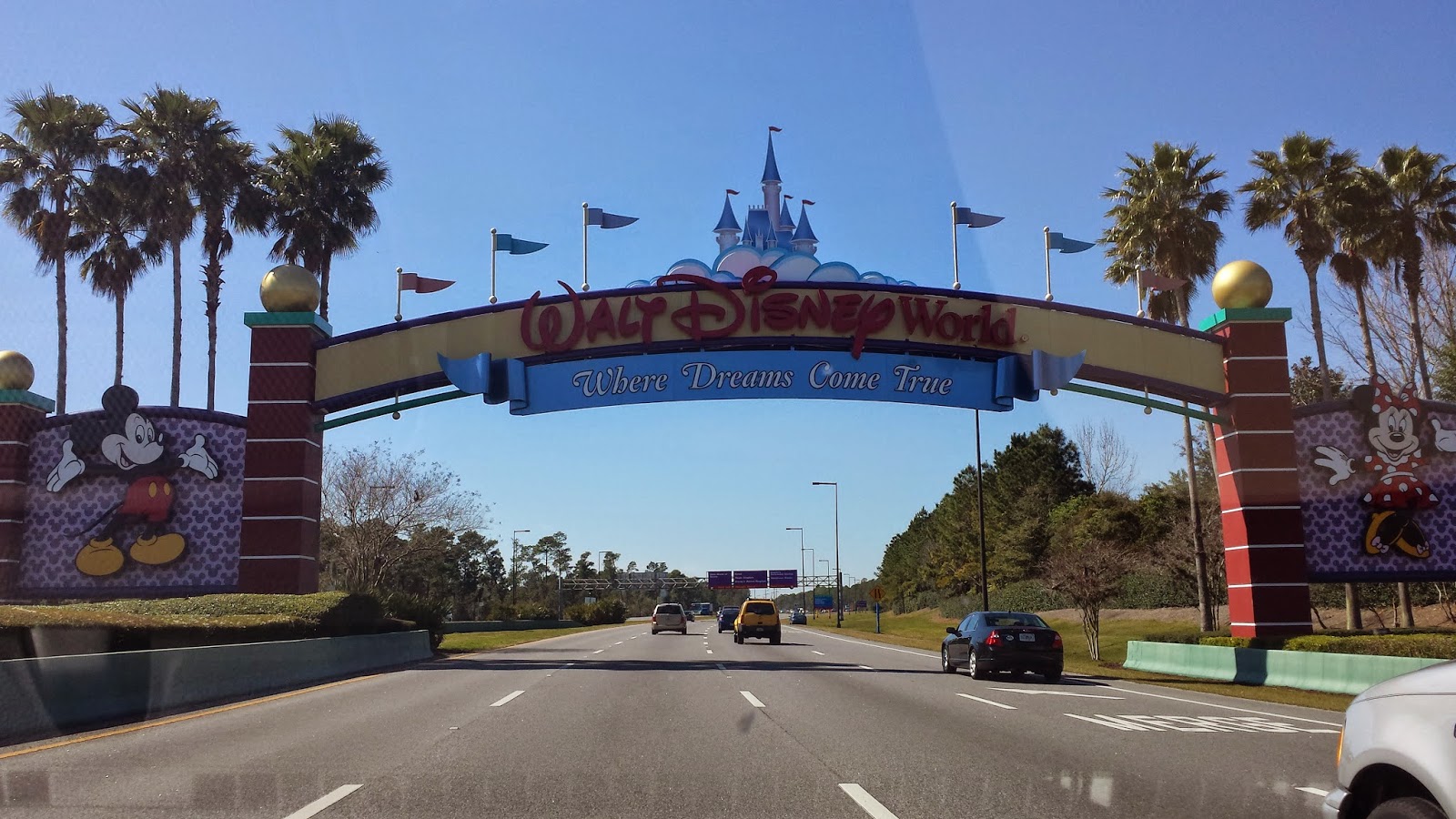 We immediately made our way to the Wide World of Sports complex where the expo was being held. There was lots of traffic going in but as always Disney had the parking organized to a tee and it took us no time to park and be on our way!

First we had to stop for some pictures though. I was running the Glass Slipper Challenge so I had to pose for that one! Then we all three posed for the half marathon! 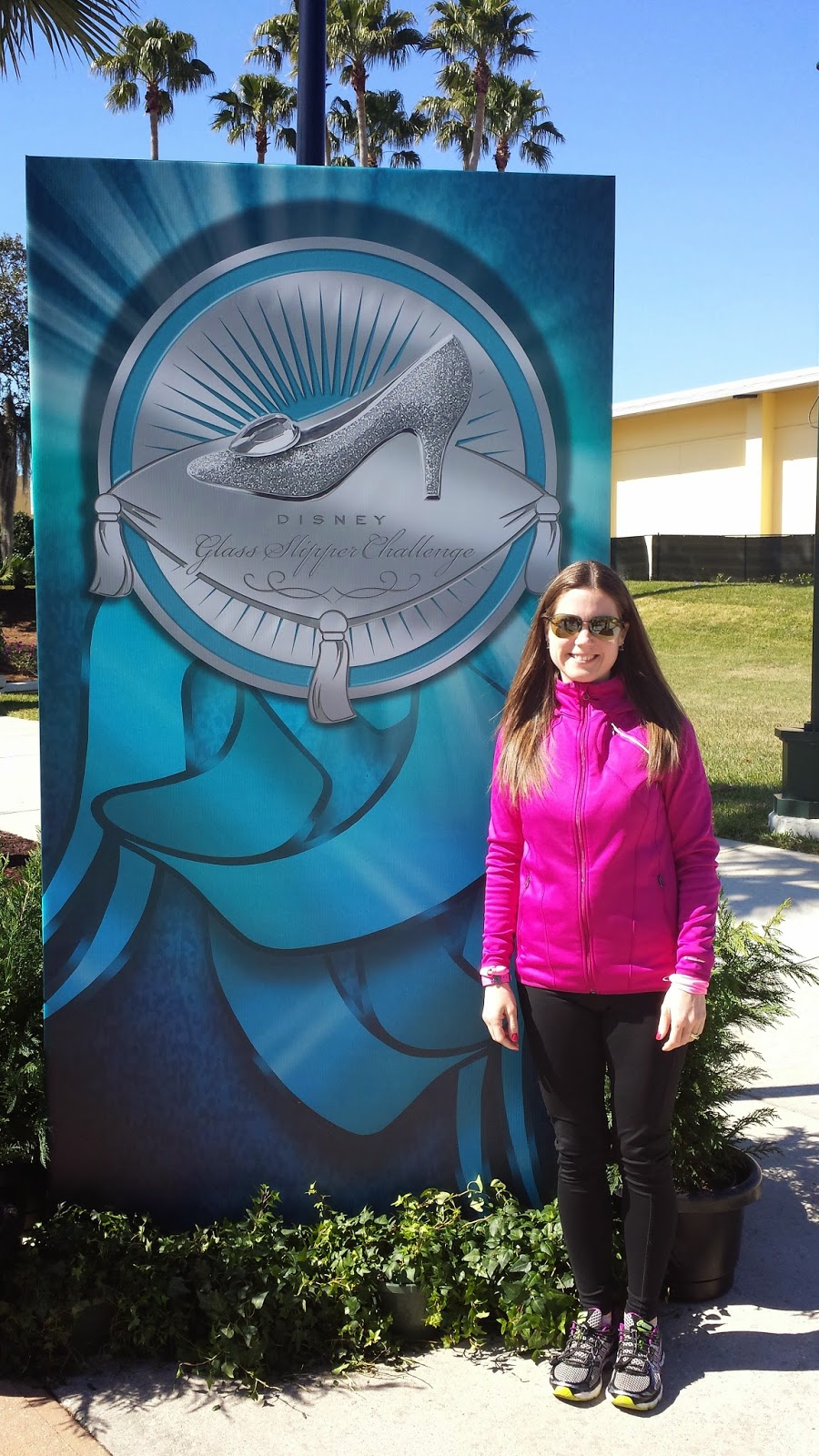 And yes...it was cool in Disney that day. But we had to take the jackets off for some pictures of course! ;-) 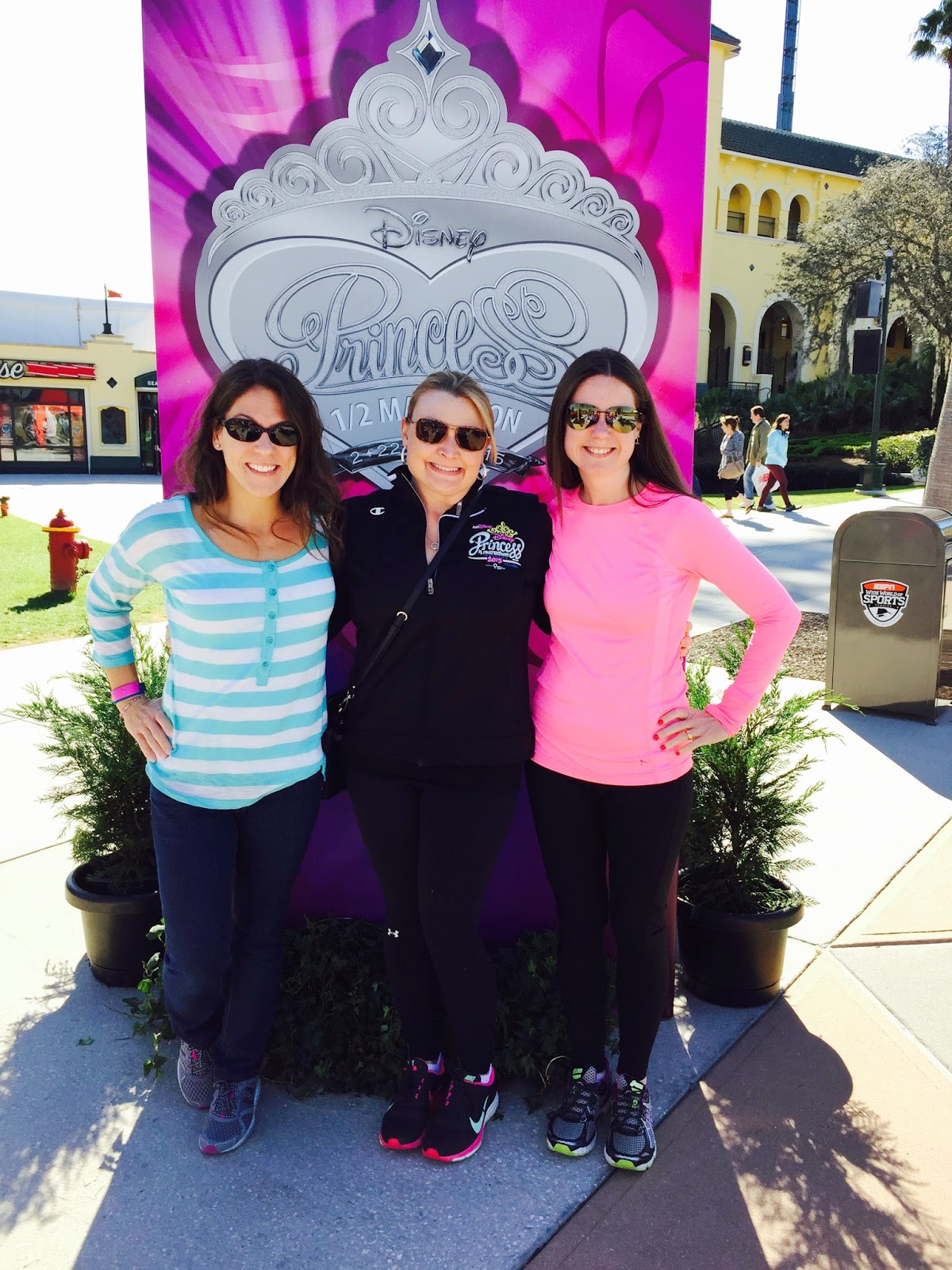 Then we headed to the HP Field House for packet pickup. 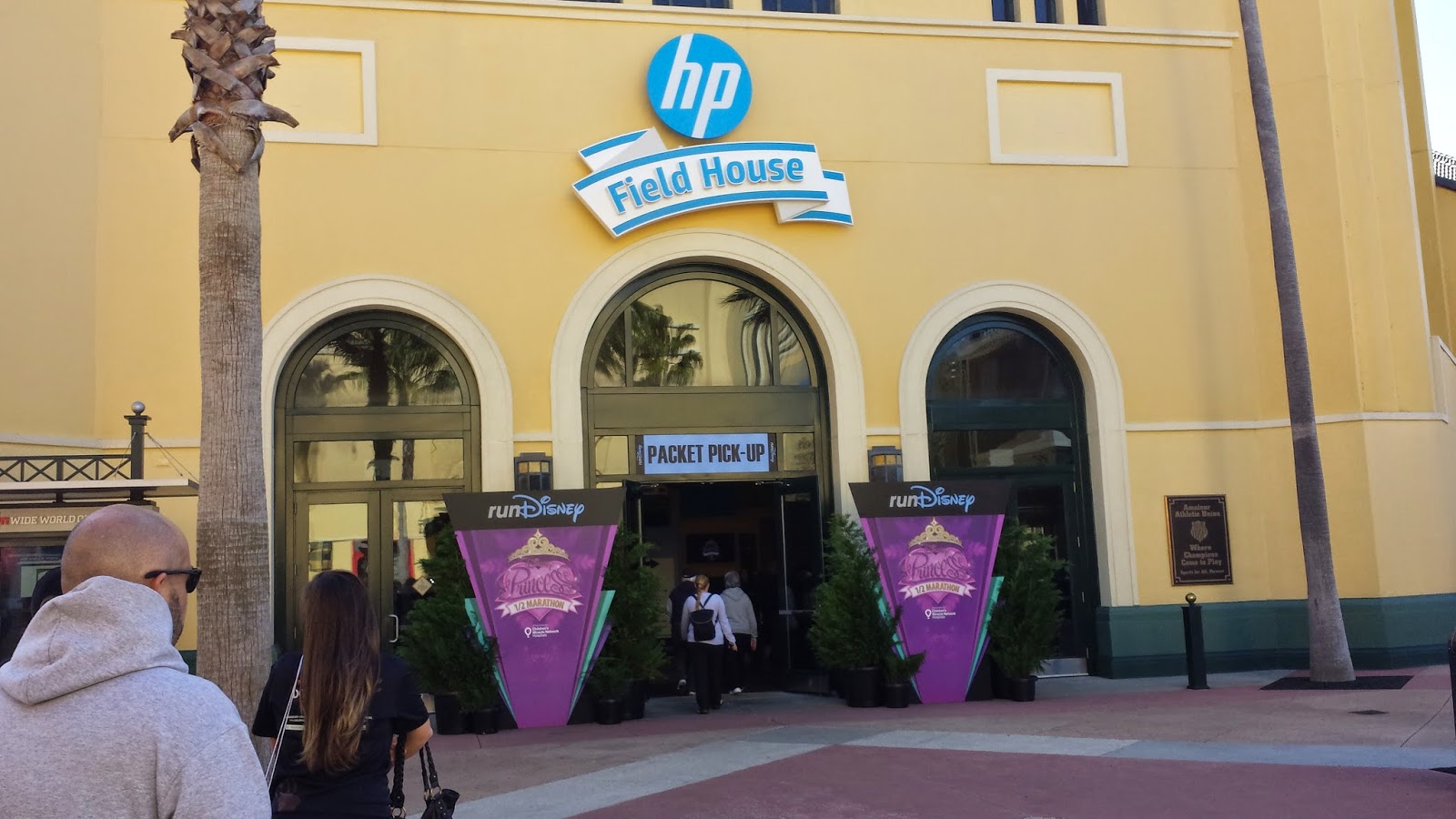 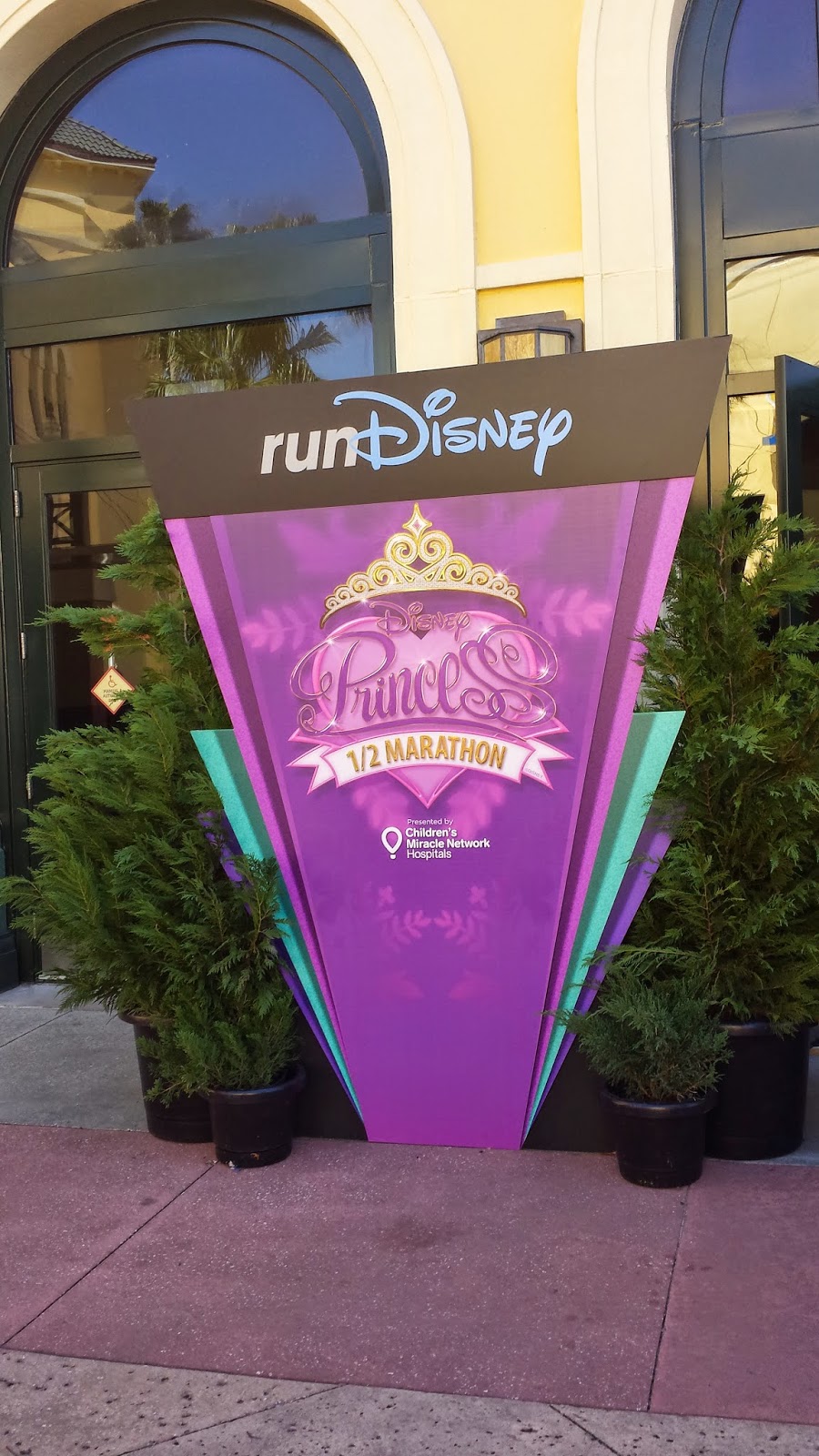 Inside we picked up my glass slipper challenge bib first. runDisney was doing something new this year. If you were running the Glass Slipper Challenge they made you take a picture with your bib for id purposes. It went by super fast...there were about 4 photographers there. And yeah...I wasn't really supposed to take my own photo but the super nice Cast Member said he wouldn't tell! ;-) They used these pictures after the challenge was complete to award you with your Glass Slipper medal. Sure beat wearing those bracelets around your wrist like in past years! 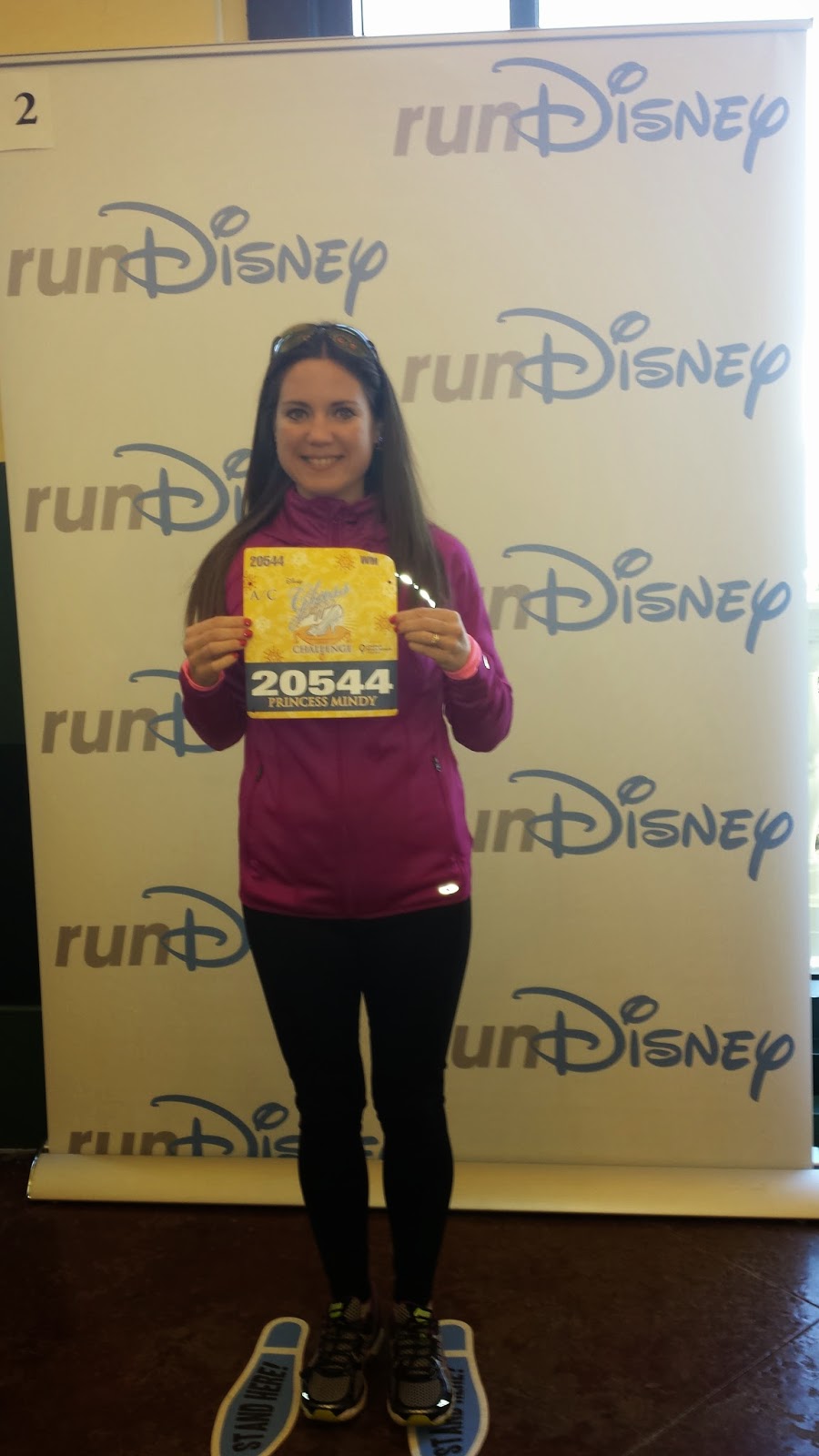 Next we grabbed my friends' bibs for the half. We also had some photo opps with a background of Cinderella's carriage from the new movie! And...the glass slipper from the movie! So cool! 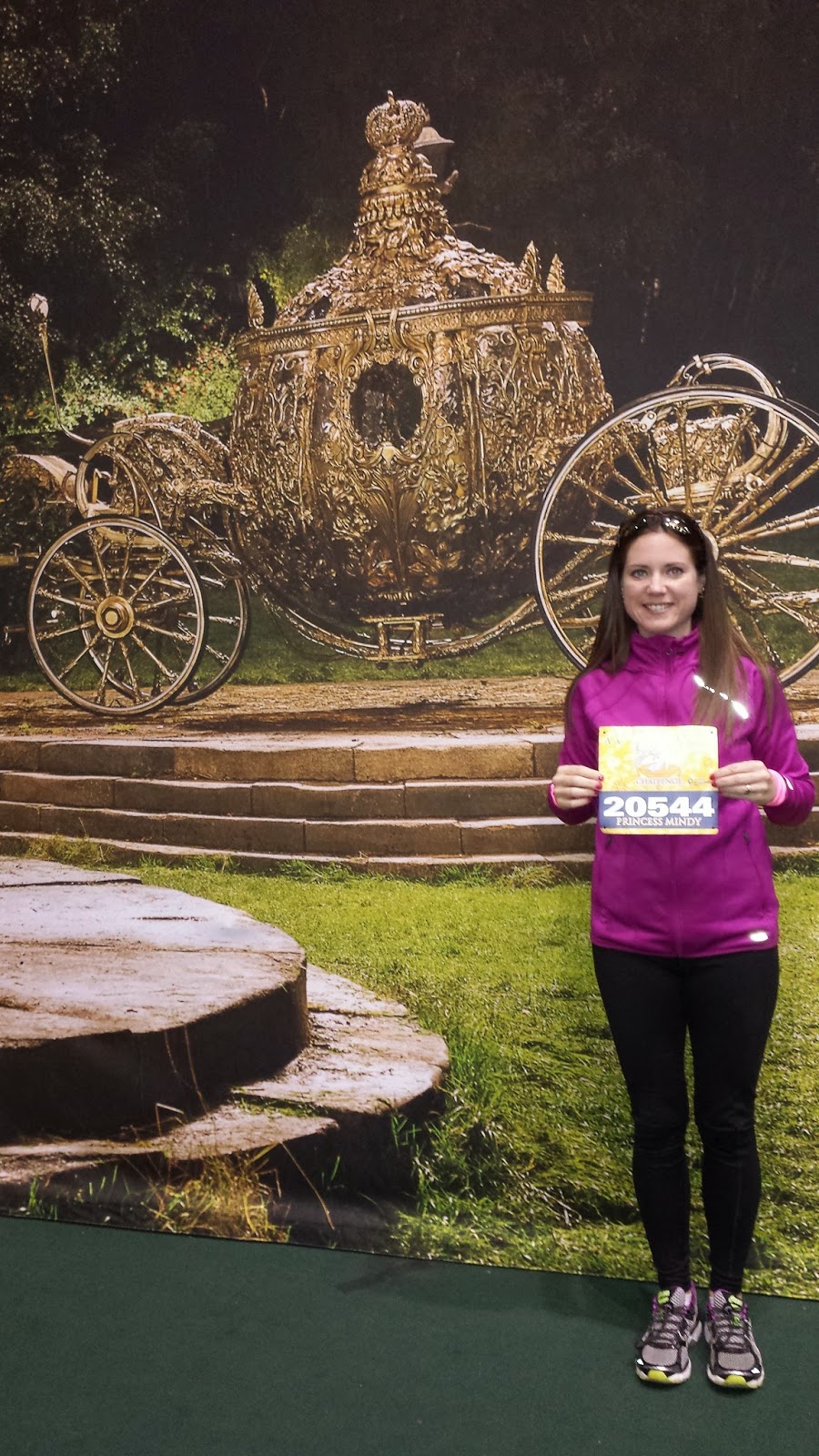 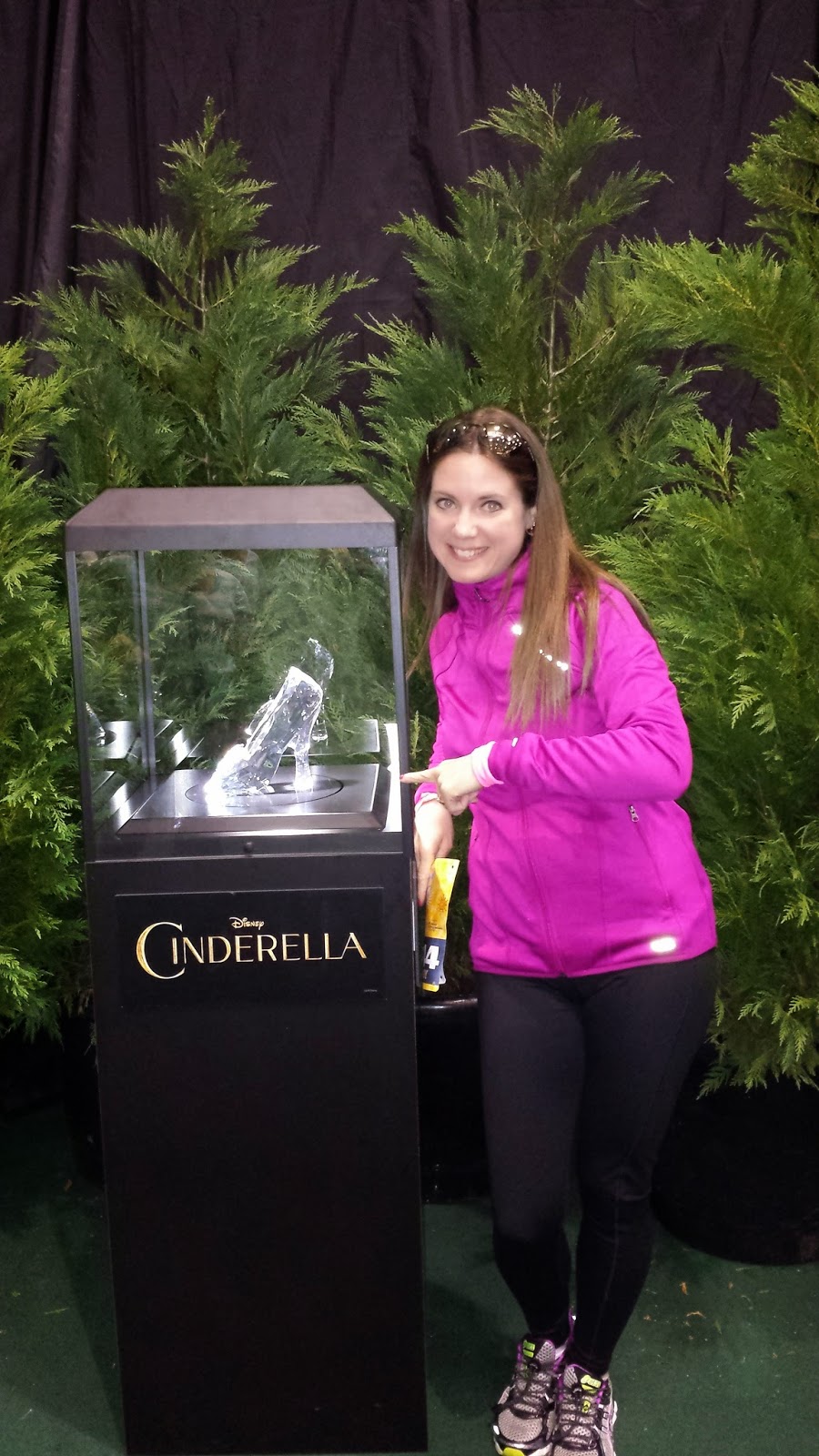 Then it was time to head to the Jostens Center for the race merchandise and expo! Can you say shopping?! But first, since we are princesses, we had to walk on the red carpet! ;-) 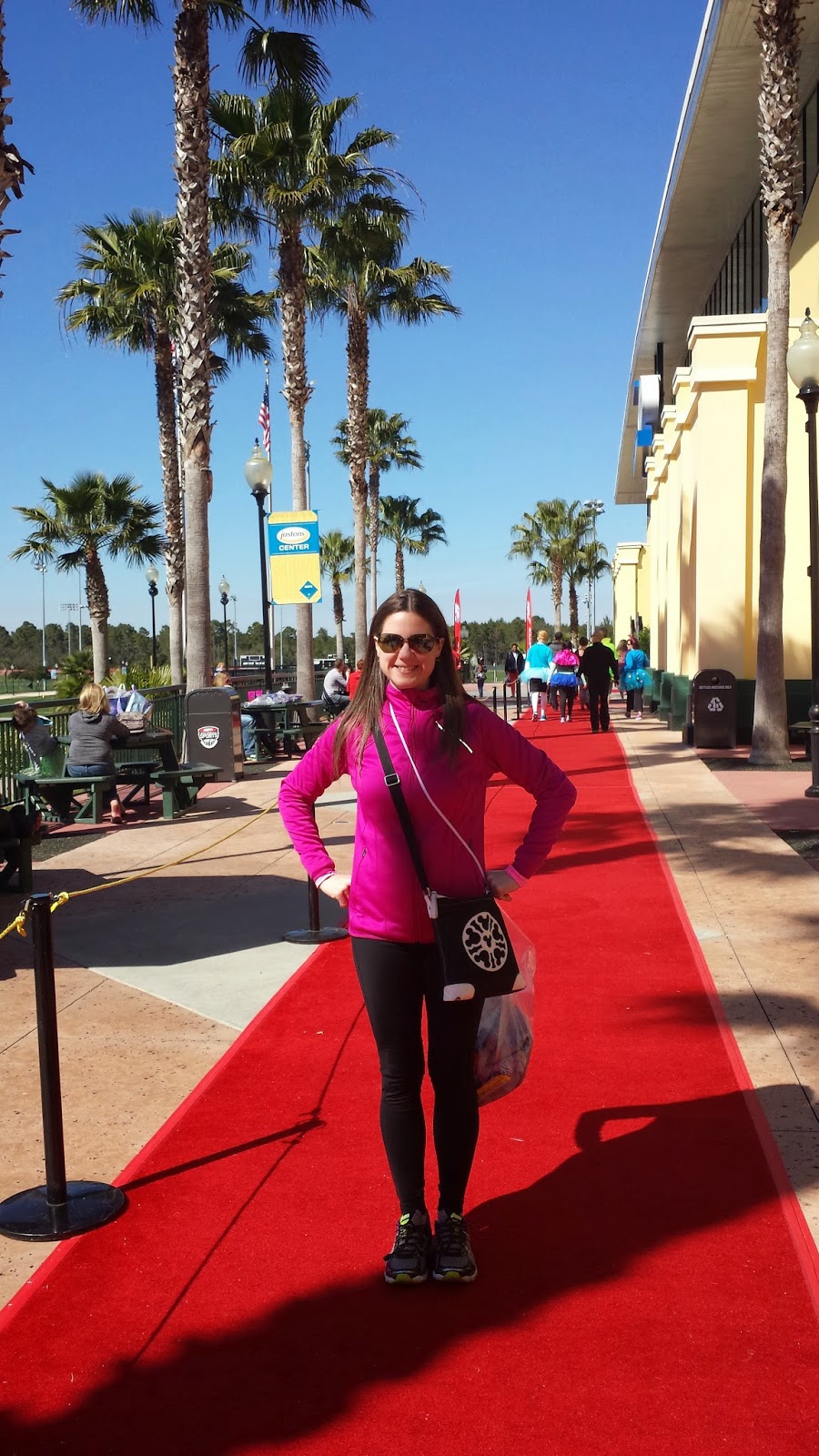 And take a picture with these guys! ;-) 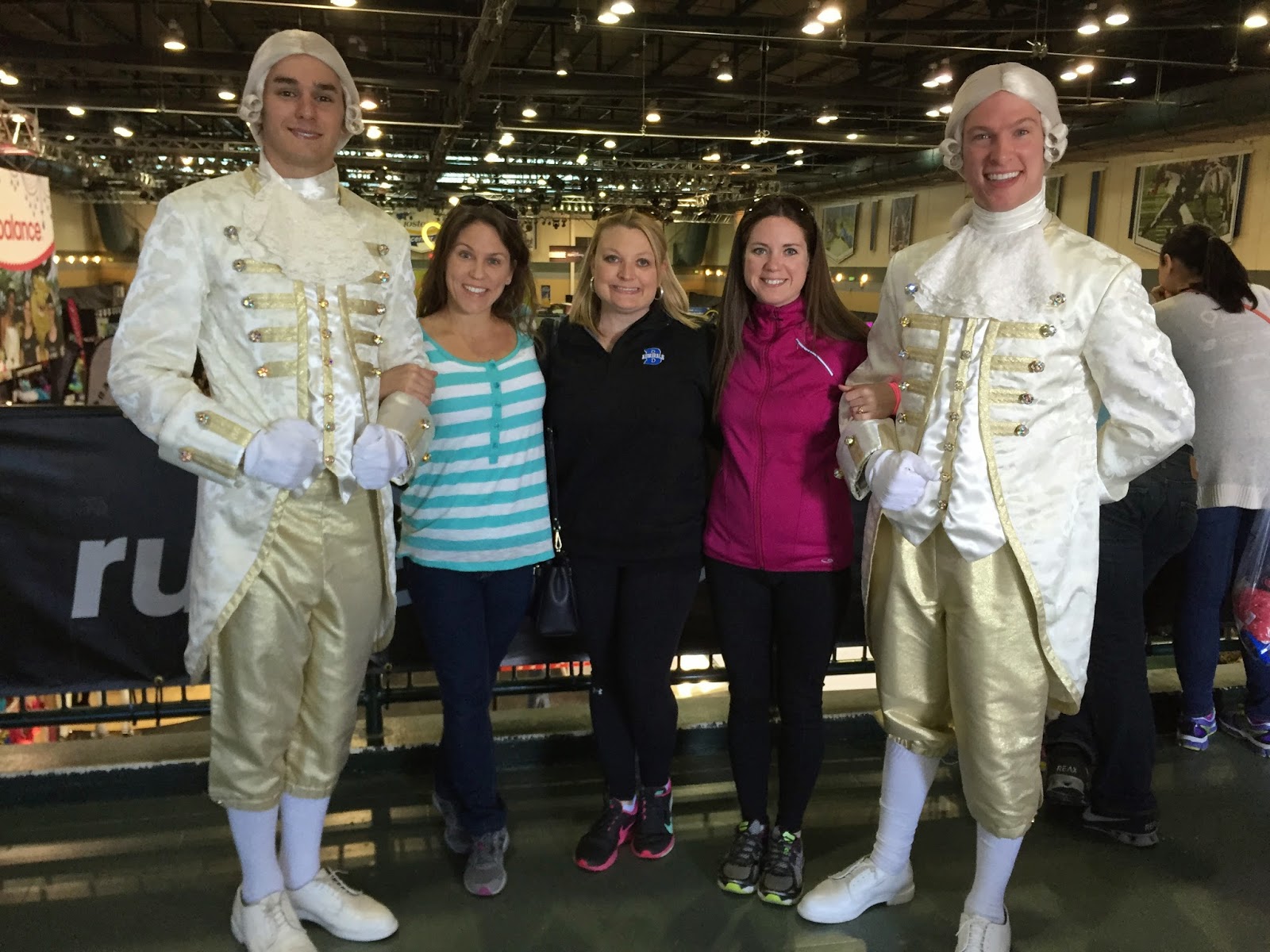 Just look at that expo! I told you runDisney expos are the best! :-) 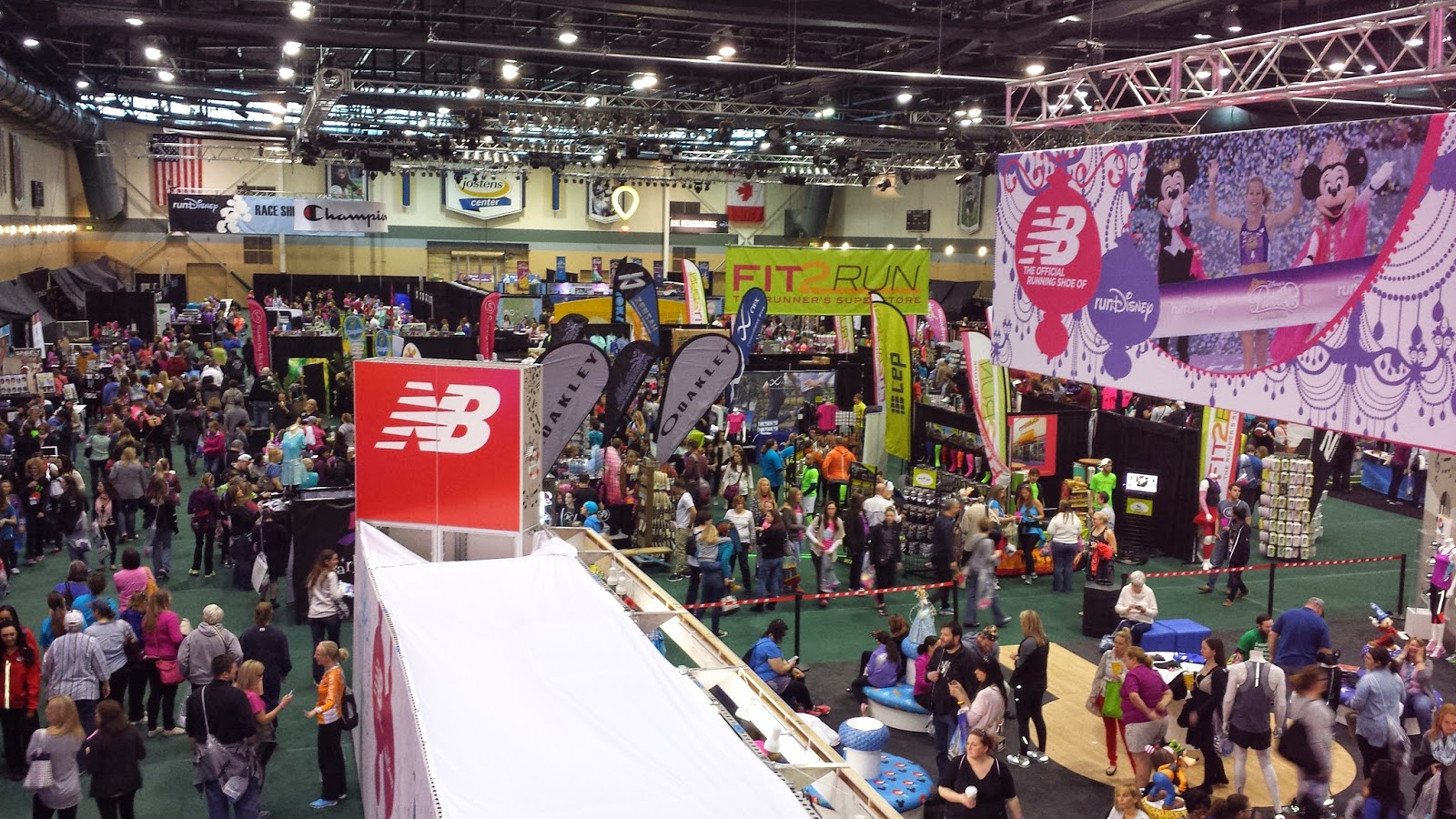 First we headed to the runDisney official merchandise...where I was extremely disappointed. There were no glass slipper challenge jackets left and no coffee mugs left. Luckily I lost weight this past year because all they had left of the "I Did It" shirts were size smalls. So I was able to get 1/3 of the things I wanted the most. This part totally sucks! Disney KNOWS the demand for the official merchandise....why can't they make more so that everyone has a chance to buy it? Very frustrating!

After leaving the official merchandise area we headed to the vendor area. First we stopped by the runDisney booth. My friends got to meet Jeff Galloway for the first time and I got to say hi again since I met him a few years ago at marathon weekend. Remember he signed my bib then? I figured why not start a tradition and had him sign my bib again! 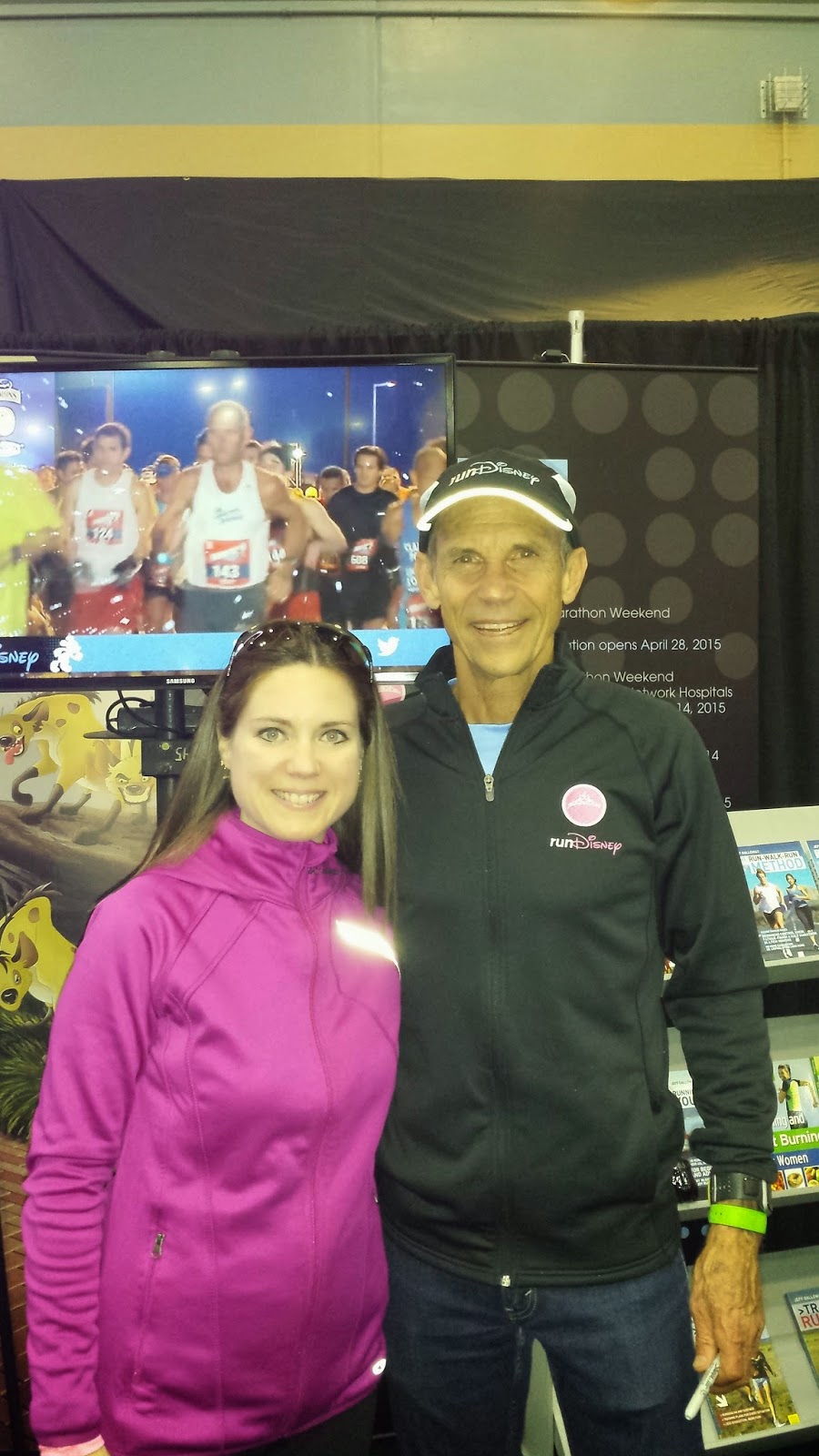 We spent a little more time shopping and then our stomachs growling forced us to leave! We headed to our resort to check in. We were staying at Port Orleans Riverside...and it was sooooo nice! I absolutely LOVED staying there! Our room was in the Oak Manor section of the resort and it was gorgeous! 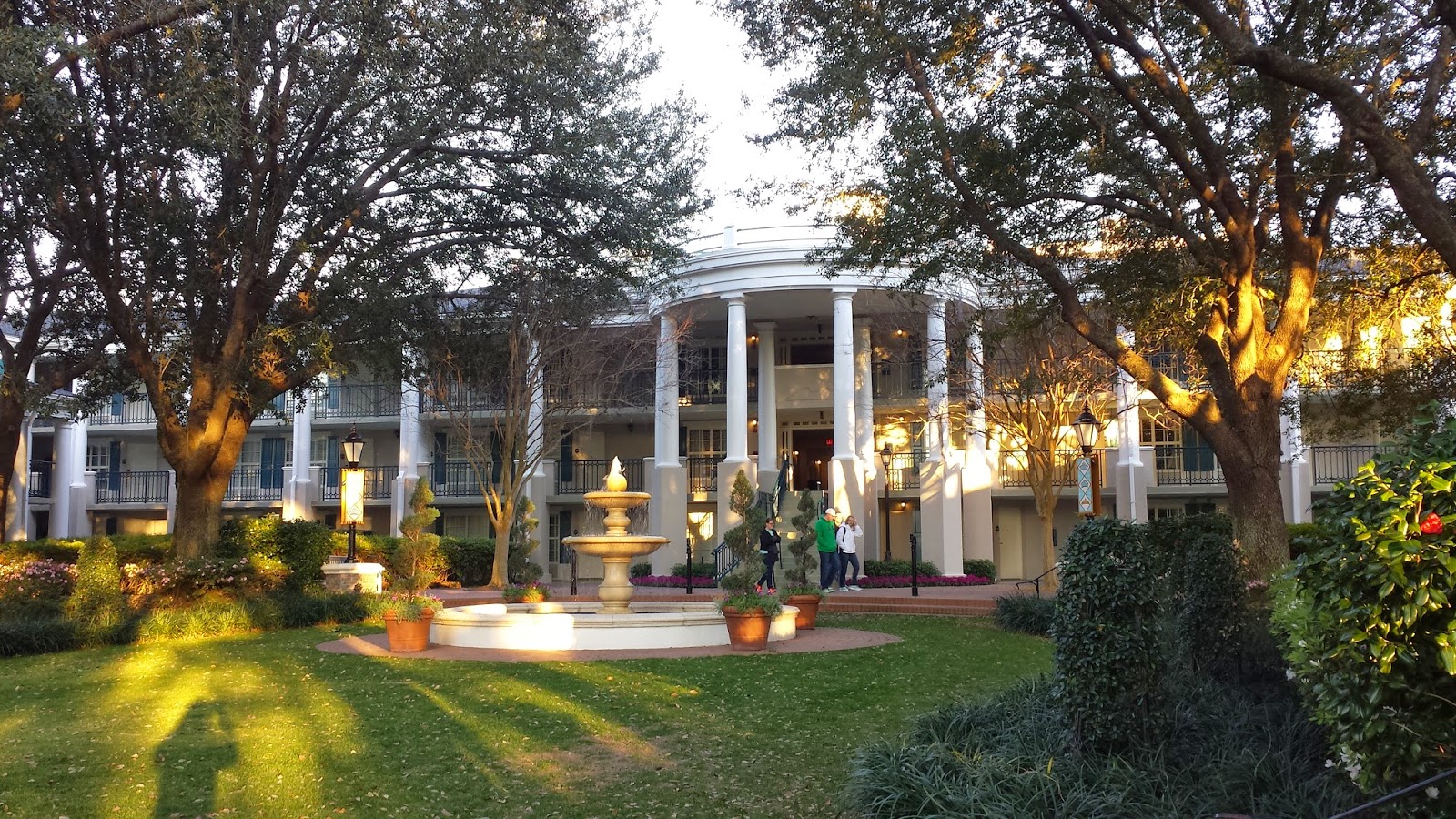 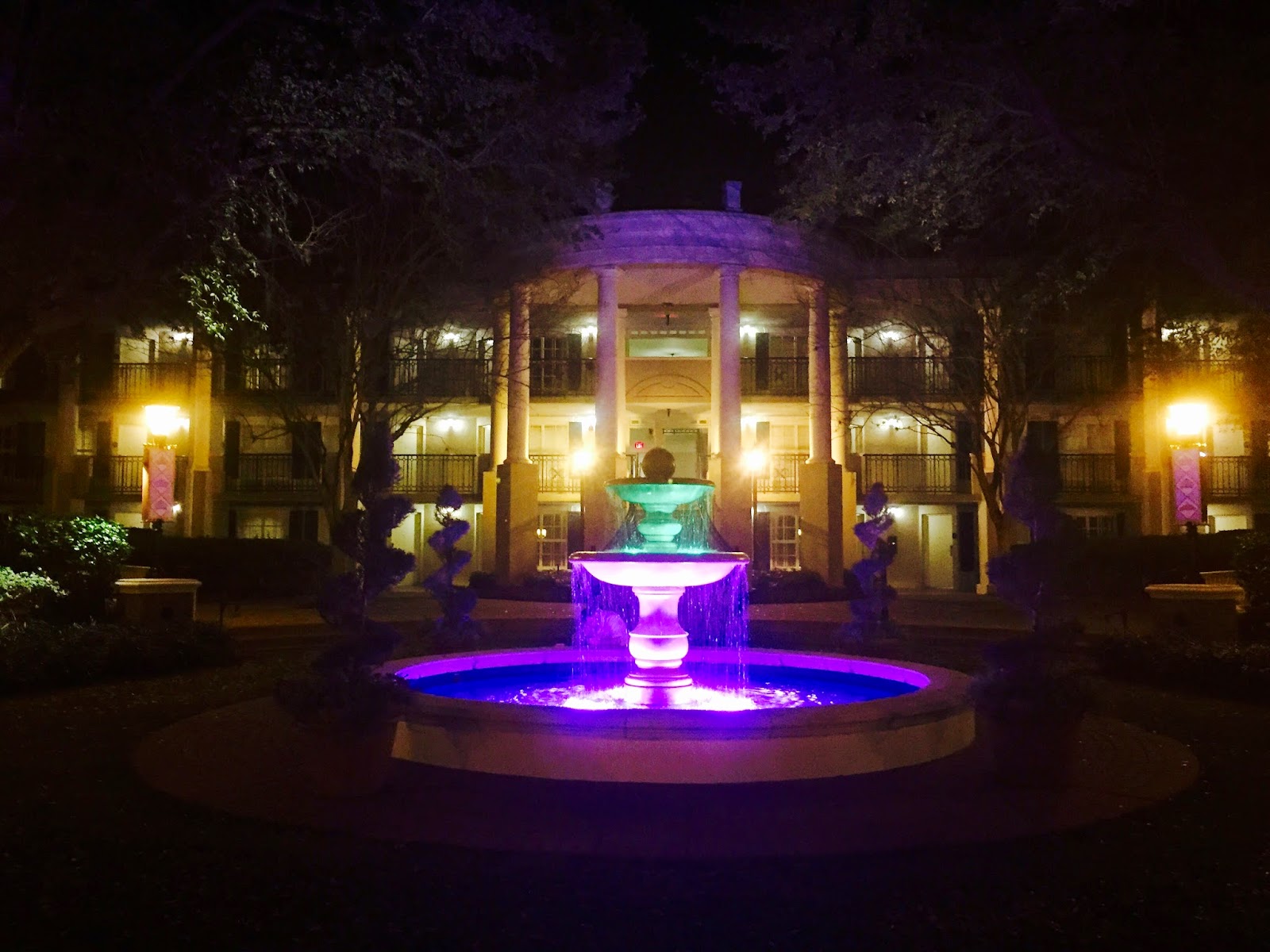 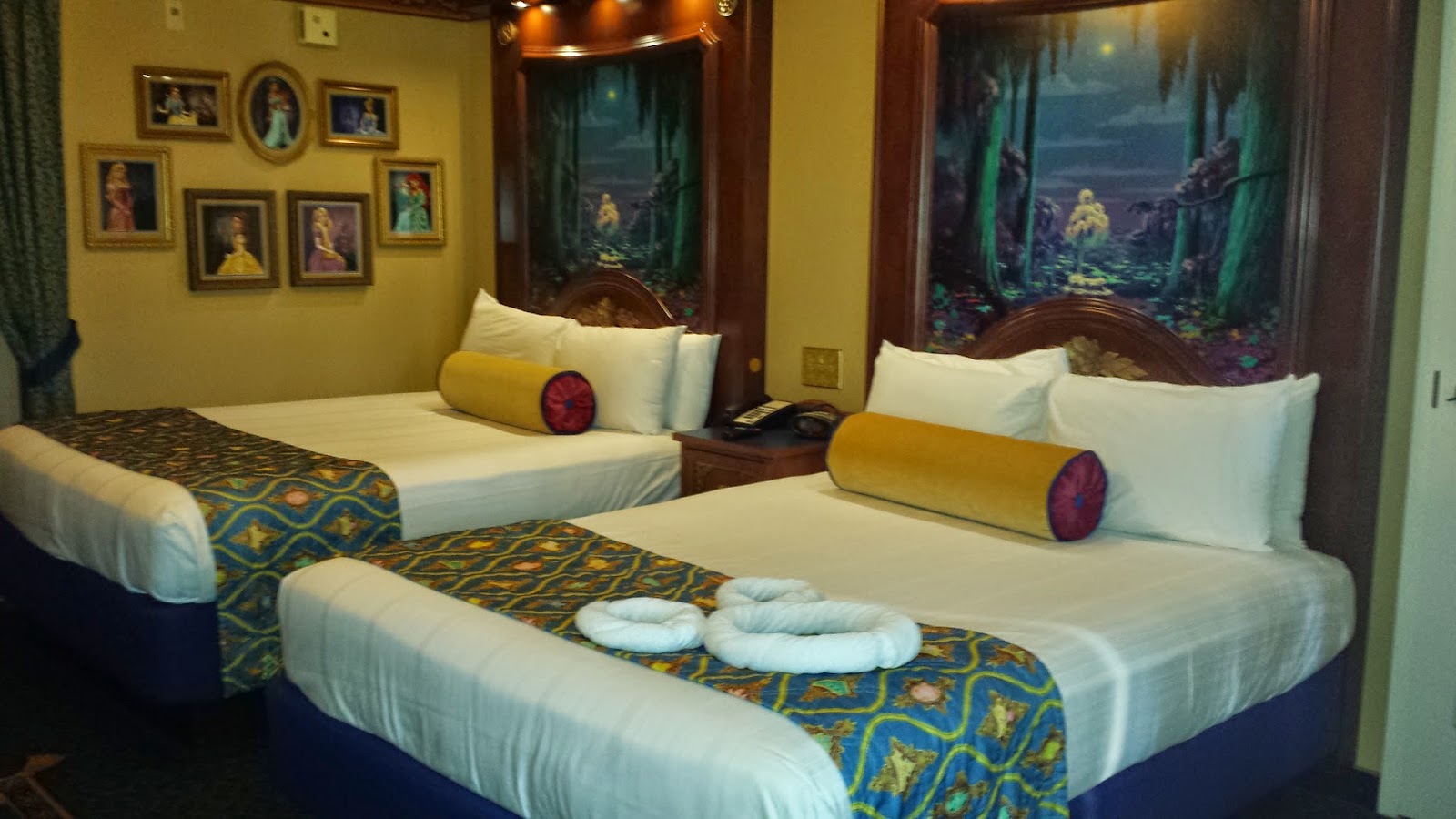 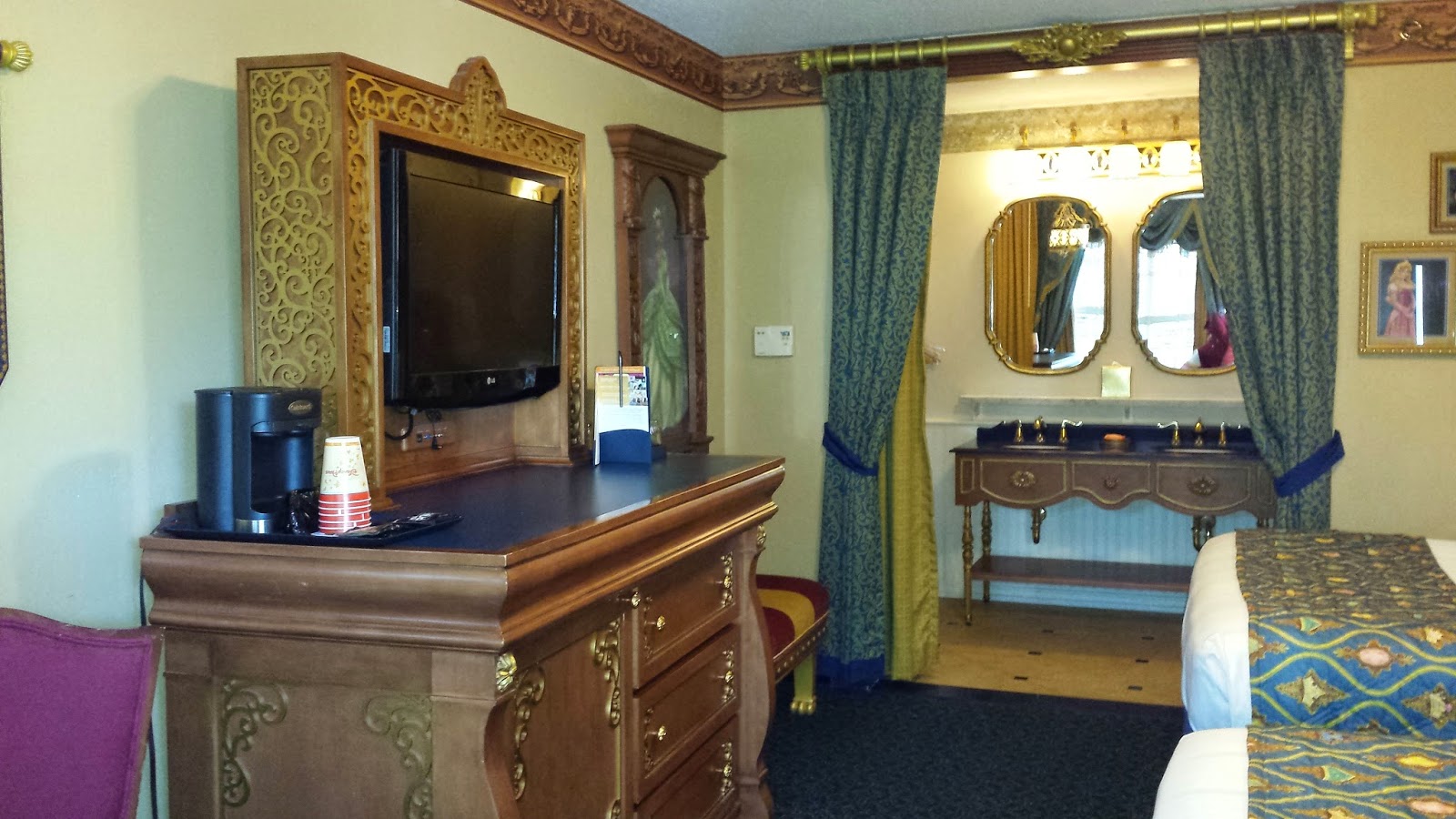 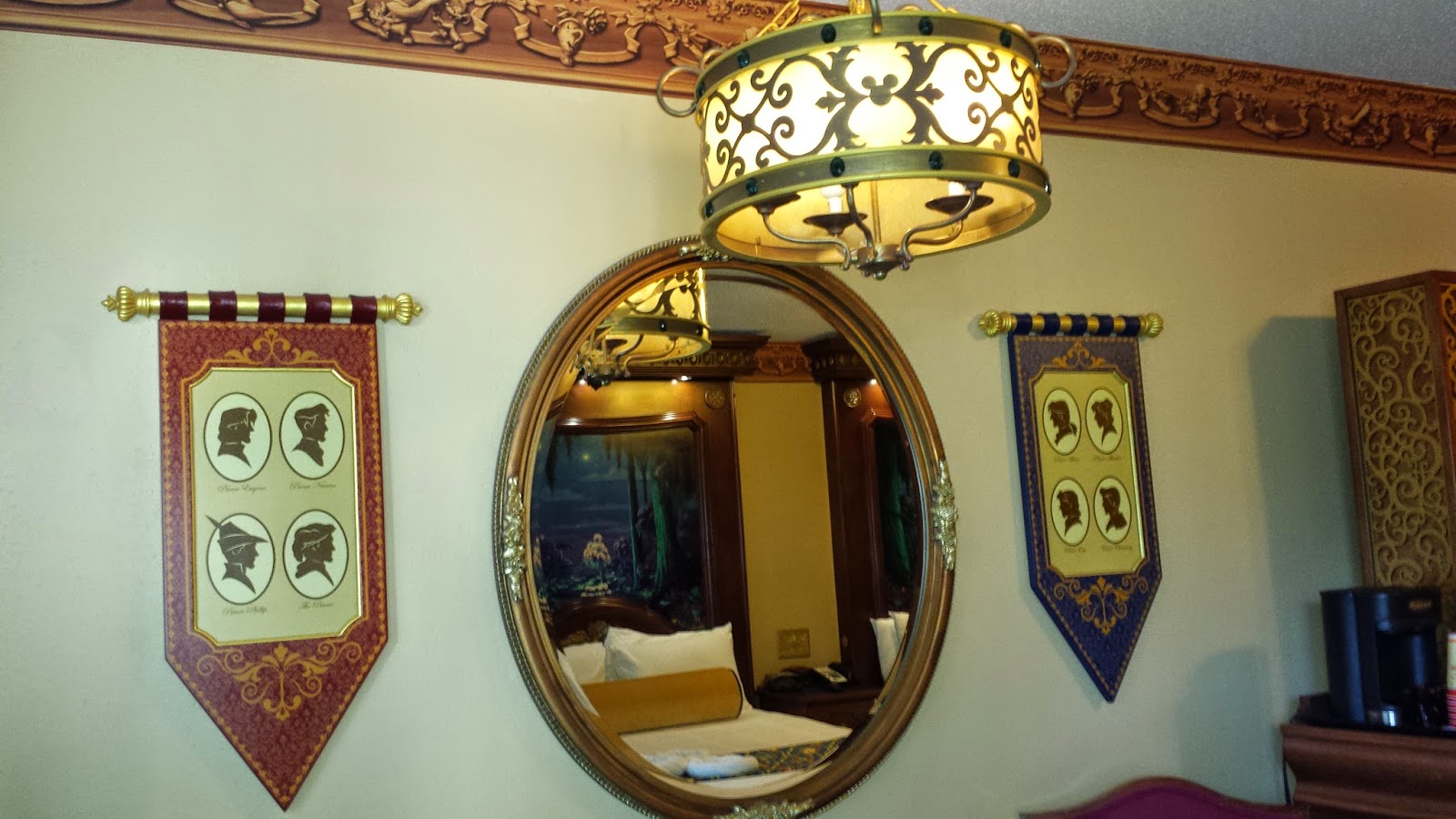 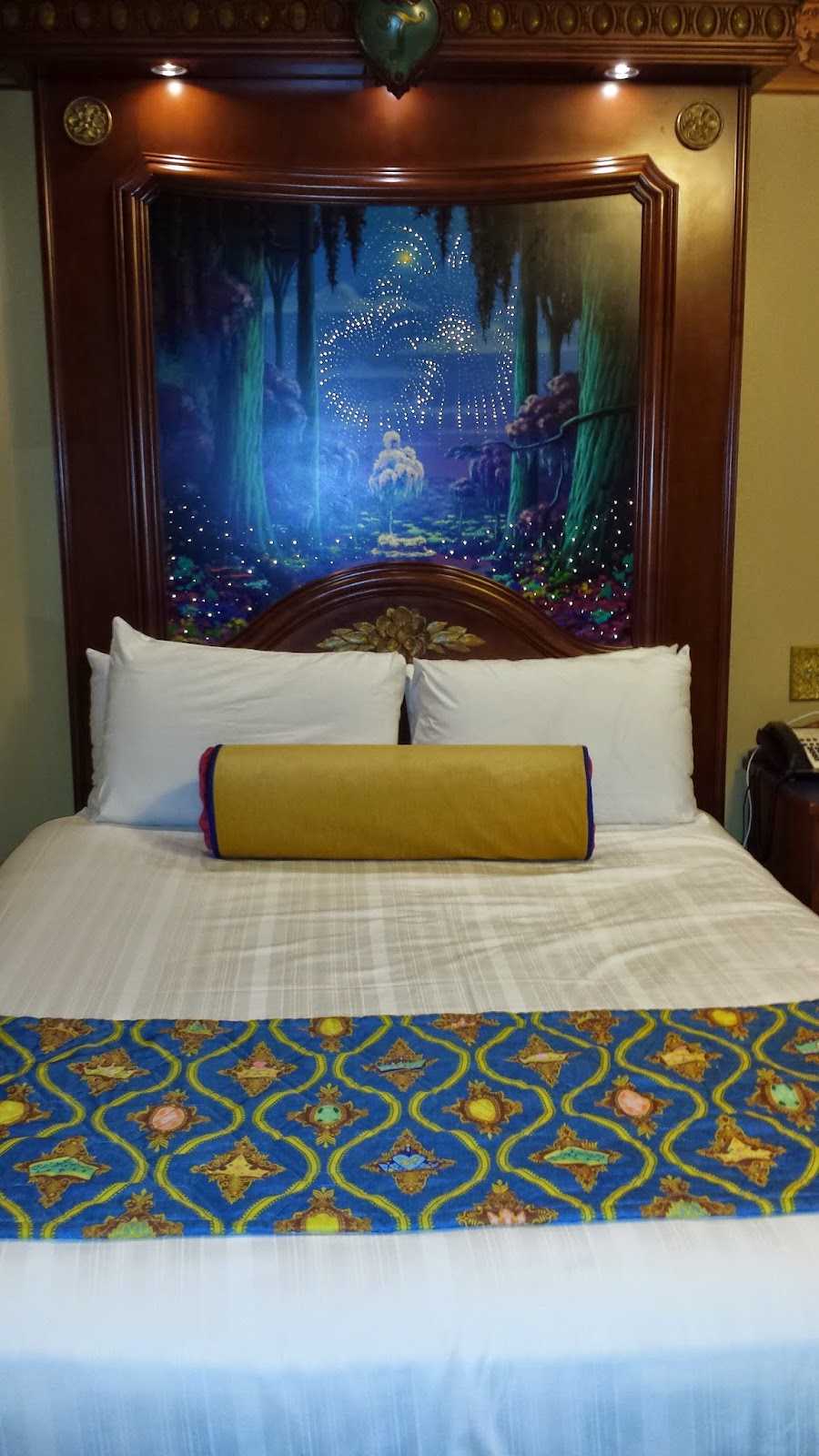 Here were my goods from the expo! I really didn't get much. I was just so disappointed about the official merchandise being gone so fast! 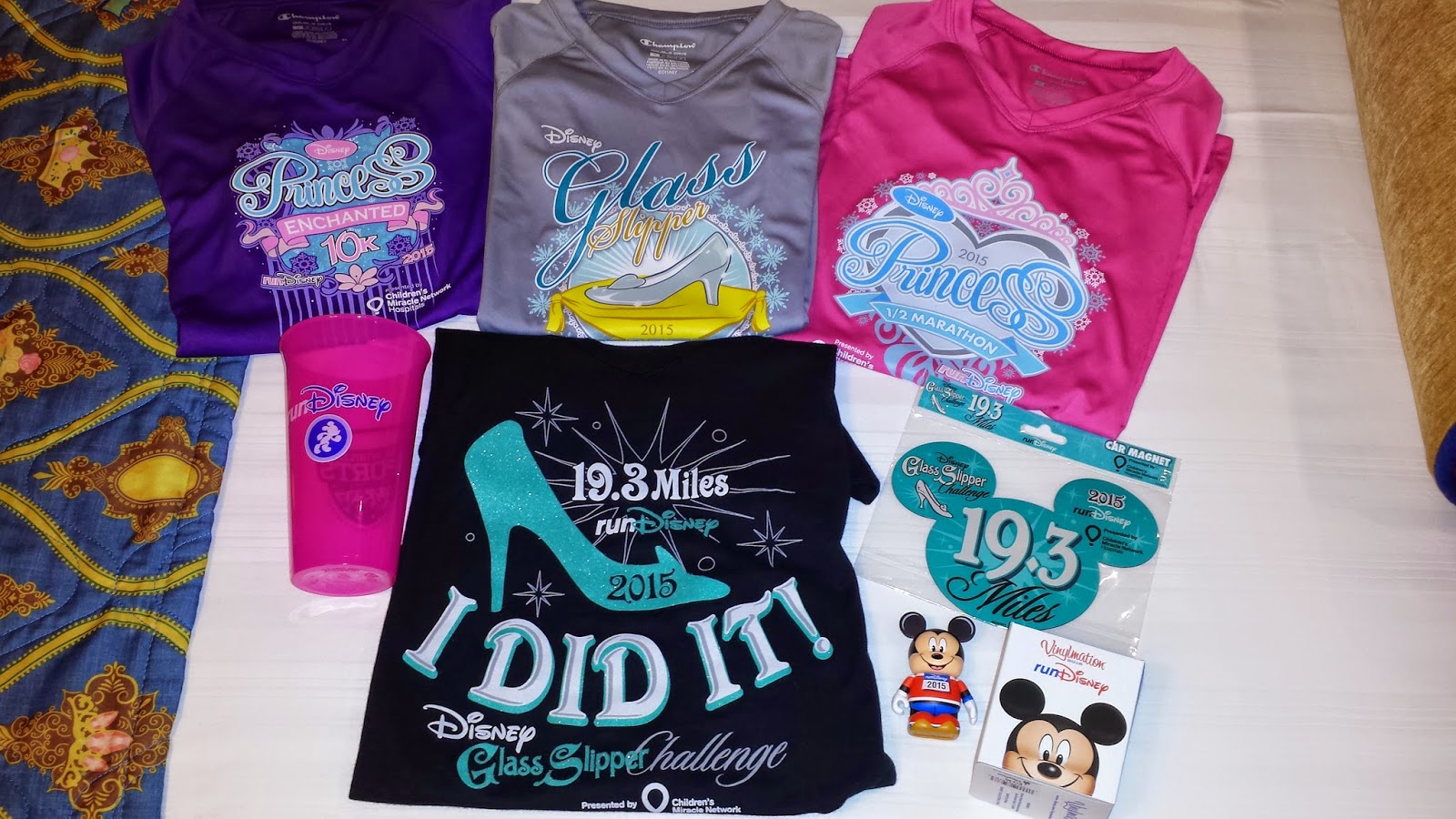 After settling in a bit we headed to Downtown Disney where we had dinner reservations at Planet Hollywood. It was super easy to get there....we just hopped on a boat and it took us straight there! The boat ride was super chilly though. My friend Susanne finally made it into town and met us in time for dinner. I got Chicken Marsala and veggies and it was so yummy! I was hoping the potatoes would be enough carbs to get me through the Enchanted 10K the next day! 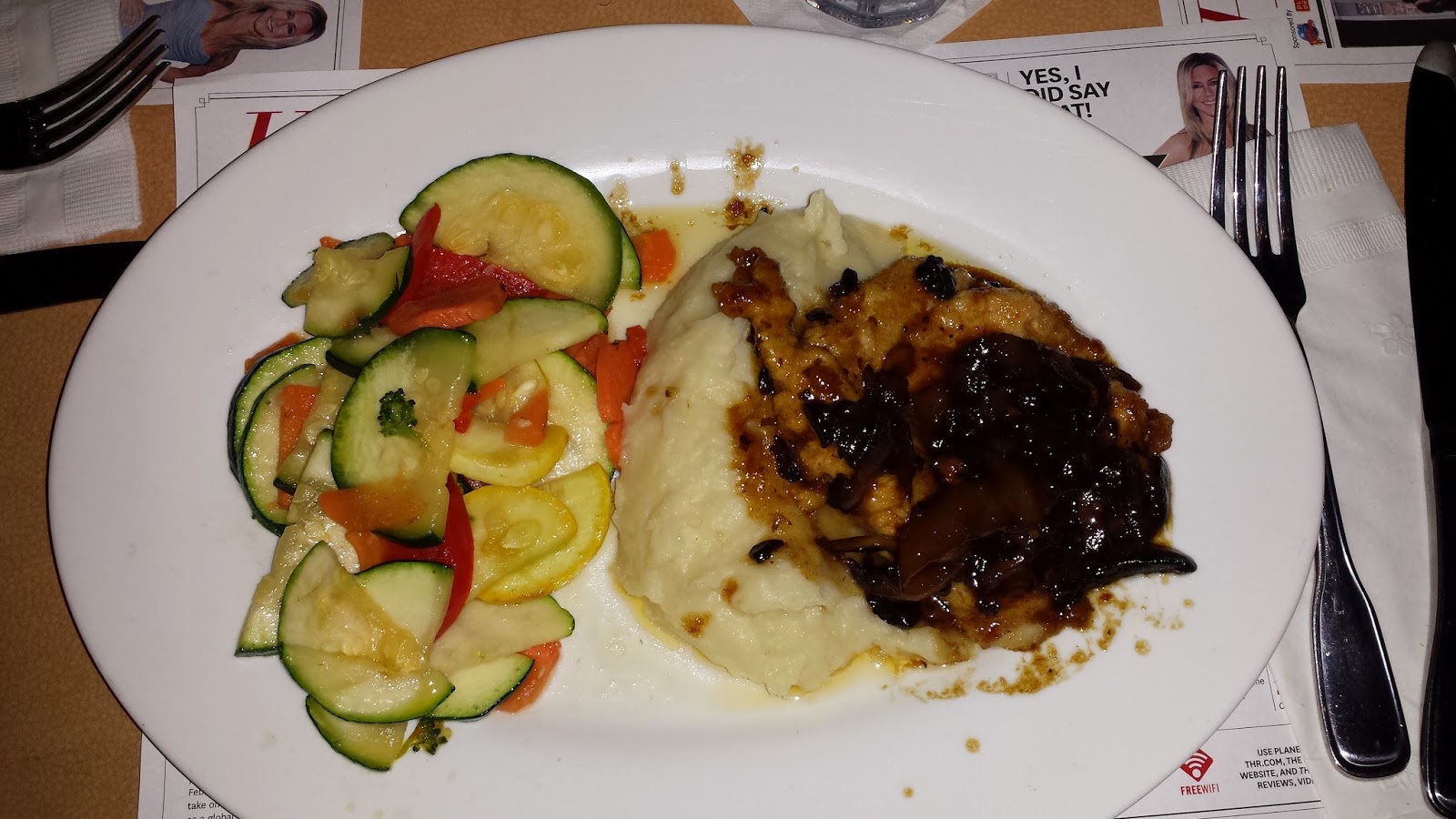 After dinner we piled in Susanne's car to head back to the resort so we wouldn't have to ride the chilly boat again. I would be getting into bed way later than I wanted for that 3AM wake up call. But who sleeps in Disney anyway, right??!!

Olaf was ready to run the  Disney Princess Enchanted 10K! 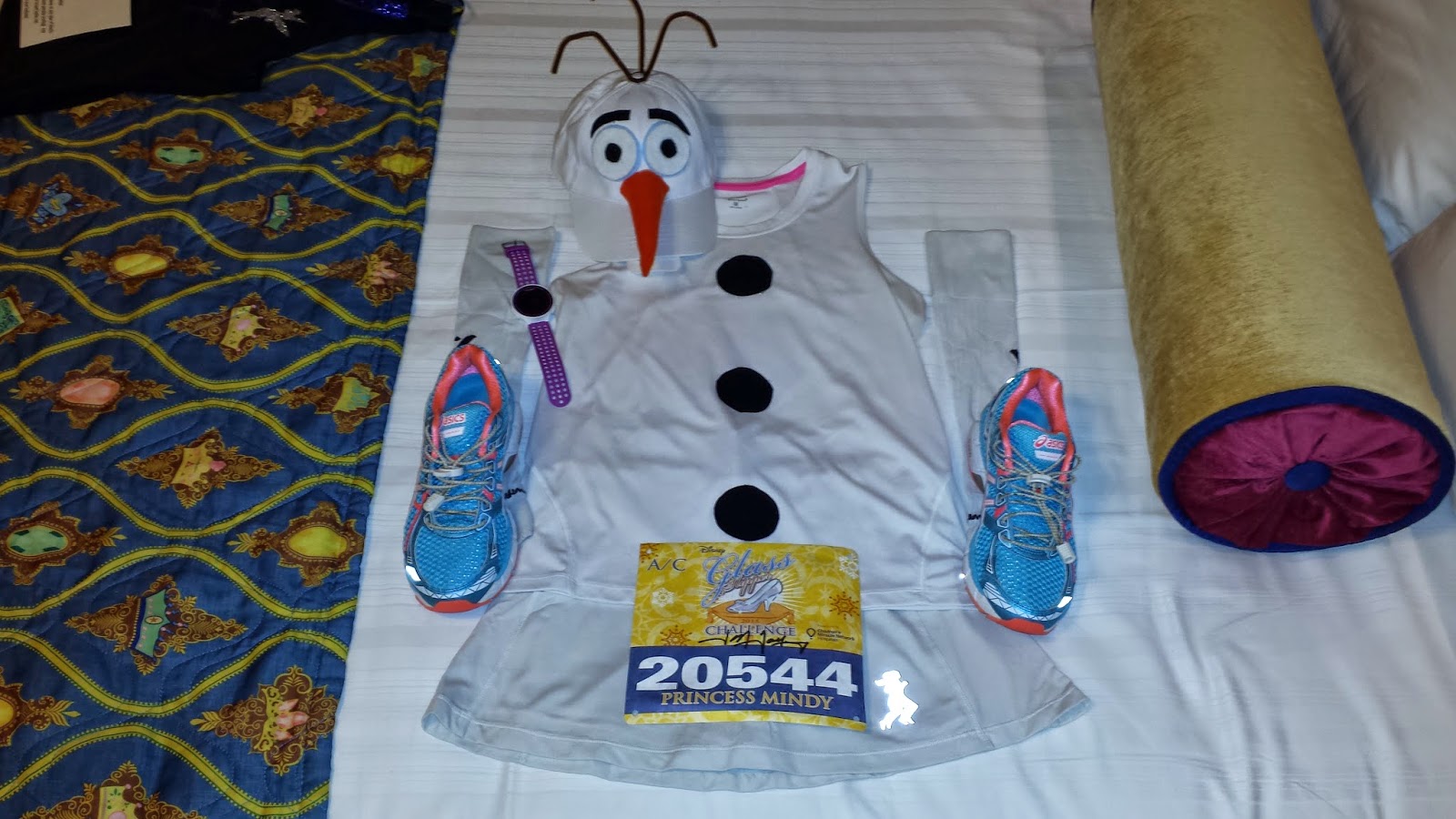 I ended up having to wear my black tights and a long sleeve shirt under my tank because it was pretty cold the next morning. But I'll save that recap for next time! ;-)

QOTD: What resorts have you stayed at on Disney property? What's your favorite?