This past Saturday was my last long run for Disney Marathon training. 22 miles was on the schedule but my plan was to run only 20 since I've been recovering from this knee injury. The last really long run I've done was 18 miles...and that's the run the knee starting hurting on. I took a complete week off and then ran 10 miles the following week...and the knee was still hurting. So I decided to go see a chiropractor (which was the best decision!) and he advised me to take the next two weeks off from running. That resulted in me missing my scheduled 20 miler... but I was still able to run the Woman's Half Marathon the next weekend. And although the half wasn't my best, I still ran and felt pretty good.

So my last long run for training was upon me and I thought I could do it no problem. Yes I may have to walk some but that's ok. In fact, Dr. Justin told me to run/walk it. I was just happy to be able to hit the pavement.

My friends I am training with decided we would walk the first and last mile and run 20. That worked out perfect for me since I had only planned on running 20 anyway.

And that's how the next 10 miles went for me. I would run a little and then I would have to stop and walk. I felt horrible because some of my friends stopped with me and I hate holding anyone back. But the only reason I would start running again was when she said, "Ok let's run now." She basically had to push me into running again.

The best part of this run...the gorgeous sunrise I got to see!!! 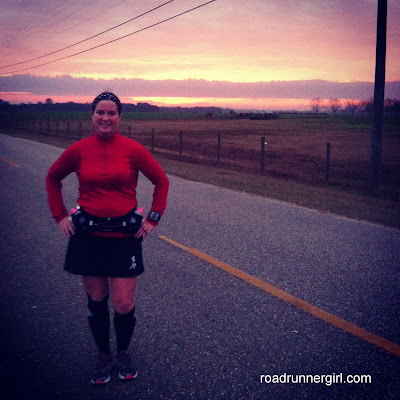 Around mile 12 we had a few more girls meeting us to run the last miles with us. This is where things got super bad for me. My angels for the day were Kay and her dog Cody. Kay said they would walk some with me. We walked about a mile and a half and then started running for half a mile before we stopped for water. After that water stop (at about mile 14) I never ran again. I couldn't make myself. I had absolutely no energy to run...and I was even having a hard time walking. But Kay and Cody stayed with me the entire run...she gave up her run to walk with me!!! What an awesome person and friend!!!

I kept telling myself I needed to get in the miles...even if they were just walking miles. Every part of my body was aching. My hips were hurting, the backs of my quads were hurting, and my feet were killing me. I just wanted to quit right then and there. What was wrong with me? Why was I having such a hard time with this run? Or walk rather? I knew taking time off for my knee would hurt my endurance a little but never did I think it would hurt it this bad. And last week at the half marathon I was able to run!

One of the other girls, Shelbie, told us she was going to run back to her car. I told her we would be walking the route...and if she didn't mind would she PLEASE pick me up in her car and give me a ride home? That's how hard this was for me. NEVER have I quit a run but I just didn't think I was going to make it. Kay and I made it to mile 18 and then Shelbie pulled up. I didn't hesitate. I jumped in her car. We drove about a mile or two and came upon the other ladies training for the marathon. They were walking too...and they said this run was super hard. We asked if they wanted a ride but they turned us down and were determined to finish. That's usually me...but for some reason...I didn't have it in me. I couldn't finish.

I got home and my hubby was a little surprised to see me. He was like, "You're done already?" Yeah. That started the waterworks. I started boohooing and told him I didn't finish. I only made it 18 miles and most of it I walked. He (being the awesome hubby he is) told me I did great considering I had taken time off and was injured. But I was still devastated. I felt like a failure. I had a goal of 20 miles and I couldn't do it. FAIL.

And the doubts began. Would I be able to run this marathon in 4 weeks? Would my endurance come back? Could I even walk the marathon if needed since I couldn't walk the 20 miles today?

And I got mad. My training was going great until this knee issue. My 18 miler was one of my best runs but then my knee started hurting. Why? This was my dream race...26.2 miles in the most magical place on earth. Why was this happening to me???

After crying and having my pity party I felt a little better. I am still determined to run this marathon. It will most likely be my last marathon but I am going to do it. Nothing can stop me. Because "I can do all things through Christ who strengthens me." I'm not sure why He's allowing me to be injured and my runs to be lousy but there's a reason. I am going to try to stay positive and be a light for Him.

I woke up Sunday (the day after the run) with a sore throat and stuffy nose. And I had a Christmas musical to sing in that morning. I still sang but had to cough quite a bit during songs. Maybe that is one of the reasons I did so poorly on the run. Because I was getting a cold.

I'll never know. But I'm hoping the next run will be great!

QOTD: Have you ever had a run like this? Do you think I will be able to run this marathon on January 13th?